Well, this is something new. The book went live on Amazon a few days ago, and here I am blogging about it!

The project was an interesting story. Up until I saw a forest literally on fire on the Wyoming/Idaho border, I hadn’t given the idea any consideration. With flames bursting into the air, important business awaited, which was flying around plumes of smoke photographing the scene. About a week later, I saw a mushroom cloud over the border in Idaho, visible from the house. Like a normal human being, I saddled up the PA-11 and took off in the direction of a smoke cloud extending a mile into the atmosphere, chasing more fire. Pyromania aside, there is a theme about western forests, even when they are not on fire. Beetles have ravaged many forests, though not all. Some have burned; many have not. More importantly, for those who haven’t visited the West, the place is not a uniform forest. Density varies tremendously as the West is relatively dry. Its a complex picture, and I realized I had a few pretty pictures that would tell the story rather well. I must also mention that I really enjoyed the process of putting the book together, as it was like flying all over the West again – the scenery is quite moving.

Haze is a known construct in Europe in the summer. A difference between Switzerland at 46 N latitude and Spain at 42 N is the introduction of more summer low pressure zones and fronts, where like the mid-latitudes of the United States, crappy air gets blown downstream occasionally. That being said, the weather kindly did not offer an initial window of nice air, so I decided to accomplish two things: get over all of my reservations about flying here (having to submit an avis de vol to airport authorities before flying, deal with refueling, a new hangar arrangement, Class D controlled airspace, being in the Alps) and secondly, deal with the fact that Lake Geneva and the Chablais Alps sneer at me in the chalet. I can see a two dimensional outline of these mountains across the lake, know that they are rich in texture and dimension, and day in and day out, I cannot see them any better from the same vantage point. So, like a Scottish Highland war cry, it was time to dive into the haze and conquer.

Completely unexpected was the fact that Mt. Blanc (15,774’) was gleaming in the sun, so I went over there afterward. 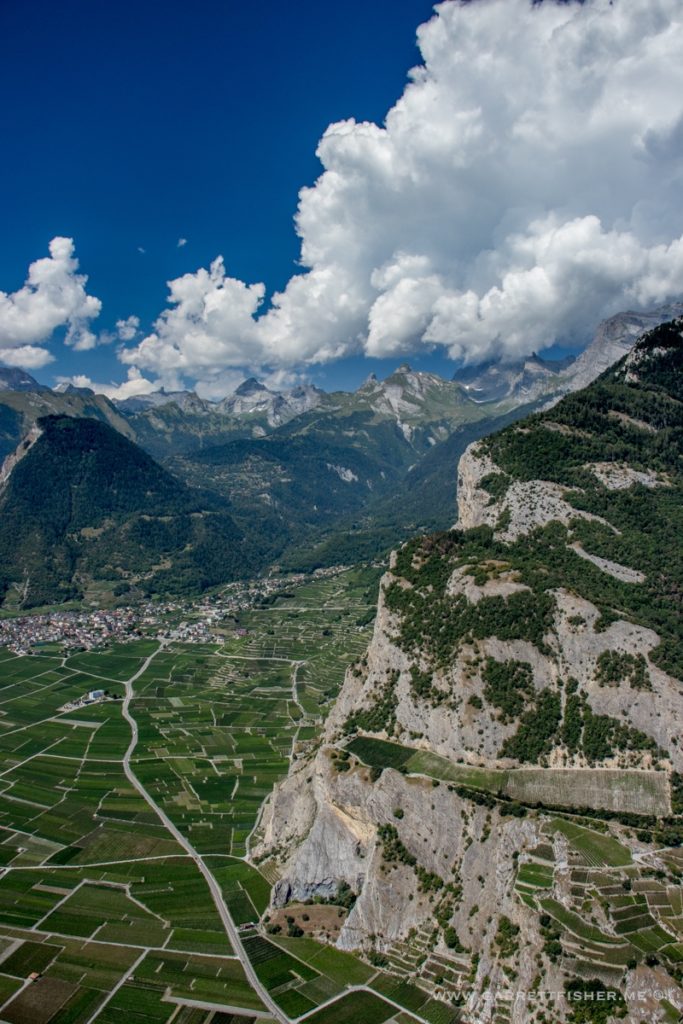 Looking up above Saillon, having just exited Class D.

Massif du Chablais. That snide peak looks down upon me while driving. 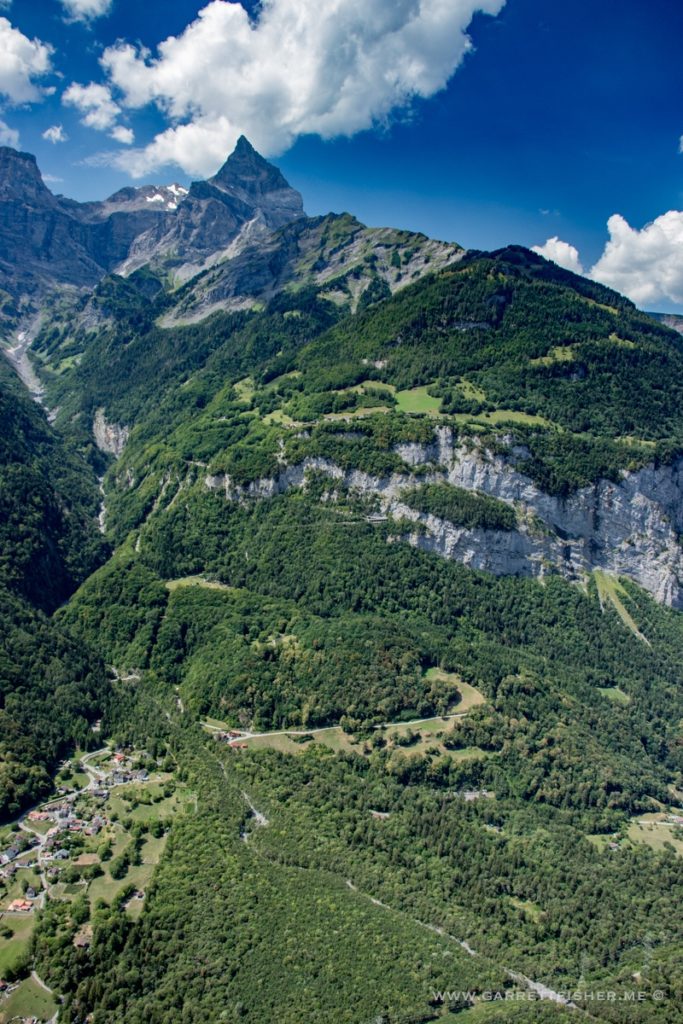 Mountains across the lake, said lake on the right horizon. Over Aigle, Switzerland. 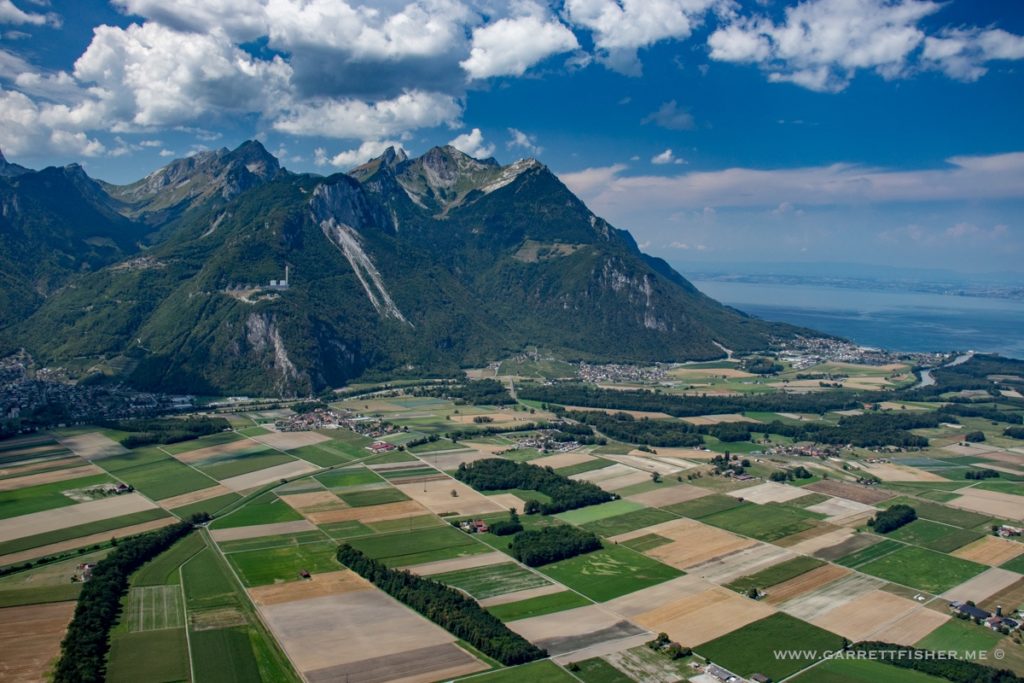 This dust cloud is an apocalyptic curiosity. Beneath it in Villeneuve is the shopping plaza where we go to the big box stores. One can see a stone quarry towering up the mountain, and after some deliberation, I postulated that they just push the rocks over the edge and let them tumble 1,000′ or more down. While in the parking lot another day, I could hear the thunderous sound of rocks careening down with billowing clouds of dust, while the locals pretended like it wasn’t happening. 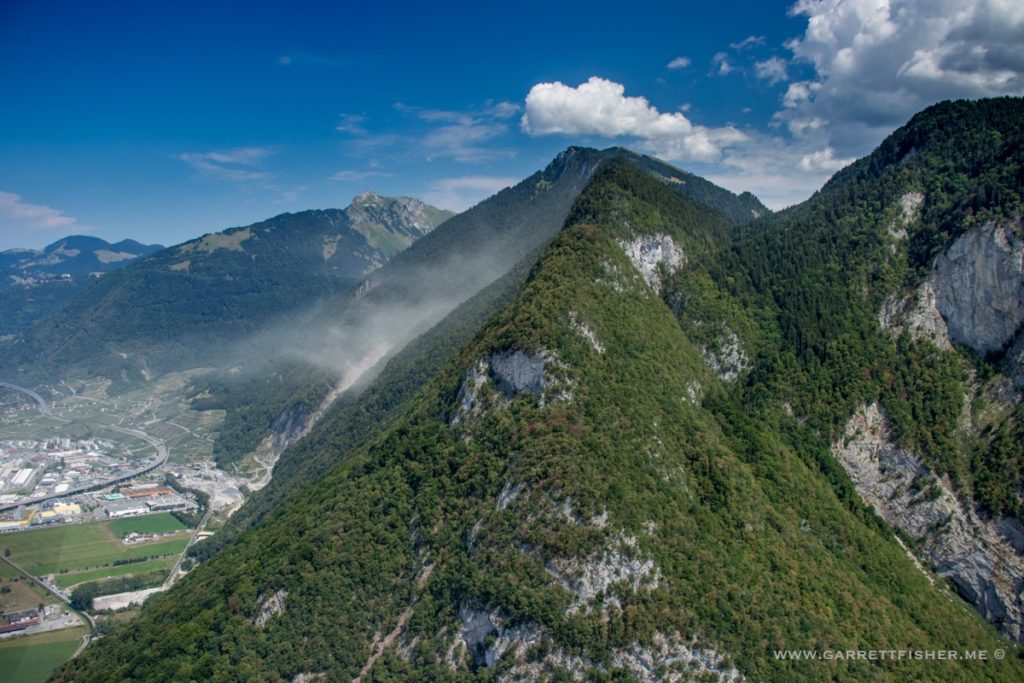 Swiss motorway alongside Lake Geneva. The penalty for speeding is death. 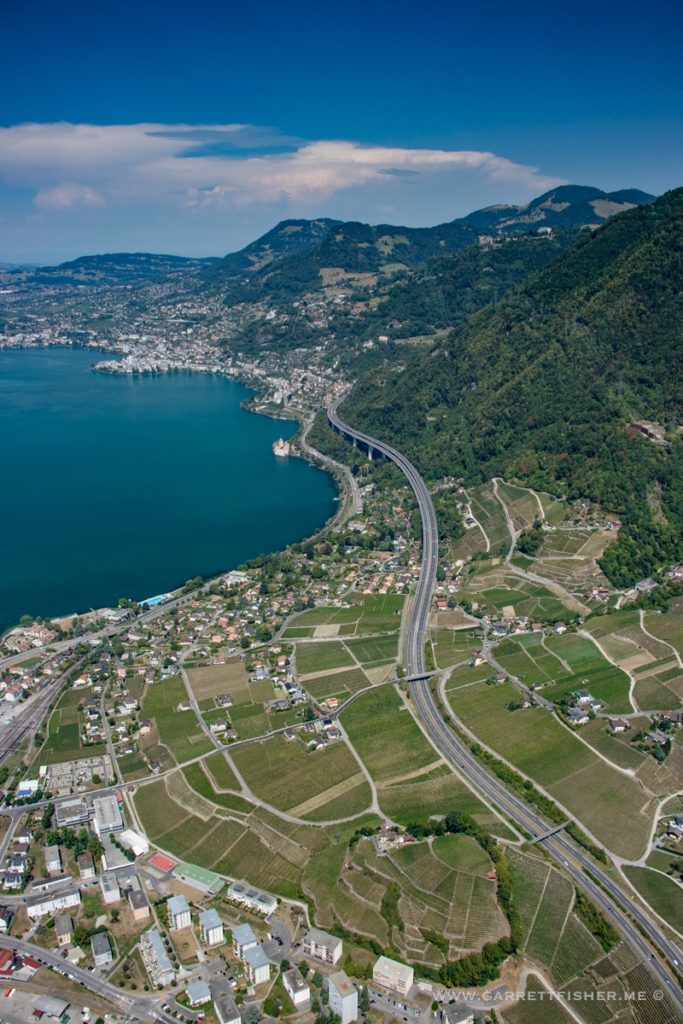 Lake Geneva and Villeneuve, Switzerland with Saint-Gingolph, France on the horizon. This infamous little hamlet is the site of my upcoming thwartation of the entire European online-industrial shoe selling complex, where the only vendors in the entire continent that sell my shoe size are “third party sellers” on Amazon, for which they refuse to ship to Switzerland. I concocted a way for the French Poste to hold it for me just across the border. Reviews indicated it is “a nice post office, except lines are long due to Swiss people picking up Amazon packages.” 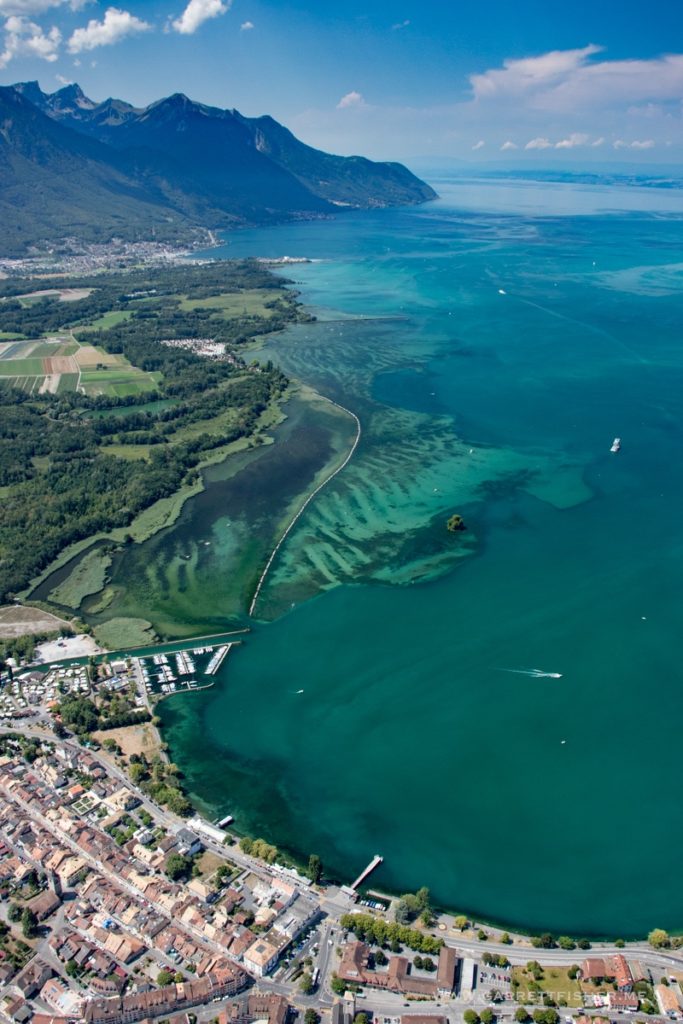 Lake Geneva foreground, Lac Léman in the middle. Yes, the French own 40% and picked a different name for their piece of it. 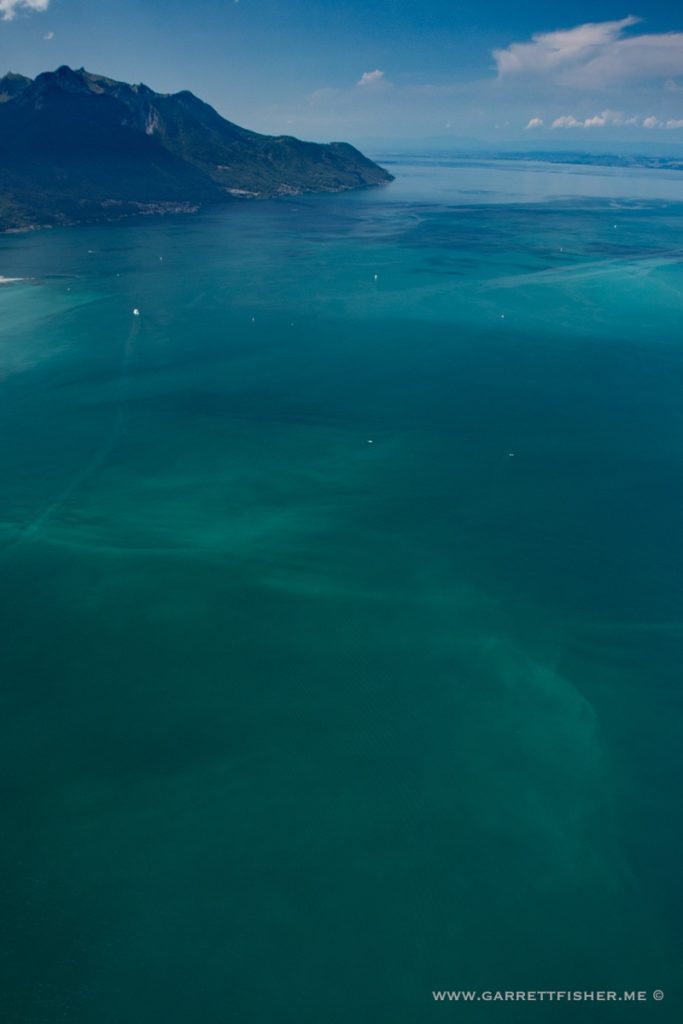 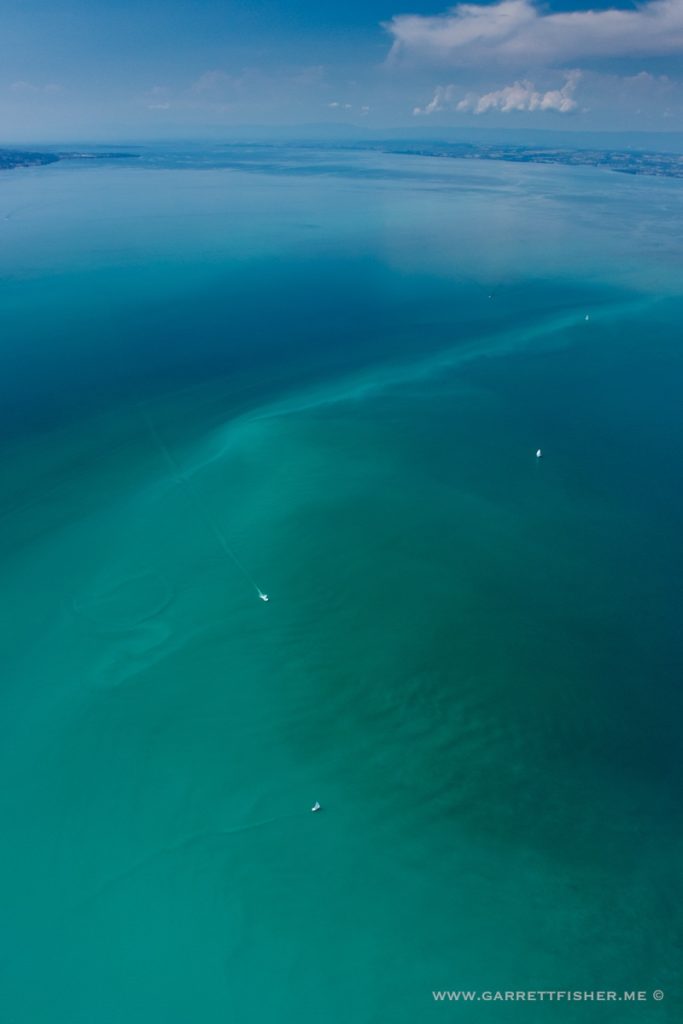 Lake Geneva (no Lac Léman in this picture) and the Vaudois Oberland. Once crossing a magic like into the Canton of Bern, it becomes the Bernese/Bernois/Berner Oberland, depending on the language. “Oberland” means “highlands” in English. Once translated, the exoticism diminishes a bit. 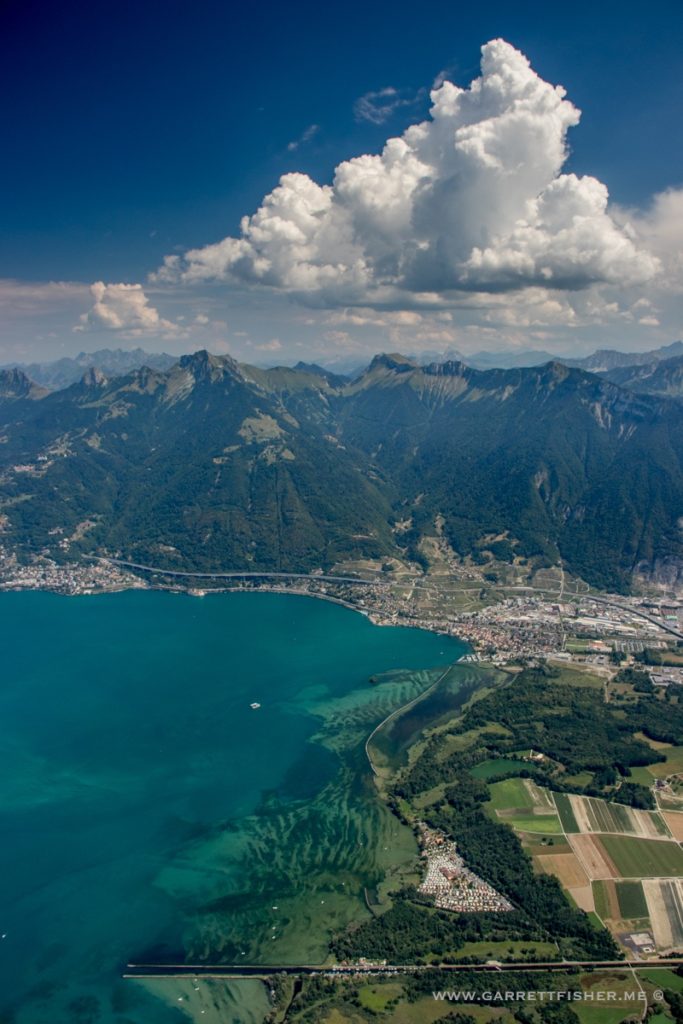 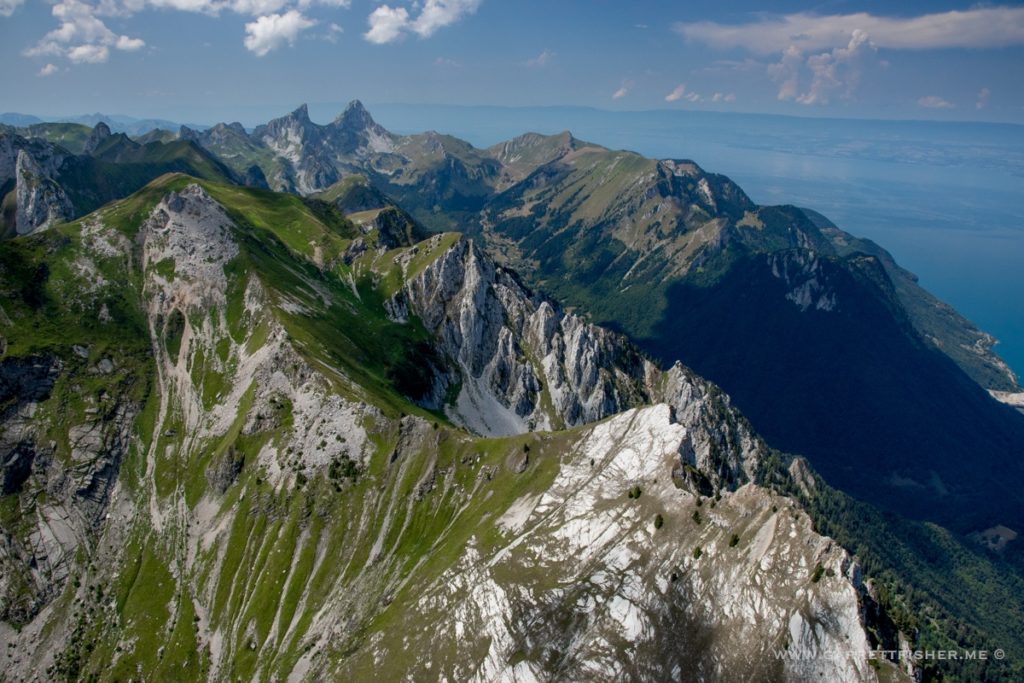 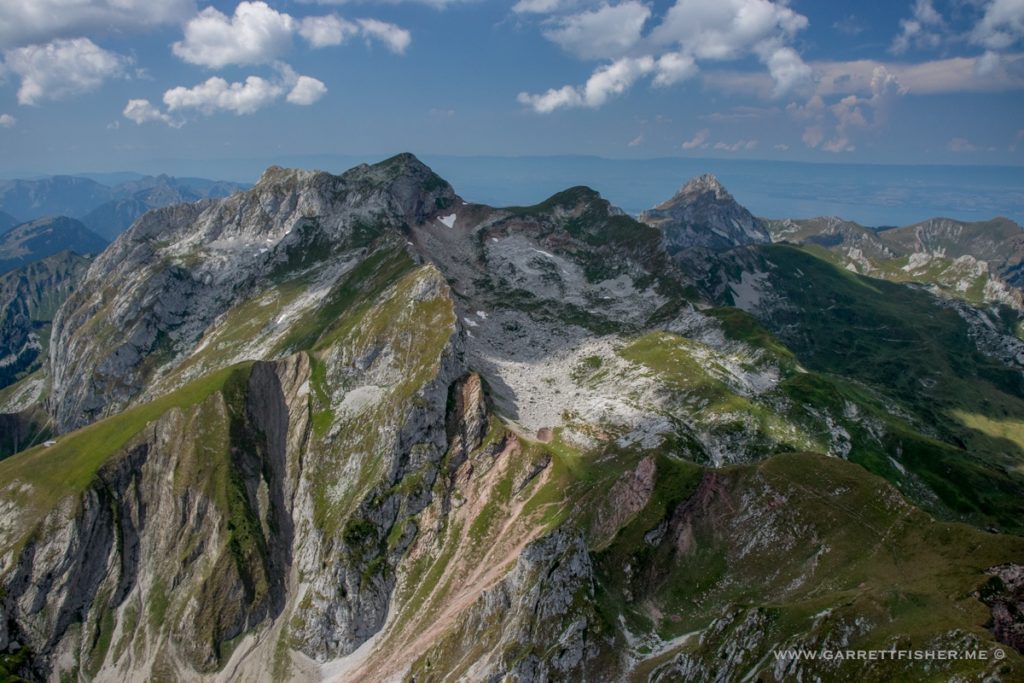 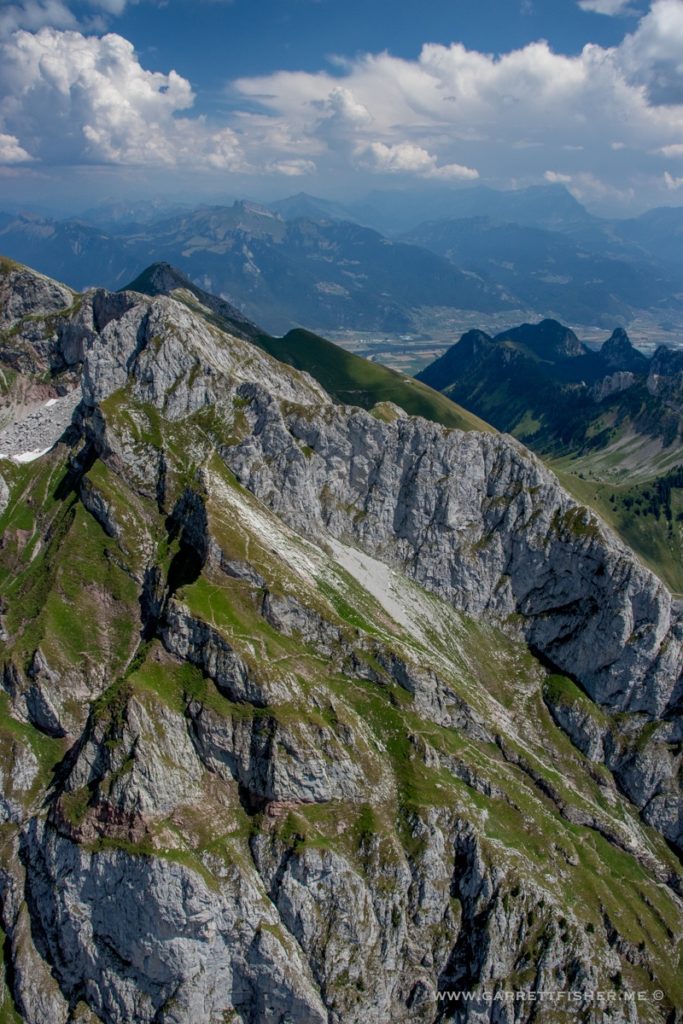 Massif du Chablais, another range that sneers from a distance at the chalet. 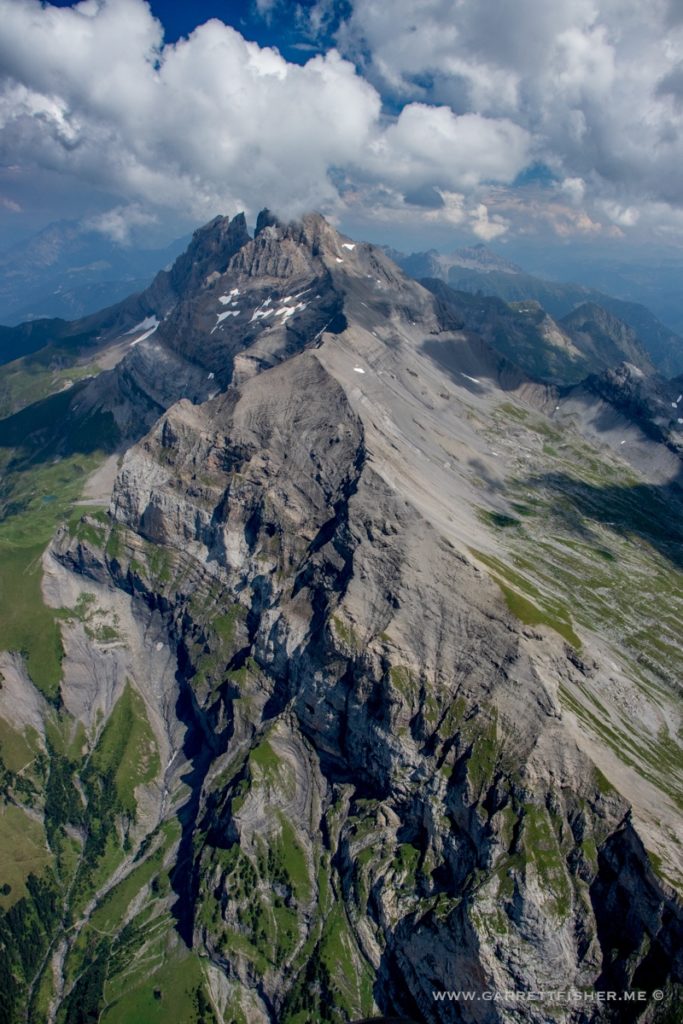 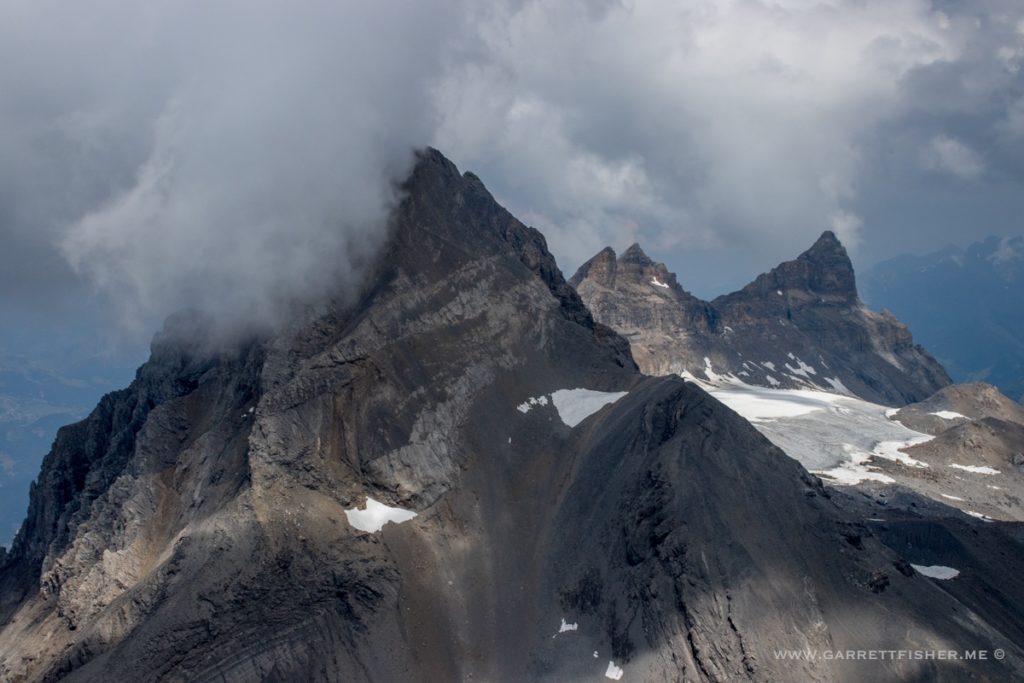 Looking down below on the valley that I flew toward Lake Geneva, introducing the “snide peak that looks down on me while driving.” While I’d like to ask who as the last laugh, I’ll be dead and rotted and this mountain will still be sneering for a very long time. 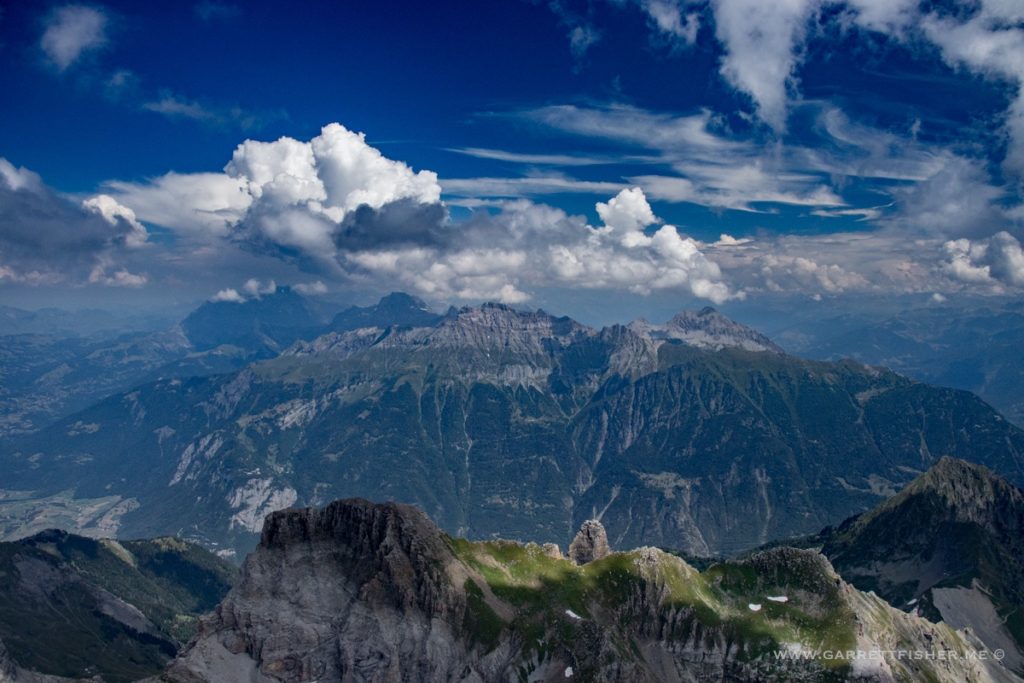 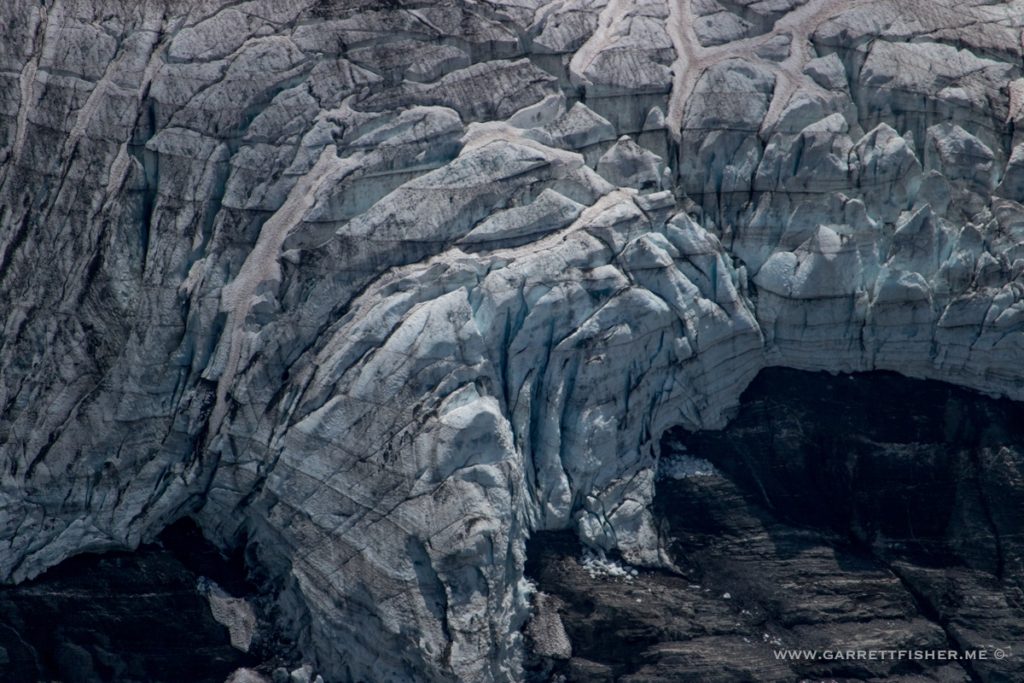 Looking at Martigny from the Massif du Chablais. One can note the haze. 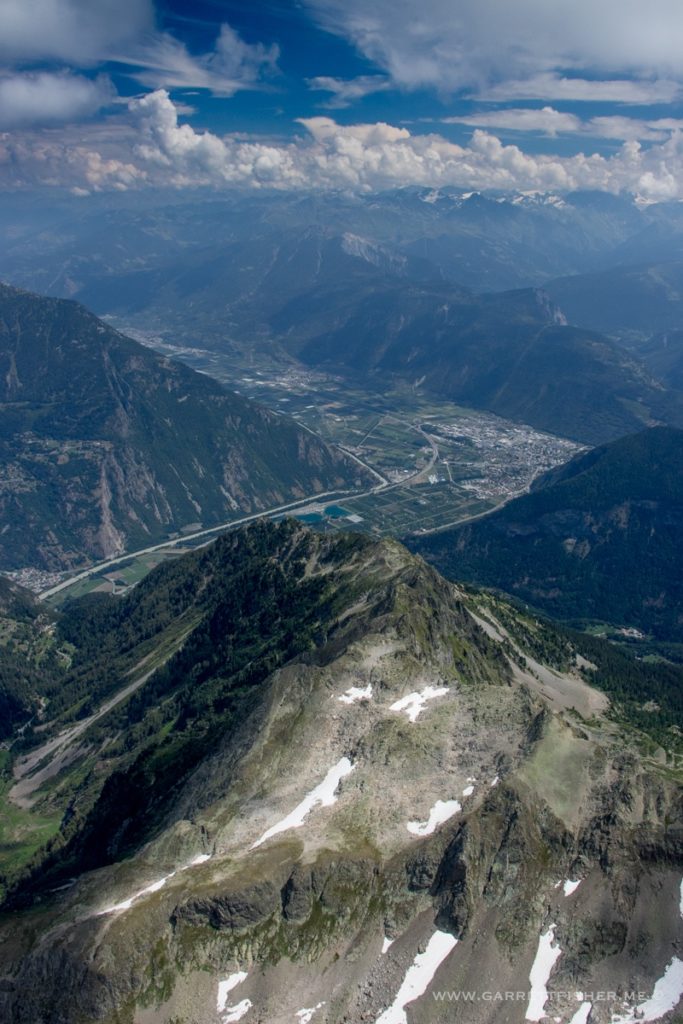 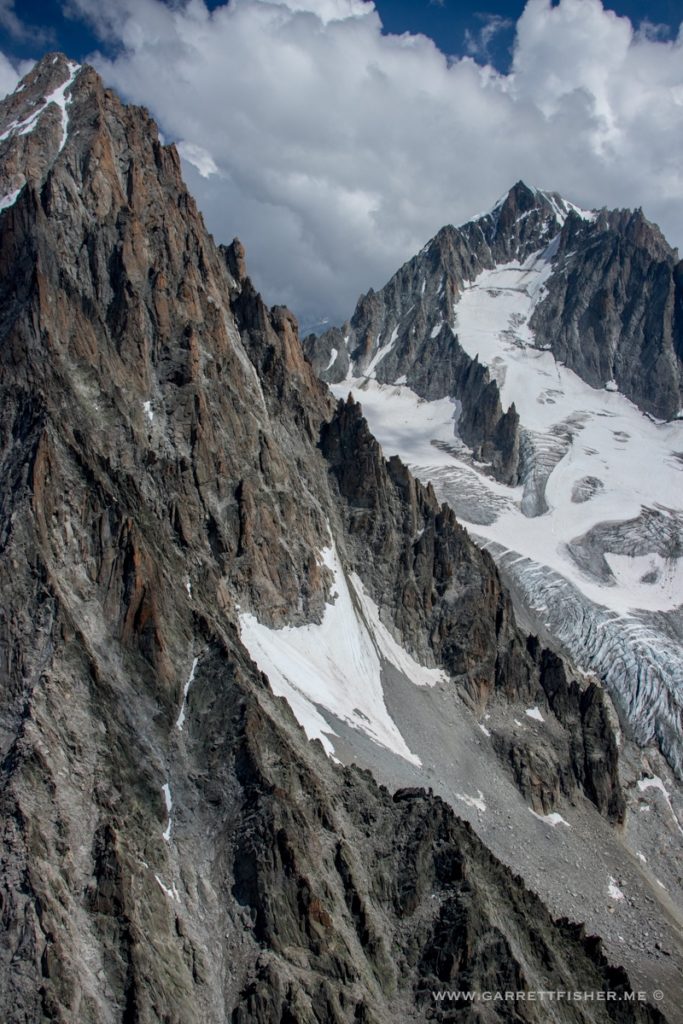 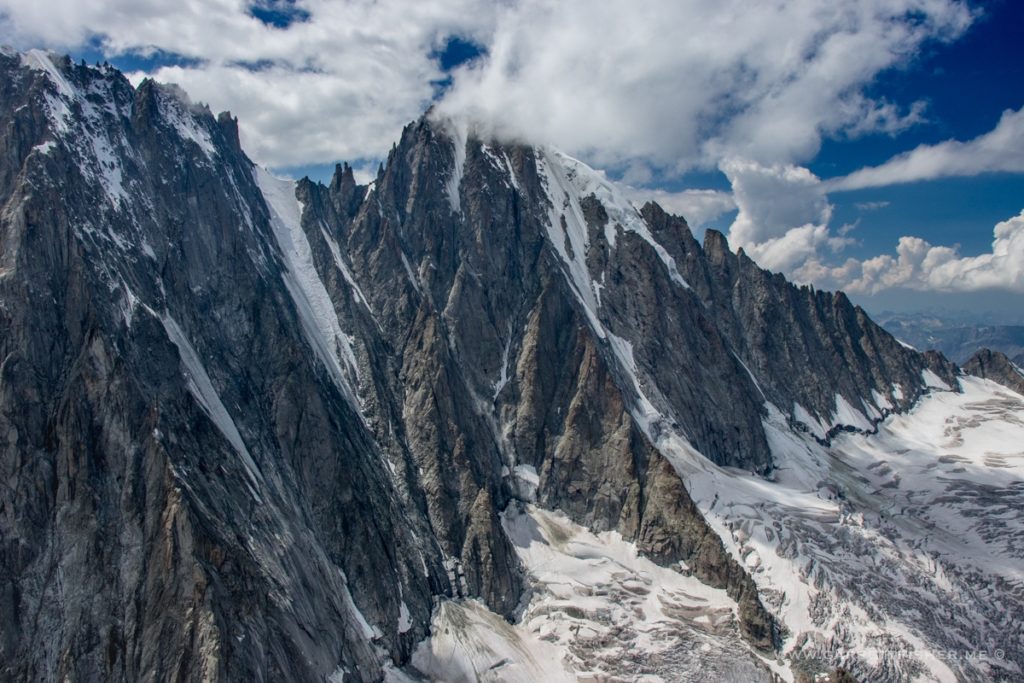 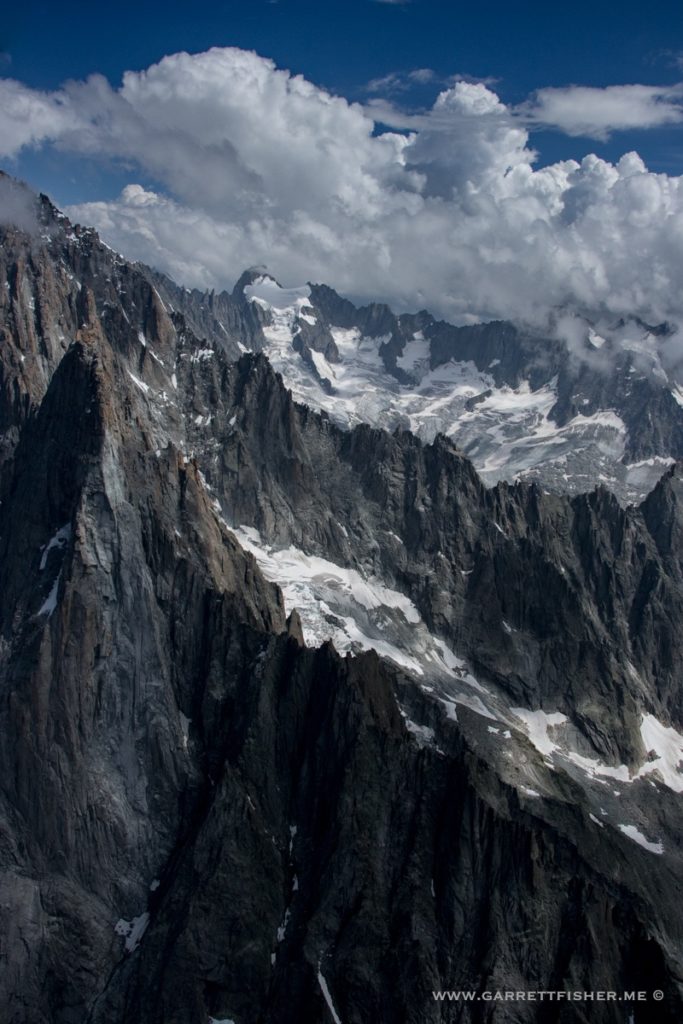 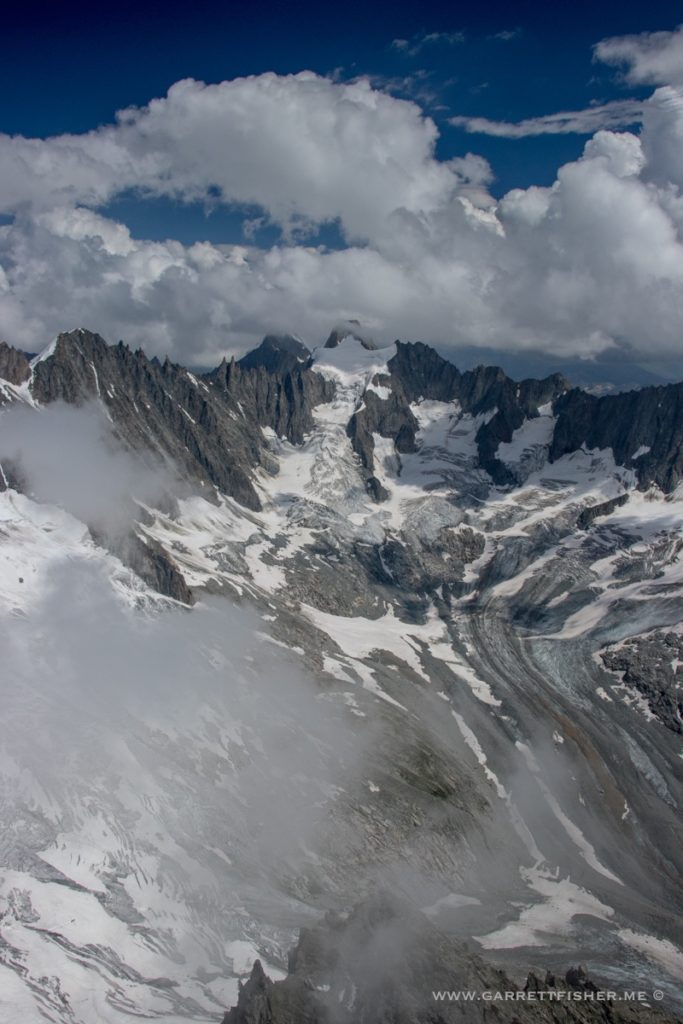 North slope Mt. Blanc, in a t-shirt with the window open. I didn’t expect to come up here. 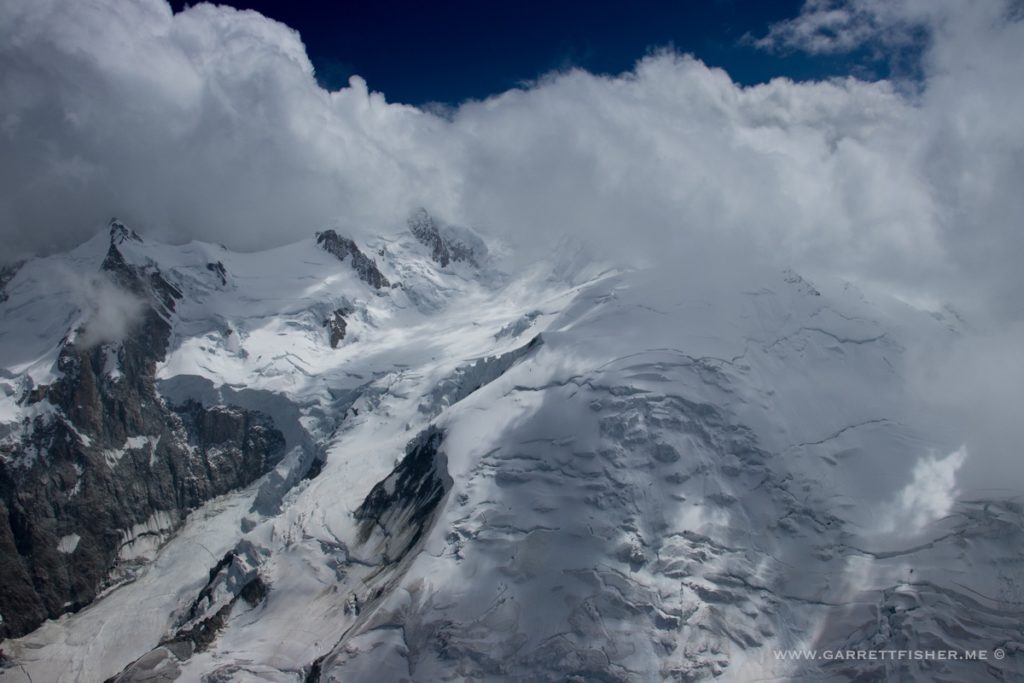 Glacier du Tour terminus. I am not sure if this is “calving” or “ice fall” or what. In any case, the ice was part of the glacier and it fell off the end. Note to self: don’t hike here while its warm out (trust me, I want to). 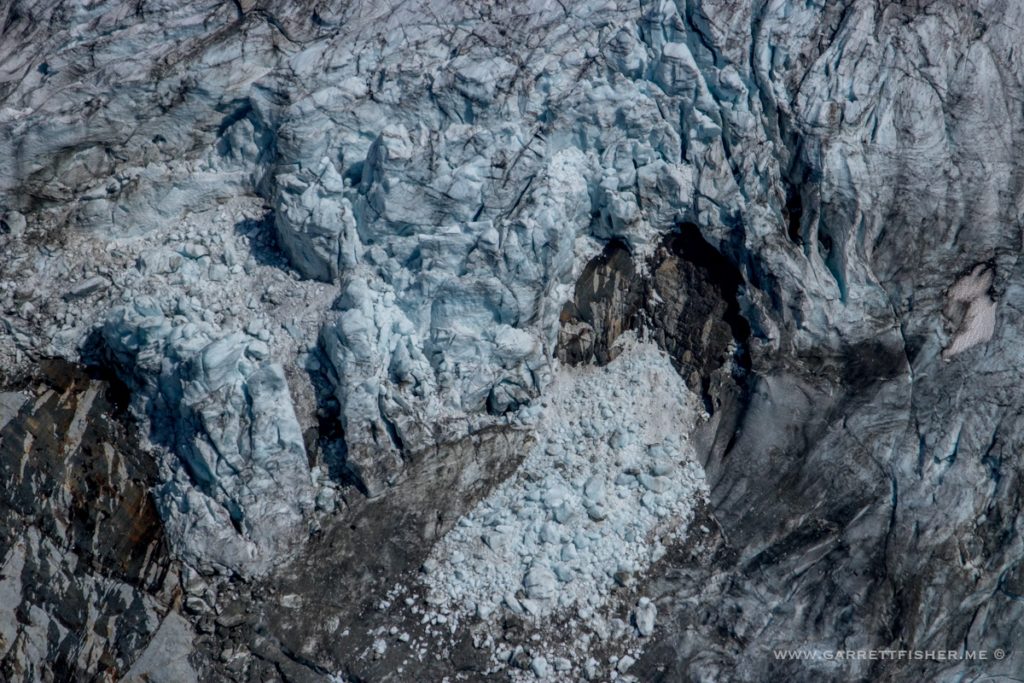 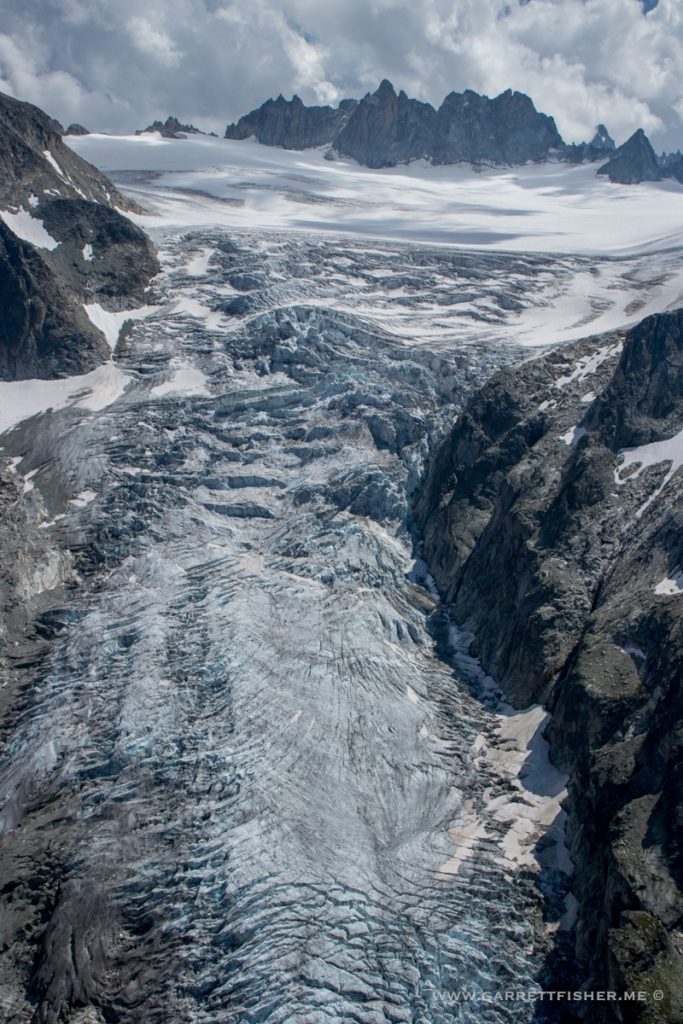 Mont de l’Arpille looking north along the valley to Lake Geneva. I originally flew that way, then back toward Massif du Chablais (left side of image). 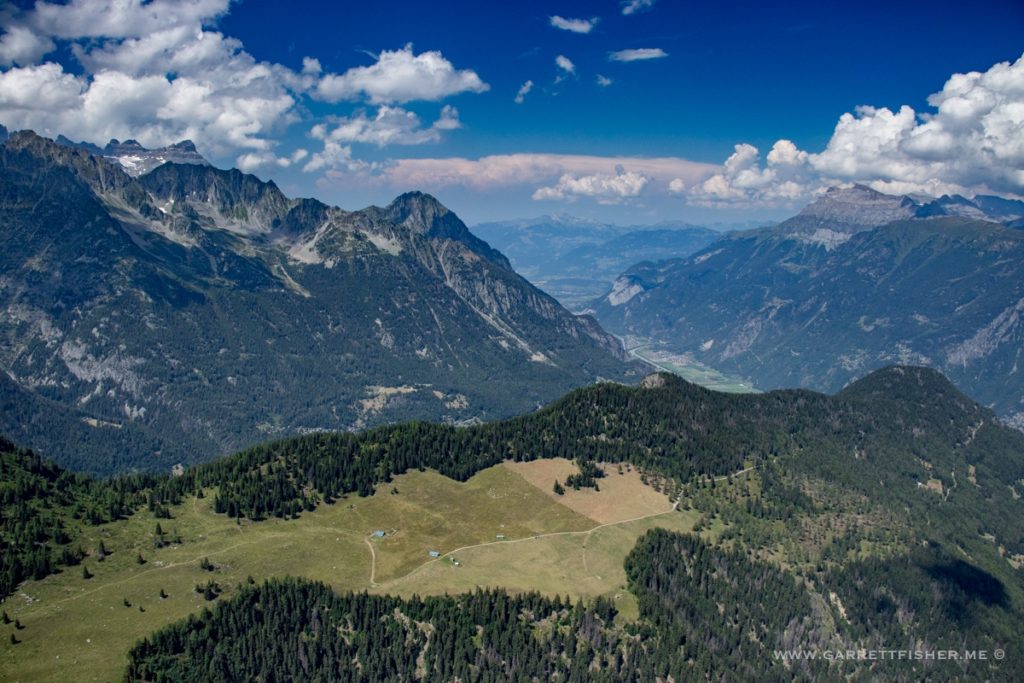 Chamoson, Switzerland, back inside the control zone. Swiss traffic patterns are a lot of fun, wedged between terrain. It is not considered unusual for pilots here. 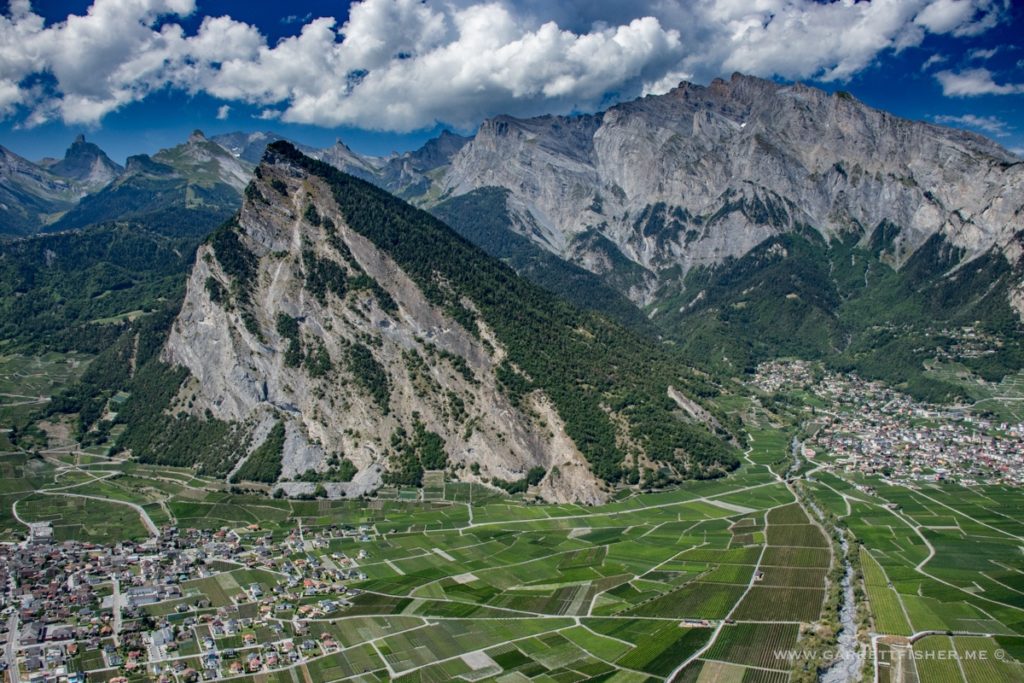