Skill and laziness apparently can conspire to create a strange form of inertia. As I may have alluded to, if there is one thing I do not get sick of, it is chasing glaciers. Given that “glacier season” for my kind of aerial photography is late summer, the time is now to engage in pursuit of these features, driven by the fact that glaciers are both declining and in motion, and that a lot can happen in a year. It would be foolish to have access to unexplored glaciers and elect to not pursue them. If 2020 is any indication that things can rapidly go to shit, then I don’t know what is.

I have a variety of projects that I track in my mind. The glaciers of the Pennine Alps is the next one (I have a book of the Bernese glaciers due out in days), mostly because I had the bulk of them already. The surface area of the region is large enough and filled with enough glaciers that the project is ambitious. Nonetheless, I believed I had one last flight, which was to explore the south-facing ridges on the Italian side of the Alps.

The flight would be long, consuming nearly an entire tank of fuel, climbing up and over two mountain ranges, dropping down the other side, snaking around a bunch of ridges, looking for glaciers beneath some of the largest peaks in the Alps, often with clouds on the south side. Accordingly, “laziness” set in as day after day, I couldn’t get a read if I would get clouded out upon arrival or not.  The other factor was that I wasn’t sure that any real glaciers were there. Satellite maps were unimpressive and flights up at 15,000 feet along the border showed an explosive overload on the Swiss side, with some piddling nonsense on the Italian side. At the same token, my accounting-influenced insistence that I “get them all” demanded that I check out what was there.

Finally, two factors lined up. The weather [sort of] cleared up, and I hadn’t gone flying in over a week. With the weather due to become crappy for 5 days, it was now or never to alleviate the hormonal pressure relieved only by flying a Cub.

After the tedium of getting where I wanted to go, I realized why I was disinclined to perform the flight: it is a lot of work. There are many ridges to explore, lots of tight mountain flying and, as I got closer to where some glaciers might be, I realized that the mountains are massive, with menacing clouds wedged against the glaciers. Winds were intriguing on top of it. As I was squeezing between clouds and mountain ridges, getting knocked around by mystery winds, I had to ask myself “Why do you ever get the idea that any of this is easy? This is a ton of work.”

At any rate, I was pleasantly surprised how large the glaciers were. Part of why I thought that there were none of any consequence pertains to the fact that, nearly 100% of the time, clouds have been hugging the Italian side of the Dufourspitze (15,203’ / 4,634m), while I was flying above them in a state of ecstasy at what was sticking out above. If I can’t see the glaciers, then they must not exist.

Thus, I present photographs of the “glaciers that weren’t there.”

The Italian side of the Pennine Alps. The scene looks similar to a flight in September 2015 to the Elk Mountains south of Aspen, Colorado. 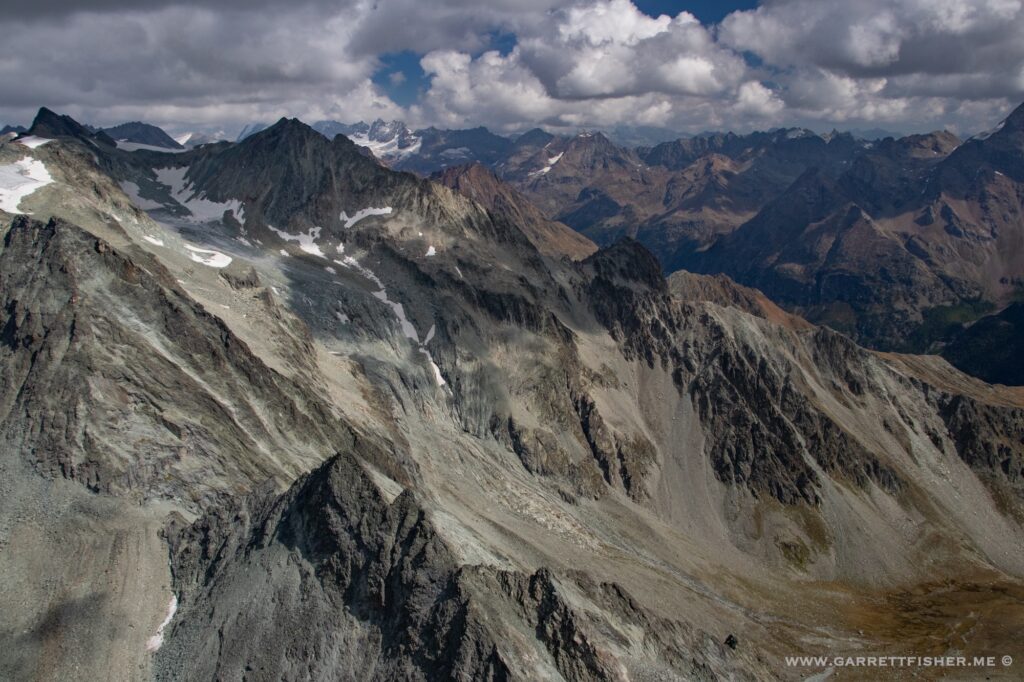 Lac de Places de Moulin (yet it is in Italy). The glacier on the other end has already been photographed for the project, so proceeding to the right to see what I can find. 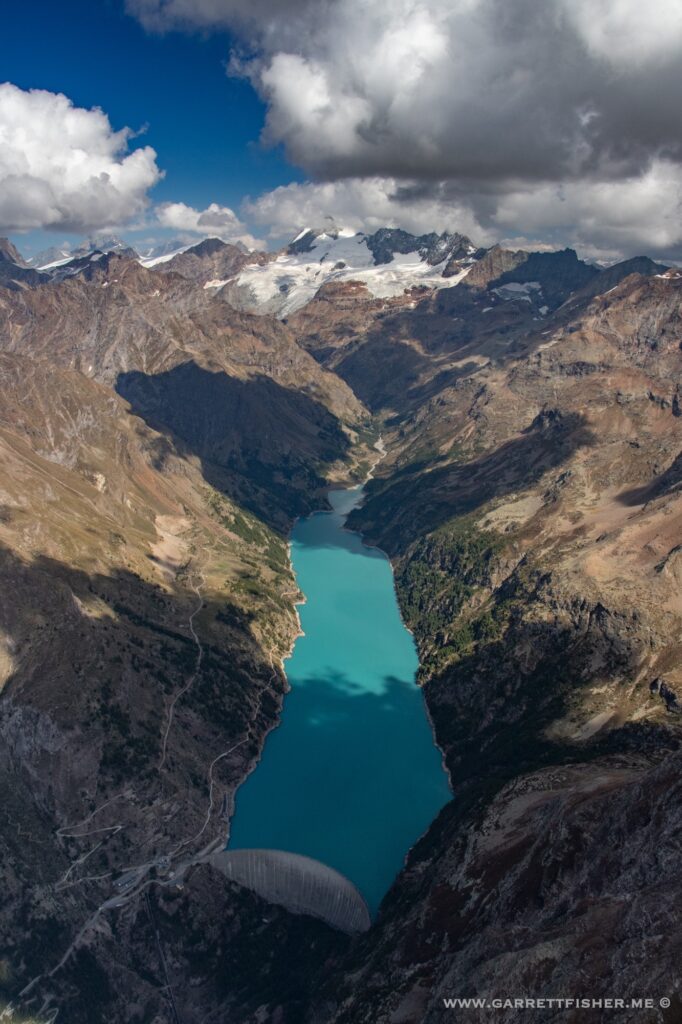 Sneaky glacial feature below. Too small to matter. 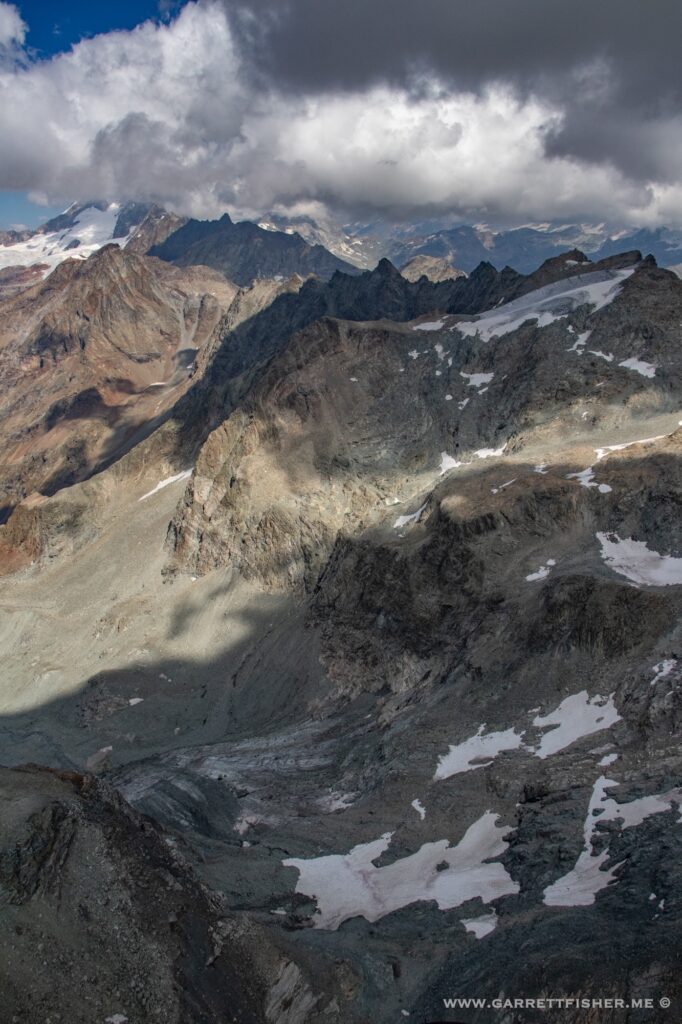 Merda! That one is on the Italian side. Will have to come back another day as fuel does not permit getting close and finishing the job today. 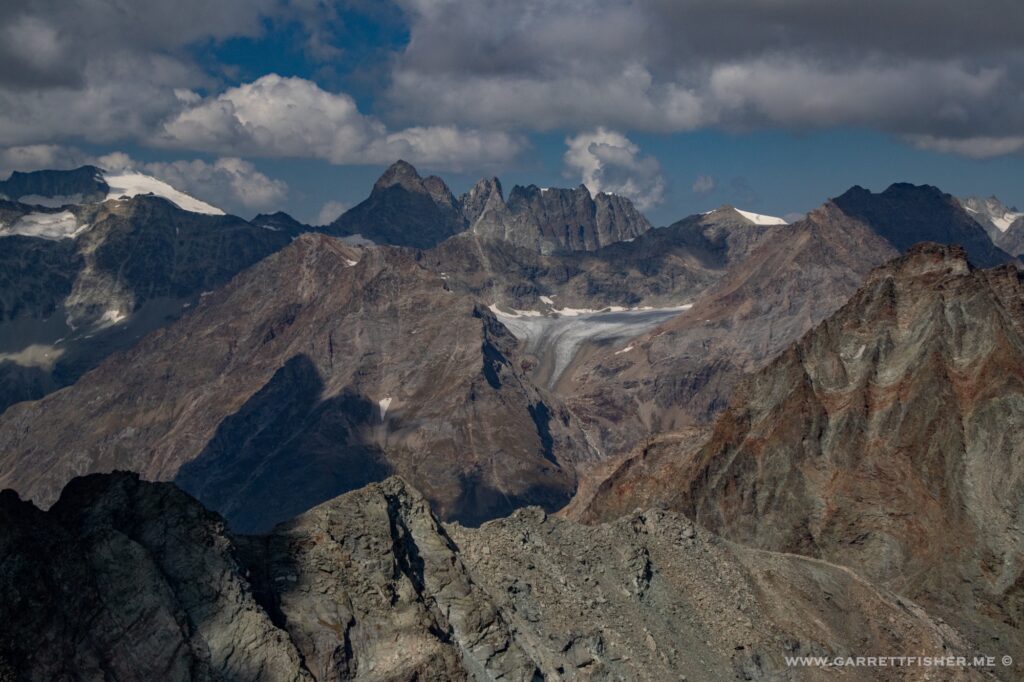 Curious snow patch in the foreground, though not a glacier. 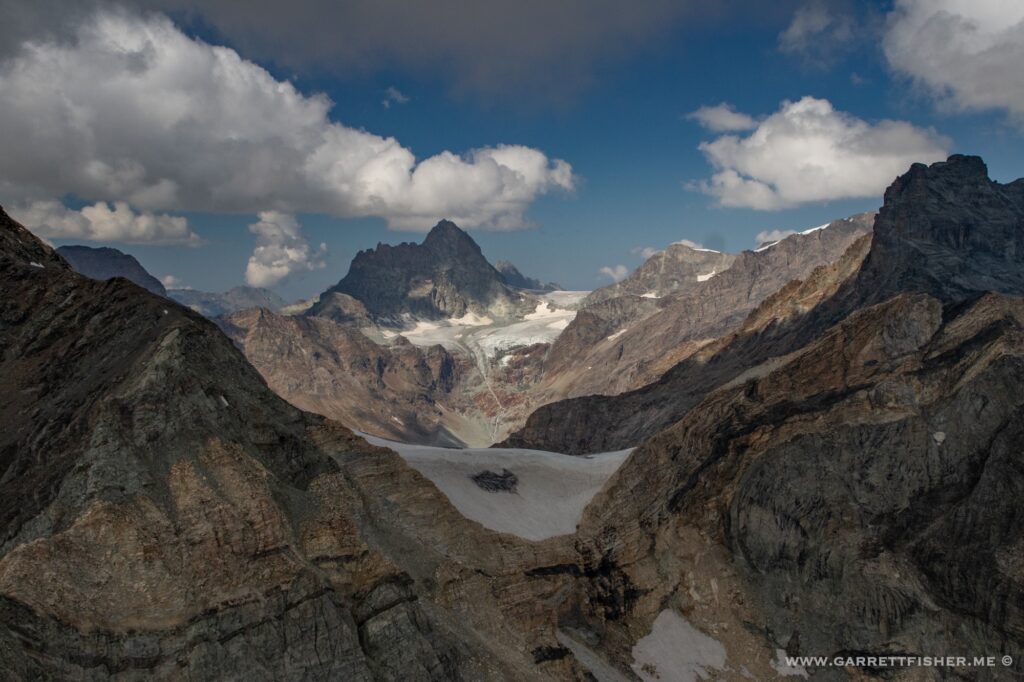 Mont Tabel Glacier & Chérillon Glacier. There might be more up in the clouds. Now we’re getting somewhere with terrain. 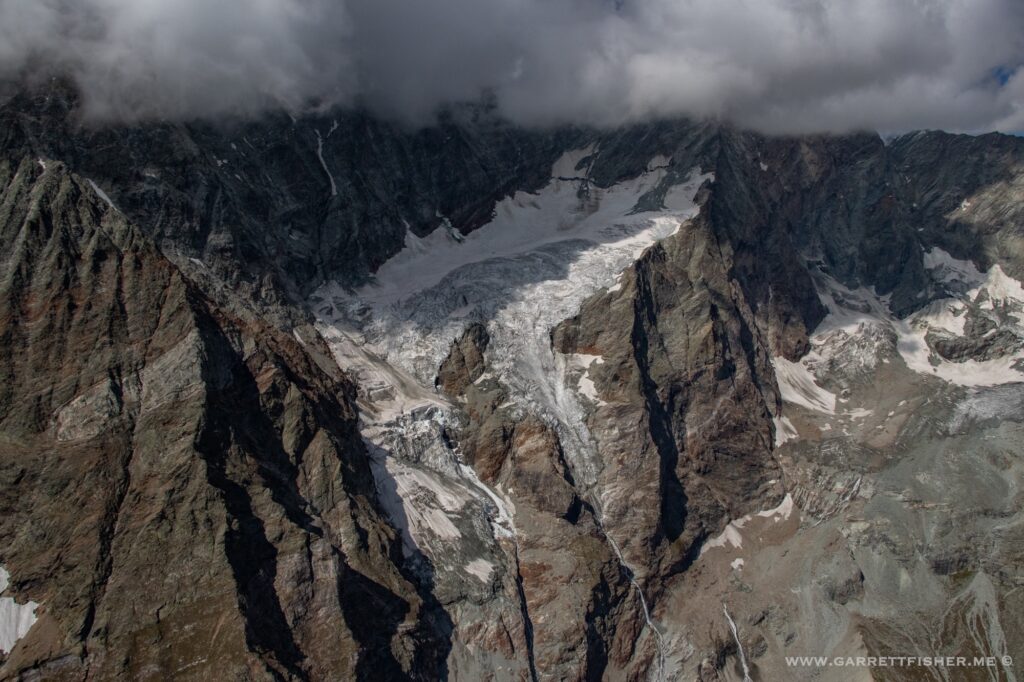 And that is the Matterhorn sticking up into the clouds. Flight altitude 10,500′, with the peak at 14,692′, well out of view. Suddenly this valley is much more menacing when down low in it. 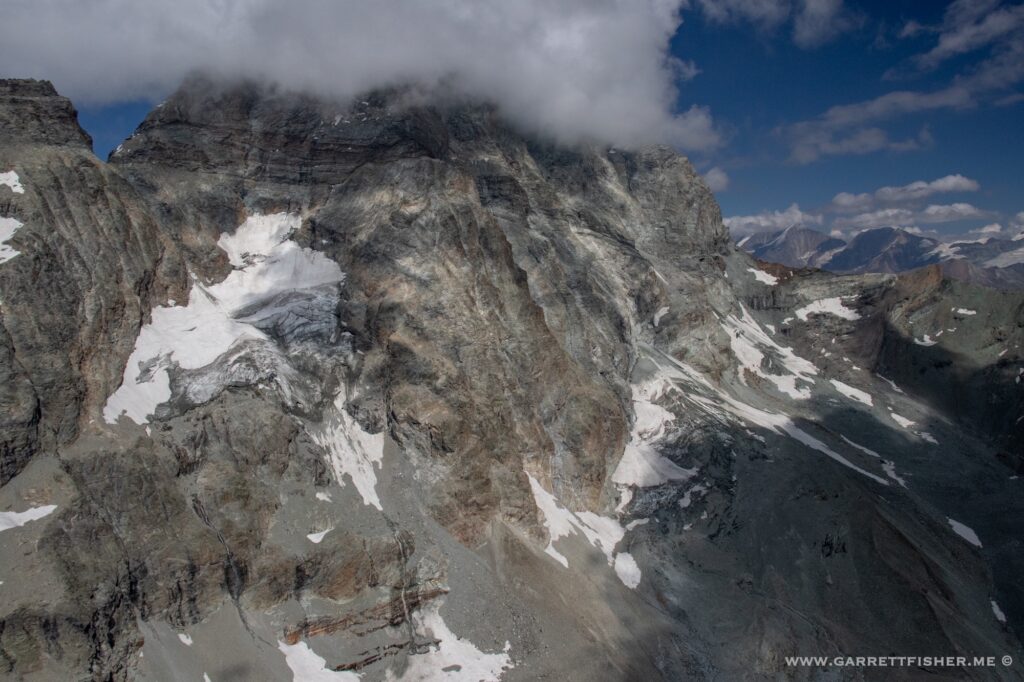 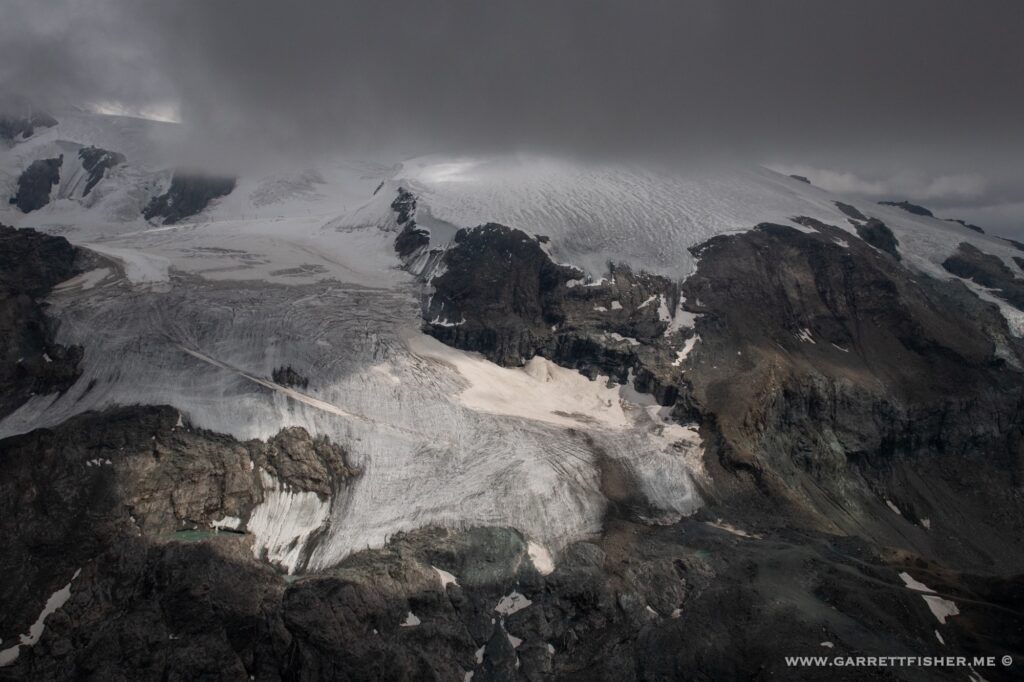 Glacier d’Aventine. I don’t know why my map software alternates between French and Italian. 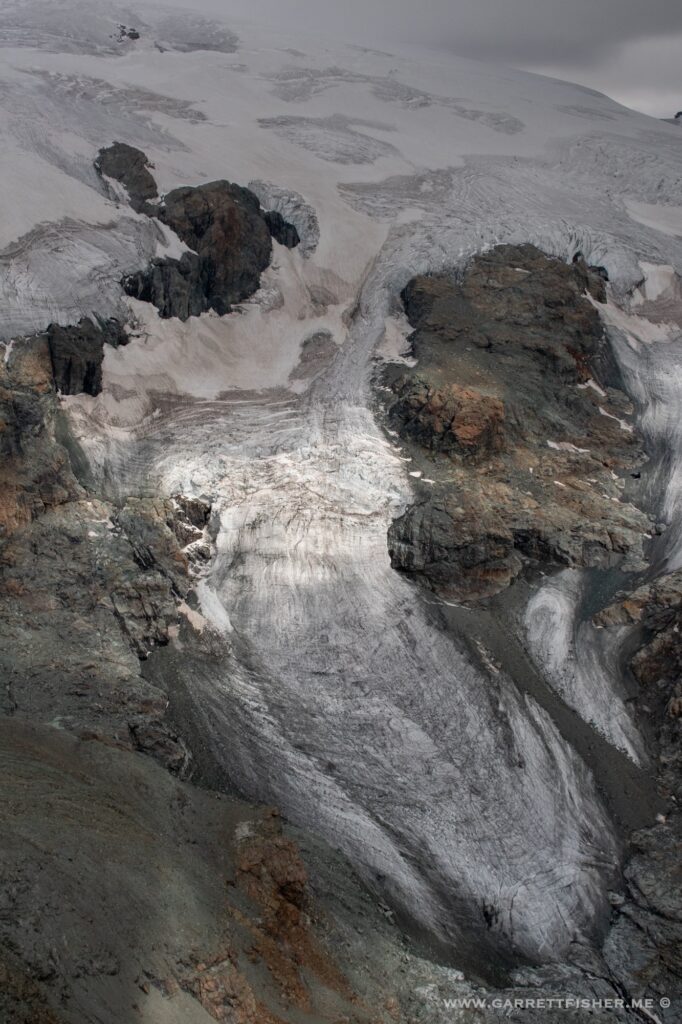 Petit Glacier de Véraz. Ironic that it has “petit” in the name when it is really rather large. 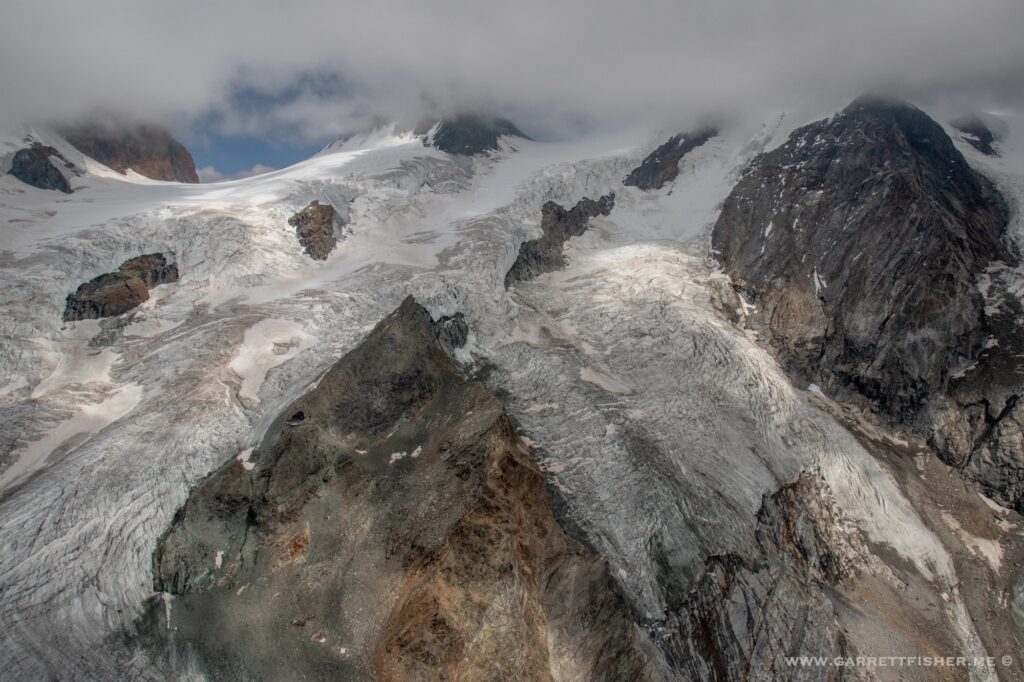 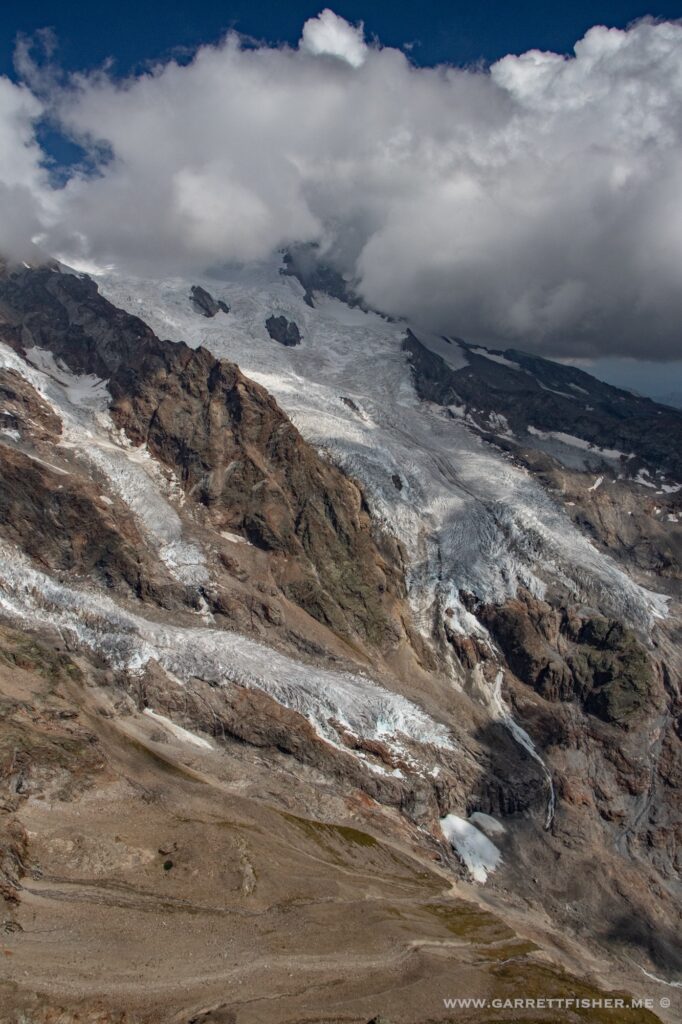 Southeast of the Dufourspitze, down in the vertiginous clouded menace. Ghiacciaio Delle Piode Occidentale. Back to Italian. 11,100 feet. 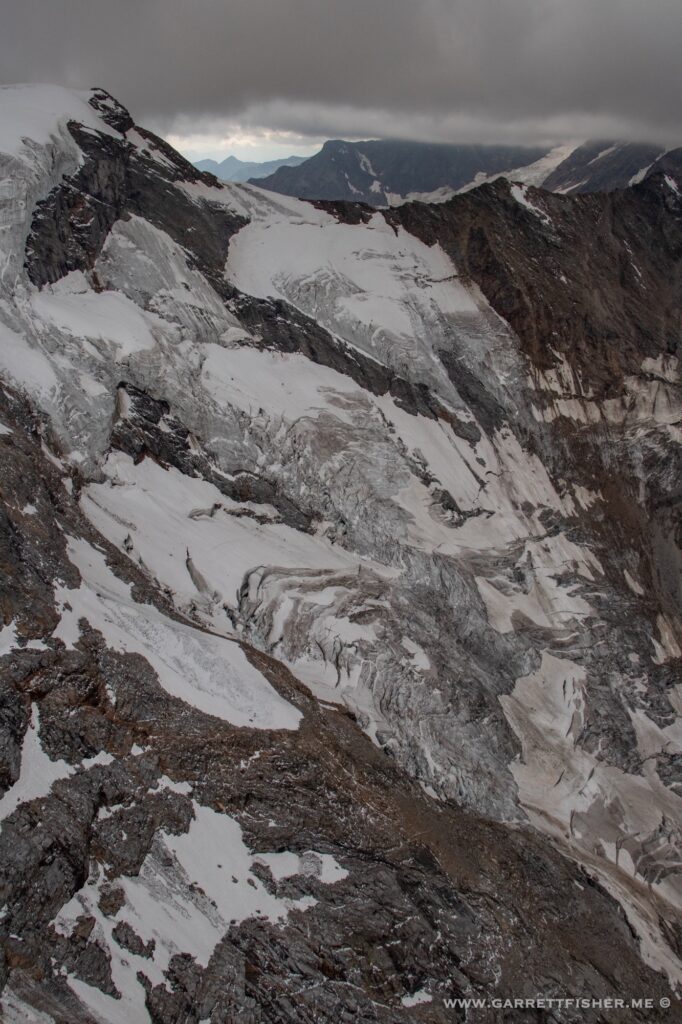 Ghiacciaio Delle Piode. From the satellite map and from above, the foreground looks like the glacier is dead. Note that water is coming out from the bottom, which means that there is quite a bit of ice with rock on top of it. 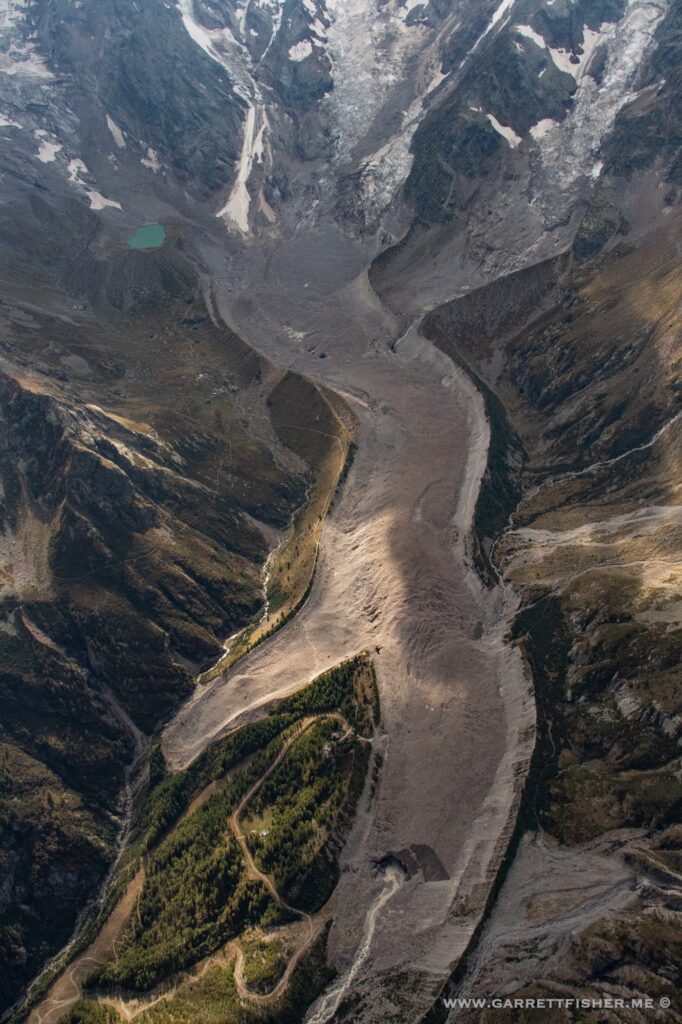 Lago Alpe del Cavalli with Lago Maggiore on the horizon. It can be frustrating that clouds frequently occlude the glaciers I am chasing when it is sunny elsewhere, but so be it. 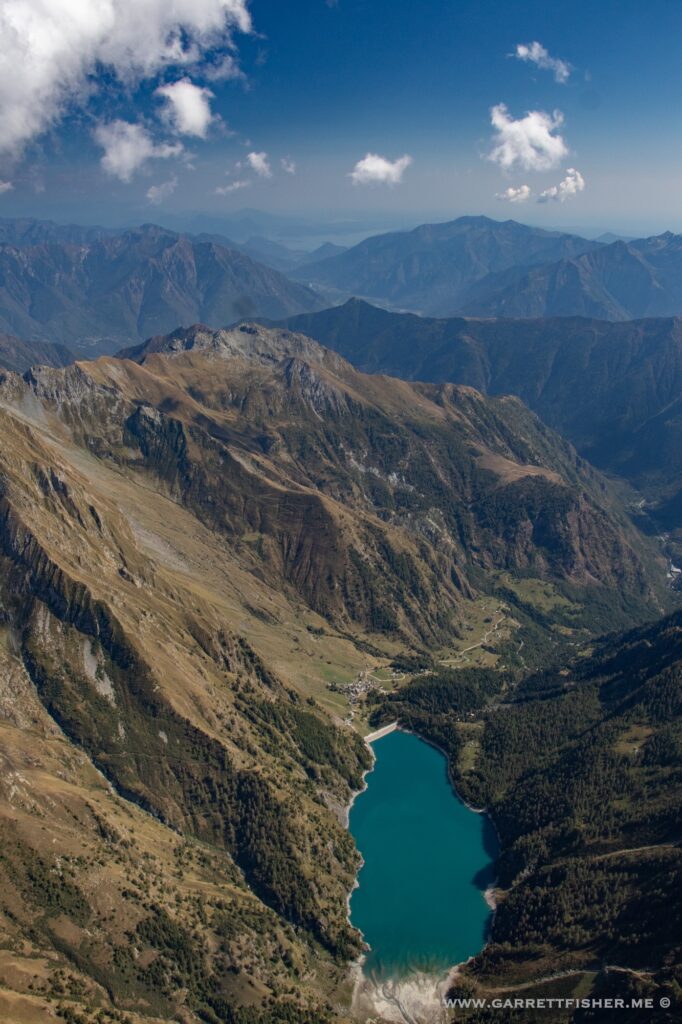 Alpjergletscher drainage, just on the Swiss side, taken from Italy. This one is in the Lepontine Alps, another project for another year, though it can’t hurt to start collecting images. 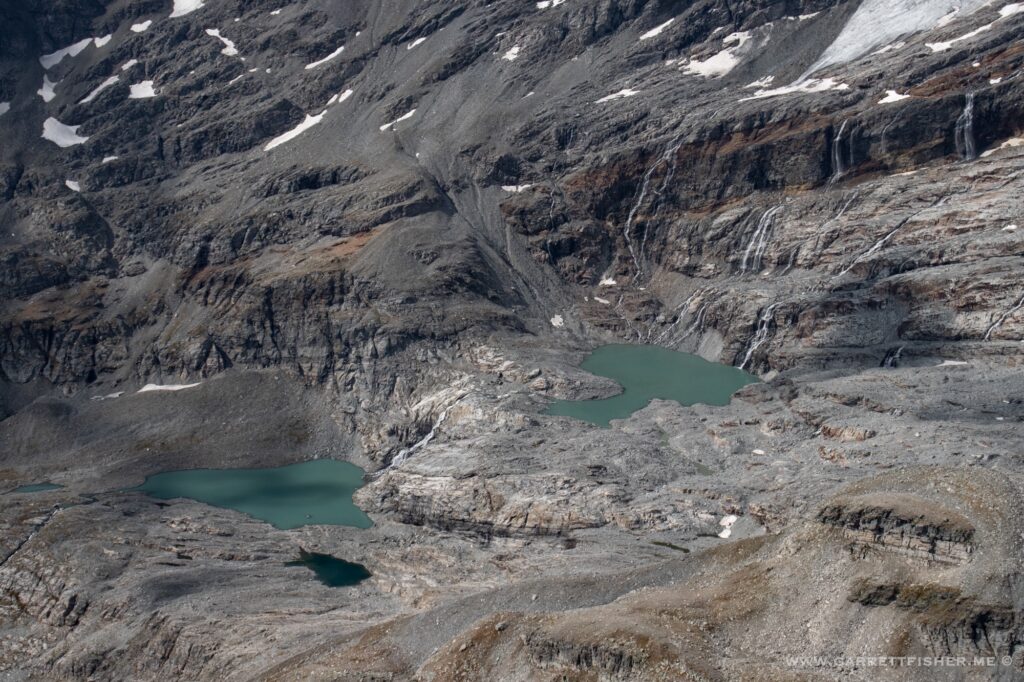