On most days, when the forecast calls for 50 knot winds (57 mph, 92 km/h) in the mountains, I pass on the idea of flying. It is the logical choice, as the aircraft cruises at about 80 knots, which means one wouldn’t go very fast. There is also the matter of rotors and waves, as the winds get bent initially upward, then equally downward, with rotating tubes of air in between. A small aircraft cannot overpower these realities on engine power alone.

That is not to say that all wind is untenable. Conventional wisdom states a maximum of 20 knots, though that finds no reference in the law or in official regulations. 30 to 35 knots are a reasonable maximum if the conditions allow, though as mentioned before, anything more risks sitting still, “cruising” at 80 knots airspeed into the face of raging winds, going nowhere fast.

I will never really understand why, on some days, I look out the window, get a feeling, check the weather, and find the idea of 50 knots not a problem. On the day in question, it was closer to 35 knots over the western Alps, with higher speeds toward Mont Blanc, owing to an interaction with the famous Mistral wind. Winds also at 10,000 feet were of much lower speed, so I could pop up into the current, surf a bit, and come back. A quick calculation of GPS speed into the wind and briefly with it behind me at 16,000 feet confirmed that it was indeed 50 knots at altitude.

The interesting factoid that materializes on this flight is that it was the first in the Super Cub to Mont Blanc. I owned the aircraft for a year before I bothered to take it to the summit, though I did take the PA-11 there multiple times in the intervening period. Sure, the fact that the Super Cub spent a fair amount of time outside of the Alps is part of the equation, though wouldn’t the presence of more heat, power, speed, and climb rate instill the necessary motivation to take the easier aircraft? I took the Super Cub to Morocco and Norway before I took it a short distance to Mont Blanc.

Anyhow, it was an interesting ride clearing the turbulence layer at 13,000 feet. Once I reached about 14,000, it was up like an elevator in the ascending wave, staying on the north side of the summit. Had I slinked over to the Italian side, well, things would not have gone well. Winds are smooth on the windward side and are what I call “Mr. Toad’s Wild Ride” on the other, where if one gets caught in it, he must take the “royal flush.” Once sucked over the ridge, expect severe turbulence, the loss of 3,000 feet or more, and a vain attempt to get back. It likely won’t work due to downdrafts….so one merely flies to Turin, Italy instead. Best not to toy with it…which I did not.

I would have gladly ridden the wave as high as it would go, though warnings about Class C airspace from my iPad and airliners overhead meant that ATC would not have allowed it there. That is for another day.

Approaching the aiguilles from the east, with some blowing snow on the ridges. 12,500 feet. 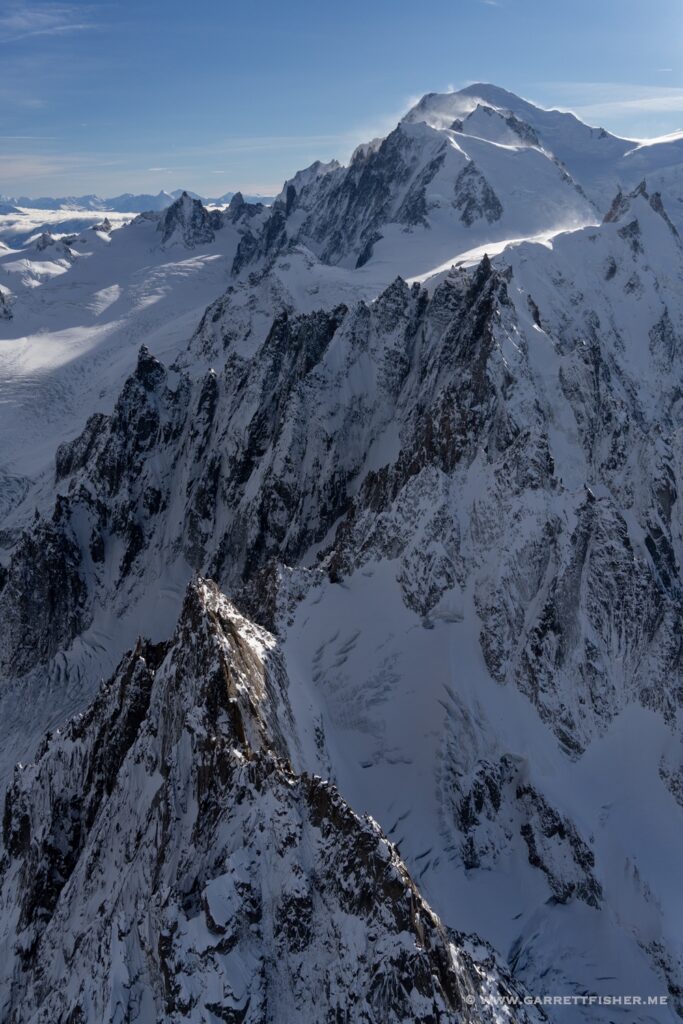 The first sign of an issue. The snow is blowing from north to south on the ridges, though the blowing snow in the foreground is going in the opposite direction! Where the two winds meet would be displeasing, so I kept a bit of distance. 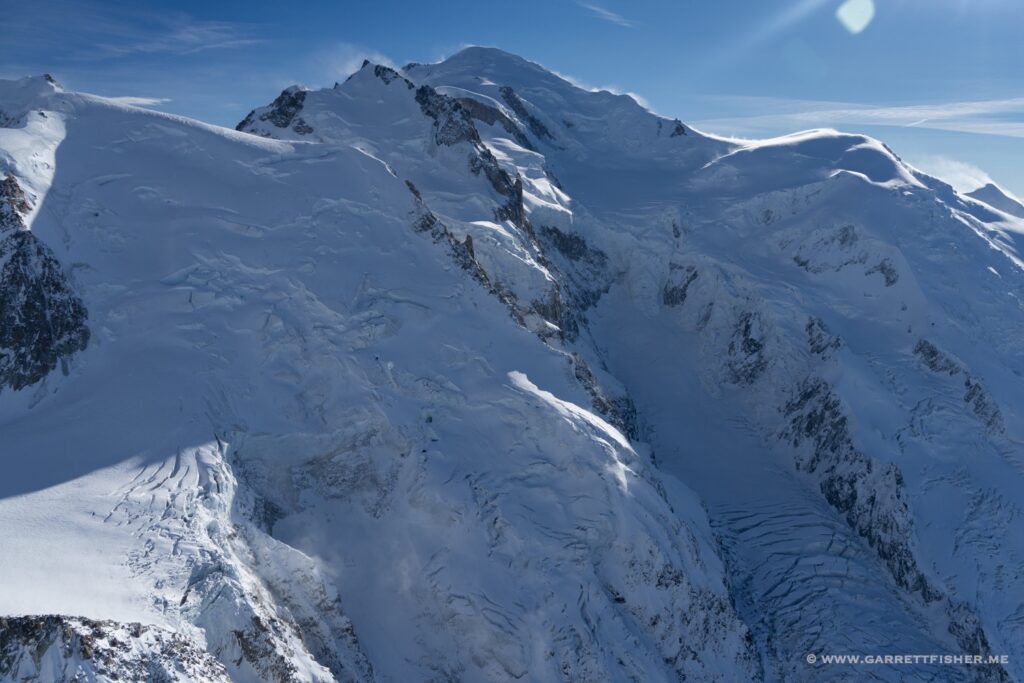 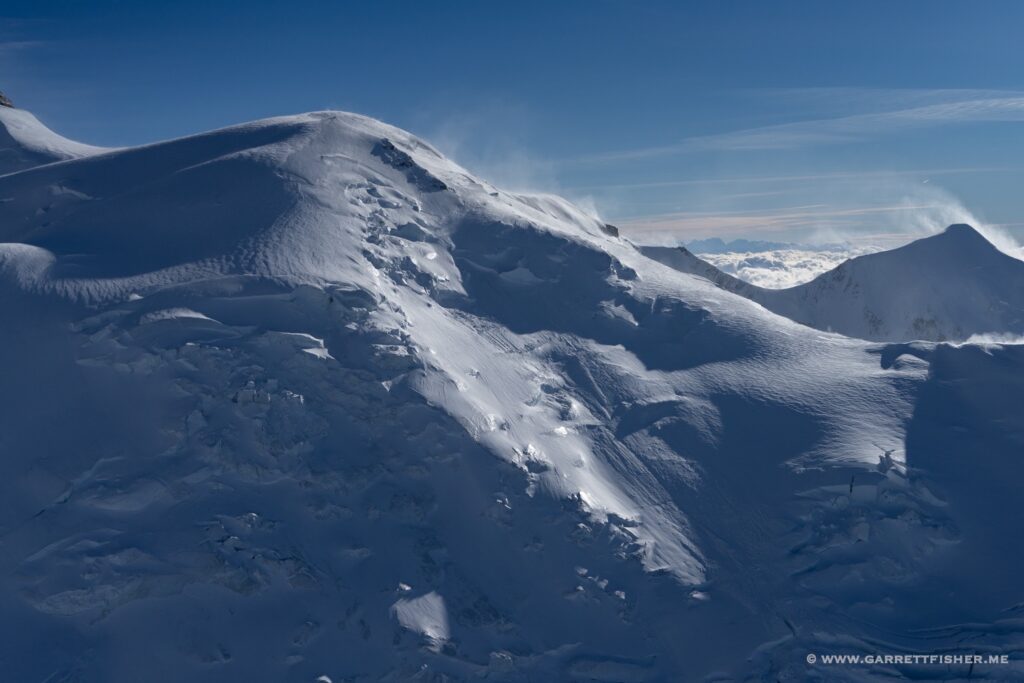 Up we go in the wind! 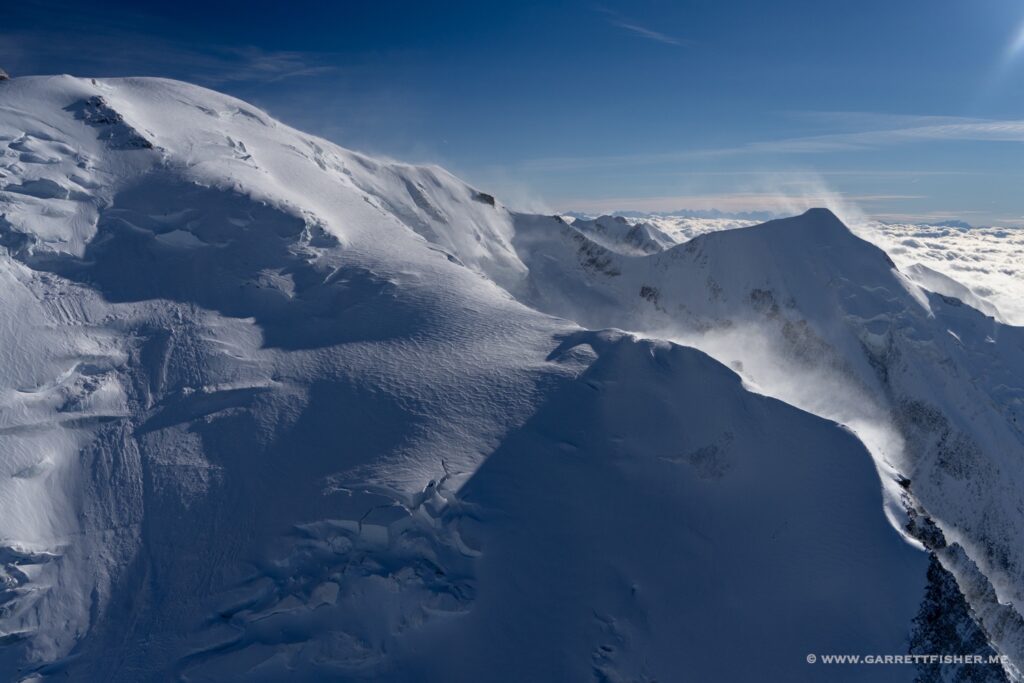 The summit on the right. Such blowing snow I find to be delightful. It is not frequent in an aircraft, as it is a sign of silly amounts of wind. 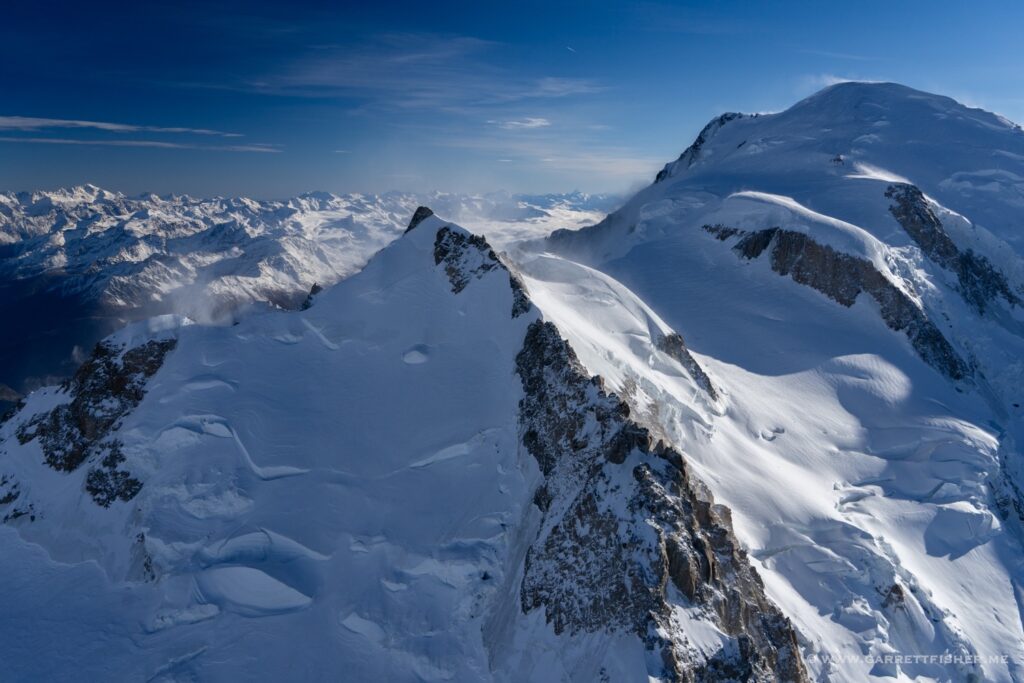 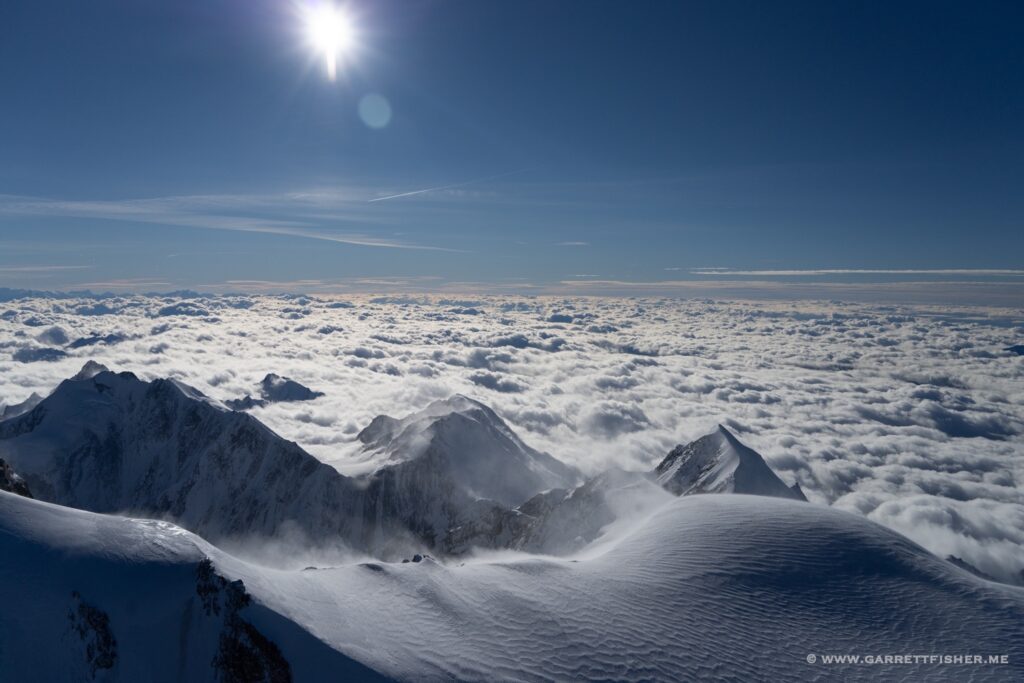 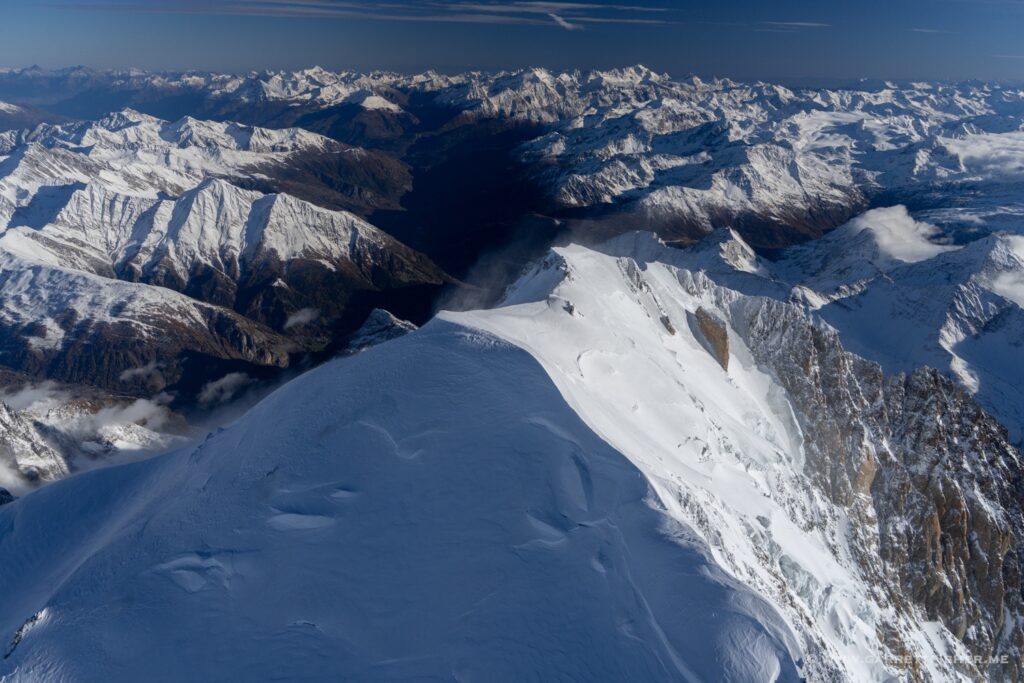 Working my way back down to reasonable winds (and altitude). 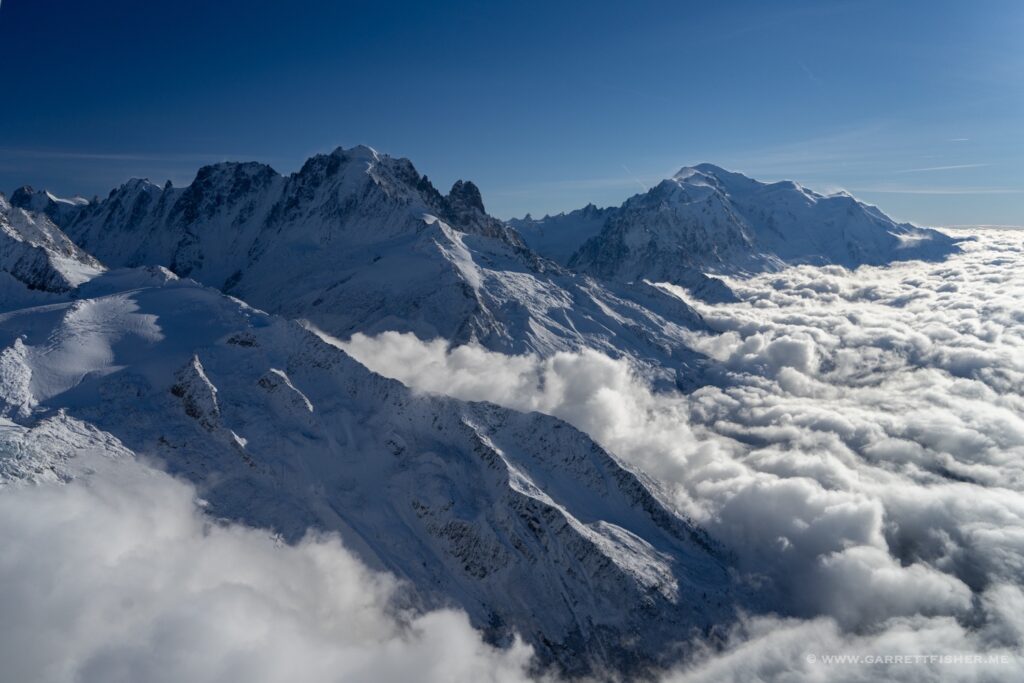