*For new blog subscribers, there are always pretty pictures at the bottom of my long-winded essays.*

So, yes, maybe “the spark has become the trend.” That which is unique, interesting, and worth pursuing, previously an outlying act, has now possibly moved into the normal, thereby ruining everything. After my previous manifesto, an ever so tiny shred of sympathetic synapses began firing, leading me to ponder why hordes of hapless fools have decided to normalize ruining my day with their selfies and vapid travelogues.

While it may appear that I have the personality of a plastic bag when around people, I do, in fact, actually speak to humans every now and then, if the person in question doesn’t have the personality of a cardboard box. What I tend to find is a combination of hopelessness at present malaise, with a glistening hope when hearing of my poorly thought out wanderings. I then get indignant, reminding them that such incompetence on my part hasn’t necessarily resulted in a better outcome, and I am told, again, that my life is a continuous orgasm. Since this conversation has happened so many times that I question my own intelligence for continuing to have it, I decided to flip things around a bit.

In a nutshell, the barista I am usually rambling to is stating that my life is better, while meaning that the ability to try new things is in itself the ticket. Sure, that which I try may or may not work, but at least you don’t have to deal with [insert banality here]. Hmmmm.. there is sociological diagnostic potential in that concept. I decided to craft a handy graphic to describe what is happening: 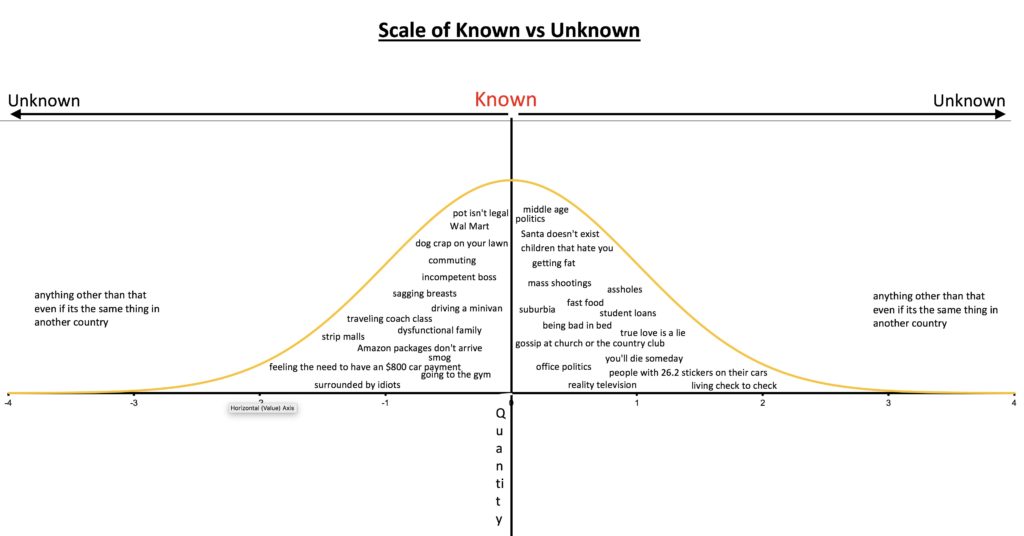 In a nutshell, day-to-day life is about as exciting as minimum-security prison for many people. Anything outside of the philosophical confines of such fatiguing boredom must be good simply because it’s not the misery in front of them. Actually, it can get a lot worse, just look at the third world, or talk to the billion people on earth who live in extreme poverty. But anyway, this blog is apparently about elitist, out of touch issues of superlative self-actualization amongst a world bent on crumbling against itself, so it’s time to practice the fiddle some more before Rome burns.

The question is why the unknown, particularly expatriate and travel-related unknown, becomes the default answer as a counter weight to the doldrums of suburban and middle-class imprisonment. If someone is “traveling the world,” he or she is [unbeknownst to me] in a state of ongoing auxetically climactic bliss. Enter the Scale of Lies: 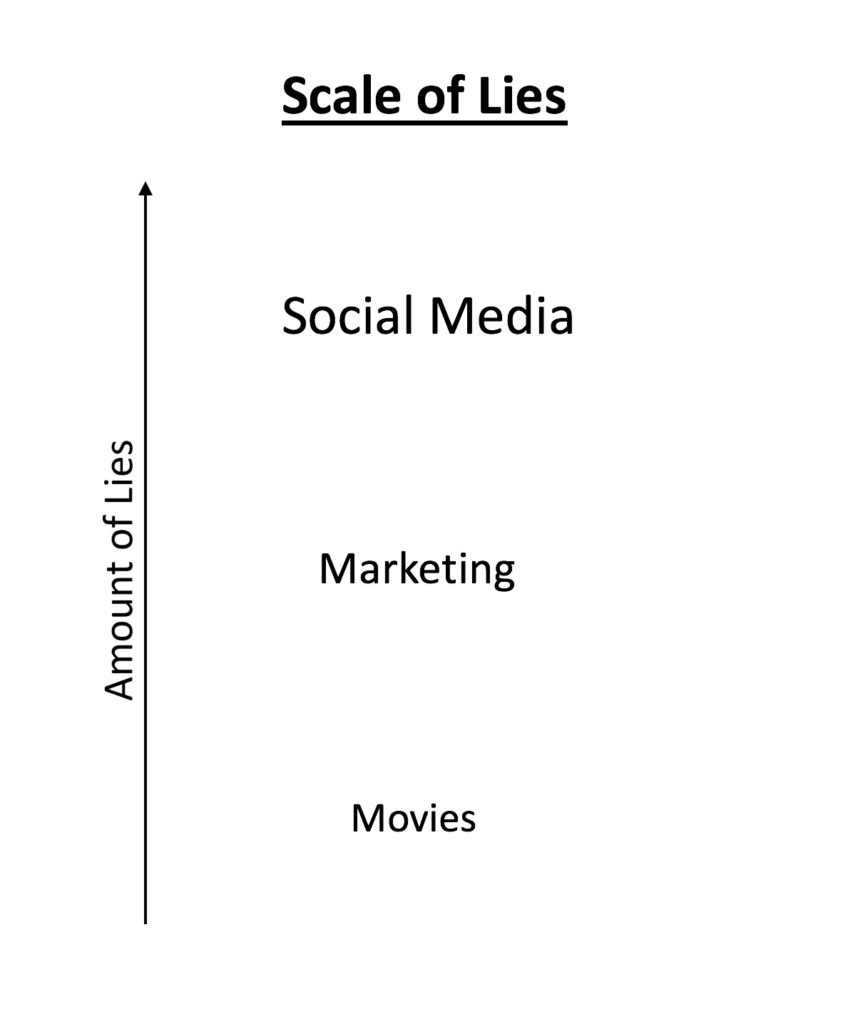 The Scale of Lies is merely a chronological iteration of a similar theme, magnified in concert with the mechanisms for which humans have technologically interconnected. Our minds are associative machines; if we see a photo of people happy doing something, we assume we will be happy if we do that thing. Even worse, we often feel as though we are missing out if we fail to participate. I could throw another dimension here to confuse things: wealth as a social construct. Dating back to British aristocracy, travel as we recognize it and glorious destinations were the sole domain of the extremely wealthy, making the prospect a dream for the barista of yore. I am too young to understand how the average person, if presented with the chance in the 19thcentury to travel the world, would have felt. Would it truly have been an internal experience versus a social demonstration? Probably, though I can’t prove it. Anyhow, enter the silver screen, and now our dreams become mass marketed fantasies. Regardless of what the wealthy actually do, some of their extroverted habits, or at least the habits we know about, have become enshrined as a gold medal in the Olympics of social imitation, teaching us that the things wealth brings are the happiest things on earth, that we would be happy doing them, and our dreams should be filled with aspirations to find ourselves in that position, regardless of the soundness of our economic plans to achieve a quantity of wealth necessary to support such apparent bliss. The associative machine upstairs has now conflated the products of wealth with alleviation from insipid quotidian acedia.

The Scale of Lies shows how it gets worse. If it wasn’t bad enough that we have been duped by tinsel town, a long line of tour operators and capitalists follow behind, selling vacations, products, “experiences,” and illusions, allowing us repeated doses of illusory crack. Social media has merely inserted a coefficient in front of a continuously fermenting brew of delusion: we become the stars, showing off manicured and completely inaccurate perspectives of how happy the social media personality is doing the thing that was sold to him or her, which was learned on the silver screen, which was a product of raging jealousy at antiquated Edwardian wealth inequality.

Here is the conceptual dichotomy endemic to these scales of disinformation: would a person elect these activities, travel to these places, and take selfies in front of these monuments, if a photo had not been presented showing it as desirable beforehand? Further, if a person desired to depart their life filled with a fattening midsection while sitting in traffic in a debt-financed minivan, what plan would an average person devise, in line with their realistic income potential? Of course humans would love to have vast sums of financial resources in excess of their current position; who wouldn’t? Absent a plan to get there, why spend an allotted annual vacation hopping on a plane to act, for a brief moment, like a long dead wealthy aristocrat, merely to return to the doldrums and whine about it?

There isn’t a straight answer to the equation. In many respects, it embodies eponymous philosophies about journeys and the meaning of life. It would be useful to remove repetitive headbanging against the wall and avoid trying the one thing that is certain to not work: traveling to places completely decimated by tourist overload while expecting to discover something significant and meaningful.

Now that I got that out of the way, this flight was the day after the prior one. I was going to skip it, except the next blog post is extremely important, is a rant to top all rants, is directly tied to the flight that happens after this one, and needed to be in chronological order, so I used this flight as fodder to create chronological space before I gear up for the big one. It’s a fitting flight; after all, I took the Cub around a mountain range visited by 120,000,000 people each year and inhabited by notoriously wealthy people while bashing the concept of visiting popular places, as I wrote it while sitting in the most visited country in Europe. 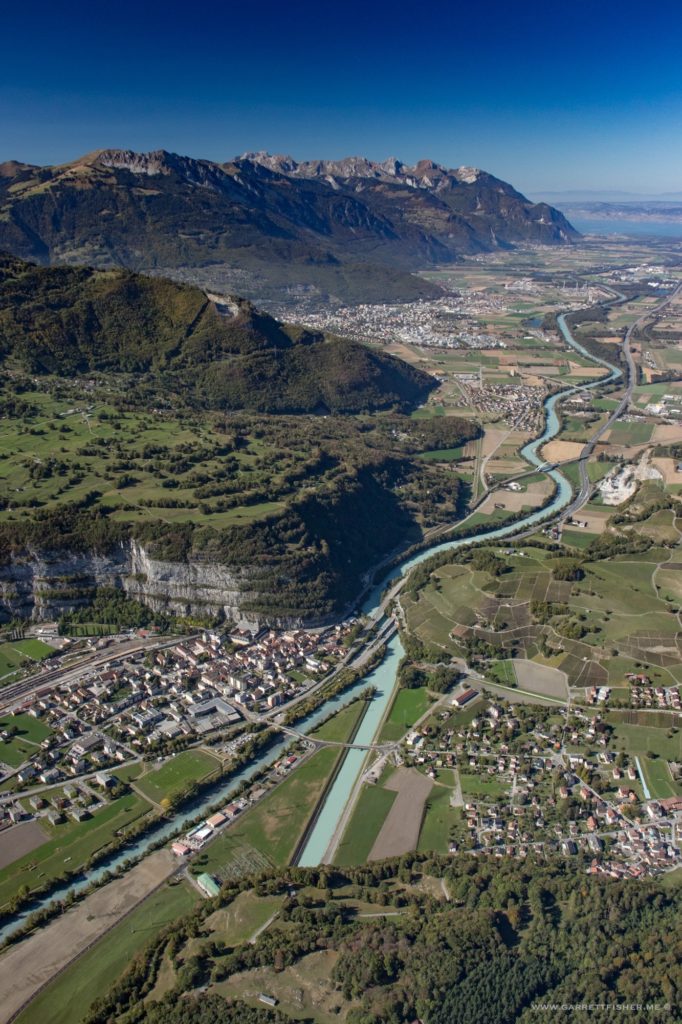 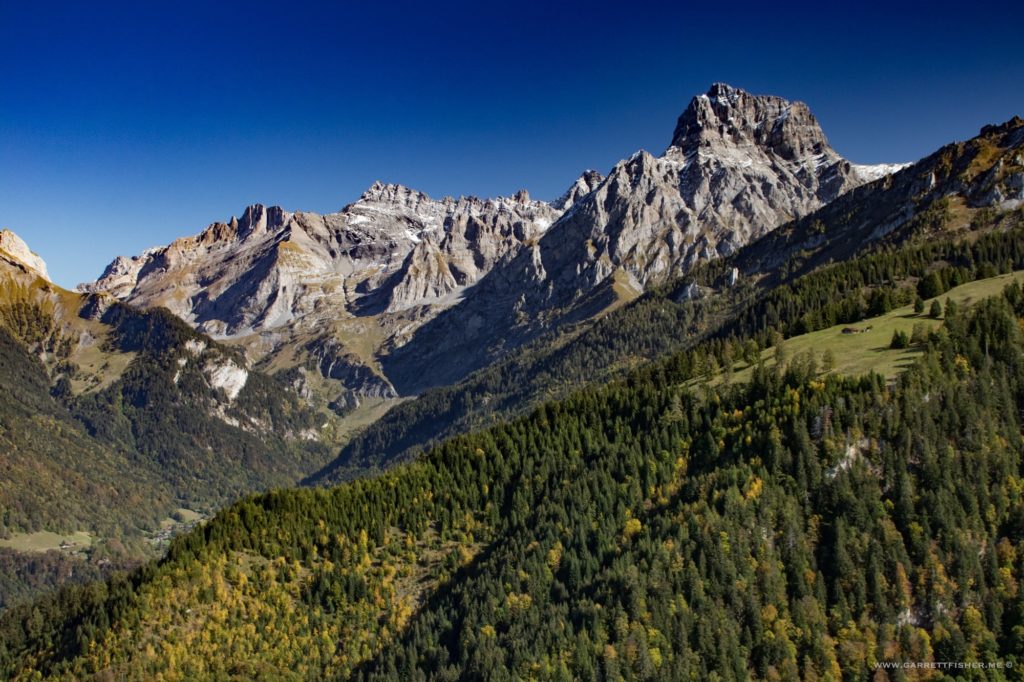 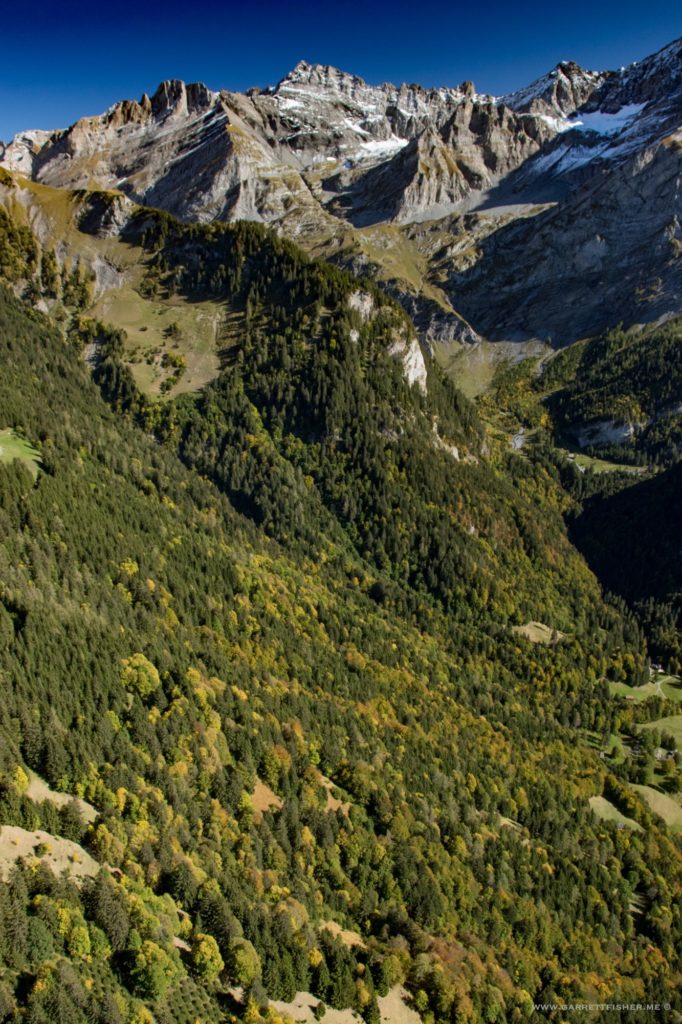 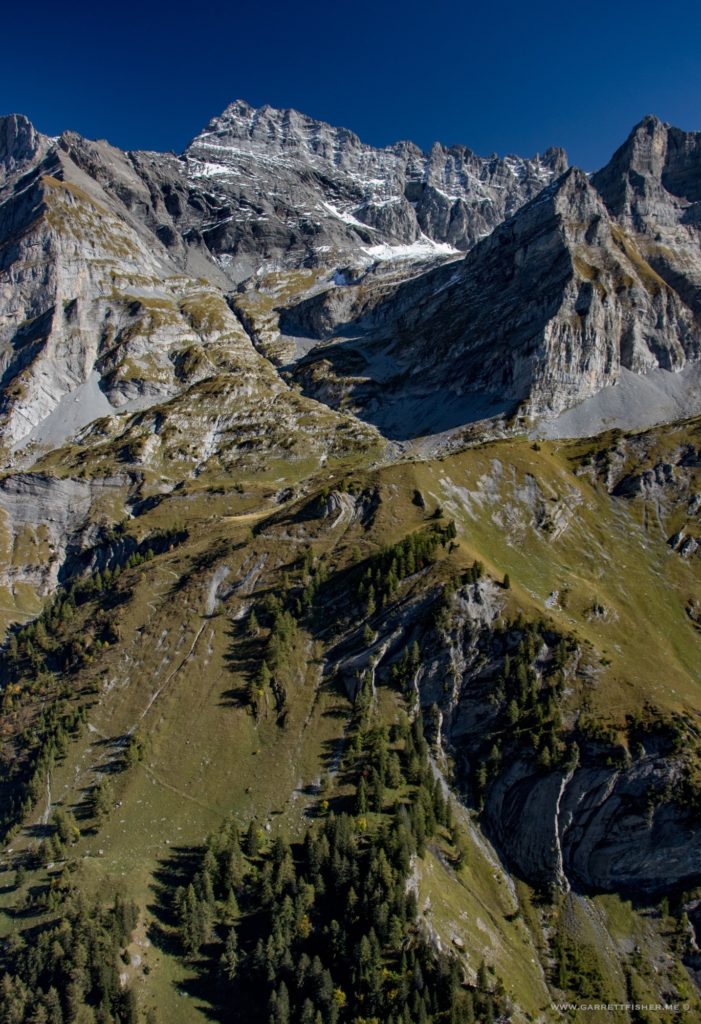 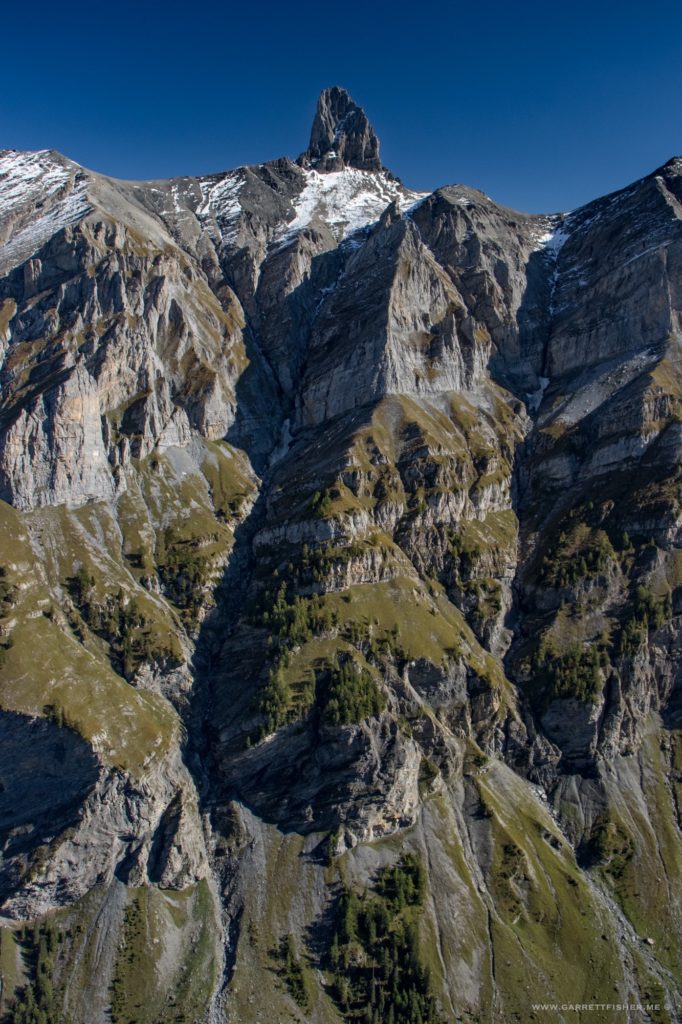 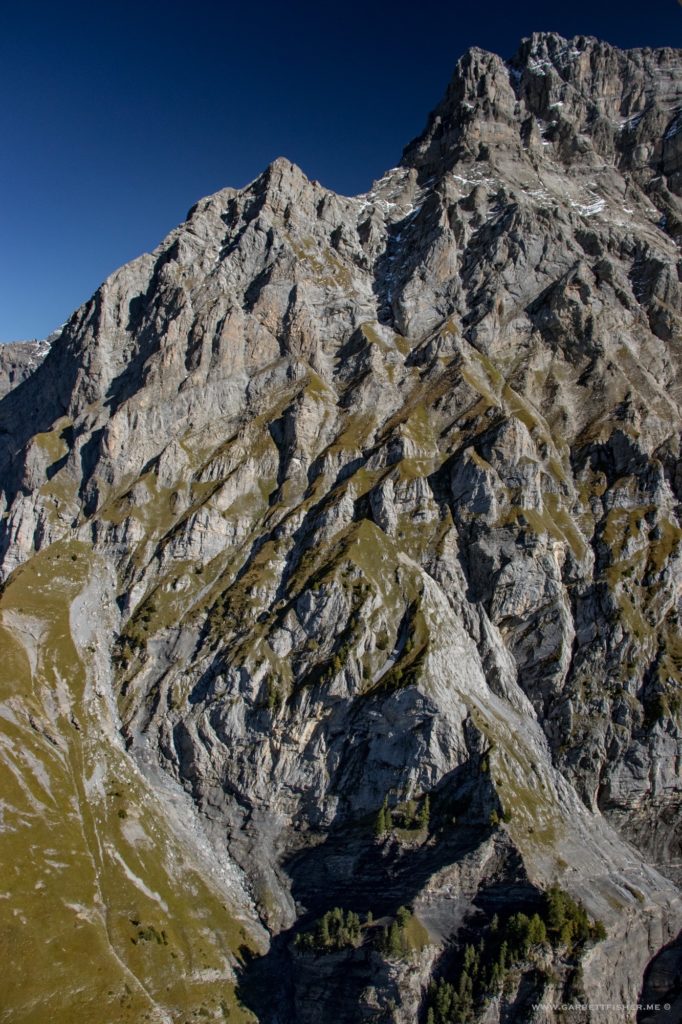 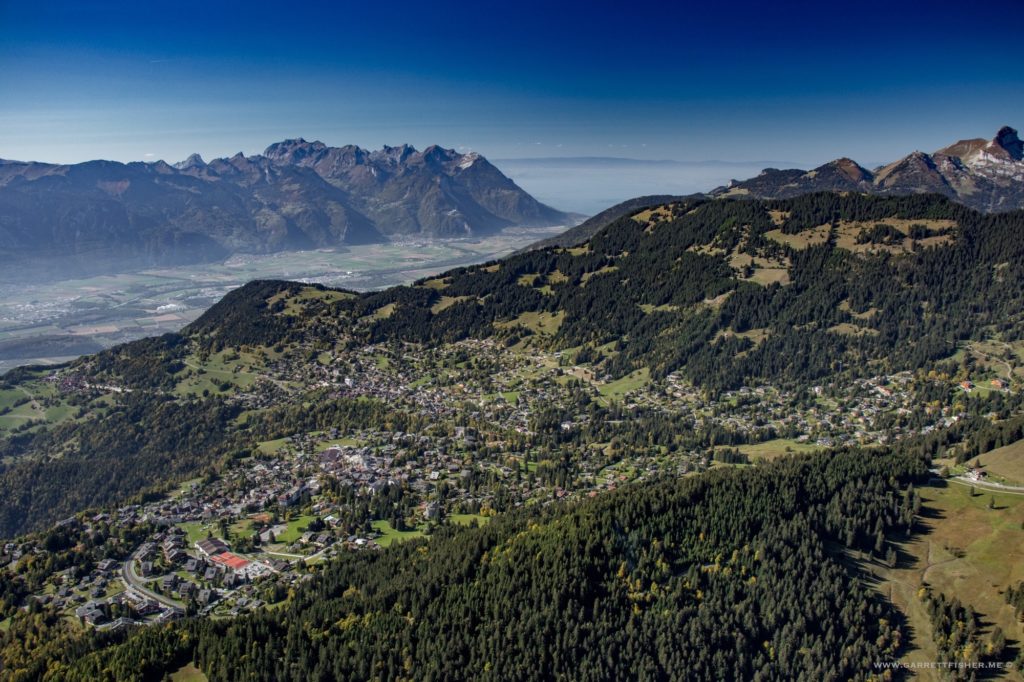 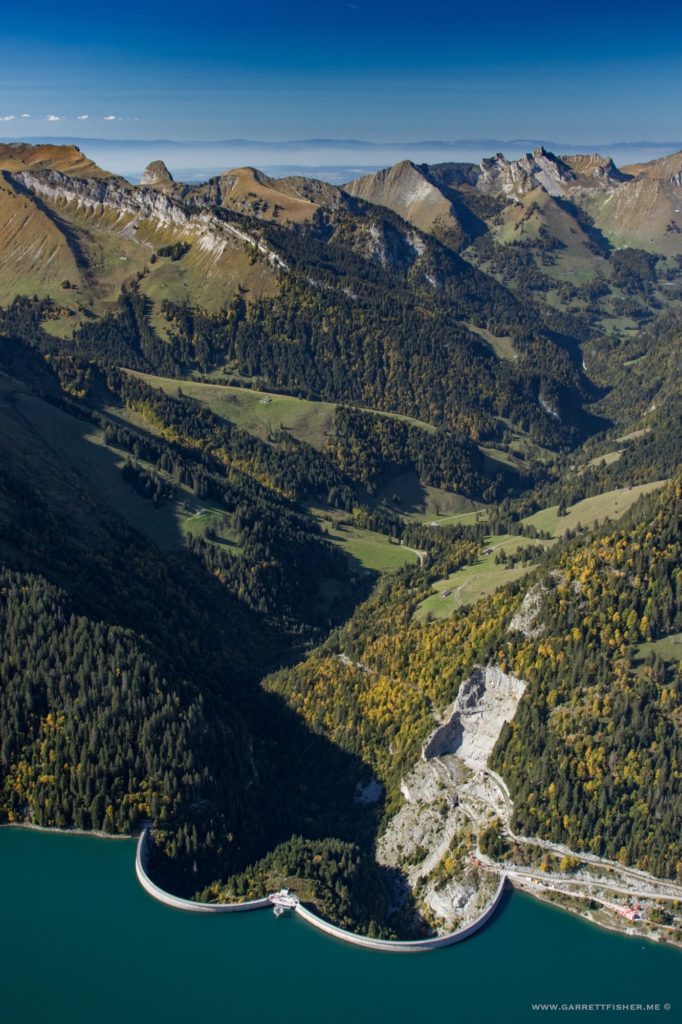 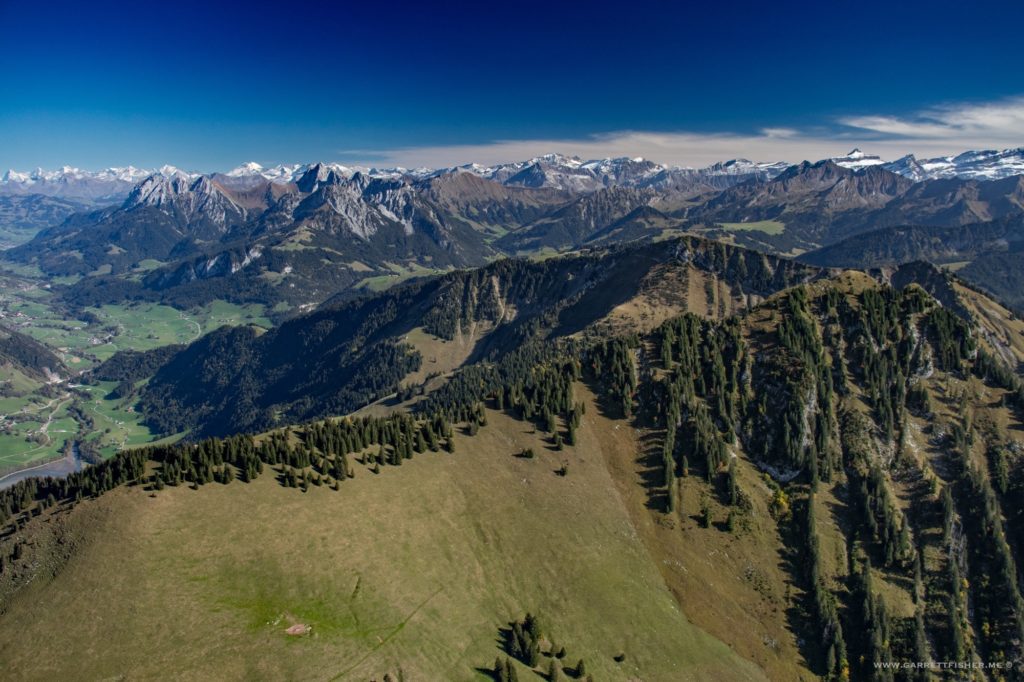 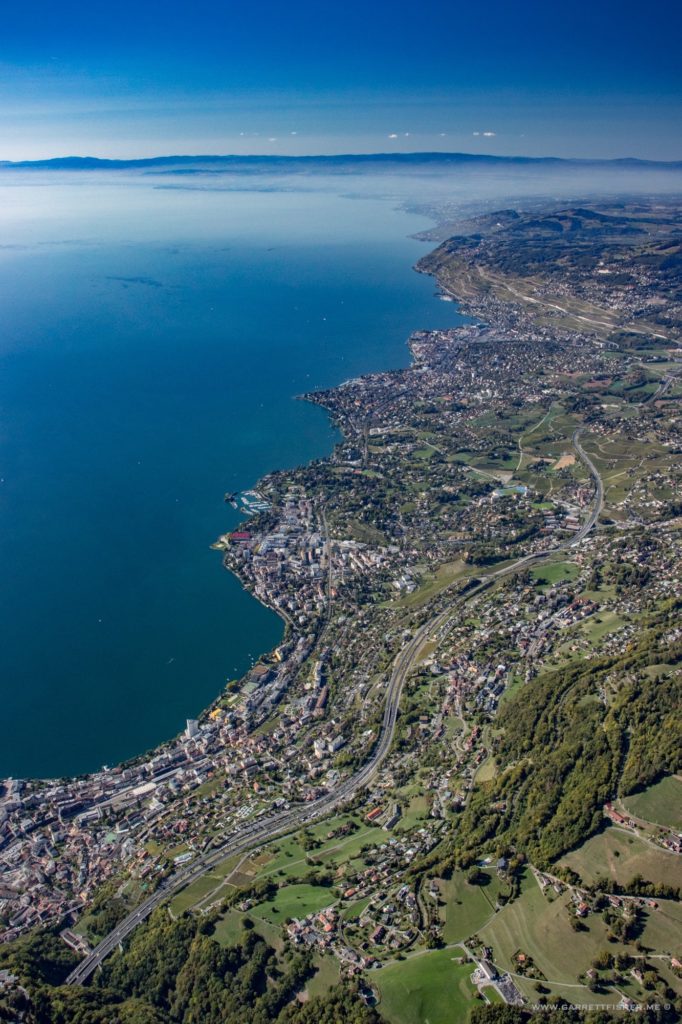 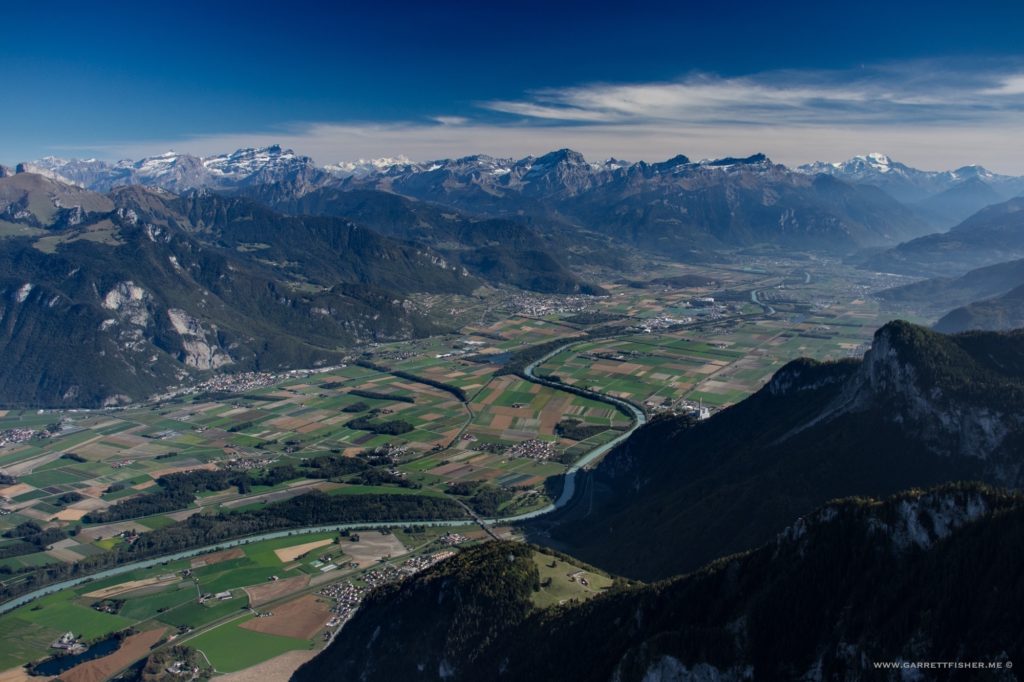 Chablais Alps with Lake Geneva behind. 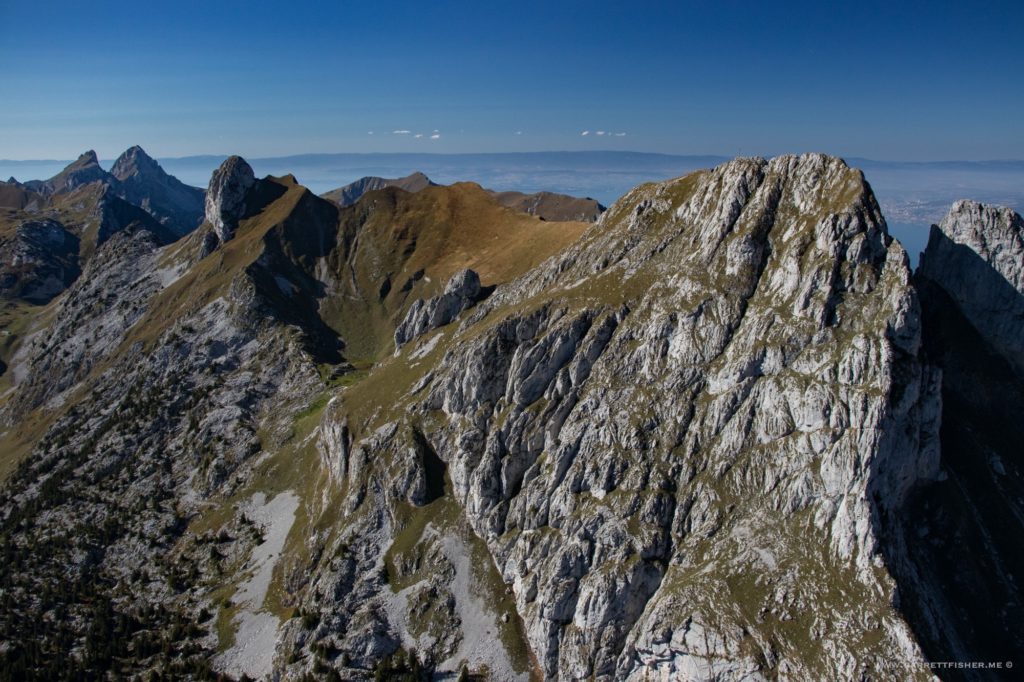 Les Cornettes de Bise. France on the right, Switzerland on the left. 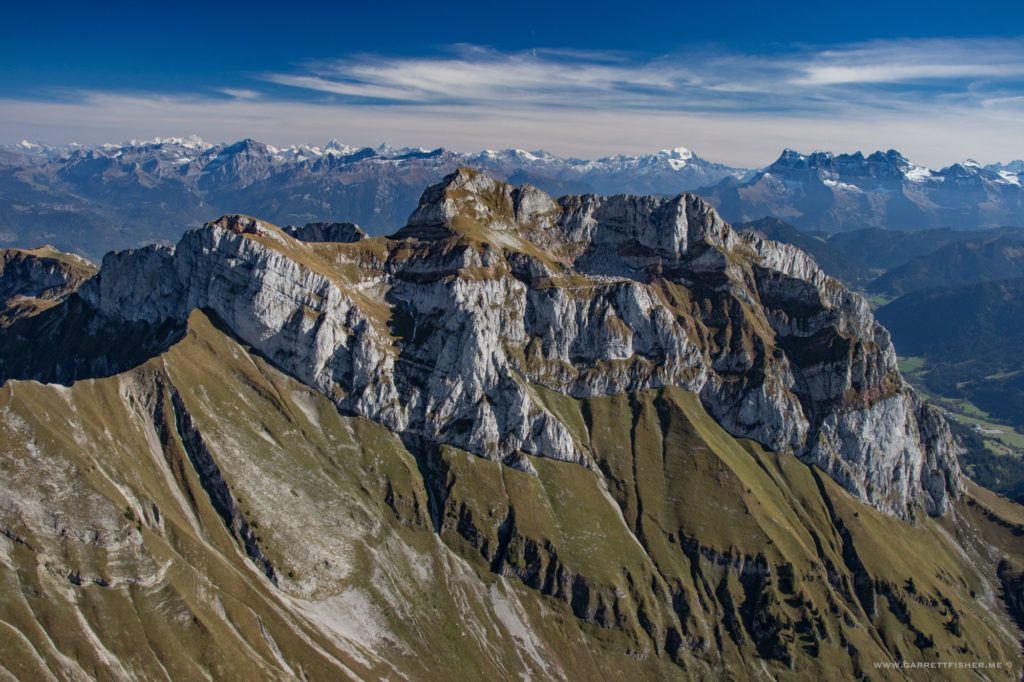 Avoriaz, France on the left. 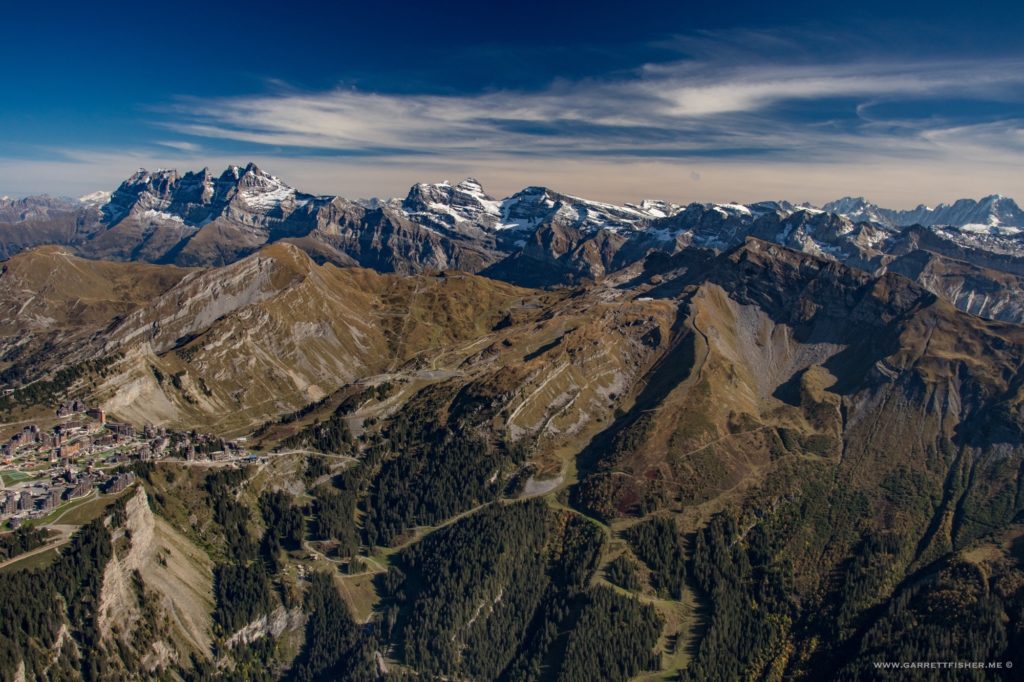 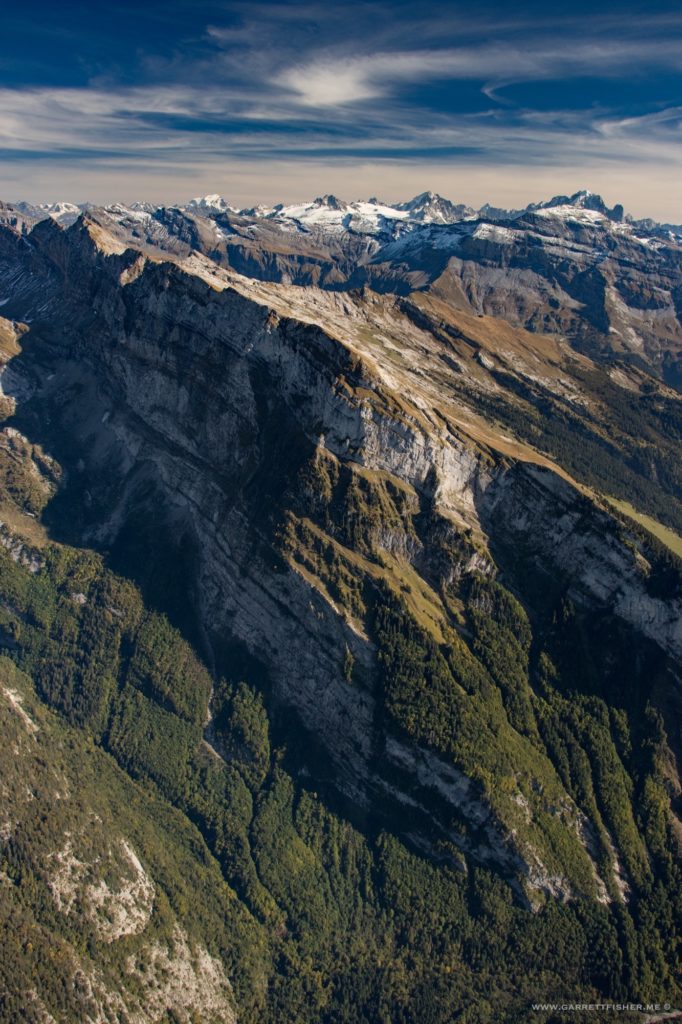 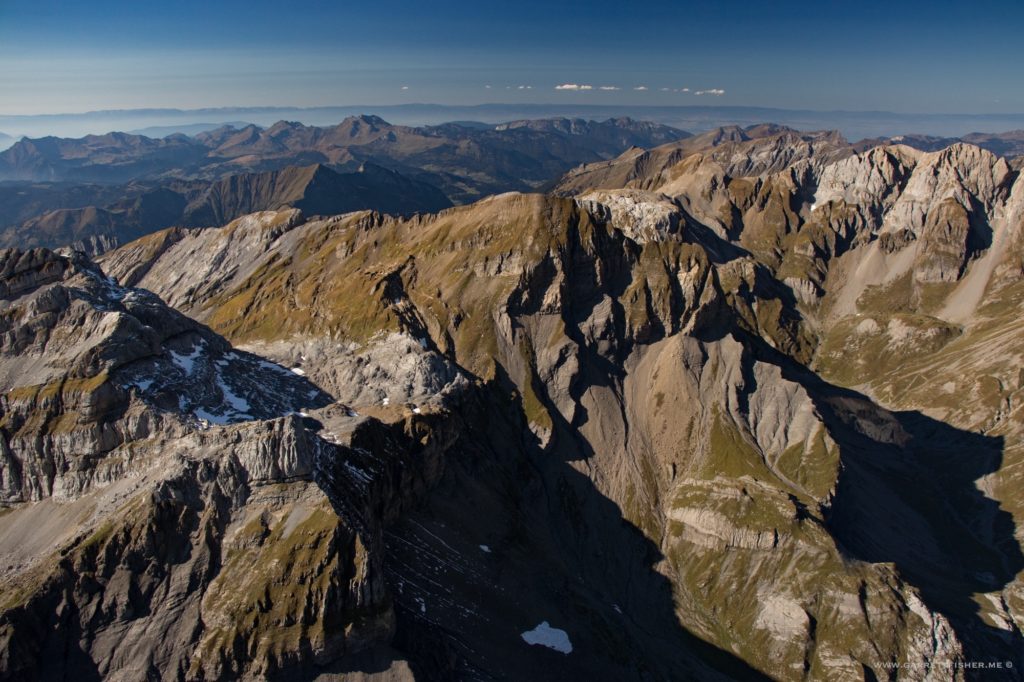 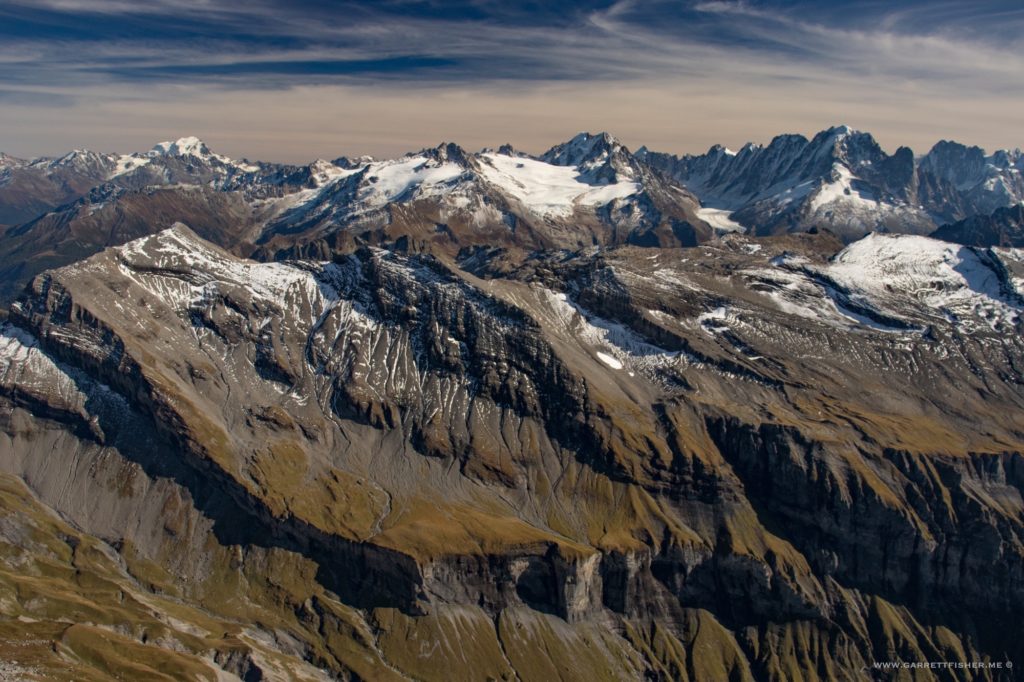 Mt. Blanc, with Chamonix lurking below behind the rock in the foreground. 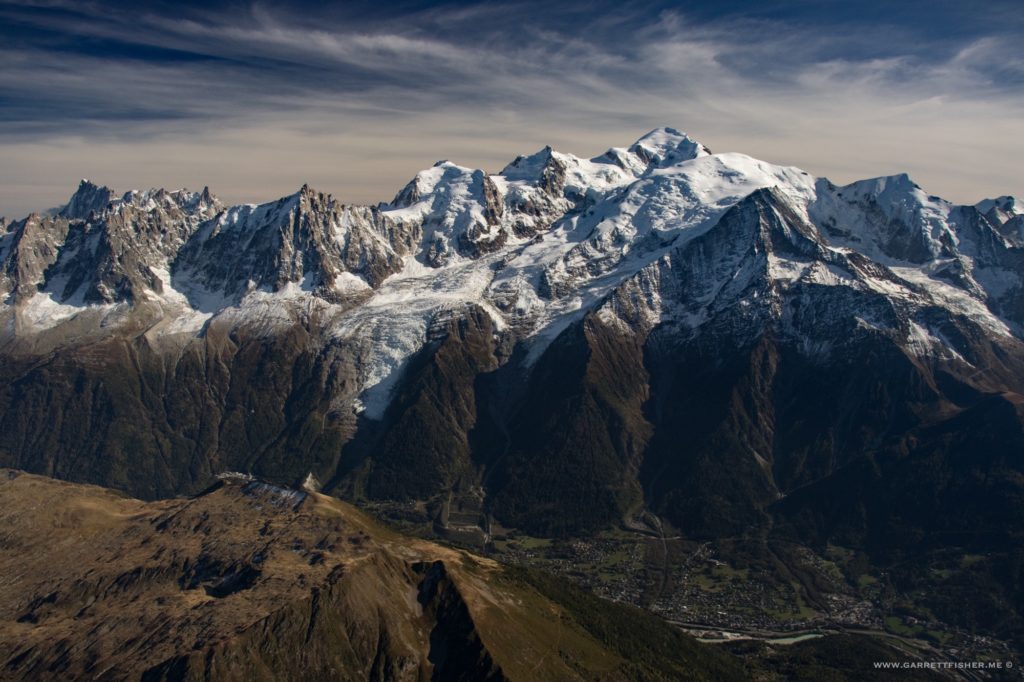 Southwest end of the Mt. Blanc Massif. Italy in the foreground, France in the background. 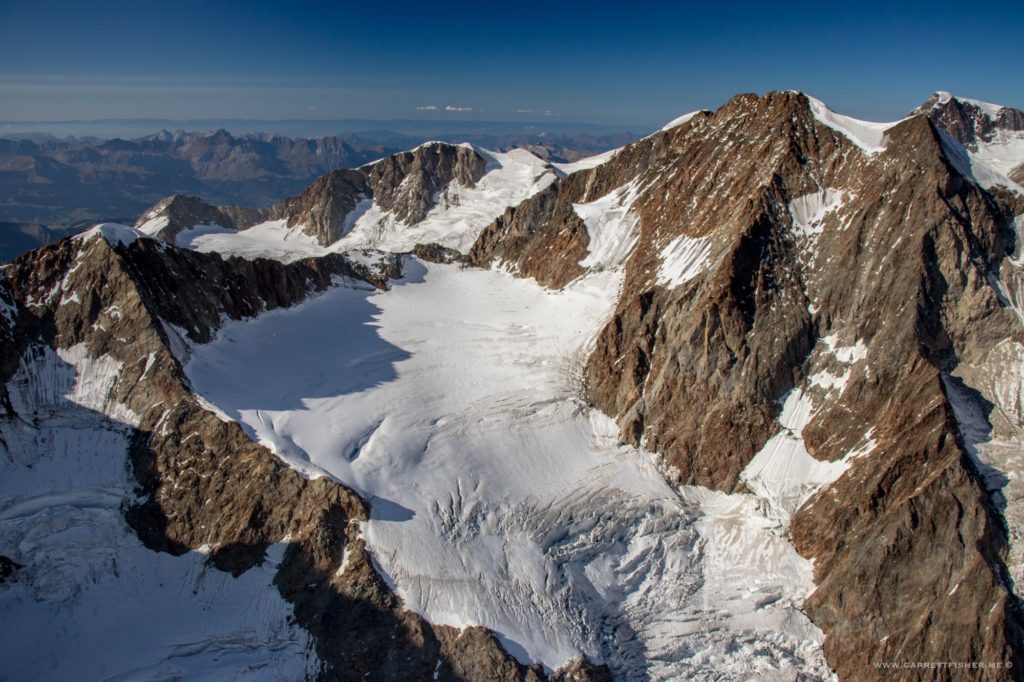 North side of the Massif. Back in France. 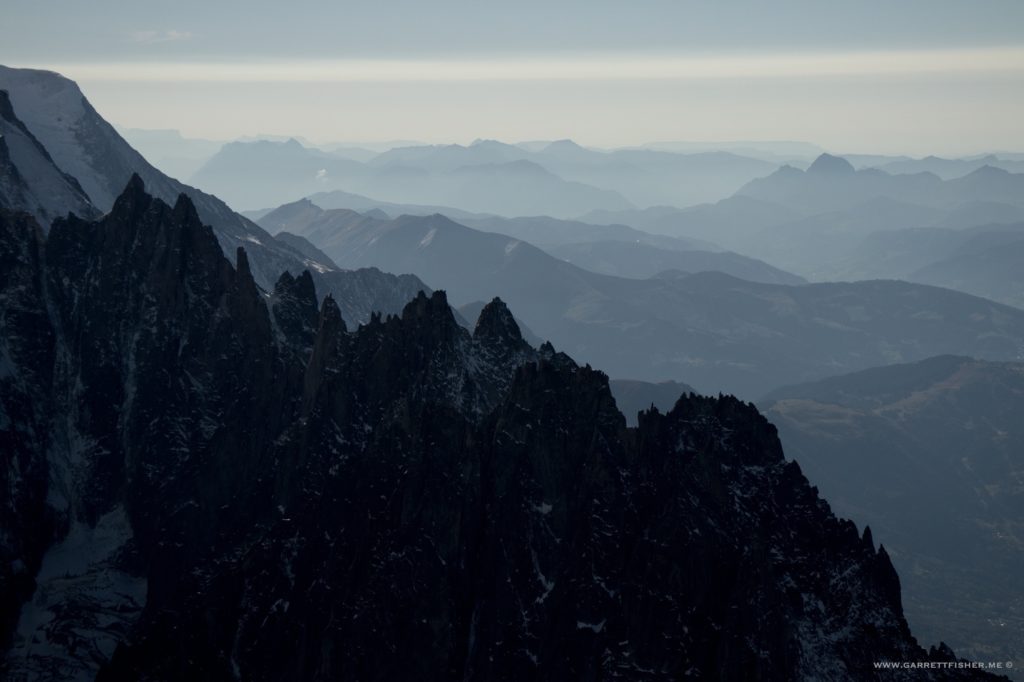 Aiguille du Midi, with Mt. Blanc to the right. 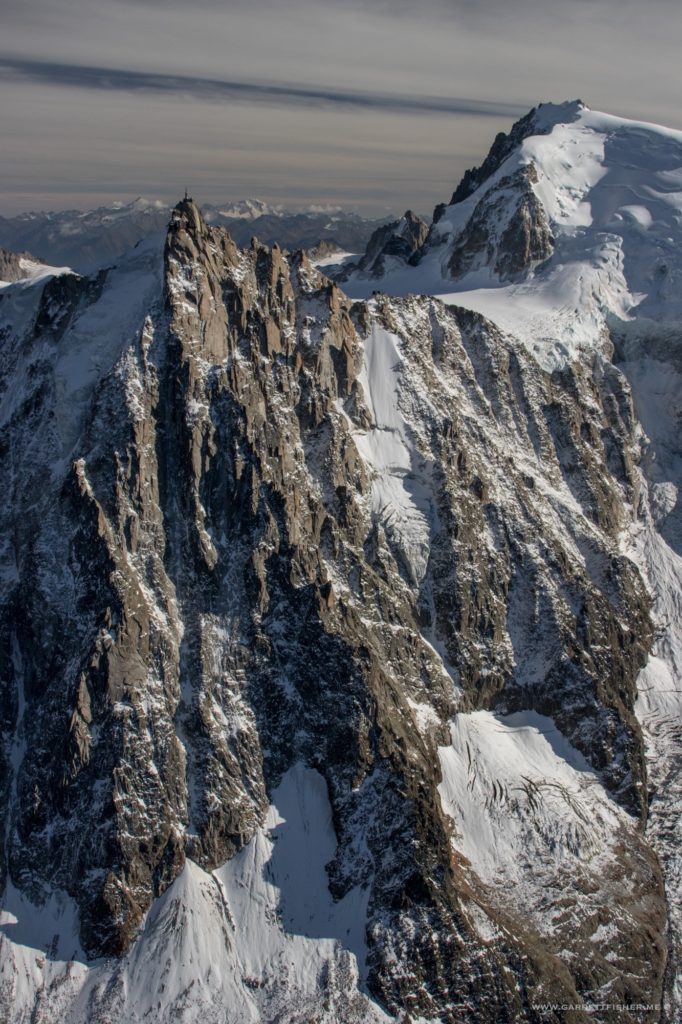 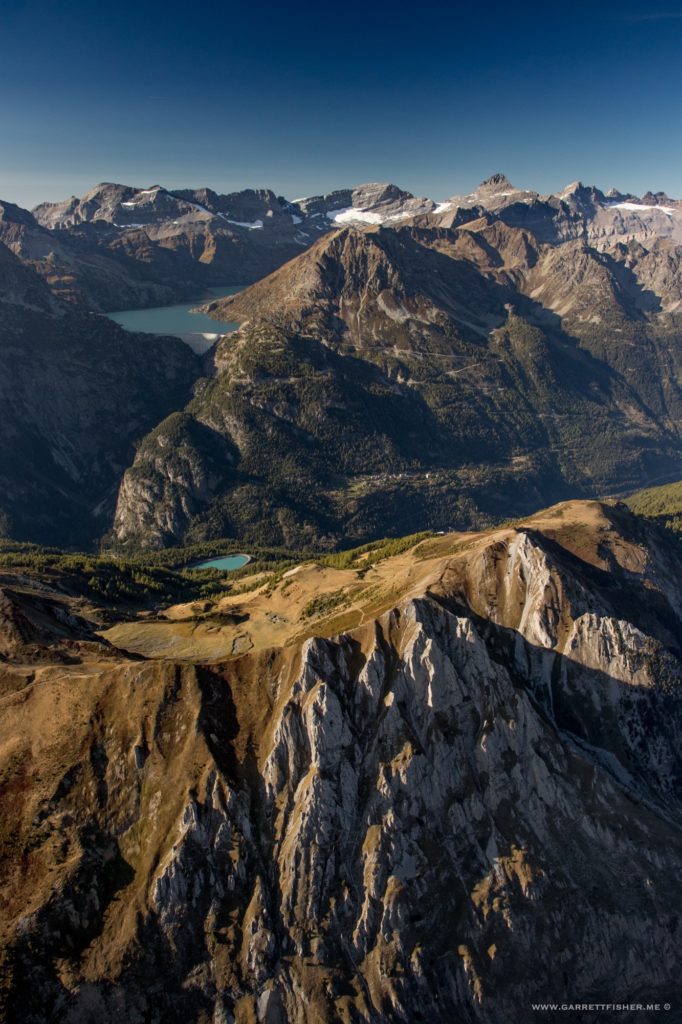 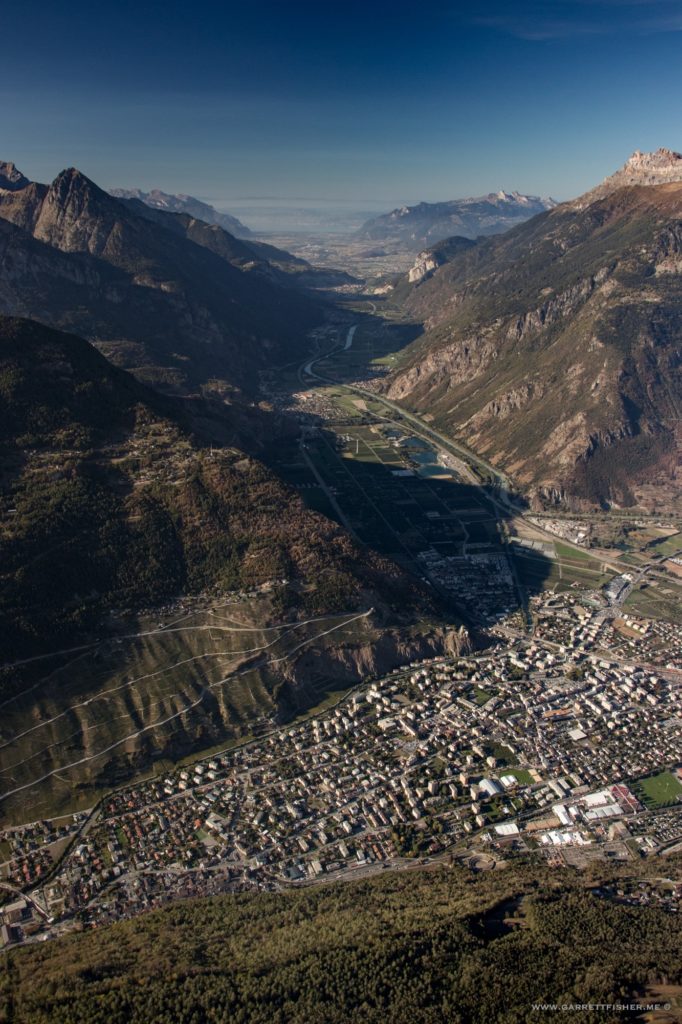 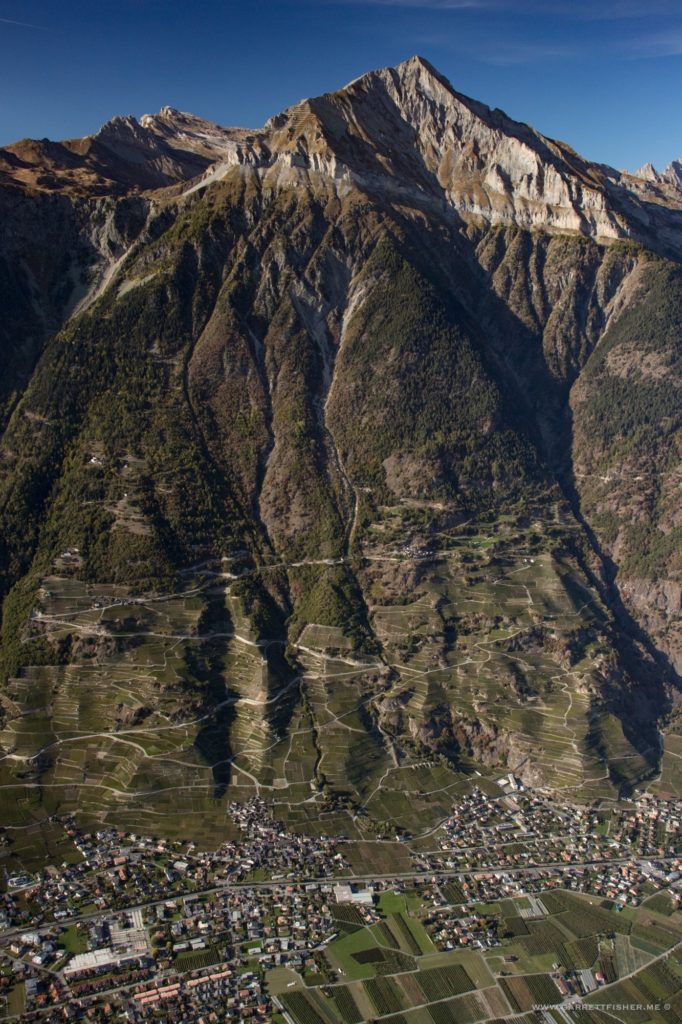 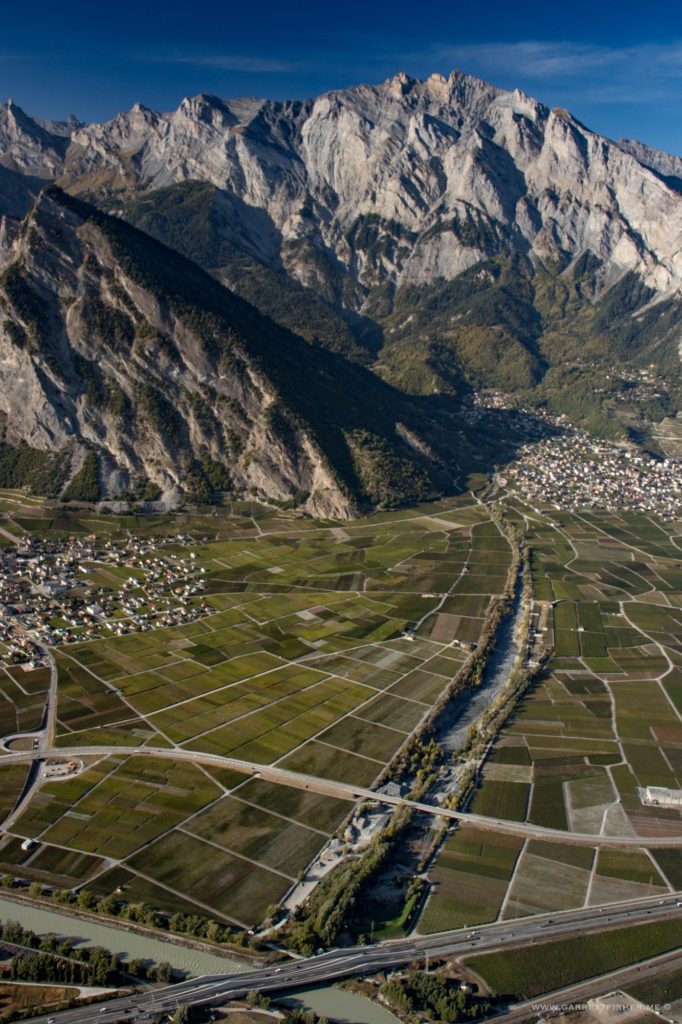