It was one year ago today that I took an illustrious flight from Sion to Saanen, Switzerland, then a three-hour flight around the block (Interlaken, Jungfrau, etc), and then went back to Sion, over the Pas de Cheville. I arrived home from what was at the time possibly the most incredible flight I had taken to find out that the inspiration for my aviation activities was entering hospice. My grandfather died 18 hours later.

Now, before one gets some presumption this is a weighty boo-hooey fusillade of grief and despair, fear not. If you’re a regular reader, then one should know that my prose eventually finds ways to connect the most transcendental, deep, poetic, spiritual, stirring, and profound experiences into cynicism on a regular basis.

It is interesting one year later that the weather was basically the same, the scenery just as gorgeous, and I found myself and the airplane within 40nm of the place it was a year ago. What better thing to do than go flying to mark the occasion?

That stirs a memory from the year 2007. My father had just been diagnosed with terminal brain cancer, so I did the whole ceremonial drive to New York from North Carolina, you know, “normal” family stuff. It wasn’t the least bit awkward that most of the immediate family hates each other, but oh well, what is the abyss of death for, but to keep appearances?

One would presume that my grandfather would be shaken up at the prospect of his only son preceding him in death, so I stopped in for a visit. Well, there is that, and the fact that my grandfather was one of the few in the family that I liked, and my grandmother, prior to some apocalyptic zealot miswanderings, made one hell of an apple pie.

I arrived at his house, and there was the Bell 47 helicopter. Granted, I had heard of his new toy, but I hadn’t ridden in it. At age 76, he decided that a Super Cub was too boring (to fly and get a burger), so he got his helicopter license so that he could fly over the hill (and get a coffee). There the beast was, gleaming in the sun. Am I greeted by a morose, grief-stricken patriarch weighted down by the burden of the younger generation dying before the old?

“Get in.”
“Um, is this a good idea?”
“Yes, it’s a nice day to go flying. Here’s the passenger side.”
“Are you going to pre-flight this thing?”
“You get in on this side and put the seat belt on like the Cub.”

Right. So, tossing caution about the “pilot’s mental condition” aside, I hop in, contemplating my mortality.

After preflight checks are done (he actually used a checklist for the first time – I am not sure how that makes me feel), we ascended with alarming speed, reaching about 250 feet, before he settled into a hover, staring at a gauge. Then we began descending, for which he brought it into a hover over the runway. “So, what are we doing?” “The RPM is lower than it should be.” “Is that normal?” “Nope.”

That problem resolved itself on its own, so we rocketed thousands of feet into the sky in a contraption I did not know how to fly, piloted by an old man who is either the pinnacle of mental stability, or is about to crack. It was a ton of fun.

This begets a conversation about my grandfather’s perspective on death. Whenever a pilot that we knew of cratered their airplane into the ground and met their maker, he would with a resigned tone inform me, “Well, [X] cracked up.” I couldn’t tell if it was the inevitability of aviation, the inevitability of death in general, or if he thought that pilot was stupid. Some years later, when he was talking with a mutual acquaintance who wanted to fly his Bonanza from New York to a tight little grass strip where I kept the PA-11 in North Carolina, he started the conversation with, “Mark and Jay want to come and crash their Bonanza at your airfield.” I guess he thought deceased aviators were dumb.

Nibbling a bit further into the death concept, my mother informed me a long time ago of my father’s apparent mental derangement, at the behest of his “crazy parents.” So I am told, when my mother’s mother died in the 1980s, two days afterward, my father got all indignant and asked, “Um, why are you still crying?” “BECAUSE MY MOTHER DIED TWO DAYS AGO!” “So, why aren’t you over it yet?” Why she did not commit assault at that moment, I will never know. I was 6, so maybe she did….

Apparently, my grandparents have this “shit happens” view on death. Go to church, attend the funeral wearing black, act sad (or annoyed….or bored – hard to tell really), return home, and go back to work. If the person was a cherished friend, don’t talk about it. If it was someone the planet is better off without, don’t talk about it. My father was raised in this environment and took it so literally that he opened his mouth to argue the idea of grief (to which I was instructed it was pure lunacy, and as an adult, I prefer the grandparents’ view). I believe my grandfather had adequate social awareness to slither away from that kind of conflict.

I honestly think if it were possible to have a conversation with him about such banalities as “feelings” about his death, he’d probably look at me funny that any time was wasted on emotion about an event that was so inevitable and expected. I literally had a dream a few weeks ago, and he was in it. My first words were (flatly): “I thought you were dead.” His reply was a look on his face like I was dumb and: “Well, I’m here.” 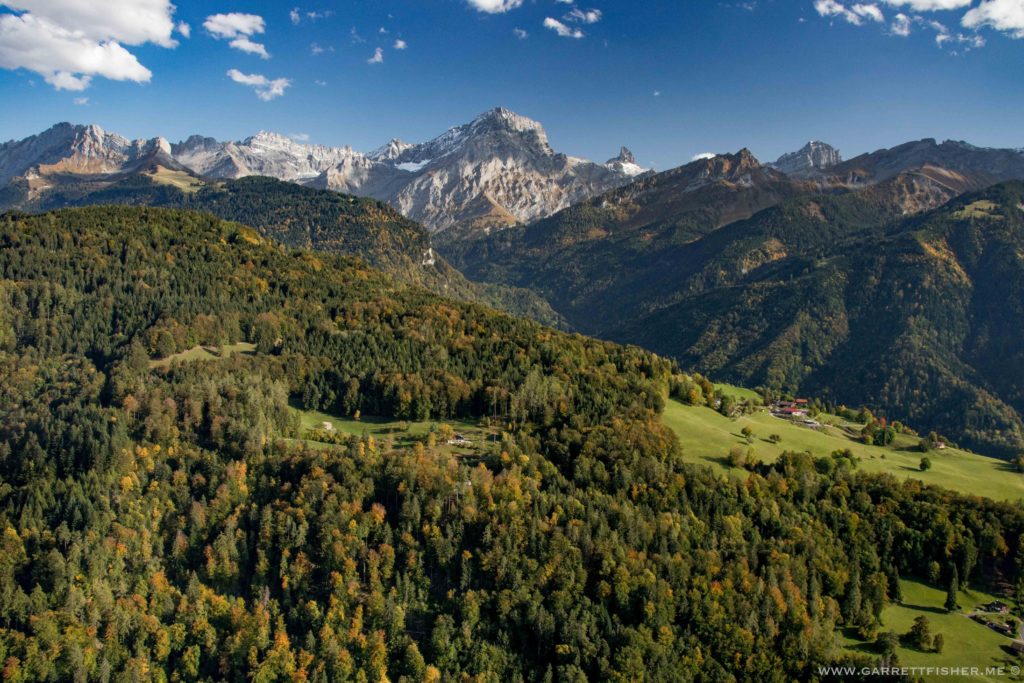 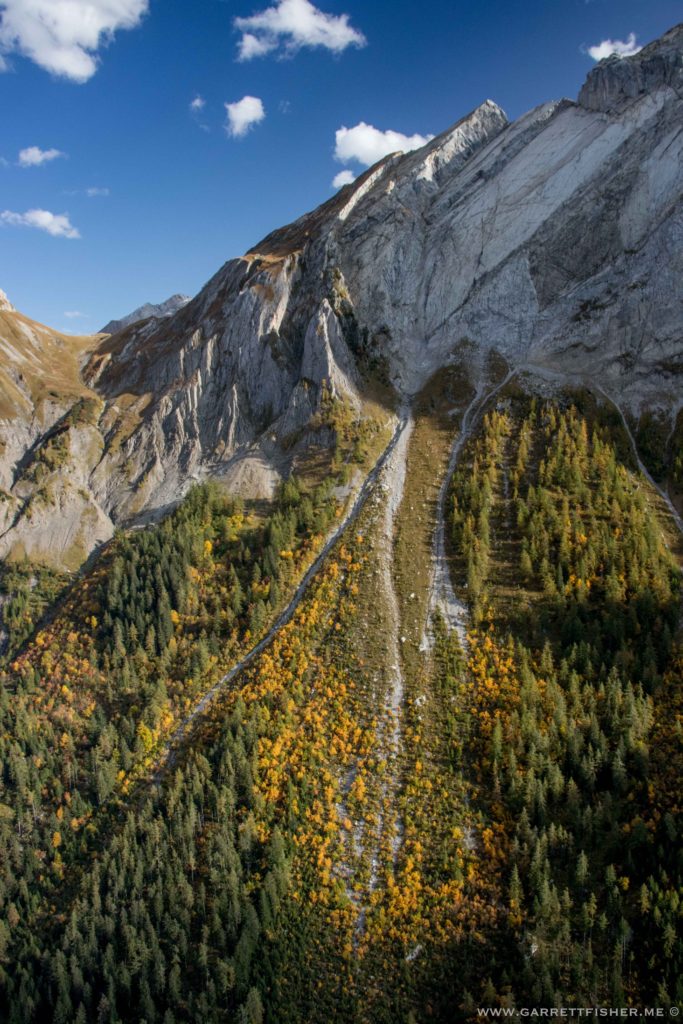 Up the valley in Leukerbad. A tad of fall color immersed in Swiss Alps glory. 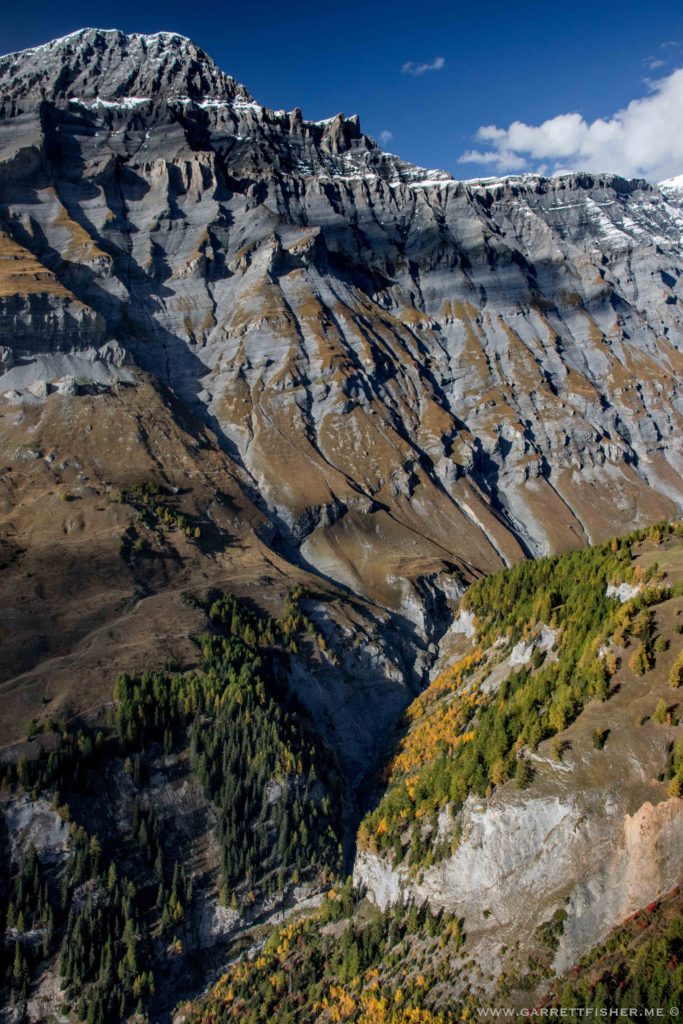 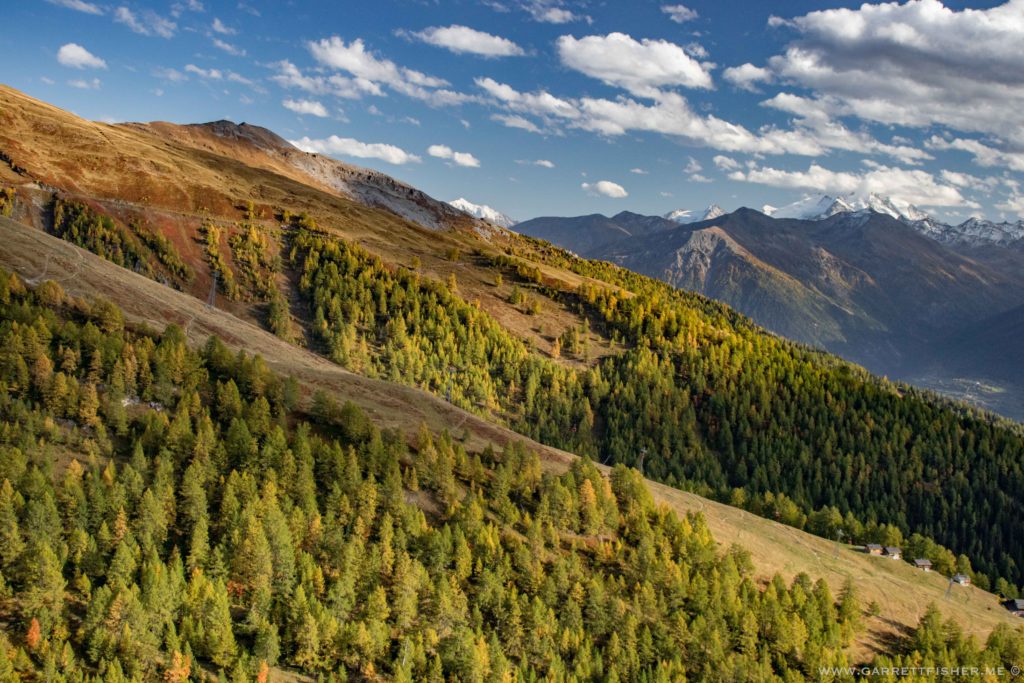 This is pure heaven. Larch trees in color with a bit of a glacier in the distance! Amen. 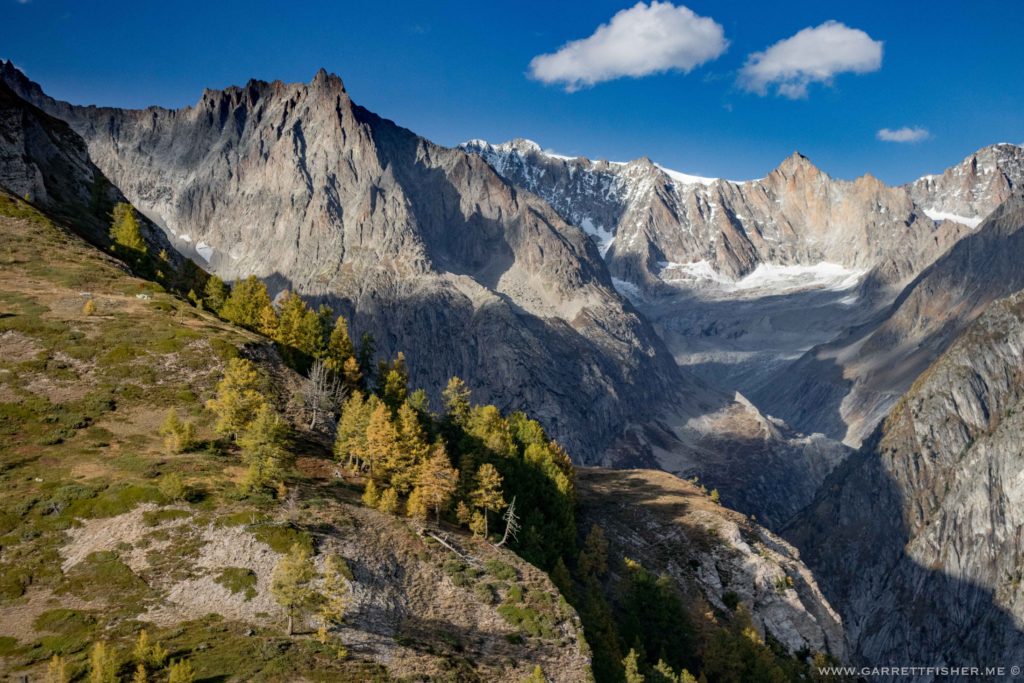 I flew up a ridiculous box canyon and this is the view on the way out. There were very old buildings accessible only on foot on these hillsides. 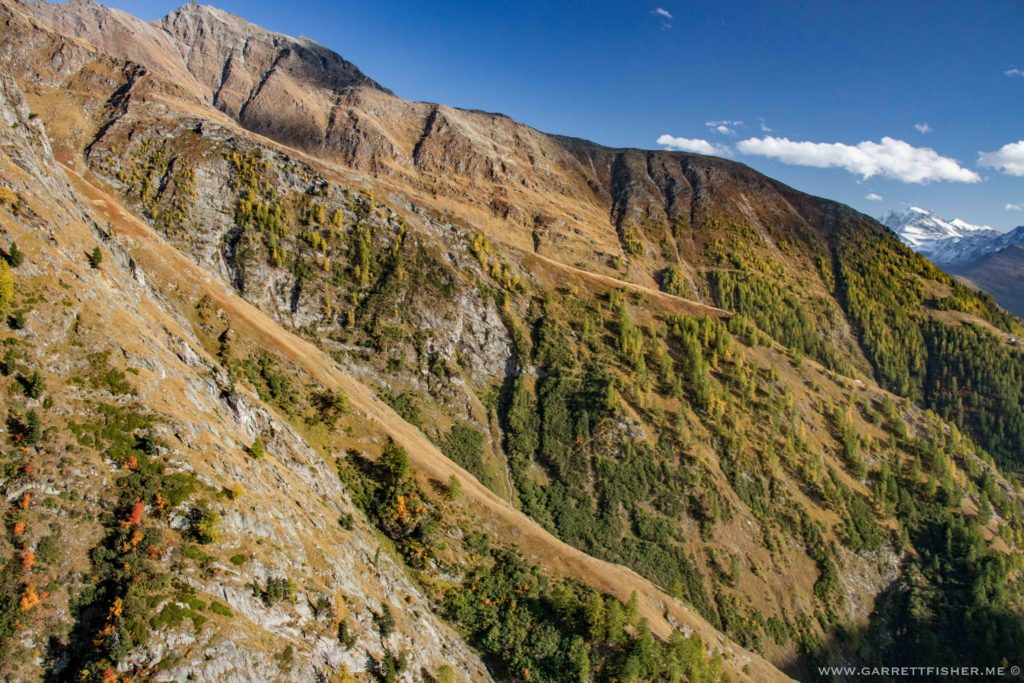 Above Brig. Glacier across the way, with larch trees below. The last time I saw something like this was the 49th parallel in northern Montana. 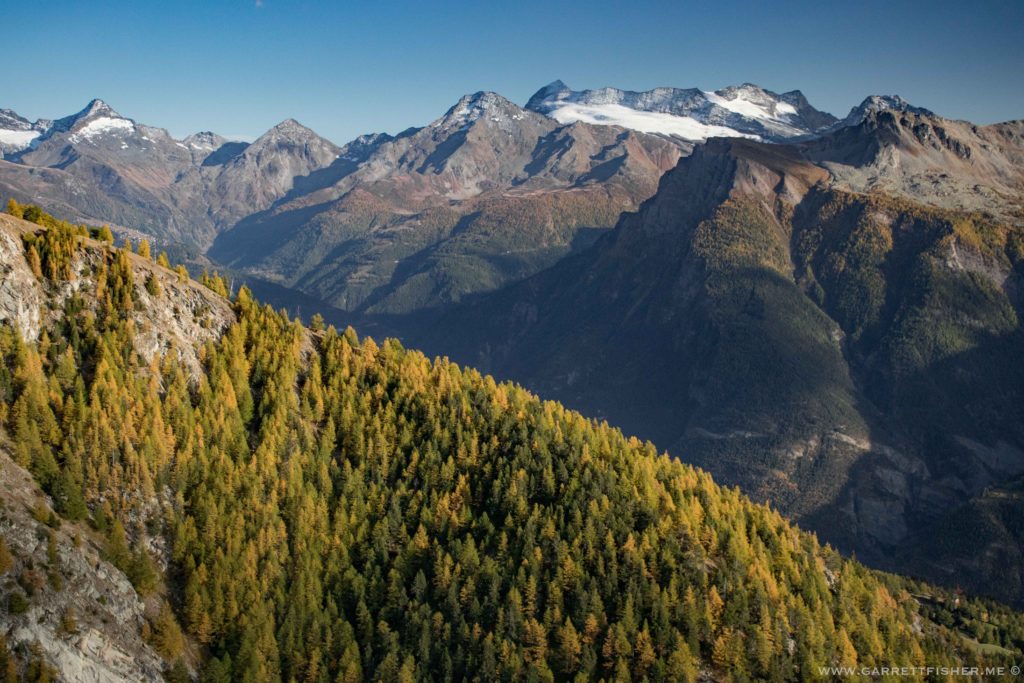 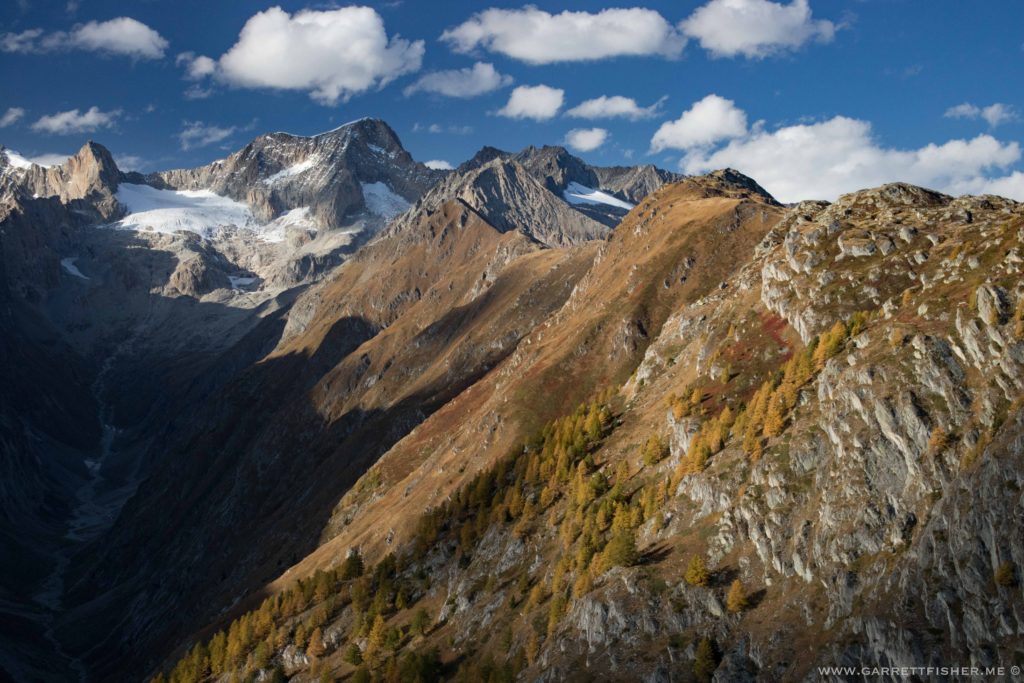 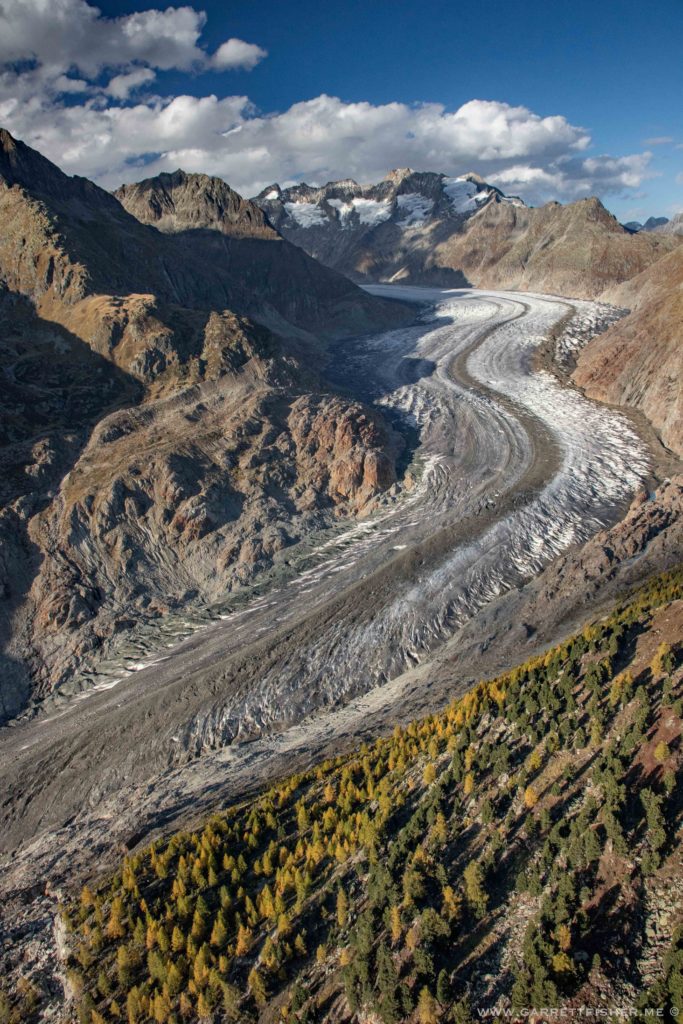 Simplon Pass, Swiss side. Flying here had the subtlety and serenity of riding a bronco. It was breezy. 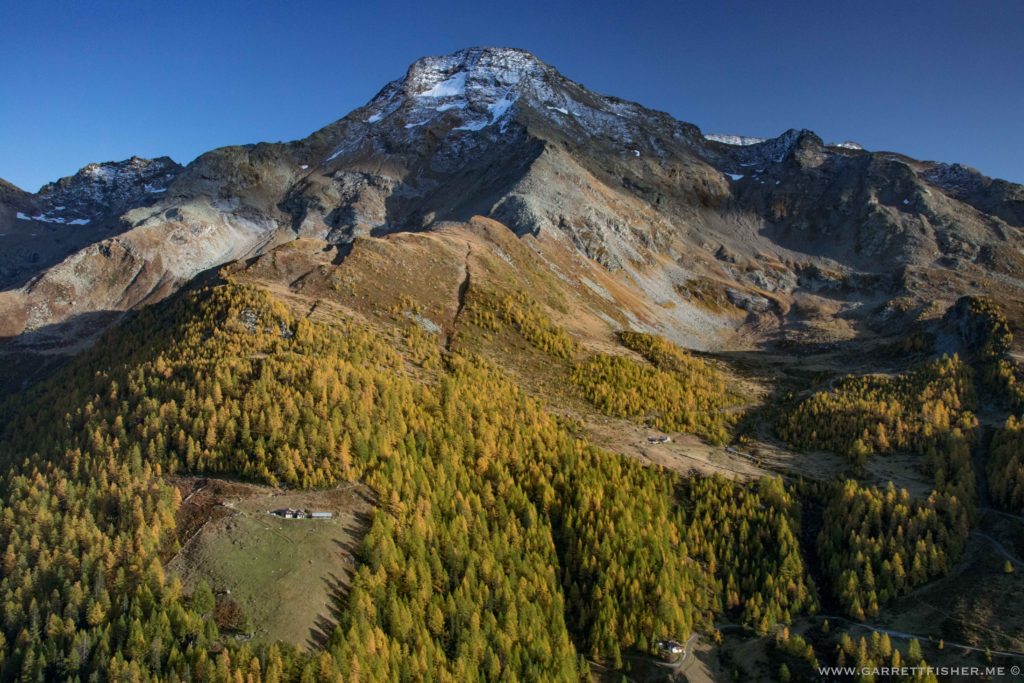 A friend saw a photo like this as noted it looked like “Little Colorado.” If one swaps the larches for aspens, this is a scene one might expect in the Elk Mountains of Colorado. 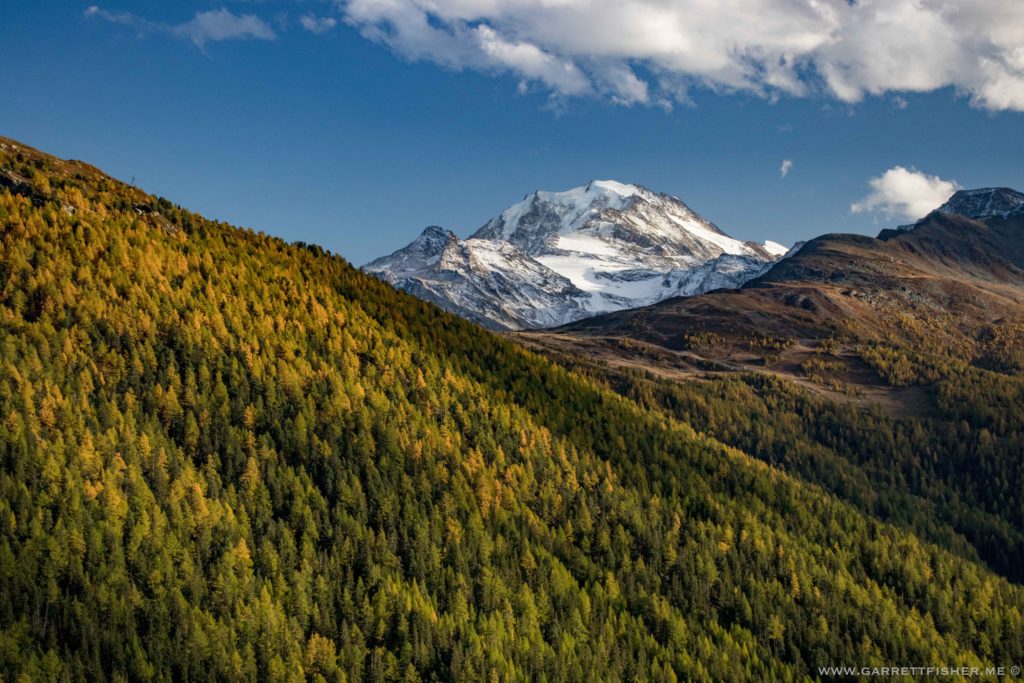 Interestingly, I have a fall photo of the western side of the Black Mountains of North Carolina, the tallest ridge in the eastern half of the United States, that looks a lot like this, albeit somewhat less severe. Colors and tones were similar. That was five years ago. 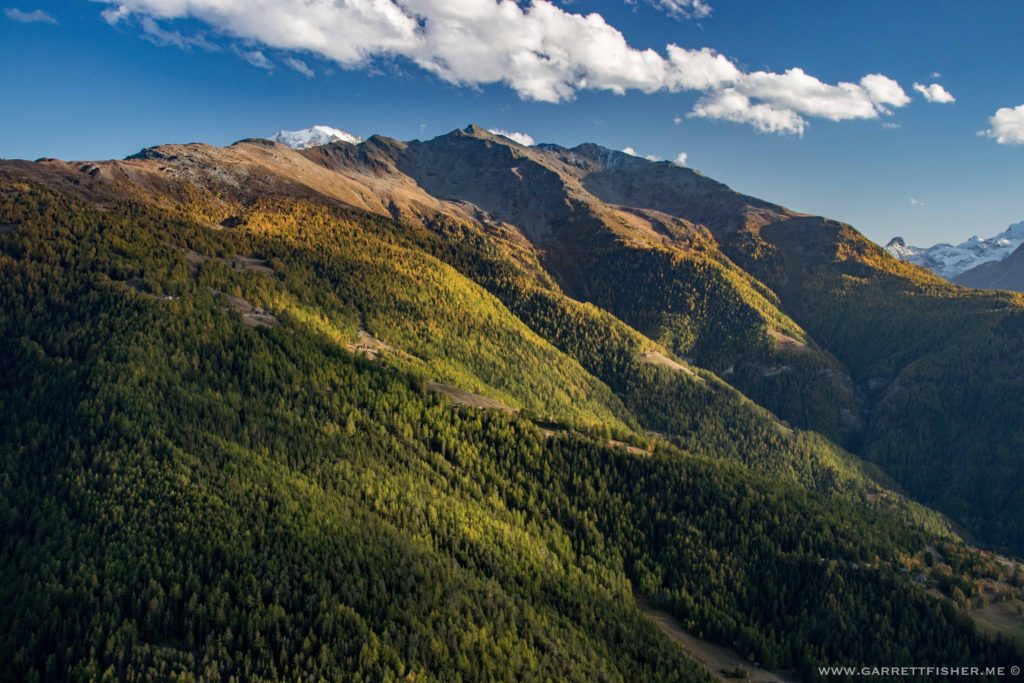 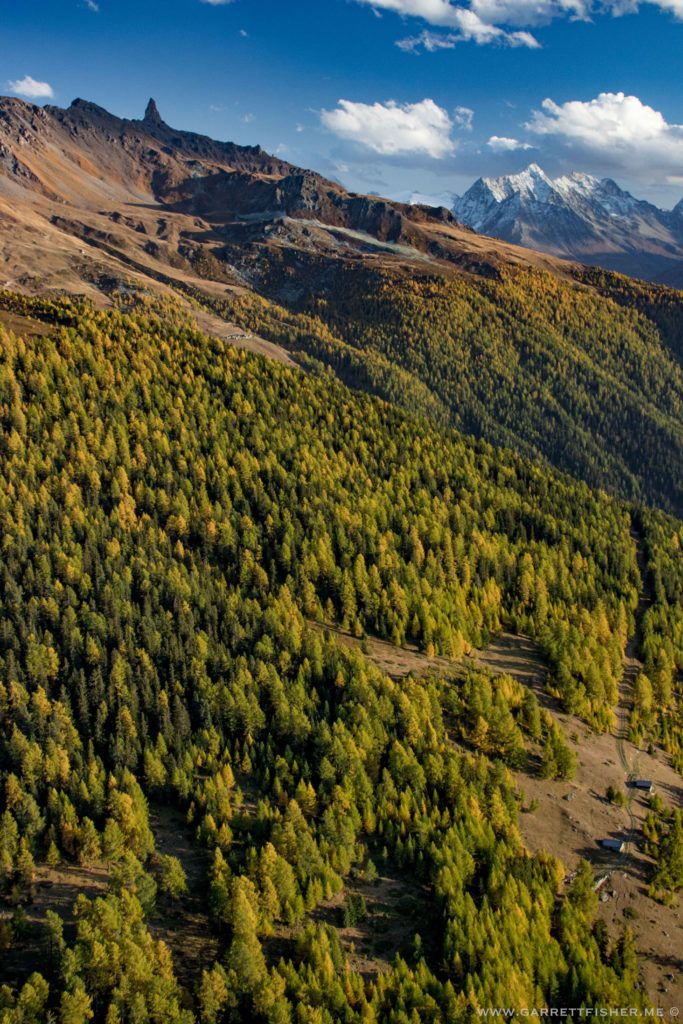 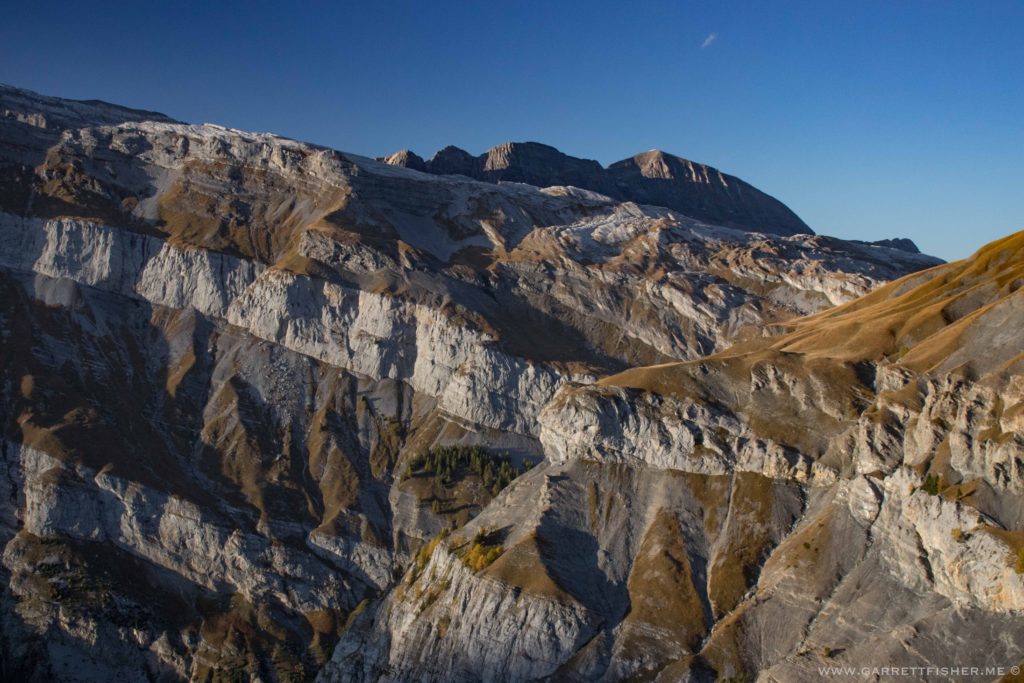 Now on the other side. I took some photos of this terrain a year ago. How things change yet how they stay the same. 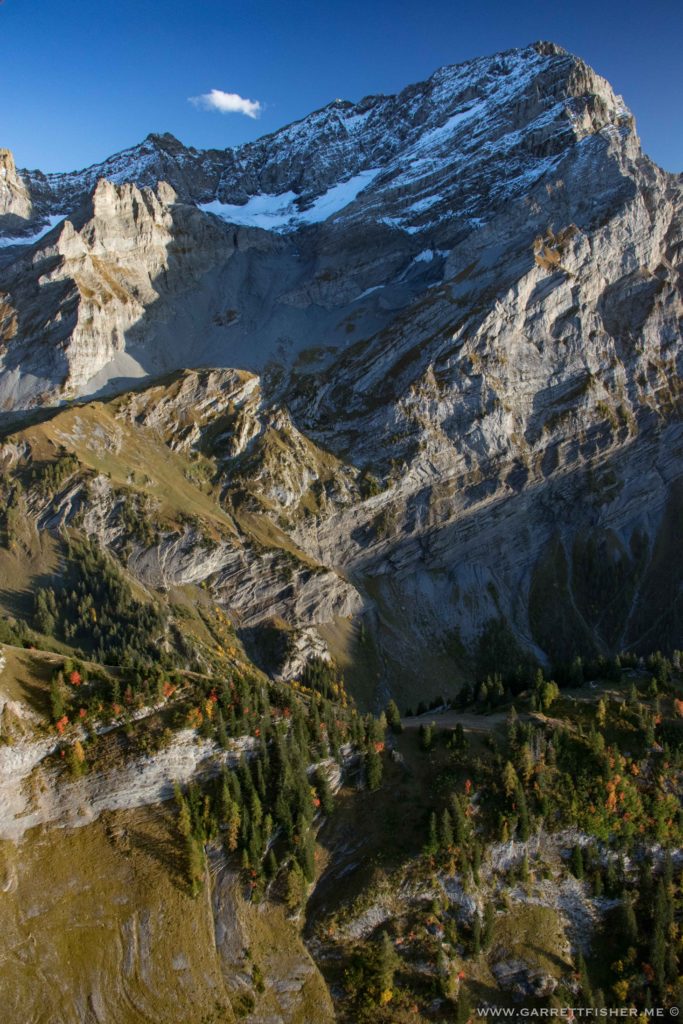