When I first concocted this wonderful idea to spend the winter at the Outer Banks, a purely southern friend of mine was in disbelief: “Winter in the Outer Banks? That’s cold!” As usual, I was convinced that I was correct, and that he was wrong. Six snowfalls later, and I must admit, it was insanely cold this year, and this is coming from someone who spent a year at 10,000’ elevation in Colorado.

The houses here are not built for such cold air. Gaps in windows and doors expand during the cold, so the houses become extremely drafty. Further, heating comes from heat pumps, which is basically A/C in reverse. When it is 10 degrees outside, there isn’t much heat to grab from the outside and bring inside.

The beach becomes a torn up mess. Remember, the road is the beach for 8 miles. During Nor’easters, sometimes there is no beach. Other times, it is a war zone, with boards, piles of sand, ledges, walls, and all sorts of hazards. Chunks of ice made it even more uncanny. There were opportunities to drive in both blowing snow and blowing sand!

The concept that the snow melts the next day in the South was not true this year. We had a snowpack for a solid week from one storm, with ice everywhere and no place to walk without falling on one’s rear end. Forget snow shovels, road salt, plows, or sidewalks; none of these things exist. The snowmelt accumulates in giant ponds all over the road, and then freezes.

While it was challenging for the month of February, it was beautiful in some respects. The horses went on like normal, ignoring the snow and hiding out when it was insanely cold, and it was fun to watch them during some of the snow storms. Saltwater froze onto the horse fences (salt water freezes at 28 F), and the mostly fresh Currituck Sound did some interesting things at the shoreline. Much like my youth in upstate NY, the winter is a real pain; however, it has hidden beauty just about everywhere.

If you’re wondering where the flying images are, the cold air was quite hazy, so there was little to fly around and take pictures of. March will be quite active, so there will be plenty to look at. 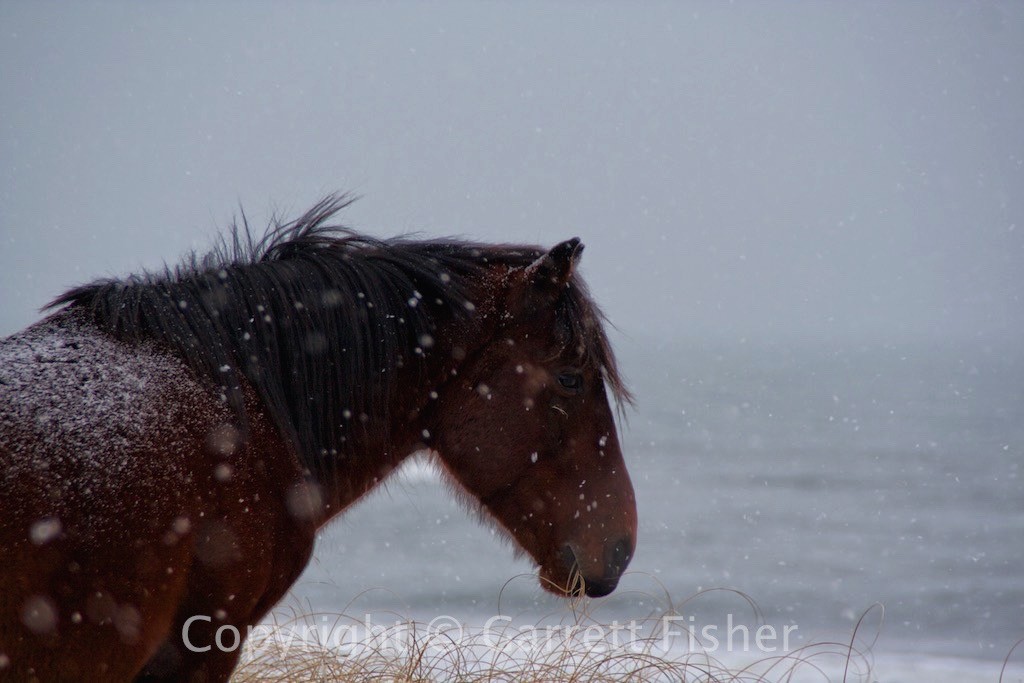 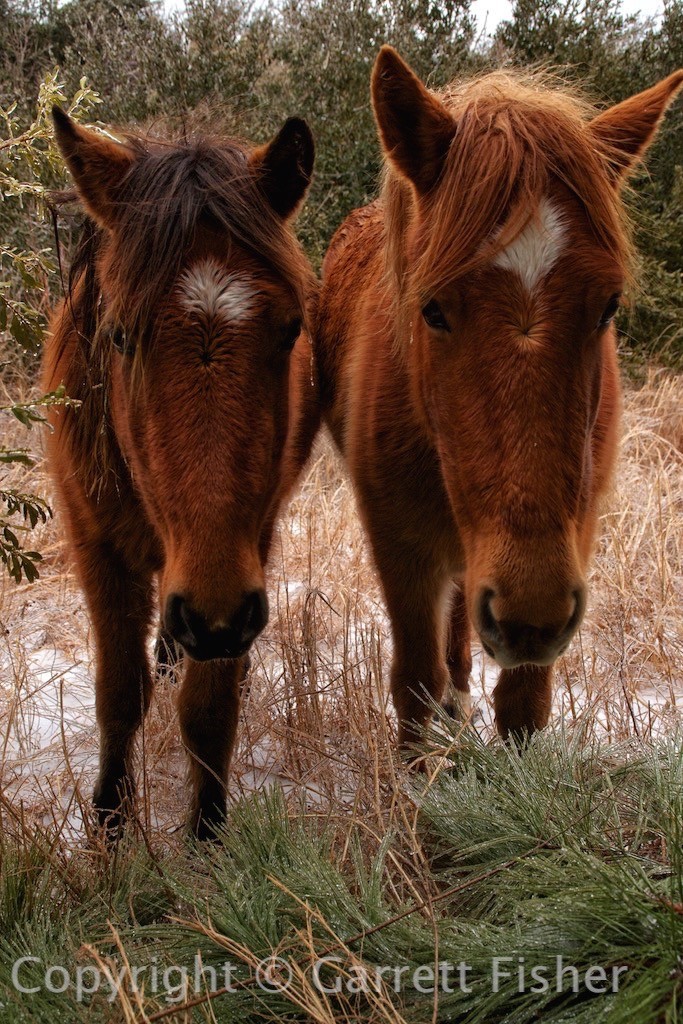 Horses after ice storm, wishing I would provide them food. 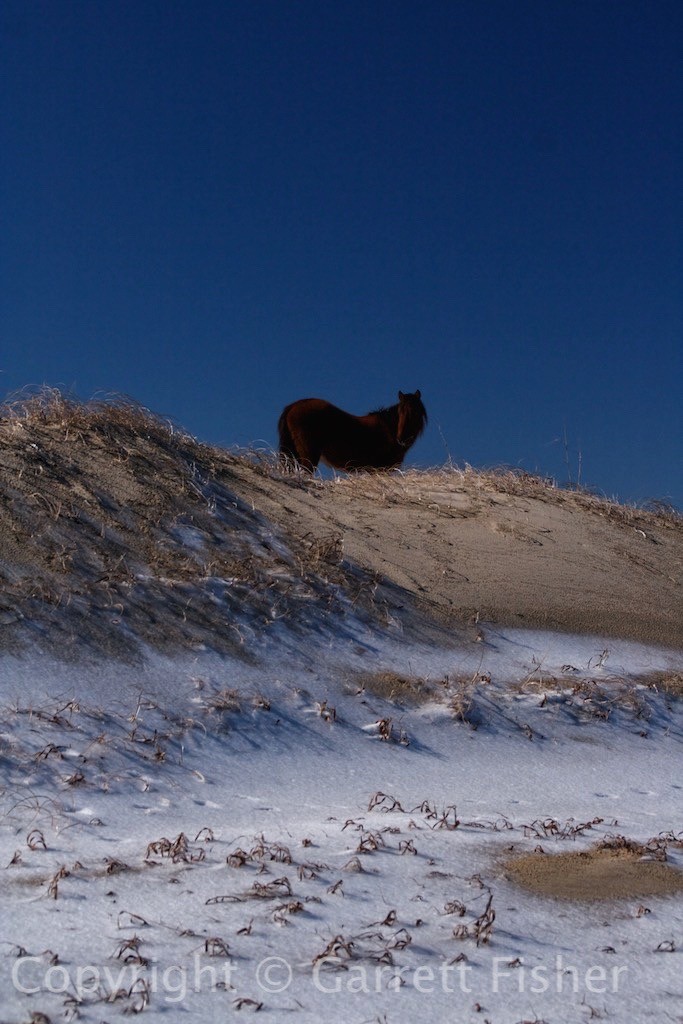 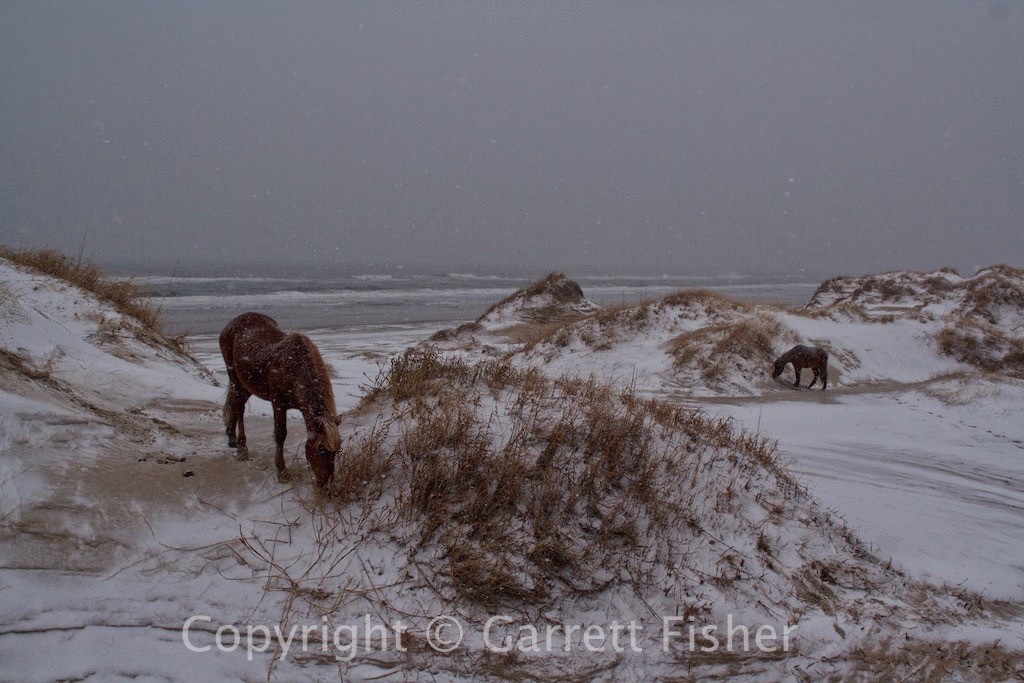 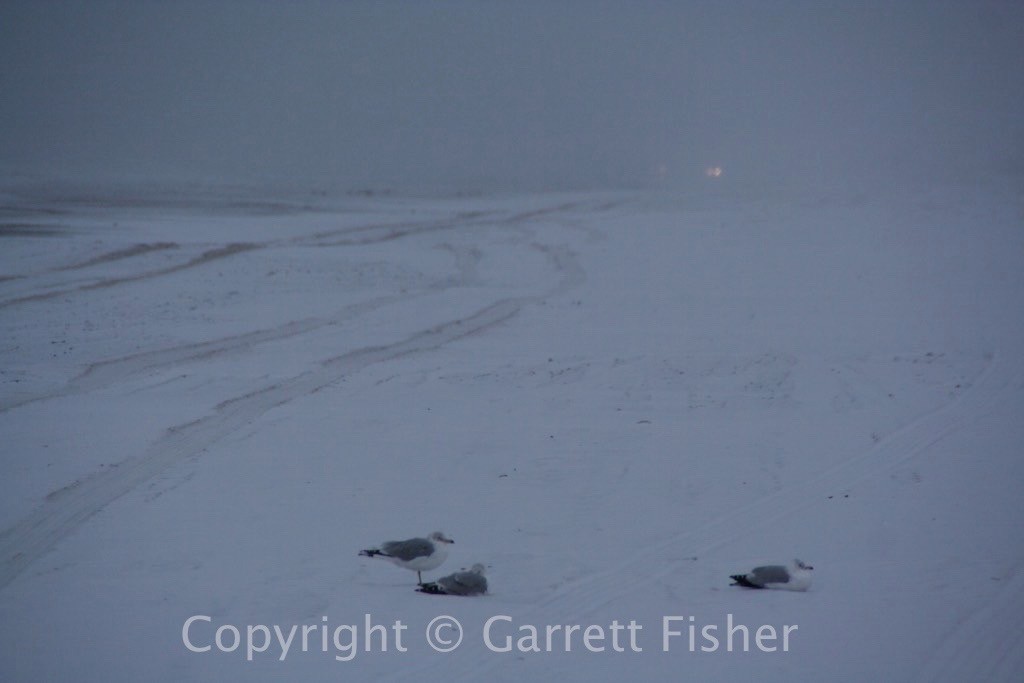 Seagulls sitting on the beach, before snowstorm. 18 degrees out. 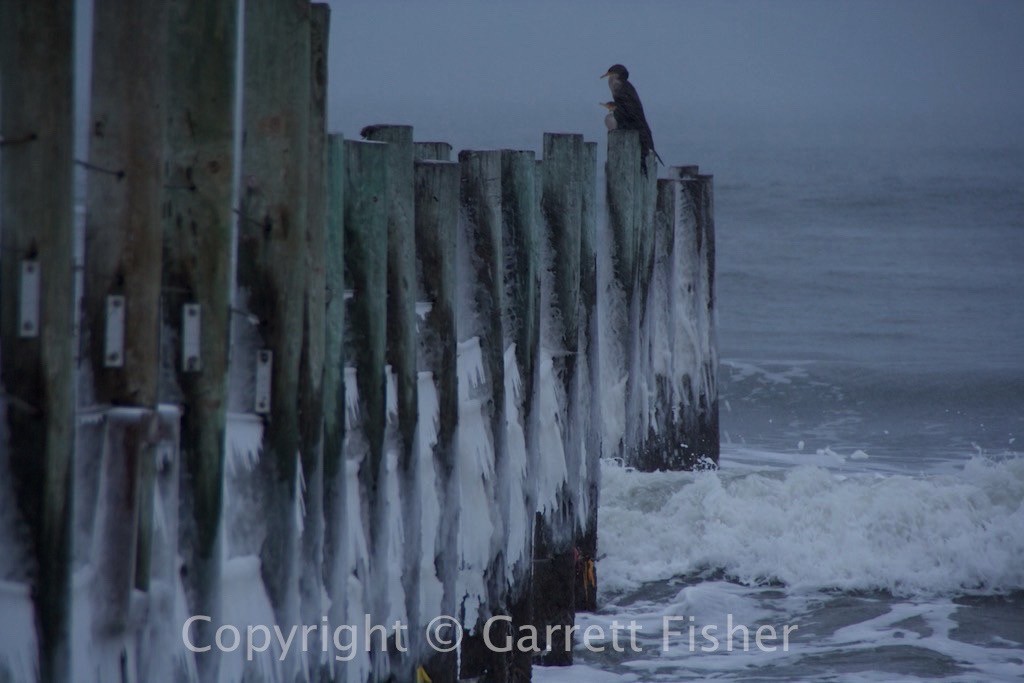 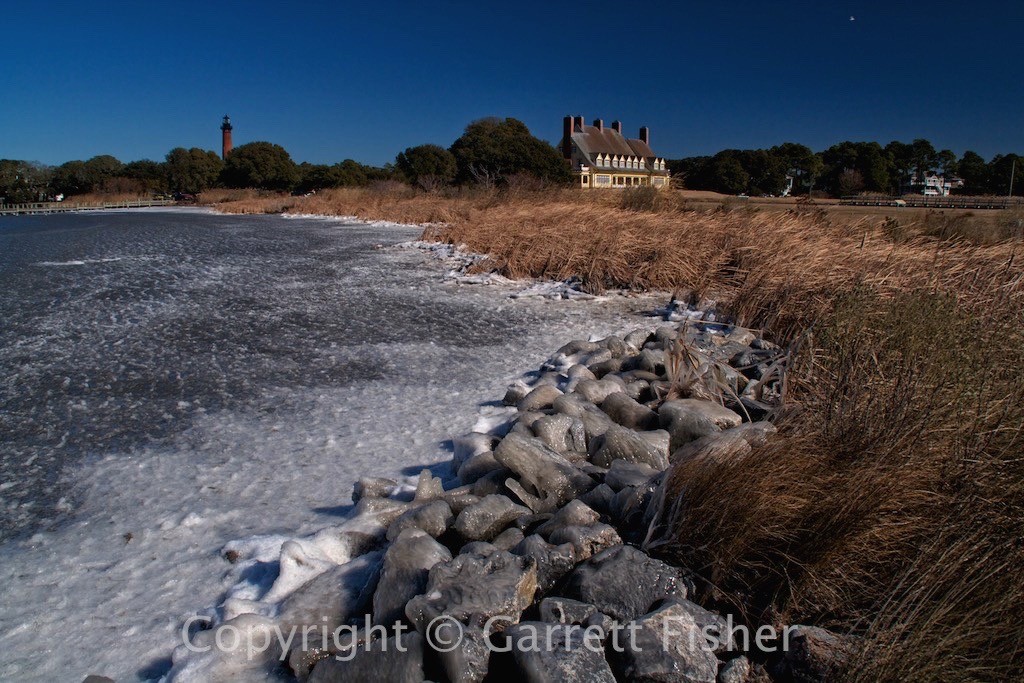 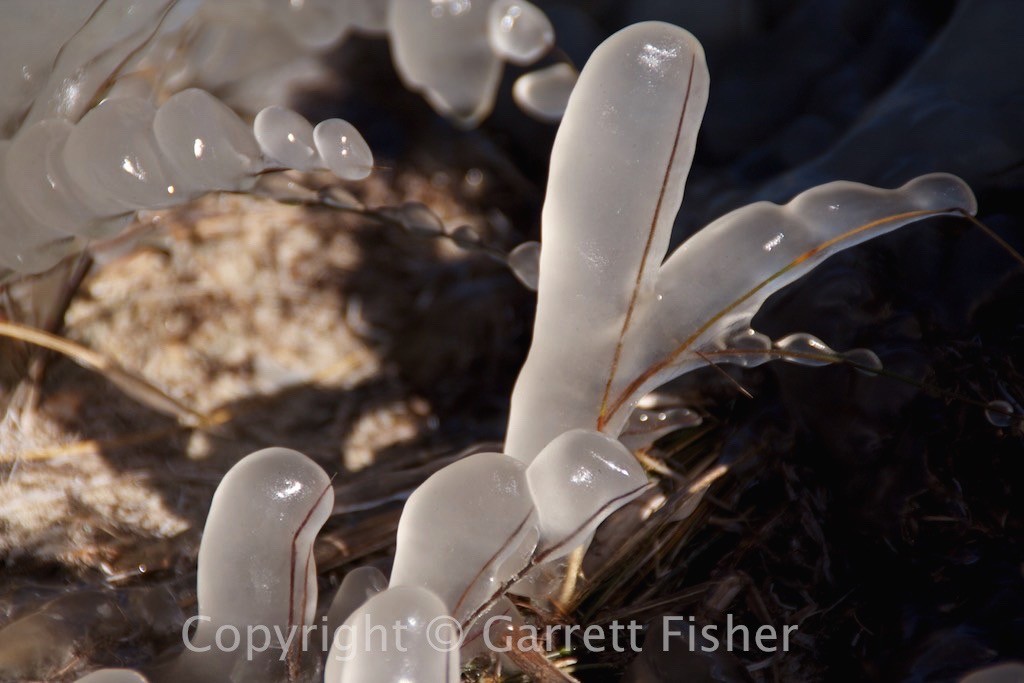 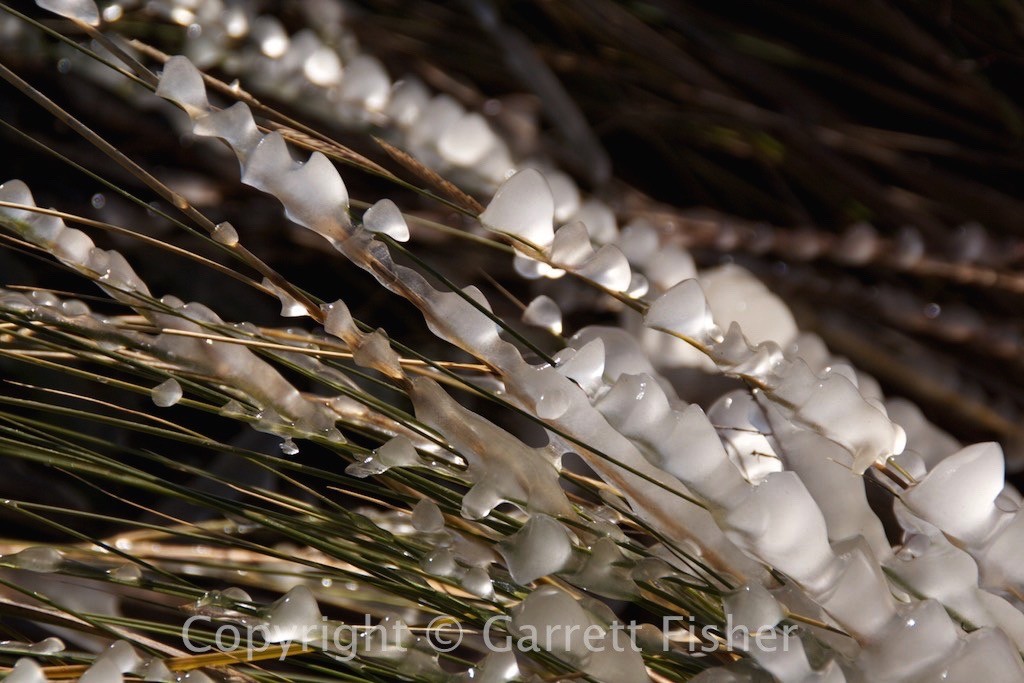 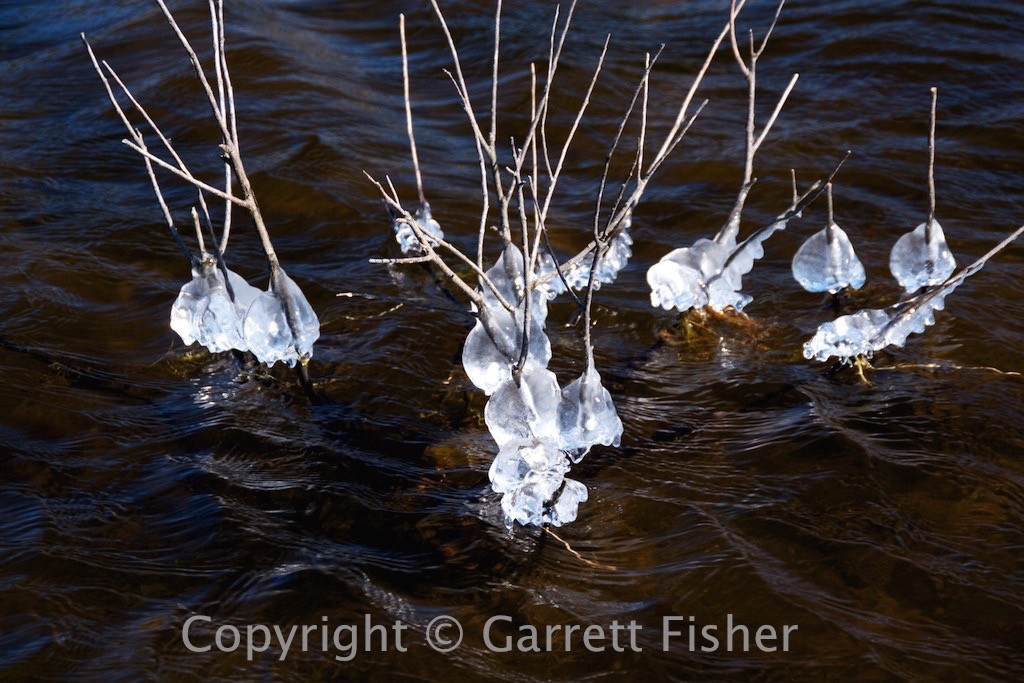 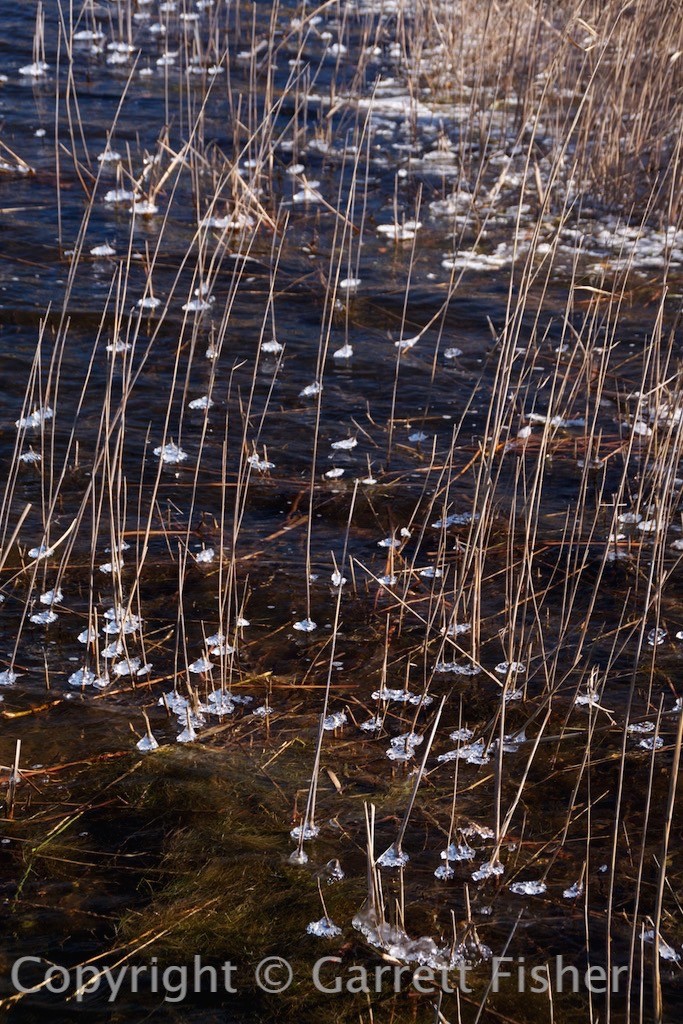 Ice features on Currituck Sound shore and in ponds at Whalehead Club. 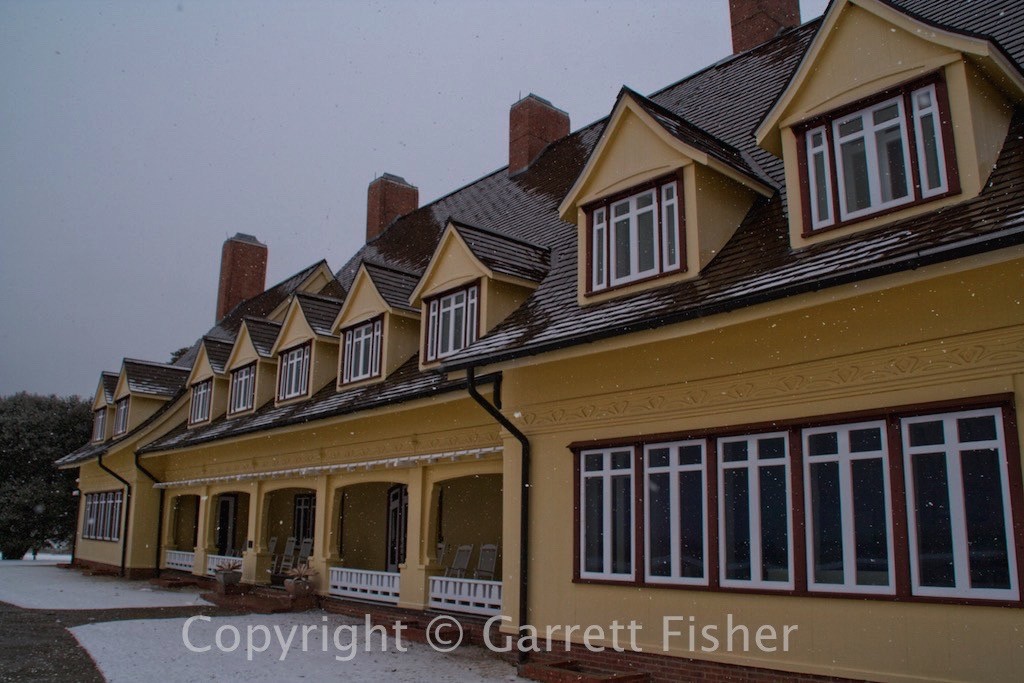 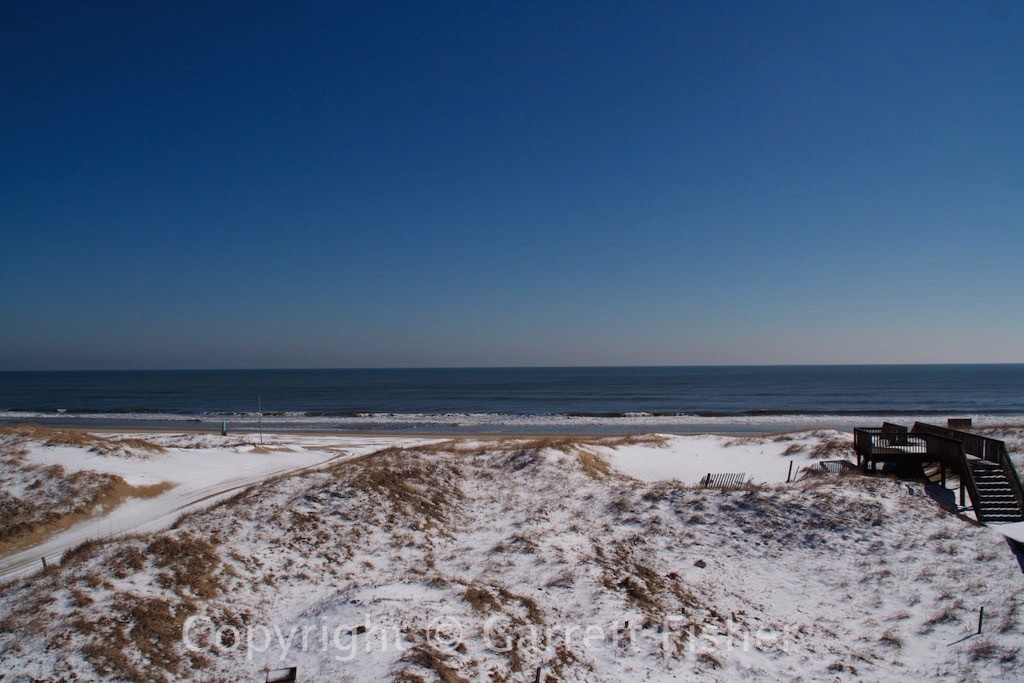 View from the house. That is not white sand.

My near-death experience last fall near the Blue Ridge Parkway has finally been published in AOPA Pilot magazine, allowing me to share the lovely story. I’ll let it speak for itself.

The flight was planned to be a photography exercise, documenting the terrain of the New River Basin in Virginia and West Virginia. The forecast called for sunshine, light westerly winds in North Carolina, with a breezy day in the Virginias.

I set off from Lincoln County Regional Airport, outside of Charlotte, North Carolina, in my Piper PA–11 with a Continental O-200 engine. It is a simple aircraft with no electrical system. The route of flight was straight over the Brushy Mountains and north into the Blue Ridge Plateau in Virginia. The ascent itself into Virginia was uneventful, except the wind was absolutely howling with moderate turbulence in the higher terrain.

After 20 minutes of flight in these conditions, it became clear that there was no way I could pull off any successful photography. I turned around at Hillsville, Virginia, returning along a similar flight path.

The turbulence was continuous and annoying to manage while still in Virginia. My ascent up the Blue Ridge Plateau had been uneventful, so I planned a similar descent. I decided I would get a little closer to the terrain right at the ridgeline—as there were no buildings, vehicles, or people—and I could glide off the ridge into the Piedmont if the engine quit. I was paying close attention as I descended toward the ridgeline to the activity of the trees responding to the wind, and it appeared to be a lee-side area with much quieter conditions.

Upon getting 250 feet past the ridgeline, I encountered a mix of severe turbulence and wind shear unlike anything I thought was possible with flyable wind speeds. The aircraft was almost instantly rolled 110 degrees to the left, partially upside down, while about 300 feet above the ground.

I instantly applied full right aileron and heavy right rudder. The roll rate in a Cub is unimpressive, and my return to proper orientation to the sky was aided by getting rolled harshly 70 degrees to the right, along with vertical turbulence. I hit my head multiple times on the frame above the seat, and gear was flying around the cockpit with a vengeance.

During the violence, I was fighting the airplane like it was a misbehaving fighter jet, using all of the agility I had to control my upper body and keep my vision pointed out the windshield. There was only one quick glance possible at the airspeed indicator, which read 60 miles per hour with cruise power in a descent. A brief lull afforded the opportunity to pull the waist belt extremely tight and lower the airplane to maneuvering speed before the next round of vertical turbulence—yet again I managed to bang my head on the ceiling. The accessories in the baggage area that were not secured were getting thrown around, and I used the next calm window to reset the ELT, just in case.

At this point, I thought I was getting away from the turbulence, as I was no longer close to the escarpment. I noted that, in the melee with the wind, I had lost 1,000 feet of altitude, despite being trimmed for cruise. I tightened the waist belt as hard as I could, just in case, even though I thought it was over. One final bang still managed to knock my headset off, and I responded by tightening the shoulder belts as hard as they would go. After a consistent and mild downdraft away from terrain, the wind calmed to 10 knots with sunny skies. My flirt with death quickly became an insultingly idyllic afternoon.

With a 60-minute flight ahead of me, I had plenty of time to think what on earth went wrong with this little charade at the state line. I am familiar with rotors, mountain waves, and downdrafts, and I have never been in a situation this vulnerable. Here, for the second time in my flying career, I was caught in a vulnerable situation—not in epic spires of rock at 14,000 feet, nor the highest peaks over 6,000 feet in North Carolina, but rather at 3,000 feet in the Southeast.

The weather phenomenon was not something I expected; it was turbulence and wind shear. My best presumption is one current of air was moving fast over the plateau, and another was stationary in the air mass below over the Piedmont. Two differing airspeeds were most pronounced by the ridgeline, which created a strong shearing force. The reason the windward side did not feature this kind of danger was because of a longer fetch where the two air masses could mix.

I am thankful for three factors that I could control, and which worked in my favor. The first was the fact that I had the bulk of the gear in the aircraft strapped down. Second, I did not follow untrained instinct, which is to pull “up” when rolled over, thanks in part to having read a fine article in AOPA Pilot magazine about it in the not too distant past. Being so close to terrain behind me would have been a quick death. The last thing is my personal belief that panic and out-of-control fear has no place in an airplane. While I do not like being turned over, nor do I like getting literally beaten up by the wind, I was still many hundreds of feet from the nearest object. The matter of focus at that moment was not the emotional magnitude of “what if” something worse happens, it was what needed to be done to get out of the situation. An airplane needs to be commanded, and not the other way around.

The most important lesson of the event is to take a cautious approach when getting close to terrain, evaluated daily based on the weather. That’s my standard rule, and I ignored it. The second lesson is that terrain is terrain, regardless of how unimpressive the elevations are related to sea level. By thinking I was safe down at 3,000 feet mean sea level, I missed obvious clues and found myself upside down.

Garrett Fisher is an author and blogger. He recently published Above the Summit: An Antique Airplane Conquers Colorado’s Fourteeners.

Sometimes, a flight is just a plain old waste of time. Though I spend incredible amounts of time analyzing weather, winds, atmospheric haze, and lighting, sometimes it’s just a bust. The forecast called for 6% sky cover, with 25% humidity. Instead, after I took off, the clouds came in within 20 minutes, and covered the sky 100% overcast, with haze and dampness. Lesson learned: do not trust the weather around here, and check the satellite just before the long drive to the airport.

While I did not get photos that will make it into my OBX book, I did get a few that show the Pamlico Sound from the mainland side, along US 264 en route to Swanquarter, NC. I ended up flying to Stumpy Point and back to the airport, aborting the trip before it got worse.

Stay tuned for when I try again, and remember that a very long flight west will be coming in two months or less. 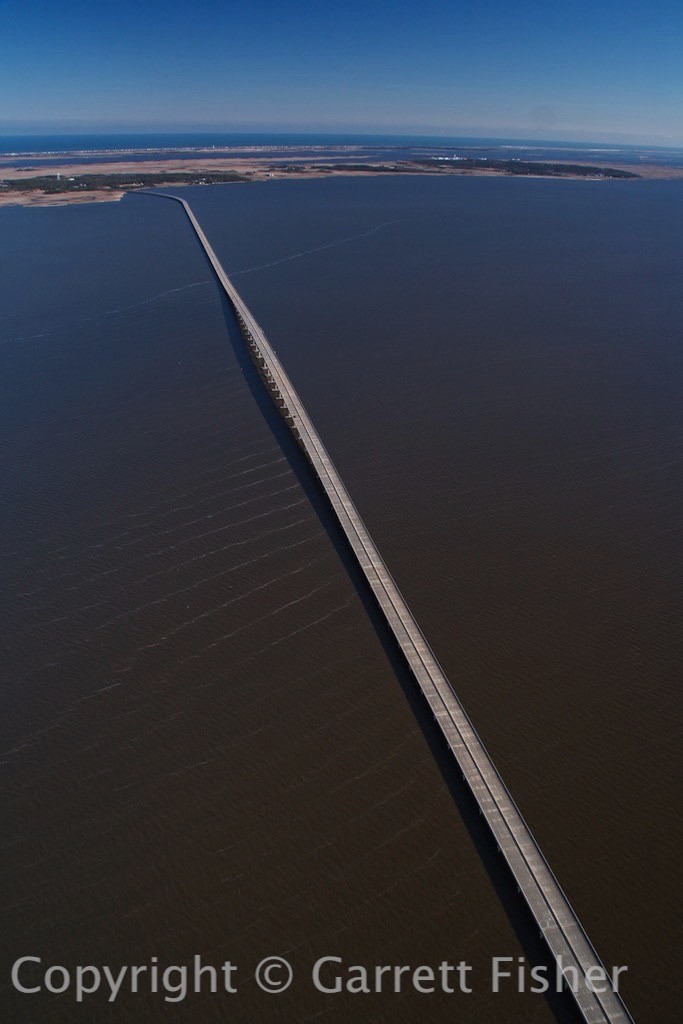 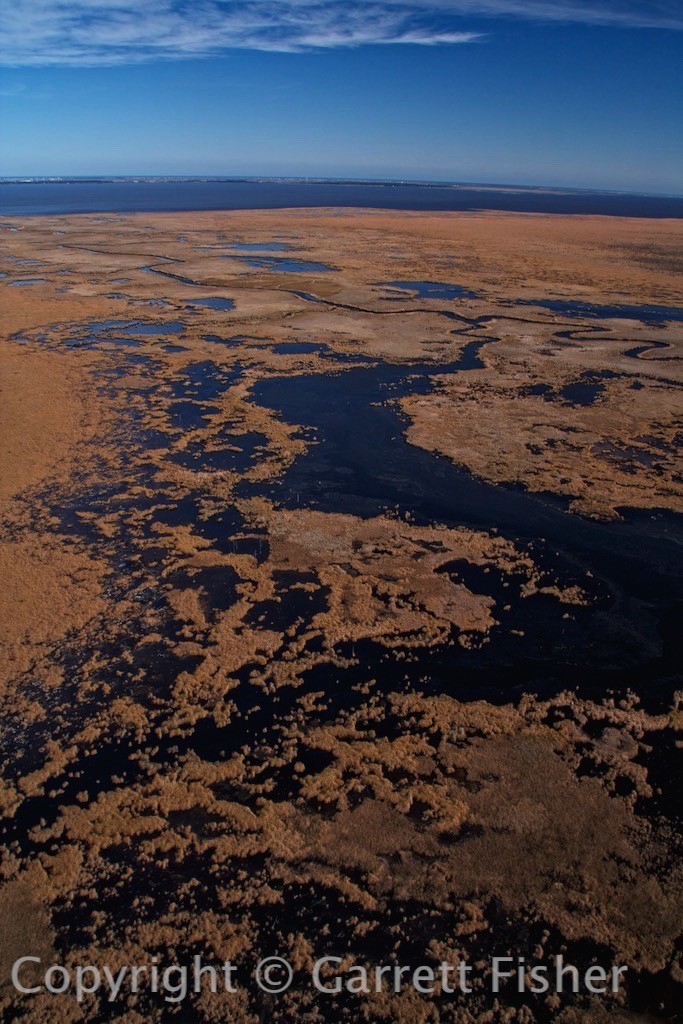 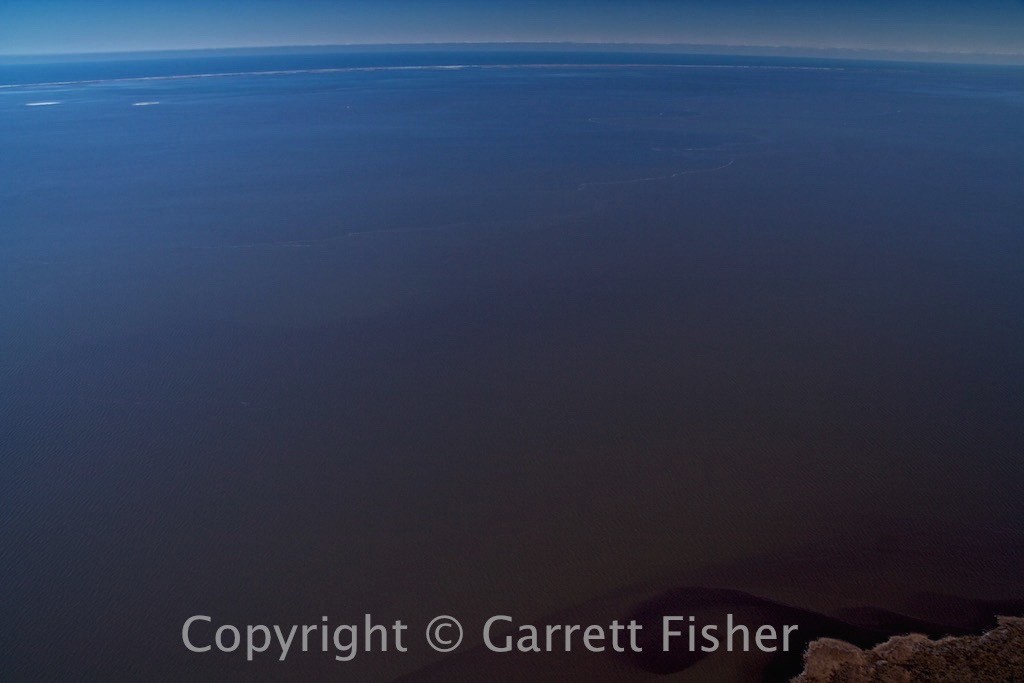 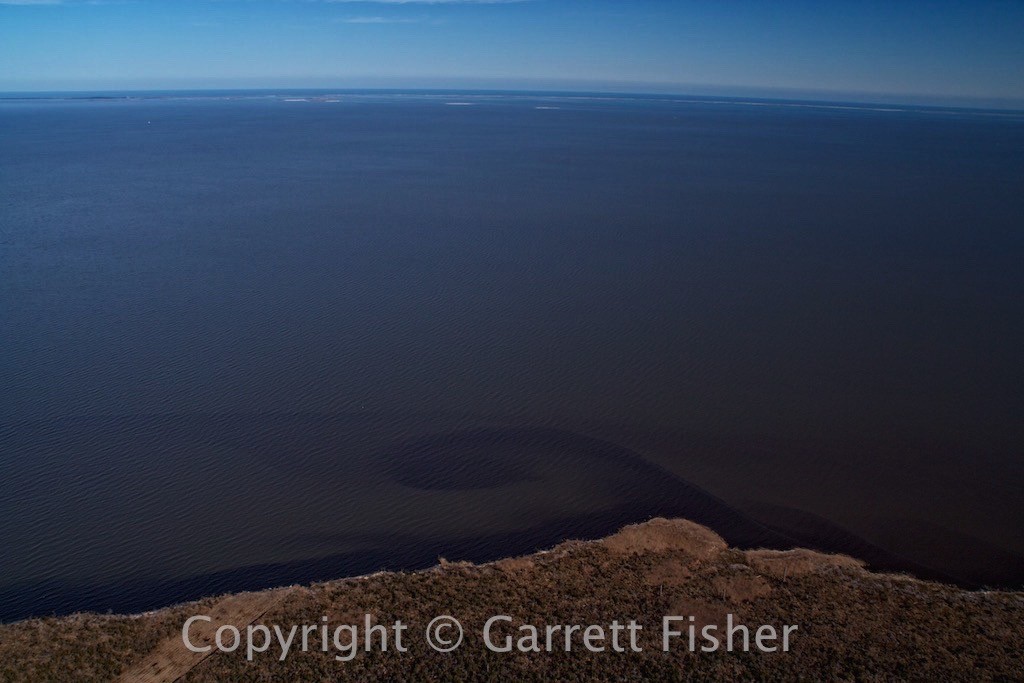