Sometime in the last month or so, a rather eerie sandstorm from the western Sahara blew into the Alps, turning the sky a grayish brown haze. I wanted to get a chance to see more of it, so I investigated web cams, only to find a salacious apocalyptic Martian orange on the other side of the Bernese Alps. It was unfortunate that winds were gusting to 50 knots at all observation stations on the ridge, including that of Evionnaz, down in the valley below, so I couldn’t get over there to see the orange as I would have hoped. I suppose it was consistent with adequate wind energy to transport sand from another continent.

I ended up flying that day, staying on the north side of the Alps, wandering around in what became a sand-filled fog of delightfully orange disorientation, hugging Class G airspace to remain legal in light of atmospheric conditions. Needless to say, it was a lesson in why pilots tend not to fly in sandstorms, as one cannot see very well. The airplane got a new air filter afterward and remained covered in so much dust that I washed it sometime later.

In the ensuing weeks, one would expect some classic midwinter alpine weather, which tends to consist either of snowfall or pleasant sunshine. That did not materialize. Sand lingered in the air for days, albeit toned down from the “book of Revelation” setting to merely “Arabia.” That gave way to cloudy and foul weather which, in turn, gave way to an early bout of unfortunately classic early spring weather in central Europe: a vile, opaque, filthy airmass from the German fatherland and Poland. I am not sure if it is humidity, coal exhaust, wood burning smoke, or what; the point is that it is gross and puts me in a foul mood just looking at it. When it is “supposed” to be sunny after a storm system, an ill-placed high-pressure zone ruins it all, sending air from behind the Iron Curtain to foul my expectations of visual purity.

It is intriguing that I have yet to speak to a local that notices the condition. It does not cumulatively last more than a few weeks per year, though for four out of five years in either Germany or Switzerland, whether living or visiting, I have run into smog that would make residents of Los Angeles proud, typically in early April. Anyway, that ruined flying for even more time.

Then the Sahara spewed more light dust, followed by another bout of foul light precipitation, resulting, finally, in a nice day. I could tell looking out the window that it was clear, so I set my mind to head to the Matterhorn. I hadn’t flown above it in some time, and I was in the mood to look down on the summit.

Checking the weather, all was swell for the flight, with no mention of deleterious particulates suspended in the air. It was due to be sunny, so I took off. As I was approaching the Bernese Alps on an illustrious sunny day, something seemed off. Grand Combin, a peak on the Italian border in excess of 14,000 feet, appeared to be cloaked in haze. “Perhaps it is the sun reflecting,” I thought, briefly. “No, something is up as it should be clearer.” Surpassing Plaine Morte Glacier, I discovered the problem: there was a thick layer of Saharan dust at 12,000 feet and higher, with a pronounced base. It was occluding all of the peaks I wanted to go to.

As the layer was incoming from the west, and since it was quite clear what it was doing there, whereas it was much lighter over the Matterhorn, I decided to avoid having to wash the plane again, right after having done it before, by heading west and ducking under the dust. Dismayed that my little scheme to go to the Matterhorn didn’t work, I did have the chance to see Mont Blanc ensconced in dust while I skulked around the glaciers below.

Grand Combin on the left horizon, hiding in the haze. 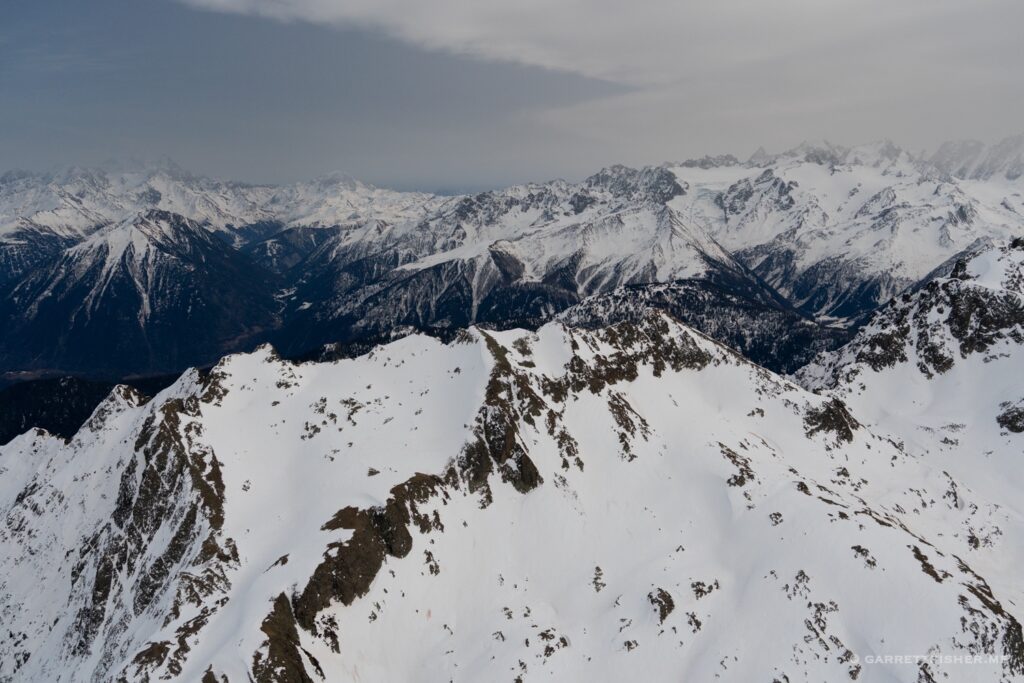 Mont Blanc, hiding in the dust to the right horizon. 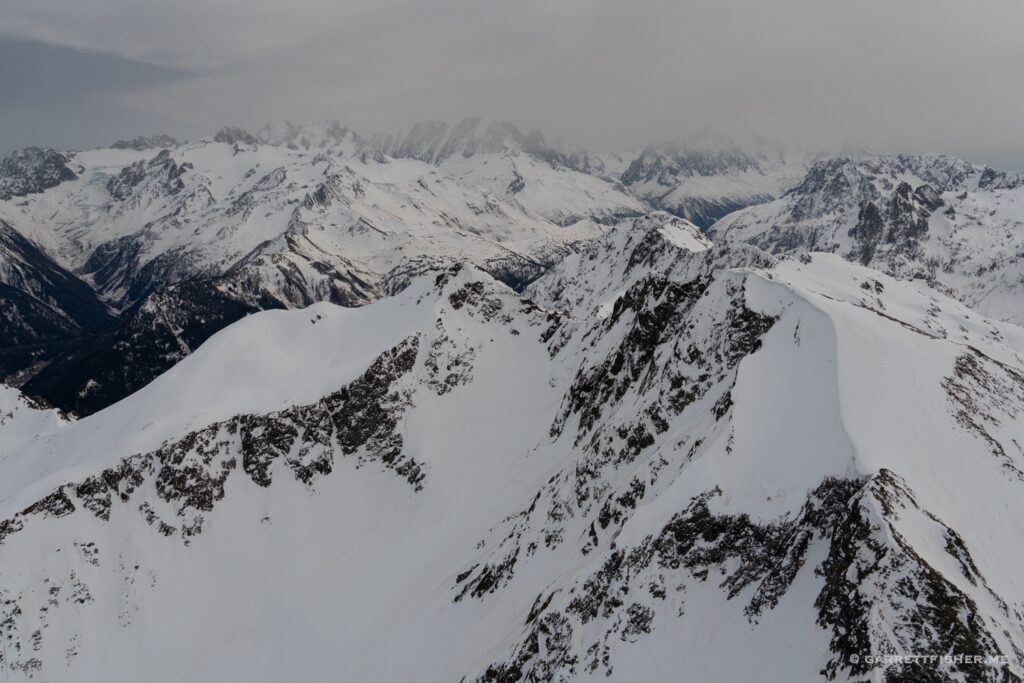 Kind of a delightful view, if you ask me. 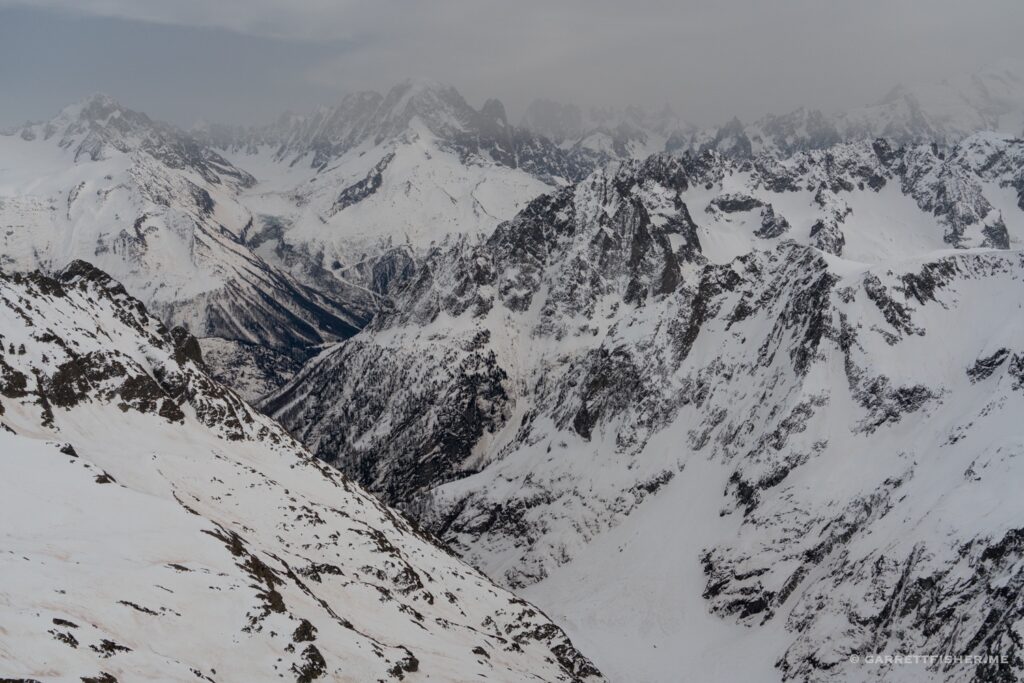 Looking up the north slope of Mont Blanc. A bit more visible from directly below it. 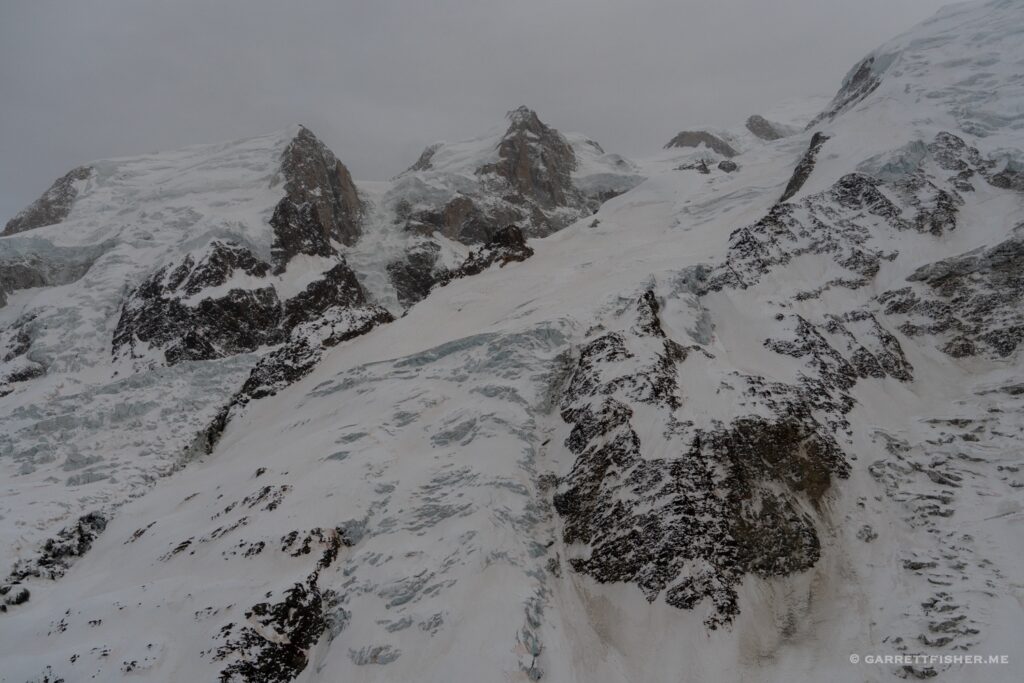 Toward the northwest, with a cloud layer moving in above the dust. 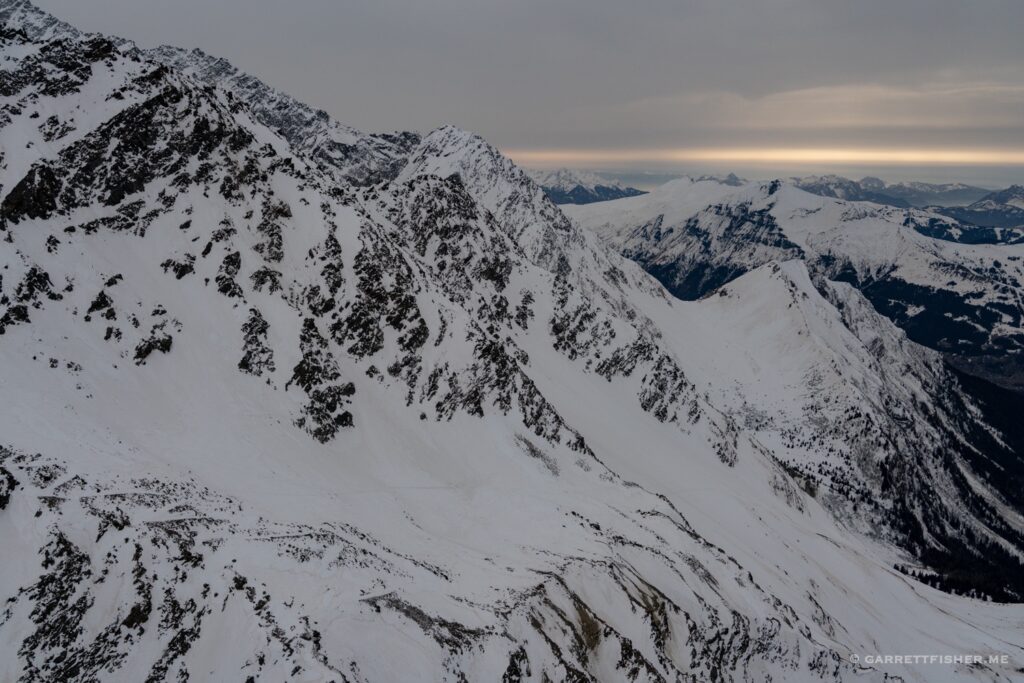 Tongue of a glacier to an avalanche path down into Chamonix. I normally don’t fly at this altitude; however, the dust forced the perspective. 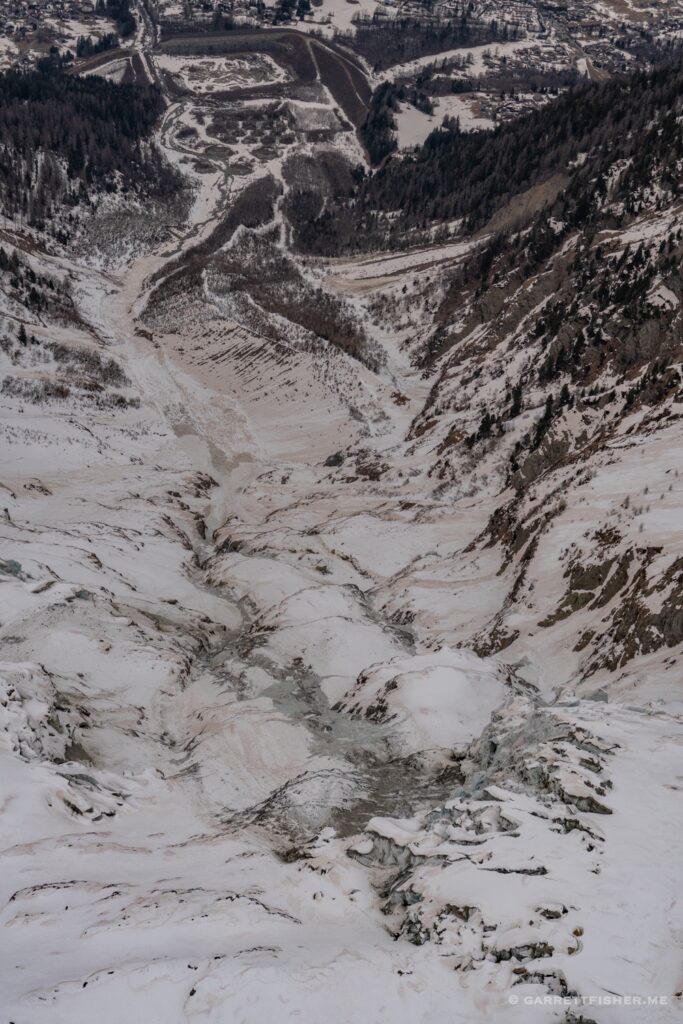 Chamonix in the valley, Glacier des Bossons at the bottom of the image. Since the atmosphere looked like Pennsylvania in February, I made it black and white. 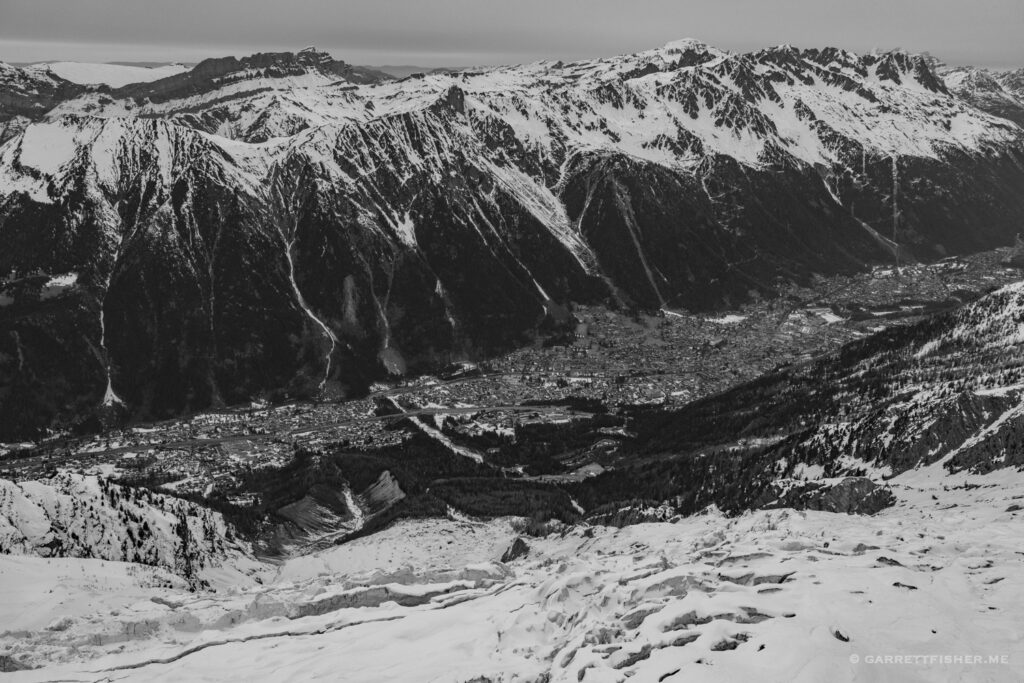 Mont Blanc summit, looking the other way, also black and white. It is virtually indistinguishable from the “color” version. Sand does wonders. 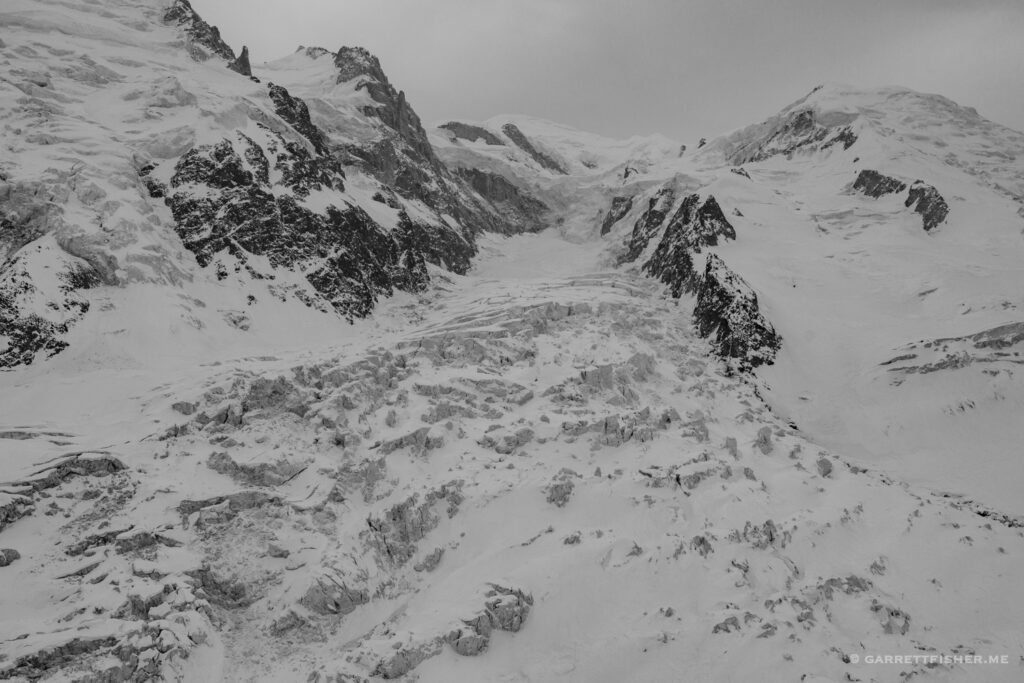 Mer de Glace, Grandes Jorasses, et Dent du Géant. Note the orange color in the foreground. That is from the prior sandstorm. One can see a bit of teal color, which is the glacier showing through winter snow (and dust). 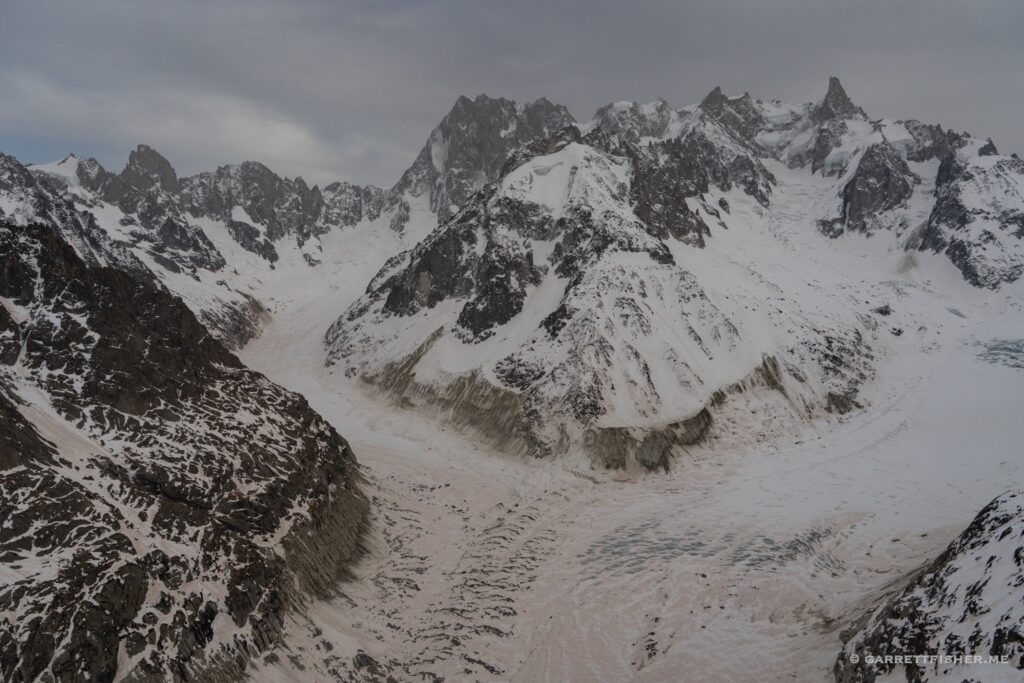 To the northwest, above Mer de Glace. 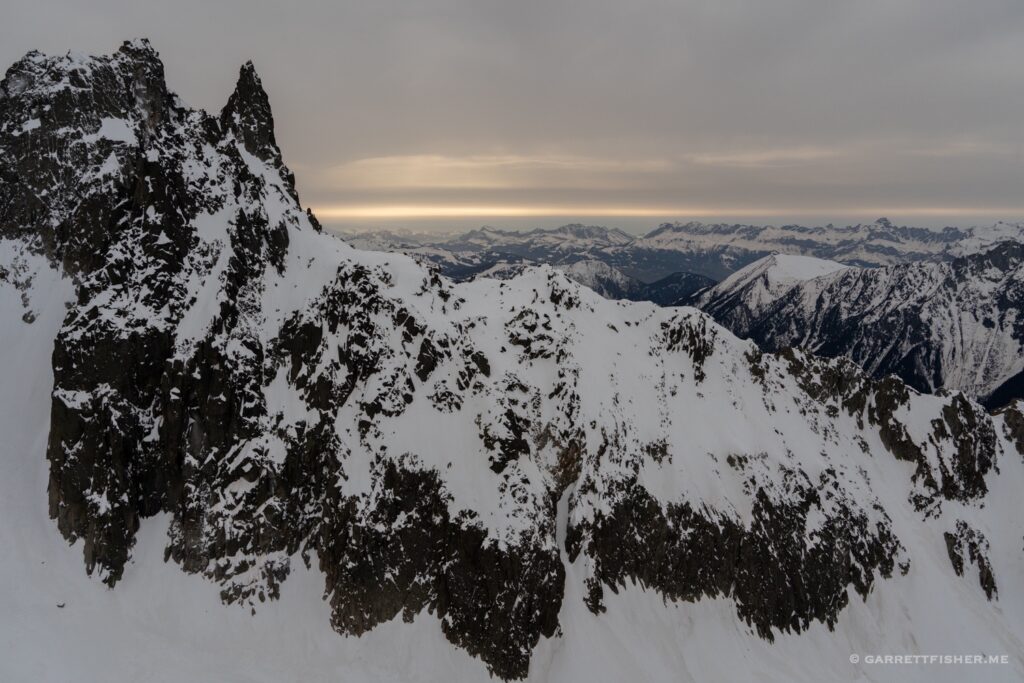 Glacier du Tour with some Saharan sand on it. 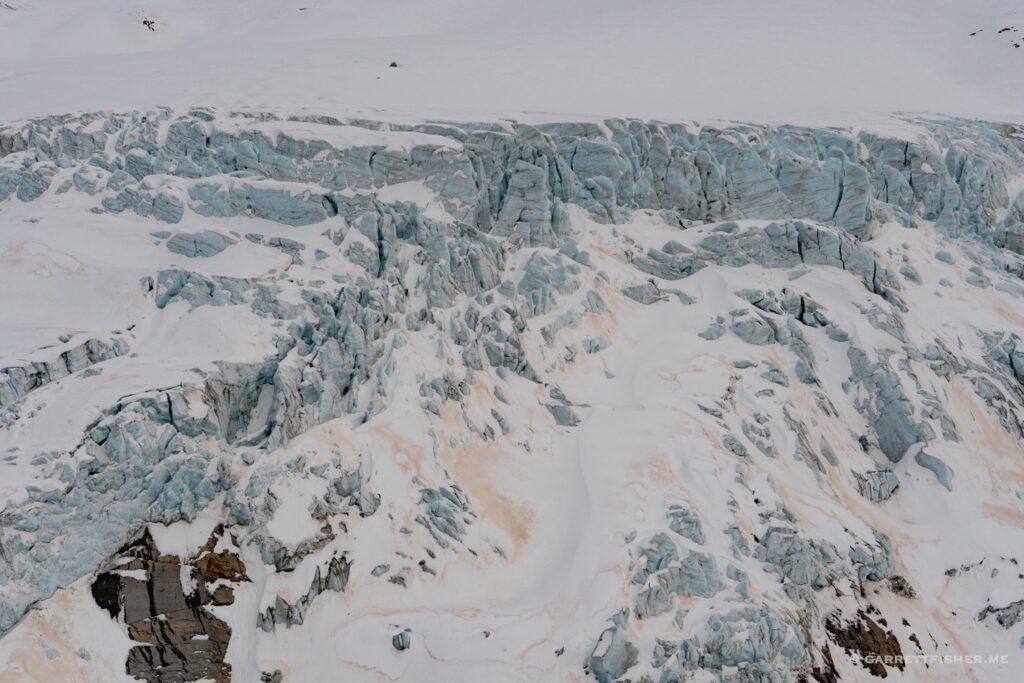 Mont Blanc in quiet respose, hiding in the sand, to the left. 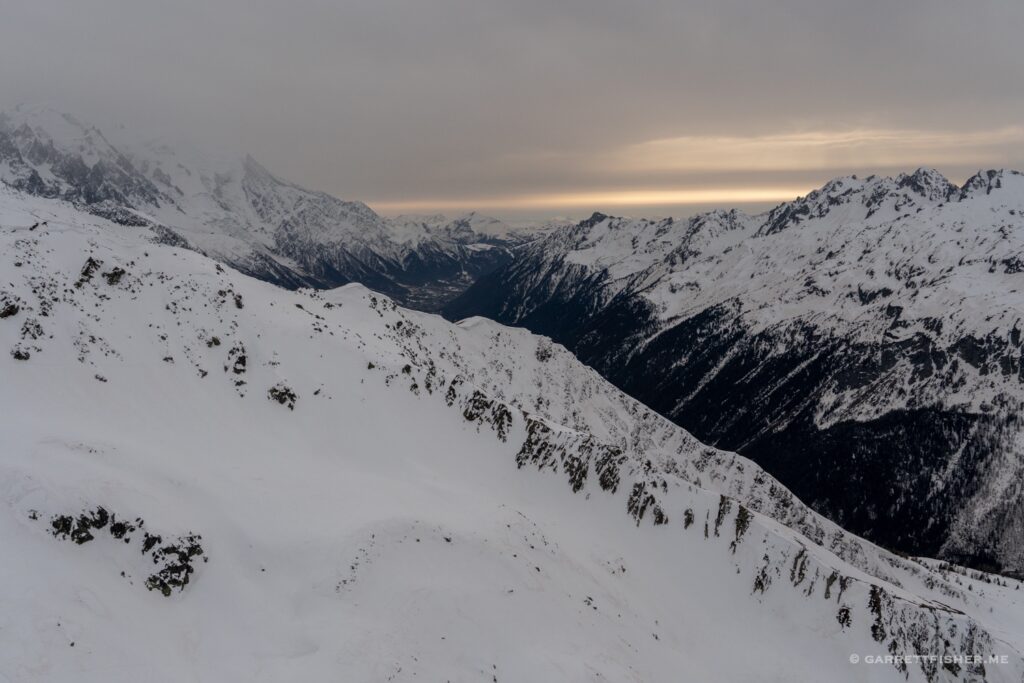