Once I figured out that I was approaching 2,000 hours of flight experience, I developed an internal itch to do something daring. For some reason, I had not flown to Mont Blanc in over 7 months, despite adding a more powerful [and heated] aircraft to the fleet. I think I got distracted by the ability to fly 30 minutes after sunset, thus enjoying nearby sunset tones in the Bernese Alps. Anyhow, Mont Blanc was on the brain, so I decided to make a go for the summit in the PA-11.

I can probably count on one hand the number of times I have actually summited Mont Blanc. It takes 90-105 minutes to get there, of which 60-75 minutes are spent circling the mountain to gain altitude. The higher the airplane gets, the slower it climbs, requiring flirting with whatever ascending air can be found. That is probably the reason I keep things to 14,500’ and below most of the time, as the view is substantially good enough, and the workload is less. I suppose there could be some reticence wandering around in an ancient [unheated] taildragger more than halfway to Everest, but I digress.

I had one failed attempt due to weather. I thought it would be a chance to surmount some menacing clouds, only to turn the clock over at 2,000 hours while having to avoid some snow at the French border. This flight followed on the next reasonable day, which was augmented by the glory of towering cumulus and cumulonimbus in the background. Usually, the bad weather is hanging out over Mont Blanc itself, so it was nice this time to have it serve as a backdrop. It did seem to be on the march toward the summit, so after getting my jollies, it was out of the flight levels and back to earth.

I am sure this is what Piper had in mind for the aircraft when they designed the PA-11.

Mont Blanc, from my common altitude. 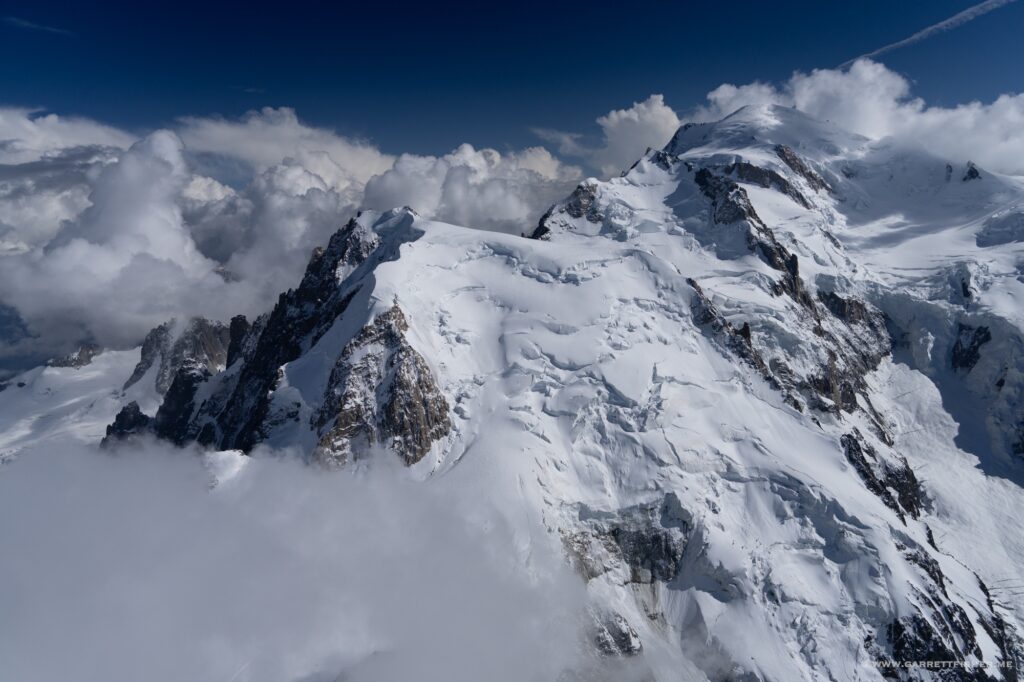 Italiano side of the mountain at roughly 14,000 feet. 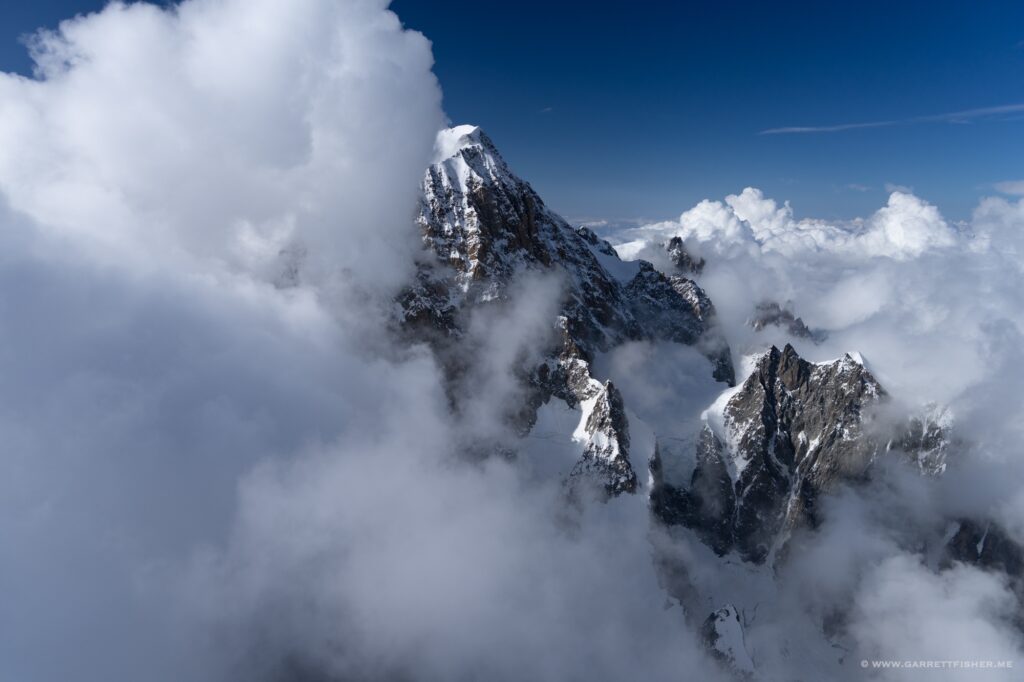 Southeast face beneath the summit. The risk here is sudden wind doing something unfavorable, given the angled slope on the north side and massive vertical drop on the lee. I found a bit of lift ironically, so I ran with it. 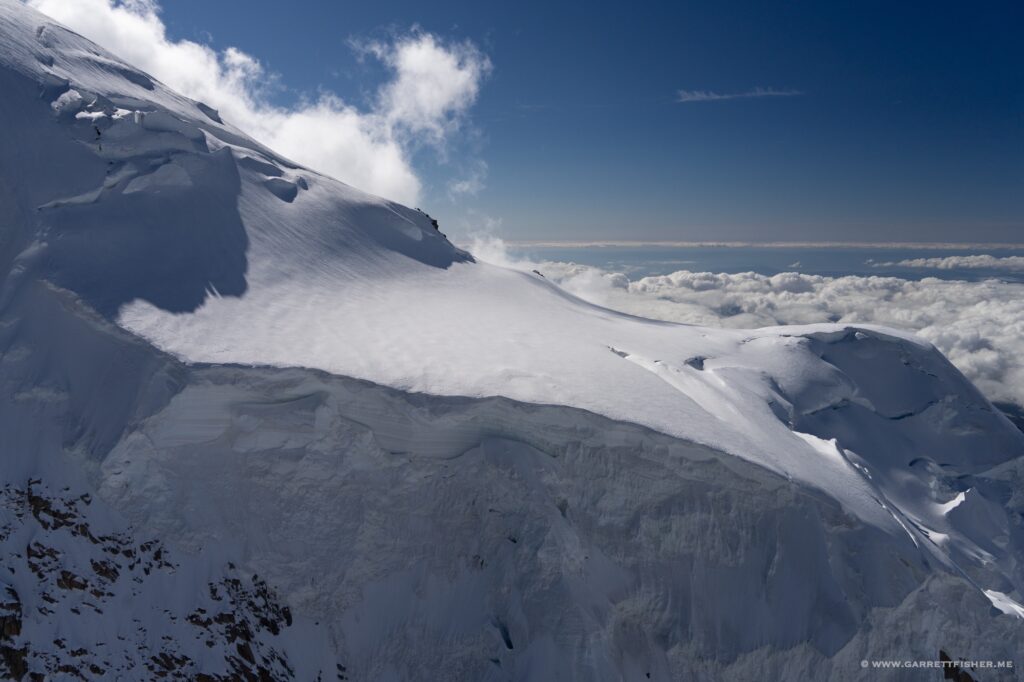 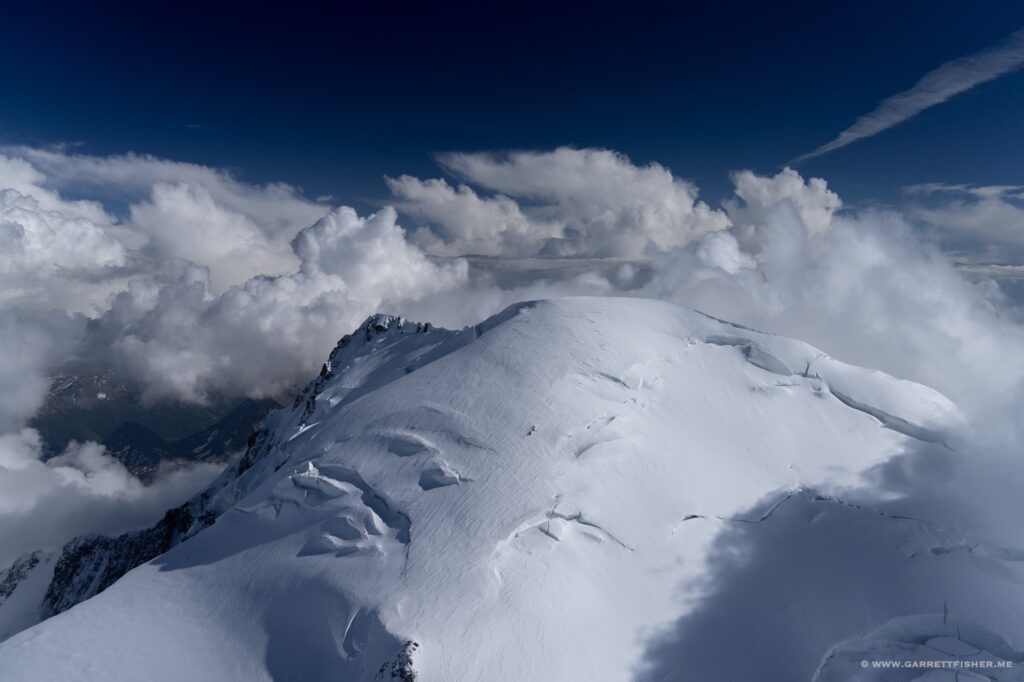 Now I am above it. 16,000 feet. Some lovely thunderstorms in the background accenting the image. Also note that the clouds on the west side of the summit have grown in just 5 minutes. 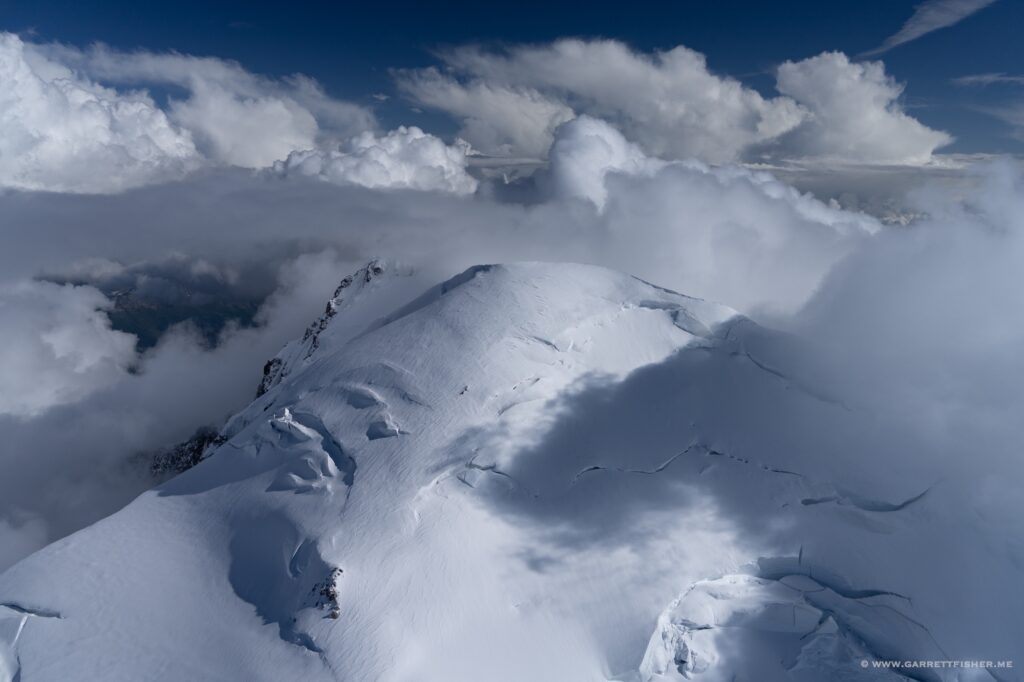 The summit clouded in as I was beginning my descent. 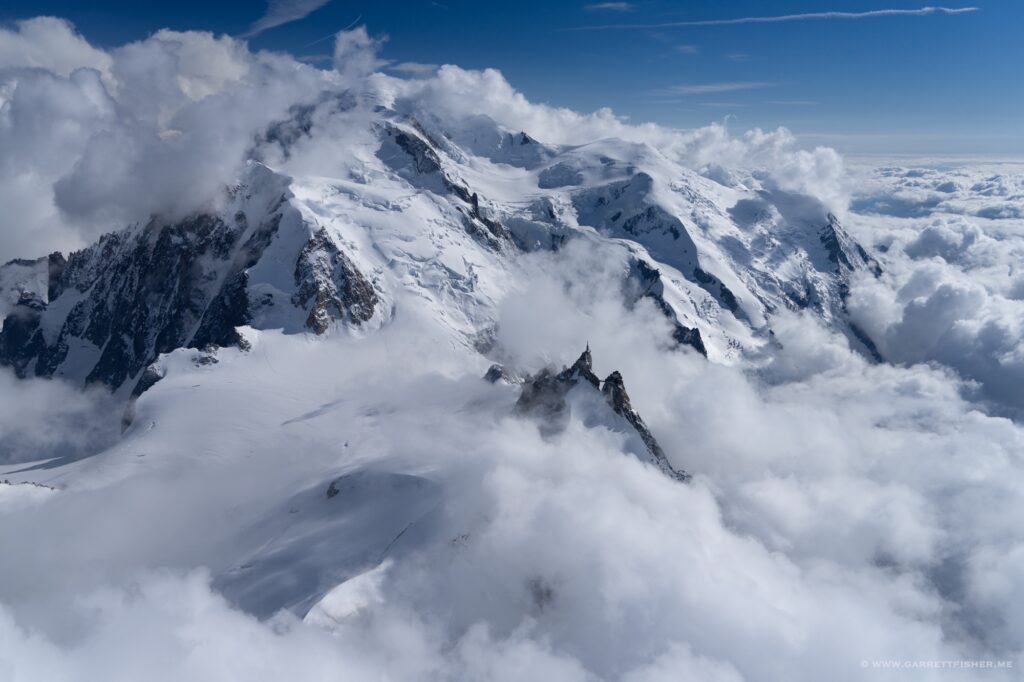 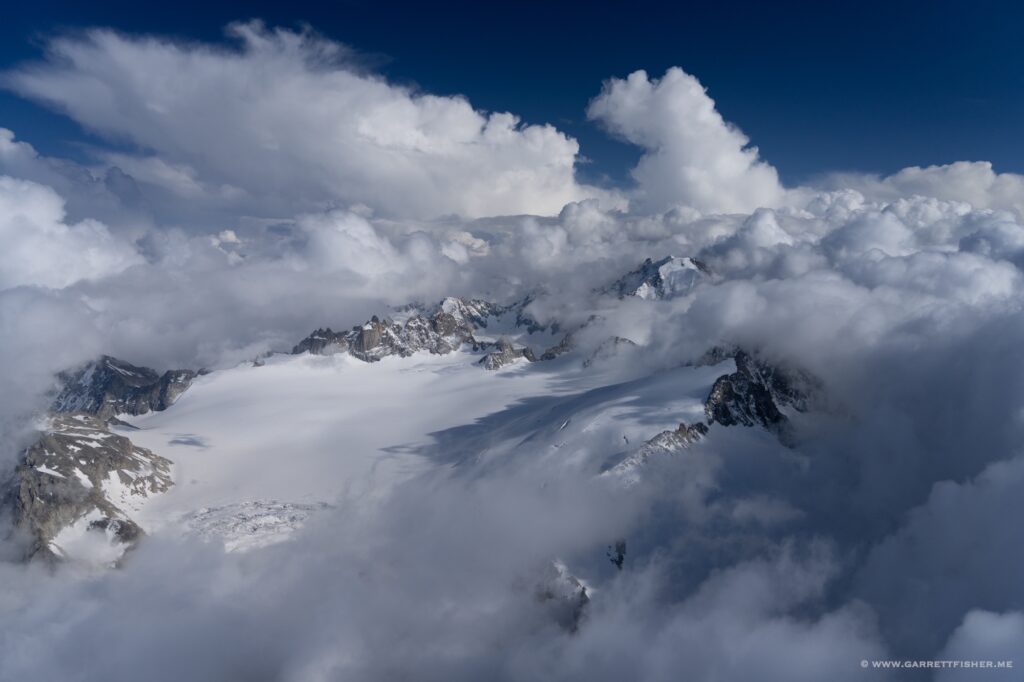 Mont Blanc from the Bernese Alps. It is in the jumble of clouds on the center right horizon. Nothing sets one’s mind straight like a jaunt to an ice cap without a sufficient jacket. Life is good. 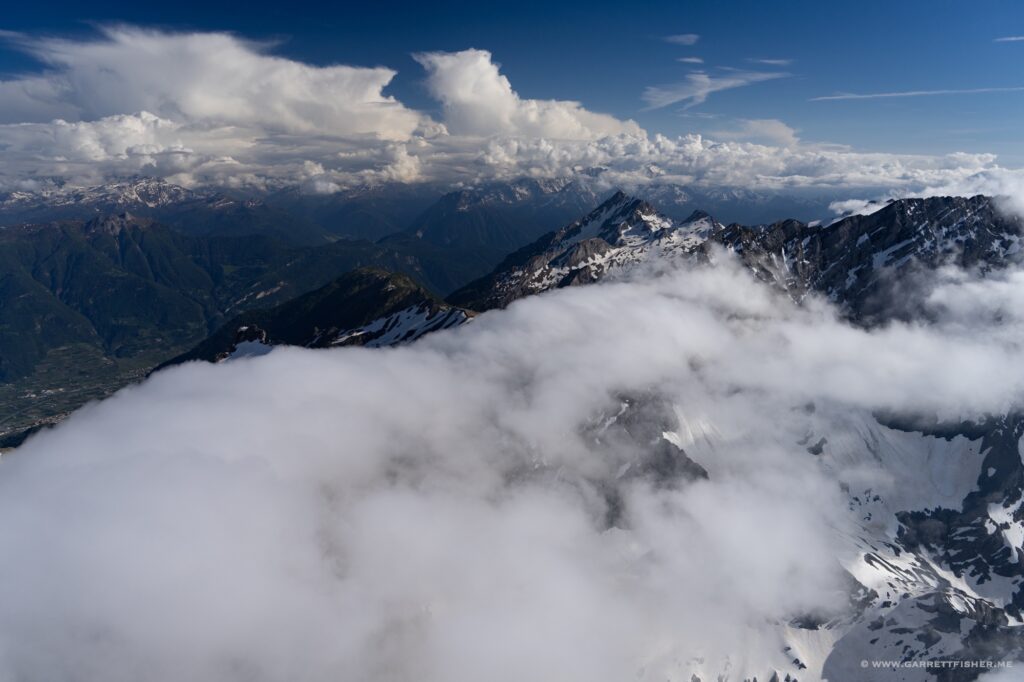