Summer in Yellowstone is a season of continual transition, one that surprises me each time that I view it. Situated at high altitude, it is no mystery that Yellowstone is extremely snowy and cold in the winter, so much so that the park is substantially closed except for snow sports for the majority of the year. As spring rolls around, snow melts at an increasingly fast rate, even though late season snowfalls can still happen, and in rare instances, some of the mountains can get snow any time of year.

Like most of the West, summer arrives at the flip of a switch. Terrain known for survival in the cold becomes incredibly hot under the strong, high-altitude sun, and famous Western dry air prevails for the majority of the time, so much so that it is a wonder that it rains at all. Then, on certain occasions, it rains profusely, bringing the bite of cold air back, leaving clueless tourists to fend off hypothermia while nursing yesterday’s residual sunburn. Hopefully a bear hasn’t broken into the same person’s camping food while meteorological misery abounds.

From the air, it is evident that the colors of the park are in continuous evolution during the course of the summer. For those who visit for days or a week at a time, the color of Yellowstone viewed on that trip is mistaken for the park as a whole, denying a visitor the opportunity to understand how variable the colors of Yellowstone are. Further, the view from the ground lacks the magnitude for year-round dwellers that can be afforded from the air. A few dried out plants here and there can be difficult to distinguish from the continuity of forest.

As the white of winter melts off, the brown of spring replaces it. Brown gives way to a green hue as summer approaches. When the switch is ideologically flipped to summer heat, flowers burst forth amongst a deep and profound green, the product of the rainy season in late spring and early summer as well as residual soil moisture from snowmelt. For those that like to avoid snowfall, cold, and anything associated with winter, this is the prettiest time of year.

By midsummer, yellow and gold mixes with the green as the heat of summer wears on. Even in “rainy” years by Western standards, the long-term heat of the sun and dryness of the air makes life for grasses and small deciduous plants difficult, and they begin various seasonal die-offs. By late August, golden is the dominant color, which begins to give way to a late season brown, which has more of a wheat-like appearance than the brown of early spring. There is still life in the final stages of summer, even though it is one of struggle against the elements and the heat.

Not too long after summer transitions from vibrancy to tired age and fatigue, the switch flips, fall colors set in, and winter follows on its heels with dramatic speed and intensity. Don’t let the weather and color of today fool you. Yellowstone changes its clothes on a regular basis.

Midsummer color, beginning to turn from green to golden. 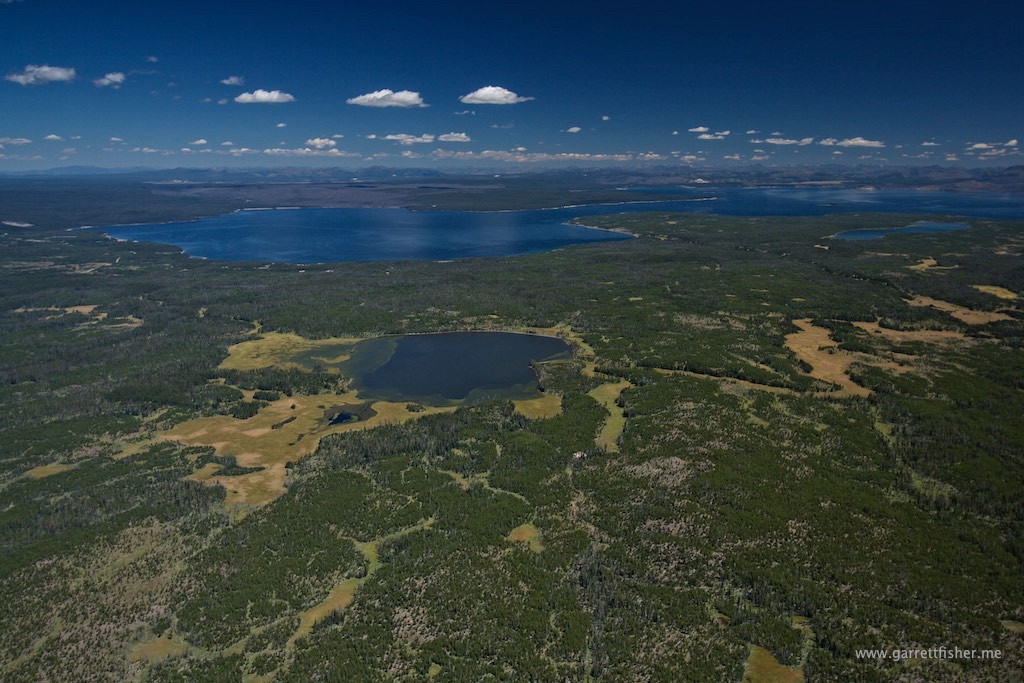 I was too busy flying and moving to Germany for the past year to bother to update my lovely map on the front page of the blog site (www.garrettfisher.me). The general idea when I started the blog was to have an erotic map filled with pushpins denoting locations where photographs were taken, including a preview of the image for those who clicked on the pin. That was all well and good until I ran into a bit of recursion cycle: too much flying meant not enough time for updating the blog, which meant that actually updating the blog would be even harder. I suppose that is the same cycle crackheads deal with (you say tomato…..).

I have finally added hundreds and hundreds of pushpins, bringing the blog entirely up to date. Since most people will not actually click on something yet still expect free intellectually (and sometimes physically) stimulating content to magically arrive and stimulate their minds without any effort, I included some static images below of the locations on the map.

To get a full screen version that you can pan, zoom, and click on previews, click here.

To see the map of European flying (what little there is), go to the front page of my blog and scroll to the bottom.

The whole shebang: all USA photos posted on the blog. 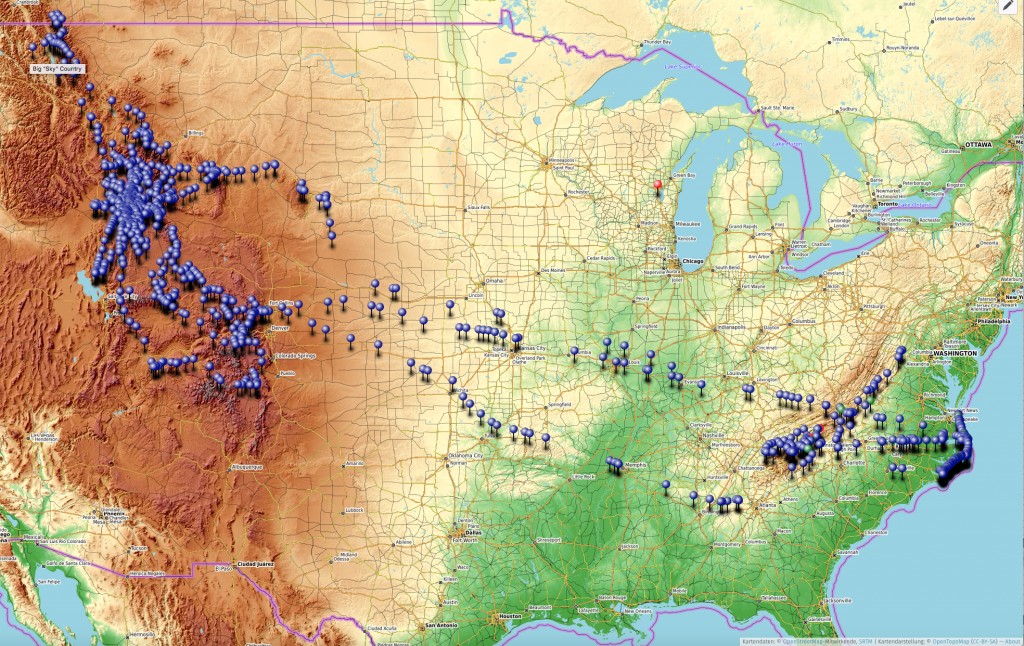 Basically, this is my flying last summer, with the exception of the flight over the Black Hills of South Dakota. After writing that last sentence, it occurred to me that next to no one can identify the Black Hills from this map. 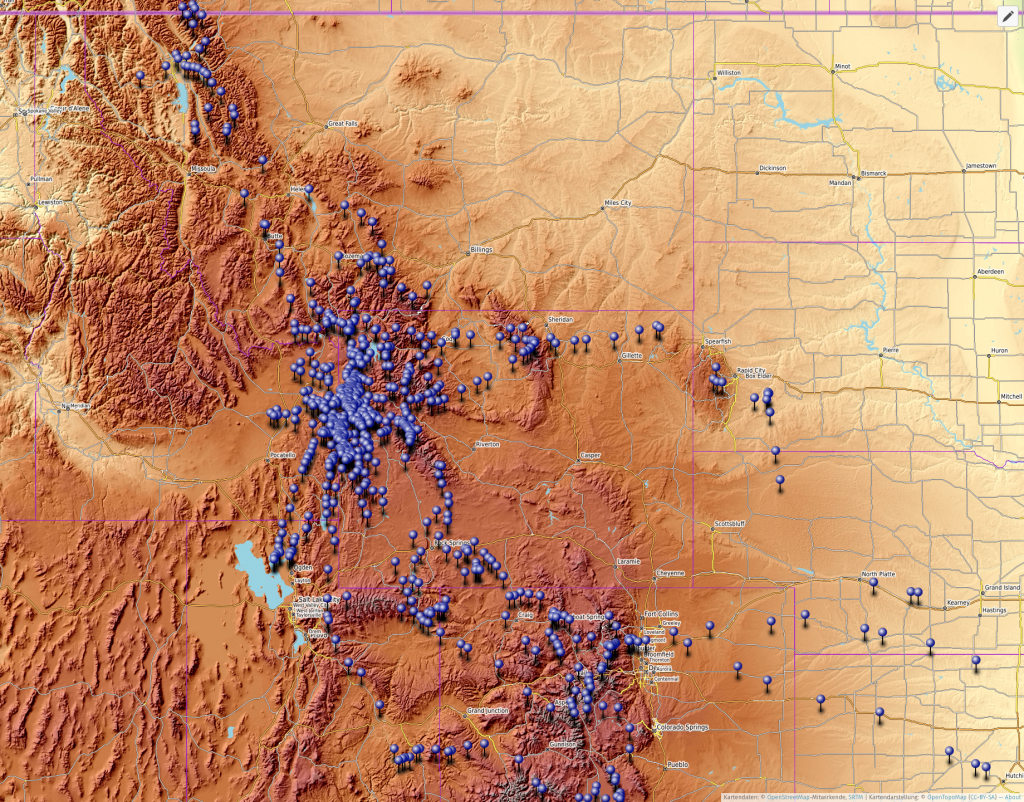 Don’t forget: you can get the live thing by clicking here (and you won’t because let’s face it: readers are too inert, and my bitterness is doesn’t help even though it is strangely attractive).