Well, this is something new. The book went live on Amazon a few days ago, and here I am blogging about it!

The project was an interesting story. Up until I saw a forest literally on fire on the Wyoming/Idaho border, I hadn’t given the idea any consideration. With flames bursting into the air, important business awaited, which was flying around plumes of smoke photographing the scene. About a week later, I saw a mushroom cloud over the border in Idaho, visible from the house. Like a normal human being, I saddled up the PA-11 and took off in the direction of a smoke cloud extending a mile into the atmosphere, chasing more fire. Pyromania aside, there is a theme about western forests, even when they are not on fire. Beetles have ravaged many forests, though not all. Some have burned; many have not. More importantly, for those who haven’t visited the West, the place is not a uniform forest. Density varies tremendously as the West is relatively dry. Its a complex picture, and I realized I had a few pretty pictures that would tell the story rather well. I must also mention that I really enjoyed the process of putting the book together, as it was like flying all over the West again – the scenery is quite moving. 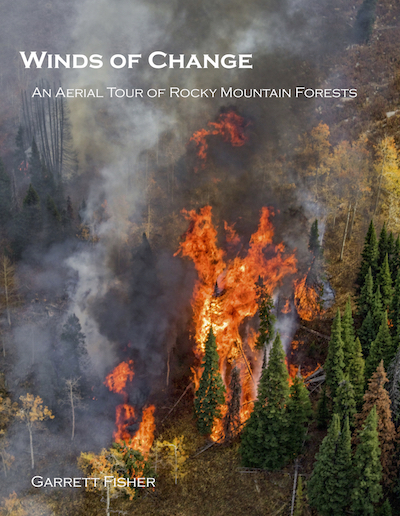