I initially read that the Hardangervidda Plateau is the “largest eroded peneplain in Europe.” That wasn’t attractive, so I kept looking and found that it is the “largest highland plateau in Northern Europe.” That won’t suit, so I dug around until I stumbled across a respectable site that stated that it’s the “largest mountain plateau in Europe.” That sounds about right for my “ours is bigger than yours” mini-series of blog posts, so let’s run with it. Here is the thing: it is a giant plateau, almost all of which is above timberline, for which I have seen nothing like it. It is a large pile of rocks, bogs, water, snow, ice, wind, clouds, and reindeer going on for literally hours of flying. In short, it is delightful.

Granted, there is an inverse relationship between its delight and the suitability of emergency landing locations. The place is hundreds of miles of relentless cheese-grader rocks. I would dream of a large snow field. I’d seriously consider a glacier. I might even dump myself into a freezing cold lake. Anything else is a rapid transition from flying….to coming to a complete standstill…likely almost immediately. Thankfully, it was not necessary to test it.

There is a certain freedom that arises flying above the high-altitude plateaus of Norway. The Hardangervidda is not the only terrain of its sort; it is merely the largest continuous feature of its kind. In many other areas, after a profoundly deep fjord bisects rock thousands of feet tall, the above-timberline glory continues in its resplendency. Many times, after having finished a glacier binge, I had a long flight back to base, most of which was over terrain like this. It was peaceful.

What is interesting is the raw freedom that is a little different than mountain flying in the Alps. The Alps rise from low valleys to dizzying heights and come right back down, often rather quickly. While that means incredible features, it often does not entail a continuous presence at high altitude or, if it does, it means going from near one peak, over a valley one to two miles below, and then to another peak. There is something about being near the ground yet in forbidding terrain that makes it even better (though, on balance, I prefer the Alps).

Norway’s relief is also largely measured in its fjords. The plateaus suddenly drop off, sometimes almost vertically, to bodies of water below. That is the majesty of Norway, apart from a few mountain ranges with some basic relief. In any case, it is something I wish to return to at some point…. except in the winter when snowpack can reach as much as 20 feet deep.

Crest of the Hardangervidda…in mid July. A few small glacial features lurking under the snow. 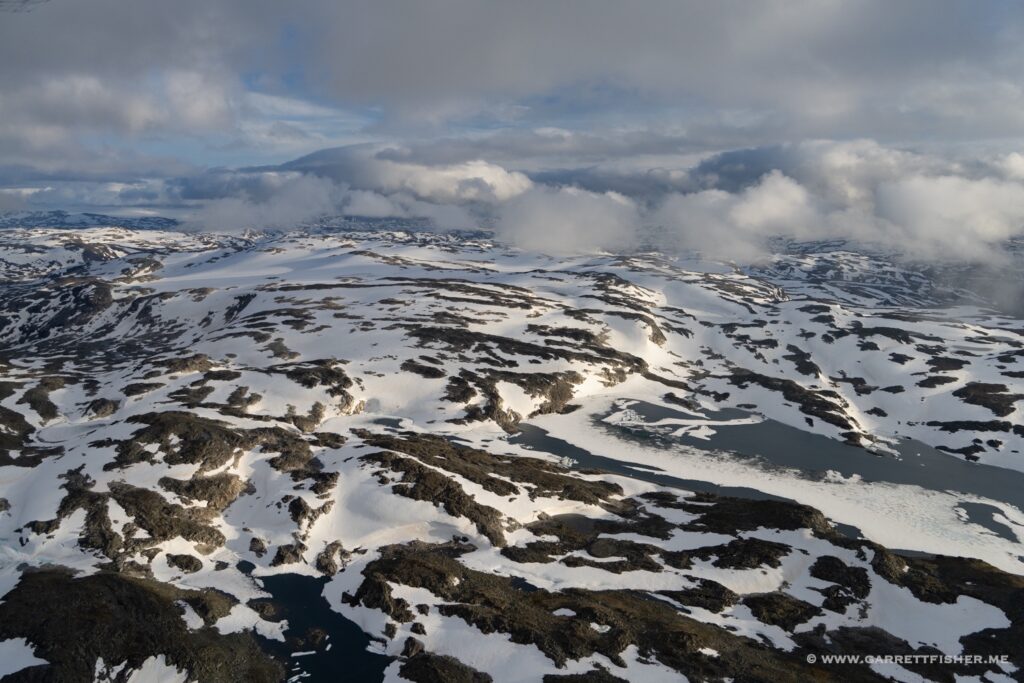 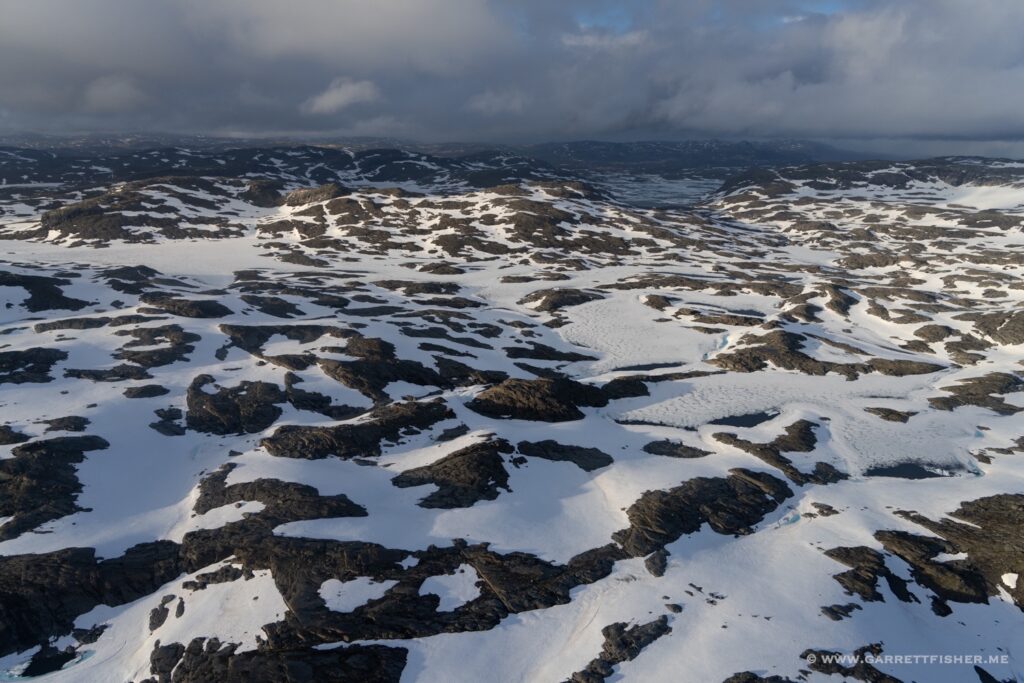 Hardangerjøkulen, the largest glacier on the plateau.

Cheese grater glory, though there was some snow at this time. I did have pause that a forced landing on “snow” might be a small lake, for which I would then fall through the ice and eventually die. This place is a cornucopia of ways to end up dead if the engine quit. 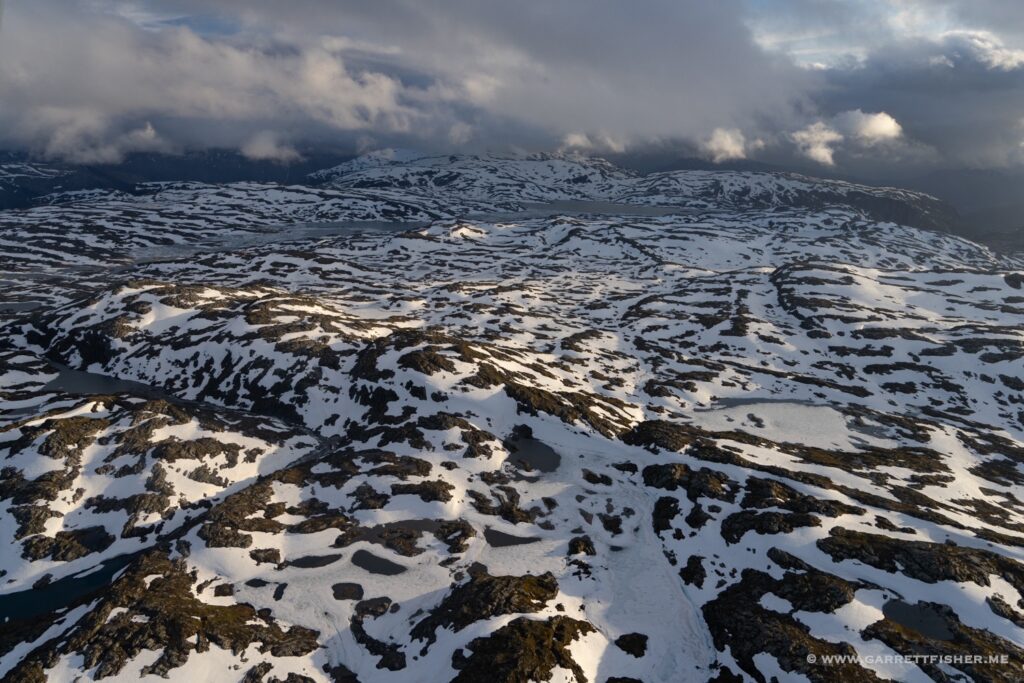 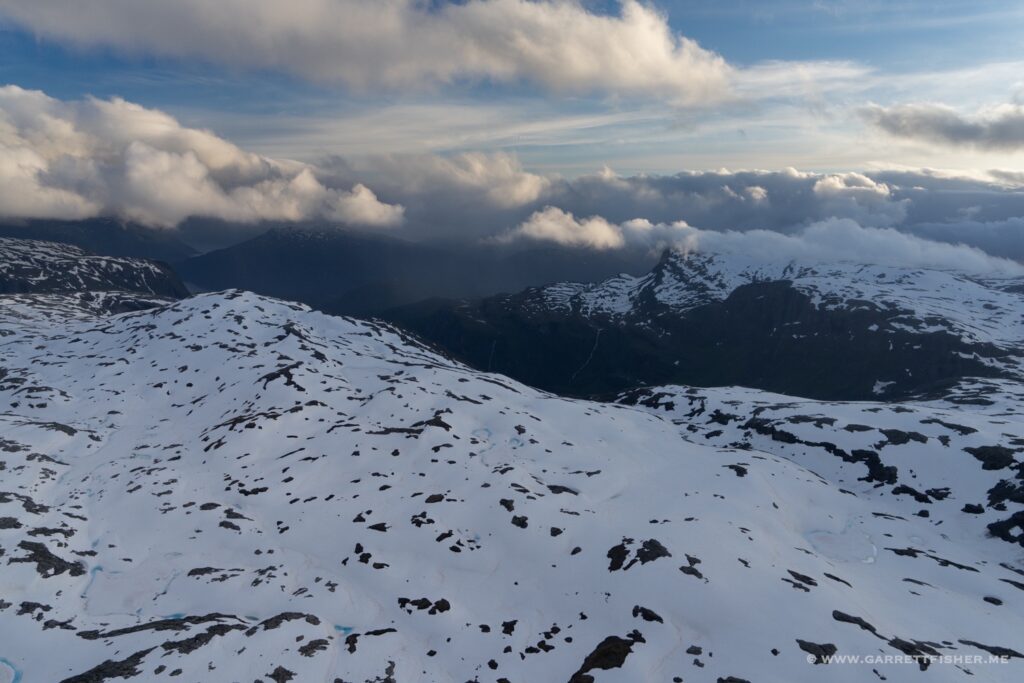 About a month later, in a similar (but not exact) location. If one wishes not to have a forced landing on the rocks, then just glide down below (trying to avoid massive power lines), and sink it into the water instead. I wore a lifejacket on every flight over the plateau for that reason. 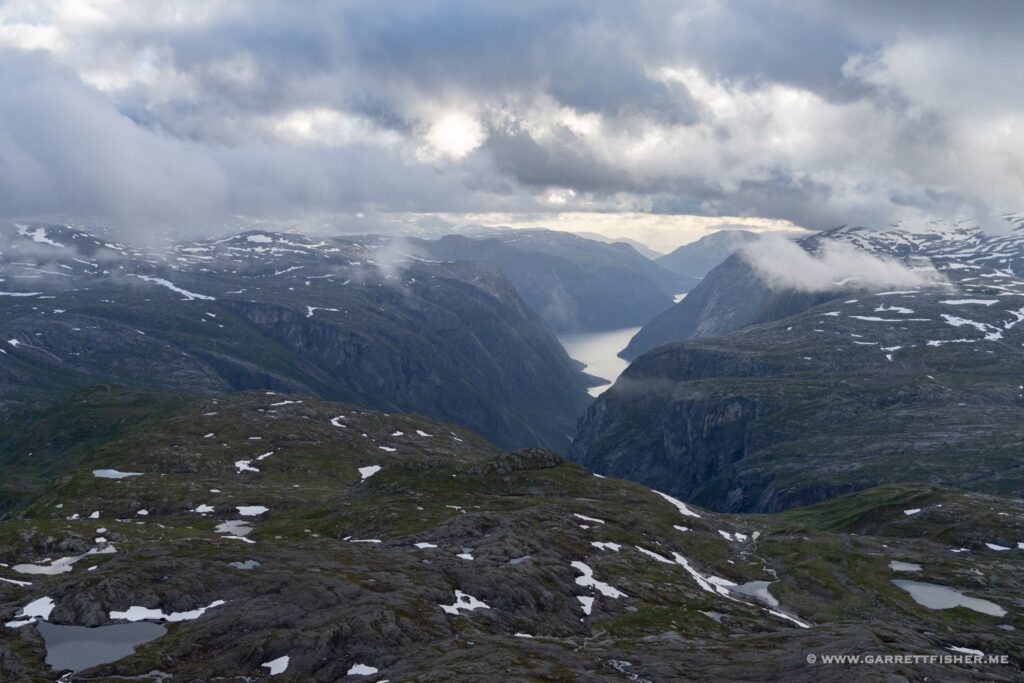 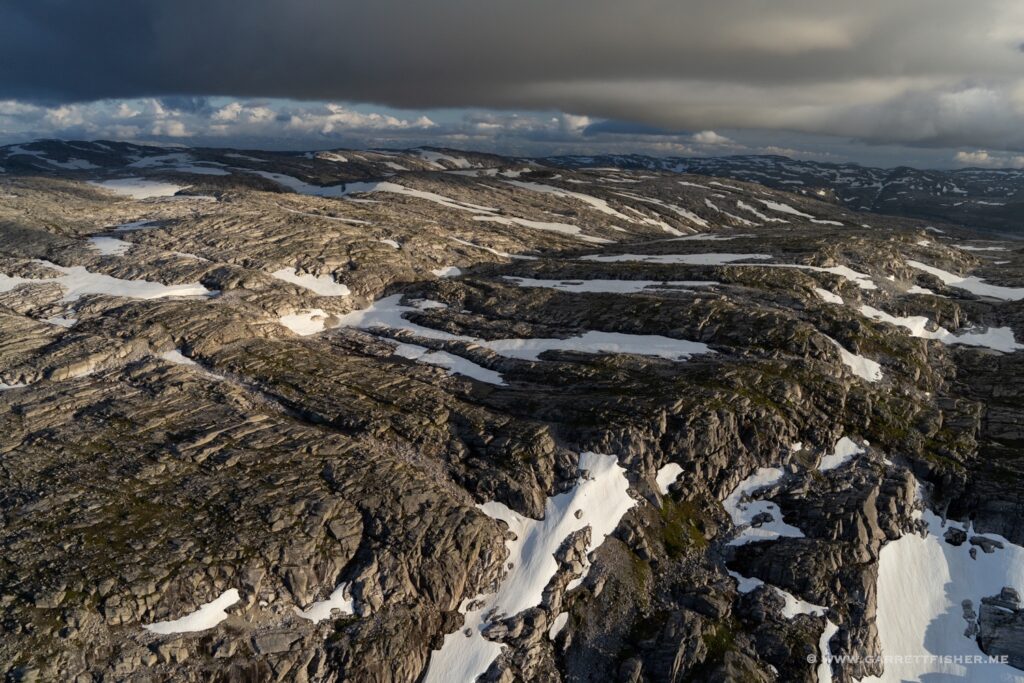 More of the contiguous section of the western part of the plateau. 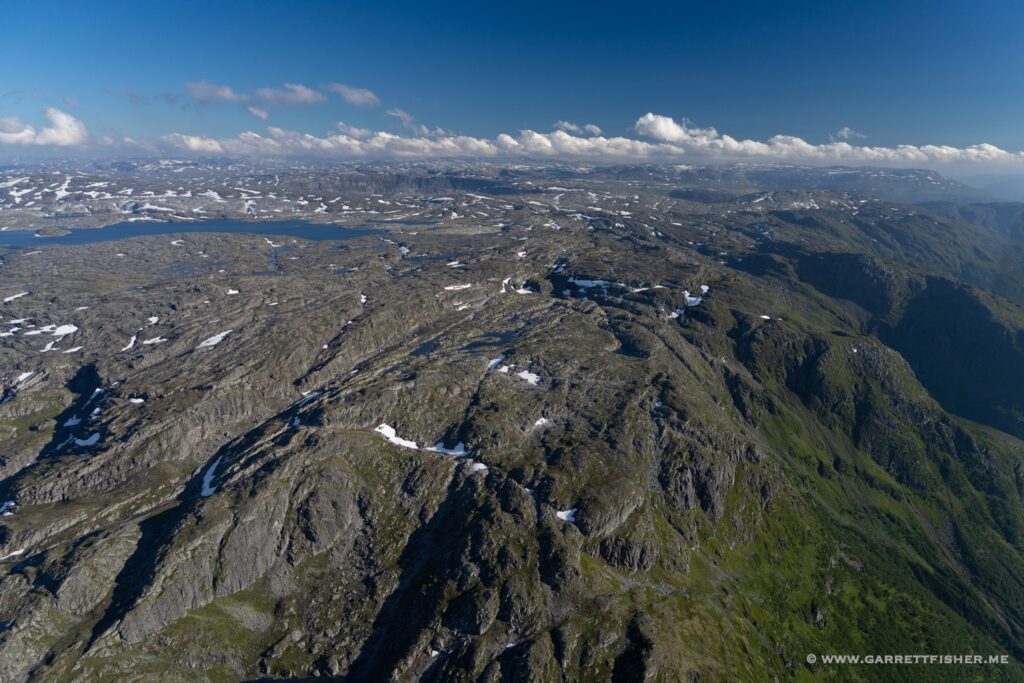 This time with some glacial features. To the left, it is still the plateau (above timberline and all) though lower. To the right is the highest part, where I spent most of my time. 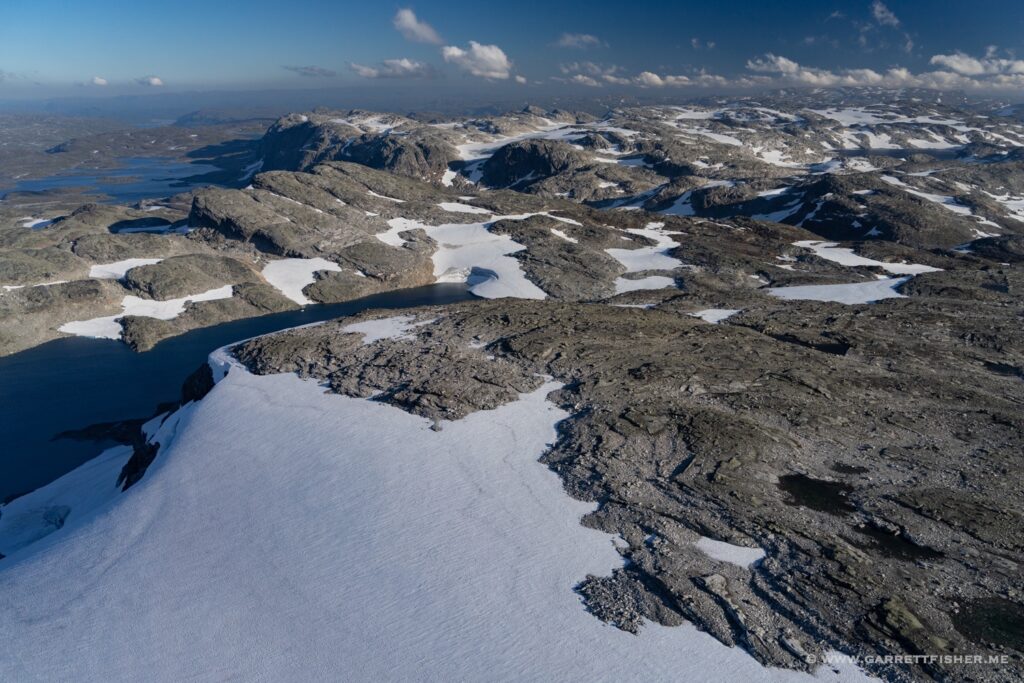 The eastern part of the plateau gets less gnarly, though landing here wouldn’t be much better. It is rougher than it looks. 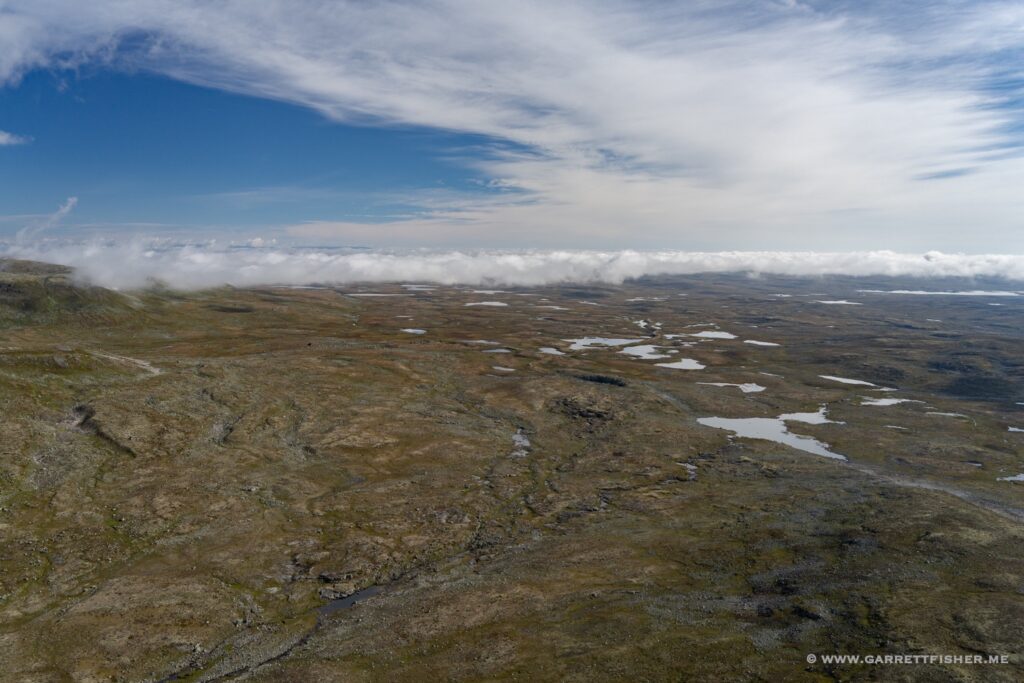 The lower part, looking to where it ascends to the higher part. No trees, no settlements…just rocks mostly. 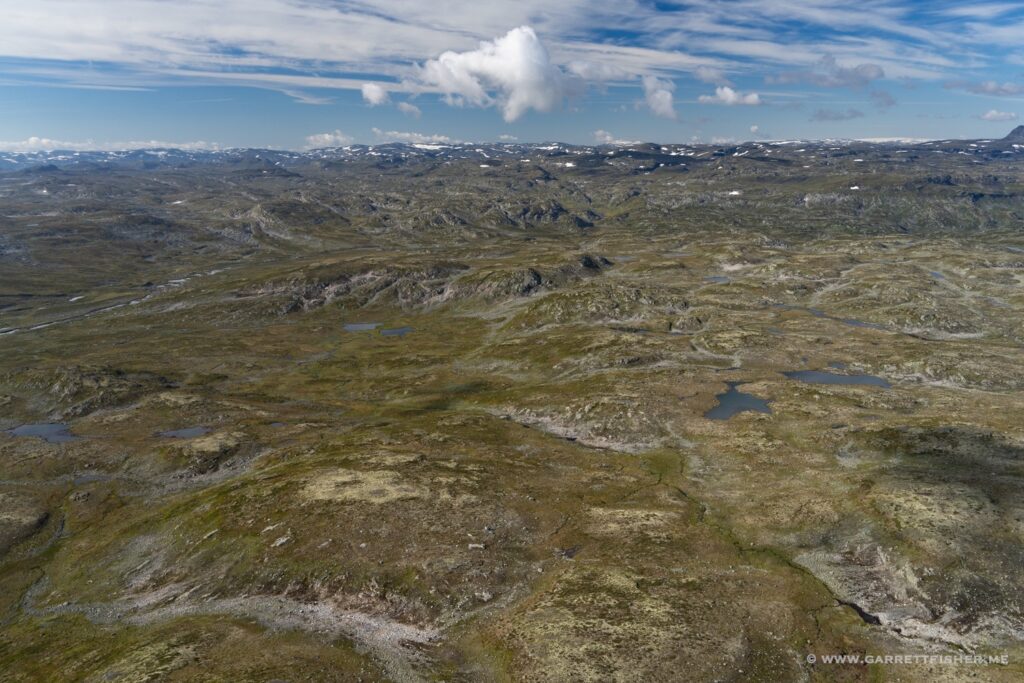 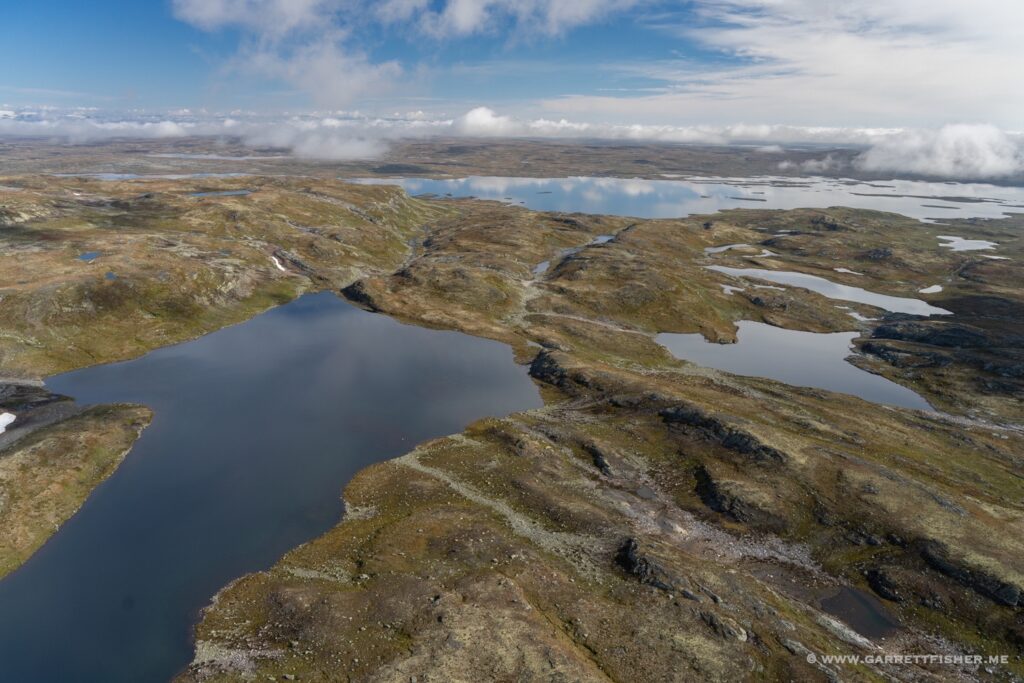 Getting lower, though vegetation is very boggy. Soil is shallow, so walking across much of this would be really squishy and difficult. 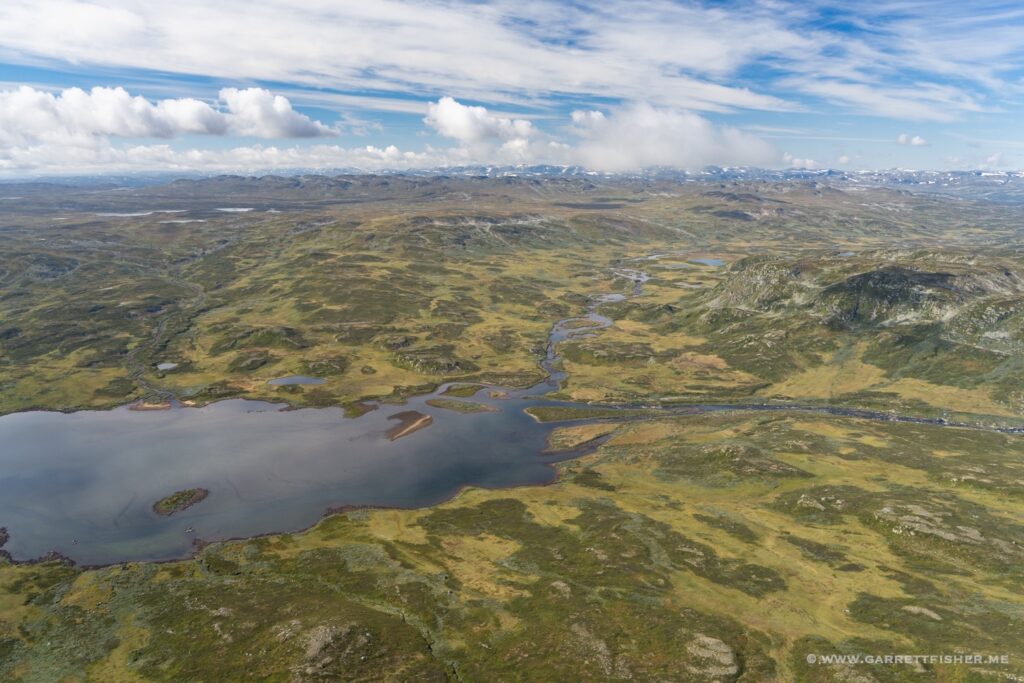 A different flight, earlier in the summer, this time from Fagernes to Voss. One can see scrubby trees giving way to grass then rock…and then it carries on uninterrupted to the right as it ascends. 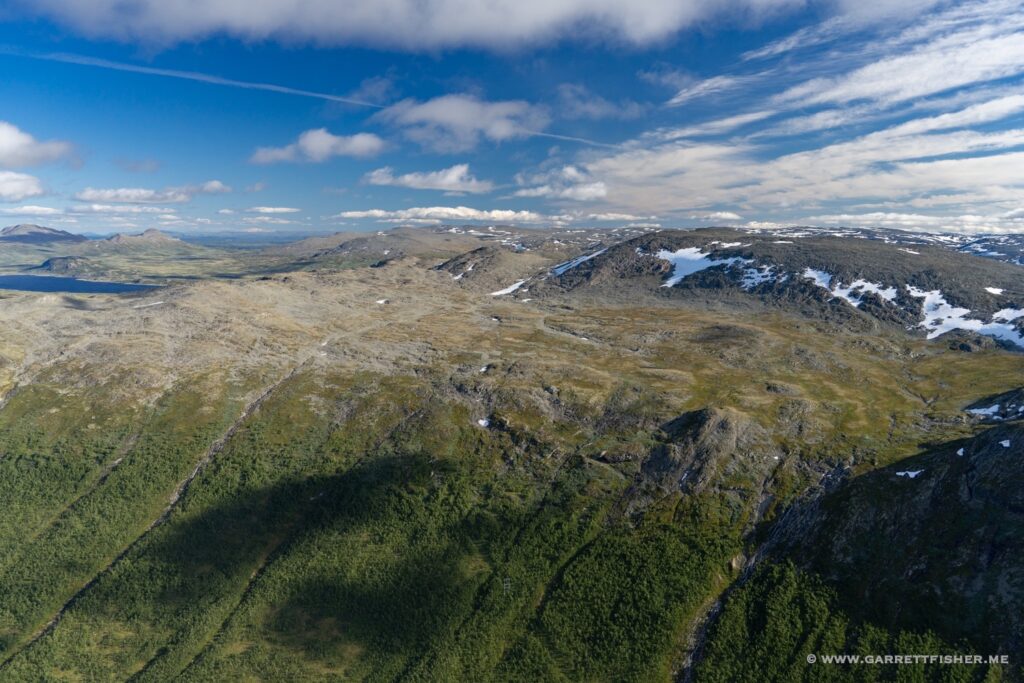 Even the valley below is mostly treeless. It plays tricks on the mind that the place is somehow semi-arid like the US West, which is totally false. This place is as wet as it gets. It is just cold, above timberline, and often devoid of soil. 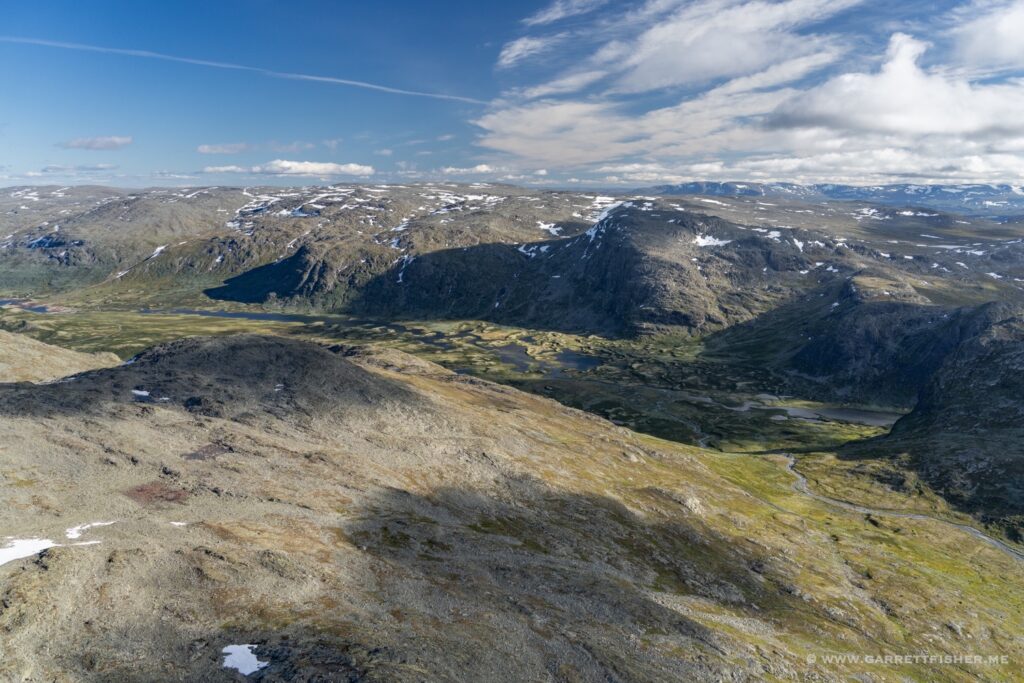 An abundance of water bodies substantiates that there is no illusion of “dryness” here. 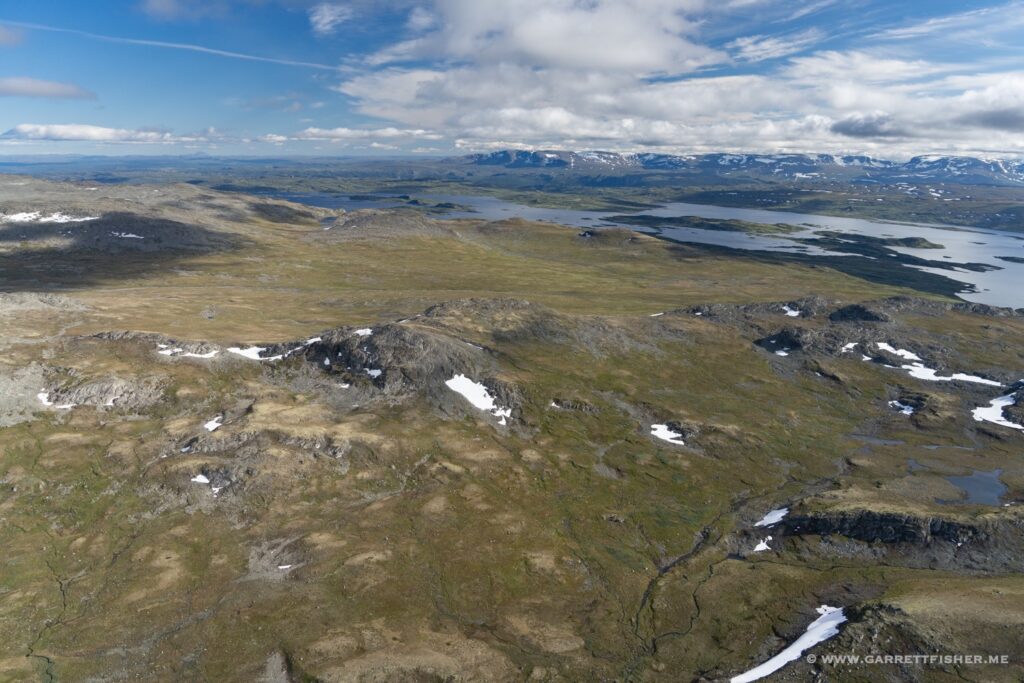