The flight was in mid-October, at 8,000 feet above sea level, in the Caribou Range of southeastern Idaho. It was a delightful early evening west of Afton, Wyoming, with an uncharacteristically thick pine and aspen forest, set against the arid rangelands just to the northwest of the deserts of Wyoming. The aspens were in bright autumn color, with thin high clouds partially obscuring the deep blue of the American West.

It wasn’t the stark beauty of the flight that made it memorable. One could say it was the opposite that made it stand out. After a summer of hundreds of hours of the most incredible flying I had experienced, it was a non-descript tail of a largely unknown mid-tier mountain range, photographed on an average day, with no outstanding reason for the flight. Those were the precise conditions for a person to engage in a reflective form of flying.

The plane would be heading to Europe a little over a month after that flight. It was on that evening that it occurred to me that, “you won’t be able to do this in Germany.” While I was heading for what I understood to be a next phase and an improvement in life, this was the first that I allowed myself to admit that the path would not be linear.

That flight in 2015 was part of a record-breaking year. 346.8 hours I flew that calendar year, from the Outer Banks to bottom of Colorado, including almost everything north to the convergence of Alberta, British Columbia, and Montana. It was something that I didn’t see coming, though I certainly wanted to repeat it. The problem that I did not know then was that it would take quite a long time before I could.

To fly that much in a year means that almost everything is working well. Health, finances, family circumstances, weather, free time, and location have to converge positively. They all aligned, living for less than a year on Alpine Airpark, Wyoming, what is now unquestionably a place limited to a very few. The Airpark had undergone a renaissance but was nothing of the expense that it is now. Health insurance was affordable, rent was laughably small, avgas was $4.25/gallon, and car fuel was $2/gallon. I was putting $10/gallon automotive fuel in the Super Cub last summer, having paid $15/gallon for avgas last spring. For 2015 to happen as it did, much came together. A practical view is that it was ultimately too early. Most who live in such places are almost retired, not in their early 30s as I was at the time.

It would take seven years to beat the record, with circumstances vastly different than the first round.

I didn’t think I would beat my calendar year record in 2022. I joked about the idea in late Spring, noting that I stood a chance, though I wasn’t sure it would happen. After flying 100 hours in Norway for the glaciers, I understood the idea to be in reach, though I still thought it was a bit silly, as the days would be getting shorter. Continuing my extended glacier season in the Alps, I still had a chance. By the beginning of November, I realized I could do it.

December was always the wildcard. It took some logbook analysis to understand that I fly very little in December. There is no reason other than length of day. Of all the places I have lived with a functioning aircraft in the month of December, I can pin the lack of flying on a motivational issue due to short days for most locales. The weather hasn’t always been a problem; Spain was often nothing but sun, and in one year I just didn’t fly the whole month. To break the record would mean flying in a way I never had.

It is a bit complicated when the sun goes down at 4:37PM. One must plan to leave around 1PM or 1:30PM to fit pre-flight, fuel and a reasonable flight in. That times a tad poorly against work and other commitments, though more regular and shorter flights seemed to work. I then hatched a brilliant scheme to fly to Spain with the Super Cub. After all, people use aircraft to get from point A to point B (or so I thought). That went to hell in a handbasket, though it knocked off a pile of hours.

I was left with the last bit in Switzerland, with the unheated PA-11. I managed to rig up a camping battery in the backseat to jack up the power to my heated motorcycle jacket. Aside from an ever-present terror of an in-flight fire or frying my overpriced electrical system, it helped blunt the self-induced misery that is sitting for hours above 10,000 feet in the middle of winter without heat. It didn’t help that the last two weeks of December were nothing short of windy the entire time. Who would ever think that sitting in 45kt winds in the Alps in a Cub for 2 hours is normal?

It took two aircraft instead of one to pull it off, a grinding pressure of the Glacier Initiative to give a reason to fly so much in the summer, and a bunch of other factors for it to work out. I am reluctant to say that everything is comparably ideal as before; I think I am too old and circumspect to make such a declaration. If anything, the sheer motivation of doing it was one factor, which forced the priority.

That 2015 flight lingers prominently in my mind. I have wondered if it is a proxy for the eternal question of which is better: flying in the Alps or the Rockies. That question cannot be answered in a simple form. I rather seem to think that the single flight represents the magnitude of the differences of both places and the path life takes, including how little we often know about it. Maybe I had a window into my older self or was just turning the page in my mind. In many ways, everything was simpler then, though it is something of an illusion of hindsight to put too much stock in the thought.

Trying out the low light settings on the camera, well after sunset. Base to final runway 26. 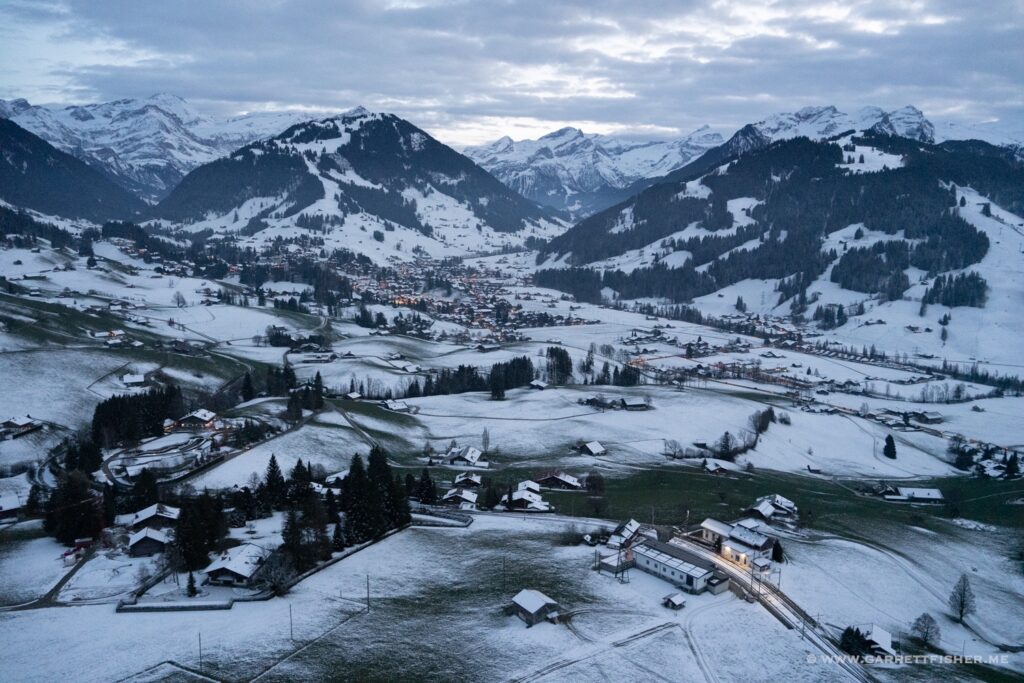 The flight that broke the record. Overlooking the Rhône Valley with Lake Geneva on the horizon. Unnecessarily windy. 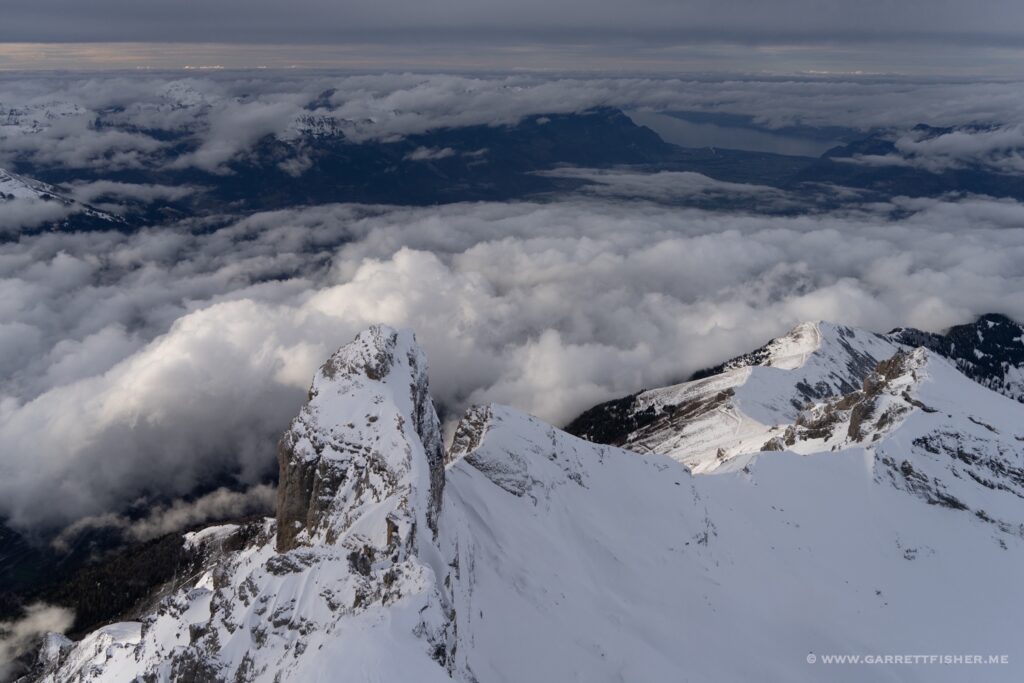 Mediterranean Coast of Spain with an eminently sore posterior, wondering why people think airplanes are used for transportation. 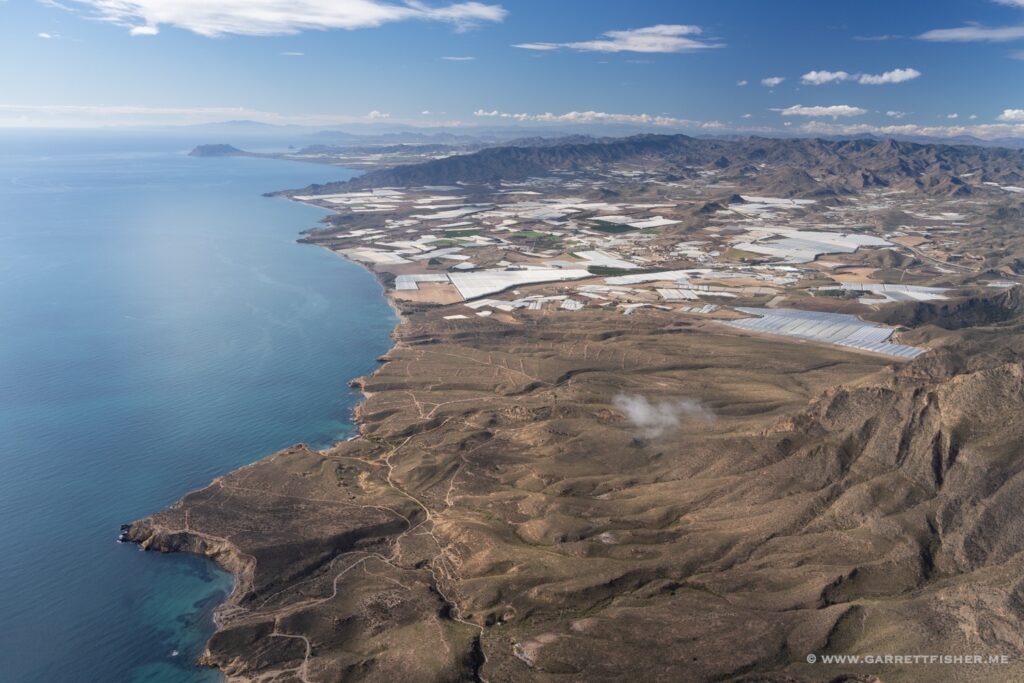 Flying around in wind and cold rain. 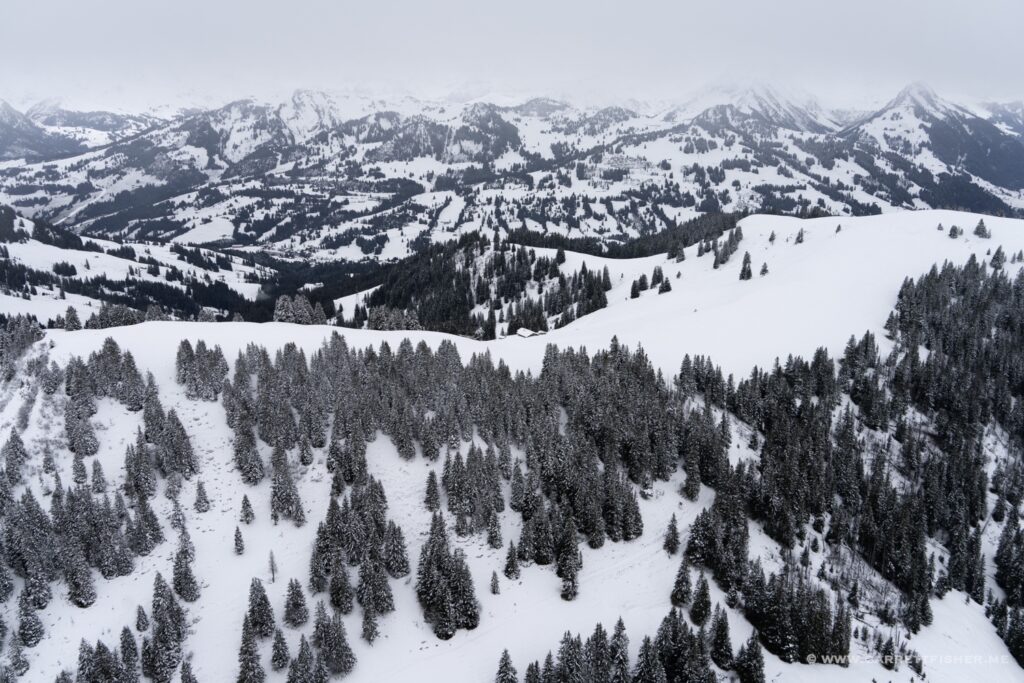 After getting pummeled by wind watching the sun set near Mont Blanc, racing past Dents du Midi at full speed, to land minutes before closing. 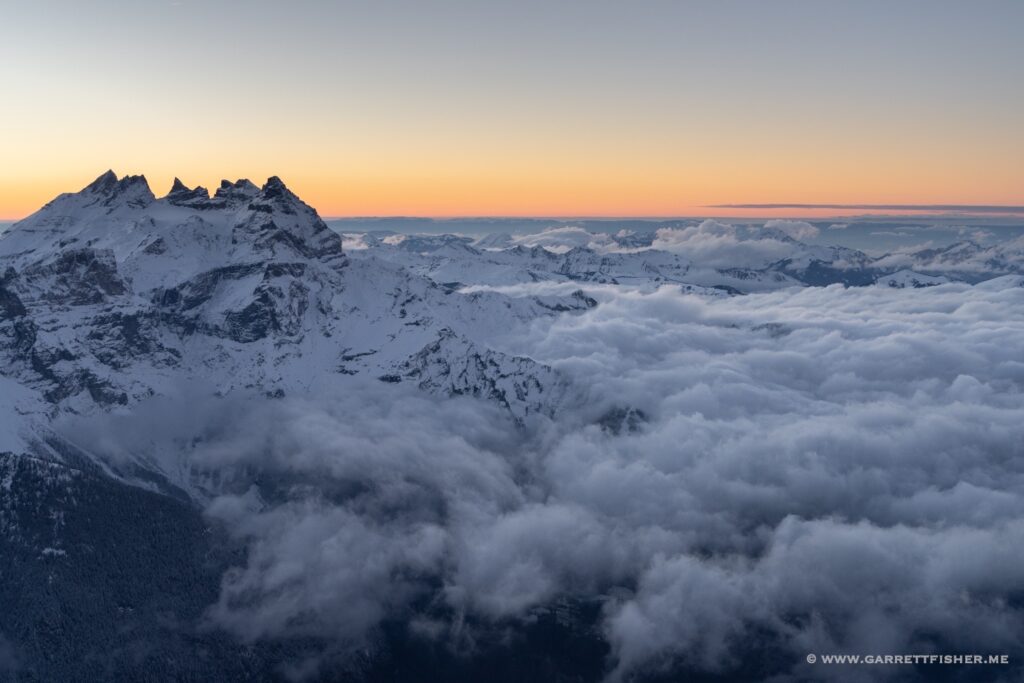 Wandering around the desert north of the Sierra Nevada in Spain. A few weeks later, a “pop up rave” would materialize not far from here, where 5,000 people converged, got as high as kites, and danced the night away. The police just watched. In the same week, a smaller pop up rave occurred in Bulle, Switzerland. By midnight the Swiss police had ended it and carted the organizers off to jail. 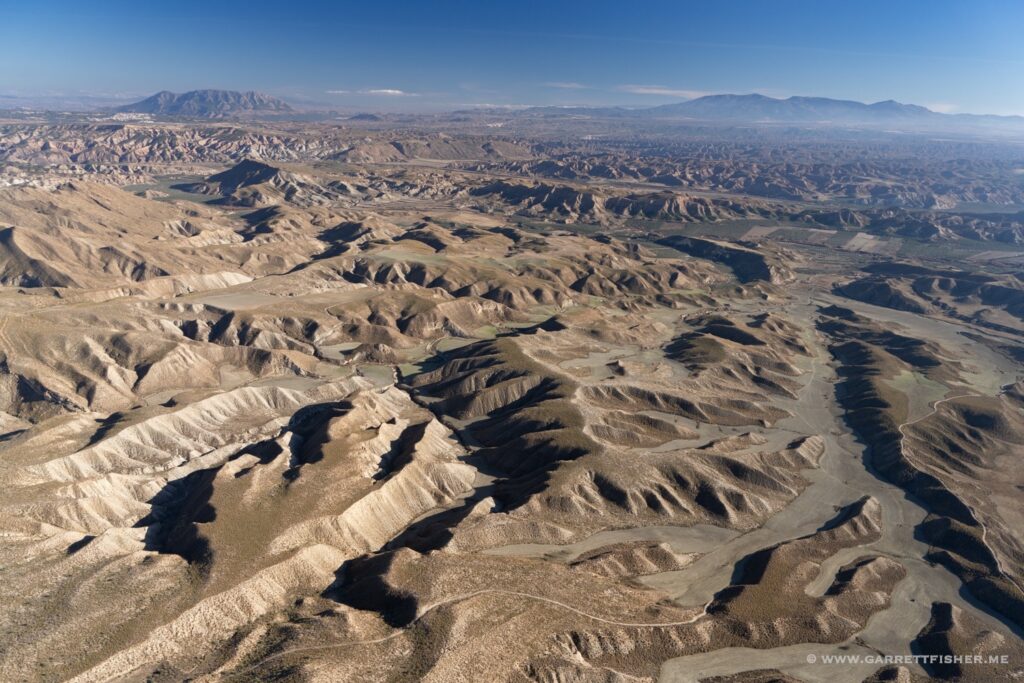 El Ejido, Spain. I have wanted to see this for over 8 years. Star Wars fans would mistaken it for Coruscant. 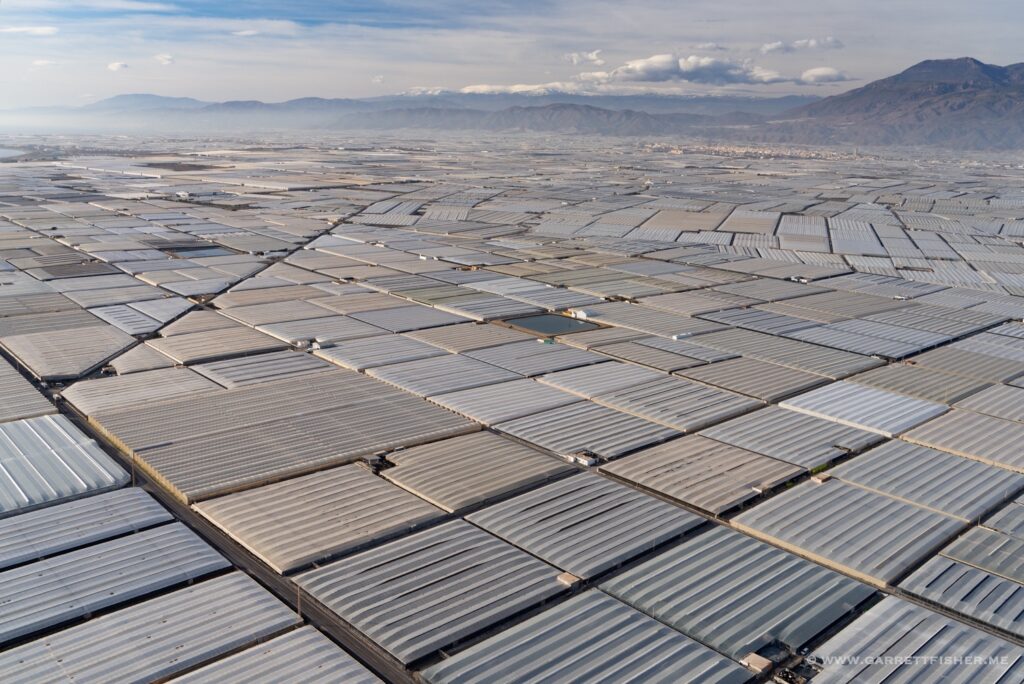 The camping battery electrical test flight. After sunset….turn on all the lights, crank up the jacket, and see what happens. Don’t worry, I tried it on the ground first. I had a Portuguese guy point a leaf blower at the wind-driven alternator while I tried to see if anything smoked with all of it running in the hangar. The best part about the Portuguese is that they do not think the involvement of a leaf blower with pre-flight planning is at all unusual. 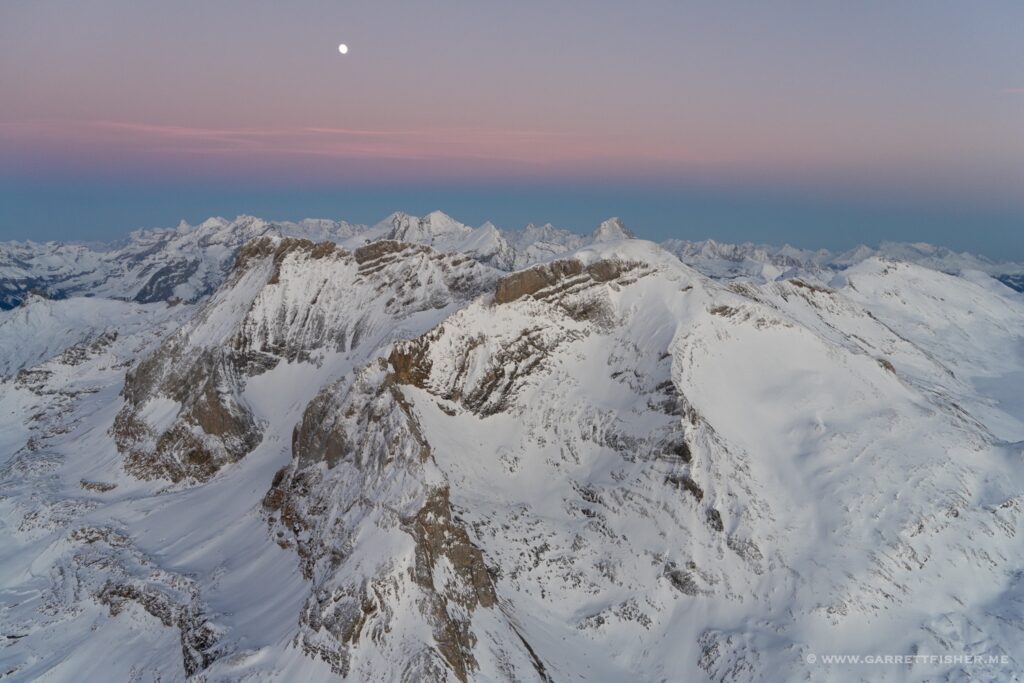 This was a fun flight. 35kt south Föhn all over the Alps. There was a “Guggiföhn” phenomenon during the flight near the Jungfrau, with hurricane force wind gusts. Something seemed fishy with the erratic wind observations so I stayed away from it, and then read about the phenomenon on a weather blog. 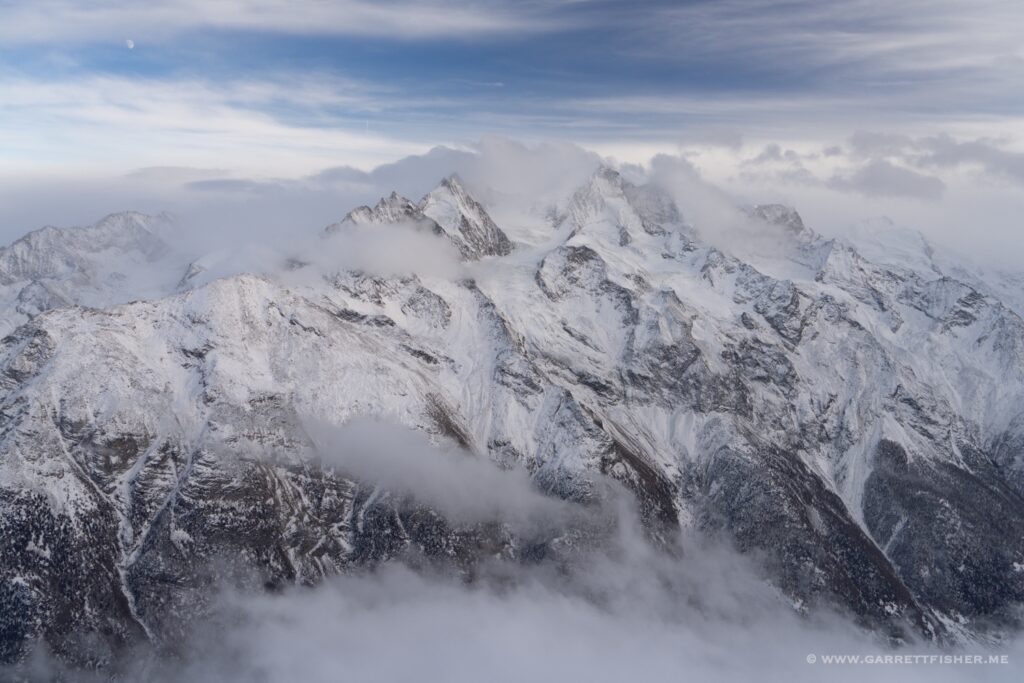 I have this one labeled “Himmelflug” in my catalog. That is German for “Heaven flight.” 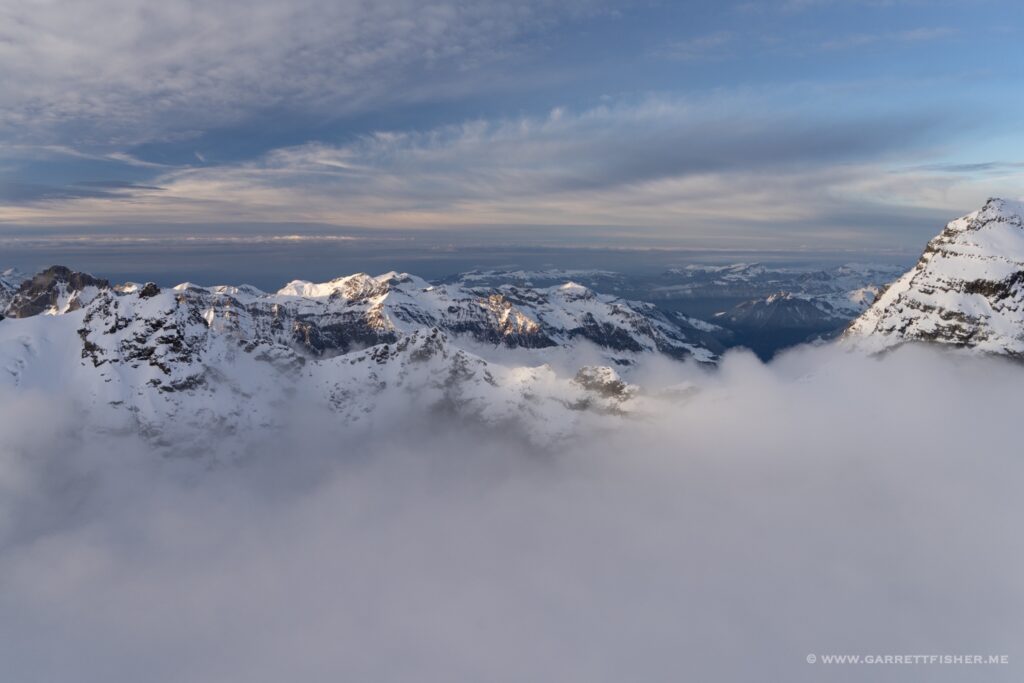 La Cerdanya in the Spanish and French Pyrenees. My first visit there since we left the valley. 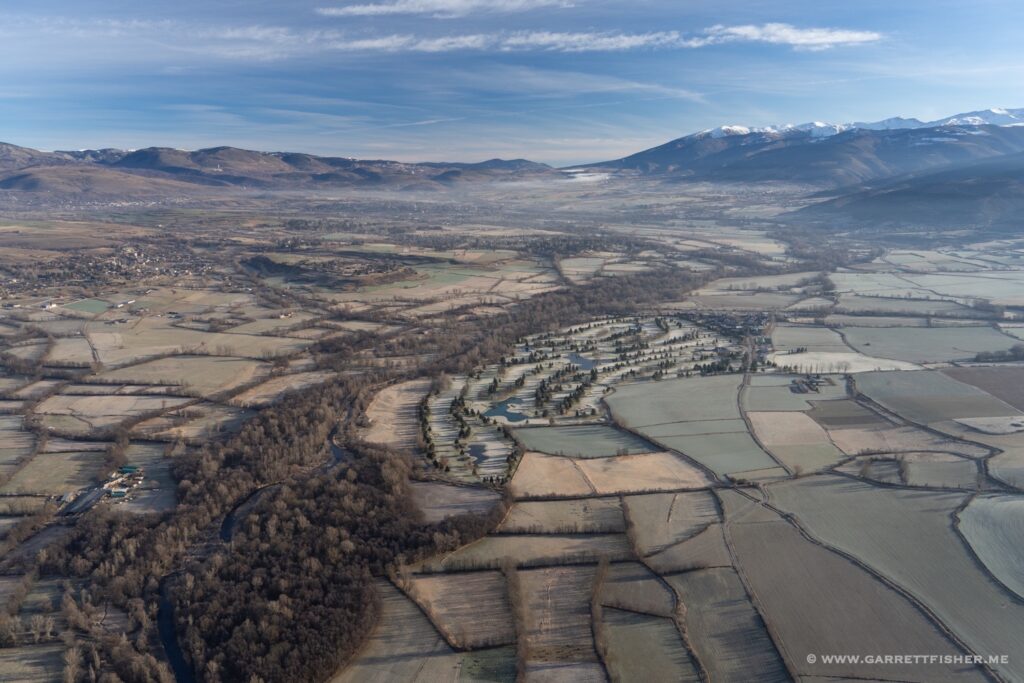 Solitude. Nothing short of heaven, provided that the propeller continues to spin. 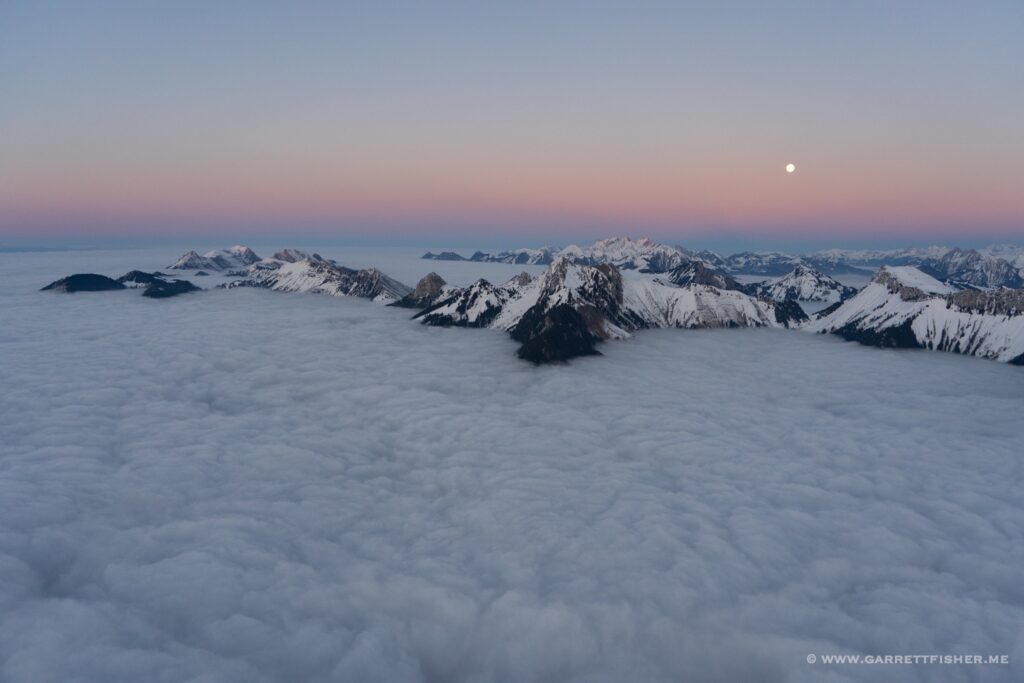 Exceptional wind as I chased a front that was heading east. It revealed brilliant sunset tones in its wake. 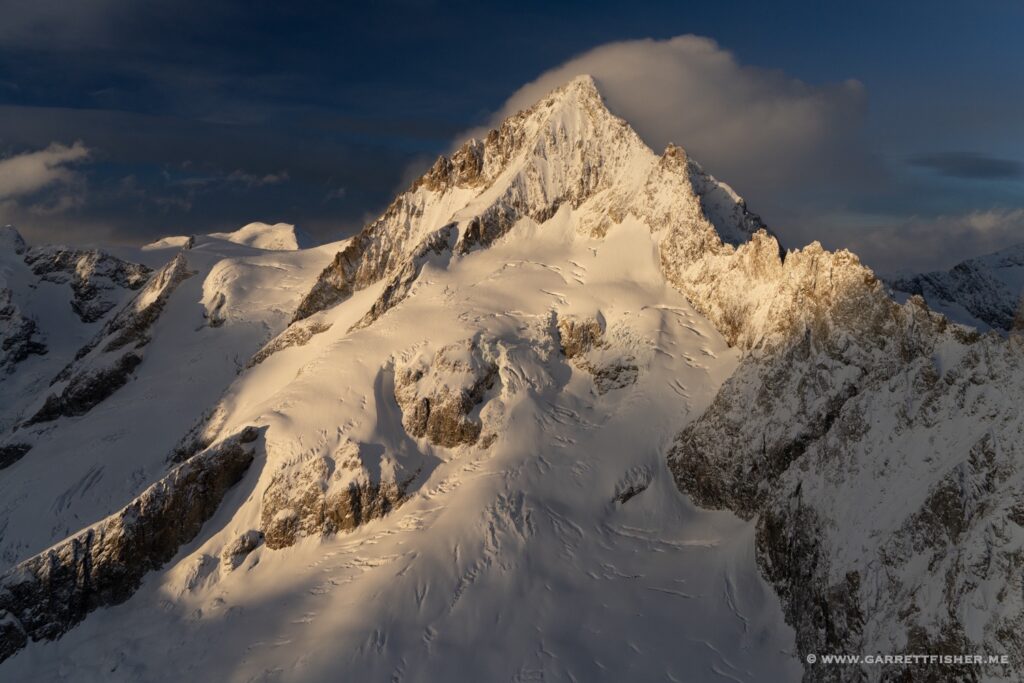 What 45kt winds look like at 11,500′. This is taken using a zoom lens from afar, of the Mont Blanc Massif. It is of blowing snow on the ridges. I got to enjoy this view for a solid hour, cruising at 23kt ground speed due to such ridiculous wind. It was not bumpy though. 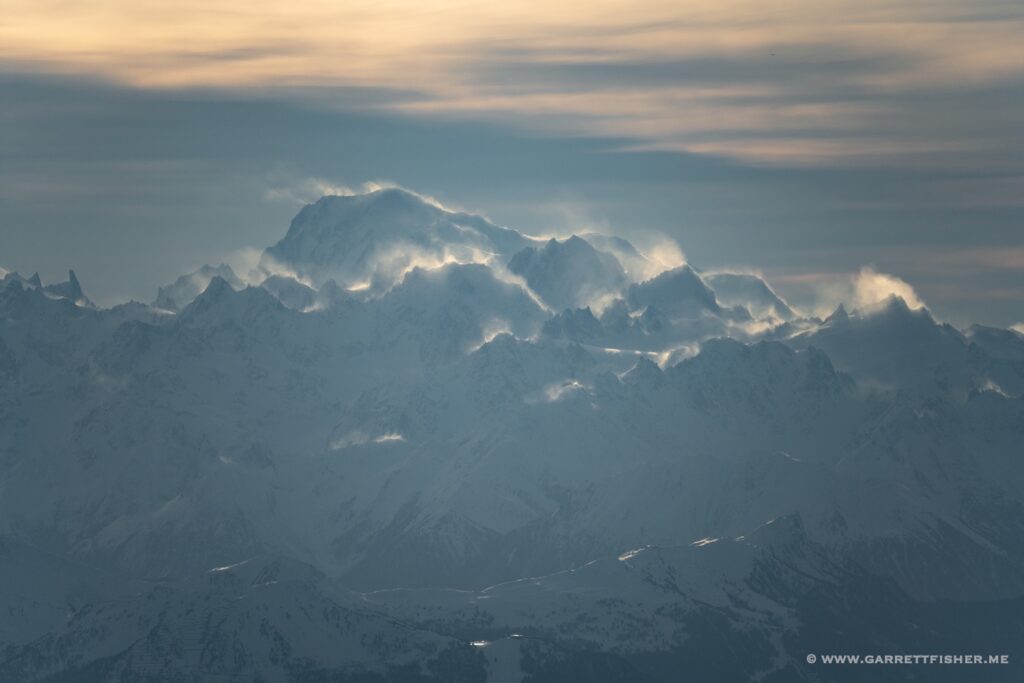