It is not unreasonable that many of the largest geological features by various measurements are found in a similar location. Sizable tectonic movements coupled with abundant precipitation has created some monstrous icesheets in the past, the movement of which created various intriguing things. The tallest mountain in Norway, Scandinavia, and Northern Europe is one of them.

Galdhøpiggen is 2.469m / 8,100’ tall and found some distance east of the Jostedalsbreen. Precipitation here is much less than over the aforementioned glacier, owing to a range of mountains that absorbs the first round of incoming Atlantic moisture. It is higher and further inland, which means that temperatures are colder. Therefore, a few glaciers flow from the mountain.

The elevation of the mountain itself is on the low side of my exploits. I used to base the PA-11 at a runway sitting at 9,927’ in Colorado in a valley, whereas in almost every flight in Switzerland, I have to exceed 8,100’ to get over terrain to get where I want to go. On the other hand, when I did the peaks over 6,000 feet in North Carolina, where I presumed it would be “easy,” it was quite challenging due to weather and distance.

This peak is part of a list of 189 peaks over 2000 meters in Norway, of which I have now flown them all. True to form, the list seemed easy as I sipped tea while sitting in front of my computer over a thousand miles away. When it came time to fly to them all, it was a lot of work, due to a fusion of wind, poor weather, and distance from airports. I suppose this will be the reality of every mountain peak conquest, which is part of the fun.

Hurrungane Range. This deceptively from a distance looks like the tallest peaks in the region, though it is not. Galdhøpiggen lies a bit to the east. 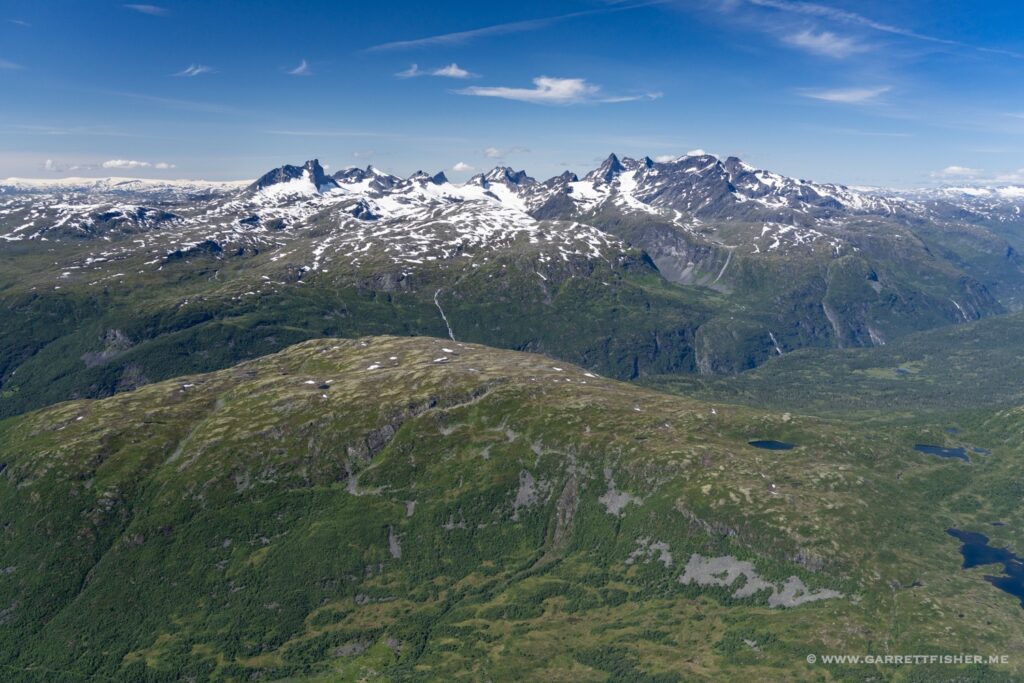 Vetle Skagastølstindane from the north. Still not the biggest one…though it prominently appears on the horizon all the time. Styggedalsbreen flowing from it. 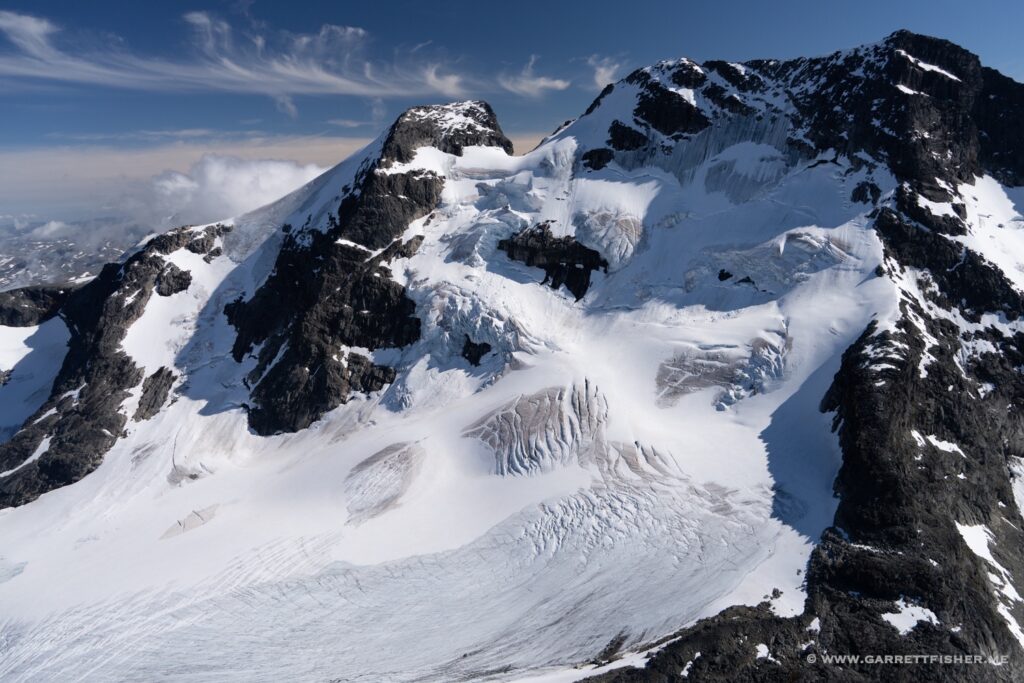 Galdhøpiggen, not looking all that prominent, though it is the biggest one in Europe north of the Tatras. Svellnosbrean glacier below. 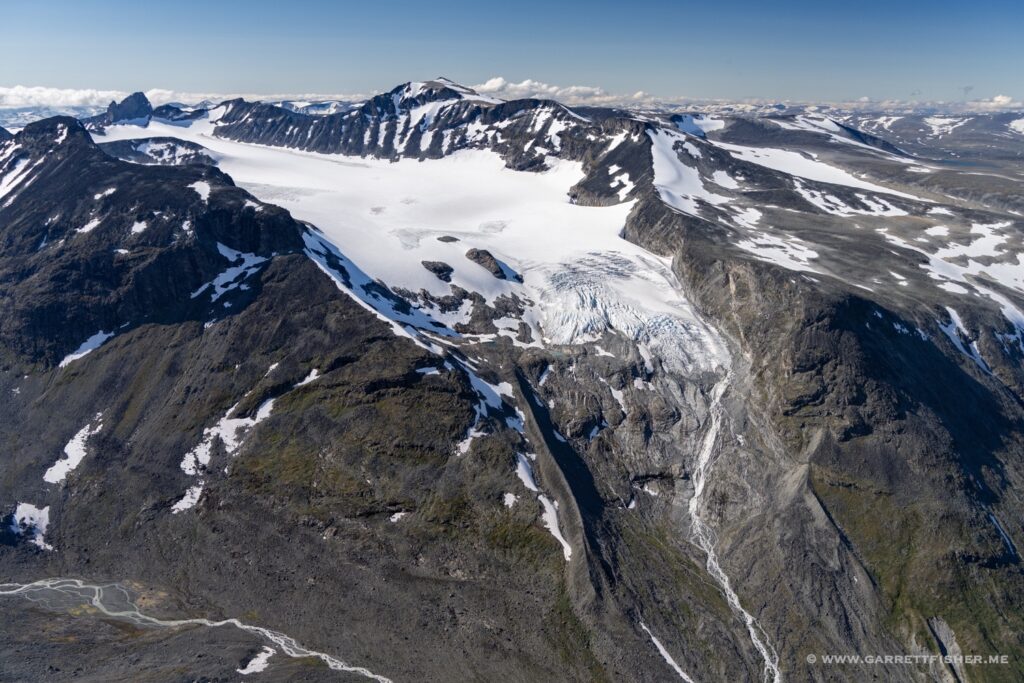 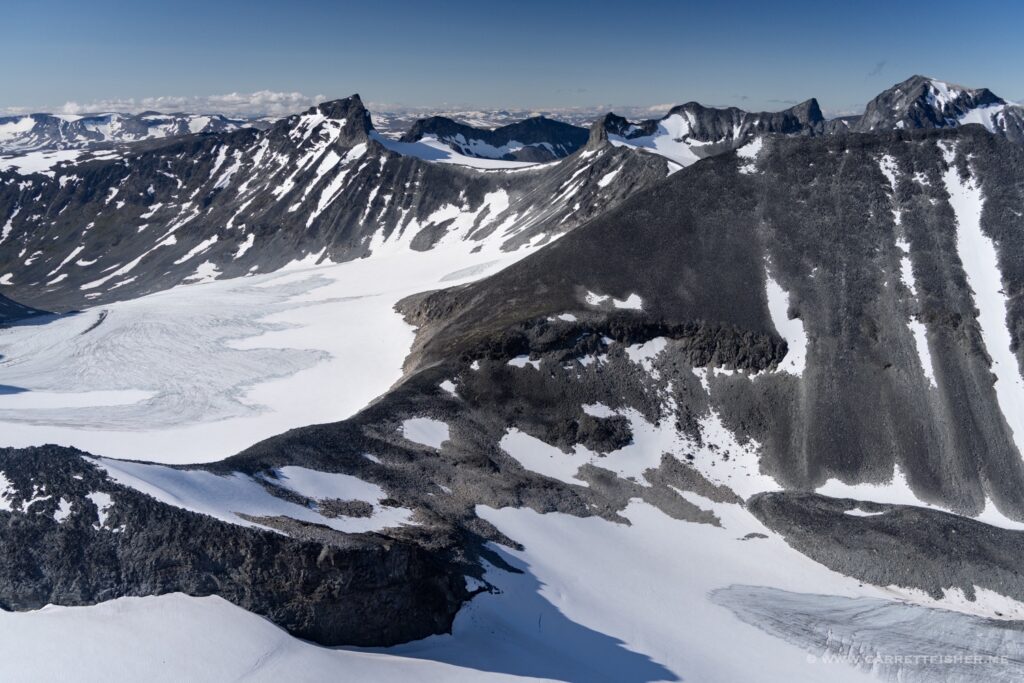 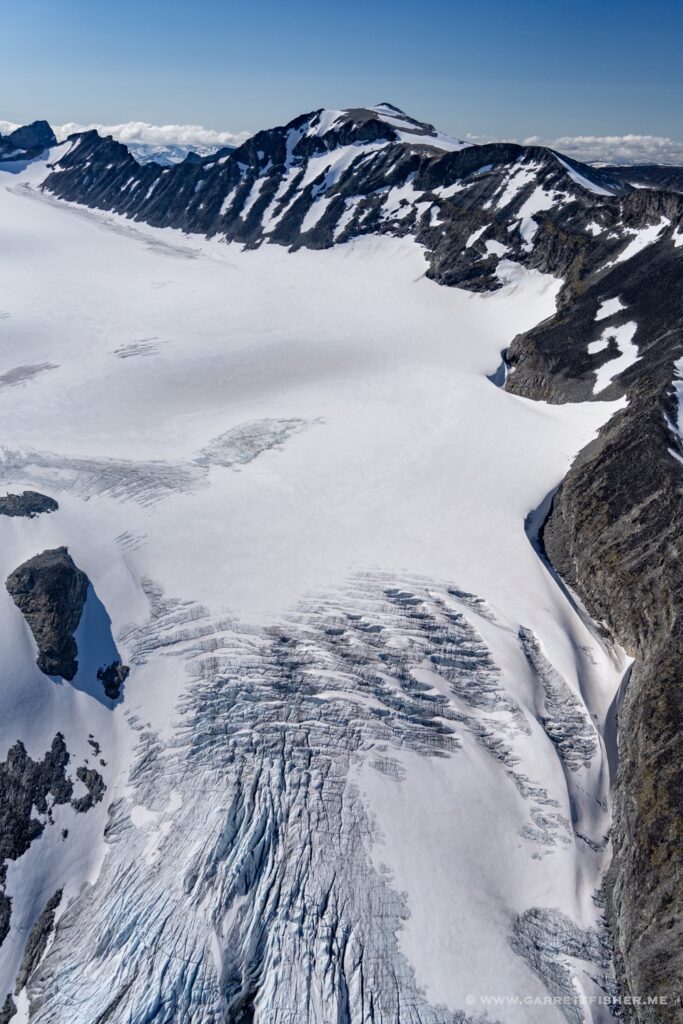 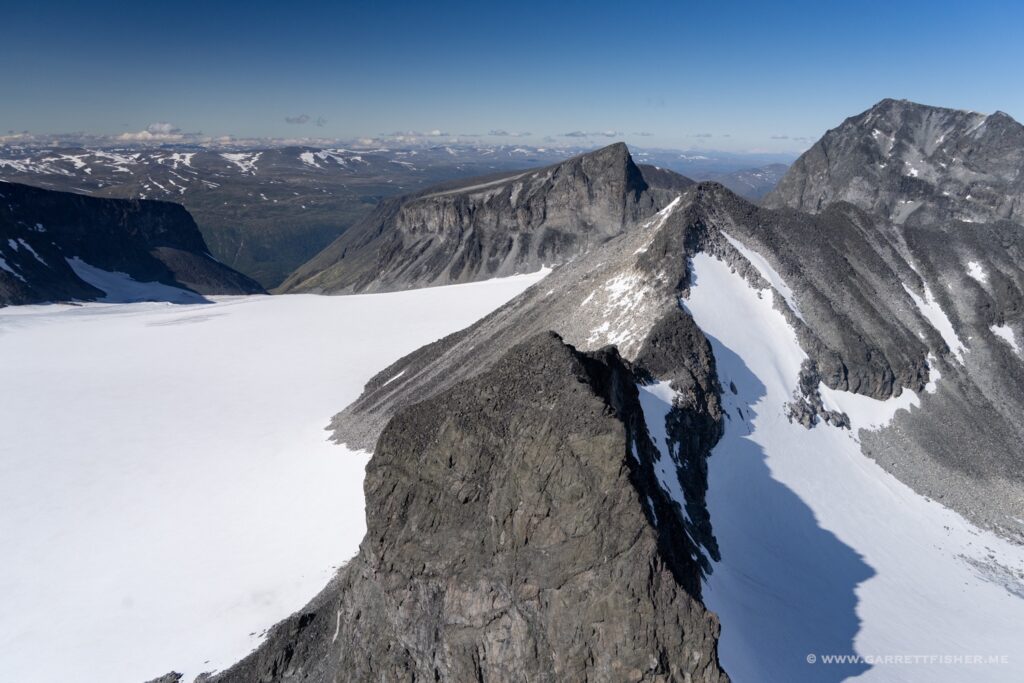 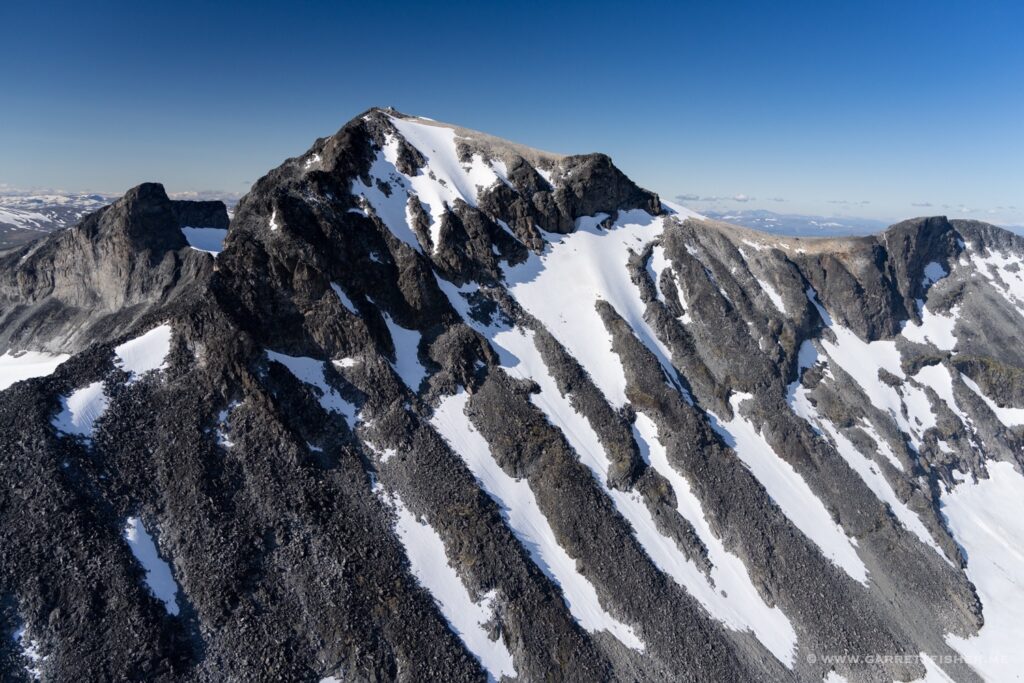 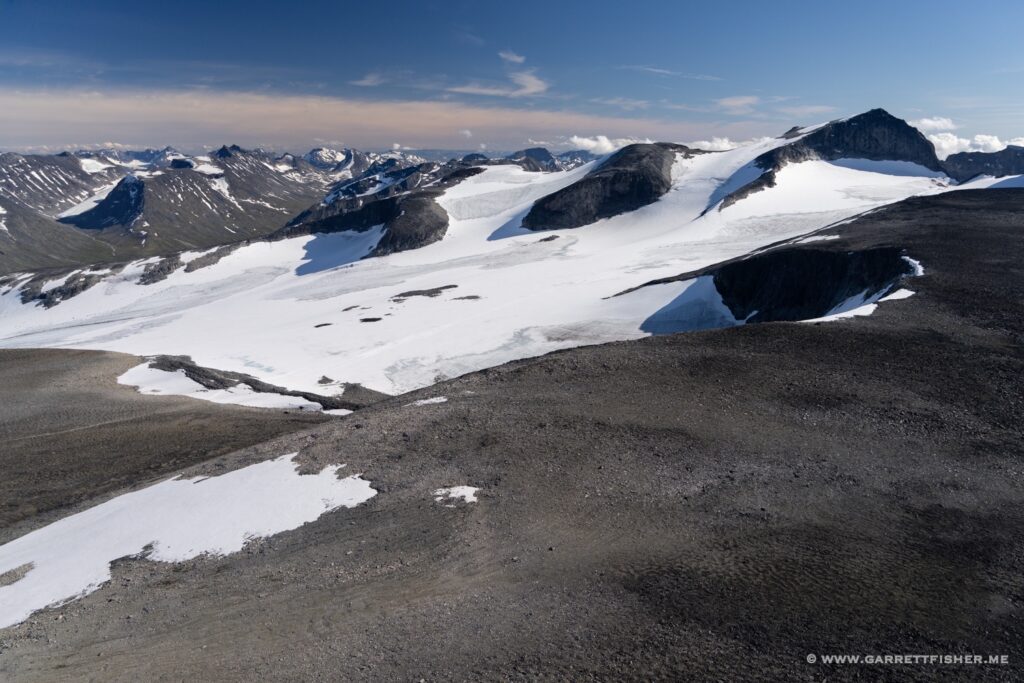 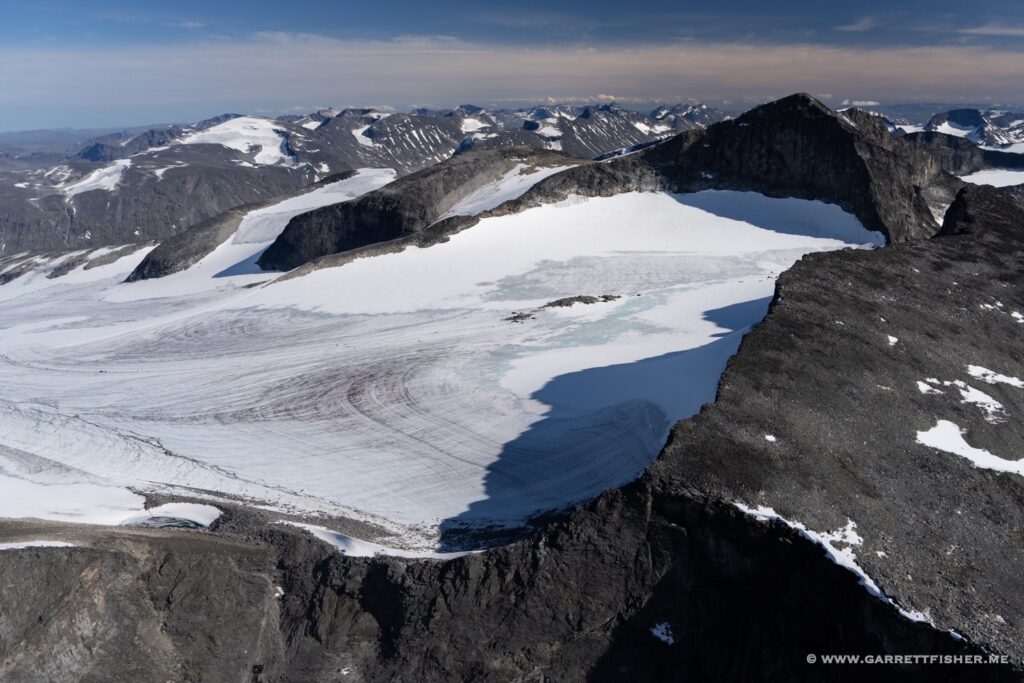 From the north. Styggebrean left with Storjuvbrean to the right. I must say that I do not mind a sea of rocks and ice with cold wind.