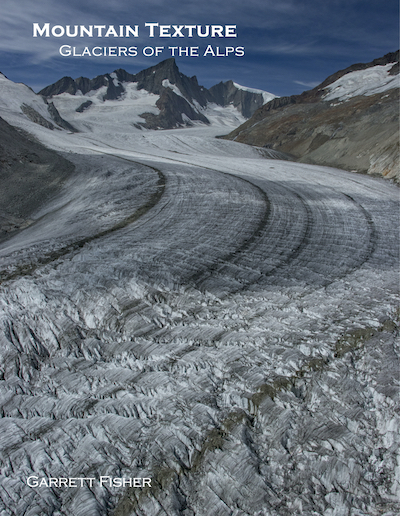 This one is the fourth in my “texture” series, where I narrow my focus to subjects that mostly lack a horizon and show some level of unexpected pattern. It is also interesting that its my most narrow subject in the texture line up, where I am selecting glacier surfaces in the Alps.

The coverage area includes Switzerland, Italy, and France, and contains quite a variety of activity on glaciers, ice caps, perennial snow fields, and their attendant moraines, tongues, and lakes. Glaciers are oddly dynamic in that they can move sometimes feet per day, with quite a variety of surface indications of what is happening below. Whether it’s the classic crevasse, avalanche activity, friction with mountainsides, the ubiquitous giant rock taking a ride down the glacier, or ribbons of rock and soil debris forming a “rings of Saturn” look to it, there is always something going on.

While this is texture specific, I do have a Bernese Alps Glacier book, of a scenic variety, in the pipeline.

One might ask why I would bother sending a blast announcing my book when our societies are collapsing, and I determined that there are certain advantages. First, many are stuck home with nothing else to do besides consume online-sold media and order things from Amazon. Second, for those who are suffering from a lack of toilet paper, any of my books poses a unique solution to this irrational yet ever present problem. Purchase the book, set it beside the toilet for reading, and as one consumes my illustrious writings, tear out the page and reserve it as a substitute for toilet paper. While it most certainly won’t have the softness of your normal brand, one could celebrate its exfoliating properties while lining my pockets with royalties.

Chronicles of Existential Dread: Volume XII: Life, Liberty, and the Pursuit of Dopamine

*As usual photos are at the bottom, despite the novella that accompanies them.

Since I was a teenager, it was evident that I had an attraction to deprivation as a form of pleasure, since I used to joke with my esoteric friends that our weekend juvenile outings were “Buddhist vacations.” We’d do something like climb a mountain without adequate camping gear (or food), spend the night freezing our asses off, descend in a stupor of deprivation, pull into a diner, binge out on coffee with steak and eggs, and be brought to the brink of orgasm by the sudden reversal from Soviet penal camp conditions to gastrological ecstasy. I thought the whole affair was a product of scholastic and employment repression and filed it away as one of the many silly things that filled my teen years.

As the intervening years have marched toward middle-aged malaise, I have had sporadic bursts of what I call “death marches,” which are random battle cries to attack some moderate-sized piece of terrain, climbing it in a flurry of sweat, gasping for breath, sore muscles, and a brief moment of standing on the summit wondering why I bothered. I assumed that the process was a proxy for flying, as I was merely “going high up except on foot instead of in the plane.”

In recent years living in the mountains (versus traveling to them in periodic ejaculations of motivation), I noted a very specific correlation: if the airplane is down for maintenance or its too windy to fly, I will go mountain climbing. Again, this drove the point home that I was chasing hypoxia in the easiest way available, so I thought it was perversely a form of laziness.

Recently, the airplane has been out of service, a fusion of Germans in Germany being bureaucratic fascists and coronavirus ruining everything. What has resulted in the ensuing weeks of no flying has been a seeming hormonally induced fury of hiking, which grew into mountain climbing. While one may think that my aforementioned rantings are merely being proven, there is more to the story.

If I go on a hike that matches my [ironically ever improving] level of physical fitness, I feel refreshed relatively analogous to the effort involved. Call it “forest bathing” if you must…an hour in the woods and some stresses of the workday evaporate for a while, before coming back. Now, enter in precipitous ridges that sneer at me while caring for quotidian concerns such as going to the post office, and I decide I must conquer these peaks.

What happens is that I spend most of time self-punishing, picking a fight with the sky. Huffing and puffing as I climb thousands of feet, sweating and straining my corporal functionality, I wonder why I am doing it. And I press on. There is a summit to be had, and I keep going. Eventually I get there, usually just before sunset. I take my obligatory photos, relish my 10 minutes on top, and then try not to twist an ankle scurrying down before it gets dark, now sweaty and spent.

Compared to my gentle “forest baths,” I feel euphoric…for hours despite most of the experience having been difficult.

Since I have been doing this to myself for weeks on end trying to avoid a seemingly inevitable slide into insanity due to not flying, it occurred to me that my flights in the mountains differ little from these death marches.

If I go flying for 20 minutes around the patch in the evening, I feel good. It’s the right thing to do, though two hours later, it no longer offsets other negatives in life. Compare that to an aeronautical death march. Long cross-country flights come to mind, usually in the cold or heat, where I shiver in misery all day, or if summer, sweat like a pig (there is no such thing as moderate temperatures for a cross country flight). Covered in oil, exhaust fumes, and sweat, sunburned, dehydrated, and tired after flying all day in haze…. I have nothing but post-coital satisfaction for hours, relishing my “achievement’ which, by many measures, is nothing but self-punishment.

What is even better is a full three-hour flight at 15,000 feet in the dead of winter, battling vicious wind. Lacking cockpit heat, I freeze myself to death, while engaging in a mental workout taking thousands of pictures, thankful each time the prop kept spinning. It usually takes hours to warm up after landing, inclusive of having my cerebral functions come back online. Again, I report hours of ecstasy afterward, even though most of the flight was spent getting to or from the destination in mind while in supreme discomfort, much like my terrestrial death marches.

Many pilots I have encountered marvel at my endless wellspring of motivation to self-flagellate in a Cub, picking repeated fights with the sky in a compendium of characteristics that seems designed to ensure a constant stream of difficulty. One would think I could fly low and slow over farm fields like every other Cub driver and, well, it seems that isn’t an option. Despite being an artist at heart, it seems that I cannot process beauty unless there is some literal monastic turmoil associated with it.

So, I guess nothing has changed since my juvenile camping forays, and I doubt much will change going forward.

As for the photos in question, it occurred to me that I haven’t shown a “normal” blog post that demonstrates the Alps on a sunny day in midwinter. These are from a few months ago.

Climbing out of the Oberland with a moderate snowpack. 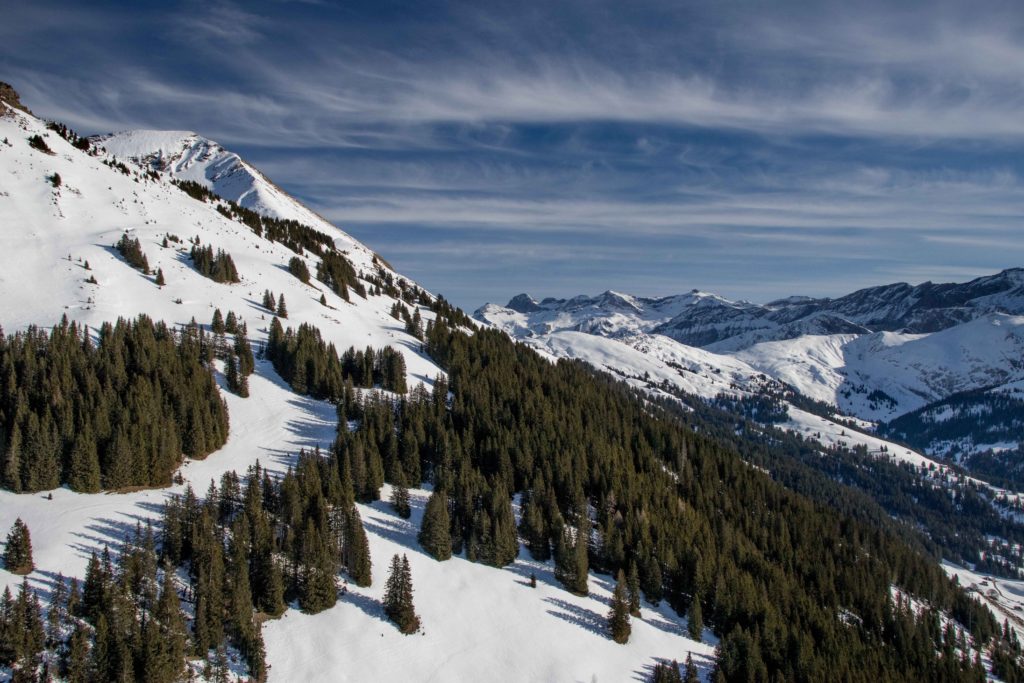 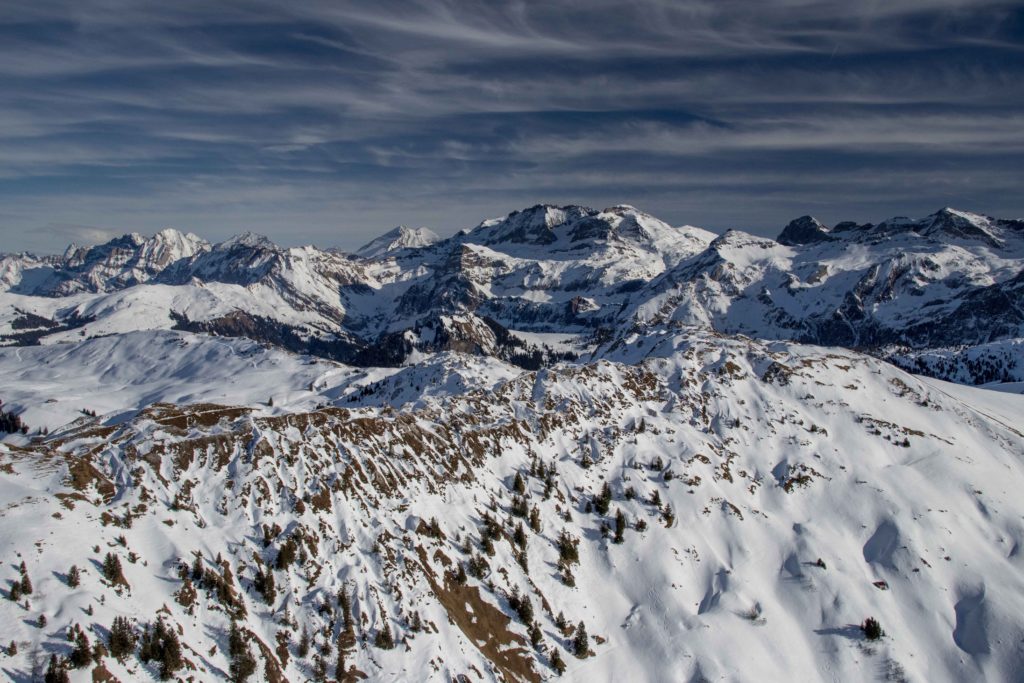 Hobärggletscher, with some big ass mountains behind it. One can understand why they are melting if so little snowpack is on them in winter. 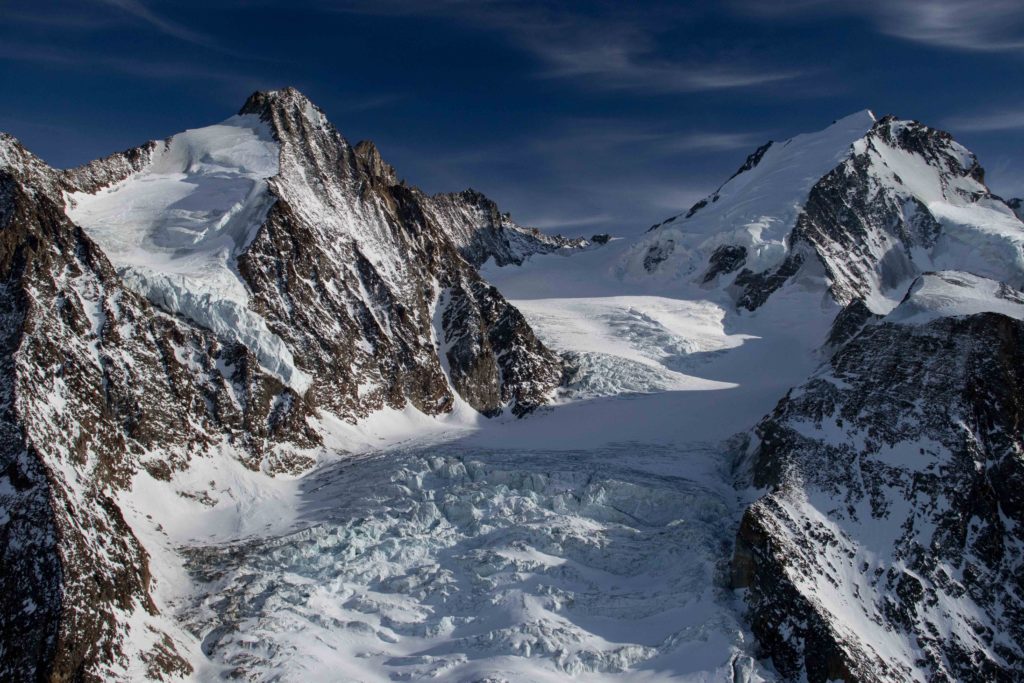 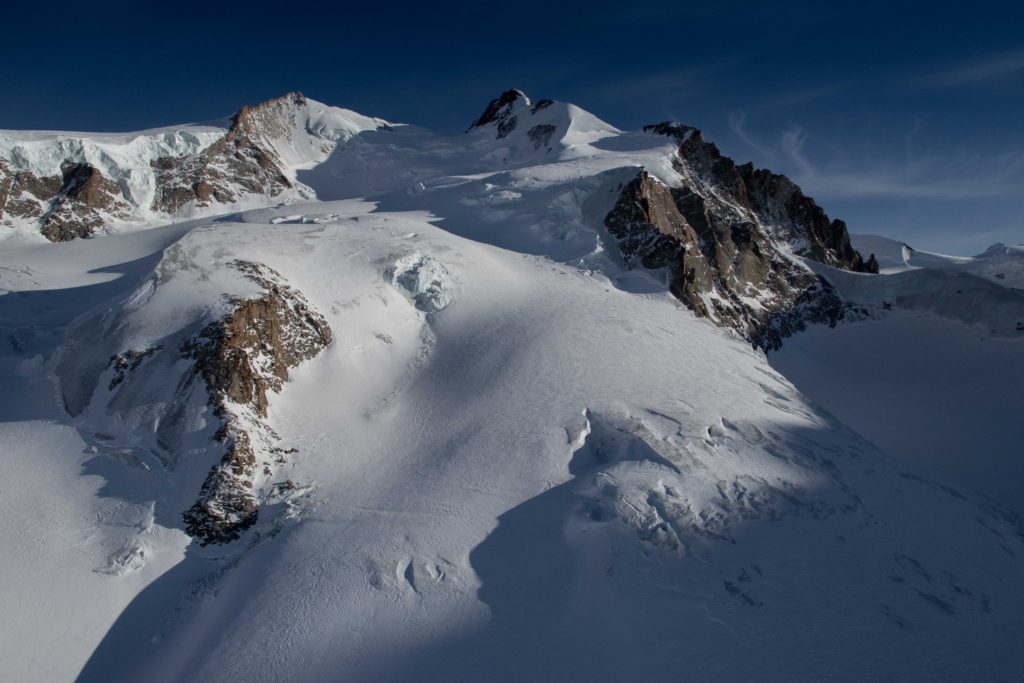 Parrotspitze in the “saddle,” among many other 4000m peaks.

Ridge with the “Breithorn” peaks (also over 4000m), with the Matterhorn in the rear right. If you’re quarantined at home, I might suggest my book on these peaks. 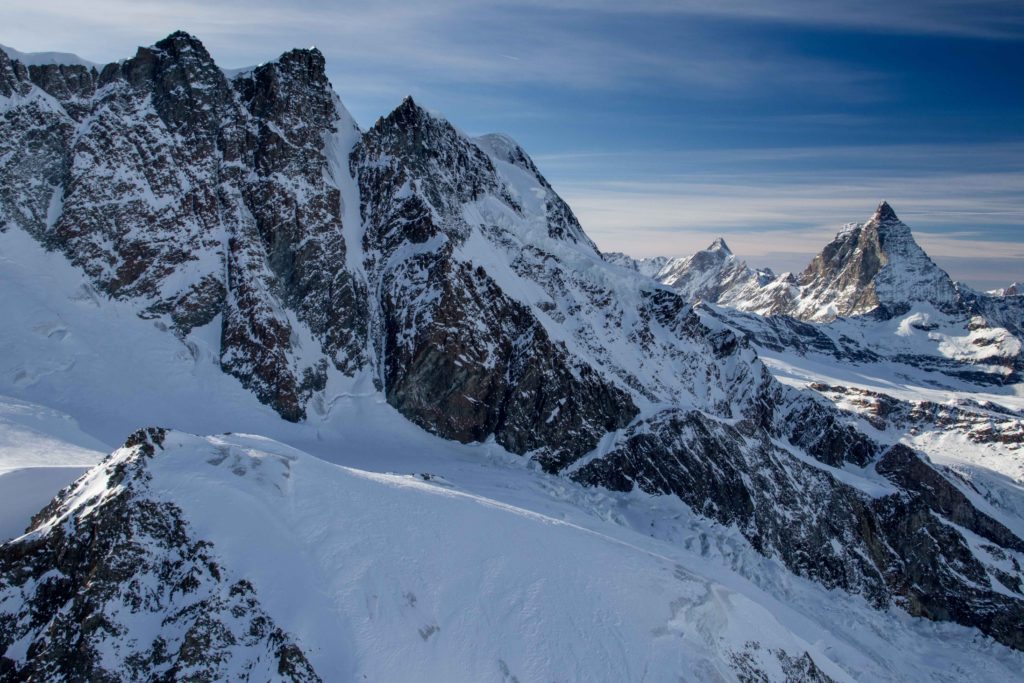 Glacier de Moiry in the Valais. 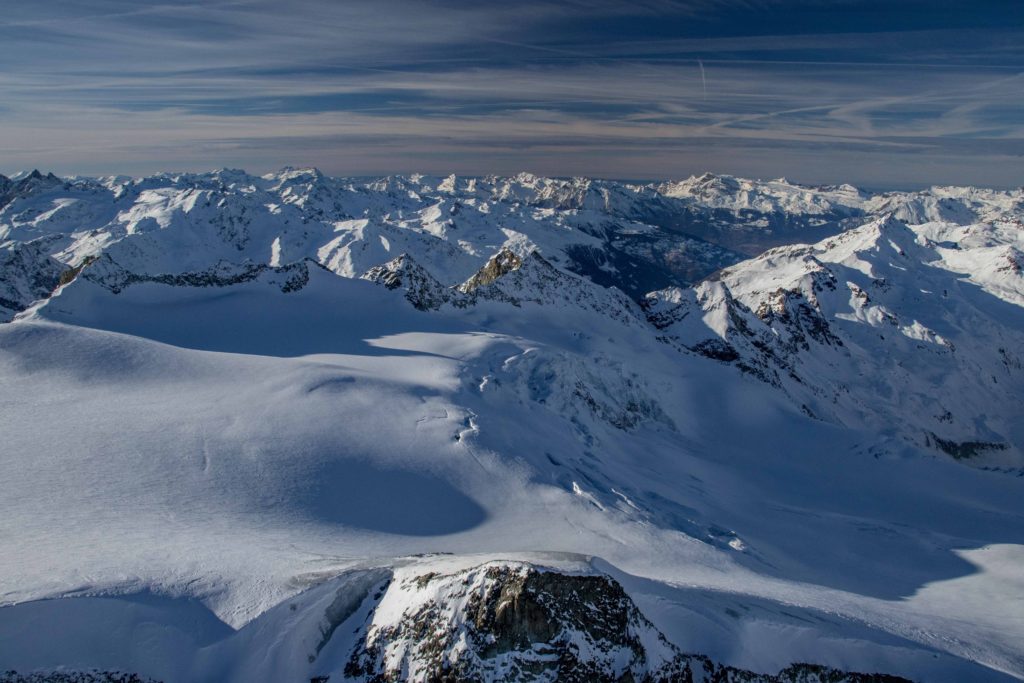 North of Col de Pillon….returning to the Oberland. Lake Geneva on the center horizon. 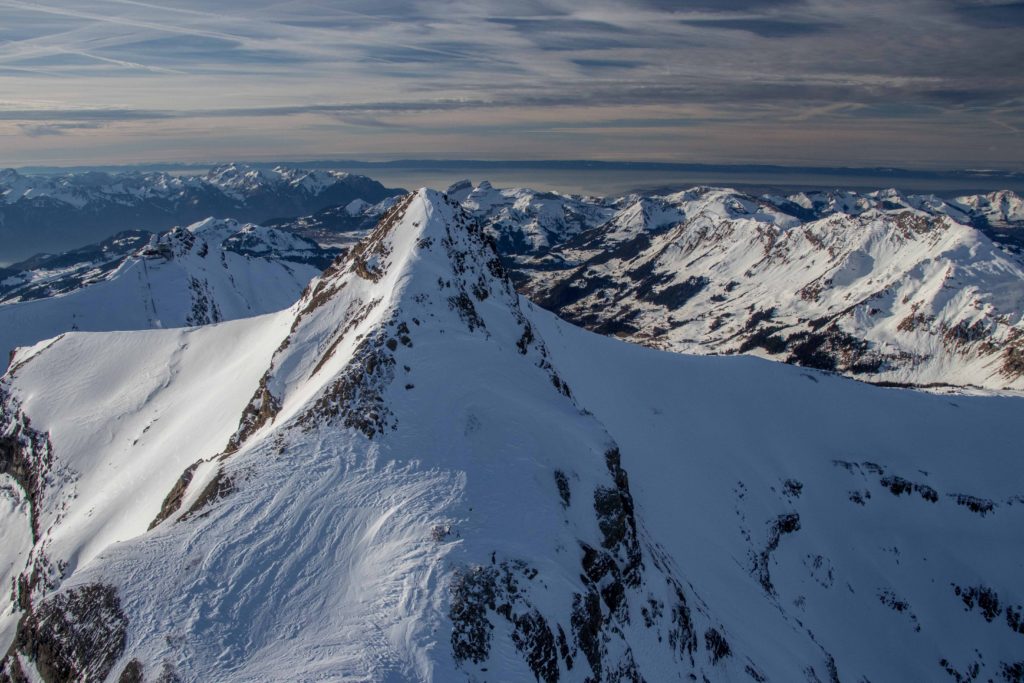 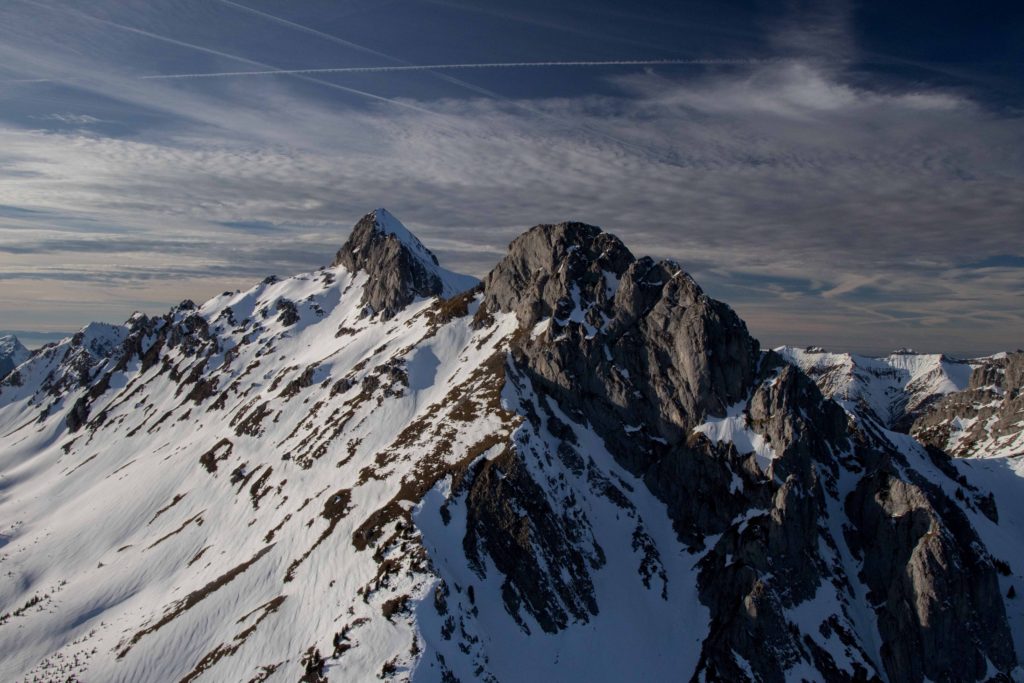