I didn’t come to Norway for the fjords, per se, though they go hand in hand with the existence and location of the glaciers. Where Ice Age glaciers were largest, meltwater channels and other such geologic activity drove the scouring of the depths of the valleys that later filled in with water from the ocean, becoming the fjords as they are. Some of them are thousands of feet deep, in effect an extension of the orography present above the ground.

Of all things, the Alps offer an above ground perspective of what the depths of a fjord might look like, as similar deep valleys are all above ground. One could even argue that such lakes as Lake Geneva, Vierwaldstättersee, Lake Constance, and the Italian Lake District are effectively fjords without connecting to the ocean. The difference pertains to the elevation of the plains abutting the mountains. In the Alps, it is above ground at the base, whereas Norway’s mountains terminate at the ocean.

In any case, the Sognefjord is the longest fjord in Norway. It is also the second longest in the world. Given its proximity to the base of operation, it was a regular feature of flights to and from the high terrain. My default cruising altitude when crossing the fjord was 5,500 feet above sea level, as I had to clear either a ridge, or the Fresvikbreen, a plateau glacier on the south side of the fjord. I was also frequently at 5,500’ to 6,500’ when wandering around the Jostedalsbreen and nearby glaciers.

It is unfortunate that I did not have a chance to fly the length of the fjord in an east-west direction. My crossings were in various places, at various times, mostly on a north-south axis. In any case, it is not a land flowing with milk, honey, and emergency landing locations. Much of it was rather severe, with a farm field or two that I regularly kept in mind, or just resigned myself to getting wet if the prop stopped spinning. I wore a lifejacket for virtually all flights.

Aurlandsfjord, an arm of the Sognefjord. Any other fjords mentioned from here on out are branches of the main one. 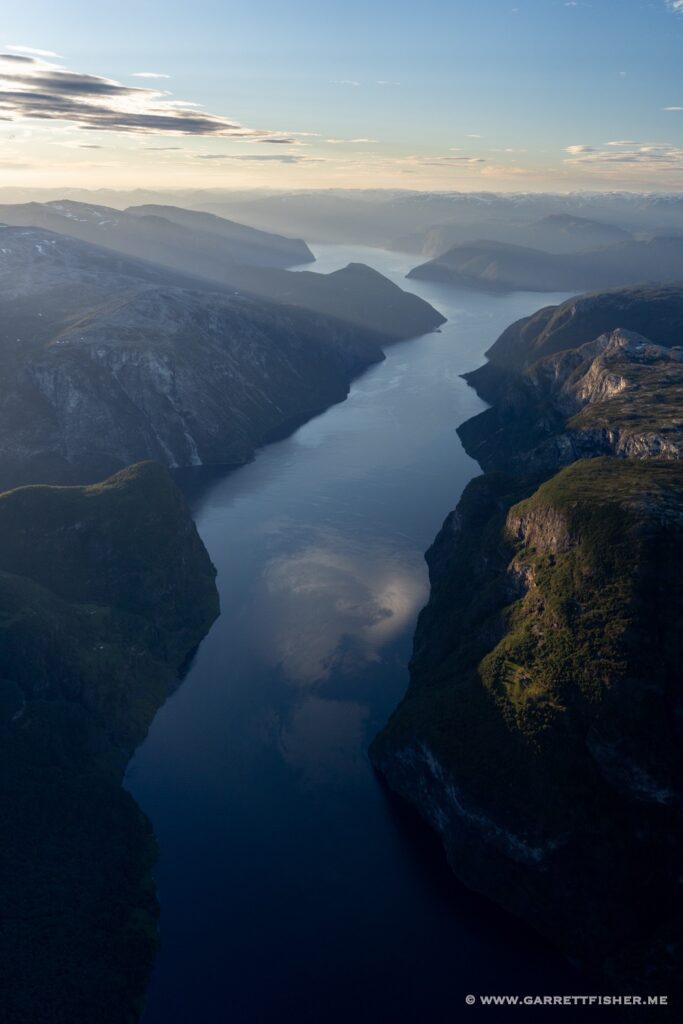 Fjærlandsfjord. Jostedalsbreen hiding in the clouds. 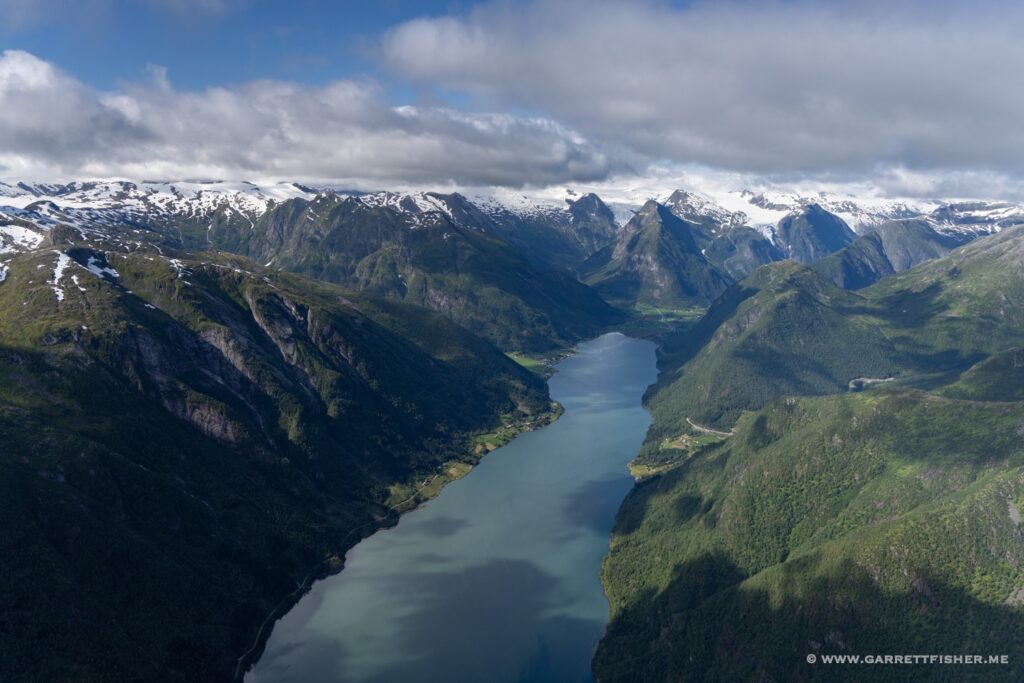 Nærøyfjord, from a mile above. 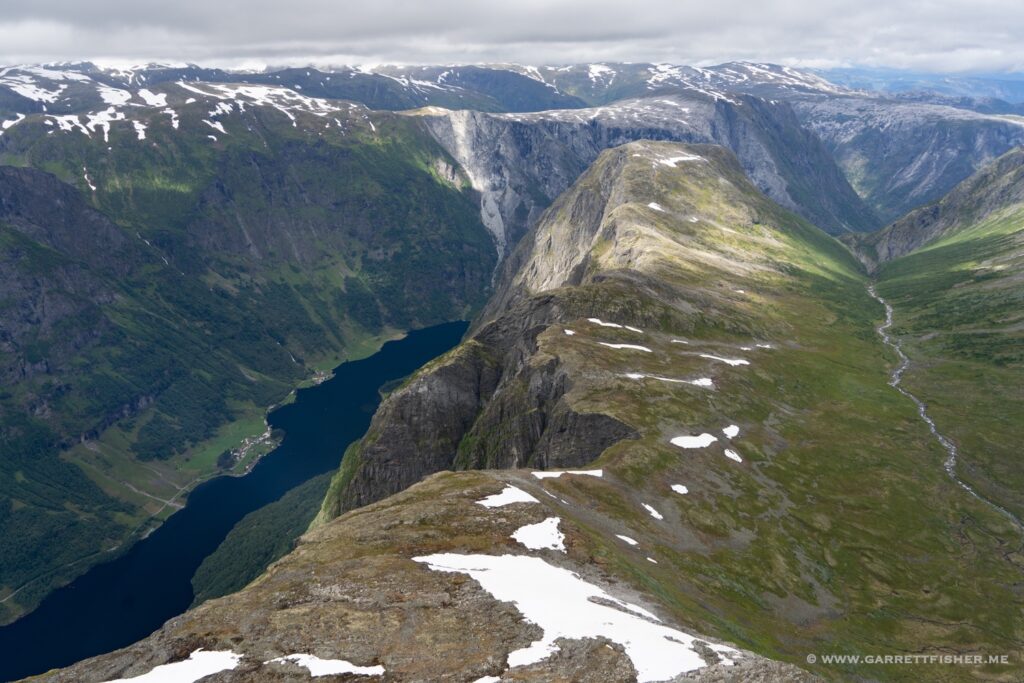 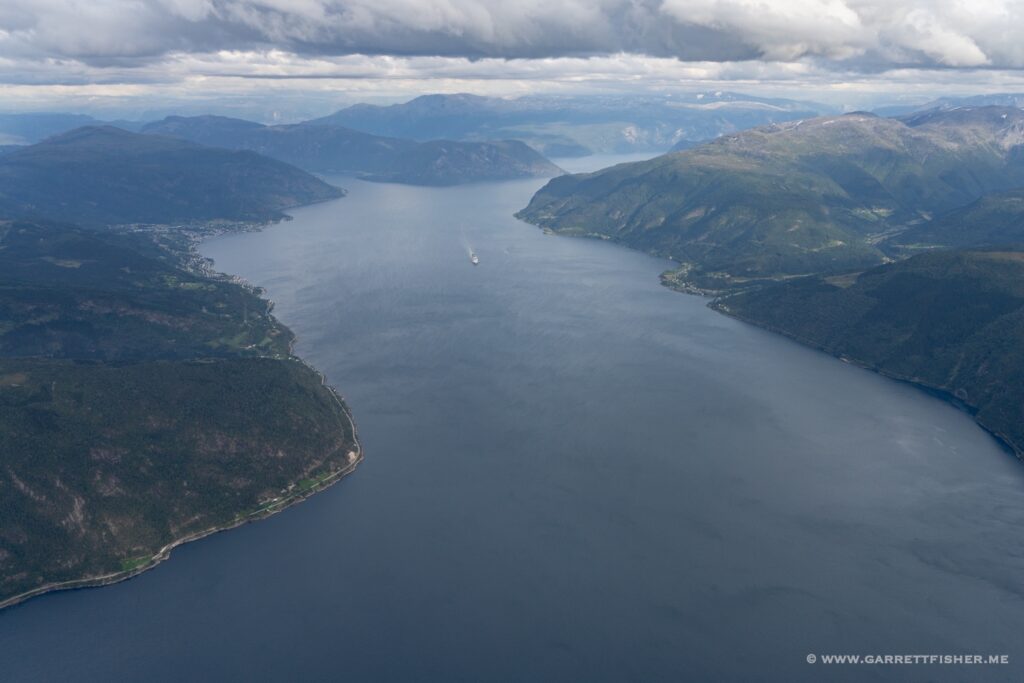 Westward view above Vikøyri, with a tad of rain. 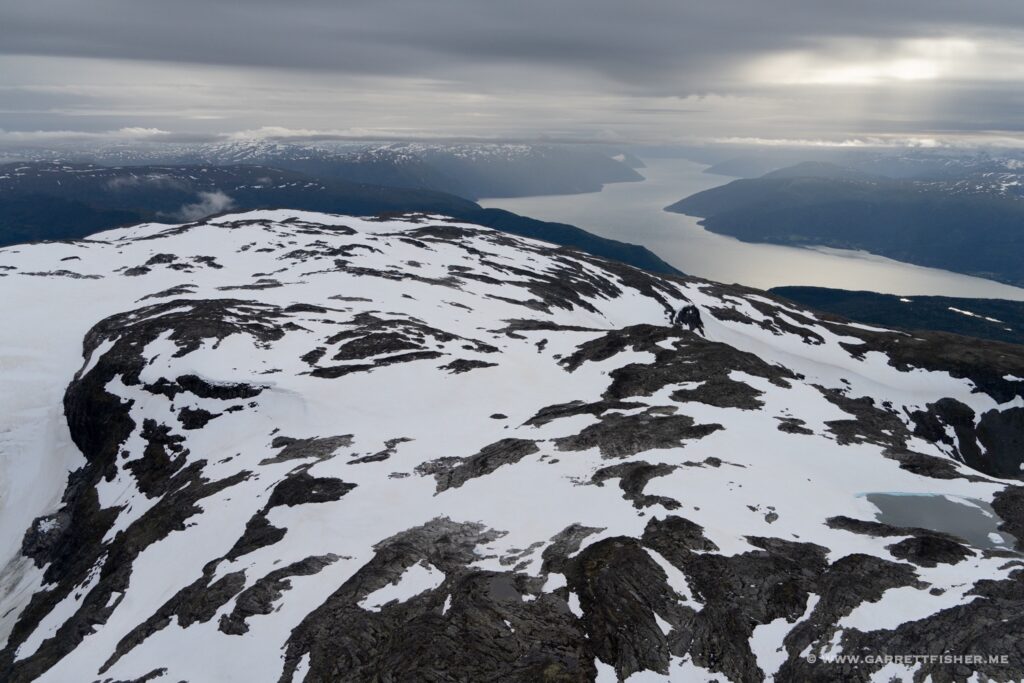 Aurlandsfjord again, from a mile above. 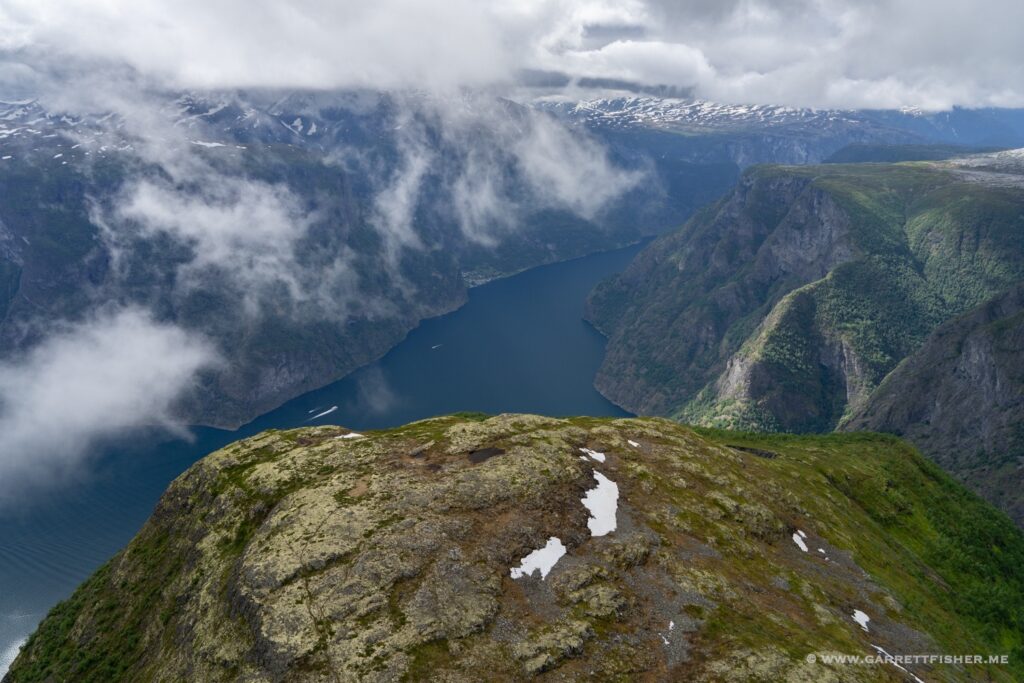 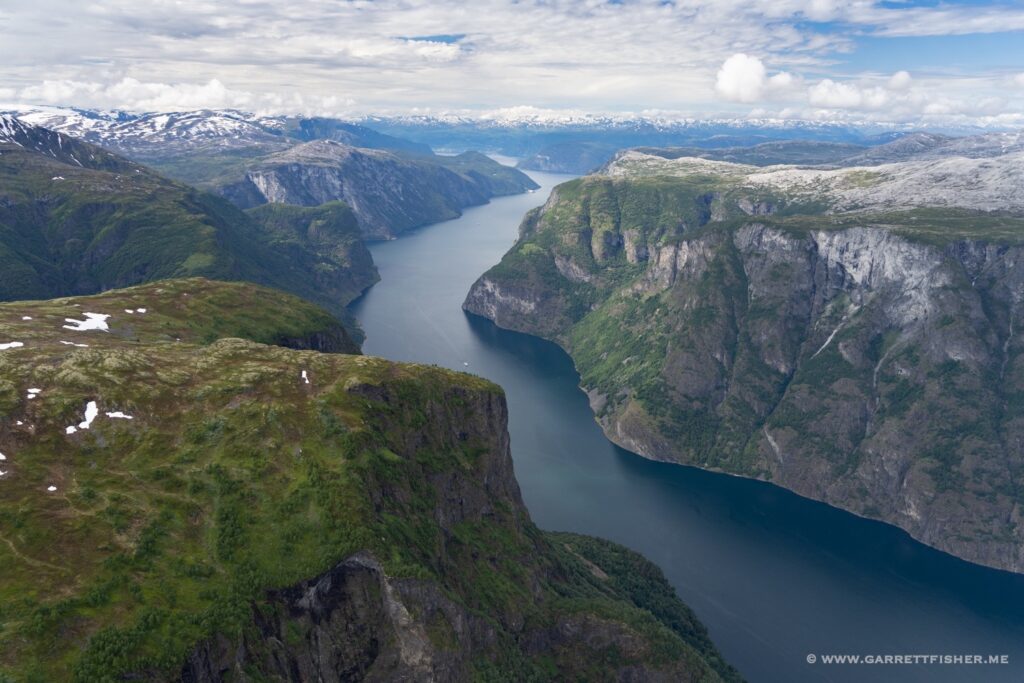 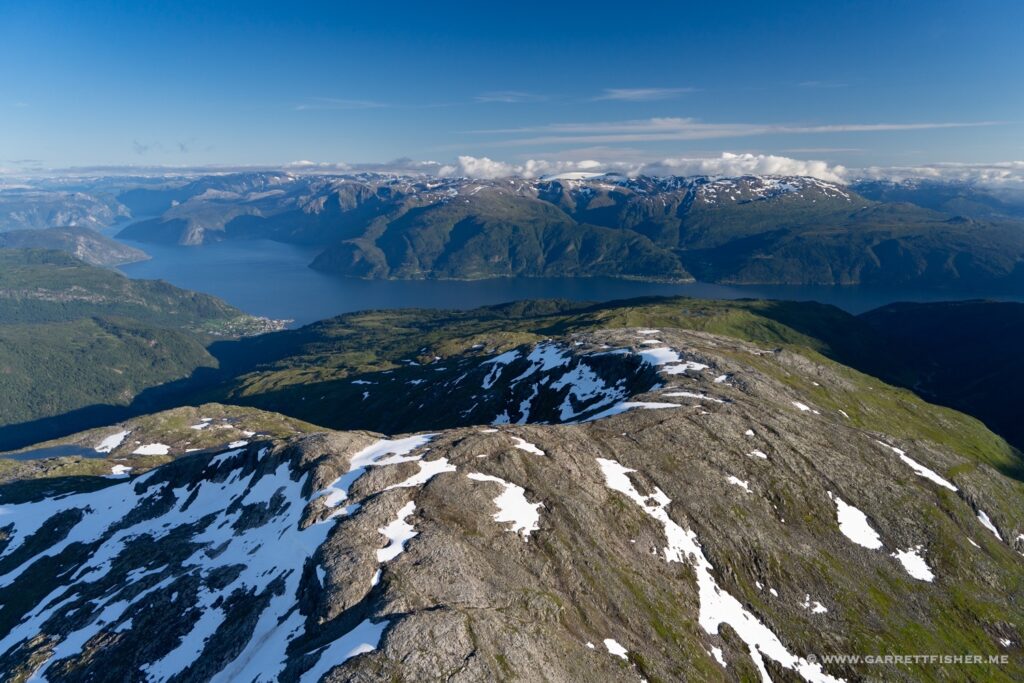 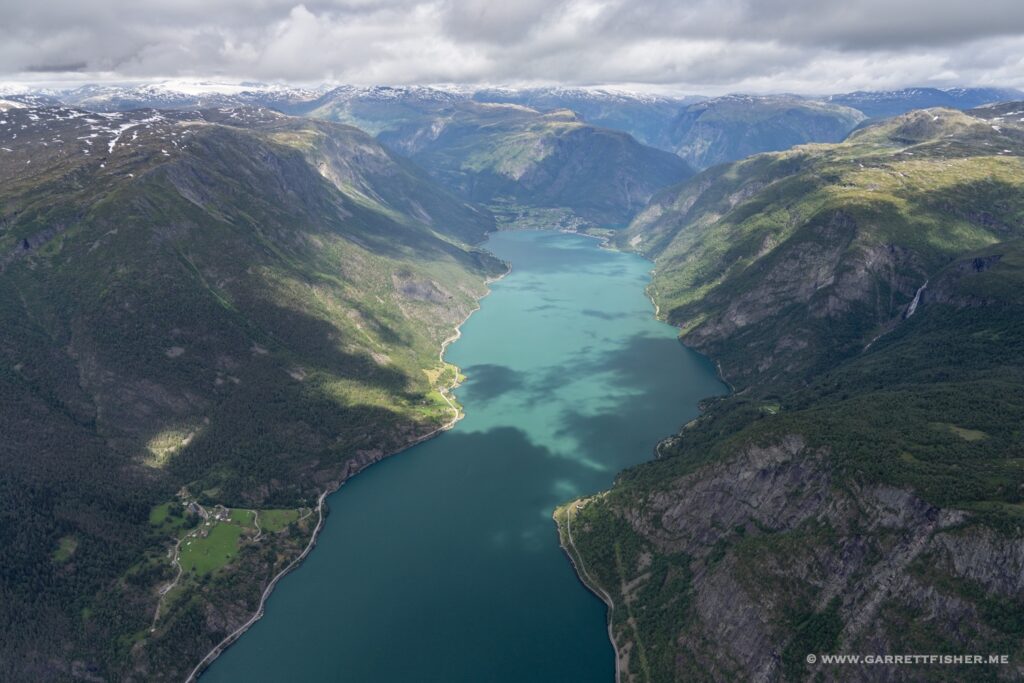 Convergence of Aurlandsfjord & Nærøyfjord. The emergency landing locations are delightful. 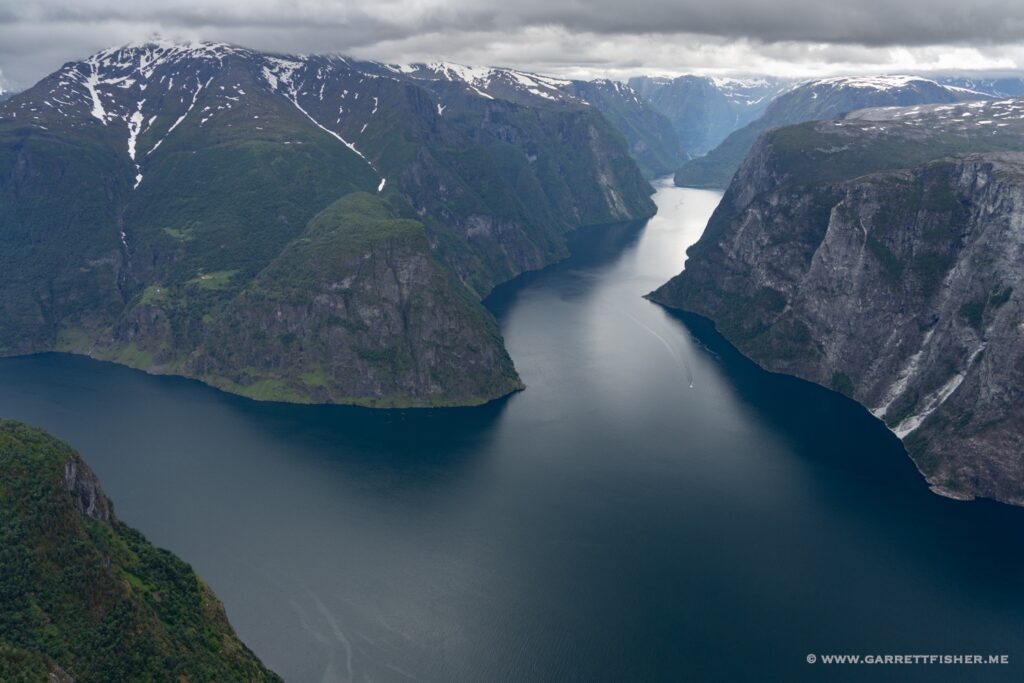 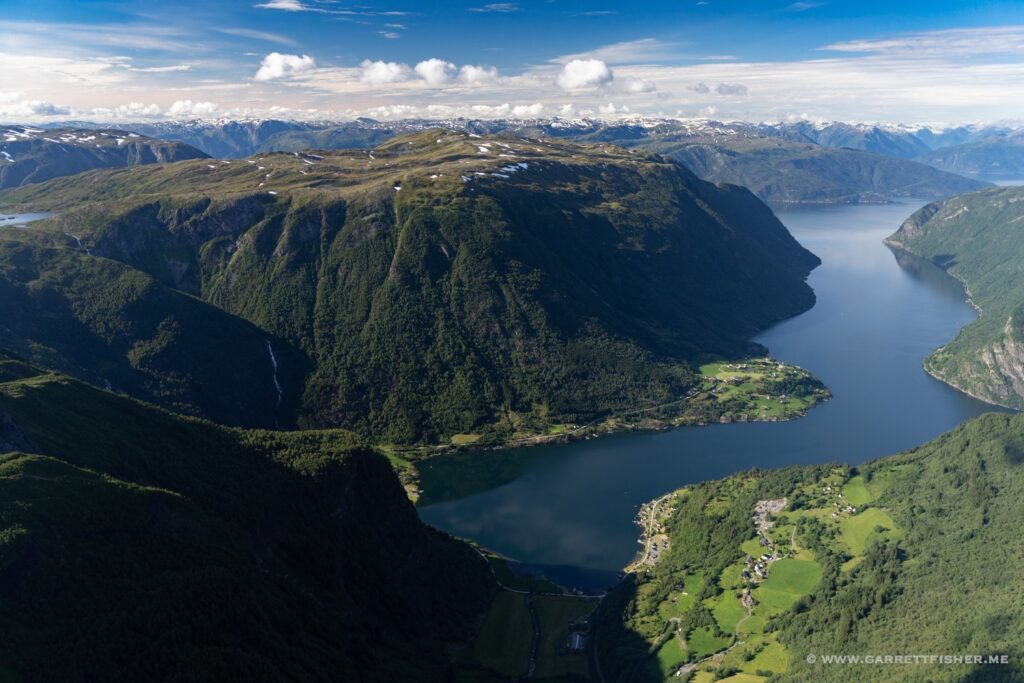 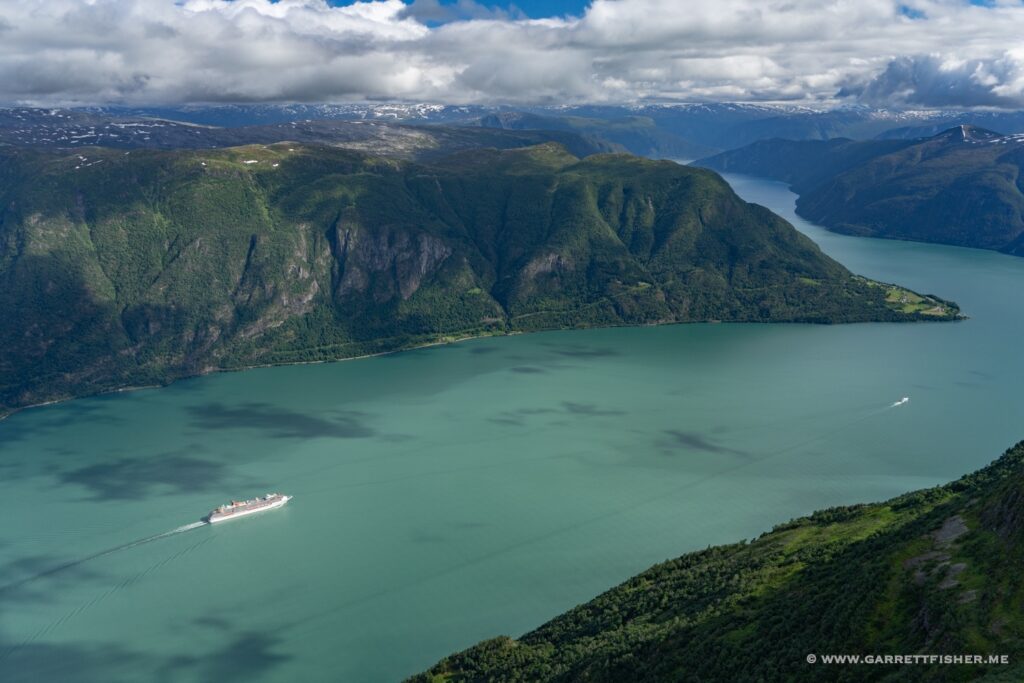 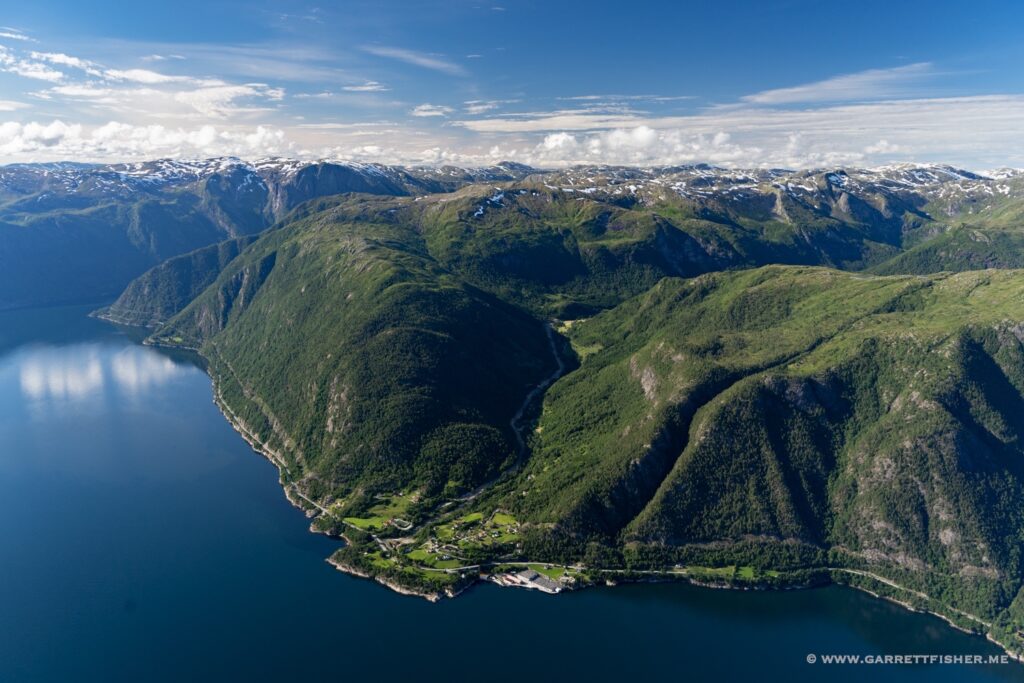 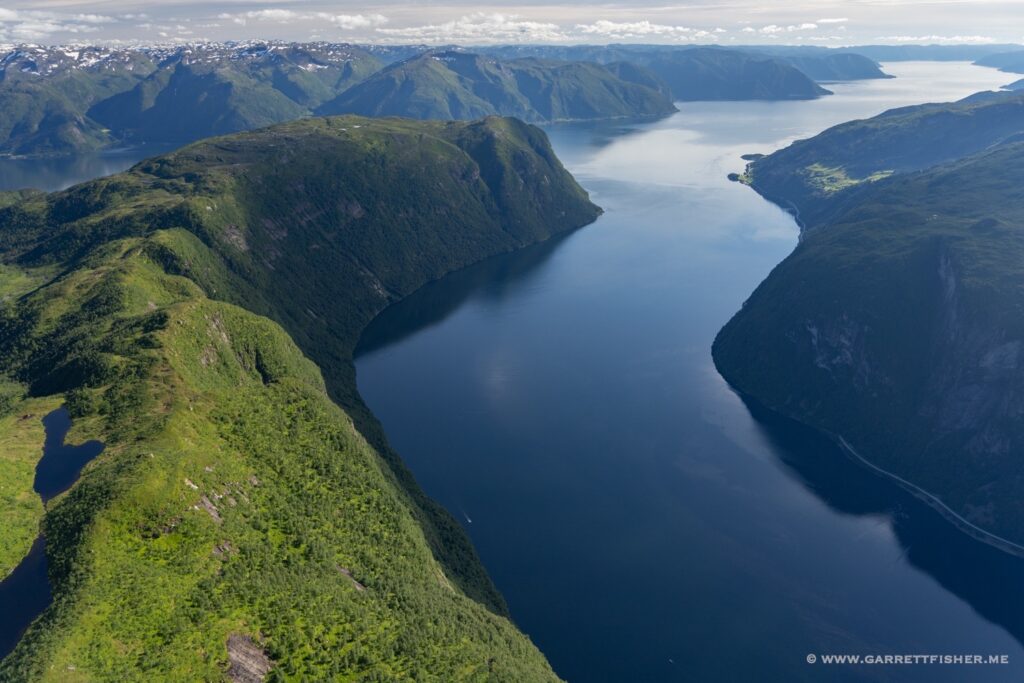 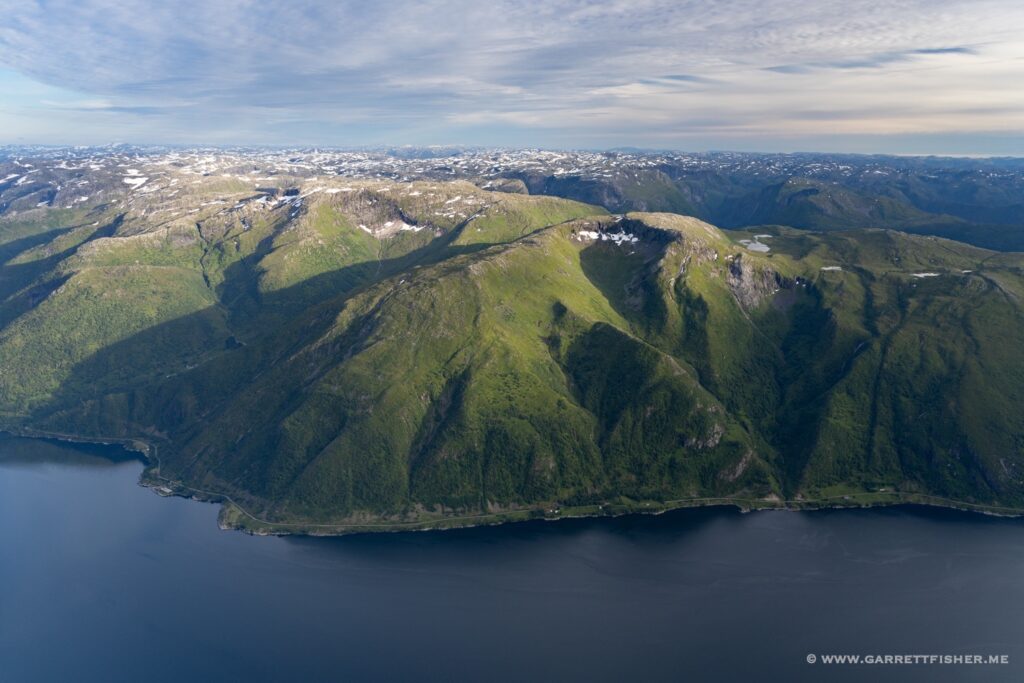 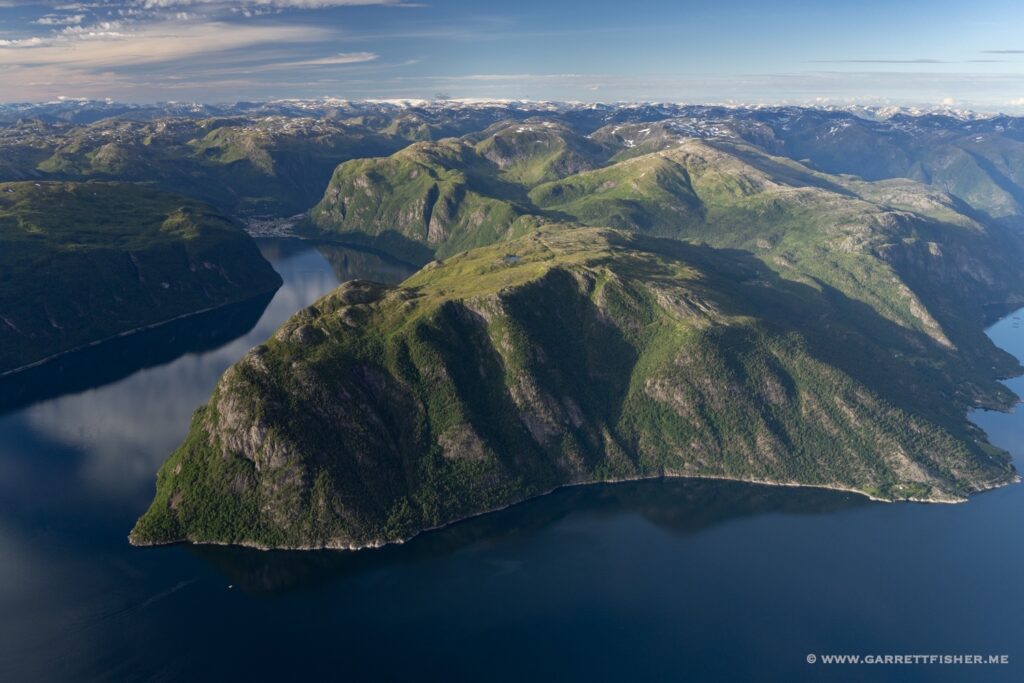 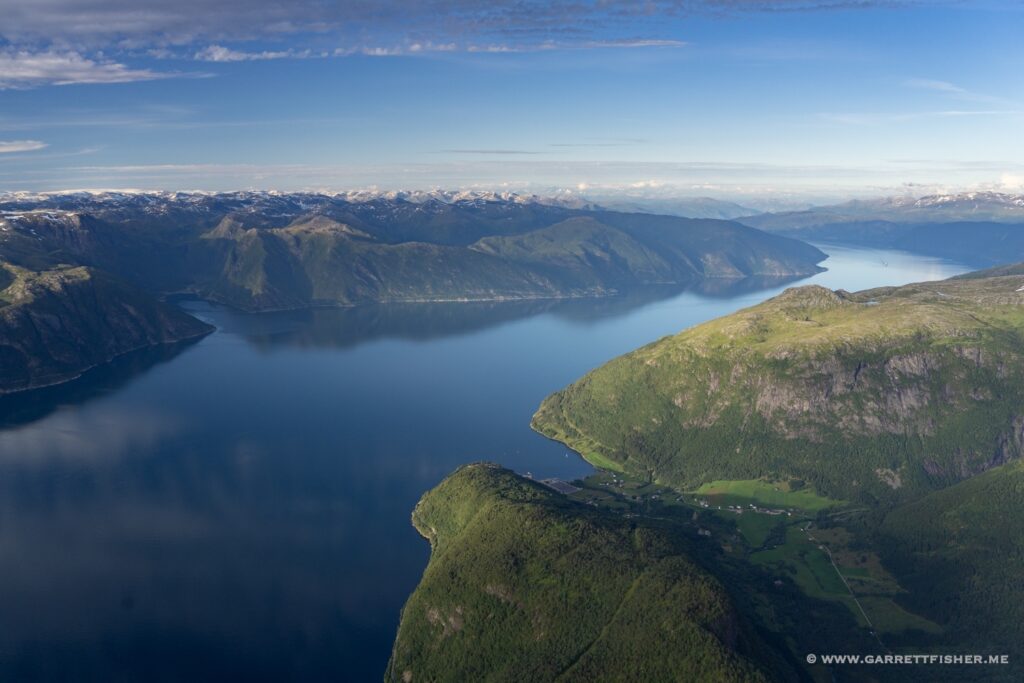