Sometime after arriving in Colorado in 2013, a small spark of desire to take black and white photographs materialized. I have to confess a rare influence by another photographer, Ansel Adams, as I was flying over much of the same iconic Western scenes for which his work is comprised. Mr. Adams and I share not only our preference for scenery in common. We also share our disdain for human influence in our images, as well as a penchant for slowing down and savoring the landscape. I quote Ansel Adams on the back of the book, where he refers to what is lost by taking in scenery using modern transport – it just goes by too quickly. While aerial photography does involve some speed, “low and slow” Cub flying is the closest one can get to a sense of early 20th century time and space, where things happen much slower.

At any rate, I had started a black and white project based on my wanderings around the US West and did not get around to finishing it. While that is a whole subject in itself, how many books are substantially completed and I change focus to something else, one day recently the spark that materialized in 2013 fired. I realized that the Alps are the ideal location for black and white images for many reasons. It requires a certain compositional dynamism (winter helps), which is abundant here, though I must confess that looking at the same mountain range without color demands an entirely altered paradigm. 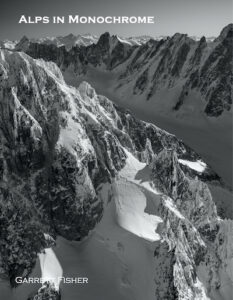