Sometimes owning an airplane completely sucks. The short story is that it breaks in its all too famous 1930s technology kind of way, which means over two months of not flying while spending one hundred hours or more getting covered in grease, wanting to hurl tools (but cannot as the hangar is too nice and expensive), spending prodigious sums of additional money, spending prodigious sums of normal expenses (hangar, insurance, everything else), and trying to tell oneself that this whole rotten mess is some sort of “learning experience” that will somehow make my life better. Then an equally cynical pilot friend says something like, “It’s an expensive hobby,” which rubs salt in the wound even though I should be smart enough not to whine about the consequences of my own choice to tell myself that I love this kind of thing.

Then it comes time for the test flight. Wisdom from respected mechanics (at least the ones that write manifestos in aviation magazines) note that “the most dangerous flight is one after maintenance has been performed.” Not all pilots get this idea, as the view is that, since a professional looked it over and touched something, it must somehow be better. The fact is that an aircraft engine is a delicate equilibrium of mechanical parts with not a shred of computerized diagnostics or management. To fix one thing upsets this equilibrium, which requires hours of operating the aircraft while observing engine characteristics, such as magneto drop, roughness, power output, mixture adjustment requirements, color of exhaust residue, oil temperature, oil pressure, and the like. Or, we could just call it what it really is and bring in the witch doctor to do a voodoo ritual on it.

The single thing I am most neurotic about is if the engine will still run. I do not really fear loss of control, weather, windy landings, getting lost, and a host of other things that can go wrong, as those can be mitigated (or avoided) if one’s brain is operating. When the engine quits, there is a glide ratio measured against altitude and available earth (or water) below, and that is that.

After a few innocent yet potentially dangerous maintenance affairs (where something was caught before flying), I made a personal rule to require a test flight around the pattern, even in the event of an oil change. The idea is to land, check for leaks, and if more work was done, allow for an overnight cooldown cycle to check torque and allow the engine to communicate if something is amiss. The purpose is to isolate changes in this supernatural equilibrium under the cowling and increase safety.

Since this flight involved a cylinder change, I also really needed to run it hard to facilitate break in, so I decided to do climbing circles above the airport to be rather high up and fly around for an hour, the entire time in glide range of the airport. While I thought I would head up to 7,000 feet or so, I realized how much I had “missed breathing in the non-existent air” and I climbed to 11,500 feet, just to freeze in my shorts, while also seeing Mt. Blanc above the puffy clouds and increasing the radius for which I could glide to the field.

That exposed an interesting artistic paradigm, where I have never seen this area from this high up. Due to routines, habit, flight configuration, and fuel efficiency, there has never been a reason to fly two miles above the airport. I am usually beginning a descent from the glacier levels about 10 to 15 miles out, entering the foothills at summit level, working my way down to coordinated and visually efficient entry to the pattern, having enjoyed the mountains up close the entire way down.

I expected the view to be defiled with haze. I forgot something that I figured out in Wyoming. During summer, when haze is usually worse, midday light is a good time to cut most of it out of the image, if one wants a wide-angle landscape shot. Between midday light and midsummer solar angles, lighting and contrast can be quite special. To my surprise, it worked very well from two miles above.

The second flight, the next day, had more haze and was taken traditionally in the evening, which is my favorite repose of gentler light tones. It occurred to me that I usually would have thrown a bitch fit over the haze, except I figured out how to both mitigate it and embrace it to add some depth and mystique to the image. In any case, I suppose even a basic test flight where one loses his aeronautical virginity again can expose new artistic frontiers. And, like a mother in the process of birthing a child, snarling in rage at the man that “did this to her,” when the panting and heavy breathing is over, she cradles the child in a state of oxytocin-induced euphoria. When flying in circles, freezing cold two miles above the airport, wondering if the engine was going to explode, I forgot about the exsanguination of cash and marinated in a Zenlike bliss, happy as a lark. 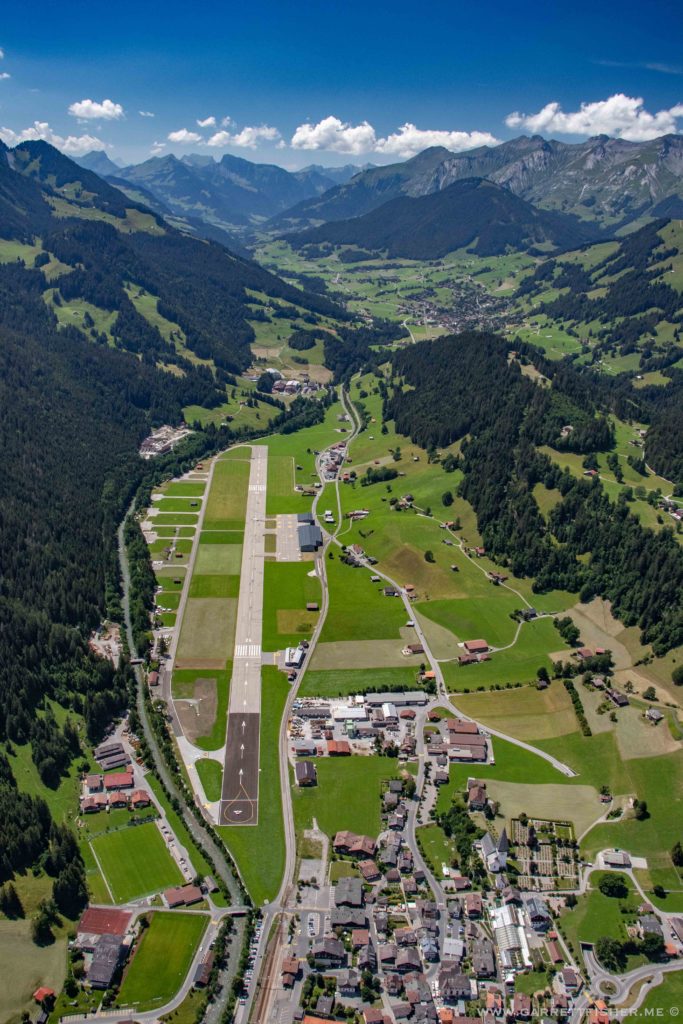 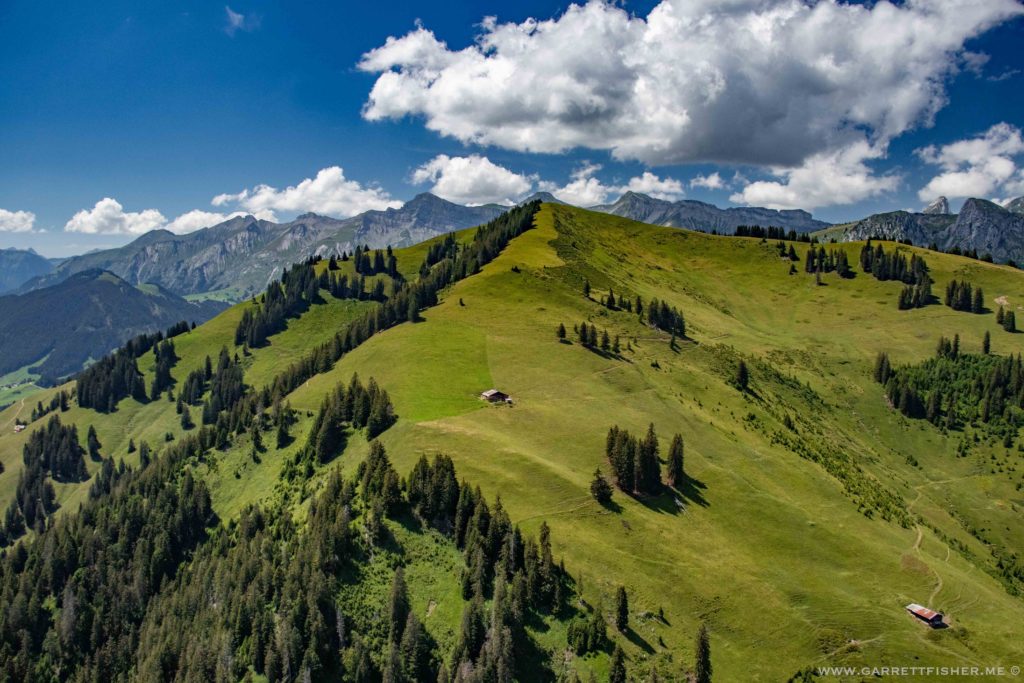 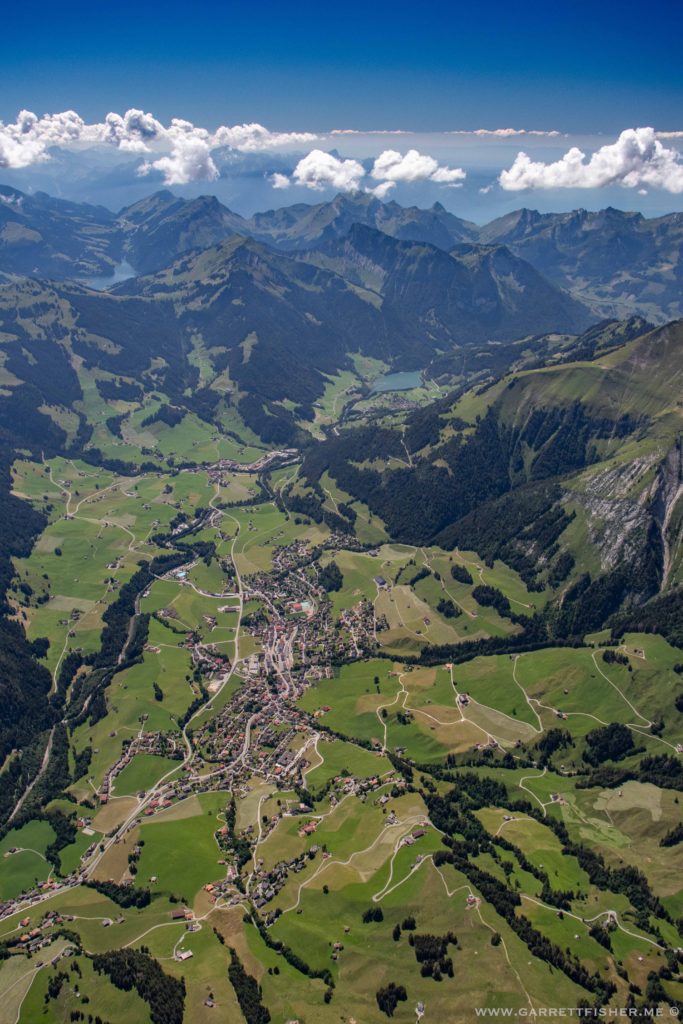 Exchanging a greeting with Mt. Blanc.

Since I was so ridiculously high, I could fly to Lenk-Simmental, as when I left the glide range of Gstaad Airport, I was in glide range to Sankt Stephan. 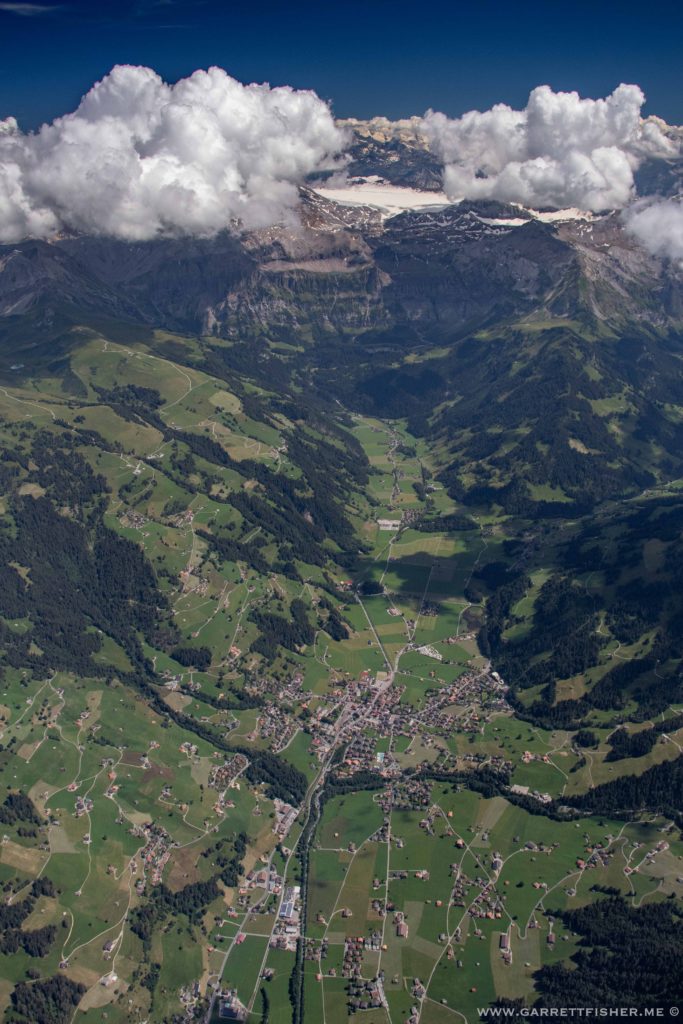 Hills behind Château-d’Oex, with the Swiss Plateau and Jura Mountains behind. Those hills have summits of 7,000 to 8,000 feet. I climbed one once in an act of philosophical futility. 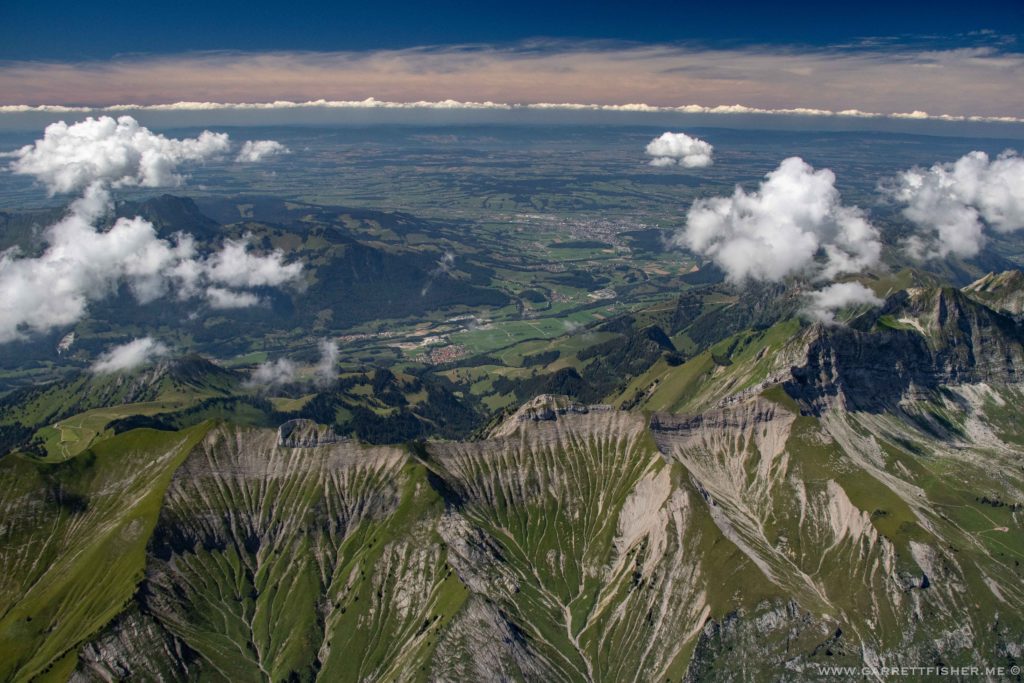 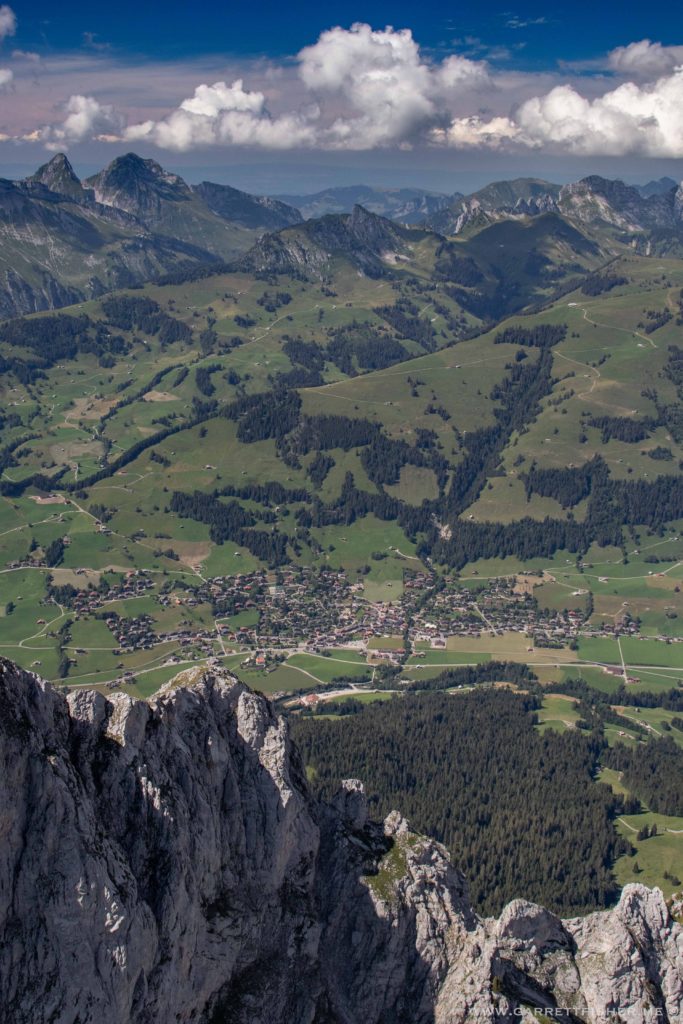 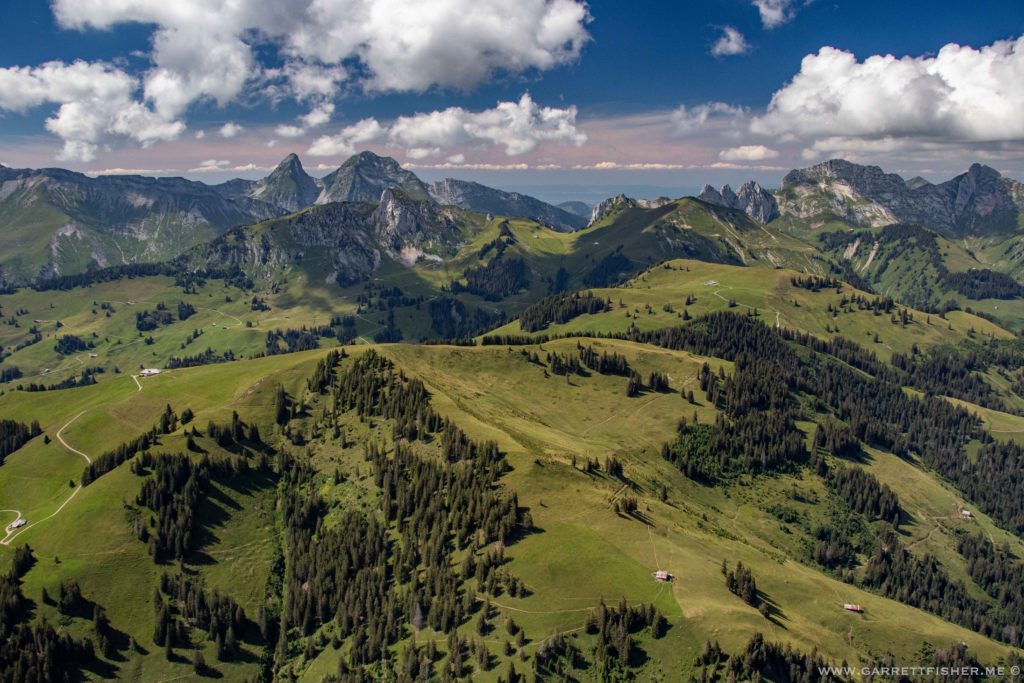 Gstaad Airport from one mile above. The standard circuit involves skimming the left edge of the pine clad hill. 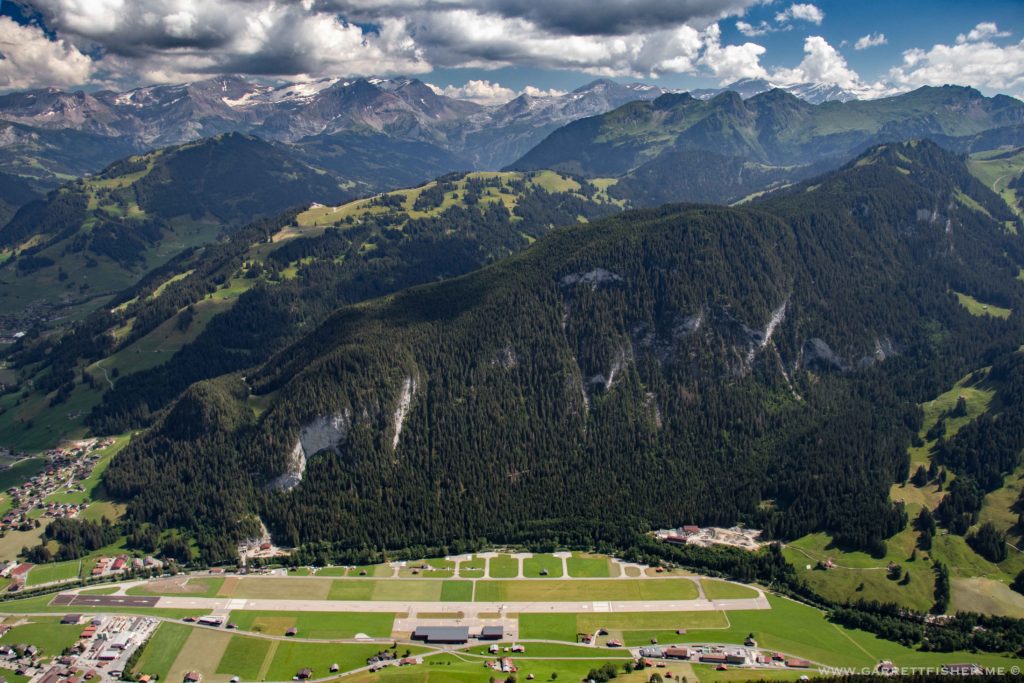 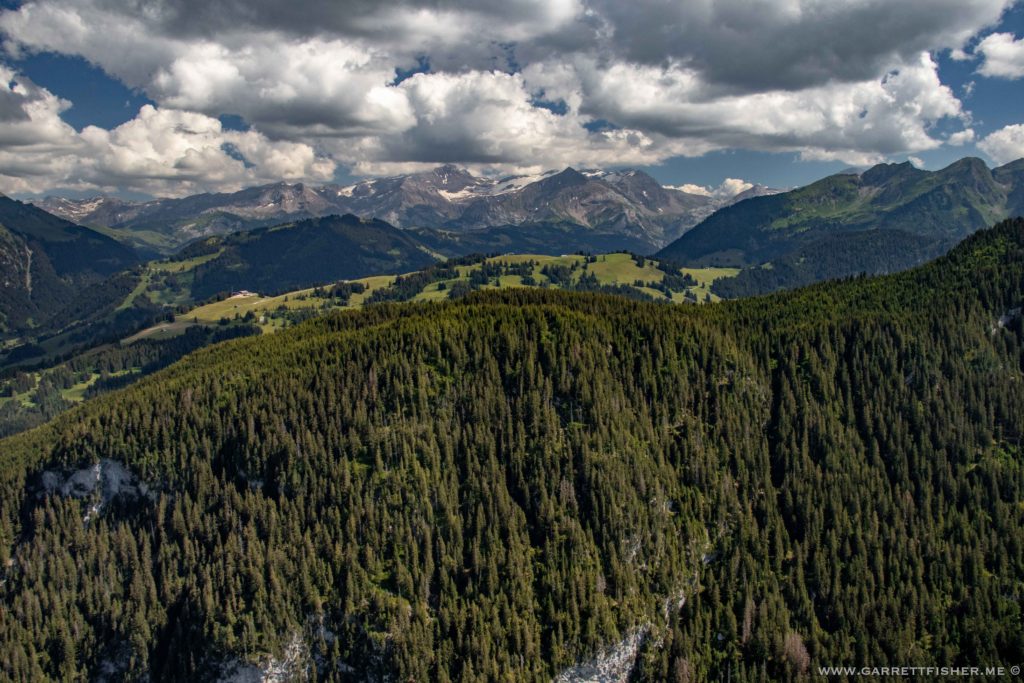 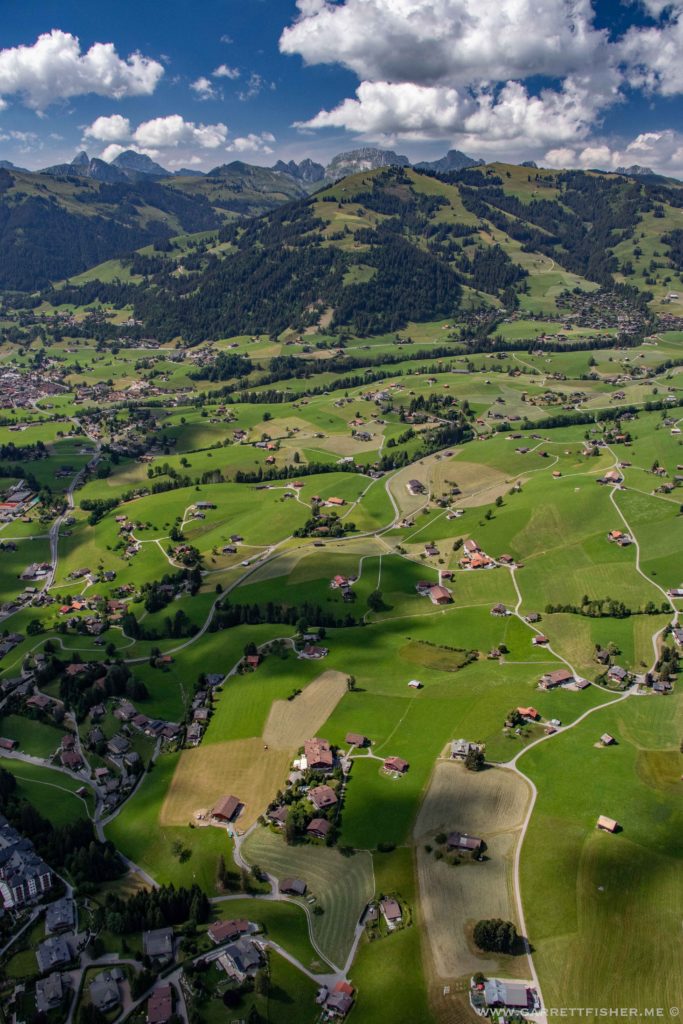 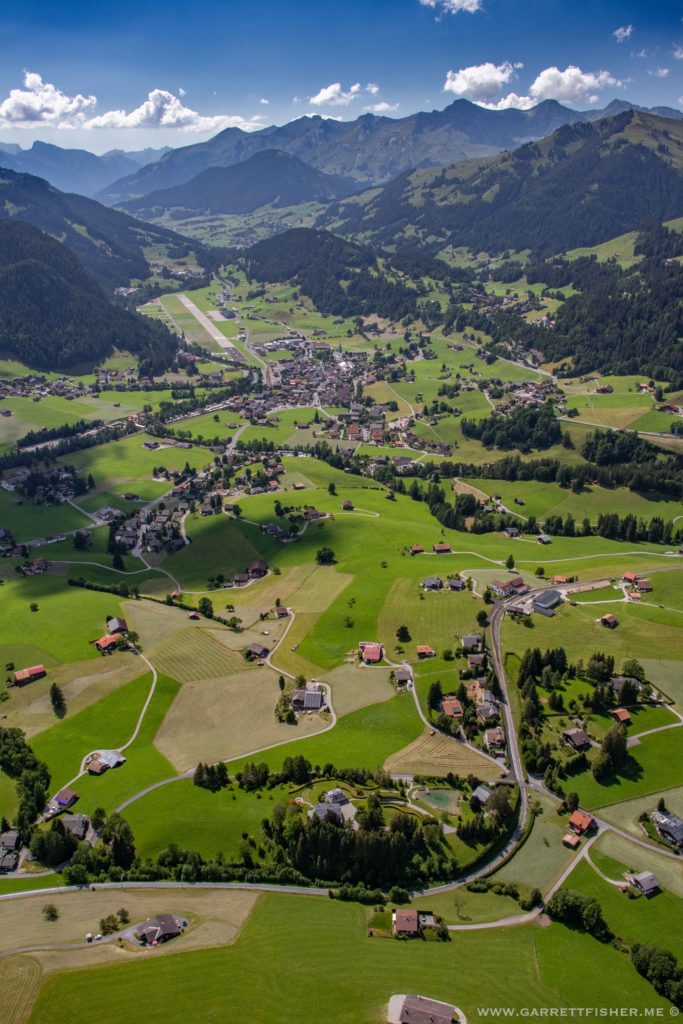 Next flight. This forest is on early climb out, named “Les Arses.” “Arse” is British for ass. I suppose it would demonstrate some sophistication if I mentioned that the forest is a microclimate where unusually hardened pines grow rather straight, making excellent wood that results in the fabrication of musical instruments. I like talking about the etymology of asses more. 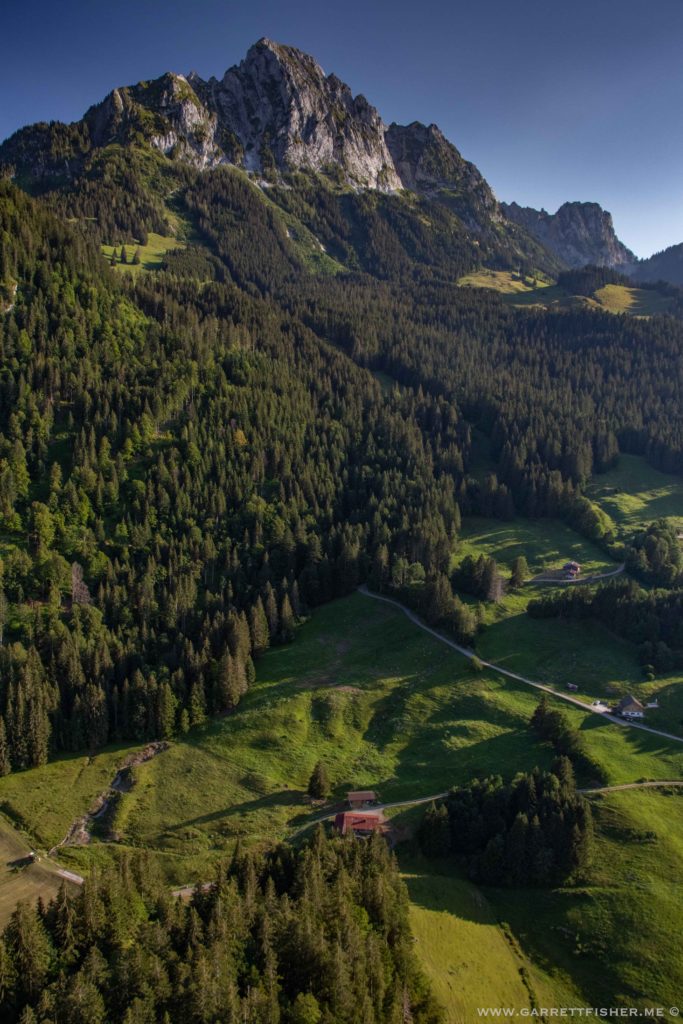 Behind Rougemont. I must confess that I surprise myself with image quality.

A tad west of Les Diablerets, with Mt. Blanc on the horizon. 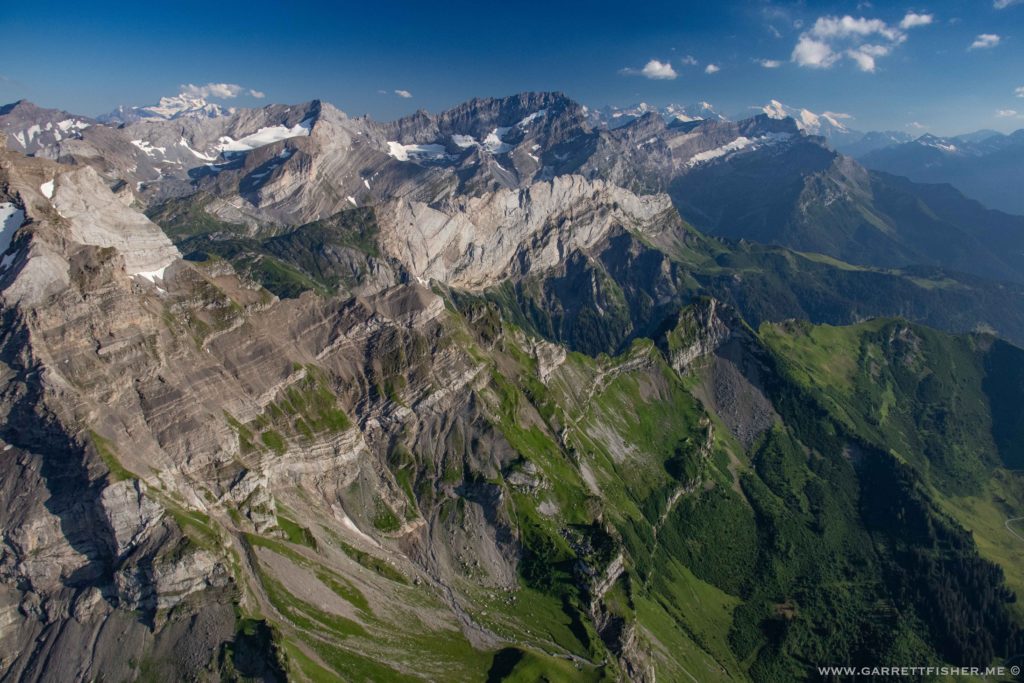 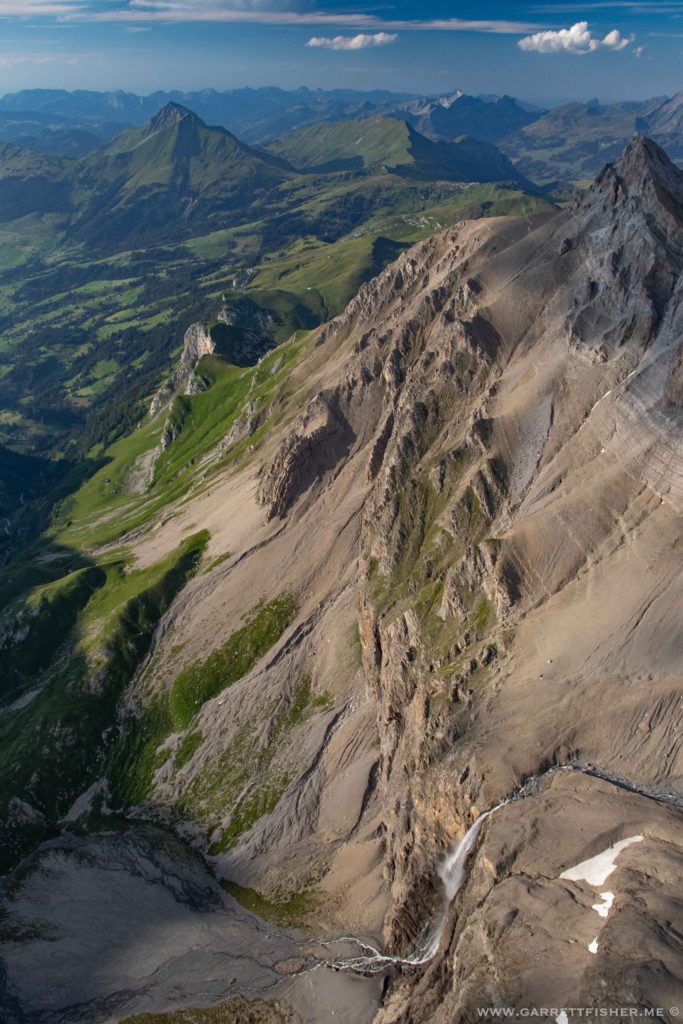 While it looks like a “Bob Ross cabin,” it is actually a lift station for Swiss farmers to transit goods up and down. I have seen in other installations that basically a cart is moved up and down. I have yet to see hillbillies riding on the cart as it is probably verboten. 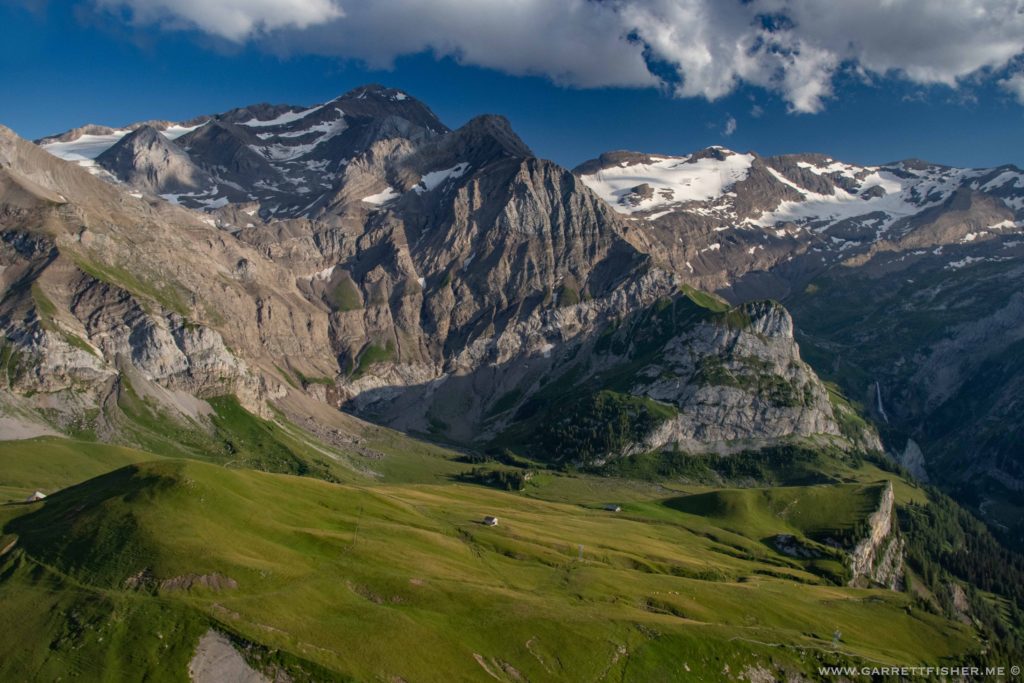 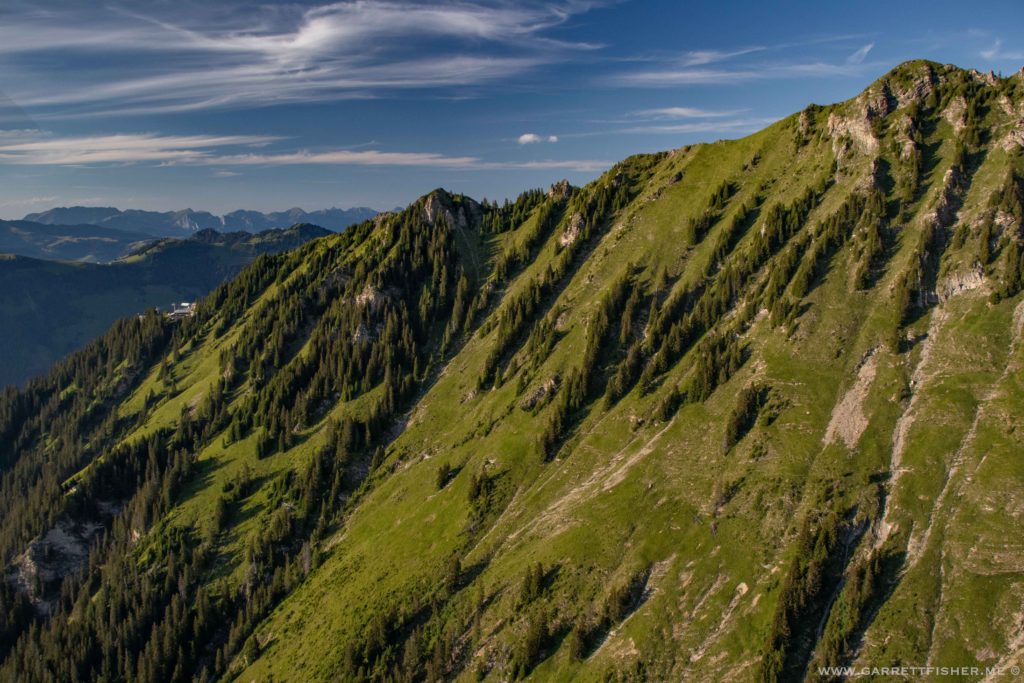 An extraordinary rendition of Saanen. 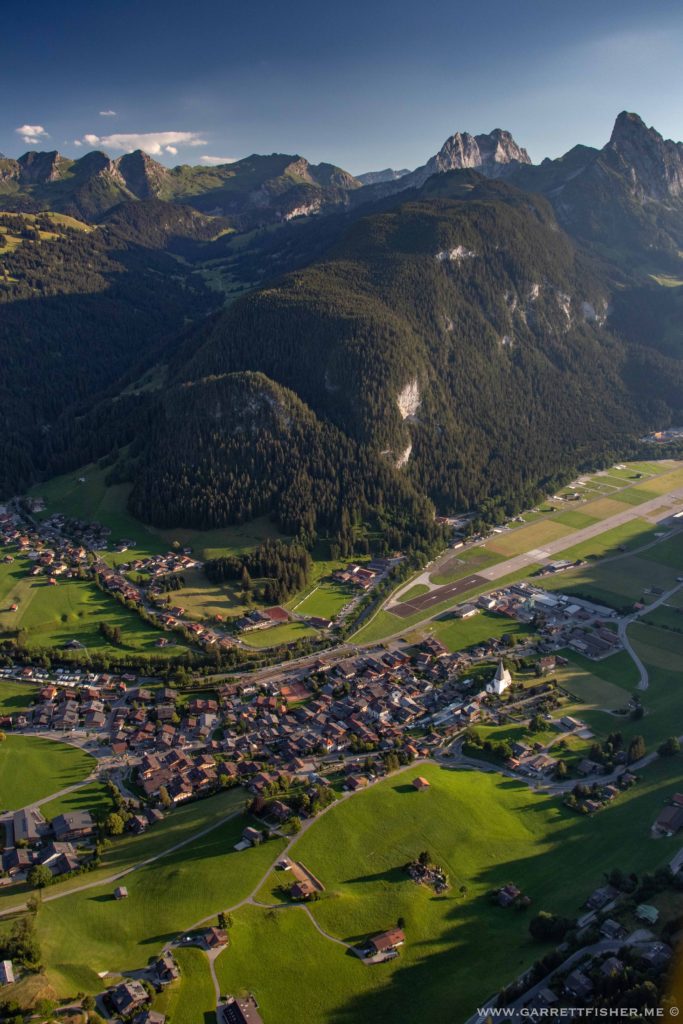 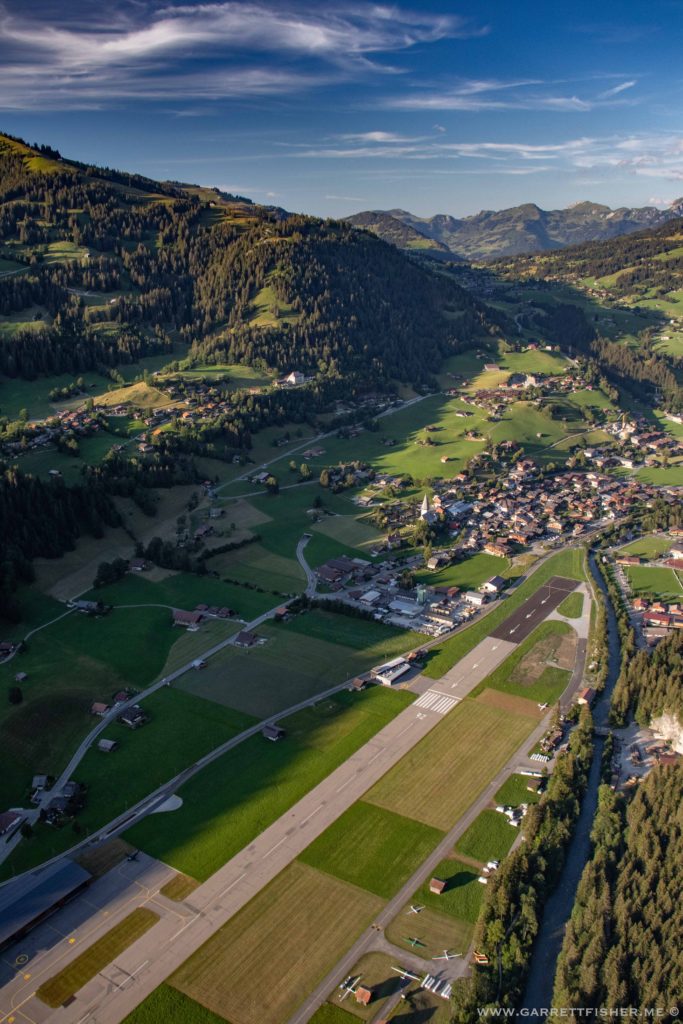 Turning final. Note “1867” on the roof of the building below. It is the specified place to turn base-to-final, so I know if I am ever caught in fog, the roof will point the way to the airport (or to the side of a hill, but I digress). 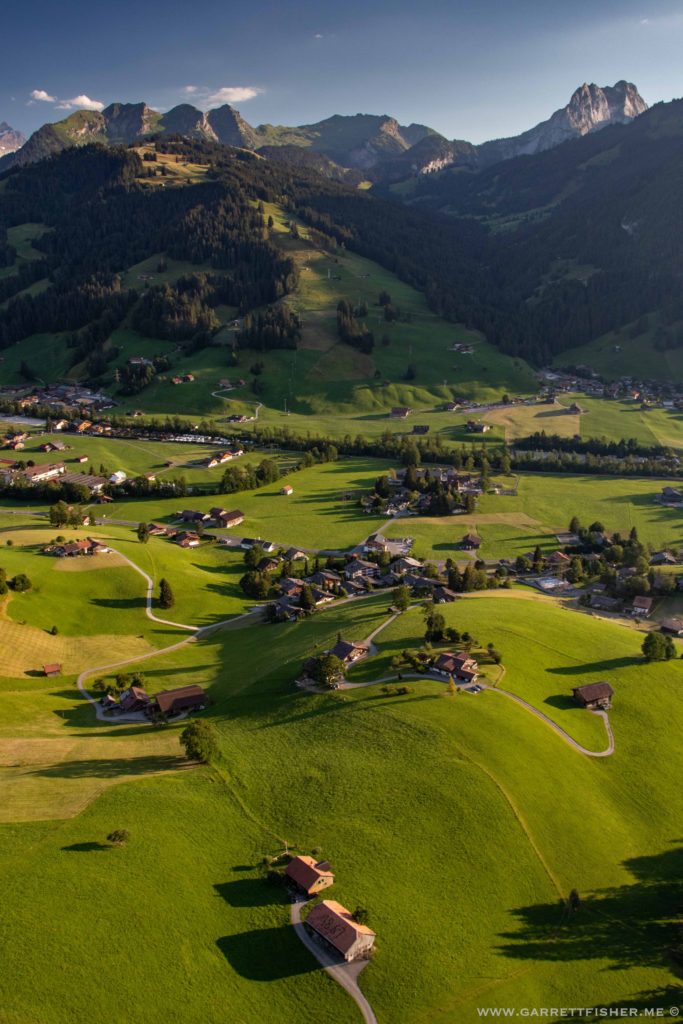