“Magna opera” is the plural form of the latin phrase “magnum opus,” which is defined as “a work of art, music, or literature that is regarded as the most important or best work that an artist, composer, or writer has produced.” That a plural form exists at all is indicative of a case of vanity or confusion, as there should only be one “best” work, but here we are, me on the soap box declaring that I have two.

The first magnum opus was “Glaciers of the Rockies.” I had bitten off nearly more than I could chew with that one, flying all of the glaciers in the American Rockies before packing it up and fleeing to the Fatherland (and shortly thereafter packing it up and fleeing from the Fatherland, but I digress). It took two and a half years after I took the flights to get the book out. Since then, I felt that the pinnacle was achieved and that new glaciers were something of a regular “presence” in my life. I had already flirted with a few small remaining glaciers in the Pyrenees, albeit not enough to bother writing a book. Then after the magnum opus, I was off frolicking in the Alps, a comparative orgy of glacial features. Somehow, I got the idea that my then current exploits had integrated with the magnum opus and blunted its impact, meaning that glaciers were a fixture without a noteworthy zenith within.

While that was the sentient background to my pursuit, the glaciers of the Alps were on my mind right after completing the flights for the 4000ers in 2018. Since I had already seen many incredible glaciers while getting the peaks, I had some familiarity. I then had some time before leaving to play in the Bernese Alps, finding that there was a lot to look at. Returning in the summer of 2019, I went bonkers, having decided that my next project would be virtually every glacier in the Bernese Alps of Switzerland.

I chose that subject as all of the glaciers in the Alps as a whole would require 1000 pages. The range is 654 miles long and jammed with small and large glacial features. The Bernese Alps contain the largest glacier in Continental Europe, along with plenty of others of significant size. The valleys that they inhabit are unlike anything I had to date seen; it is second only to Alaska, Patagonia, and the Himalayas when considering overall height and ice mass. While Iceland, Norway, and Greenland have much in the way of glaciers, their maximum height is well below the Jungfrau; thus, I find the Bernese Alps as a suitable compromise. Yes, I am acting like a pompous sommelier of glaciers….

Anyhow, the project is finally done. “Glaciers of the Bernese Alps” contains almost every glacier (there are some technical debates about whether certain features belong) in the range, with detailed maps identifying their location. If I thought “Glaciers of the Rockies” was my best work, well, I didn’t see this coming, so here it is. Oh, and, there are more glacier books coming, so I’ll have to figure out the opus/opera vanity complex. 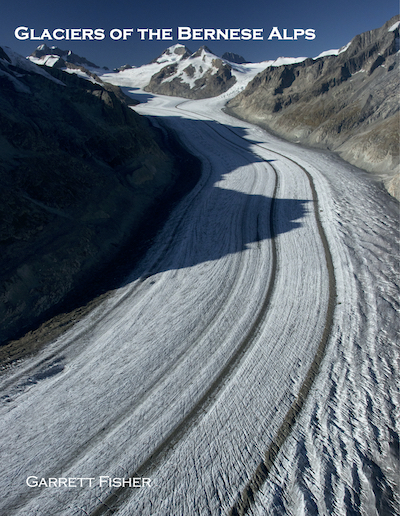