The concept of how many photographs I have taken is something that I hadn’t paid attention to. Up until recently, my images were sprawled in two Lightroom catalogs and 5 Aperture libraries. Once my Mac crashed and I installed 64-bit Catalina, adios Aperture, so it was time to move them all over. While I was in the middle of a process that ultimately took two months, I decided to completely reorganize the whole shebang and make some order out of it. With the pile in one Lightroom catalog, I could easily see how many images I had, which was something like 489,700. Well, half a million doesn’t seem that far off…

Sometime later, I had 400 to go before 500,000 and I decided to go hiking. In the most extreme cases, I will take 800 photos on a hike. Typically, it is something like 140. The plan was to hit 500,000 on a flight after this hike. Well, I had the inconvenient reality of “too much heaven” with a resplendent day of beautiful sky and color beyond what I could have imagined, so it was an 800-photograph hike. Just like that, I hit 500,000, with no special planning, pomp, fireworks, or glacial glory like I was planning.

Instead, the photograph was of a cow.

So, without further ado, I bring you the 500,000th photograph that I have taken: 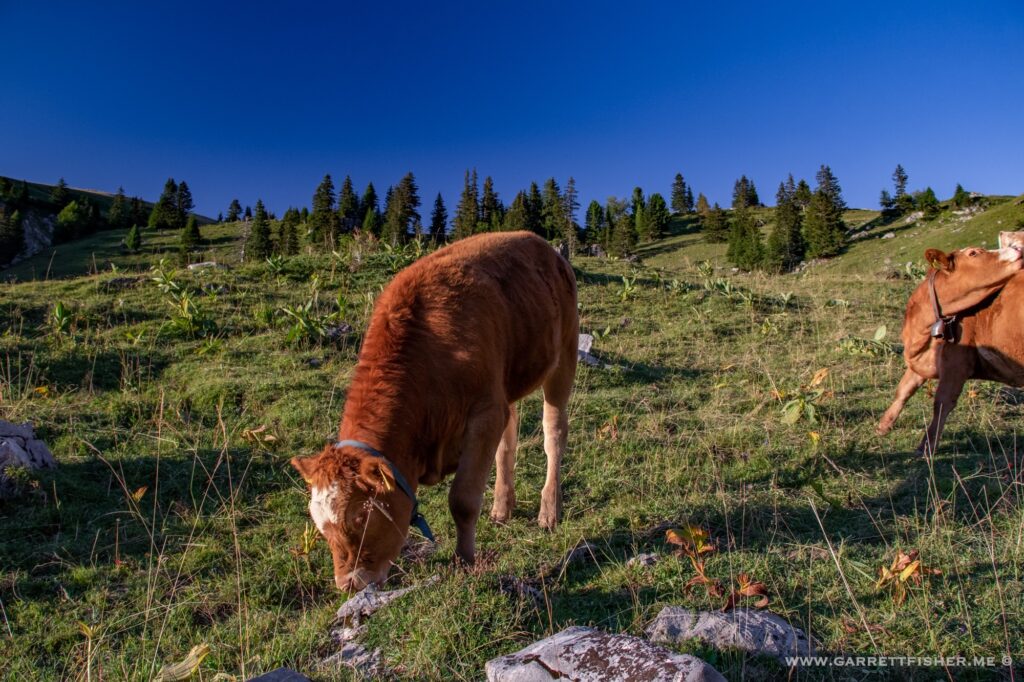 While I would love if the matter was settled and done, there are so many facets as to what the “500,000th” image really is. For example, I have some duplicates in the catalog, though I have a giant crate of film images, and my iPhone shots are not included, so I decided that the 500,000th is the 500,000th, as the duplicates in the catalog are offset by those that are not.

But wait…there are 13 images on my desktop that absolutely refused to import from Aperture into Lightroom. Now what do I do? Well, I shall include the image found 13 later. Maybe this is the one: 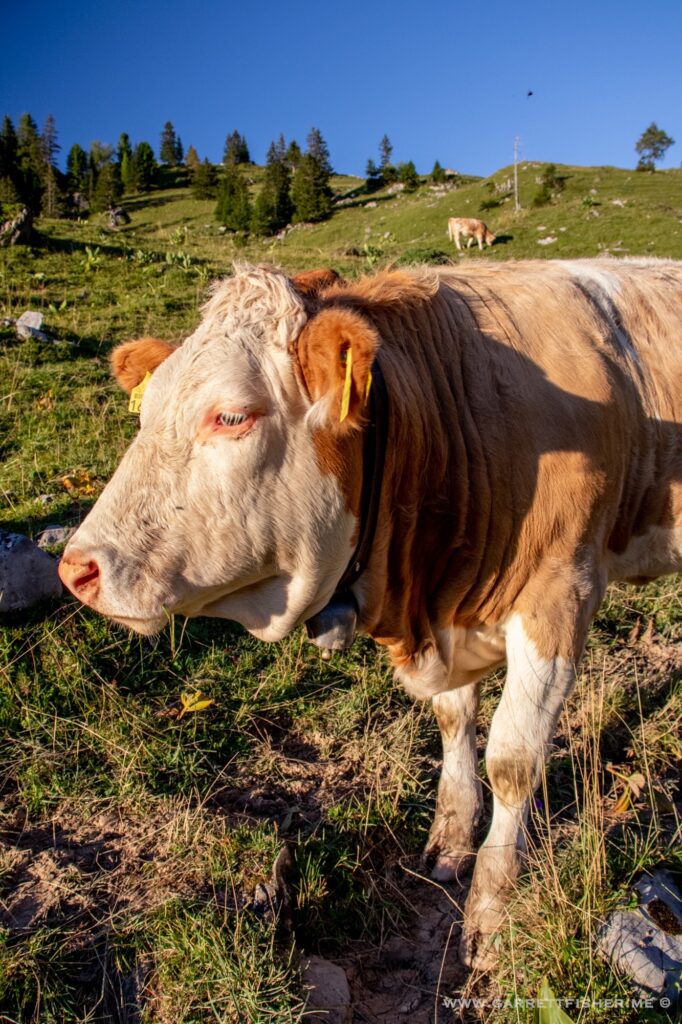 Now this brings up a very complicated matter. Not too long after snapping a shot of this lovely bovine lady, she walked up to me as I was crouching. I am used to it, as cows seem to have this peculiar attraction to me and they all do the same thing: trot up kind of fast, sniff, and then want to be pet or lick my hand. This one was determined to get a piece of my irresistibleness, and as I had my right arm up holding the camera photographing her approach, she whipped out her enormous tongue and attempted to lick my armpit.

Yes, gross. Naturally repulsed, I attempted to stop this sordid episode of reverse bestiality, which, of all things, offended the cow. She decided to attempt to head butt me in response. I guess “no” does not mean “no” in these remote Swiss valleys.

That brings up a Swiss cultural issue in the Bernese hinterlands. I was talking to an airport operations guy, who mentioned that “each of these valleys has their own accent.” They are basically so hillbilly that there is a phrase in Swiss “German” (what they speak up here hardly qualifies as German in any context): “Your father is your sister.” I.e., straight out of the annals of West Virginia banjo-playing incestuous crooked family trees, the same weirdness happens up here. Which, if I am going to bring up West Virginia, I heard an episode of something like “yodeling” on the radio, and it was literally like fusing the worst of a West Virginia horror show with traditional Swiss yodeling. Amazing. Freakish. Irresistible. Terrifying. All at the same time.

I guess it should not surprise me if cultural stereotypes are so extreme as to the “Deliverance” nature of the place that the cows are in on the action too.

The rest of the hike was spectacular. It is hard to put into words the intensity of light and scenery that went on for a few hours. I kept going, long after I had wicked blisters, until the sun went down, keeping an eye over my shoulder for that cow…

While this little shed looks quaint, I was drenched in sweat and pissy by this point. I should have known that it was making me a salt lick (or unmentionably worse) for cows. 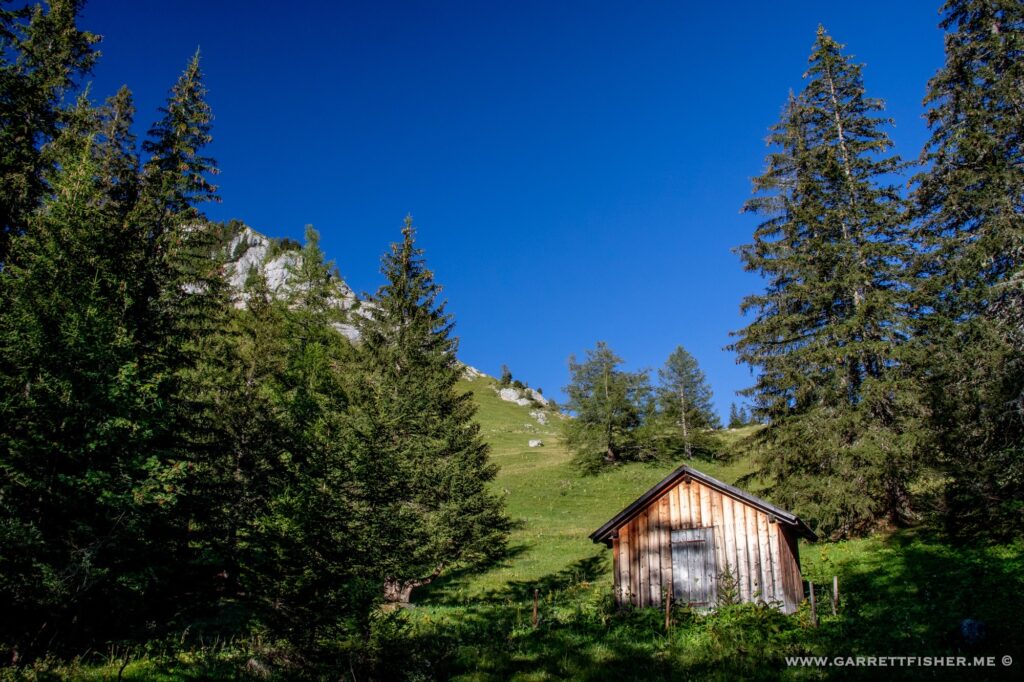 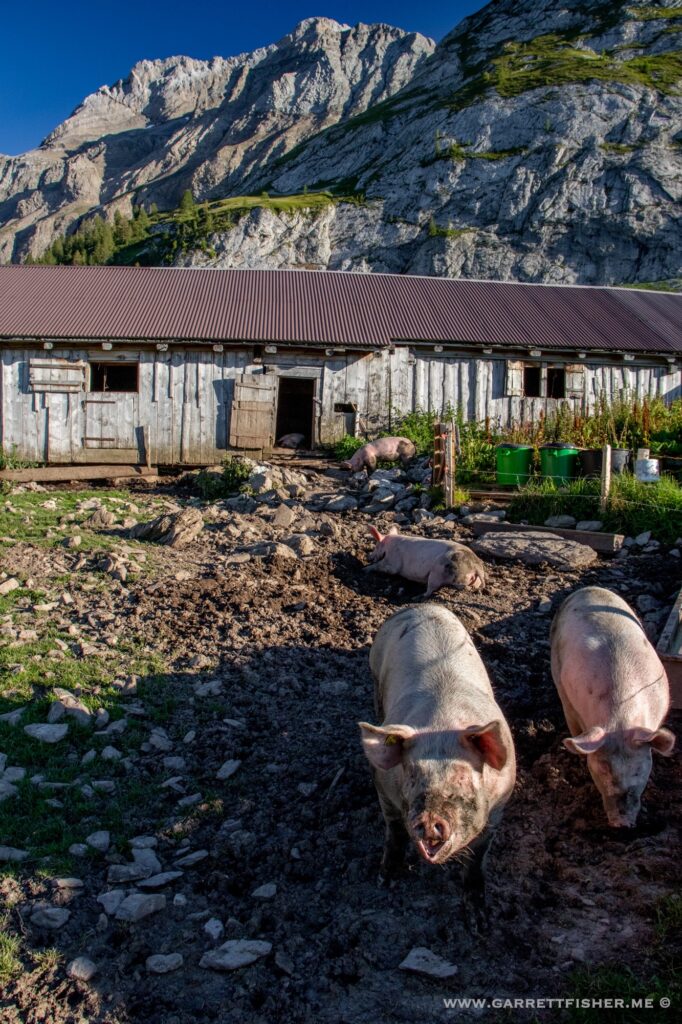 I became “goat Jesus” as they followed me into the wilderness. 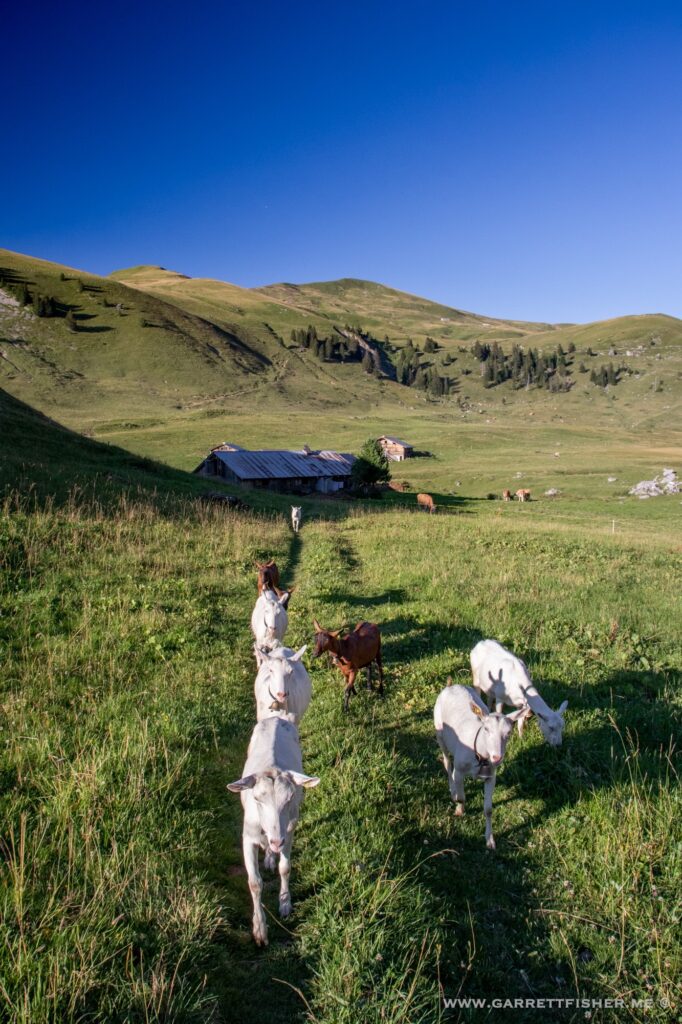 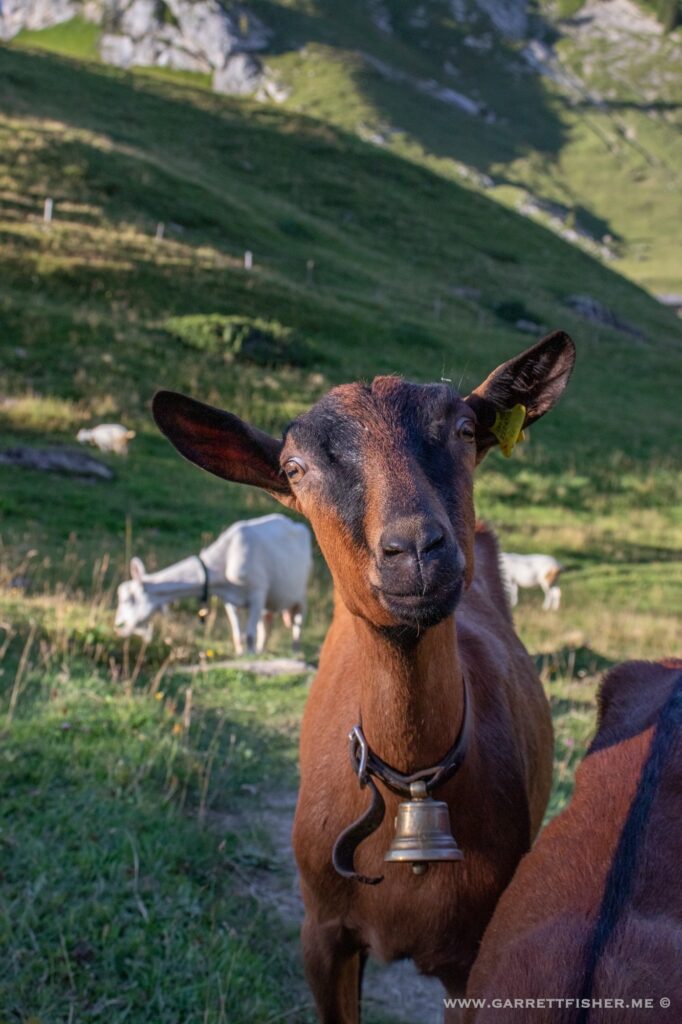 The cows over here were in a spectacularly scenic area and they absolutely refused to pose. The best I got was a belch while chewing on grass. 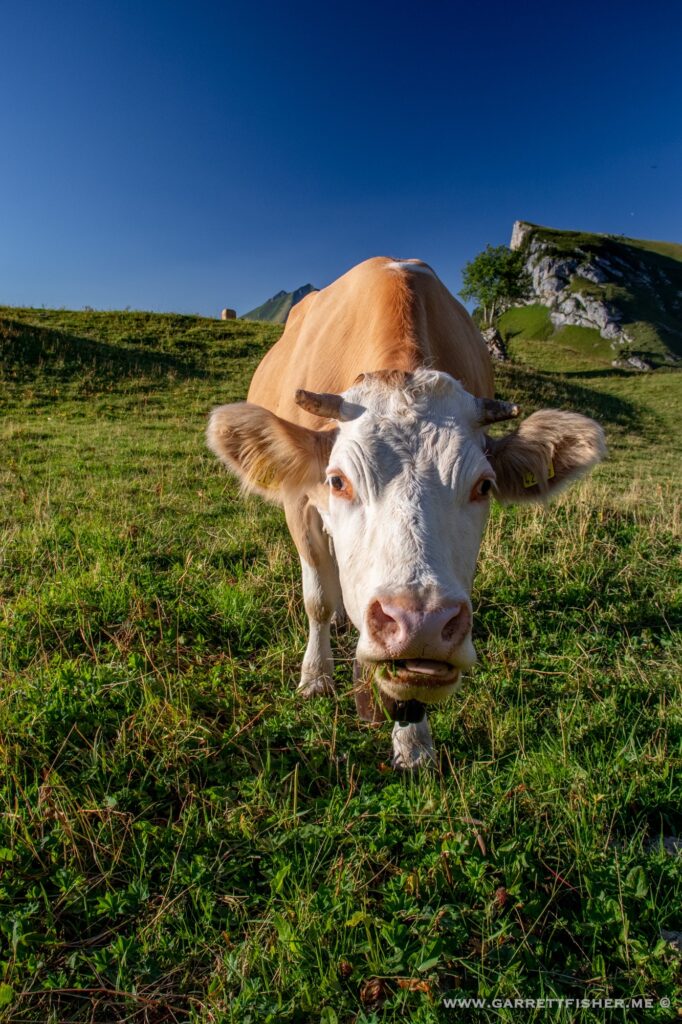 Since we’re on the theme of bizarre mating rituals in dead end Swiss valleys, I shall note that, during a previous hike on the mountain on the horizon, I encountered a German lady that wished to engage in, ahem, “amorous activities.” 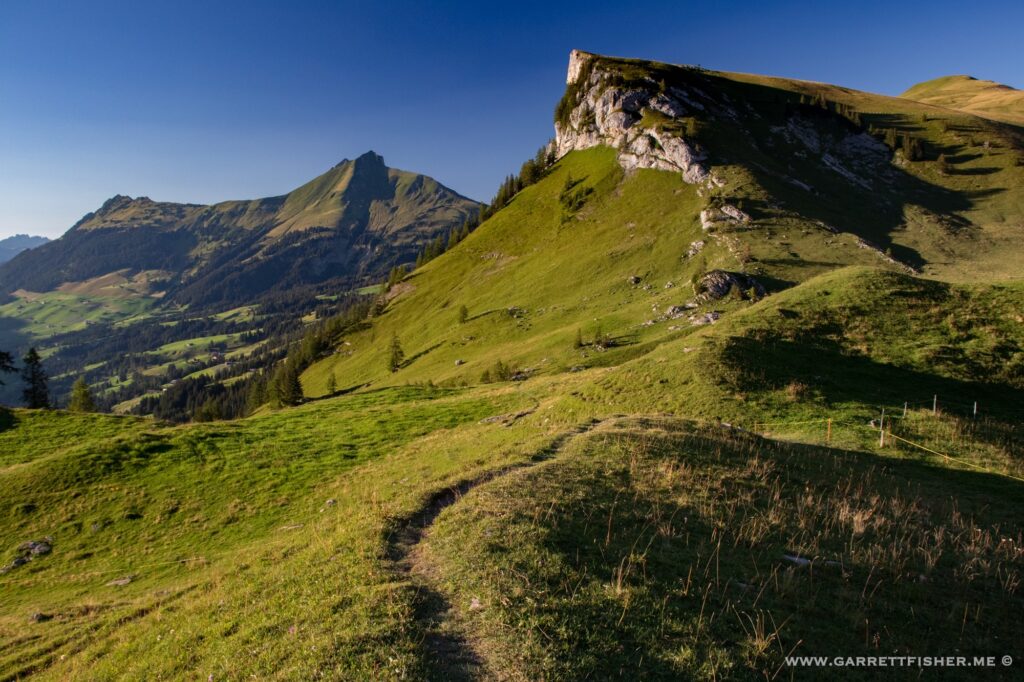 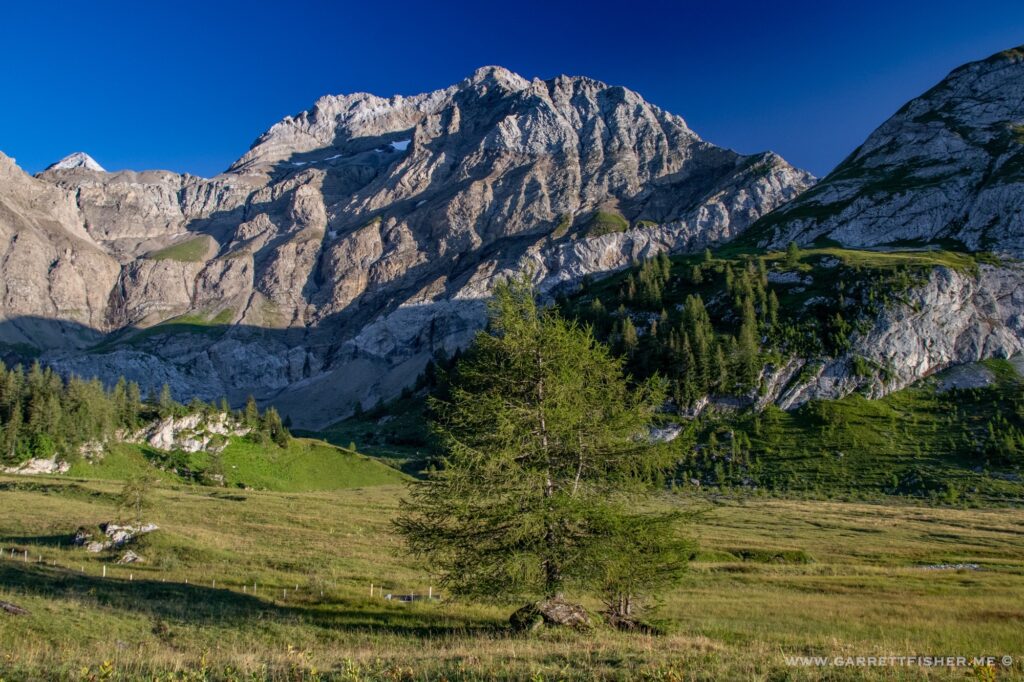 A calf that thinks he is a wolf. It has been suggested that I write a book with cow photographs, for which I might do. My best seller is my horse book, not any of this subpar aerial photography nonsense that I mess with. I seem to be able to interact more peacefully with animals than humans (the sexual predator of a cow aside). 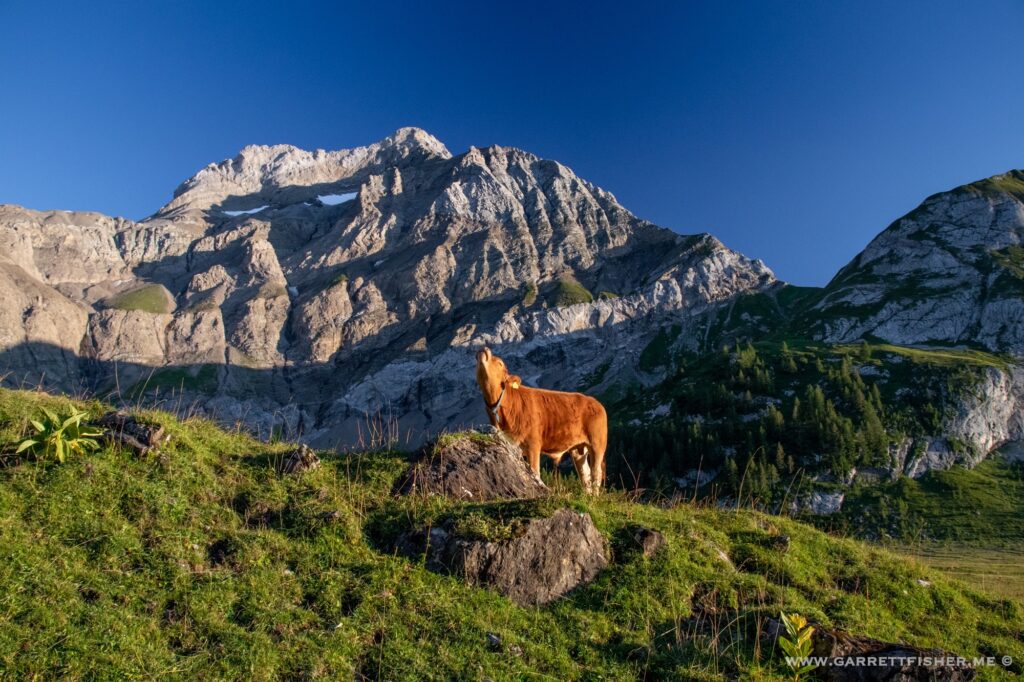 The Geltenhutte is in the shadowed valley, on the left. This area where I am hiking is a frequent descent path while returning to Saanen. It really puts it in perspective to hike around it and realize that the terrain is positively majestic. 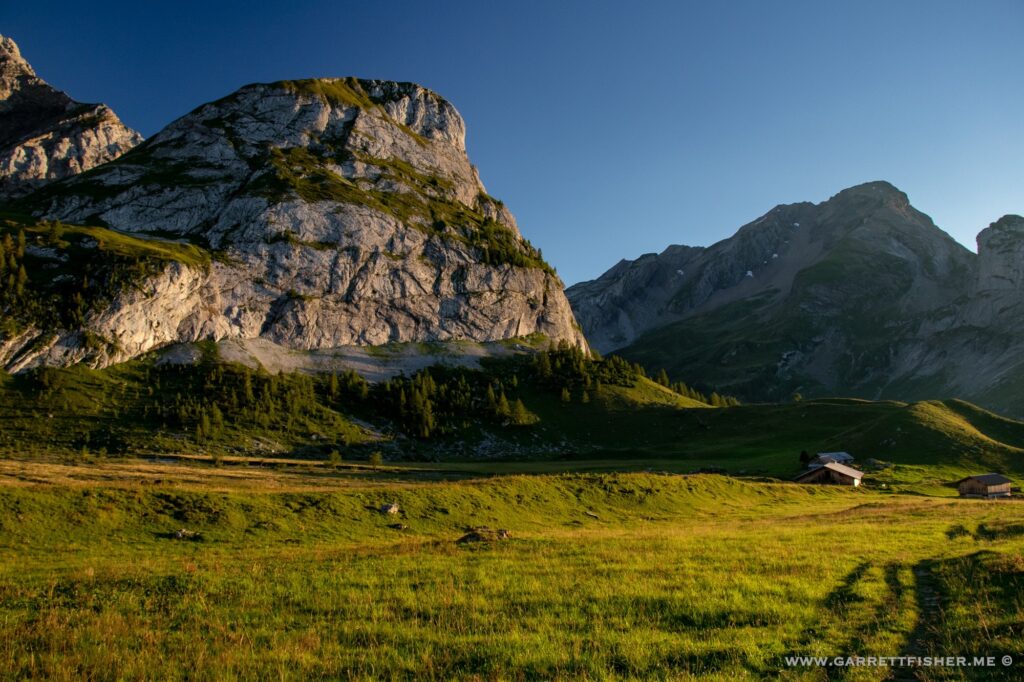