When it comes to images that represent large, round numbers, I seem to have developed a pattern, where I have in mind that the next threshold is coming and, well, I get too carried away with the camera and only figure it out afterward. That leaves much to chance, like my 500,000th image, which was of a domineering, sexually perverted cow that had dubious intentions.

Normally, if I had planned well enough to choose an image that would be eminently demonstrative of my style, I would end up with a resplendent mountain image that is like drinking from a firehose: mountains as high as can be, as far as the eye can see, chock full of glorious alpine goodness. In this case, it didn’t quite turn out as I would have chosen, so, without further ado, I present the 600,000th image that I have taken:

The image was taken just above Trümmelbachfälle, near Lauterbrunnen, Switzerland. It is beneath the Schwarzmönch peak, which is on the flank of the Jungfrau. Had it been sunny, one could crane his or her neck (or tip the airplane over), noting the Jungfrau staring down from a mile and half above. Alas, it was a foul weather day, so that was not to be.

One might ask what I was doing wedged into a steep valley deep in the Alps on a day where the weather was quite evidently marginal. It all started with a business meeting that I needed to have. An associate was in Zürich from the United States, and we intended to meet in the most convenient way which, as further investigation revealed, was anything but convenient. We settled on the fastest compromise: he would ride a rather fast train to Bern airport, and I would fly there.

After discussing business, we had to go flying. Standing at the airport, it was partly sunny to the north over the Swiss Plateau and darkly menacing to the south in the Alps. I pointed to both options and said: “You can have sunny Swiss farms to fly over, or the Alps with scary looking clouds.” “The Alps.” That resulted in this elaborate pre-flight briefing: “if we crash and I am dead, but you’re not, do the following. If we flip over, then take the ELT out. If….” “Has it ever happened before?” “No.” “Let’s go.” Oh, to be 30 again.

The flight itself was pretty basic. Bern to Interlaken, up the Lauterbrunnen valley, then Grindelwald, then into “the Cathedral,” a personal favorite, and back. I hadn’t ever done such a thing in these weather conditions, as it would involve flying west, north out of the Alps, east, south, into the Alps, then reversing it, owing to the fact that such foul clouds over the Oberland block a straight west to east flight to this area. Given the risk and fuel concern, it would be fallacious to undertake such an idea on a marginal weather day. Enter in the stop in Bern, where I could re-assess what I was doing, as well as refuel before heading back, and it worked out.

I tried to go straight back into the Oberland for the return flight and, well, 90 minutes after having flown in that section of the hills, it had turned into IFR and heavy rain, so I followed my steps over farmland, over the Röstigraben to the French speaking side, and then up the Sarine River valley back to the airport. I can chalk it up as one of the handful of times that a meeting or errand has been more efficient in the Cub than other means. 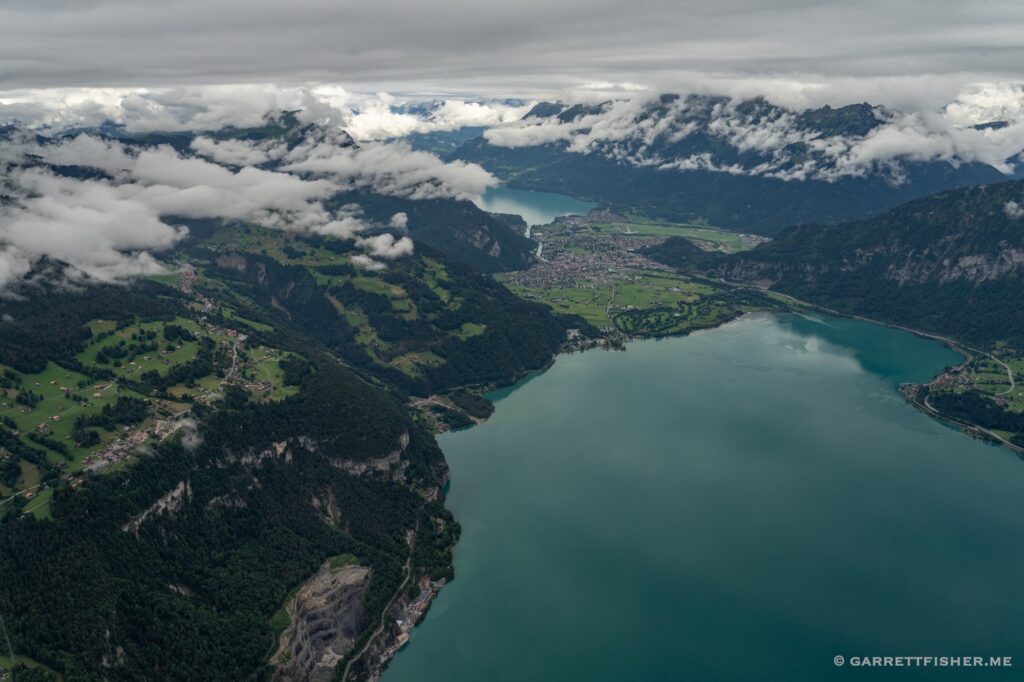 Interlaken. It is much more fun to say it with a Berner Oberland accent. 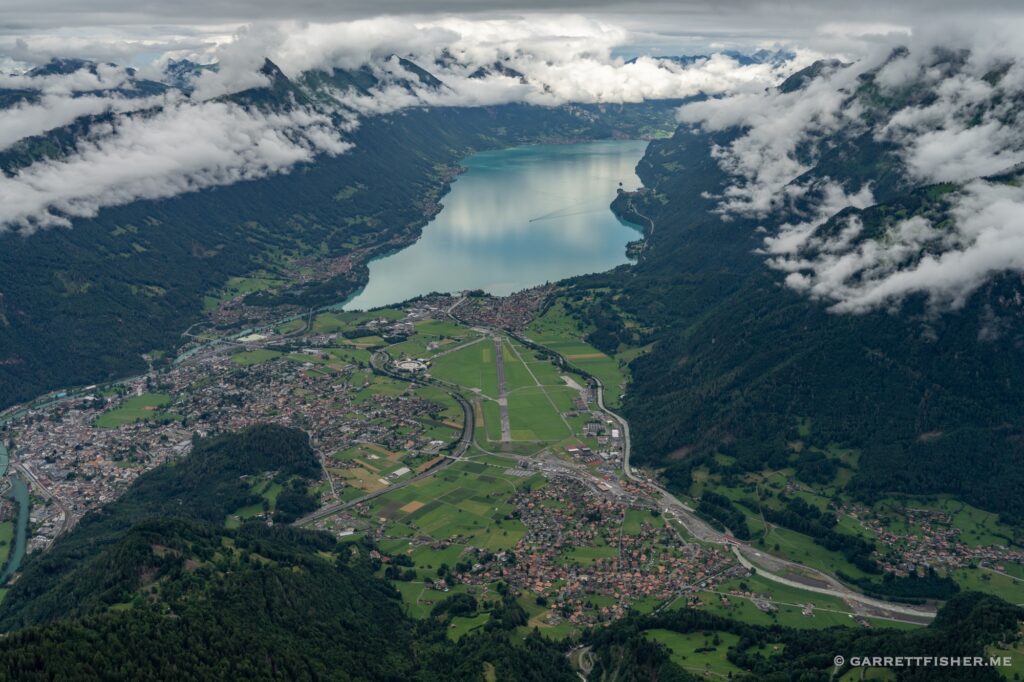 Heading into the valley of death (to the right). Brienzersee to the left. 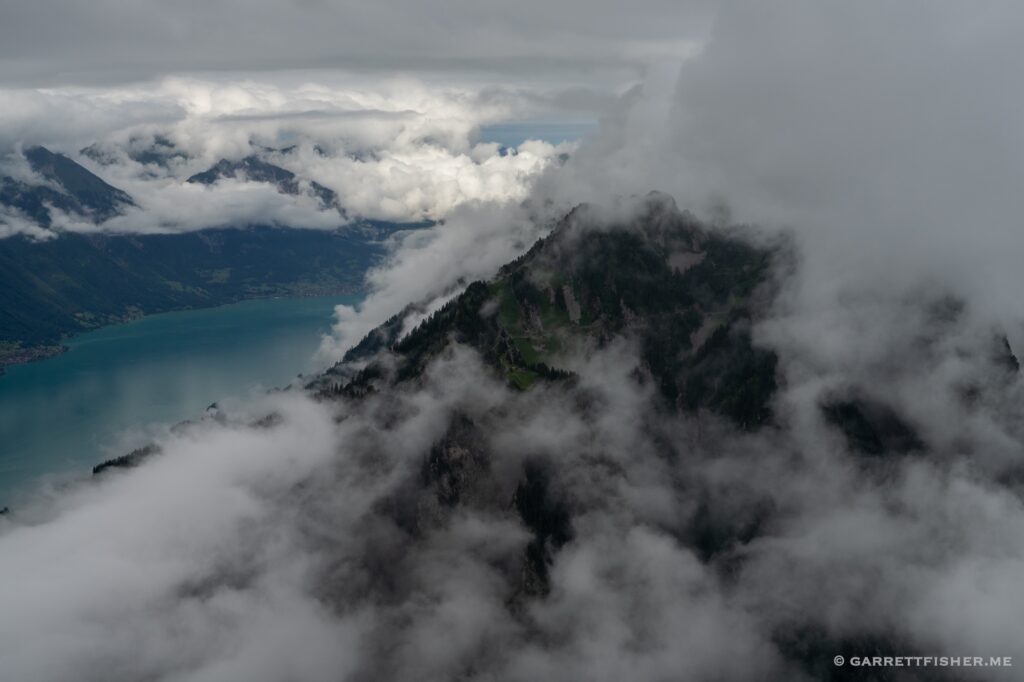 Lauterbrunnen. Image number 600,000 was taken in the ravine to the left. Resplendent weather. 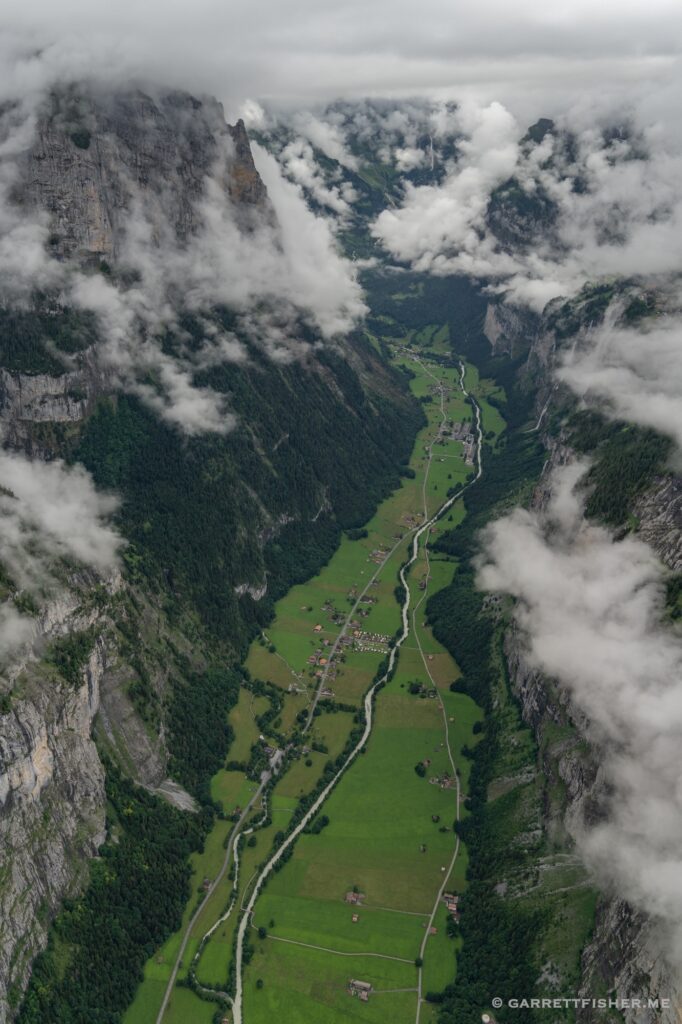 Murren to the left (on the ridge) with Lauterbrunnen village on the center right. Piz Gloria, the filming location for “On Her Majesty’s Secret Service” is located well above in the clouds on the left. 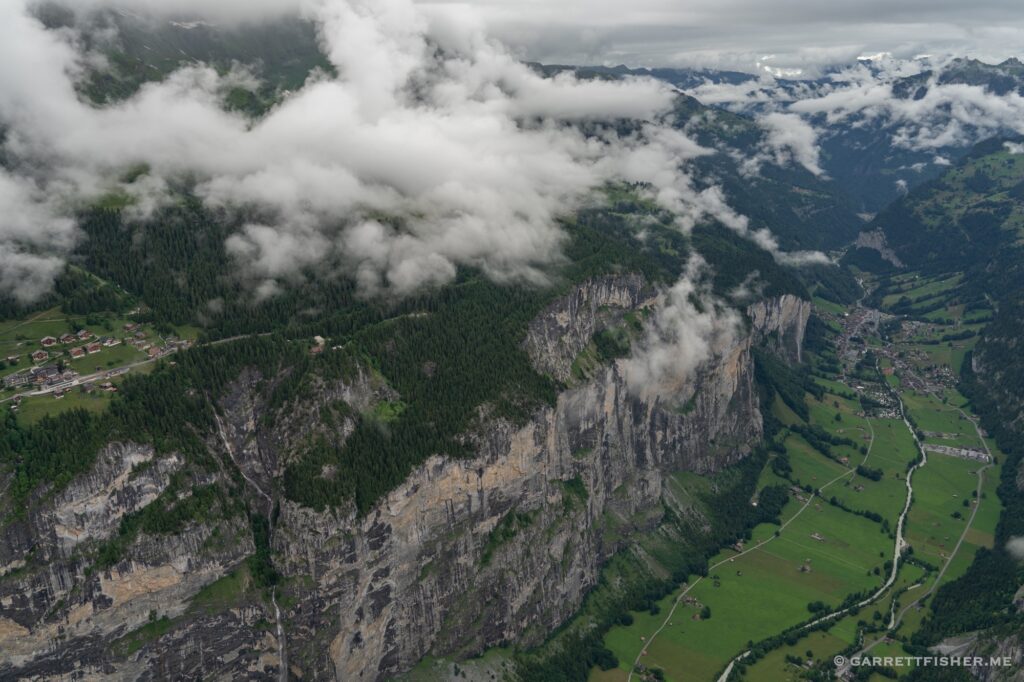 Grindelwald below, with the entrance to “the Cathedral” in the upper middle right.

We went into the Cathedral. Obers Ischmeer. 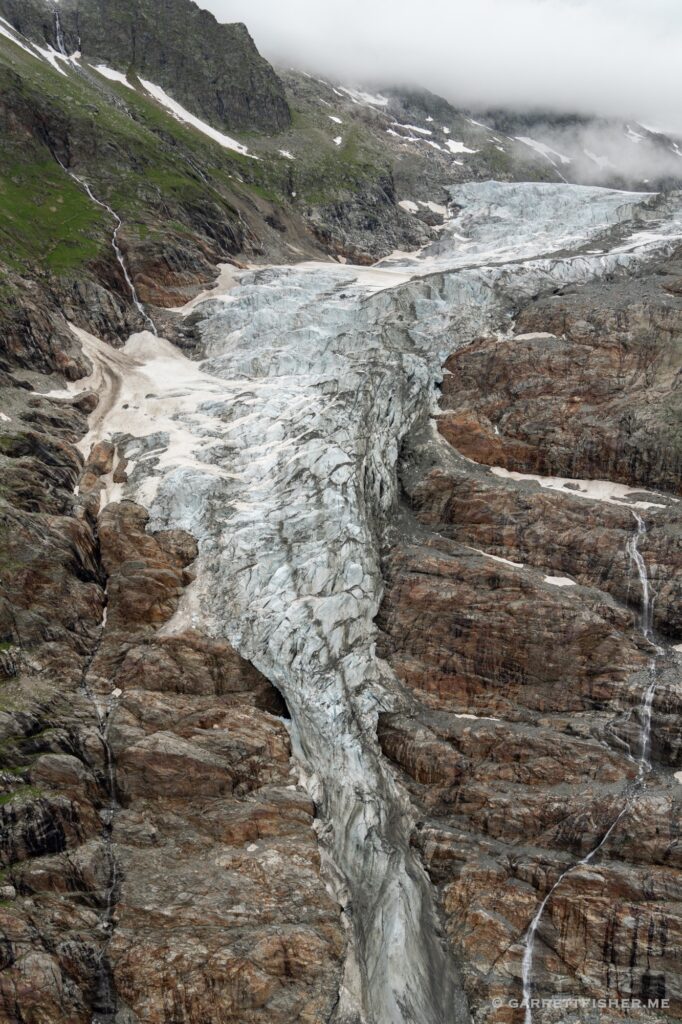 Waterfall coming off of Ischmeer. 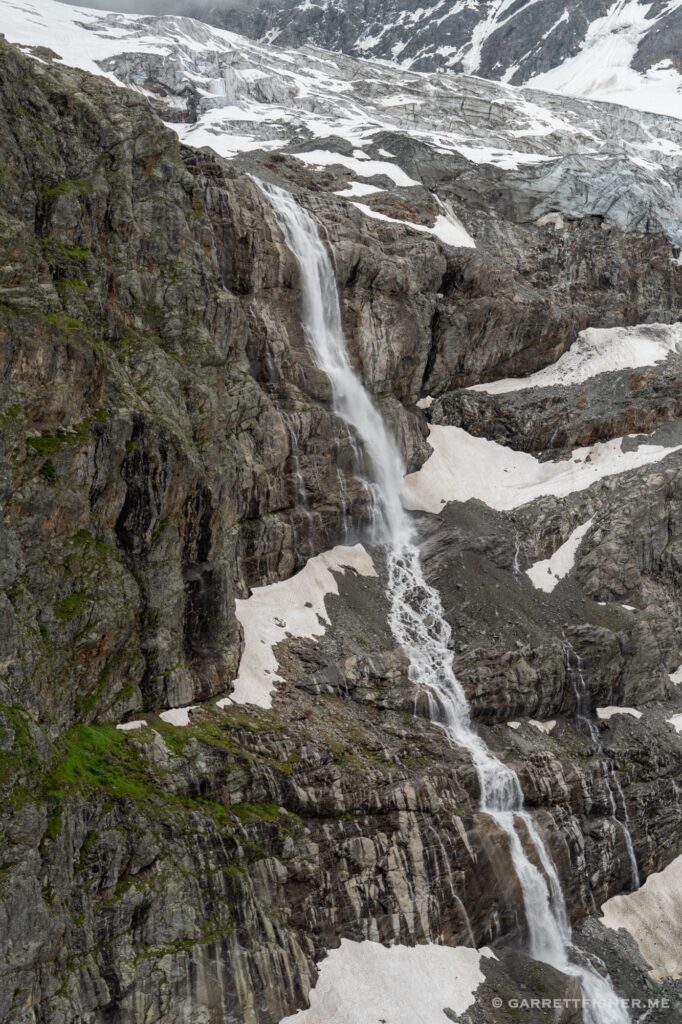 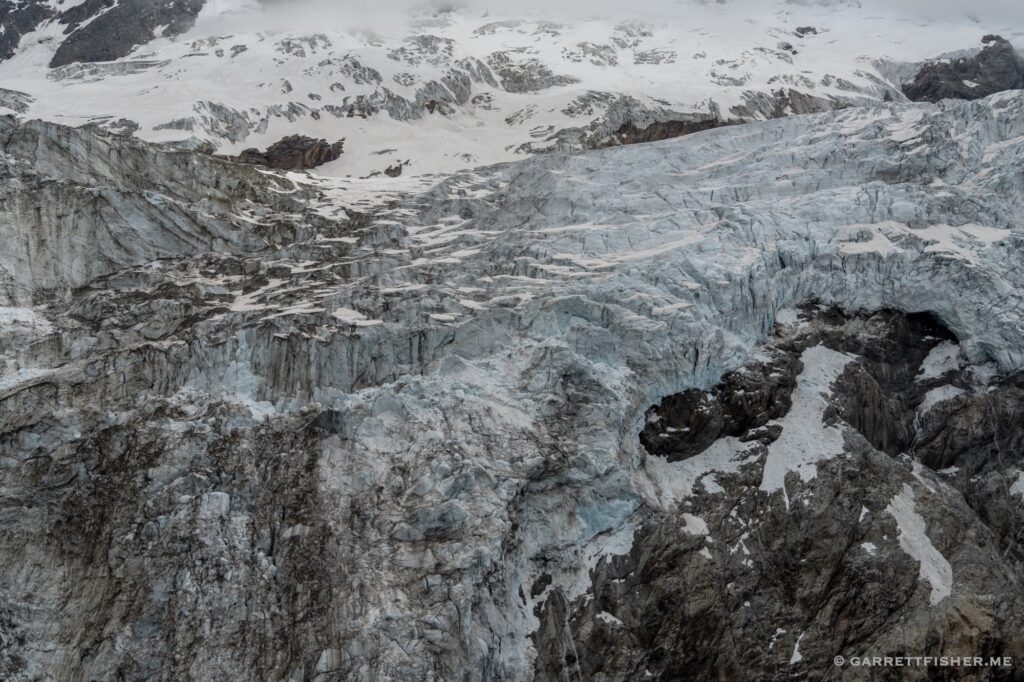 On the way out of the Valley of Death. 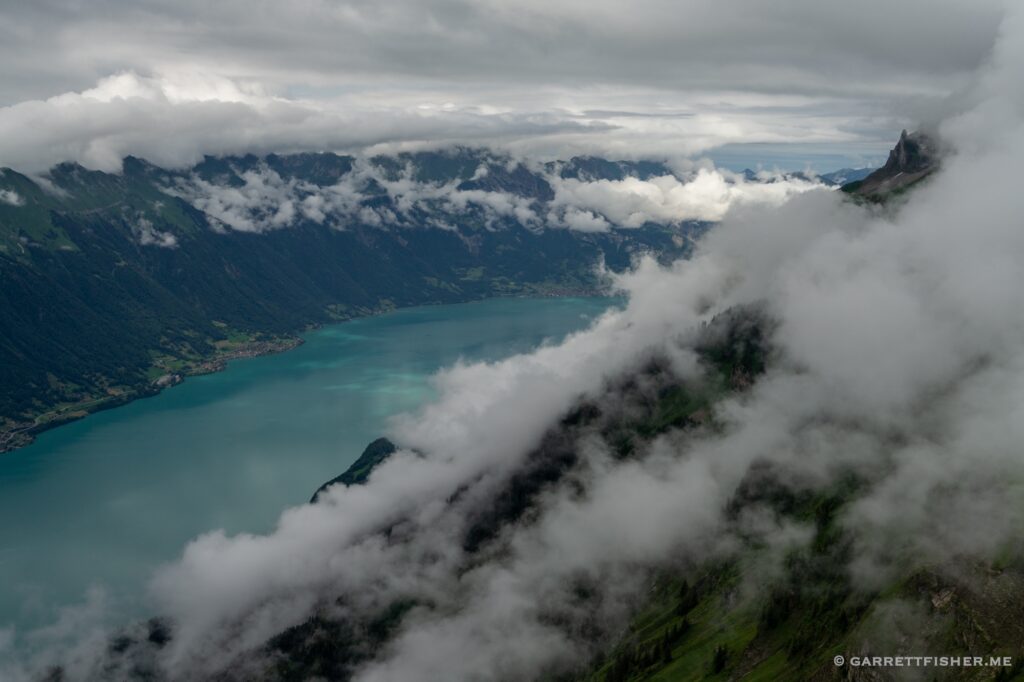 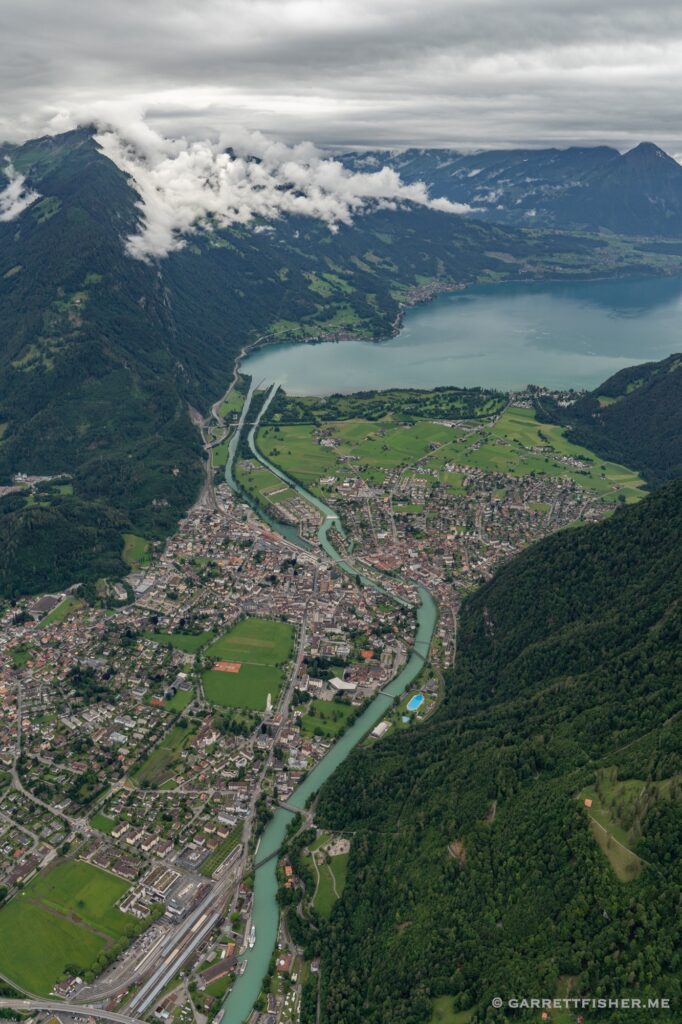 Thunersee and the Oberland to the west.

Spiez. Within an hour, it would be heavy rain and IFR here. 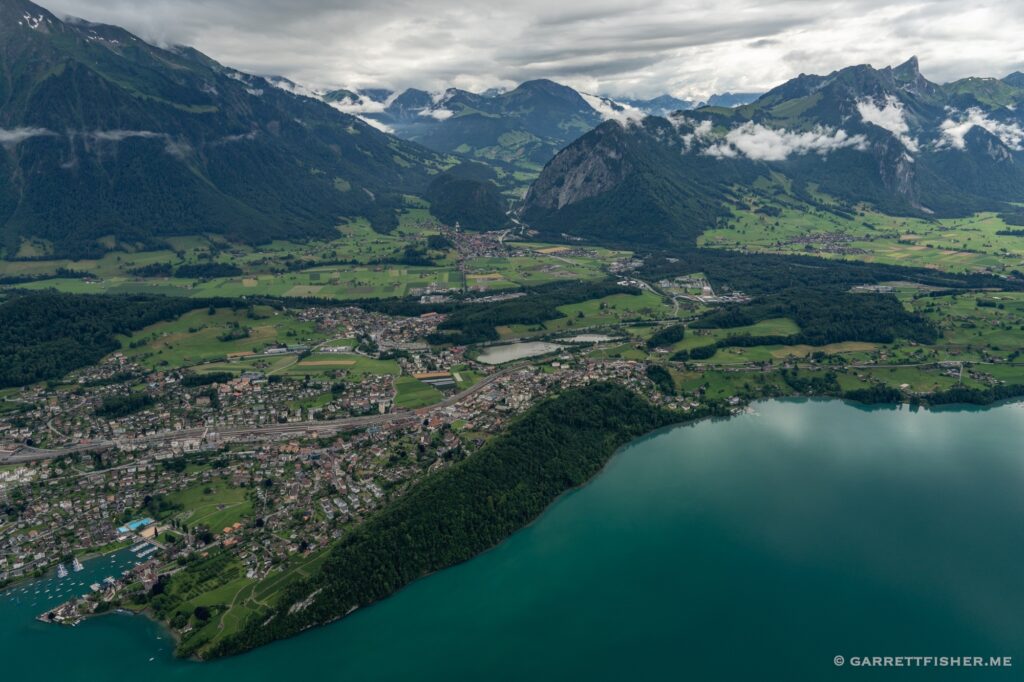