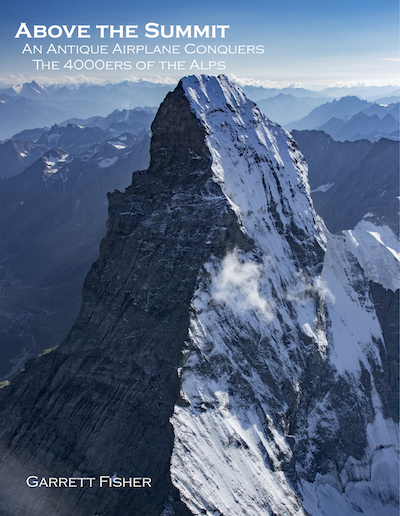 Well, here it is: the cherry on top. After six years of mountain flying in the Rockies, Appalachians, Pyrenees, and Alps, after $5000 of aircraft parts installed in 2015 to fly in Europe, planning specifically for Mt. Blanc, after shipping the airplane from Wyoming to Germany, here we are, having flown the list of the highest peaks in the Alps.

Eighty-two peaks can be found over 4000 meters in height (13,123’ to 15,774’) in the Alps, located in France, Italy, and Switzerland. Unlike their cousins in America, these peaks are covered not only by glaciers, literal ice caps can be found on some of these summits.

I must say I have come a long way since that day in early winter 2013, standing at Leadville, Colorado not too long after deciding to base the PA-11 there. I had only recently figured out how to get the engine to take off at such altitudes; getting to the height of a 14er (mountain over 14,000’ feet) was complicated enough. Yet, there I stood, staring at Mt. Elbert, the highest peak in Colorado, and I thought to myself: “It can’t be that hard to fly to them all.” Ha! It was quite an experience, both in this airplane and not knowing what the hell I was doing. That was my first aerial adventure book.

It wasn’t long before I was upside down (literally) in the Appalachians. Go figure. Winds can be dangerous there, too. Then back to chase glaciers in the Rockies. How I thought that was the pinnacle of achievement! Little did I know that those piddling snow fields just whet my appetite. The Pyrenees were a bit of a necessary breather, as just about everything I came to expect about European aviation was completely false, so I had a chance to thoroughly enjoy myself and regroup, while also happening to realize the place was filled with rotors and mountain waves. So much for planning…

And then the Alps came. In a way, it was anticlimactic. It should have been more dangerous, yet it seemed to be a relatively rational experience. Now why could that suddenly be? I would venture to guess it’s pretty simple: I had by then figured out what mountain flying was all about.

Honestly, in 2013 when I made that fateful decision to move to Colorado, I thought I would just live there happily ever after. Never in a million years did I expect this to happen.