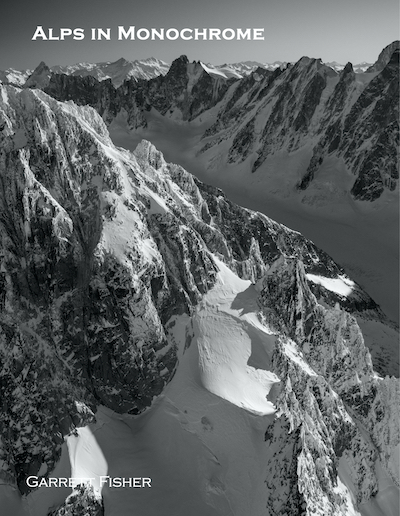 Despite highly prolific artistic output, there have been only two artists that Garrett Fisher is willing to ascribe as having any influence on his work. Ansel Adams is the more significant of the two, an iconic photographer of black and white images in the American West. Having followed in Mr. Adams conceptual footsteps (albeit with an airplane), Mr. Fisher’s early aerial photography works were found in sometimes overlapping places in the boundless spaces of the American Rockies. It was always in the back of his mind “what Ansel Adams might have done if he had access to an airplane,” as landscape scenes as seen laterally and from slightly above were of similar majesty. Long desirous to produce a work of black and white images, it was not until extensive exploits in the Alps with the same aircraft did the author discover a fusion of the two archetypes, allowing for the production of his first monochrome work, his 24th book. Containing 78 aerial images, the book focuses on sharp, scenic, and mystifying terrain found in the Swiss, French, and Italian Alps taken from a 1949 Piper PA-11.