Wired Magazine was the first place I found out about the term “map porn.” That about describes it. I am one of these strange people that clicks around Google Earth in terrain mode, satellite mode, and regular old road map mode, panning, zooming, browsing, and clicking around, seeing what angle of the same old planet Earth will show itself that wasn’t there before. Its not like the Earth hasn’t been mapped and yet, like a moth to a flame, I am drawn to continue to poke around and see what I can find. I never have a lack of surprises.

Now throw this thing called “Europe” into the picture. Having this map porn fetish since I was young, I fulfilled it the old fashioned way: looking at atlases and books. Those had the predominate limitation of being in English and focusing on the United States of America. Why should the good taxpayers of the State of New York bother funding education to teach their children about the geography of other countries? If that isn’t a pork barrel project, then I don’t know what is. Thus, I restricted my map pornography to American print atlases, because there was nothing outside of America, except where the ocean runs over the edge of the flat earth.

I decided to share the process of what I find. I am looking for things to fly to, and I am specifically not giving a hoot about rolling hills that look like Pennsylvania. There can be nothing worth flying to if it looks like Pennsylvania or upstate New York, quite simply because I grew up in those nether regions, and there is absolutely nothing worth pursuing to replicate that.

Looking at regular satellite view, most of Germany looks the same when looking at the photographs from the sky. It’s green, there are lots of fields, some trees, and that’s that. One could say the same thing about the East Coast of the US, and it takes a thorough analysis to find things that stand out. This is what I have found in Germany so far, using Google Earth terrain mode. Don’t forget that the Alps are the southern border of Germany, and that land of milk and honey goes without saying that I will most assuredly wait until the windiest day I can find to fly there.

For those with trouble reading maps, this is Germany. We are located just a hair south of Frankfurt. Note how most everything looks pretty flat, except for the Alps (this is terrain mode, not a satellite shot).

Rhein River Valley (“Rhine” in English – I REFUSE to learn two versions of German place names. You’re getting the authentic German version). Anyway, the Rhein River runs down the middle. The Pflazerwald is in the lower left, where hilly terrain suddenly gives way to wine country. To the right is the Odenwald, which is surprisingly hilly with castles lining the hills overlooking the valley. France is in the lower left. 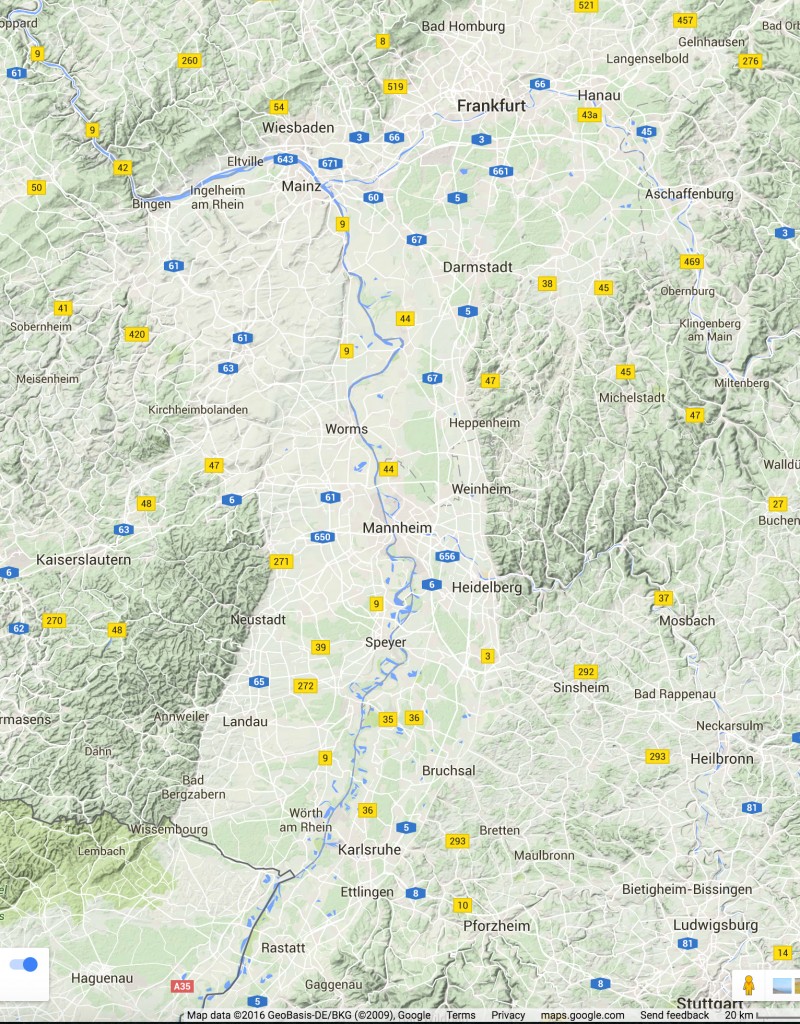 Continuing down the Rhein valley, the France Germany border becomes the river. The Black Forest is to the right, with elevations almost as high as the NC mountains, and west of Colmar, France is the “Parc Naturel des Ballons des Vosges.” That is a French word salad for a hilly forest that is probably pretty. We went to Strasbourg last weekend, and I got splattered with dijon mustard that squirted out of a sandwich as a Frenchman bit into it. Vive Le France!

This is south of Stuttgart. Notice where the plateau gives way to the Neckar River Valley. That will probably be quite pretty. In Tuebingen (center left), a Chinese guy got stuck in a concrete vagina and had to be rescued by firemen two years ago. 26 emergency responders came to see it and it made international news. 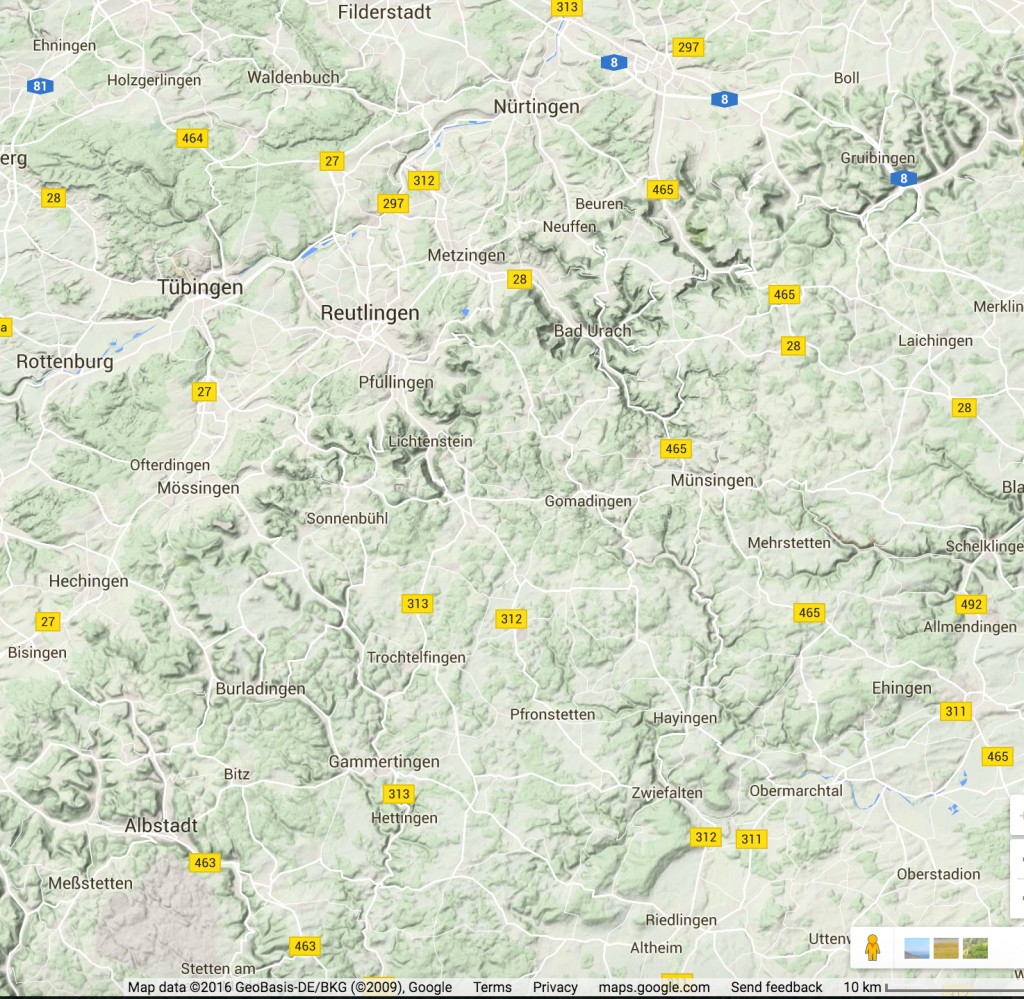 These hills look interesting in the middle of the image, particularly so because I took a train from Fulda northeast through here and saw it from the ground. 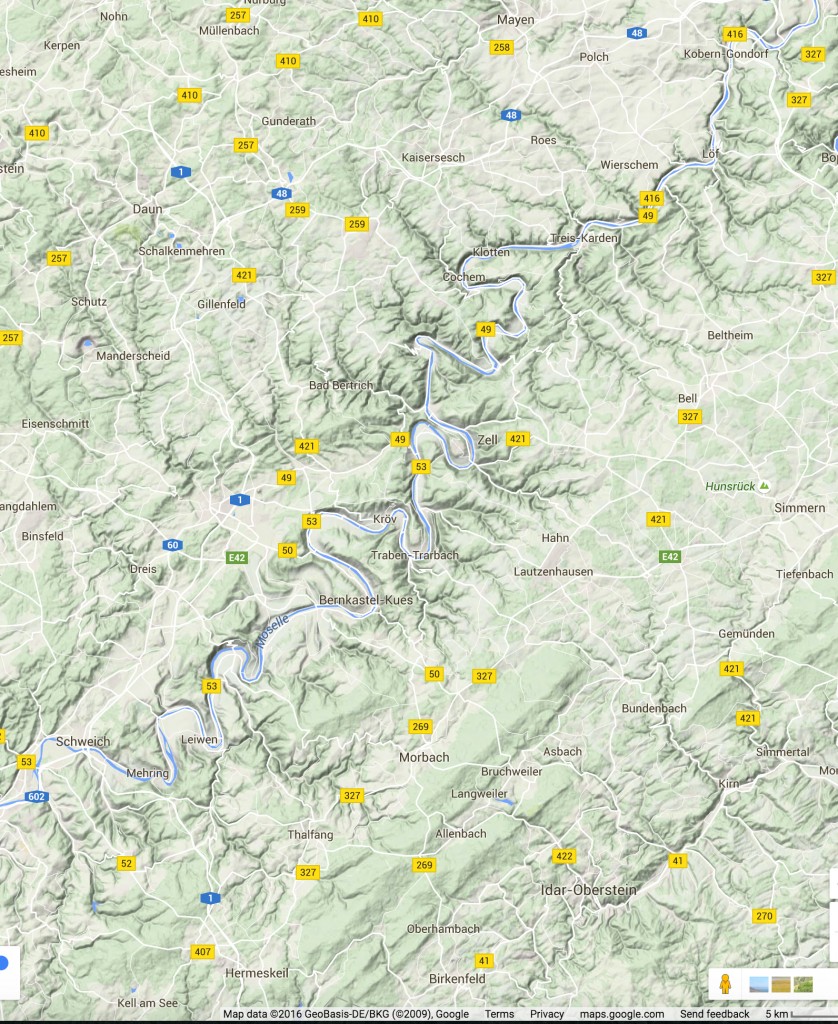 NW of the Harz Mountains, this terrain looks pretty wild as it gives way to the North German Plain. 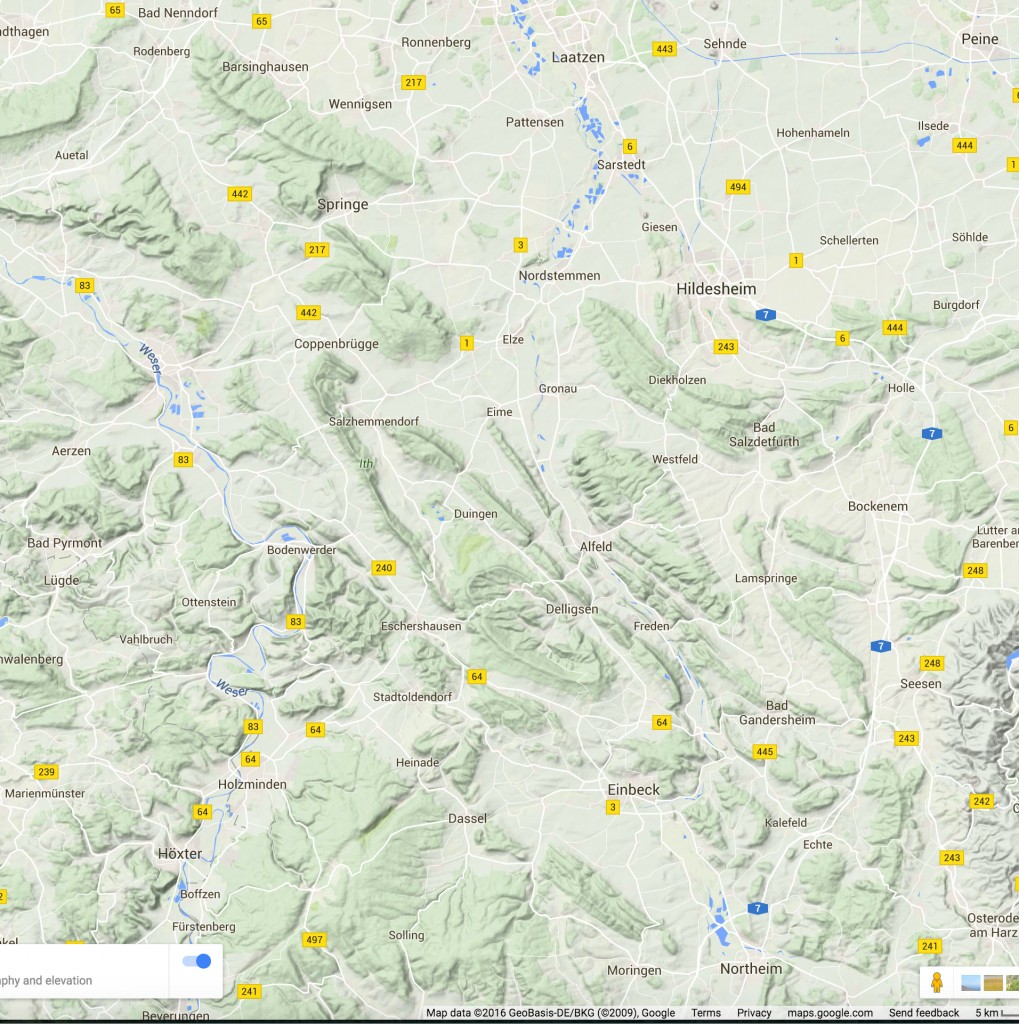