For some reason, I desire to share the poetic transcendentalism of aviation, and it’s just not coming out in words. I suppose I could just explain some elements of the flight in question instead.

I was on a tear to get as many autumn photos as I could. While the Valais has an abundance of larch trees at timberline altitude, I had long known that the Engadin in eastern Switzerland is an epicenter of these trees. They like to grow in sunny conditions, without mist and fog, so one tends to find them along the ridge of the Alps, where neither the moist Italian plain or the rainy northern side of the Alps can influence. The Engadin and St. Moritz are in an area where valleys are higher yet peaks lower, a condition that looks like elements of the US Rockies.

Anyhow, that is where the larches would be found, so I planned a trip. Instead of flying to St. Moritz and returning, which could be done in a long day with a bit of time to spare before sunset, I wanted to take another flight basing out of Engadin Airport, heading east to see what was there. I had landed once at that airport a year prior, though it was before the larches had turned.

I chose a flight path slightly different than the outbound and return leg flown a year ago. On that flight, I went higher, aiming for the easternmost peak over 4000m, then flew the ridge back to Sion as above timberline terrain was the most attractive. This time, I flew eastbound along the Rhône at lower altitudes to get photos of some deciduous trees in color, then I climbed through the Goms Valley, flying along larch tree level. It was over the pass at Nuefenen-Pass to the canton of Ticino, where Italian is spoken, then eastbound over two ridges to Maloja Pass. That put me square in larch territory, right over a series of beautiful lakes. It was heavenly.

After refueling, I took a before sunset flight northeast down the Engadin, south toward Val-Müstair, then east into South Tyrol, Italy, a section where German is spoken in the mountains. Then it was north over the border into Austria, where I turned west about 8 minutes later and crossed back into Switzerland, for an evening flight pointed straight into the sun with sharp terrain shadows.

I spent the night and returned the next day, heading on the north side of the spine of the Alps, via Laax, Andermatt, back into the Goms Valley, then along the south side of the Bernese Alps, before crossing at Pas de Cheville.

It was a technically challenging affair in that I was pushing the distance to within 20 minutes of my fuel reserve. On flat surfaces with predictable winds that is not a problem, as these things can be forecast and calculated. Given the depth of alpine valleys, winds may prevail in one direction, though they funnel, twist, swirl, and channel in varying ways, complicating the ability to forecast exact flight time. Add to the fact that airports are more distant in the Alps and I was choosing a somewhat circuitous path, and I’d say it was more technically complex than most flights I take. It turned out that my intuitions about wind allowed for picking flight altitudes and valley orientation that avoided the worst of the headwinds.

Veysonnaz – some deciduous color with larches above right. 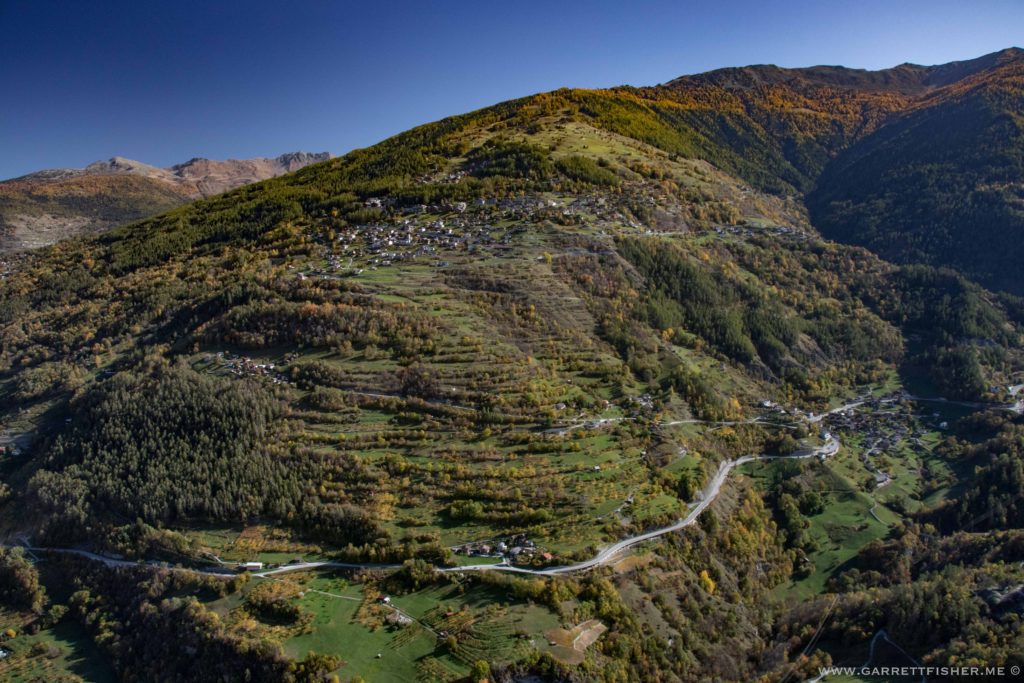 Nax. Vineyard color below, larches above. 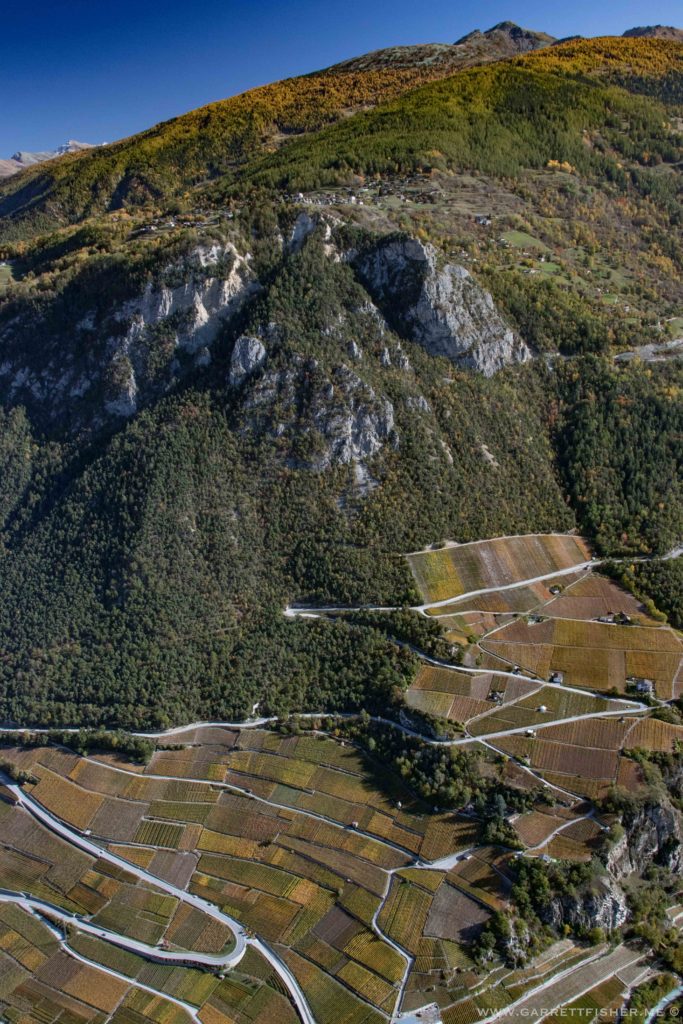 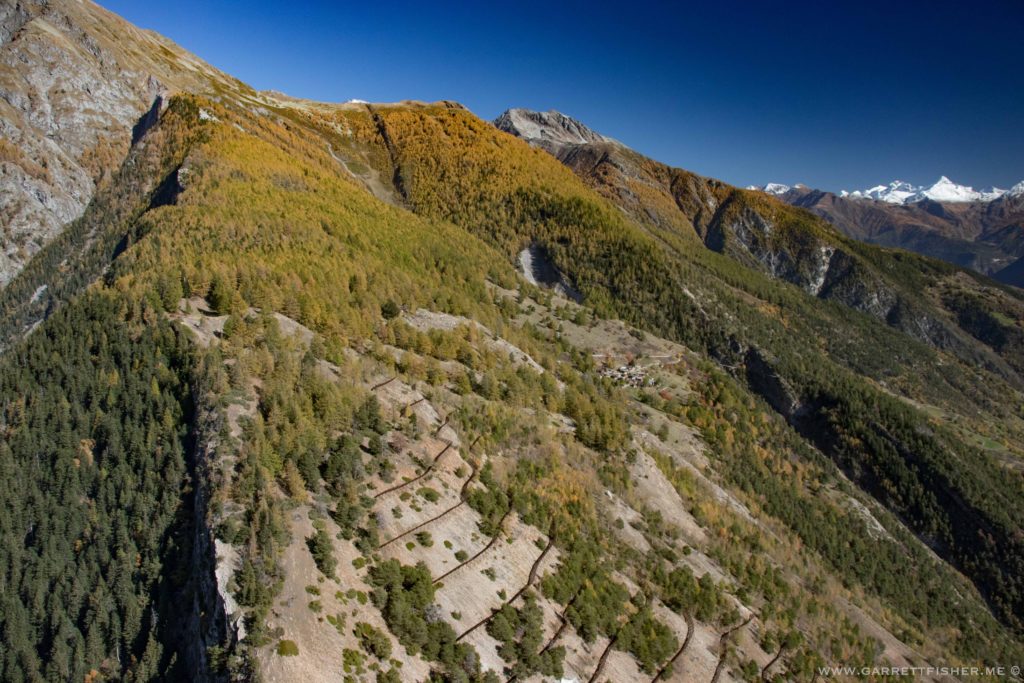 Larches on the slopes of Bättlihorn, lower Goms valley. 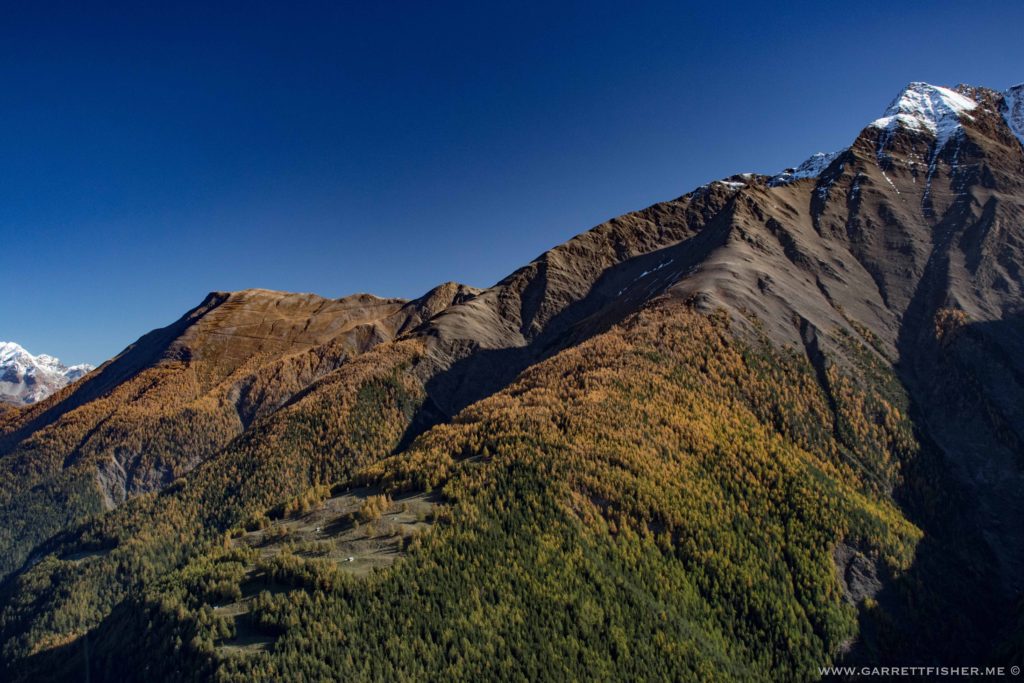 South side of the Goms valley. 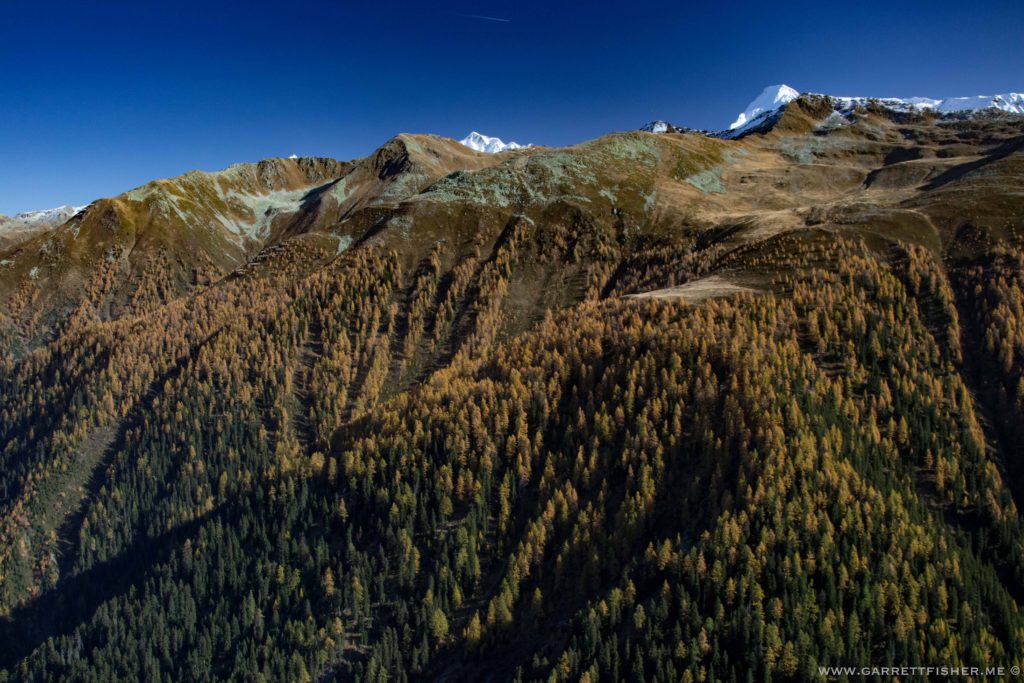 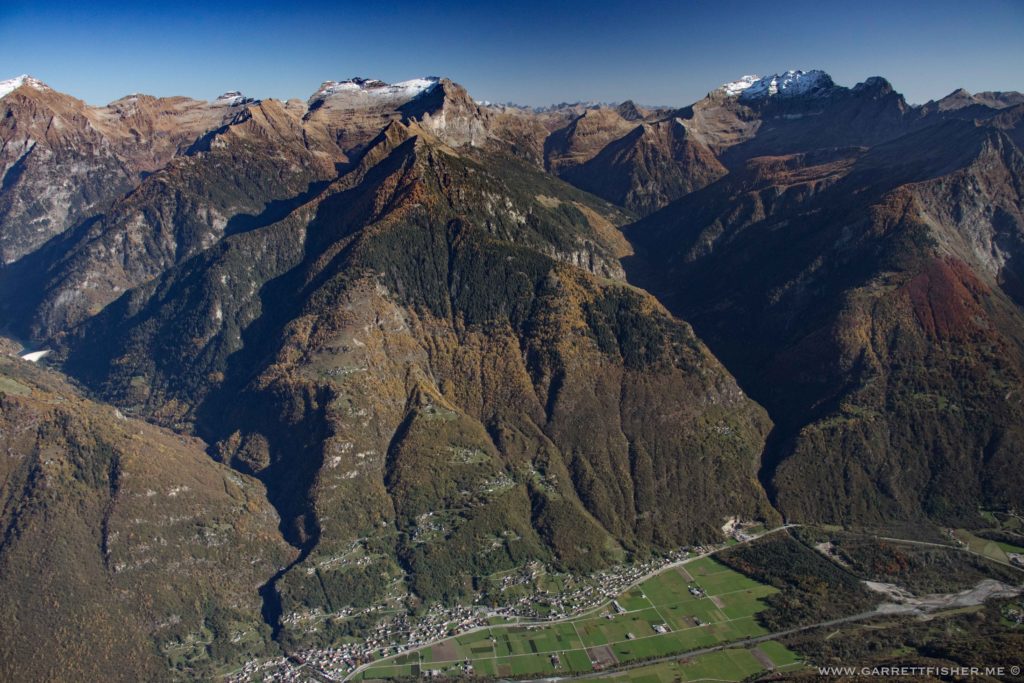 Over the Forcola pass, looking into Italy. 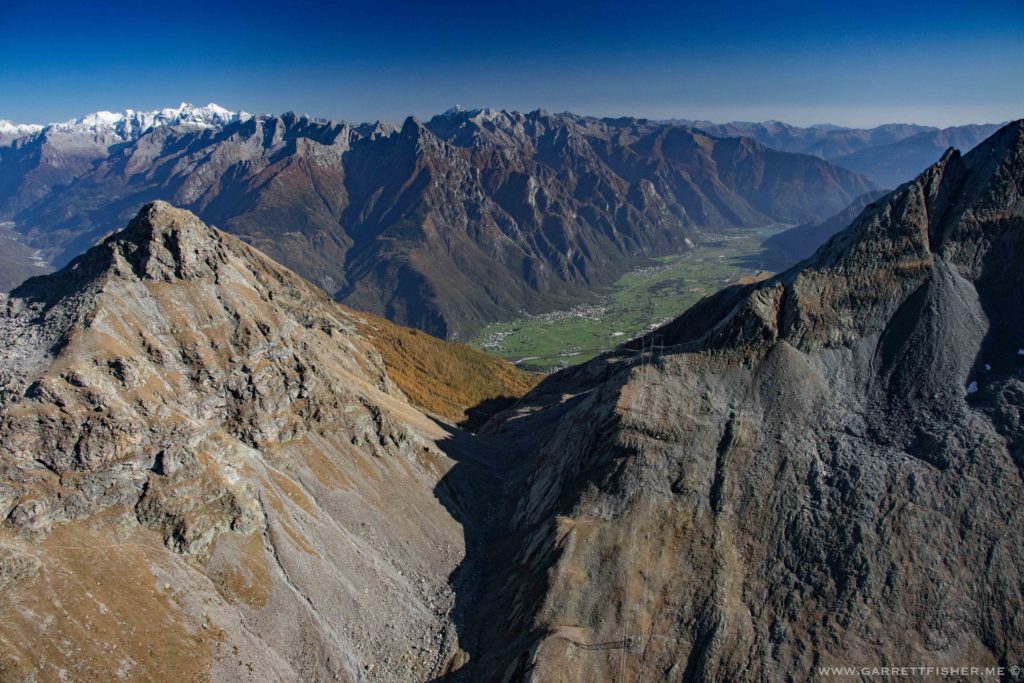 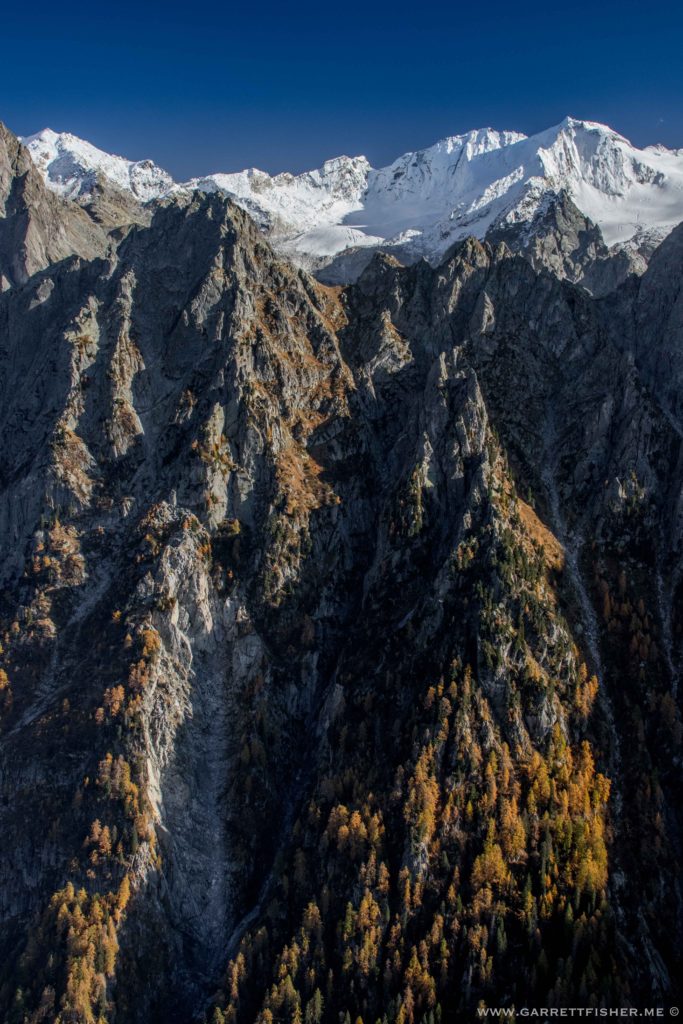 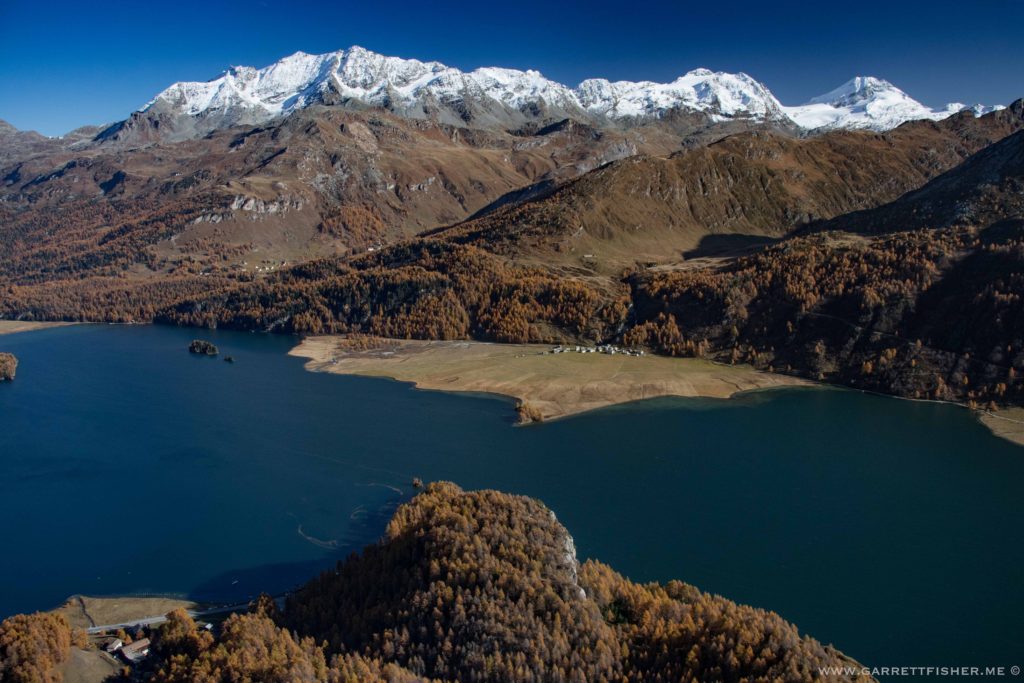 Silvaplanersee. I believe one of those mountains is a “hydrological apex” where waters drain to the Mediterranean, Black Sea, and North Sea. 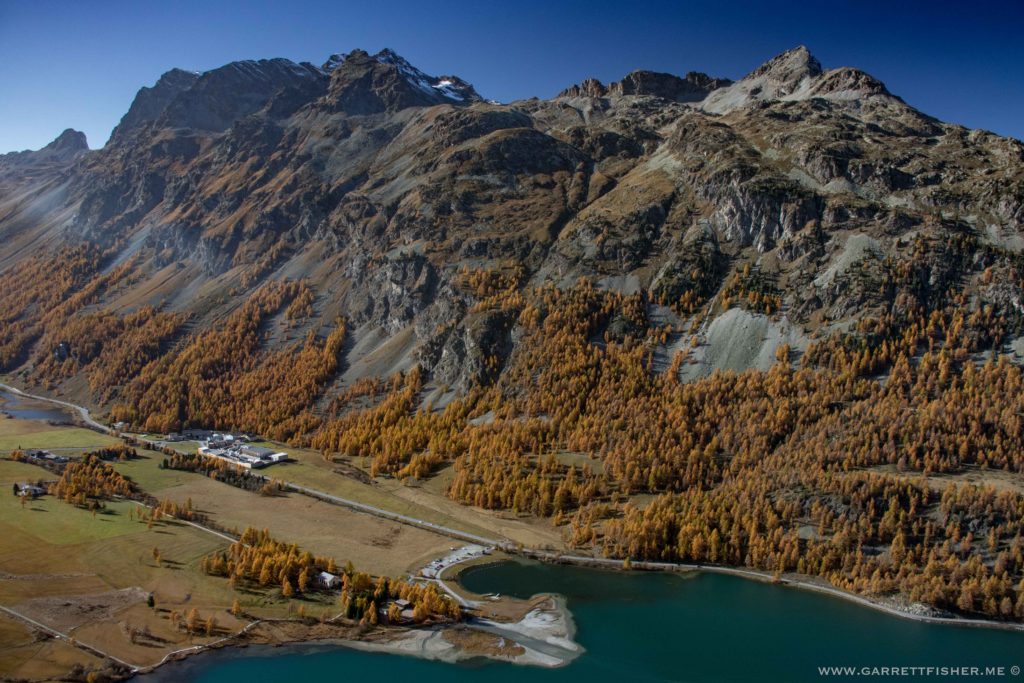 Back in the air after refueling. Opening of the Val Susauna. Romansch is spoken here. 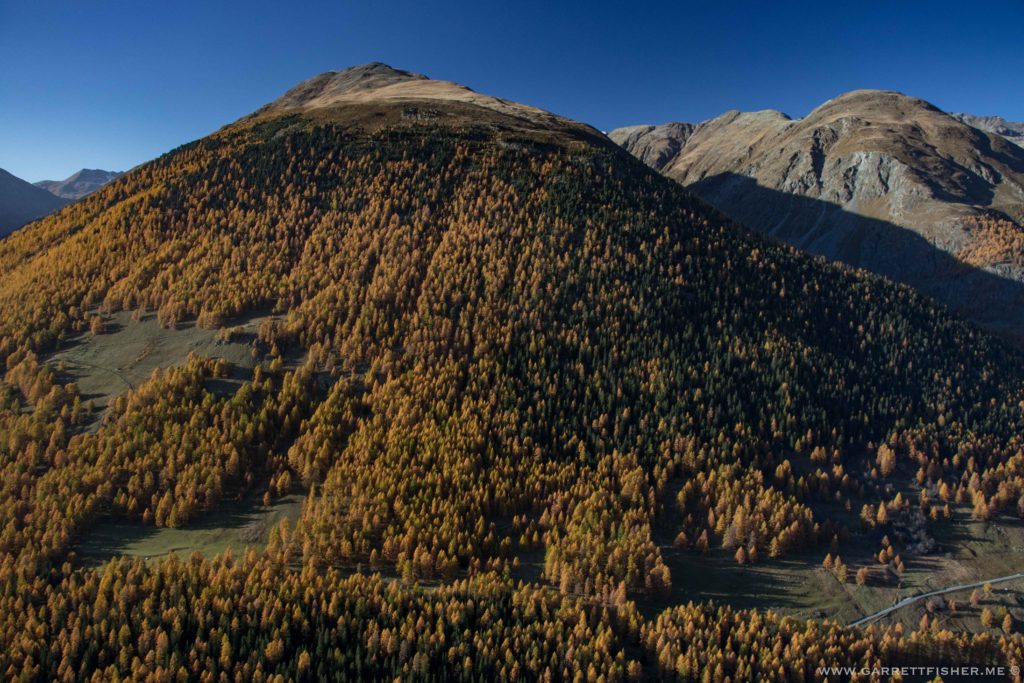 Round the bend at Zernez. 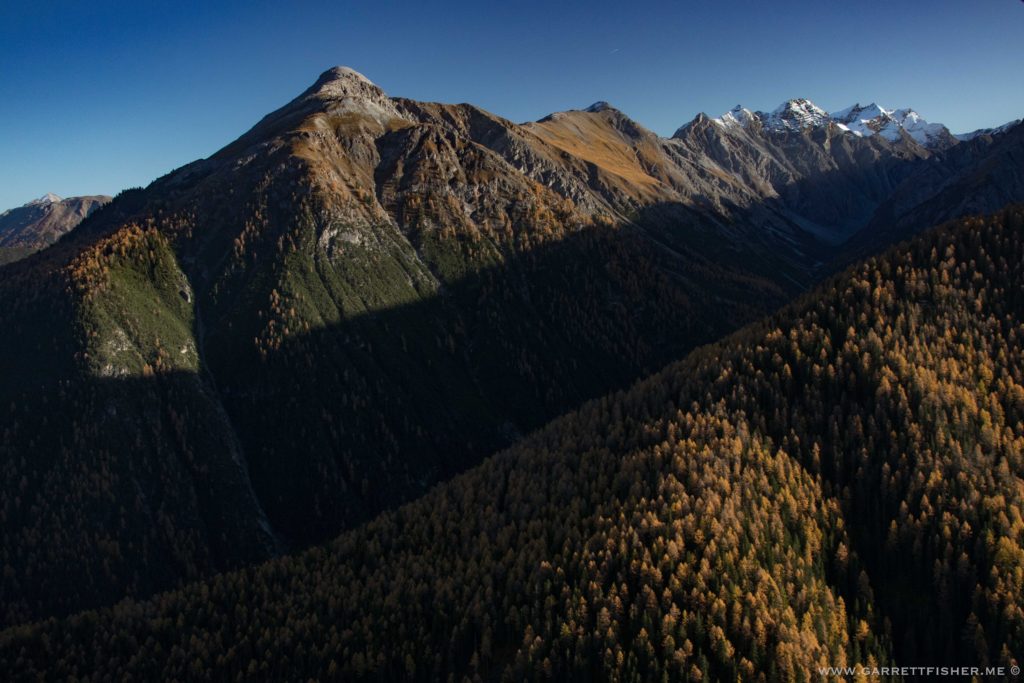 Piz Sampuoir. Reminds me of the Rockies. 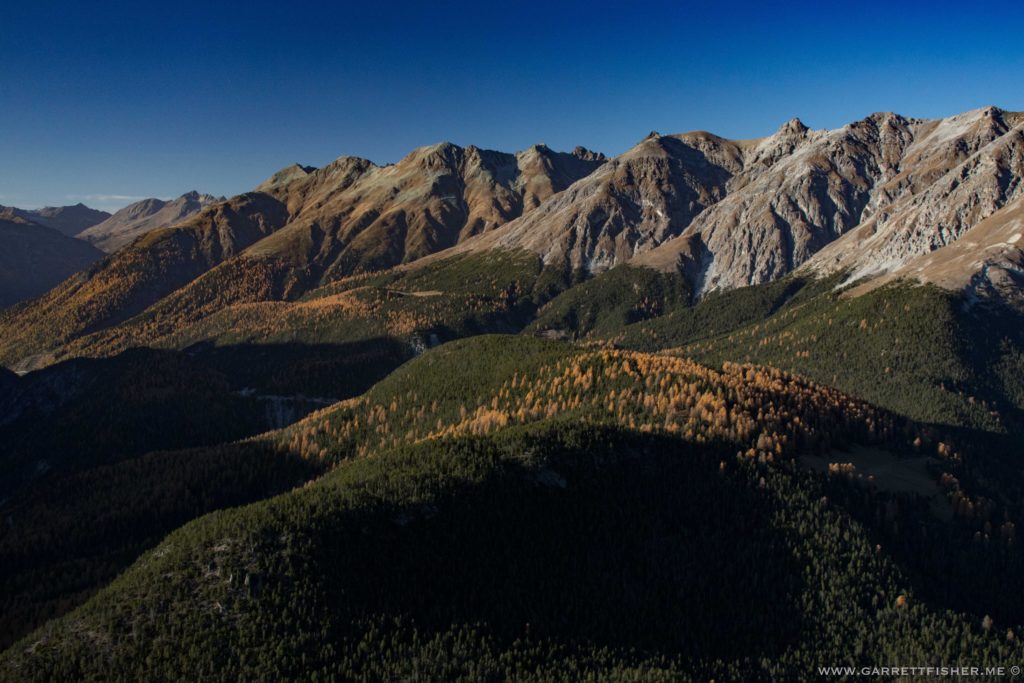 Above Burgusio (Italian)/Burgeis (German). Such is South Tyrol, where German is spoken in Italy. 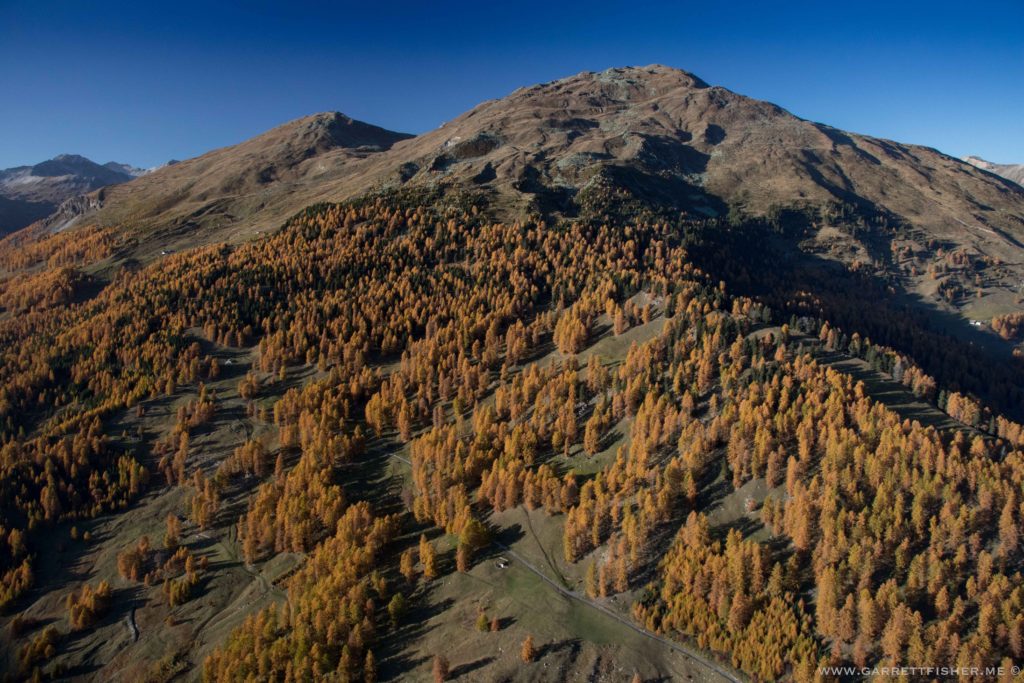 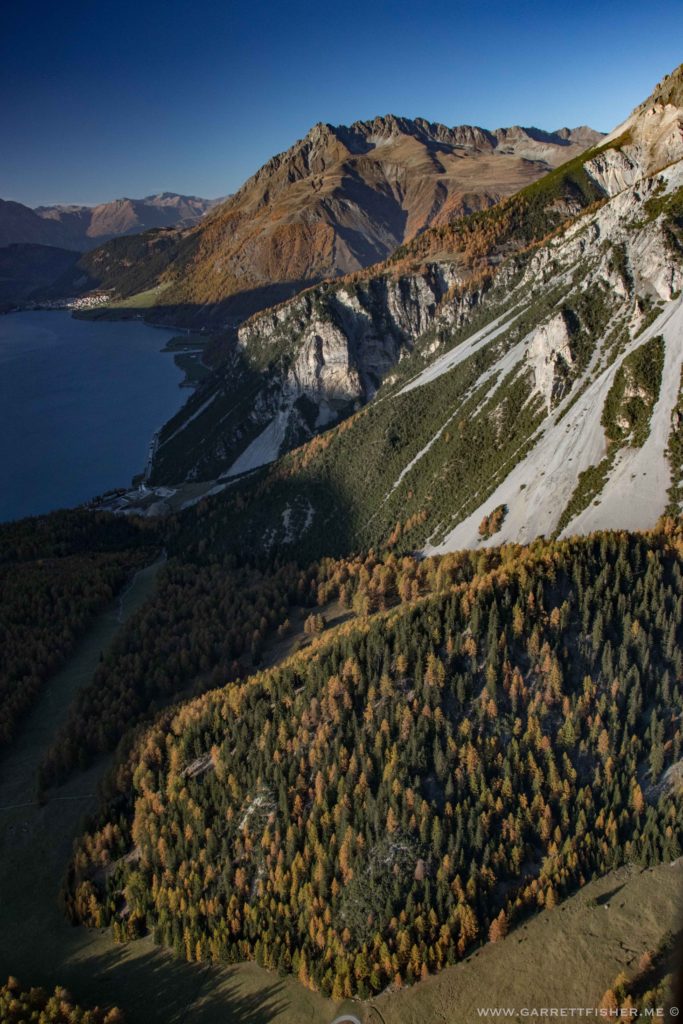 Österreich! The Eastern Kingdom is the 9th country for the Cub. 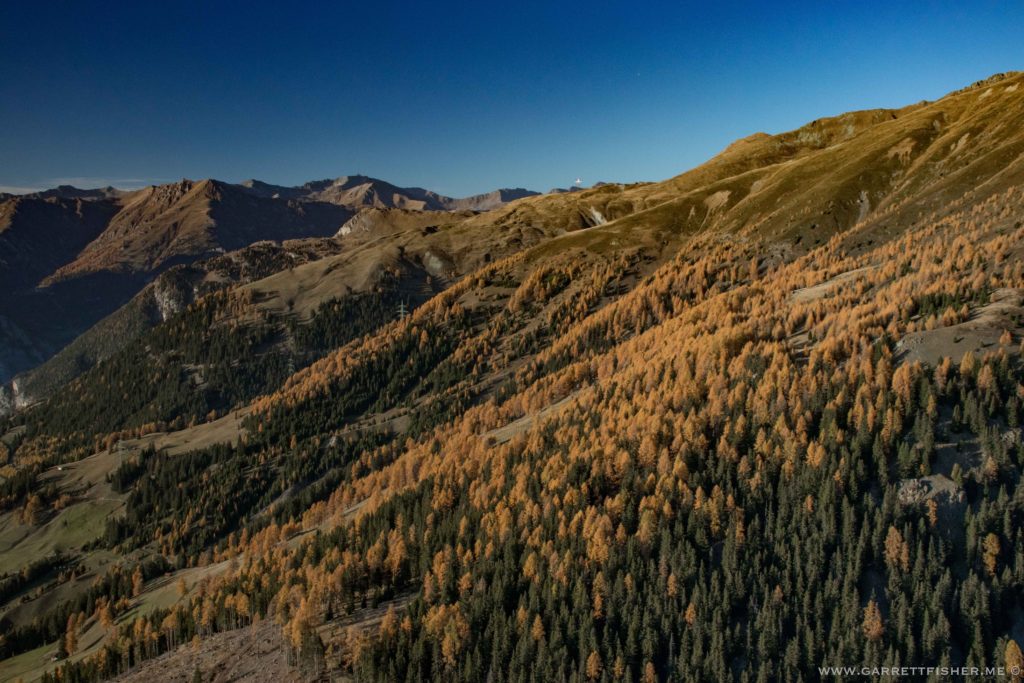 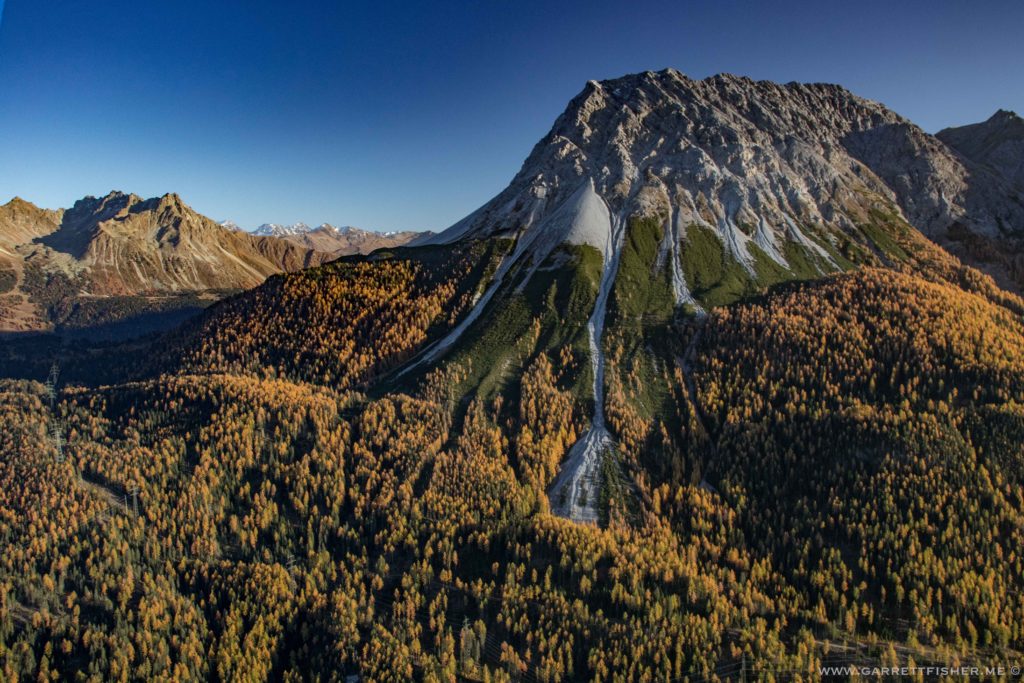 Scuol. My wife had to remind me that this is one of the weird towns that is exempt from Switzerland’s annoying “Mwst” VAT law. 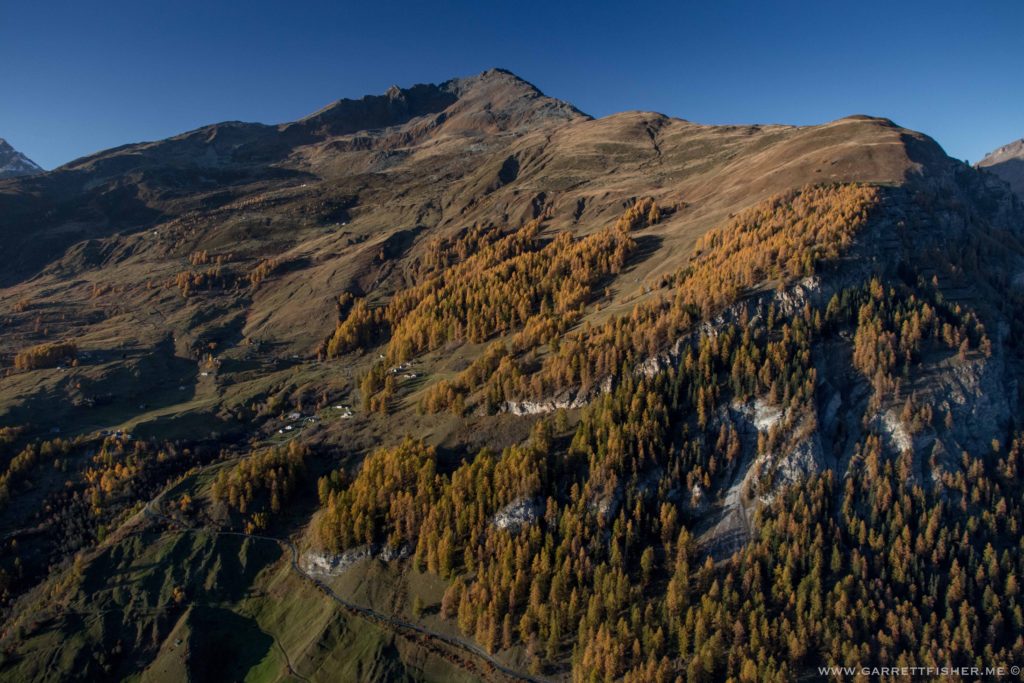 Back in the Engadin, where my camera broke. 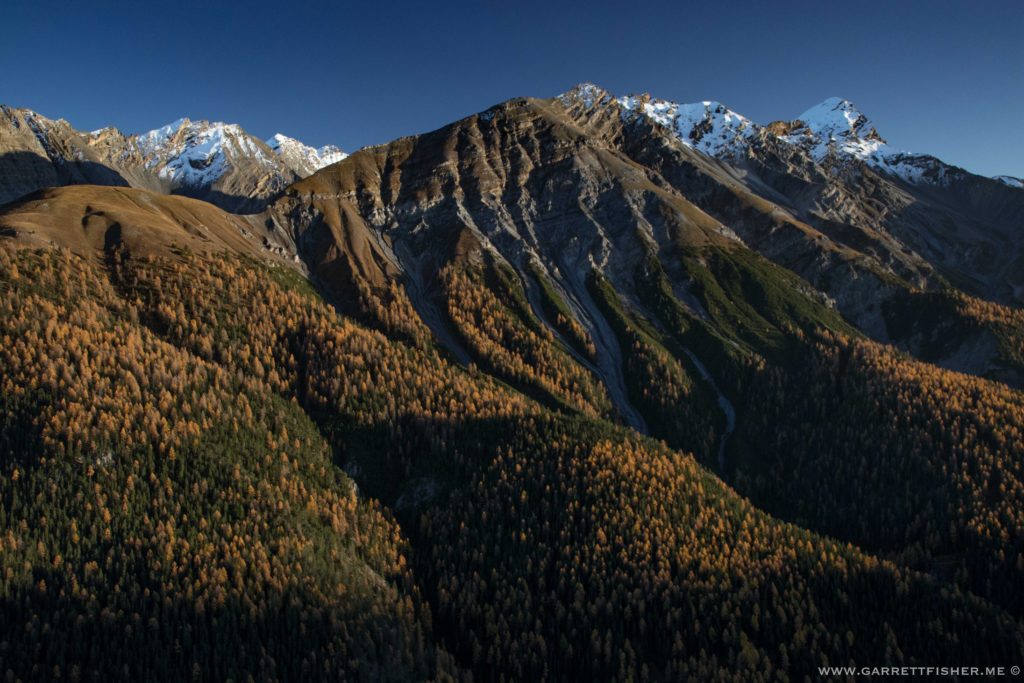 St. Moritz in the morning (backup camera). Once I noticed that the two peaks in the center look like breasts, I can see nothing else.

Julierpass. Bit of a washing machine wind-wise. That is turning out to be nothing new at key passes in the Alps. Get wiggled around for awhile and it quits. 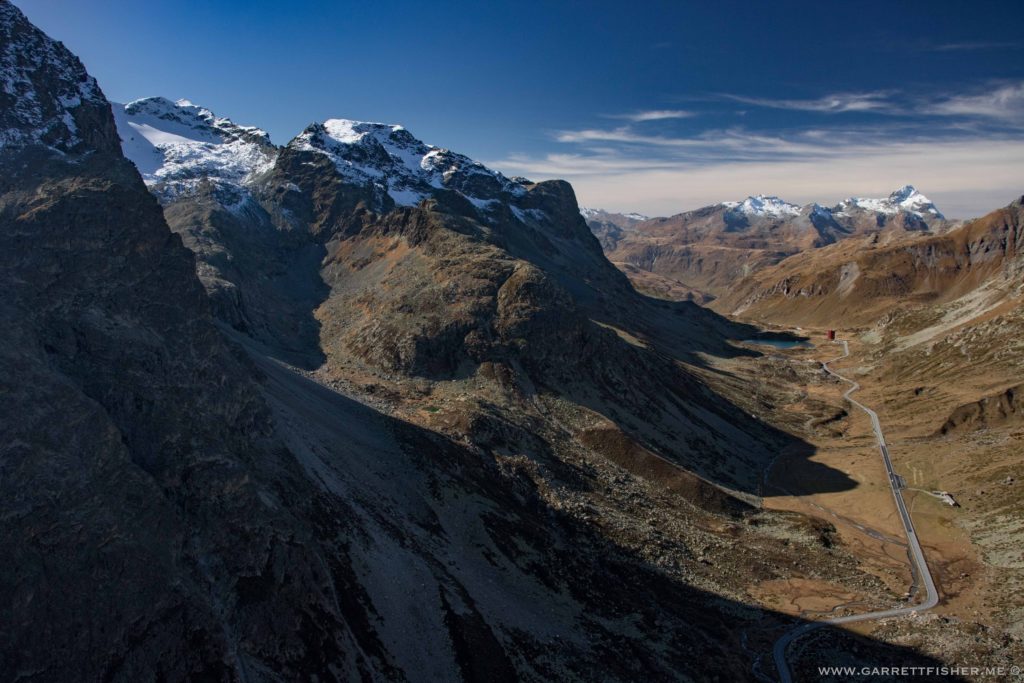 South of Laax. No larches here. 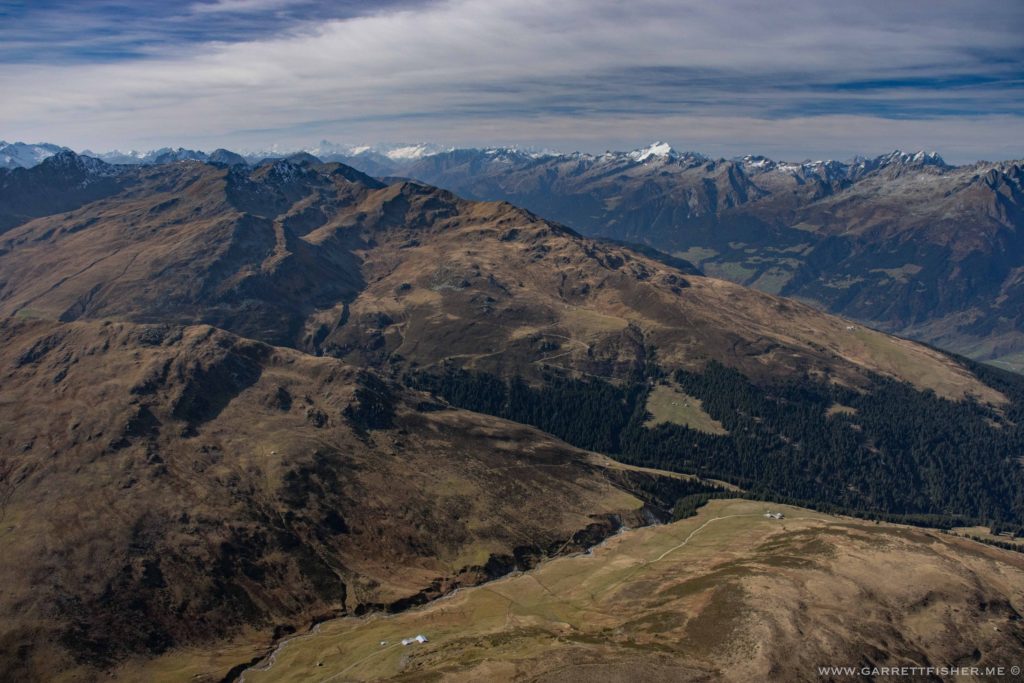 Above Disentis, which is usually windy on preflight briefings. It certainly was in the air as winds funneled from the valley to the south.

Over Oberalppass, on the Andermatt side. “Gutsch Andermatt” is another wind funnel on pre-flight briefings.

South side of the Goms valley again.

Whats left of the Oberaletschgletscher. There is actually ice in there, except its buried under centuries (or millennia) of rock debris that fell onto the glacier. 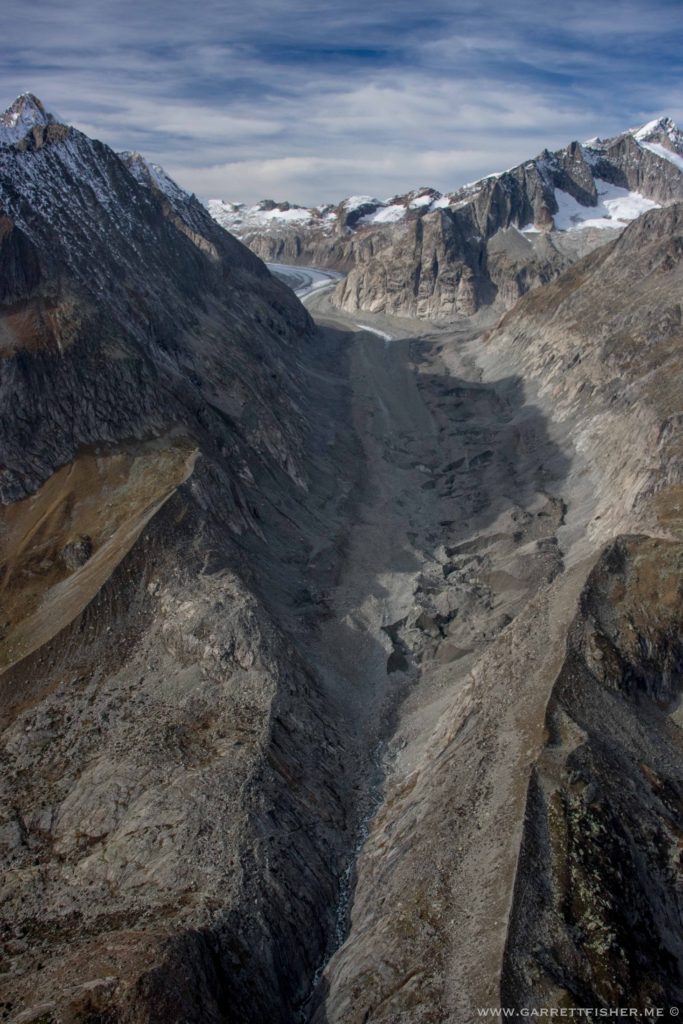 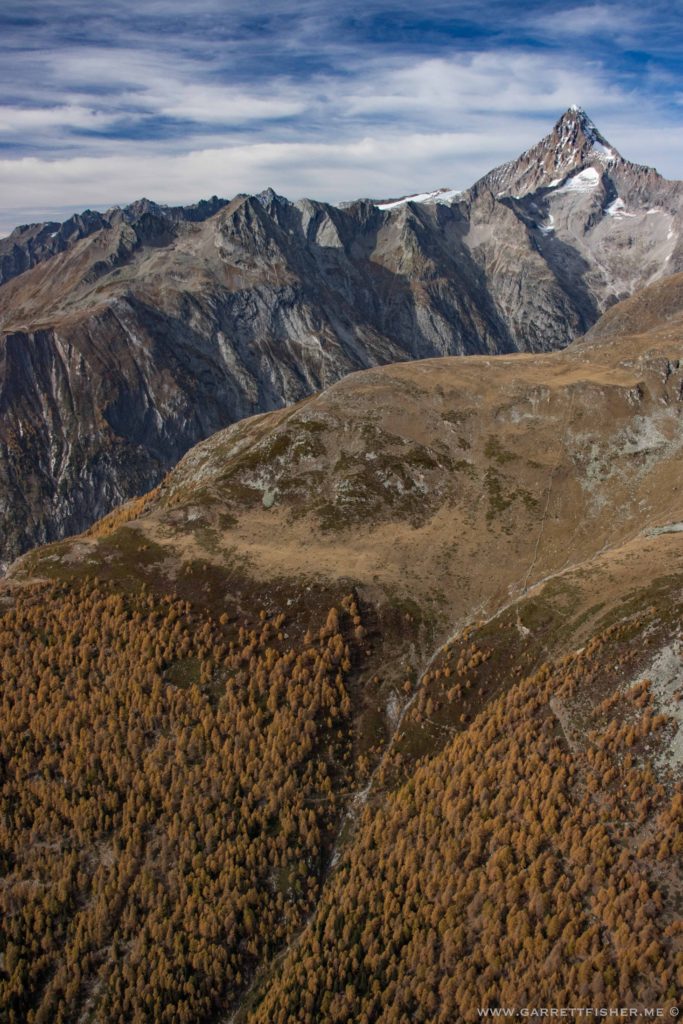 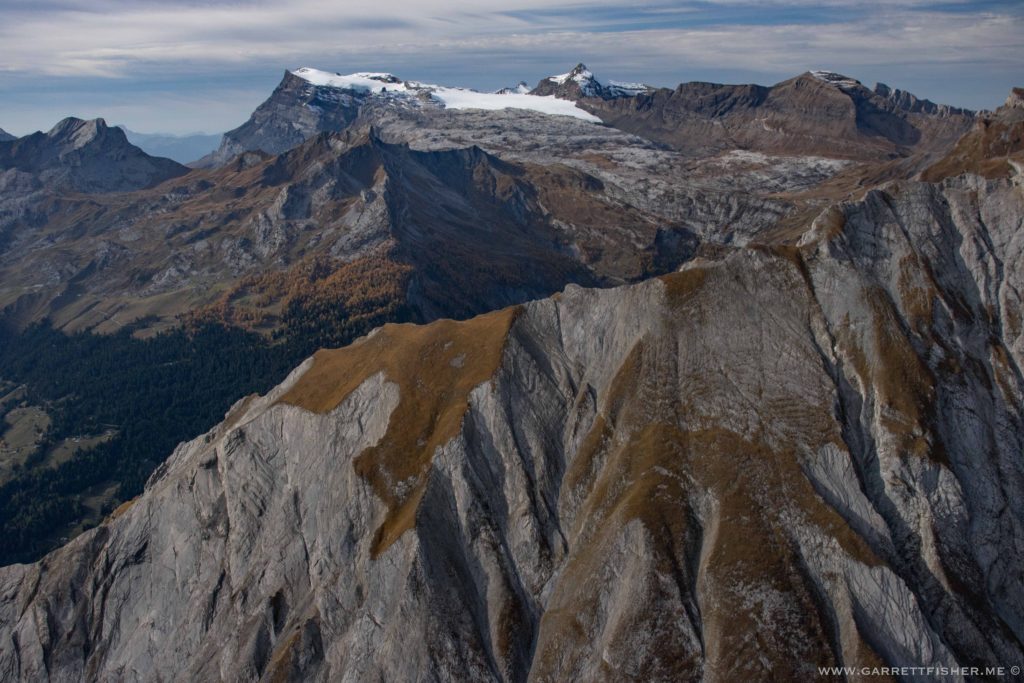 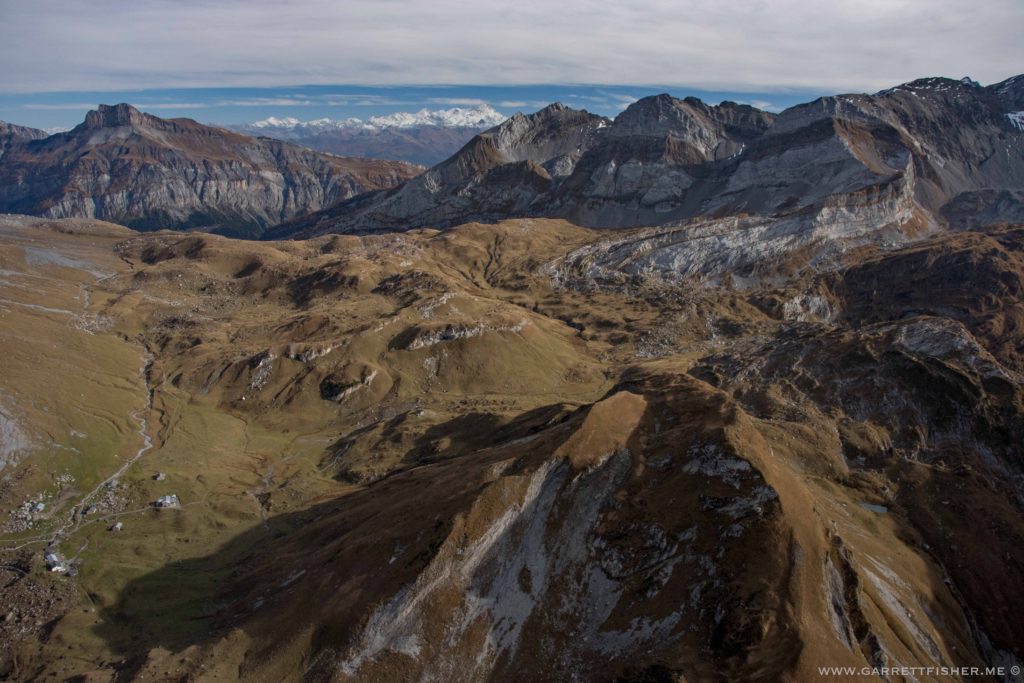