The story behind this flight began in January 2003. It was an unpleasant time in life as I found myself driving south on New York Route 16, from East Aurora to Arcade, in route to what may have been the most miserable term of employment in my existence. I was comforted by the fact that, after not seeing the sun for months due to continuous lake effect snow pummeling the area south of Buffalo, it was a resplendent clear day. To assuage the misery of my commute to the gallows, I tuned into CBC Radio 2 out of Canada, to listen to a cultural radio program. I wanted to give myself hope that life couldn’t possibly suck as bad as it did into perpetuity, or maybe I wanted to drug myself with the illusion that, if I was listening to above average intelligence radio content beamed from outside the United States, somehow rural backward depression in front of me wasn’t happening.

The program spoke of travels to Bern, Switzerland, the capital of the country. The presenter had spent an inordinate time in the old section of town, beneath the many “arcades” present in the city. While I was duly intrigued, it was a slap in the face that the place where I was serving my [purportedly voluntary] work camp sentence was….Arcade, New York. At any rate, I managed to not forget about that radio program and the associated ‘road to Golgotha’ now 17 years later.

The genesis of this flight was ultimately a need to go flying while solving the problem of boredom. “Boredom?” you might ask. The weather has been positively Pyrenean: weeks of relentless dry and sunny weather which, at first glance comes off as a gift, as the transition to winter on the north side of the Alps has the meteorological finesse of a raging Scottish storm. The problem then in Spain and now in the Alps is that mountains lacking clouds, snow, or anything interesting happening get really fatiguing after about 10 days. So…what to do? I negotiated with myself that I have two projects that I have wanted to work on, though have managed to avoid actually doing much about, at least with regard to the parts over the Swiss Plateau: the Aare River and the Saane River. The Aare departs from the lakes around Interlaken, flows right through Bern, and then the Saane joins it, which I decided I would follow in reverse back to the airport.

The flight over Bern was admittedly quite spectacular. The old section of the city is perched on a peninsula sticking out into a strong bend in the Aare River, high up on a cliff, with views of the Alps behind. The old city, with its over wrought “arcades,” is larger than Google Maps would have one think. The spire of the old church and the Parliament building, seat of one of the possibly only countries in Europe to avoid centuries of bloodshed, sits large and proud.

Bern ATC was rather cooperative to my requests to “follow the Aare River,” “perform continuous S turns,” and to orbit right over the capital multiple times. I am told by another pilot that I should consider myself lucky, and indeed I do, as many national capitals, the United States included, would rather not allow private pilots to circle overhead. Anyhow, the flight was very special, and I decided that it was time to visit the old city on the ground. 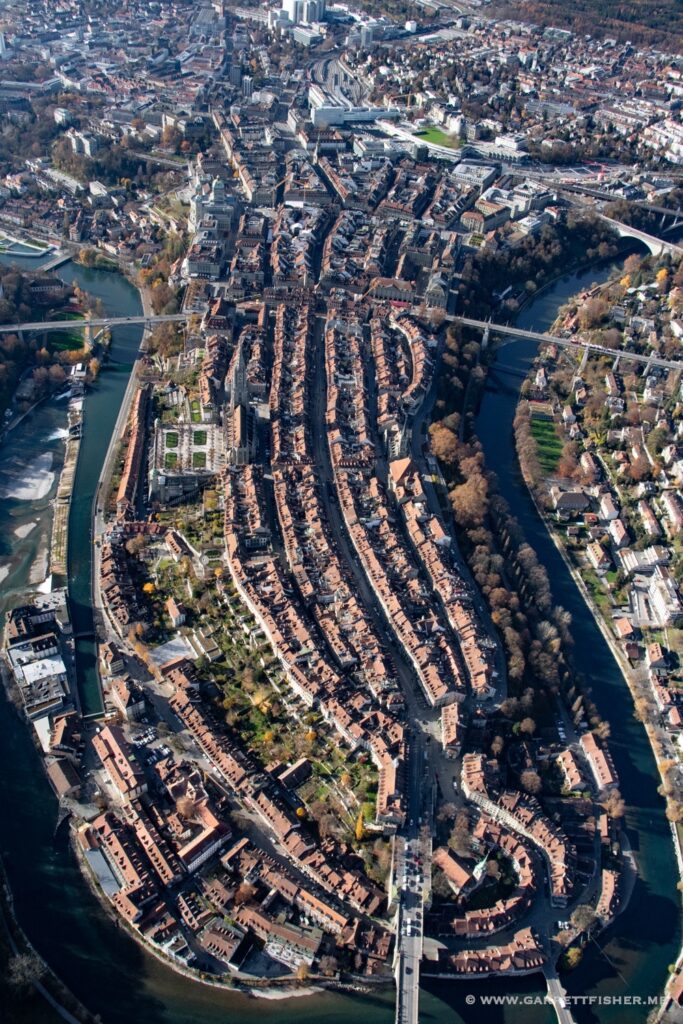 In the shadows at the base of the buildings, one can find the cockamamie “arcades” that have tormented me since 2003. 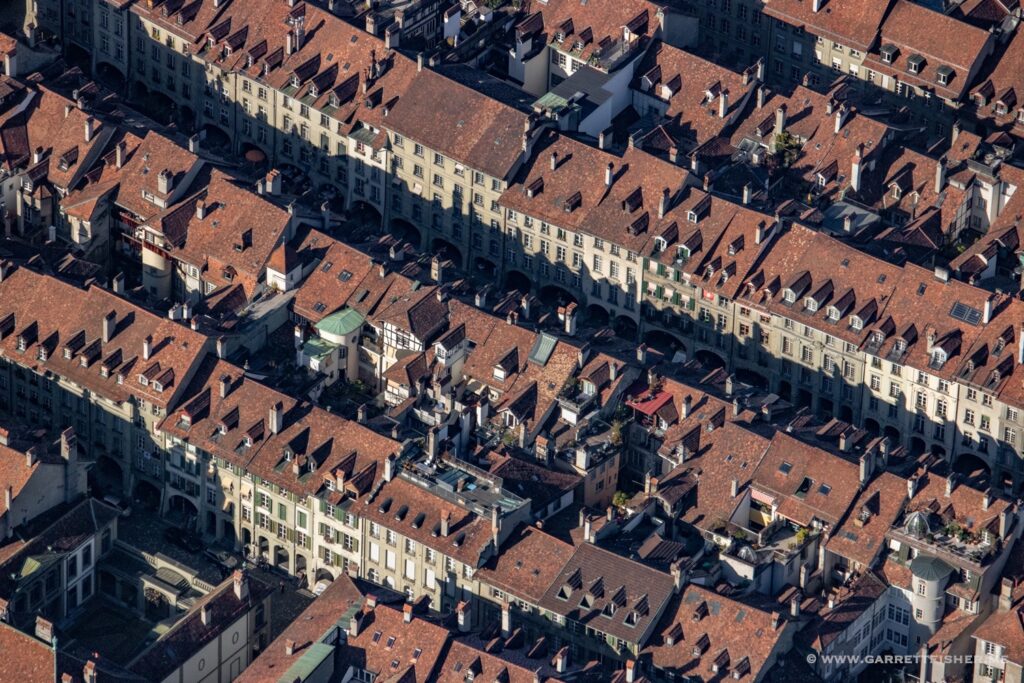 This is where the wheels come off the idea. I have had many people gush with some form of awe at the idea that I live in Europe. I realize where they are coming from; it is an exotic continent which has enough appeal that it seduced me to endlessly self-punish and move here, yet, as I told an acquaintance “nothing about Europe that you think is good is the reason we stay. It has all turned out wildly differently, albeit somewhat net positive, though for reasons nobody would expect.” As usual, people are surprised to hear this notion, though that would make sense. Is not everything that I have written thus far confirmatory of the European illusion, from the depressing misery of wintry, rust belt, rural Americana to the illustriousness of flying an old airplane over top a beautiful old capital?

Prior to COVID, I had anticipated riding the train into Bern, as it looks too chaotic with a car. Given that the pandemic should reduce traffic coupled with the fact that I did not want to wear a face condom (mask) on the train, I made the ill fate decision to drive.  What first greets a person when entering from the west is nothing short of a ghetto. The outer section of the city, at least where I was driving, was positively gross, which is admittedly not that unusual. Most European cities, including the ones of the Disneyland/once-in-a-lifetime/oh-honey-we-must-go-there/tourism sort, are surrounded by filth. “No wonder they hate foreigners,” my wife quipped.

As we approached the train station that we would have ridden in on, it was total chaos, with cars and people everywhere. Apple Maps sent us the wrong way, which turned into a fiasco much like driving in Manhattan. By the time we were done nearly getting into multiple collisions, we inched our way toward the old city. My plan was to just find a parking ramp and deal with the annoyance of it, instead of illusions of that perfect parking spot in front of one’s destination. Well, there was no parking ramp, so I followed the one-way streets, driving ever so slowly, snaking our way past Starbucks, through a crowded giant square, and then promptly getting ejected from the old city. The place was swarming with people and cars, and nowhere to park them.

I turned toward the terminus of the old city peninsula, where it was evident that there was neither a parking ramp within 2 miles, nor a parking spot. We were taken down to the river, across it, and out of the area we wanted. “Just get out of there. This is nuts,” my wife said. “Oh no, we don’t! I drove past a Starbucks and I will be damned if I don’t go!”

That resulted in another two miles of driving, this time through a totally unmarked intersection where six lanes converge. No traffic lights, no signs, no yield, no stop. Just standard Swiss rules where the person on the right as the right of way, although bicycles weren’t keen on listening. After some horn honking and restraint with the middle finger (illegal in Switzerland), it was over the bridge back to the old city, which revealed that the two parking ramps were full, with 10 cars in line, simply waiting until someone exited the parking ramp, so they could go down multiple stories into the bowels of hell to drive in circles and ram their car into a spot that is too small, followed by walking two miles to the old city to invariably stare at quaint [closed] shops while contracting COVID.

By this point, I started just driving…anywhere but where I was. Finally approaching what appeared to be a key intersection, I was still hell bent on doing what I drove 90 minutes to see, and my wife ever so kindly demanded that I “get the hell out of here or take me home, now. I don’t care!”

Presented with Fribourg and Interlaken as options on the road sign, I made a flash decision toward Interlaken. Some minutes later, we were on an expressway, with the Jungfrau in the background, me ranting and declaring that “I am never going to visit a city again, ever!”

Out of instinct, we went to the nearest place with a positive memory, which is Schloss Schadau, an illustrious Biltmore style castle on Lake Thun, with the Alps in the background. We had been there a week before, as I discovered the place from the same flight. This time, we decided to get something to eat inside, for which we were seated at a table with a view of the lake and the mountains.

Schloss Schadau, inconveniently blocking the view of the Jungfrau behind it. 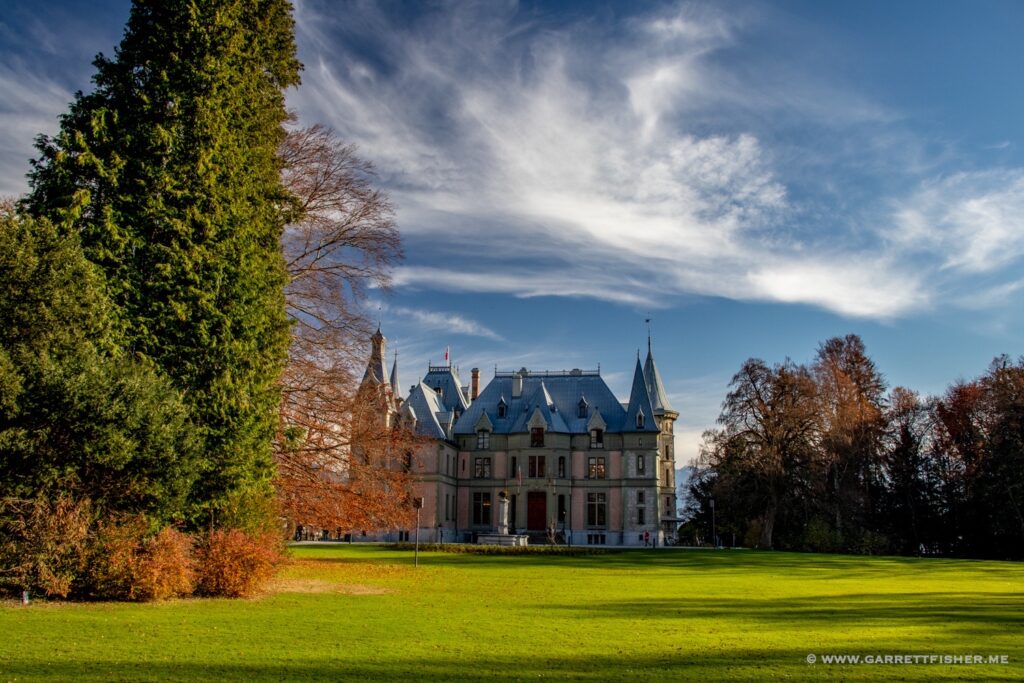 View from my table, with the Jungfrau in the background. It is an iPhone shot with minimal retouching and looks like a fairy tale. 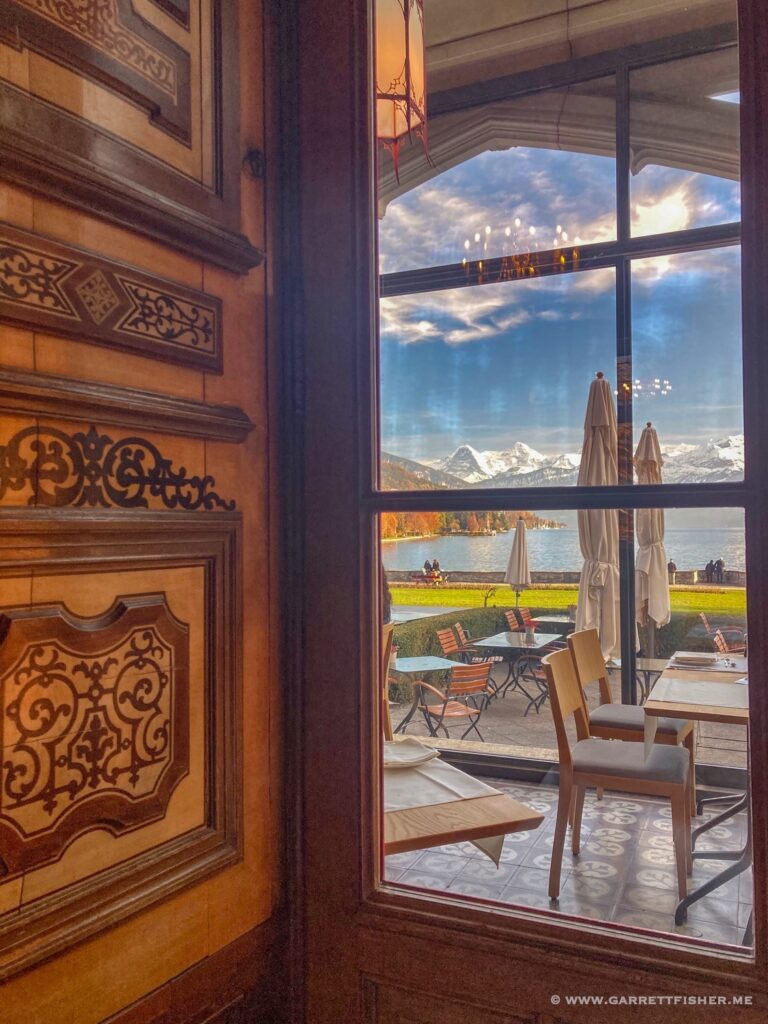 “This view pisses me off.”
“Why?”
“Because it is so pretty, which is just a slap in the face after the dehumanizing experience I just had. I just hate that if I share this with anyone, the experience in Bern cannot go with it. Everyone will just think it is ‘just wonderful’.”
[No response]

After consuming fish and chips ($78), said pile of fried food in my stomach revealed that I must have had low blood sugar, as my bitch fit entirely abated. Gazing at the famous peaks of the Eiger, Mönch, and Jungfrau from my table, I said to my wife, filled with warm fuzzy feelings: “It is hard to believe that just 3 days ago I flew over the summit of the Jungfrau. See that illuminated ridge, that is the one where I sent you the video flying right by it.”

“I didn’t watch it.”
“What?”
“You sent me two. The first was good enough.”
“Seriously? The first one was from the Jungfraujoch. The second was sideswiping the summit.”
“What do you want me to say? I got the idea from the first one.”

The video she watched.

The video she didn’t watch. “Mountains. Seen one, seen them all.”

Summit of the Jungfrau, also visible from Schloss Schadau (albeit at a distance). 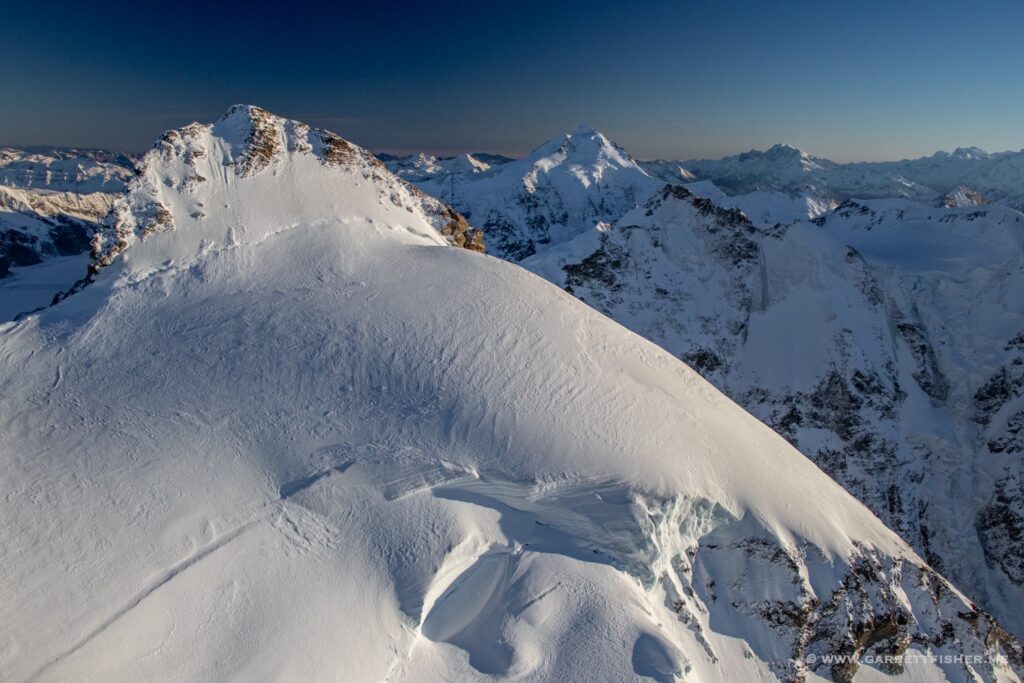 Jungfraujoch. Schloss Schadau is at the far shore of the lake in the distant center of the image. 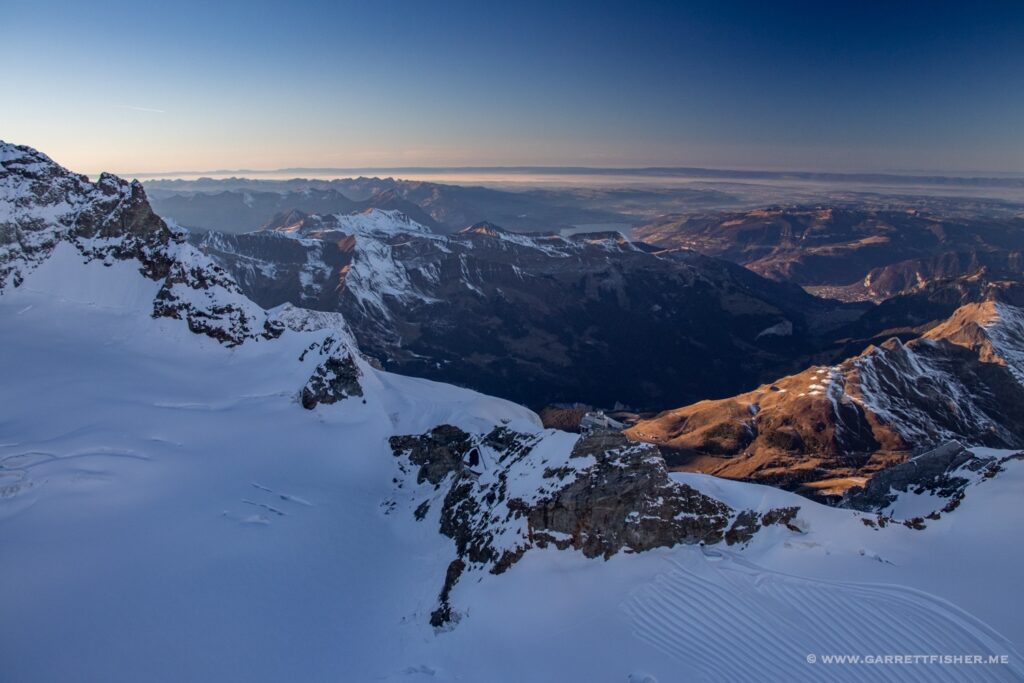 At our belated lunch, my wife ordered Moroccan mint tea, a favorite after discovering it at some freakish hippie joint in Vancouver, Washington some years ago. At the exit area of the grand lobby, I noted that tea boxes were for sale, for which she grabbed one. I thought I heard the price, and after we got in the car, I asked “What did that run?”

The Swiss are a kind culture. Even if you’re a foreigner that does not speak their language and you arrive in their country, burdened by the obligation to have liquid assets, whether paper bills, coinage, or money in a bank anywhere in the world, the Swiss very kindly will drop everything and aid anyone that is beleaguered with the fatigue of possessing it. They dutifully will take it from you and then you don’t have to worry about having money anymore!

We’re used to it, which meant that, after savoring some of the [expensive] and illustrious tea, we ordered other flavors, which arrived in a box 19 hours later, one of the advantages of paying 4 times the normal price. It is admittedly rather good.

The whole trip is representative of many dimensions of our European journey. Going back to 2003, I was fantasizing in delusion about the “arcades of Bern,” came here with an airplane, drove myself to the point of both insanity and an automobile collision, left without seeing the damn arcades (or the old city for that matter), had a positively memorable lunch, where we could discuss my recent wanderings, flying at nearly 14,000 feet over the Jungfrau. The experience so far has been very similar the journey to Bern: a mix of transcendence and scathing fury, so yes, come to Europe. It is both like a vacation to Disneyland and Afghanistan at the same time.