It’s not like I haven’t been here before with the Cub. When I was a student pilot, I took the airplane to 7,500 feet, came home, and told my parents about it proudly. My father’s response was, “DON’T EVER DO THAT AGAIN!” My reply to his little tantrum was to take it to 14,000 feet the next time I went flying. There I was, overhead my grandfather’s airstrip at 1,280’ elevation in upstate New York, above incoming airliner traffic to Buffalo, with no radio, looking north of Toronto Canada 75 miles away. I was 16.

Perhaps that moment could have been highly instructive as to how I ended up here a bit over 20 years later.

Anyhow, not too long after moving to Colorado, I took a flight in a snowstorm at 12,000 feet over Fremont Pass into Leadville, to move the airplane to the highest airport in North America at 9,927’ elevation. Two flights later, I was cruising around at my present altitude record: 16,300’, with a passenger.

Now, connect that to 300 hours of flying in the high country of Wyoming, Montana, Idaho, and Utah, to hundreds of hours in the Spanish and French Pyrenees, and I somehow got my undies in a bunch about flying in the Alps. Granted, Mt. Blanc exceeds the highest peak in Colorado by 1,400’, but it’s not like I haven’t gone higher.

There is the matter that I would be starting in Sion at 1,582’ instead of at 10,000’, though refer to my teenage miscreant misadventures, and clearly the airplane could do it, even though I hadn’t figured out the mixture control at the time, so the engine coughed and sputtered its way to 14,000’. I would eventually figure out on my first takeoff run at 5,400’ in Boulder, Colorado that the engine needs to be leaned at high altitude, as I was rotating for takeoff with a curiously partially operative engine. “Maybe if I pull this lever a bit.” [engine roars to life] “Simple enough. Rockies, here we come!”

Anyway, I digress. What is the point? My ass has gotten a bit bigger. You know, middle age (it’s all muscle, I swear). That has lent to a nagging suspicion that a quick jaunt to 16,000’ might be a bit more complex. It was with such a fear that I chose a hot day in late June in Spain to make a detailed record of how long it took to climb from 3,609’ to 16,000’. 56 minutes. And then somebody crashed a plane and I got distracted jumping in to help confirm the wreckage location (he survived), so that supplanted non-emotionalized data consideration (okay, okay, I am just convoluting the large ass thing).

It didn’t help that an astonishing 28 people died in airplane crashes in the Alps in the week of my arrival to Switzerland, inclusive of another crash in the vicinity of Sion, while I was in the air (again). Nonetheless, if one wants to fly around mountain peaks, getting in and figuring it out is the most expedient way. As the pictures will show, I was just being a wimp and its fine.

Climbout out from Sion, wondering how this all is going to work. Rhône River below. 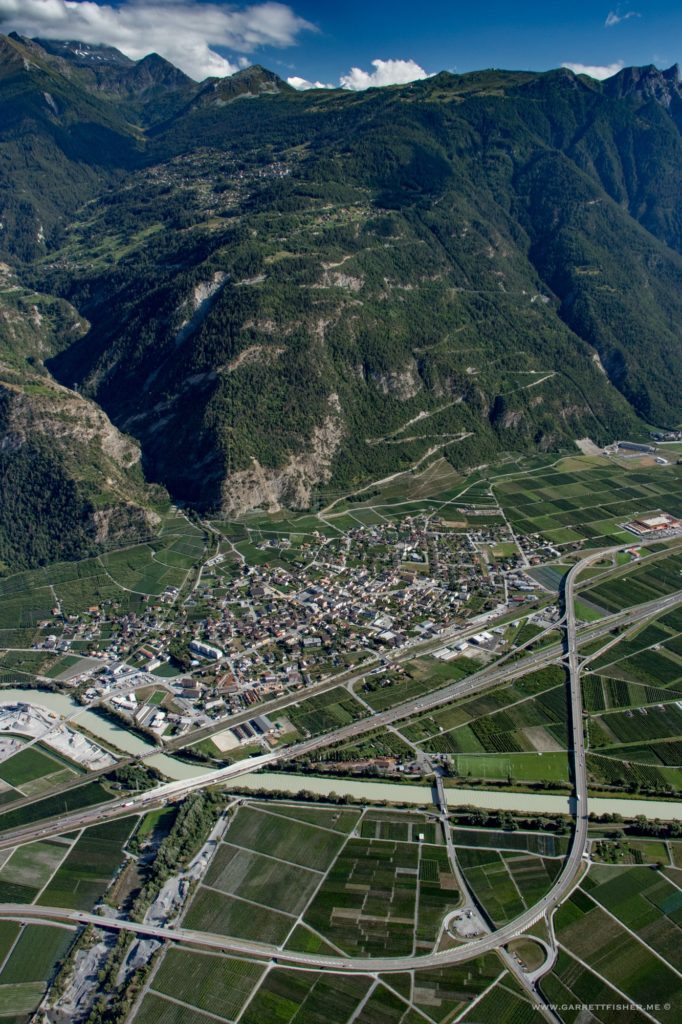 At this moment, I was fairly certain I would end up above the clouds. Sembrancher lower right. 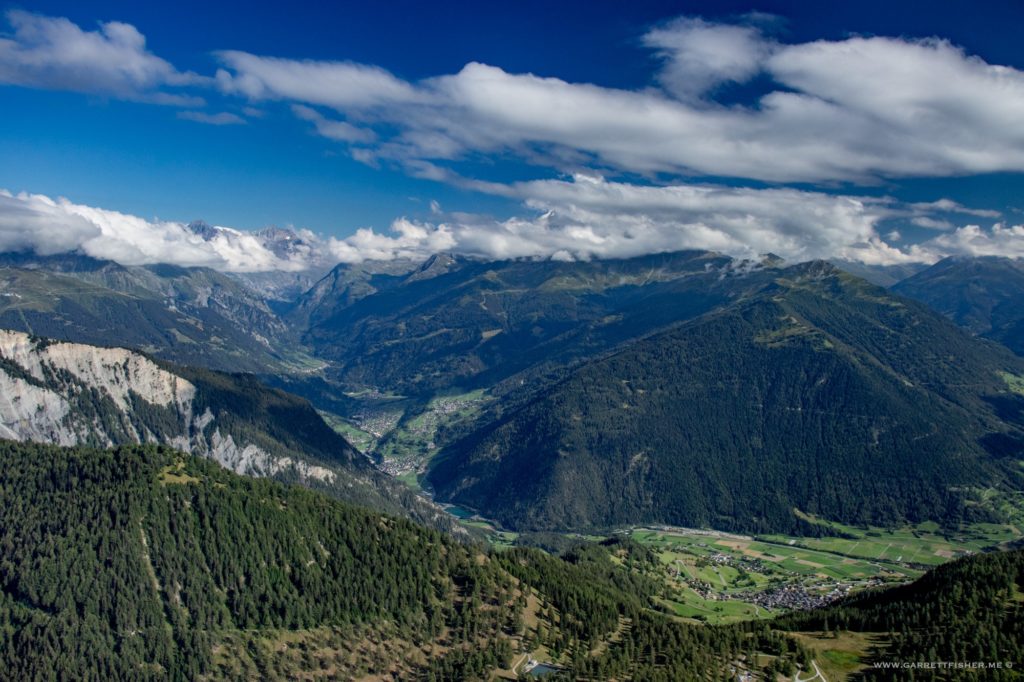 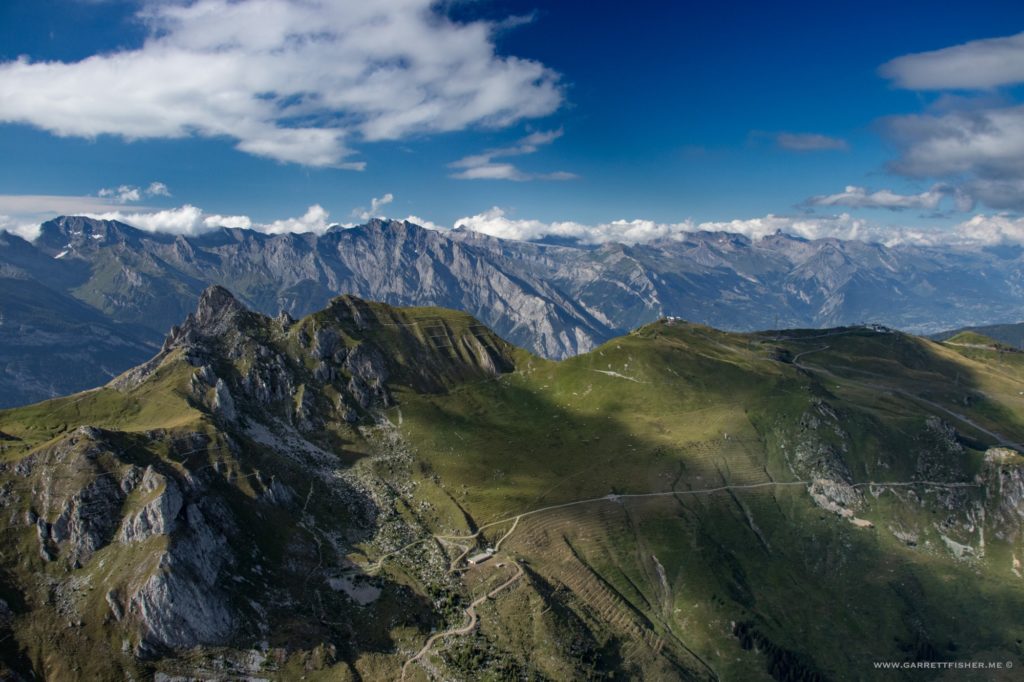 Absolutely heading above the clouds. 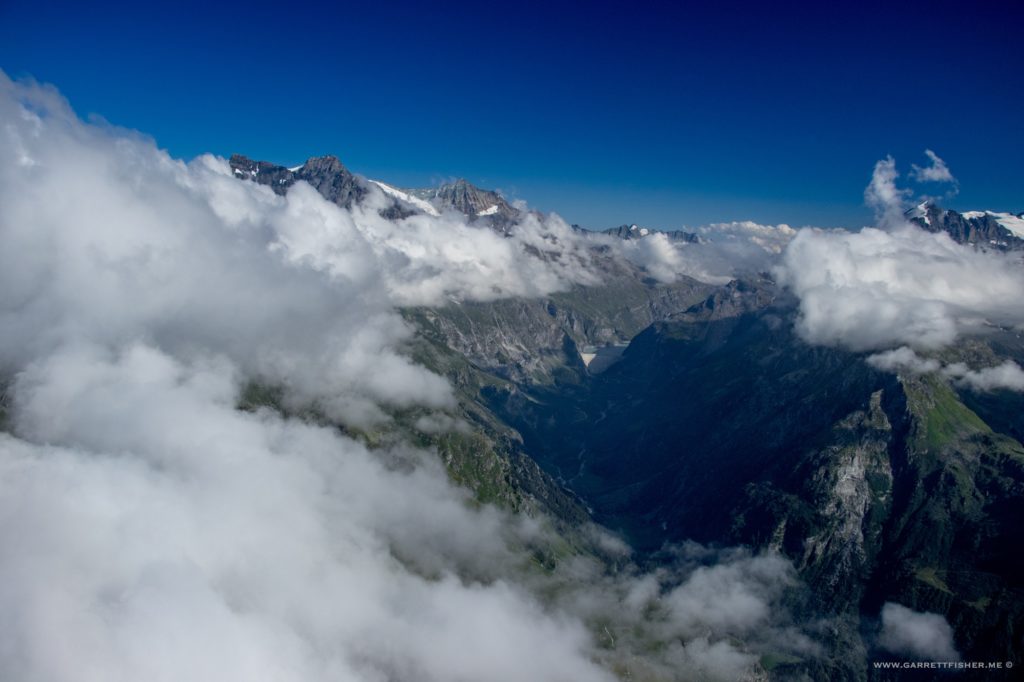 In the Pyrenees, this would be impressive. Switzerland, its the warmup exercise. 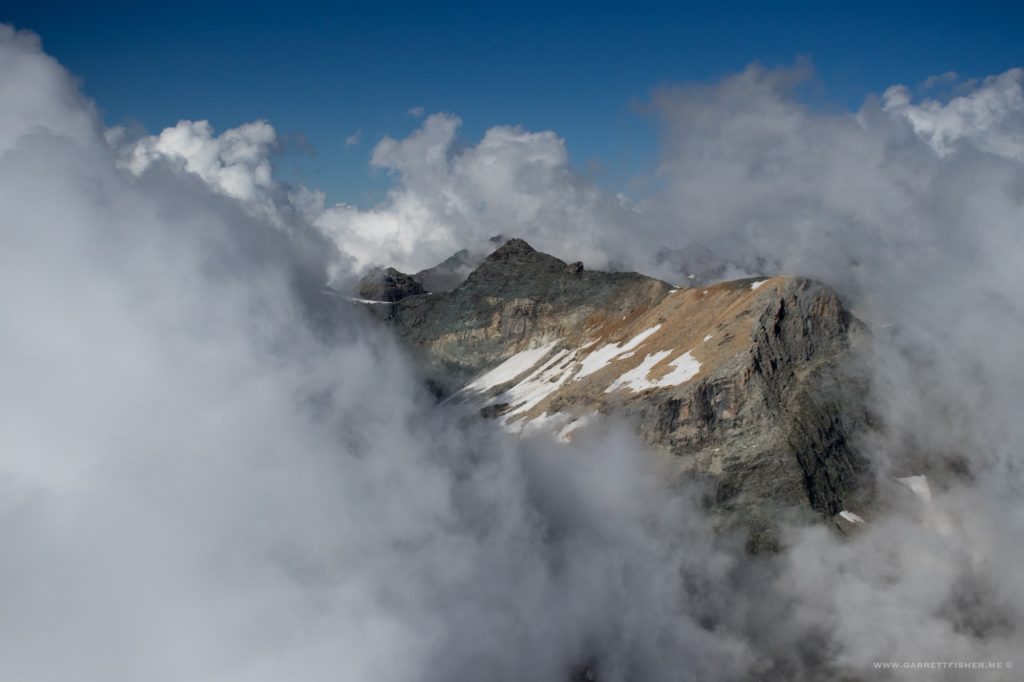 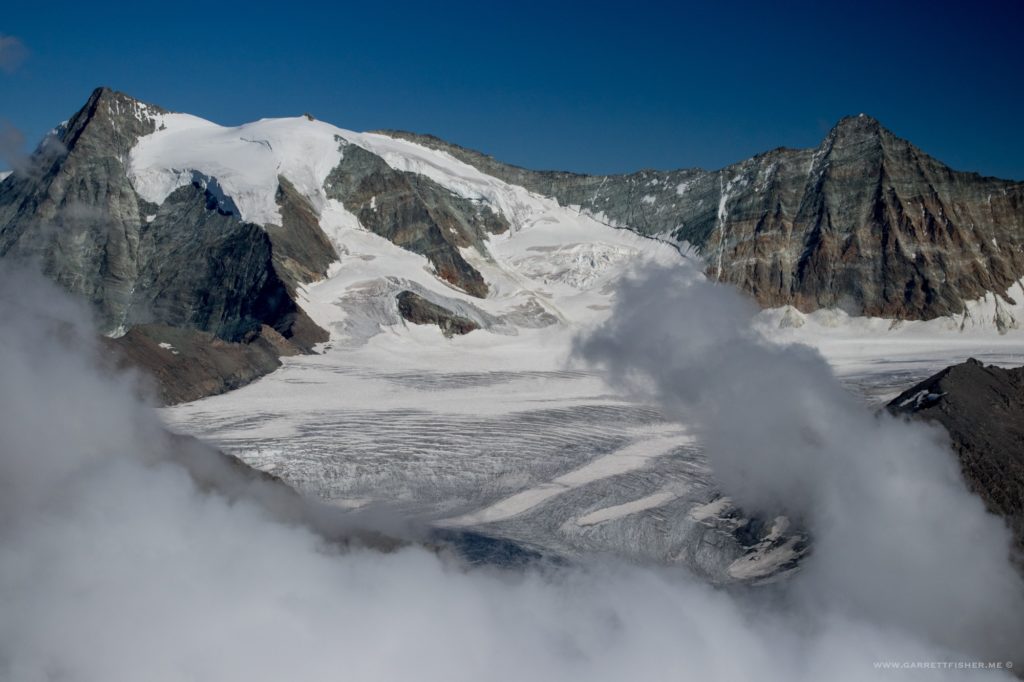 …even if it involves some creative flying. 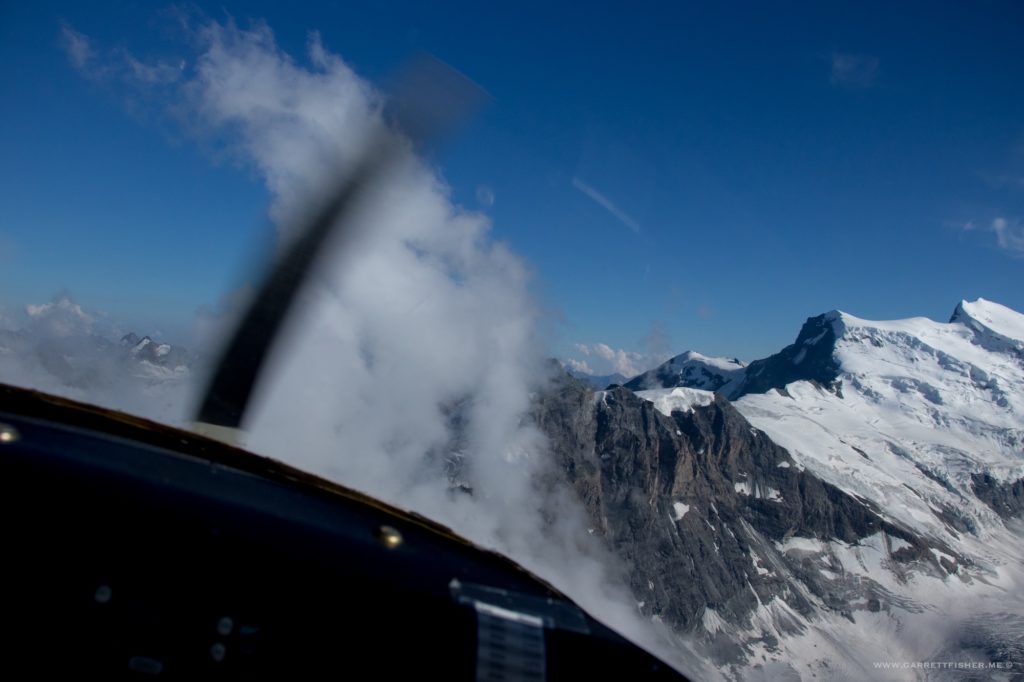 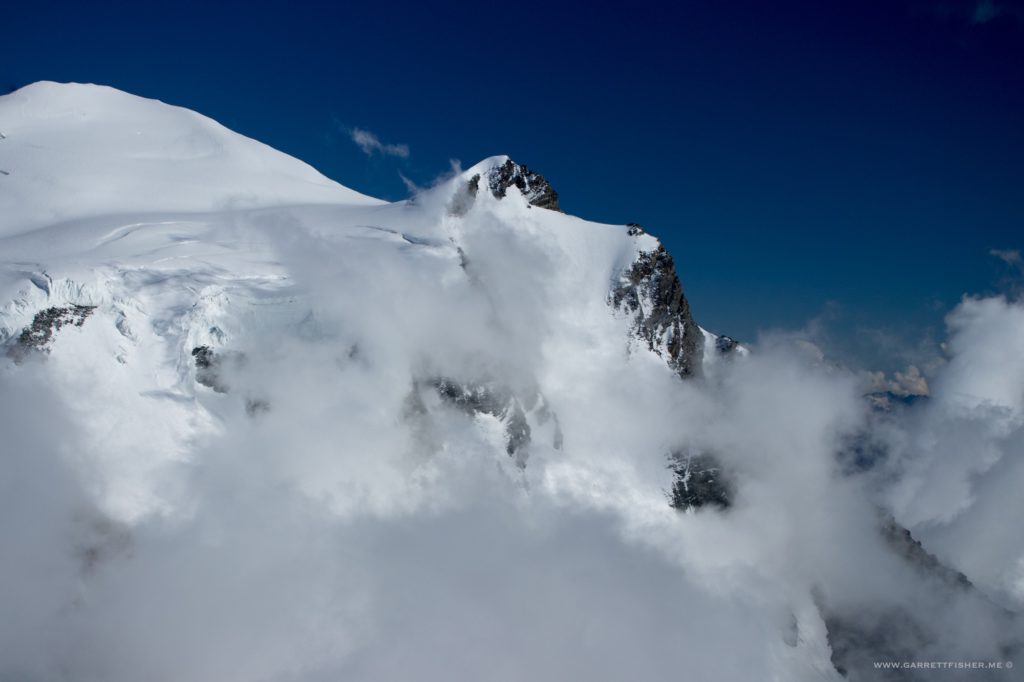 Mont Vélan, with Italy lurking in the background. On this side of the line, they hoard cash. On the other, they spend it (and everyone else’s), threatening to take the Eurozone down with them. Its amazing what a mountain range will do to the development of culture over millennia. 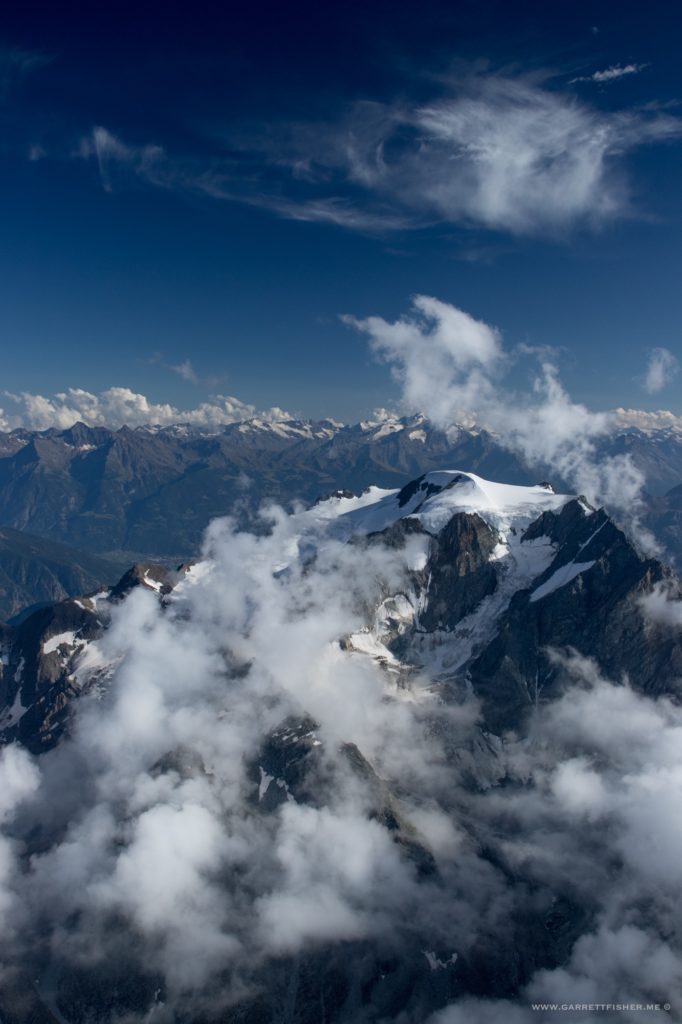 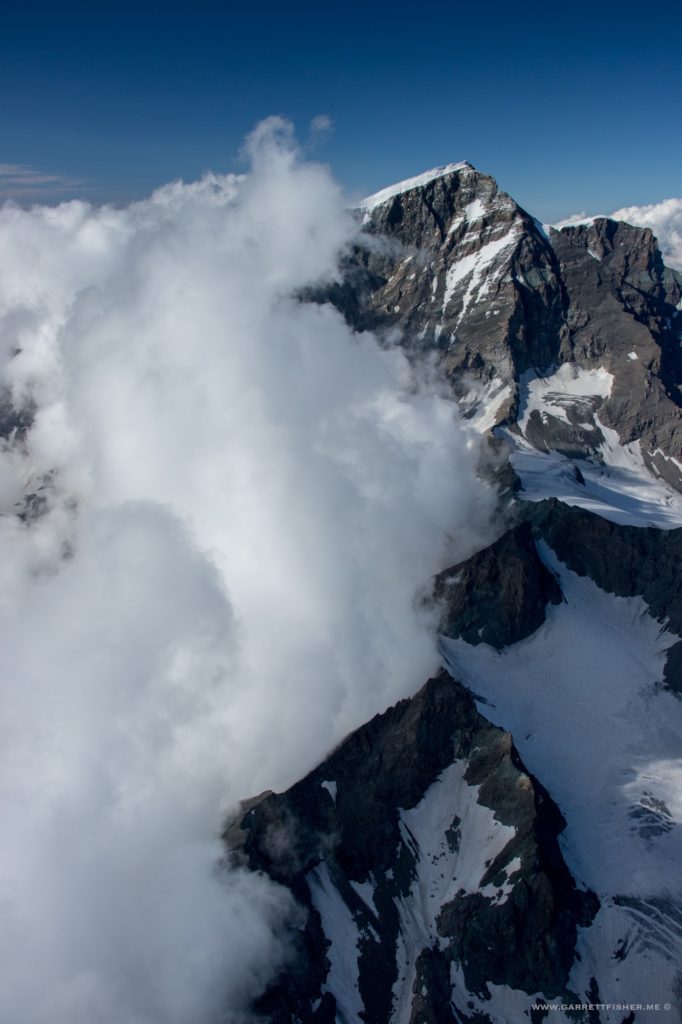 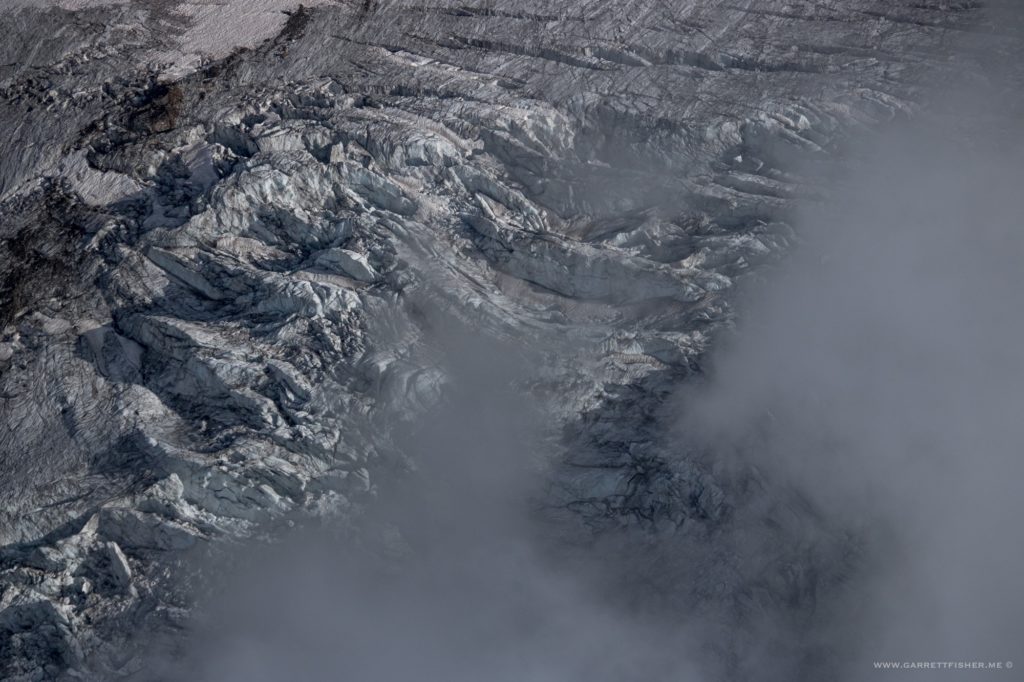 Some glacier in Switzerland, looking at Italy. At this point, I was somewhat starstruck with glaciers everywhere I looked. 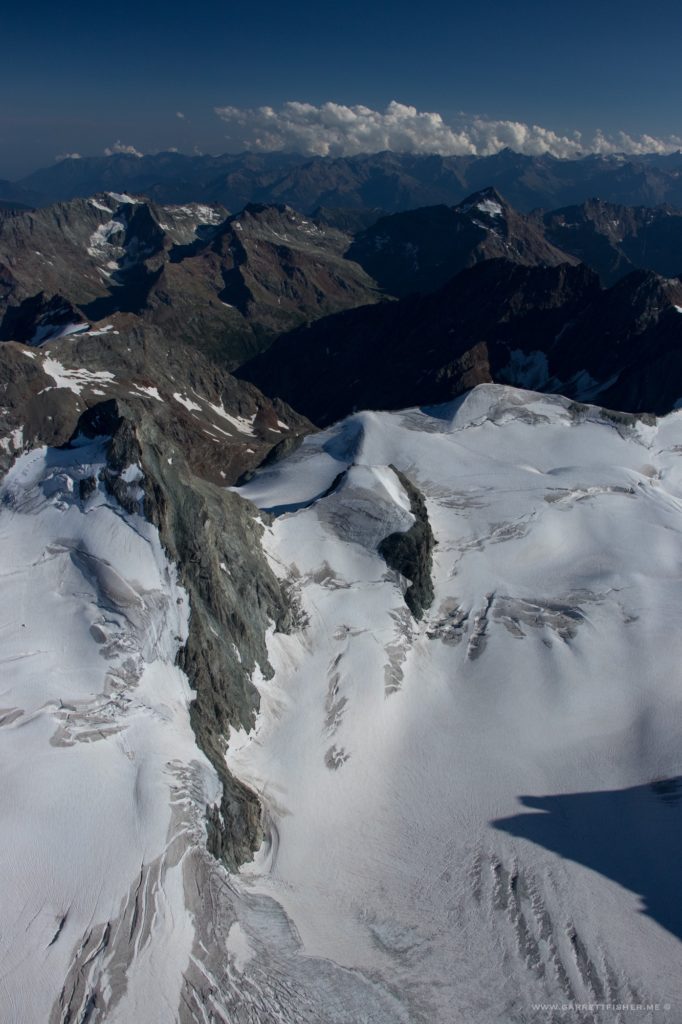 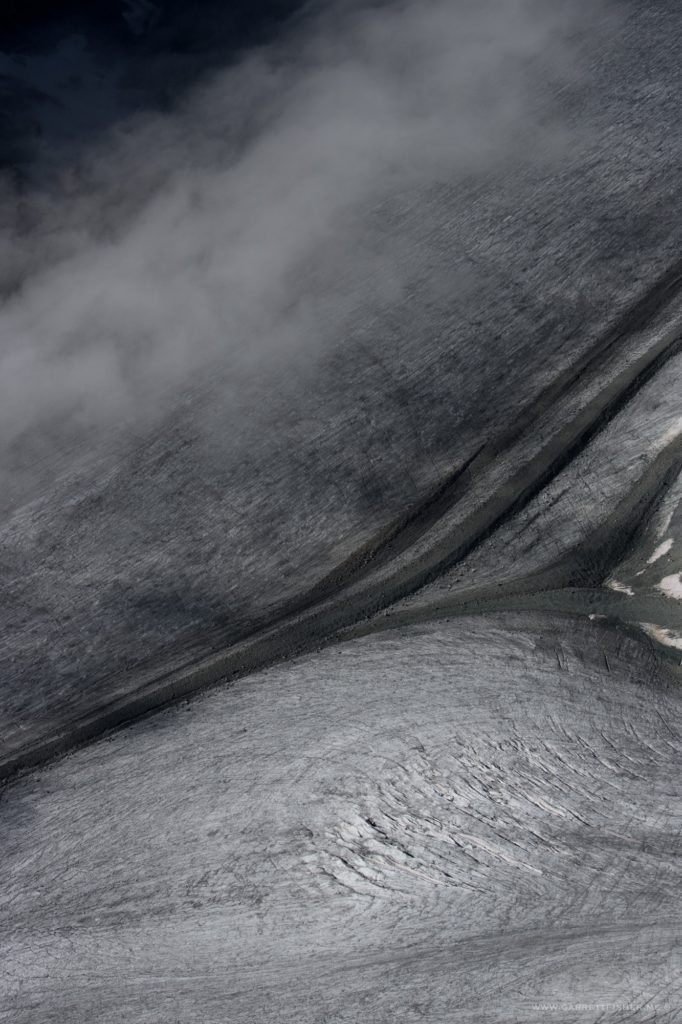 Glacier du Mont Miné. By this point, I realized that whatever mental track I had of what glaciers existed was completely wrong, and there were far more than I recalled. 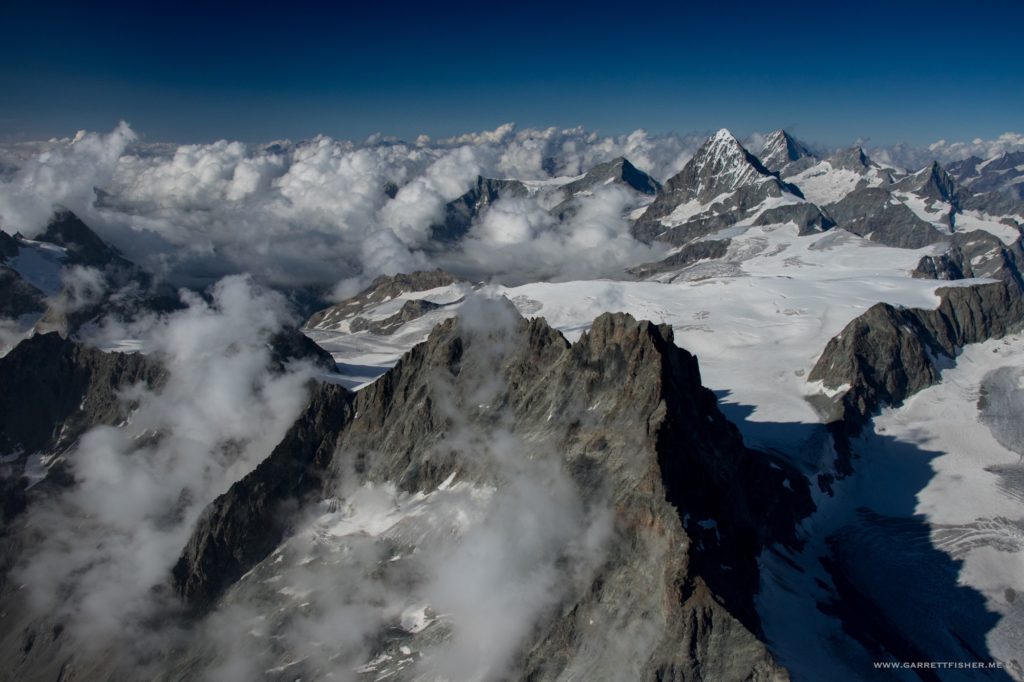 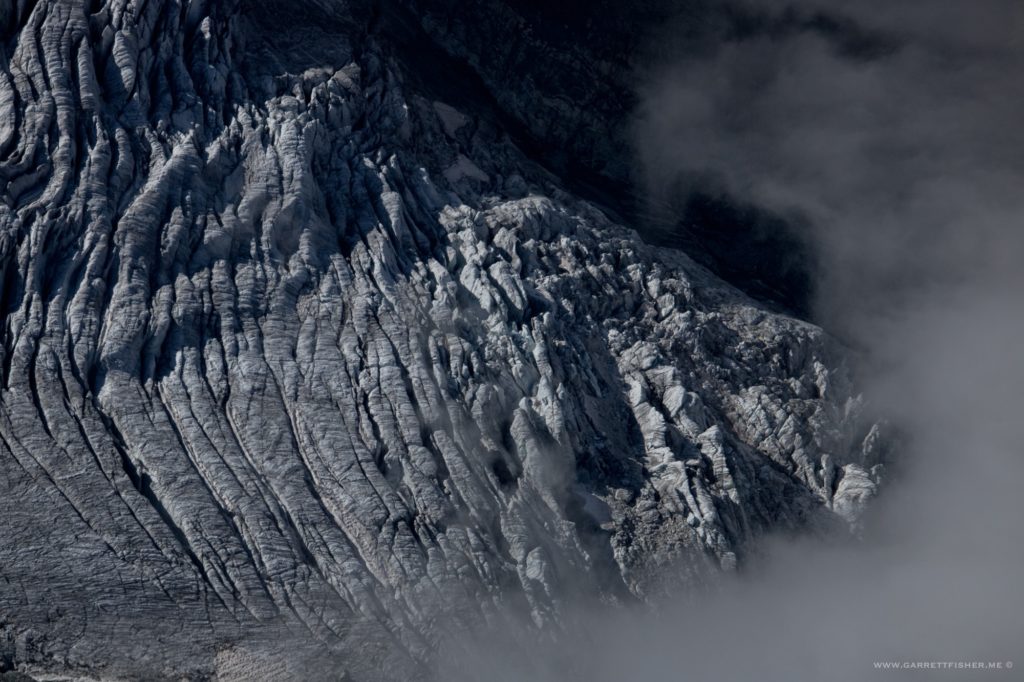 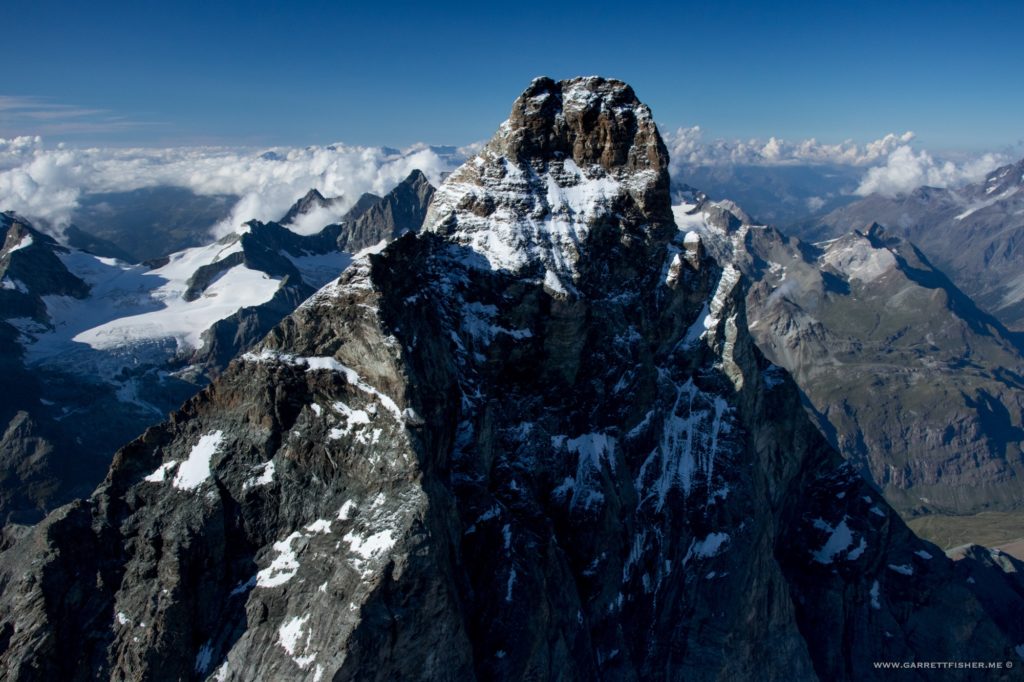 Why not get closer? 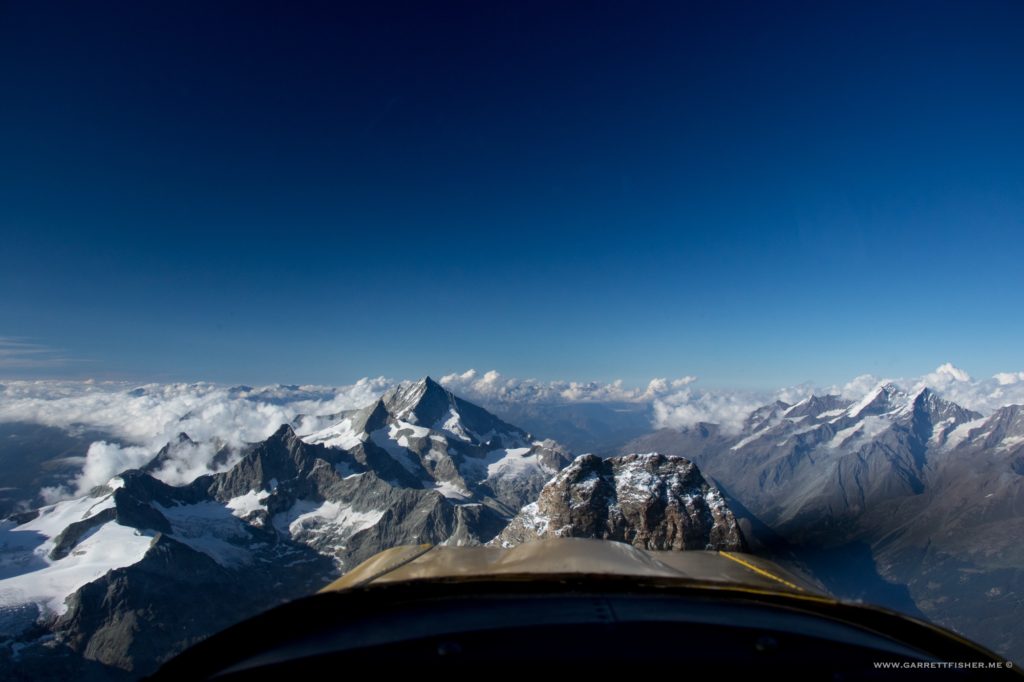 Ice cap on the Italian border. An ice cap differs from a glacier in that an ice cap is frozen to the bedrock, whereas a glacier moves as a river of ice. 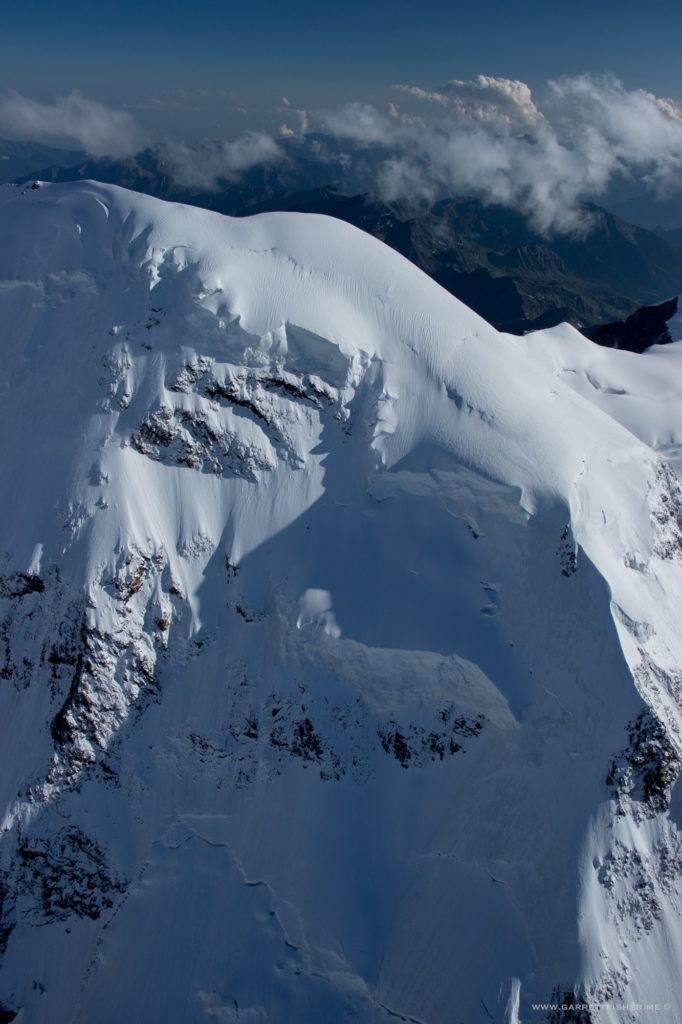 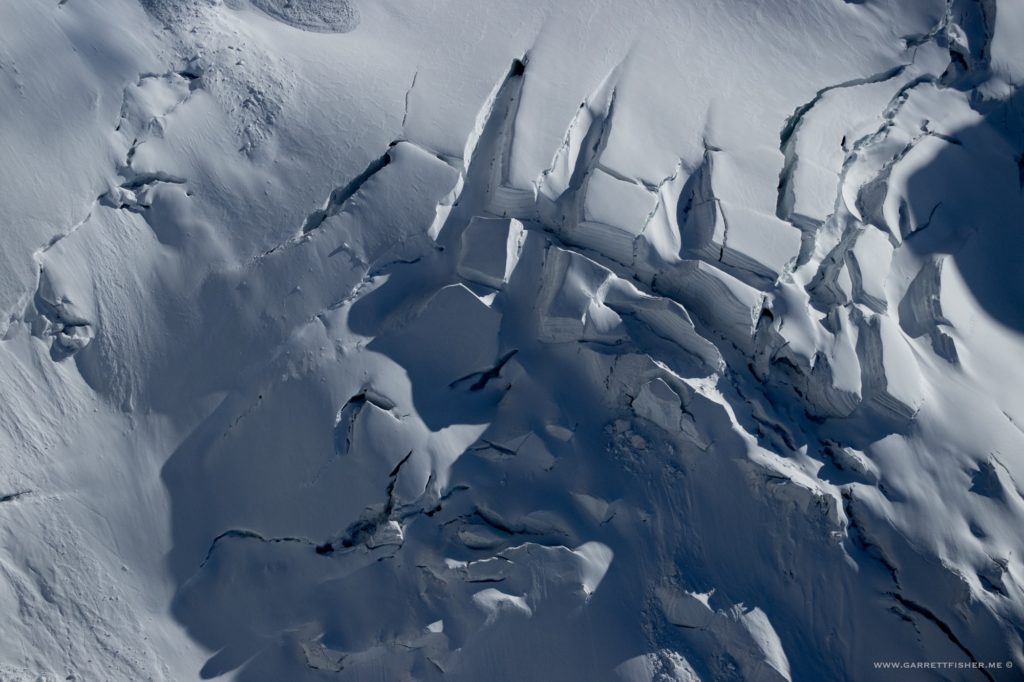 Matterhorn again, from the north. 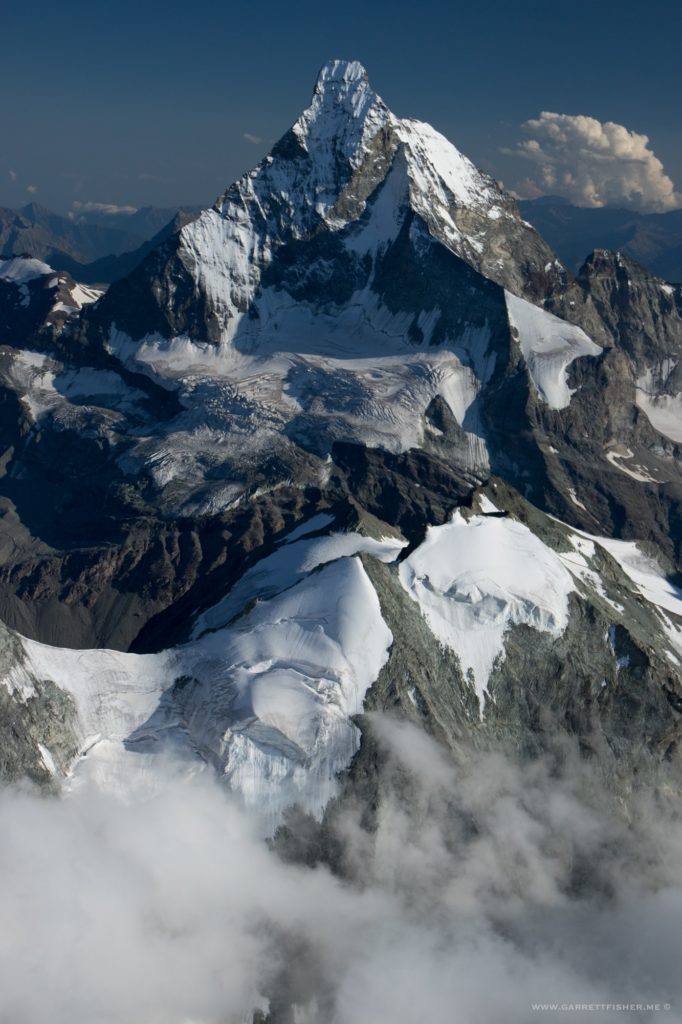 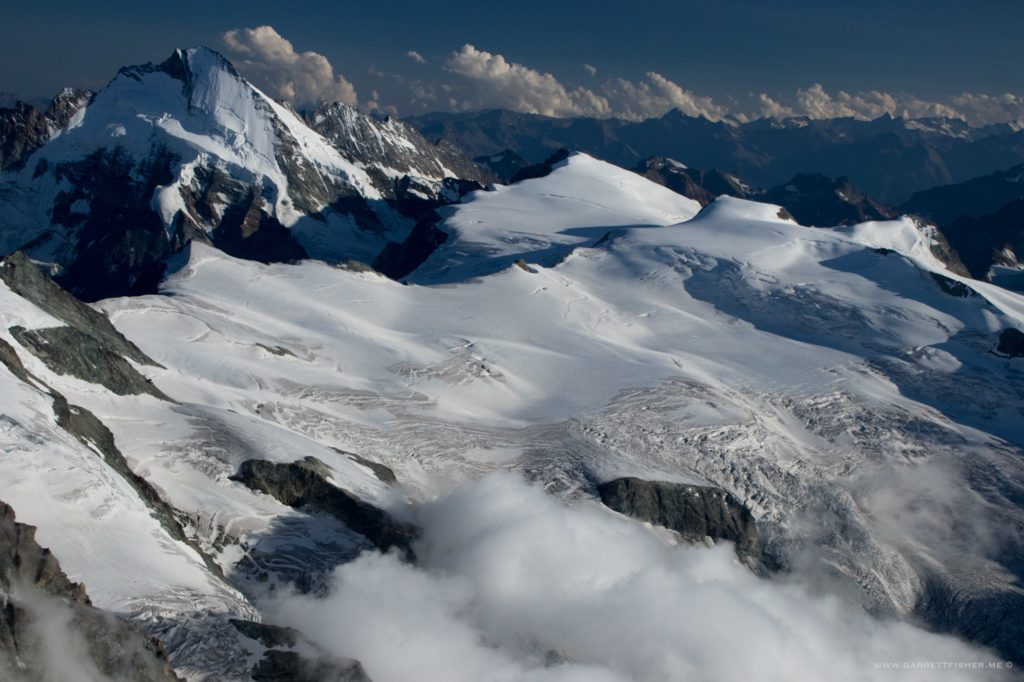 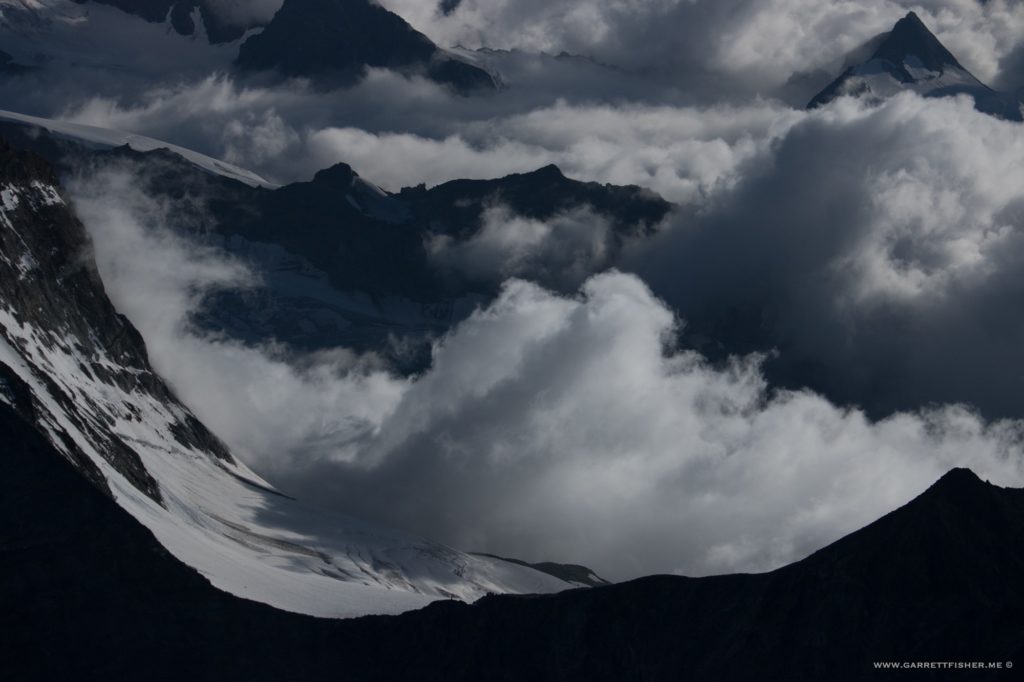 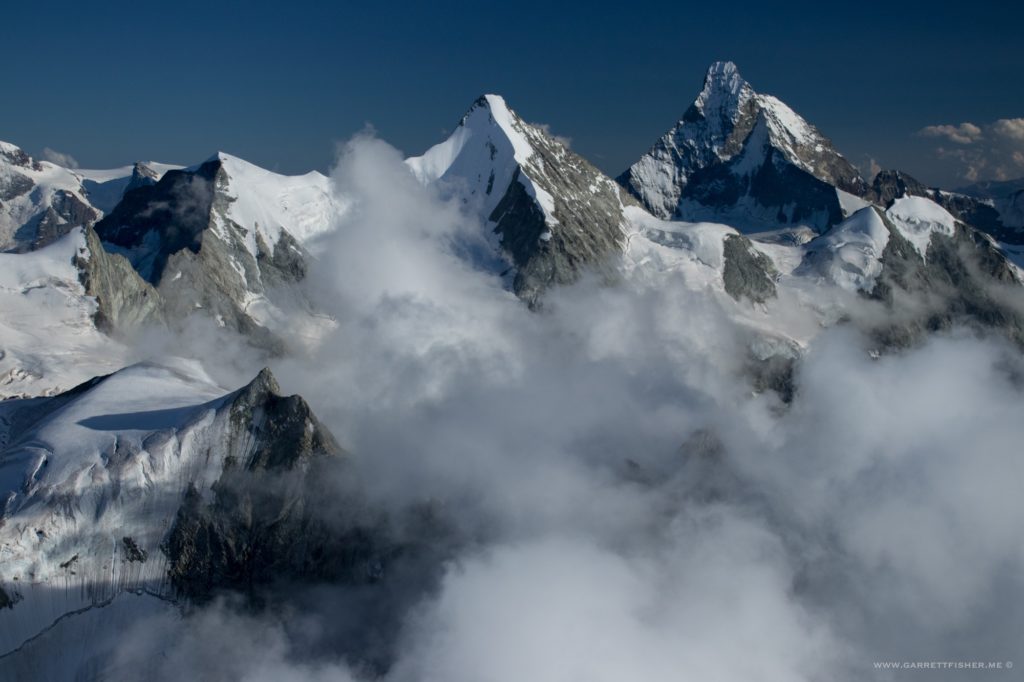 A mountain range lurks in those raised clouds. The path back to the airport is in the hole to the center left. 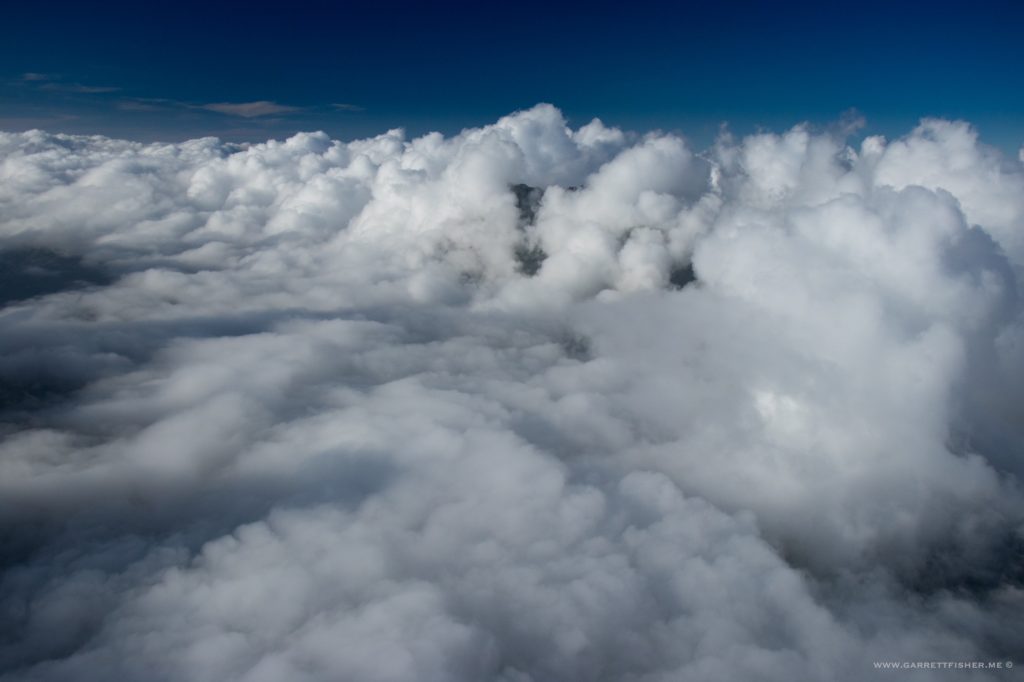 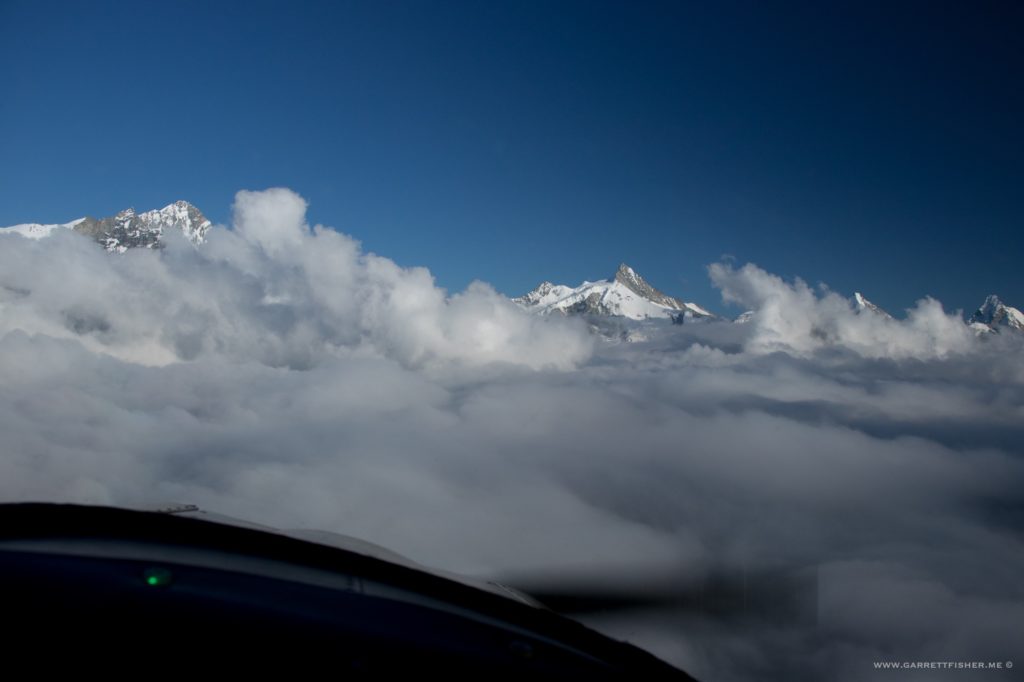 On final to Sion. Obviously all of that was senseless bluster and there is nothing complicated about it. 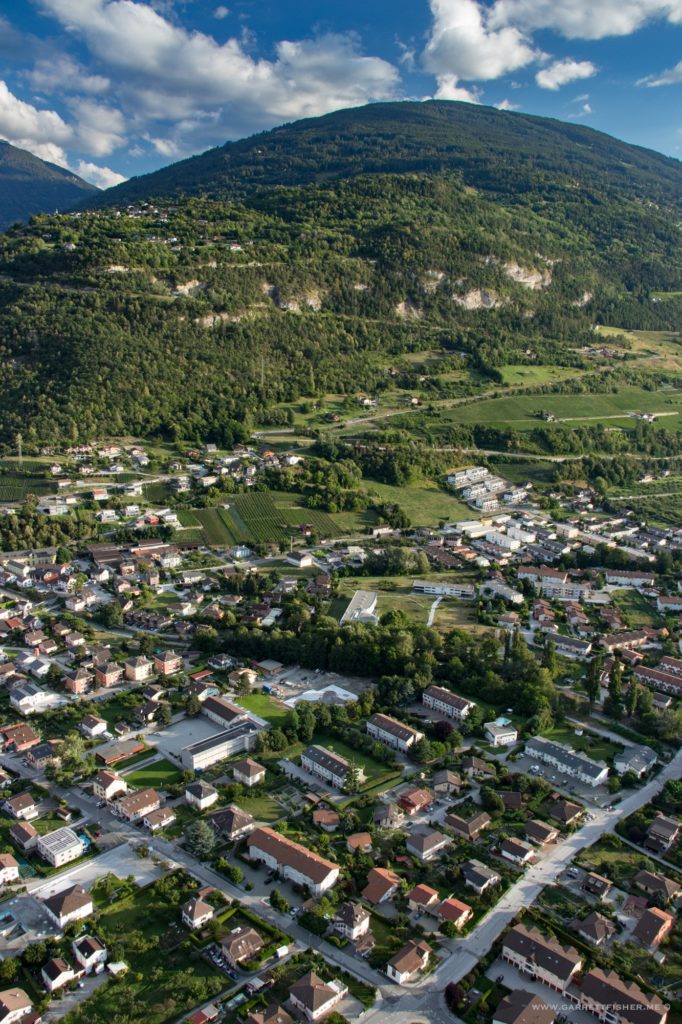