While much hay was made in the last few posts about a 16-hour monastic act of aeronautical deprivation, few reasoning pilots would fly to such a point in such a circuitous path only to turn around and head back. The plan was to spend some time in southern Spain, as a friend had extended an invitation and aided in making facilities available. Four years ago, I made a much shorter trip to the same area in the PA-11, flying down from the Portuguese coast north of Lisbon, where I had been staying for some months on end, so this wasn’t the first rodeo in the area. At the time, I only spent a long weekend, before returning to Portugal.

I could write a book on the differences between the PA-11 and PA-18 and what it means for flying. In summary, the Super Cub makes many things in Europe possible that the PA-11 cannot do, owing to sparsity of viable refueling points and time-consuming anachronisms involving each refueling. What usually takes 30 minutes in the US can consume up to 2 hours. Add poor placement, which means often stopping early (as continuing would mean fuel exhaustion), and what should take a few hours might take two days, which means it does not happen. Cartographus interruptus is a frustrating condition where one stares at interesting sites on Google Maps, desiring to fly there and ultimately unable to do so. A Super Cub is a cure for the condition.

I came to the conclusion, one that I already knew yet had not organized in my own thoughts, that I like mountains (in particular glaciers), coastline, desert and, if it is anything else not in the above that is flat, it had better be interesting. Otherwise, I am not keen on it. Therefore, it left some coastal exploration to be had, though I first had a point to visit not far away.

On a drive with a friend to Seville along the wide-open coastal farmlands, he pointed to a town on the map called “Palmar de Troya” and mentioned how “there is a sect there” to which I immediately remembered the name from a Dan Brown novel about a freakishly large cathedral in the middle of nowhere in Spain. It was confirmed that we were discussing the same thing, which I found surprising as I had mentally filed the location of this strange church as being somewhere in the deserts of Central Spain, but I digress. On the next flight, I needed to go see it.

The Palmarian Catholic Church is a breakaway group that has declared the pope of the Catholic Church an apostate. They anointed their own Pope, built a large cathedral with a giant razor-wire fence wall around it, and carried on living the life of cult-like seclusion. Browsing Wikipedia shows a fun list of “antipopes” all over the world; these people are not the first. Anyhow, the first Pope left, married a nun less than a decade ago, broke into the place trying to rob the basilica, got into an altercation with a bishop where neither of them turned the other cheek and ended up stabbed, arrested, and sentenced to prison. He has since said the church is a hoax but it carries on.

Flying over the place was indeed quite interesting. Cortina wire and a gated entrance clearly not keen on visitors reminded me of the searing enthusiasm for Christ and the need to spread the gospel…potentially in an act of reverse psychology, by making it harder to receive the blessings of the “real” Pope? Perhaps they took a page from the Jewish faith, where would be converts are viewed with suspicion and traditionally rejected when attempting to join? Anyhow, the “reverse psychology” guard installations plus suspicious glares coupled with my repeated circling of the place made me wonder if the Holy Spirit would send a hypersonic piece of lead into my aircraft (if a bishop can stab, he can probably shoot), so like the good devil that I am, I made haste in my Satanic chariot of the skies and got out of there.

After that sinfully devilish escapade was completed, I tried to overfly Seville to get some photos of the city, but the knife-wielding bishop must have phoned ATC, as they rudely refused to let me get within 10 miles of the city. I frolicked in the open agrarian plains and called it a night.

The next flight was a coastal run all the way to a refueling point at La Axarquia east of Málaga. I crossed the mountains in Andalucía where the Atlantic gives way to the Mediterranean and enjoyed a few hours of beautiful coastal flying eventually getting to a point where the Sierra Nevada was visible at a distance. I had to cross Málaga’s airspace, which involved lots of holding, given that it is the fourth busiest airport in Spain. The city itself is the 5th or 6th largest in Spain, yet I hadn’t ever heard of it. It is funny how it was hiding the entire time. 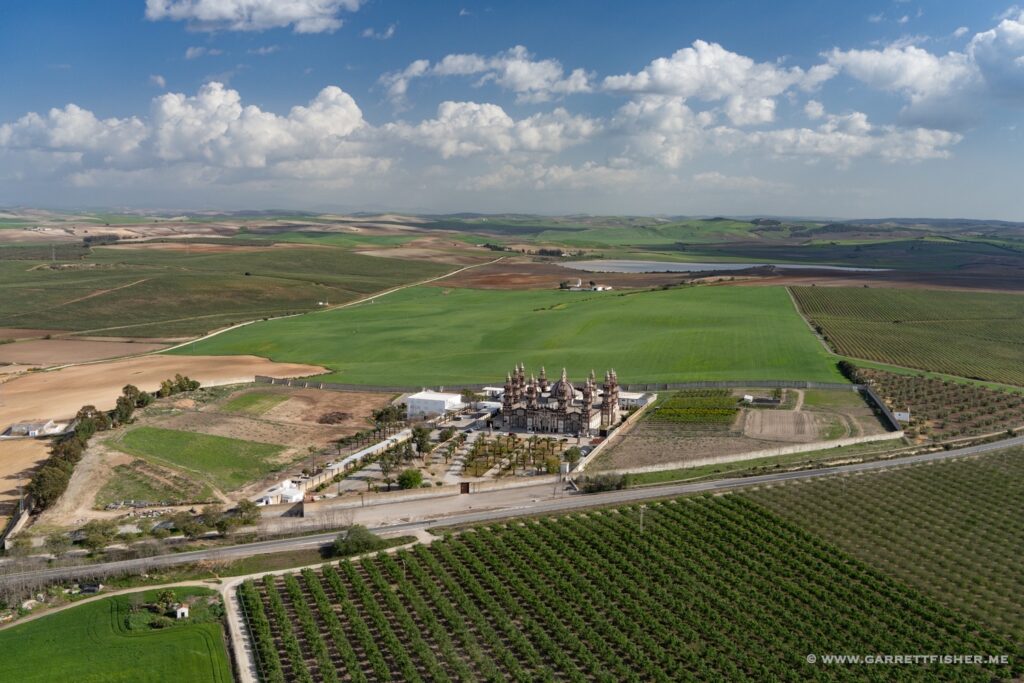 The True Christian faith….visitors not welcome. Maybe it boils down to this: if a man can cough up the cash to build something like this and convince people to follow him, perhaps he deserves to be the Pope? 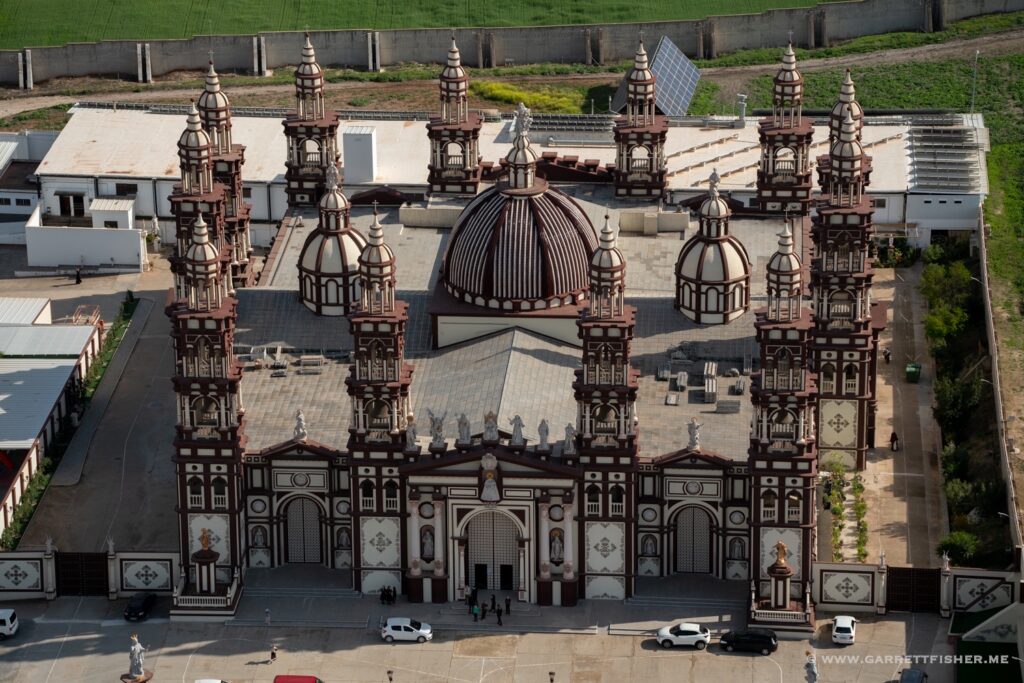 Coastal plains of Andalucía. It is a dreamy landscape that I do not tire of. 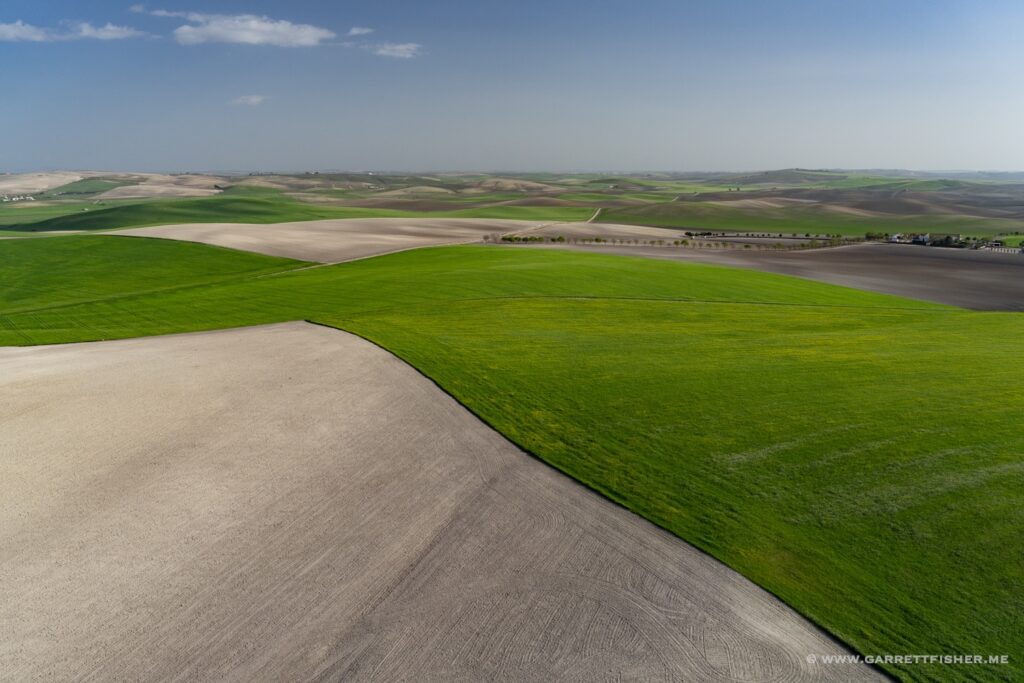 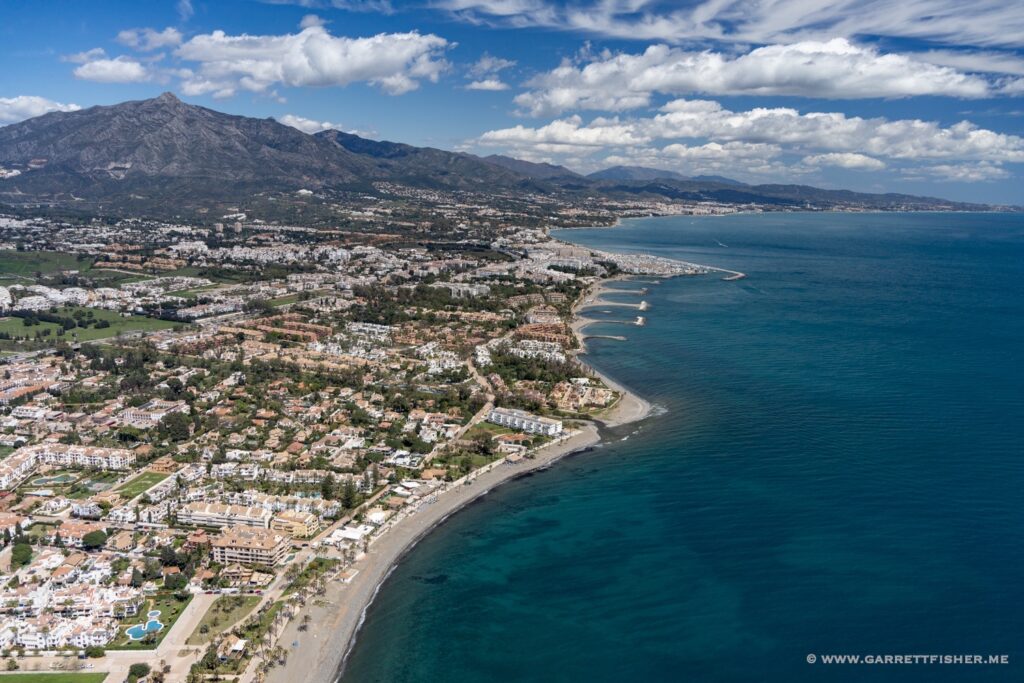 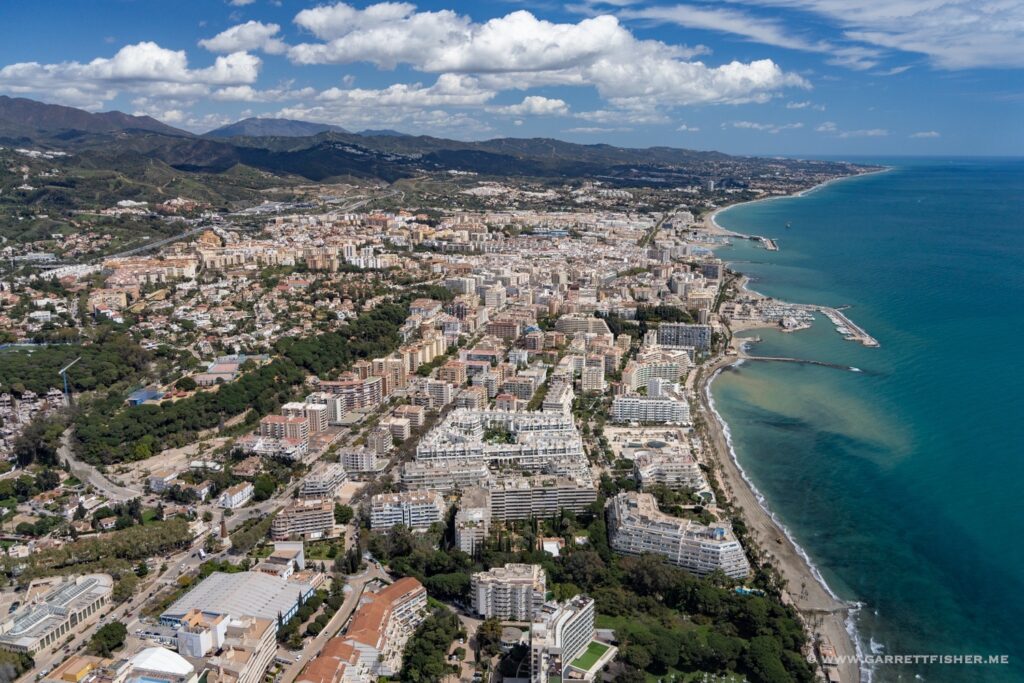 Holding point Papa Whiskey One for Málaga. Thanks to the “package holiday,” the Spanish coast is astonishingly and horrifyingly overbuilt. Natural coastline is hard to come by. 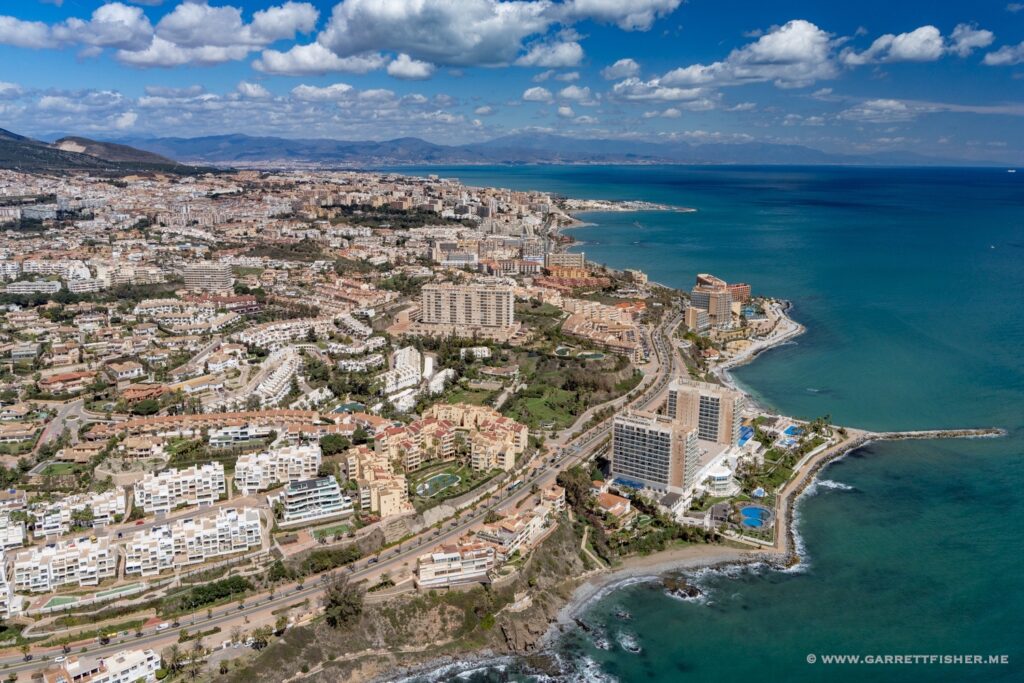 The port of Málaga. Part of the city itself is in the background. I am surprised I did not know about the place before. Airline traffic was virtually nonstop arriving and departing on two runways.

A breath of relief…natural coastline. It turns out it is more “natural” than I thought! The small cove in the center right is Cantarriján nudist beach according to Google! Too bad I wasn’t paying better attention with the zoom lens. 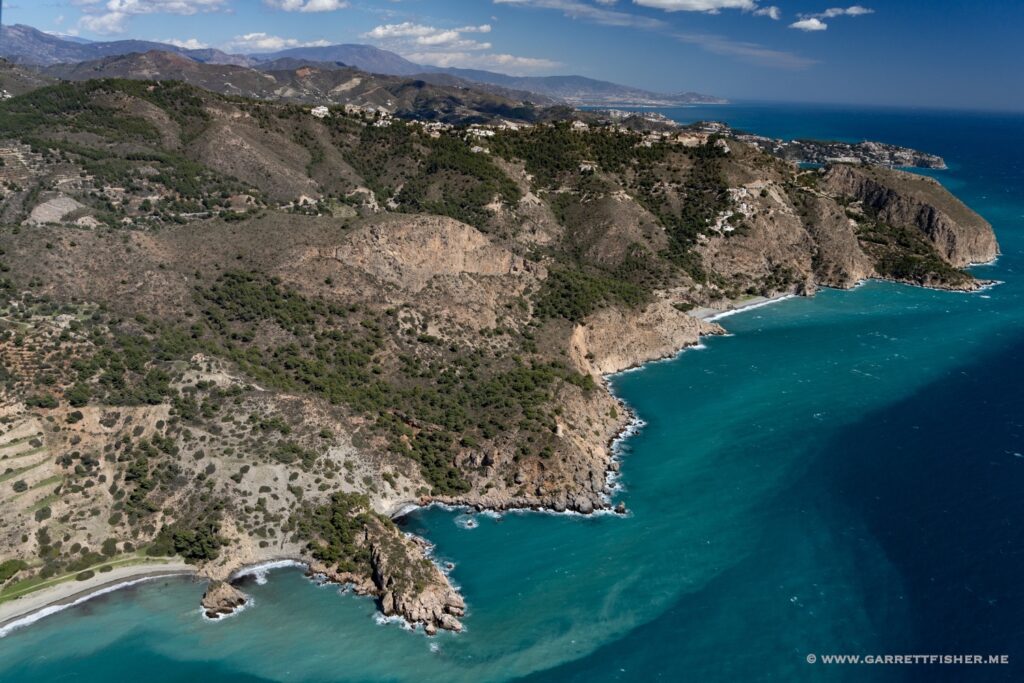 After fueling in La Axarquia, I intended to go into the Andalucían hills, except I was only allowed to cross Málaga at the VFR points, so I continued along the coast instead. 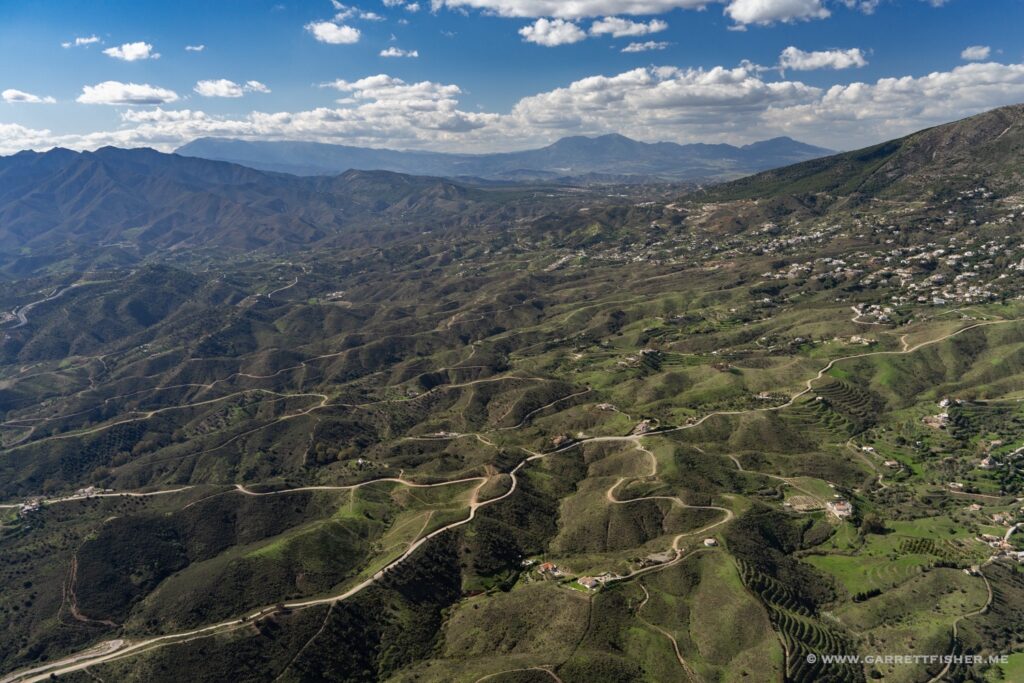 Ojén. There are many of these “pueblos blancos” (white towns) in Andalucía. It would be sensible to identify that the nomenclature derives of the colors of the buildings, presumably intended to reflect flaming summer heat. 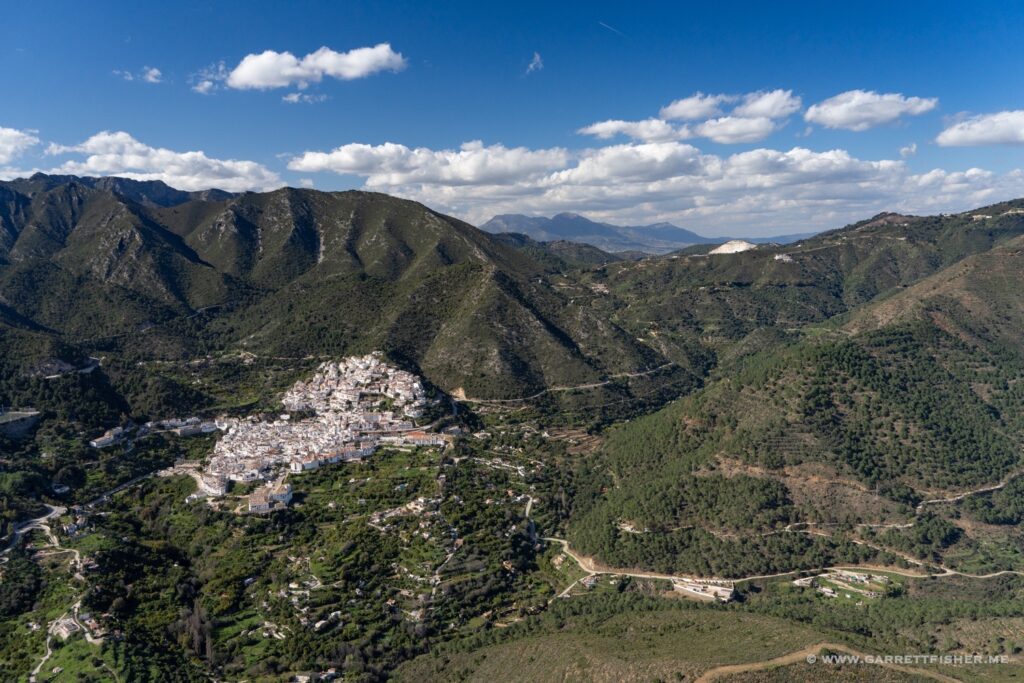 Estrepona, with the Rock of Gibraltar on the horizon. More on that in a future post. 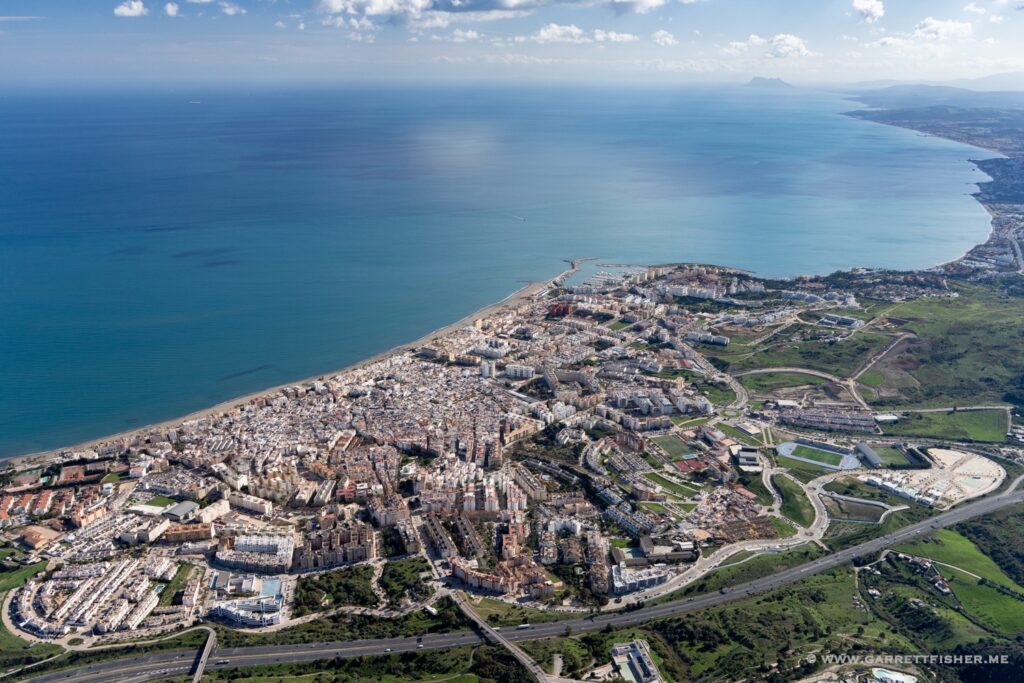 Embalse de Guadalcacín. To the right is one of the wettest areas of Spain, owing to terrain and incoming winter storms. 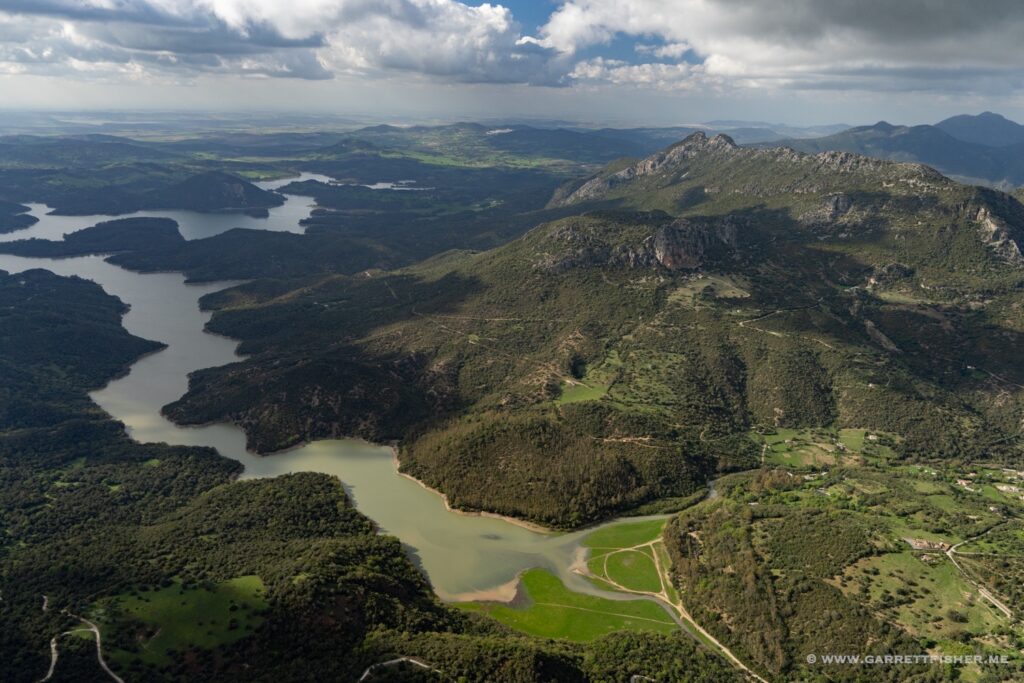 Approaching the temporary base of Trebujena, the coastal plains appear again. 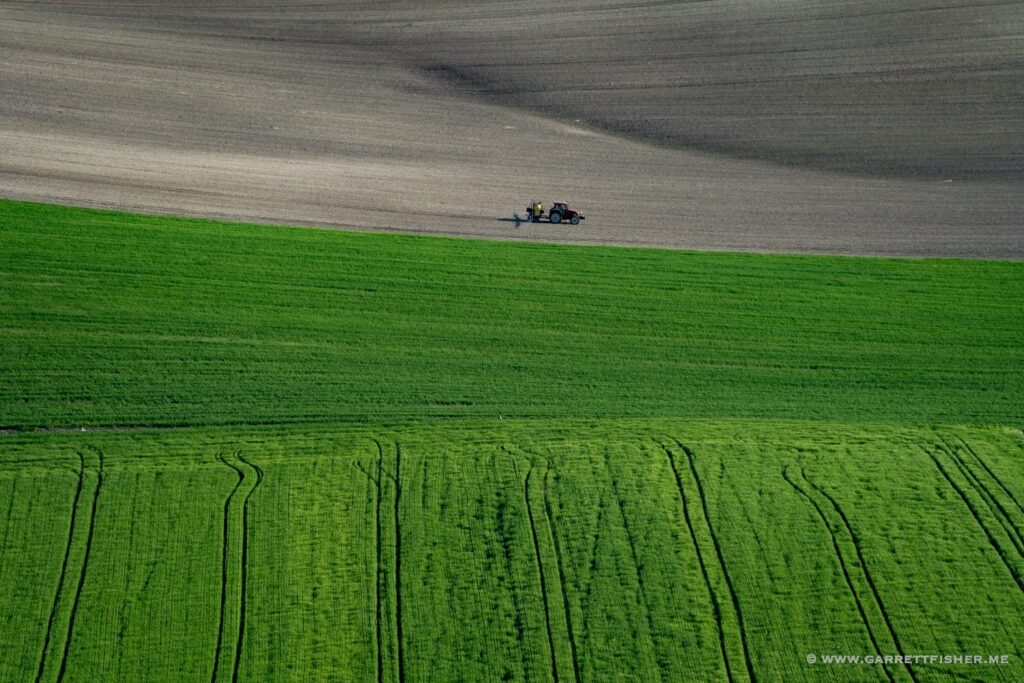 I can best describe the farmland as “dreamy.” It is an intoxicating explosion of texture. 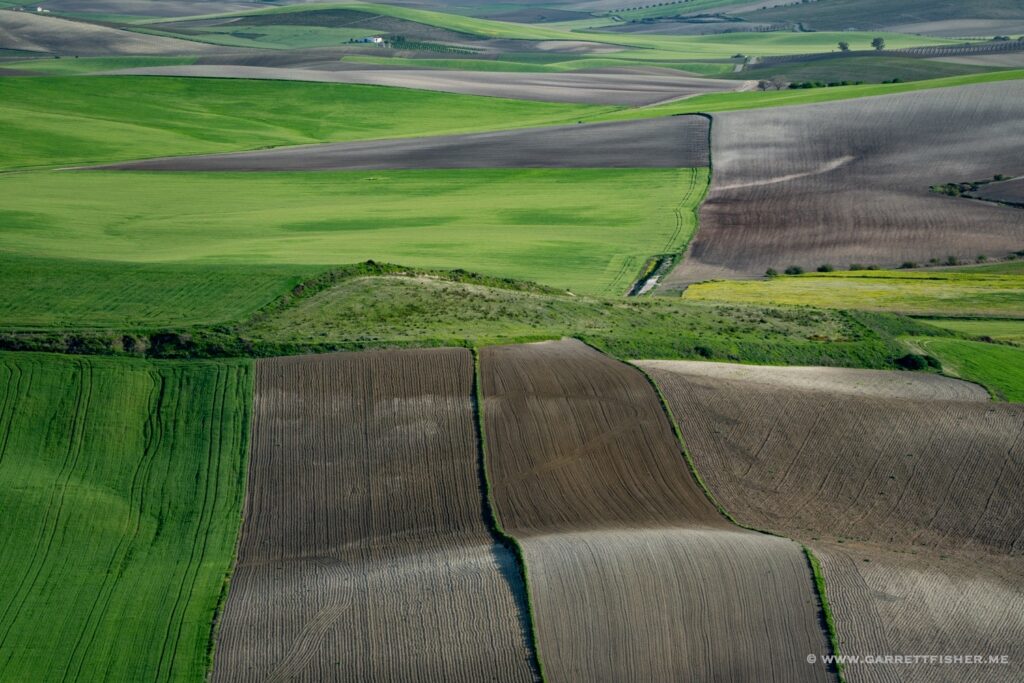 Velvet. Not far from the airport. Scenery like this extends in all directions. 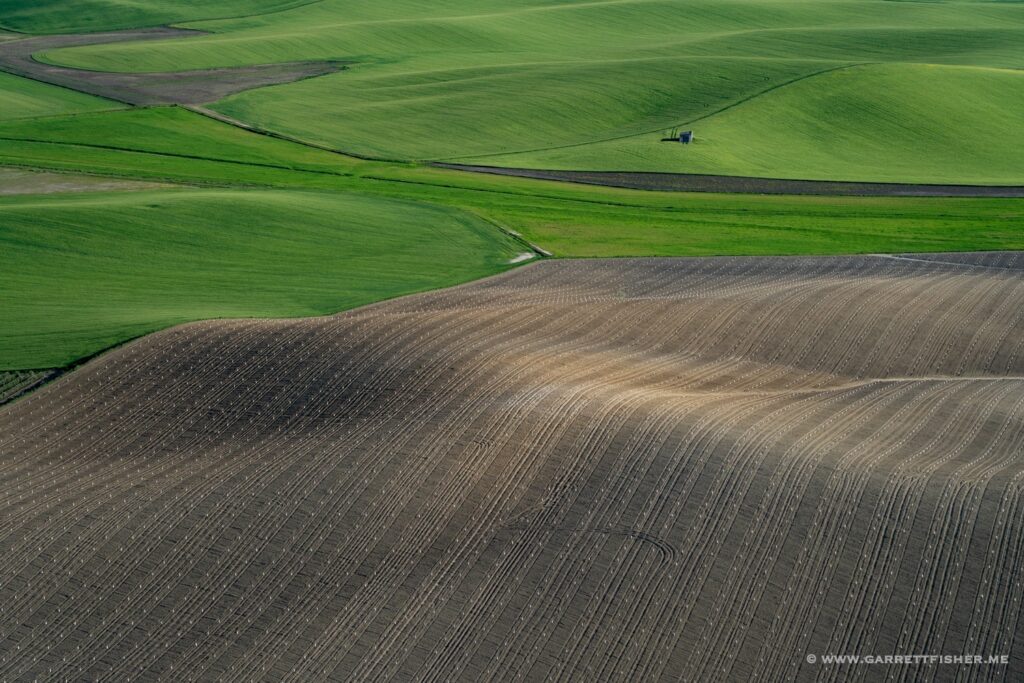