For this post to make sense, it would be helpful to tie in where the title for this “blog within a blog” came from, the philosophy of “existential dread.” I quote, in part, Wikipedia: “”Existential angst”, sometimes called existential dread, anxiety, or anguish, is a term that is common to many existentialist thinkers. It is generally held to be a negative feeling arising from the experience of human freedom and responsibility…Angst, according to the modern existentialist, Adam Fong, is the sudden realization of a lack of meaning, often while one completes a task that initially seems to have intrinsic meaning.”

So there you have it, my experience in a nutshell. Soaring the grandness of the heavens, above some of the most majestic mountains on earth, laden with a realization of a complete lack of meaning…resulting in dread. Think about it: the prospect of cratering into the side of a mountain looms large, creating its own dread, while also contemplating the existential pointlessness of one perspective over another. In the quantum space-time continuum, the conversion of my biological mass and my aircraft into a pile of charred wreckage via a sudden smack and incineration really wouldn’t matter.

Anyhow, it is these optimistic circumstances that allows one to muse about philosophies while in the air, and if one has read anything I have written while savoring some of these orgasmic aerial perspectives, it is a fight with social crosscurrents that define our perspective of travel and the illusion of depth that comes from it. I am often, while covering some ground, railing against the superficial race to the bottom that has become modern travel, ticking off a list of popular places, posting it on social media, and acting as though the whole exercise means something.

It is strange, as when I started such adventuring with the Cub in 2013, it was downright spiritual to cross most of the country to Colorado and see mountain ranges for the first time. Each new bit of scenery, from 2013 to 2015, from the Atlantic Ocean, Mississippi River, hazy Appalachian summits, every glacier of the Rockies, the convergence of Alberta, British Columbia, and Montana, multitudes of national parks, river systems, open range, galloping herds of wild mustangs….the list goes on…and in each case it was a spiritual baptism in Americana. The newness of it all was so astounding, enriching, and full of depth that I couldn’t seem to get enough.

Then, around the turn of 2016, I came to Europe. Apparently, that ruined everything, at least when it came to losing my travel virginity each time I found a new mountain range.

It is exceptionally ironic, as the dimension of newness increased significantly. Instead of a mountain range and another wide-open western state, it was a new country, a new language, incredible human and non-human scenery, different plant life, different topography, and a level of unknown that blows away seeing Colorado for the first time. In fact, by some measures, certain natural features exceed what existed in the US West (save for space and expanse). In a sudden turn of affairs, chasing the “new” got quite old, and I began to look for a level of depth in what I was seeking. Things got so bad that anytime I saw yet another crowd of bumbling tourists Instagramming yet another ho hum medieval castle, it would churn my stomach. Such intellectual nausea caused meditative periods of flying in silly weather or hiding in the woods. I to this day have proudly never gone to La Sagrada Familia in Barcelona, despite not being far from it.

It is my recent flights in America that brought this all clashing together, which is the subject of the photos below. One could note my love affair with wide open Americana having terminated arriving in a brand-new land of expanse, instead chasing a different paradigm of philosophy. Now a return to cross half of the United States in an old aircraft forced the two to sort themselves out.

It is true that someone traveling to Venice and posting it on social media has discovered precisely nothing new in the physical location. Perhaps the individual found something inside him or herself upon visiting, which I applaud, though I confess I cannot see such a depth of thought in a social media feed. At any rate, in 2013, I was flying 100 feet above the ground, camera in hand, in the western American Prairie, feeling like I had found something distinctly new.

But how could this be? My airplane was manufactured in 1949 and many of them have made it to Alaska and the West Coast. I am not the first to take a picture while flying, nor in that location. Could it be that I am mixing a modern lifestyle with aviation and the West? Partially, though I note living on an airpark in Wyoming, while other pilots flew leatherclad rocket ships from the East and West Coasts for their summer getaway, and I can assure you they were doing it well before my first jaunt West. Was I the first to visit Colorado from where I was born? Hardly. Some families took regular commercial flights dating to the 1980s, landing in Denver, driving to Vail, and returning to brag about it (I admit jealousy at the time though they were pompous assholes about it).

So, what is so utterly spiritual here? I thought about the many airline flights I took to Colorado before my move there. None of them felt spiritual. Sure, Colorado was scenic, though I can attest to a distinct superficialness spending a long weekend in the Rockies. While my senses were titillated, they were in a way overloaded. There was also the conflicting incentive to cover as much ground as possible, replacing depth of appreciation with a thinner consumption of a larger area. It is impossible to get much of a real feel for the place doing it that way, and my memory correctly serves to note the difference even today.

I used to like commercial airline travel. It was a magical portal to drive to the airport, board a plane, sit by the window, ignore the discomforts, and be whisked within hours to a different time zone. Roughly when I moved to Colorado, I grew to dislike it, to the point that I now, as a pilot, sit by the aisle, put earplugs in, and do what I can to pass the time like it didn’t happen. When I arrive wherever I am going, I find the experience overwhelming, annoying, and lacking any of the luster it used to have. Looking at the postings of others, capturing what I scornfully declare to be a superficial skimming of a new area, pisses me off even more. Others see the magic of Lisbon. I see that god damn six lane traffic circle outside of the airport that nearly results in a car wreck driving in it, and I drive down the wrong highway exit, every single time, cursing at Google Maps, then ranting about everything, including the caramel macchiato that I bought at Starbucks in the Lisbon departure area inevitably having spilled while squealing tires in that cockamamie roundabout.

I recently read a travel writer refer to the “portative experience” of airline travel, and that our brains are meant to savor a change in surroundings at a pace closer to our physical ability to move ourselves (i.e., walk). To board a plane and 8 hours later have crossed an ocean is not something we are well suited to fully understand. I could not agree more.

In fact, I think that is how I had the key to finding depth while covering distance. It took 27 hours to fly from North Carolina to the Idaho border in 2015. I spent three days and two nights getting from North Carolina to Colorado in 2013, flying from 50 feet to 800 feet above the ground, at speeds ranging from 45mph to 90mph groundspeed. Unabated by trees and other things that block one’s view in a car, I was able to traverse nearly a whole continent at a speed and height where one could literally take in the temperatures and smells, while visually absorbing the changes and intimacies of the lifestyles below. While I was operating old technology, I had, indeed, found something new.

Here in Europe, I fantasized about covering distance like I did in America. Sure, I had no clue what kind of crap intelligent minds on this side of the pond could conjure to make aviation a complete pain in the ass, and cost amounts comparable to mortgage payments. Nonetheless, one would note my national crossings are much less than flights of similar fancy in America. In the beginning, I was pissy about it. Now I have come to love staying within 100 miles, as long as I put myself in a stunning gorgeous area.

What is happening here? Europe is so textured, has so many microclimates, has so much history, and has so much to see that depth can easily be found in a shorter distance. Flying far away has become something of the long weekend by airliner to Colorado…it’s so superficial I can’t see the point in spending the time and money to ultimately see very little as I am either overwhelmed or forced to ignore the depth below. I offer similar advice to Americans that want to come visit…furnishing recommendations of out of the way places to see and enjoy, and every single one of them comes here and hits the high points, fluttering around like a lunatic with tens of thousands of other tourists. I don’t understand it, though it has taken years to get over my crankiness about existential dread and travel philosophies. Besides, do I want people to invade my private wanderings?

The story behind these flights is well laid out in an AOPA post. I offer photos here that I didn’t offer there. 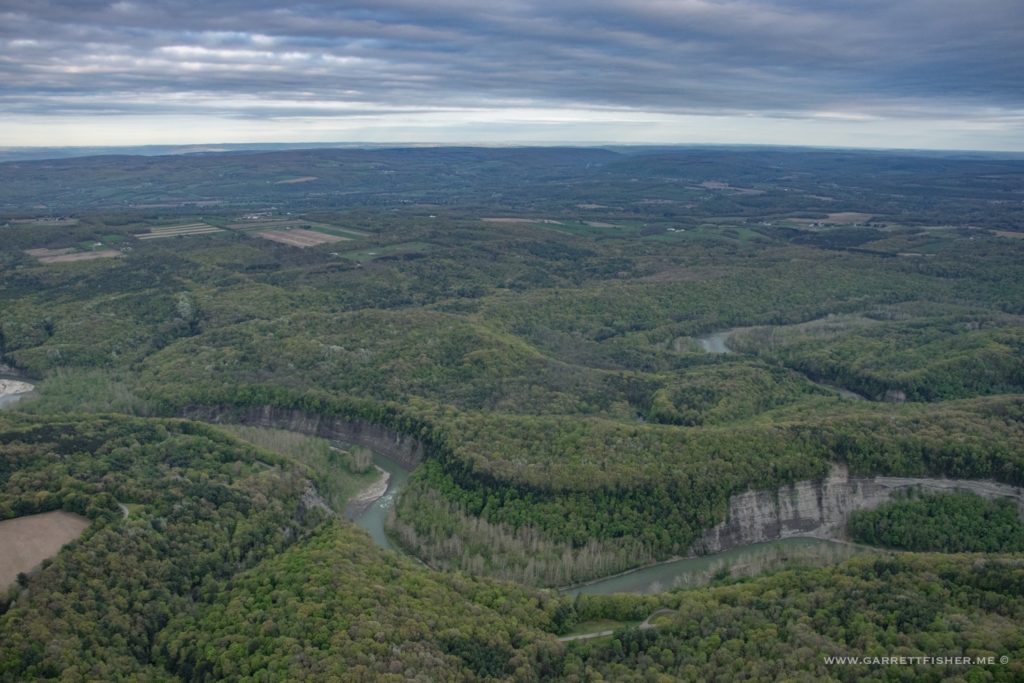 Agricultural textures – things I didn’t notice in my youth. 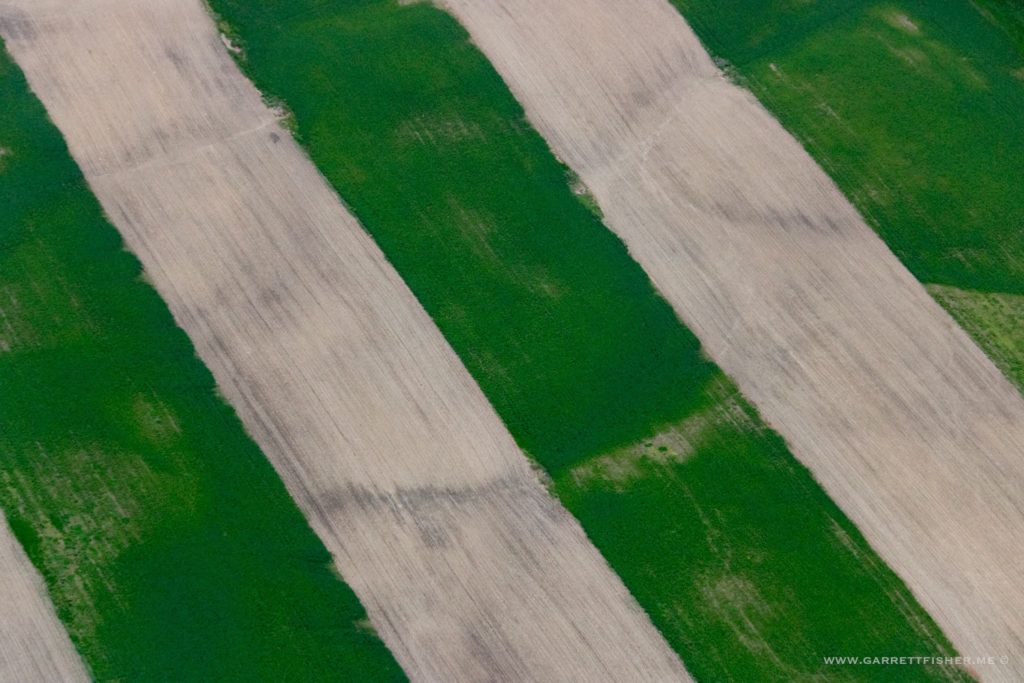 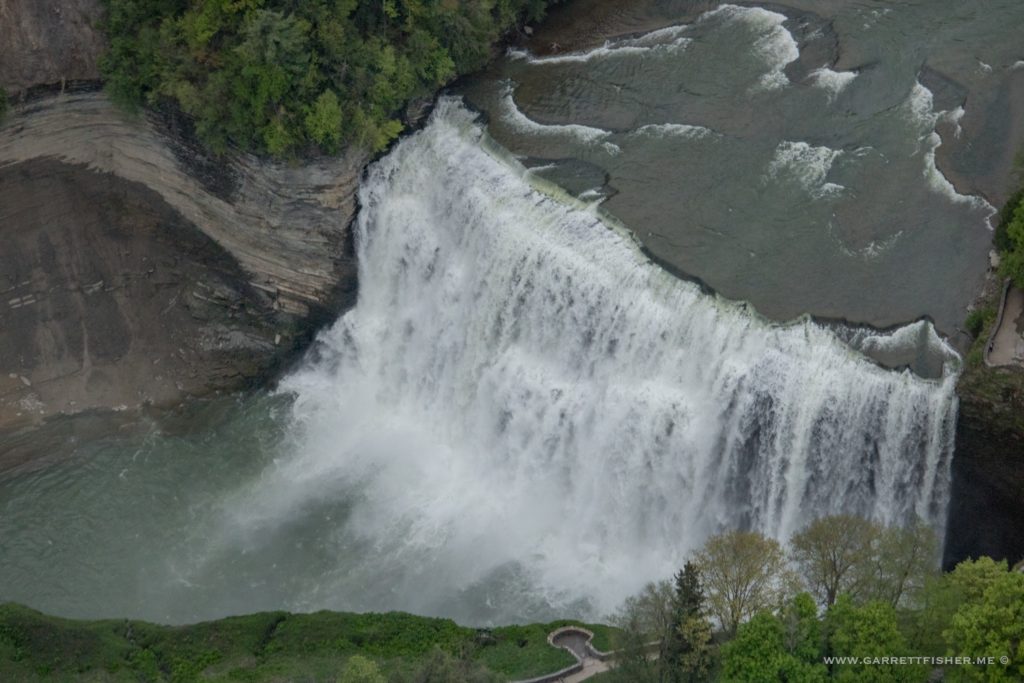 Larch trees, northern Pennsylvania. I can confirm that most of these are larches as I investigated some groves in early May in the French Pyrenees, that had just sprouted new needles. The branch structure next to the road gives them away. That, and they were there in fall color when I flew over in November. 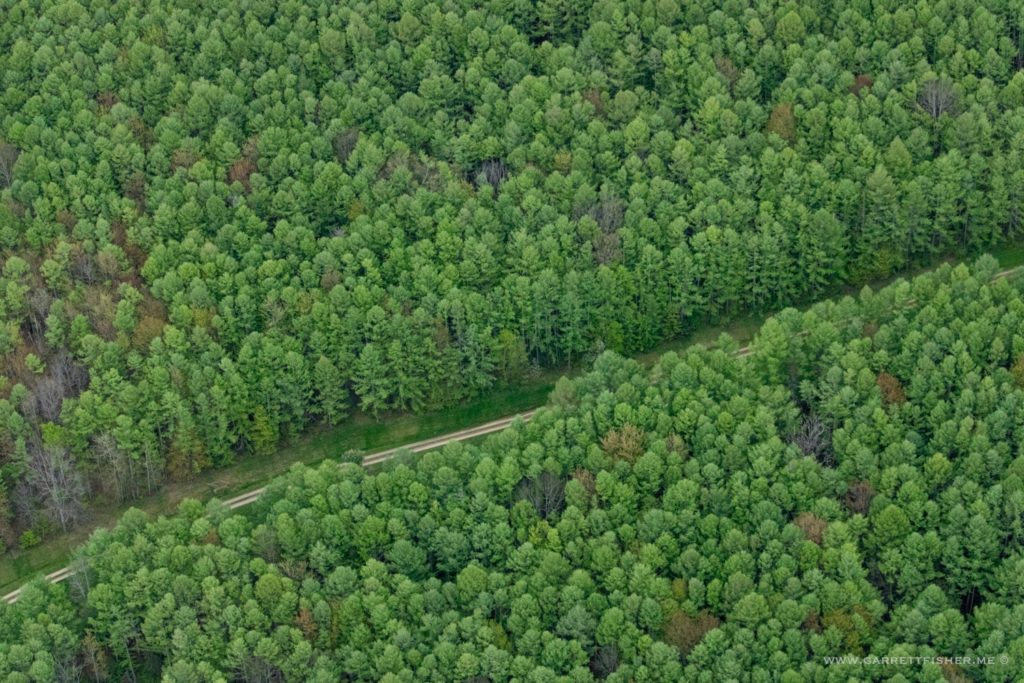 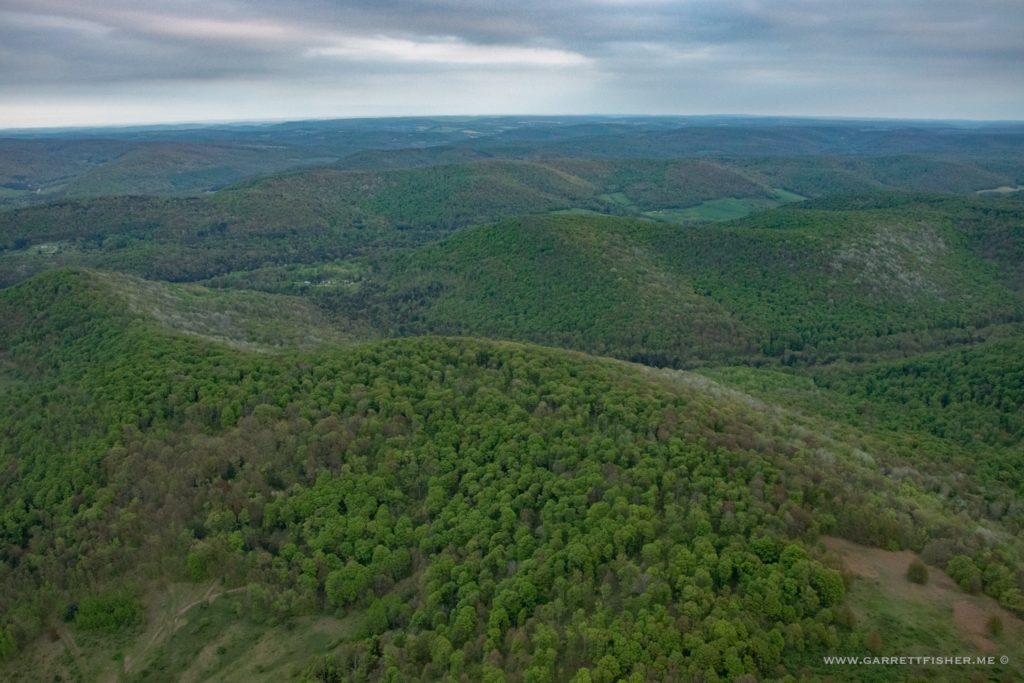 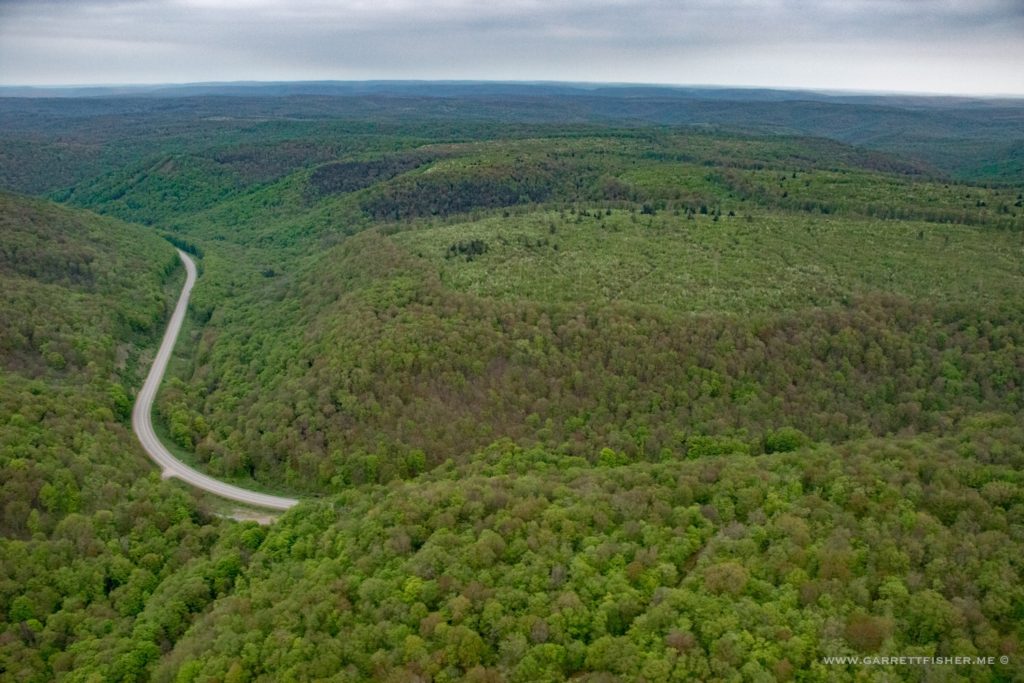 In other words, middle of nowhere! 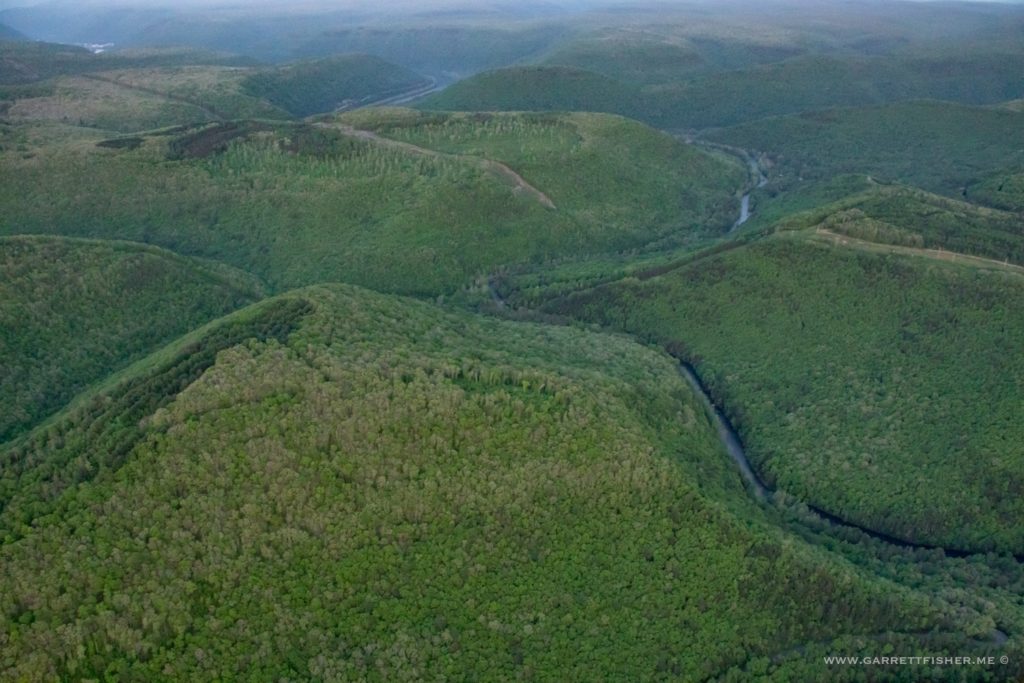 After overnighting in State College, PA, took off on a hazy morning heading south. 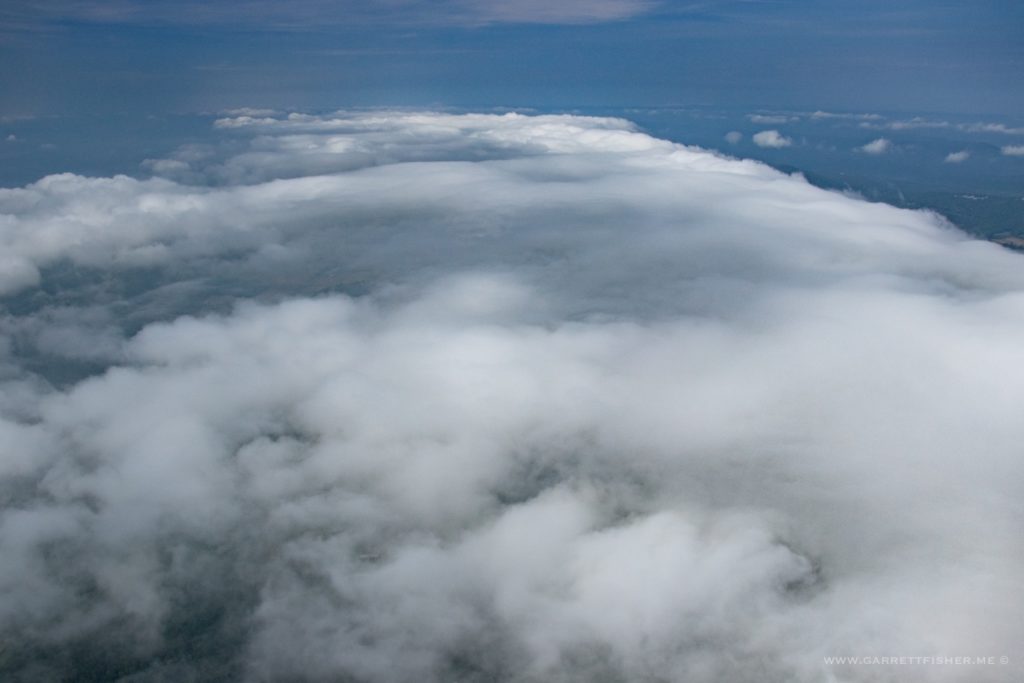 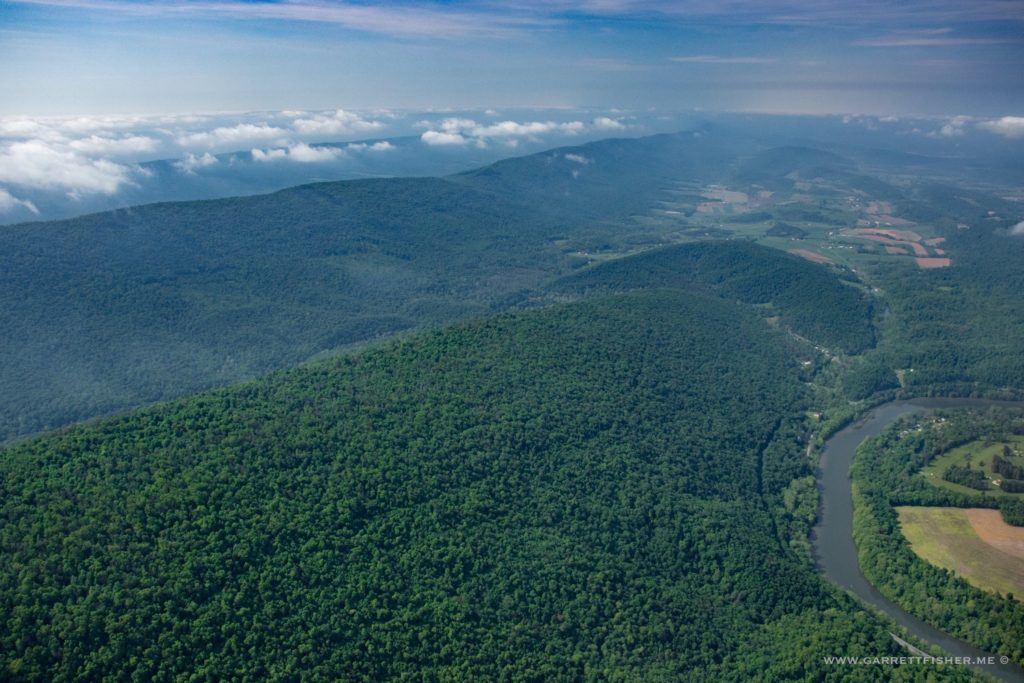 Brought the infrared camera, so I can see through some of the thick haze. 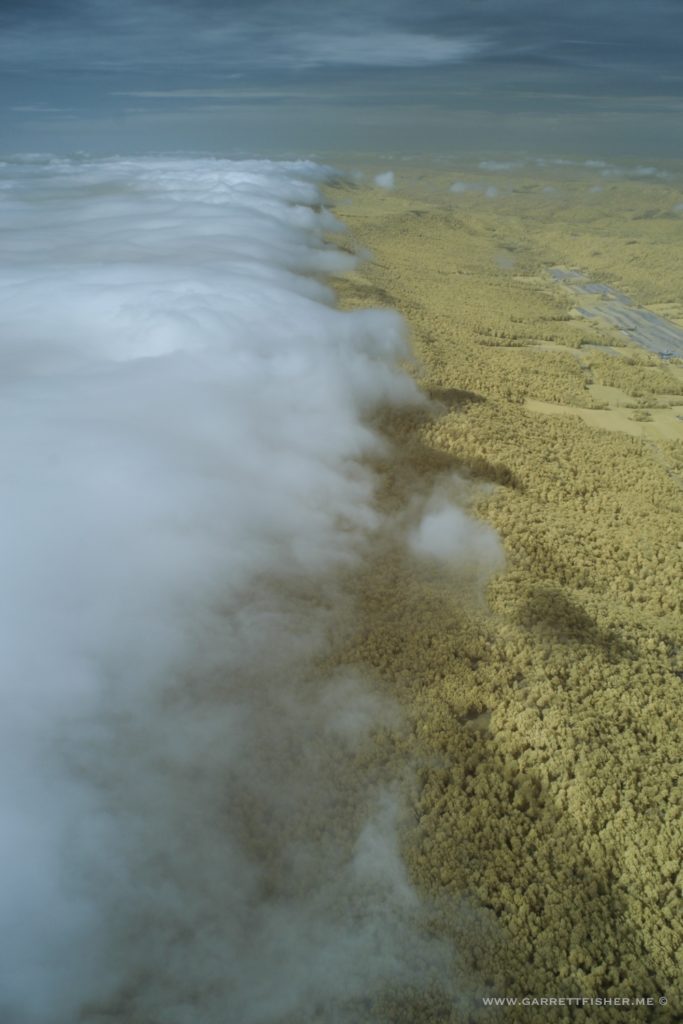 Who needs oil anyway? Landed at Hagerstown, MD as a precaution, noting that 4 of 7 quarts leaked out in flight. Note the Allegiant Air flight landing in the background. I can only think what passengers might be thinking when they hear “We have begun our initial descent into the Hagerstown area.” Everything about a jet of that size in a town this small seems odd. Anyhow, not making it to North Carolina…. 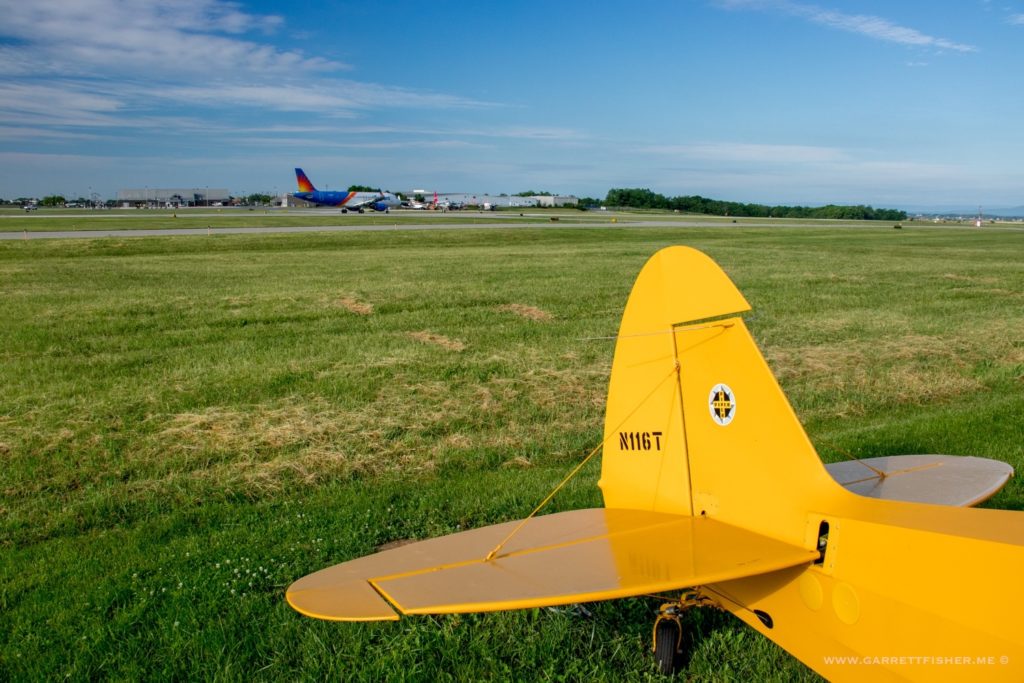