The forecast for the morning, as of the night before, indicated morning fog that would burn off at worst before noon. It did not help that I was up at 5:30AM, which is a peculiar scorn when I go on long flying binges. My normal schedule, aligned somewhat with California time, becomes more appropriate for the Moscow time zone, owing to something close to clear exhaustion at the end of each long day of flying.

Hour after hour ticked by, where the view of Mannheim’s industrial skyline was obscured from my 6th floor hotel window by pea soup fog. It lifted 100 feet by 10AM, then 200 feet by 11:30AM then…back down to 100 feet. Meanwhile forecasts continued to indicate clear skies by this point.

Finally, by 1PM, there was a hint that the fog was shrinking around the edges, according to the satellite animation. It was solid up the entire Rhine valley from Switzerland to Frankfurt, though rather low level. The Black Forest in Germany and Vosges in France both basked in sunshine, whereas the valley might as well have been Seattle.

I checked out, rode the tram to the airport, and sat with a thimble of coffee while working on my flight plan. There would be a two-stop arrangement: one to clear customs in Switzerland, and another to arrive in Saanen.

As 2PM rolled around, the fog was not gone. That is where my emotional composition unraveled. There was a 2.5-hour flight preventing me from finishing an odyssey from south of the Arctic Circle to the Alps, and some ridiculous fog on an otherwise beautiful day was causing a problem! If the fog did not lift, there was no certainty that it would the next morning, which stoked concerns of my Norway flame out on the first day.

What is interesting is that I shall point what I said to my wife, before I got on a commercial flight to Norway to view the airplane two weeks before. I mentioned that “the problem will be terrible weather in Norway, foggy coastal weather through Sweden and Denmark, and IFR over the hills north of Frankfurt. I suspect I will have to come up the Rhine from Cologne, where fog will be a concern getting down to Switzerland.” That is exactly what happened!

I was aware of the fog based on advice given to me 6 years ago by a German pilot. He pointed out that the Rhine and Frankfurt is often bathed in fog while nearby Mainz, 500 feet higher, sits on a plateau, above the fog. I considered landing at Mainz though, for some reason (might have something to do with forecasts), chose Mannheim out of convenience for hotel purposes.

Finally, by 2:40, the fog evaporated in an instant. I hopped in the plane and scurried off, knowing full well that I would have to do the VFR on top routine again for another 50 miles. As I surfaced the skank layer, I ran into a headwind that I did not expect, which meant that I would not make it to Saanen for the night. In the middle of flying, I found an alternate at Ecuvillens, filled out elaborate customs forms in French on my phone, cancelled customs at the other location (also on the phone), and reconfigured the flight plan with French ATC.

The rest of the flight was straightforward, down the French side of the Rhine to Basel, Switzerland, over the clouds covering the Jura, then down the middle of the Mitteland in Switzerland, with the Alps in view, bathed in sunset light. It seems odd that a chunk of VFR on top could be described as normal, though so be it. I hope to not make a routine out of the practice.

The next morning, I came for the airplane at Ecuvillens and took a little joyride to Interlaken on the way over the hill to Saanen. It was pleasant to notice that the snows had finally come in my absence. After landing, I pulled the PA-11 out of the hangar, preflighted, and took a ride around the foothills of the Alps for posterity. There is only one first time when the two planes are together; memorializing it with a second flight seemed appropriate.

VFR on top in the Fatherland. Note the industrial stacks sticking up above the clouds. 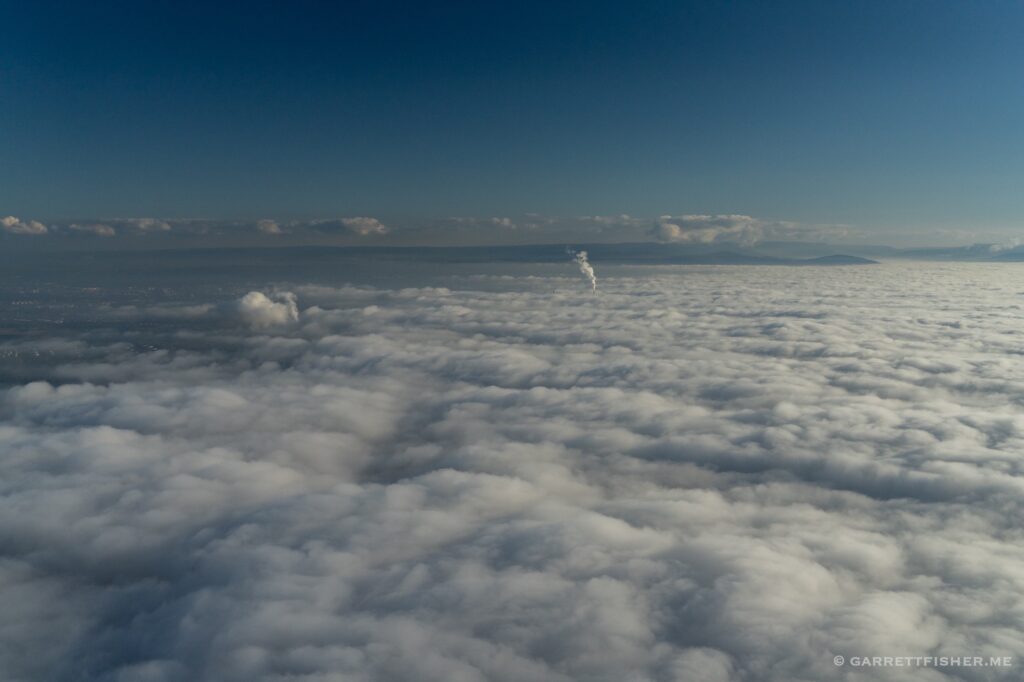 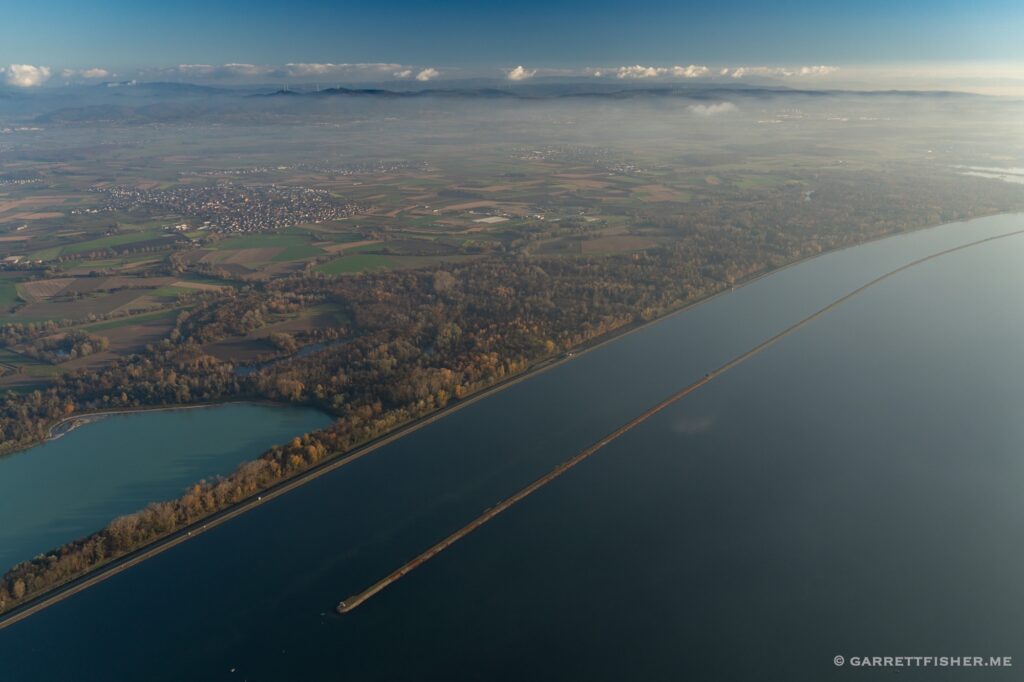 Rhine again, from France. Thick haze was morning fog earlier and will become so again overnight. 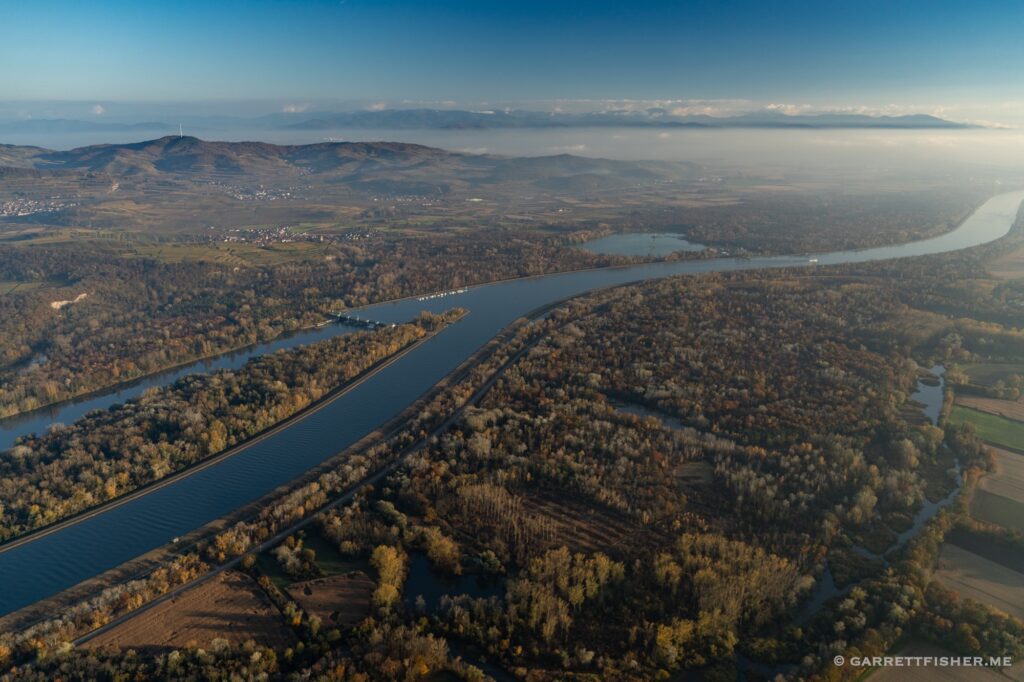 South of Basel, in the country known for chocolate, cheese, and tax evasion. 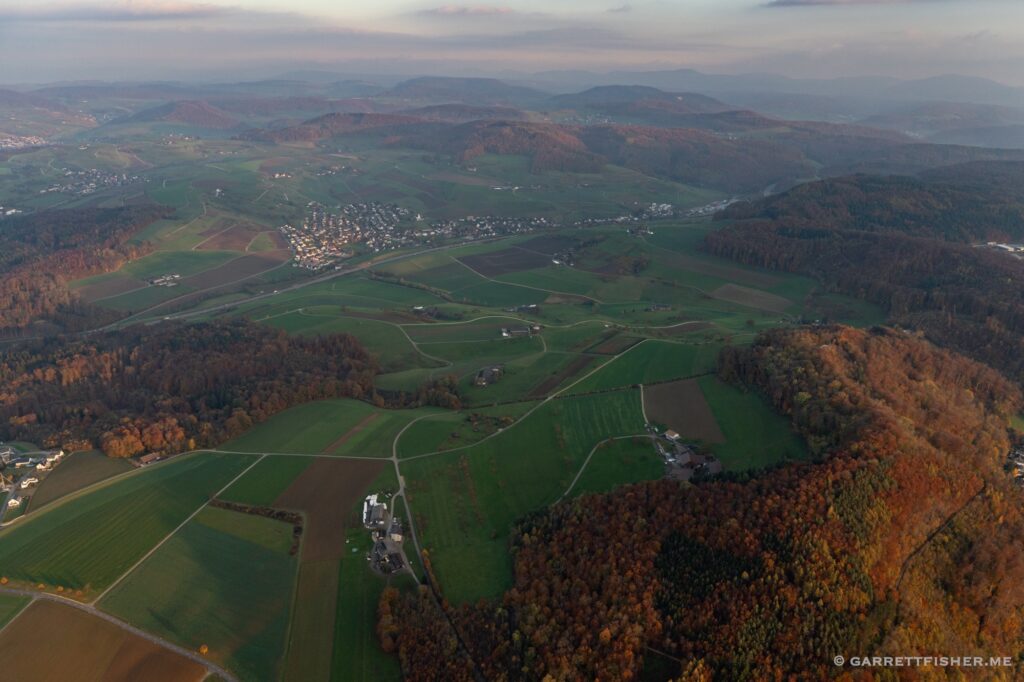 Over the Jura Mountains, with the Alps on the horizon. 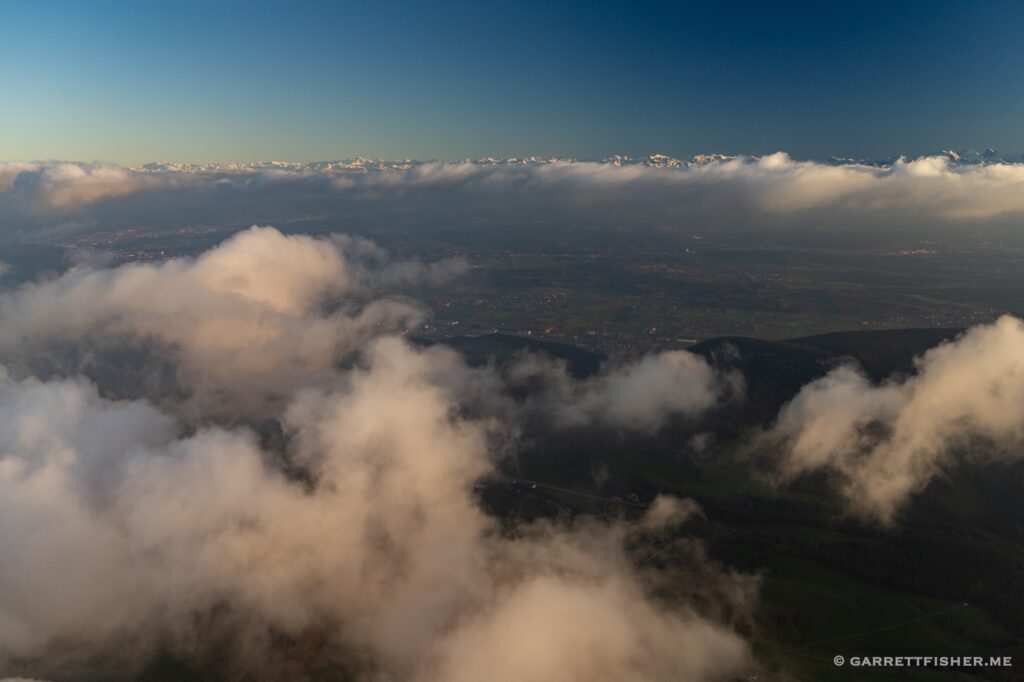 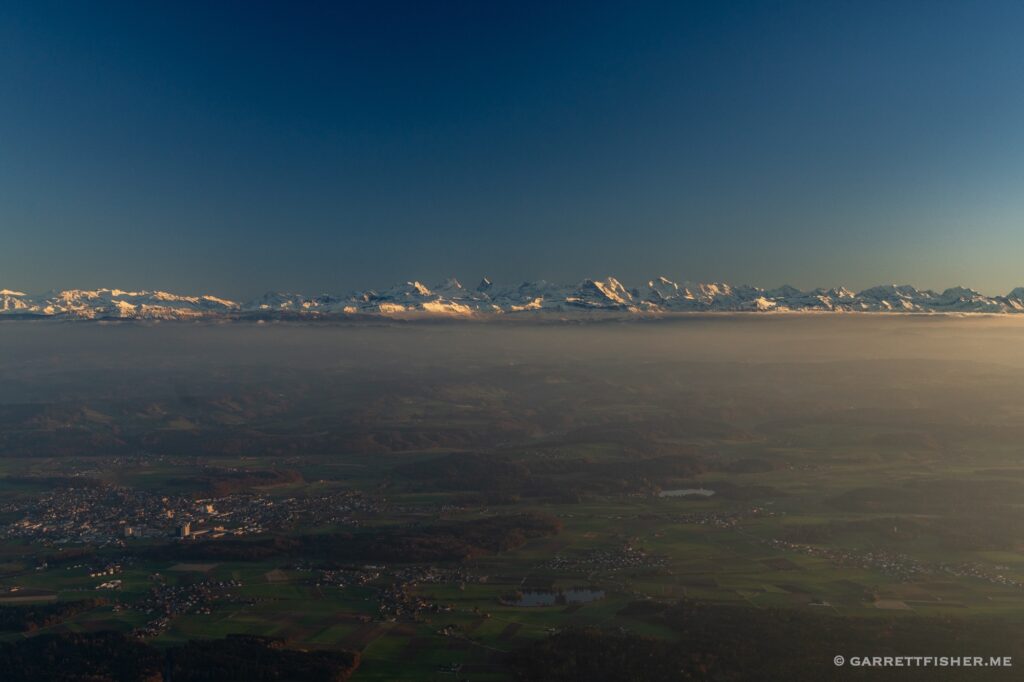 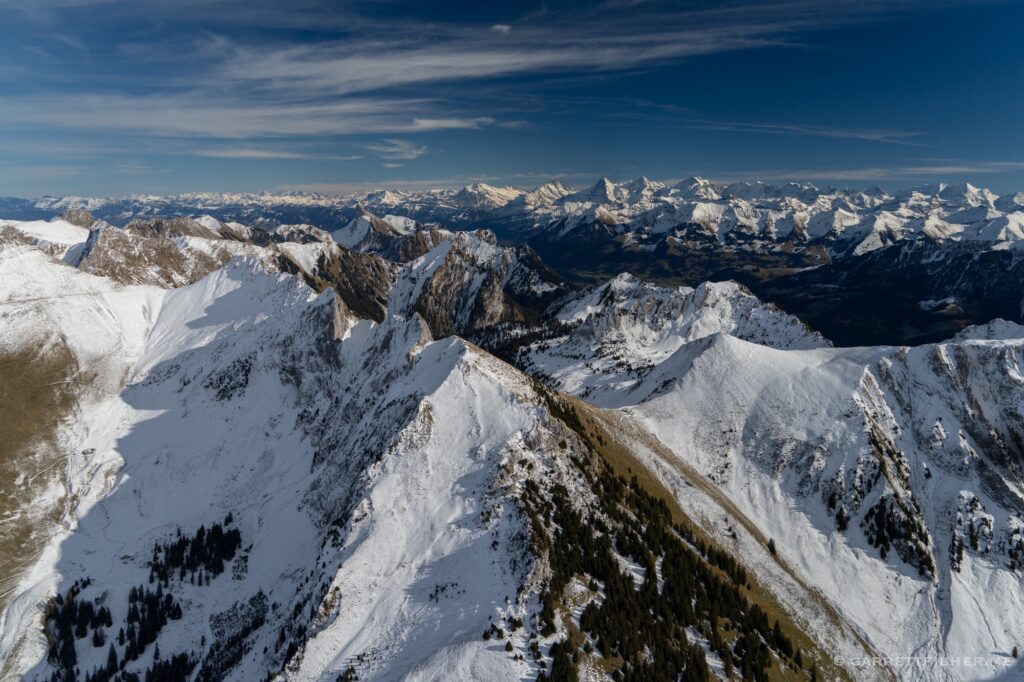 Thunersee and Interlaken, for posterity. 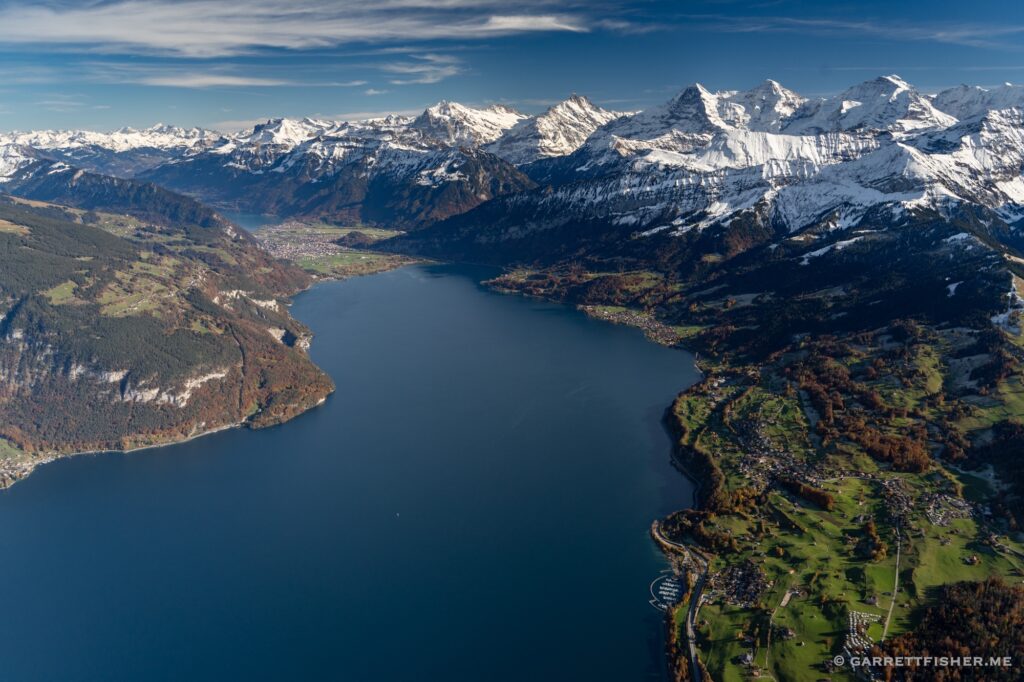 I hiked the foreground ridge in the fog a month before. Had I lost my footing…. 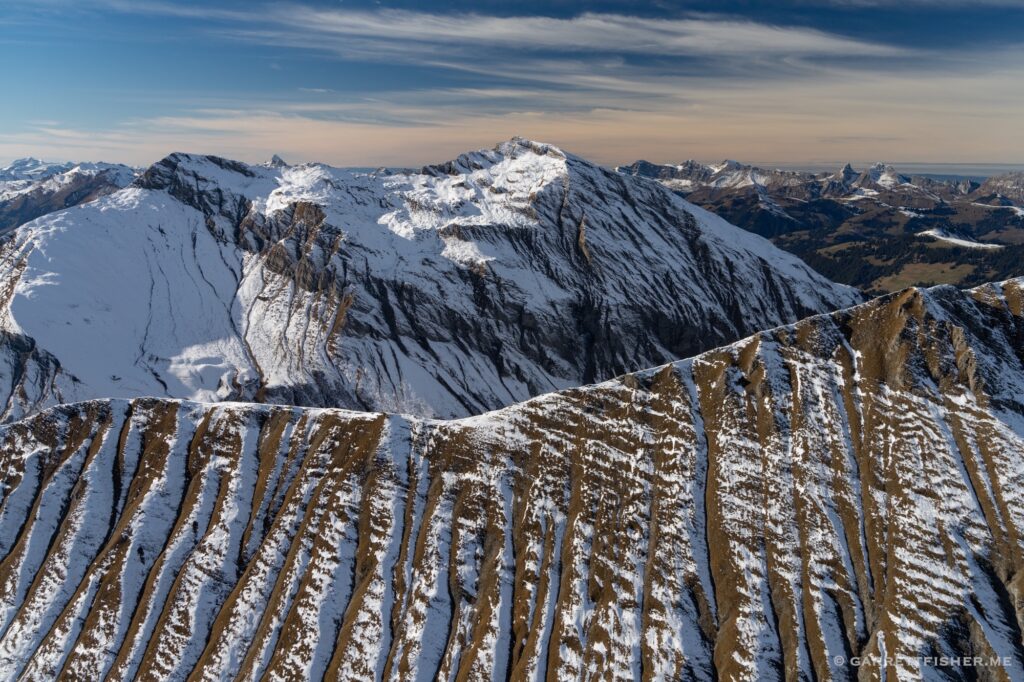 Gummfluh, from the PA-11. Why have one airplane, when one can have two? 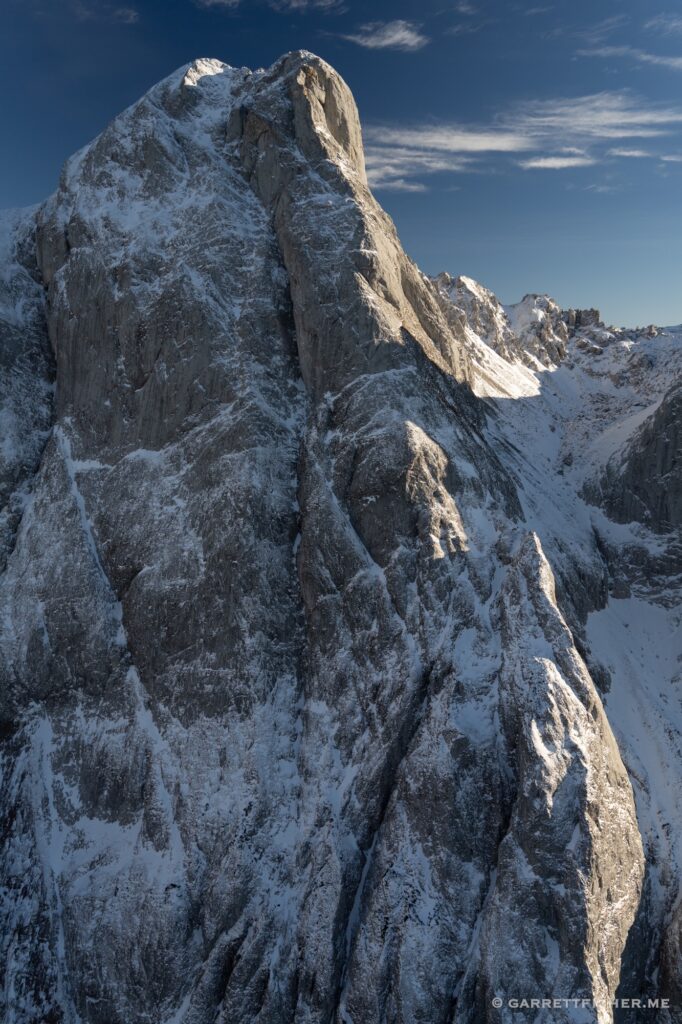