Weather forecasts are, to say the least, imprecise in the Rockies. Moisture is limited, may or may not show up on radar, and rams into localized terrain, dumping prodigious amounts of snow in fickle locations with sometimes minimal predictability. The forecast earlier in the week had called for some glorious orgy of snowflakes, and we got a cold rain instead (I accounted for this misery a few blog posts ago). The forecast for the prior night called for 1” to 3” inches of snow. Reading the 3 page forecast discussion (yes, I read the 3 page forecast discussion twice per day because I am a weather nerd par excellence), I told my wife “We’re going to get slammed. They’re missing this one.”

Despite my meteorological brilliance, I decided to drive to Jackson anyway the prior evening. On the way back, we smacked into the snow that I personally forecast. All 7” of it falling in a perfect mix of moisture, cold, frozen roads, and treacherous driving.

The next morning, it was partly cloudy. Naturally, I saddled up the airplane (heated hangars are cool) and went up for a ride. I didn’t quite have a “plan” but it would be a foreign notion to think that I didn’t have something devious up my sleeve. With snow showers at the peaks, sun in the valley, ice-cold temps, and mid level puffy clouds, the formula was set to fly around the weather.

I climbed above the clouds as fast as I reasonably could, while enjoying some pretty snow showers to fly through. For the record, airframe icing is completely overrated. There are limited temperature bands where that happens, and I have yet to experience it after flying in falling snow at least twenty times.

Clearing the clouds at 12,000’ feet or so, it was absolutely gorgeous. 100-mile visibility, glorious Rocky Mountain blue skies, and a sea of puffy clouds everywhere. “Is that Grand Teton poking up through the clouds?”

Poking up through the cloud deck about 30 miles away, Grand Teton was, in fact, sticking out about the clouds. I pointed the airplane in that general direction and flew toward it.

A few miles in, I realized I was in the approach path for airline traffic to Jackson Hole. Granted, what I was doing was legal, however it didn’t mean it was smart. Dialing up Jackson Tower, I radioed in:

The controller’s disbelief was quite amusing.

It was absolutely freezing, and I was battling a strong wind, so it took 45 minutes to get to the Tetons. With takeoff temperatures at 10 degrees or so, one can apply the rules about temperature decline at altitude and derive a temperature of somewhere between -22 and -15F. And I have no heat.

Grand Teton above the clouds was the most beautiful thing I have ever seen in this airplane. Some of the work I produced will be the centerpiece of an upcoming gallery exhibit in Jackson, as the work is one of a kind. I can’t show that stuff here, though I can give you one little clue.

Of course, the wind was blowing at a good clip, so I had to fly northwest on the backside of the mountain to get photographs. If I tried to point to the southeast, I zoomed by very fast, and also had to orient the airplane dangerously to execute the shoot. That meant that I was flying with the entire door open, with temps well below zero.

At one point, I thought I got frostbite on my face. Despite gloves, feeling in my right hand wasn’t working. So I closed the door, “warmed up,” and went at it again. This definitely takes the cake on temperature extremes. In fact, it was so cold that the engine would only produce 115-degree oil temperatures, and the cylinders weren’t running all that smooth due to being too cold.

The flight home was over a sea of clouds. I didn’t have the map with me, as I didn’t intend on such a flight. Sure, I had the iPhone and some aviation software on it. I didn’t want to pussy out and resort to using GPS above the clouds. I was finishing this flight by dead reckoning.

After a few confusing moments, I worked it out, sailed over the Snake River Range, and back into Alpine. 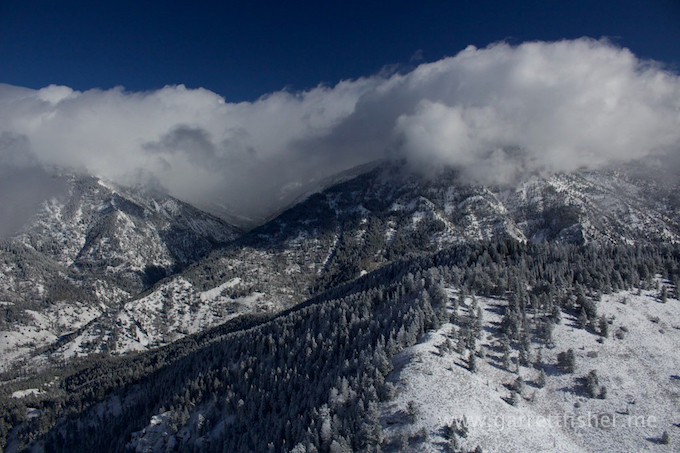 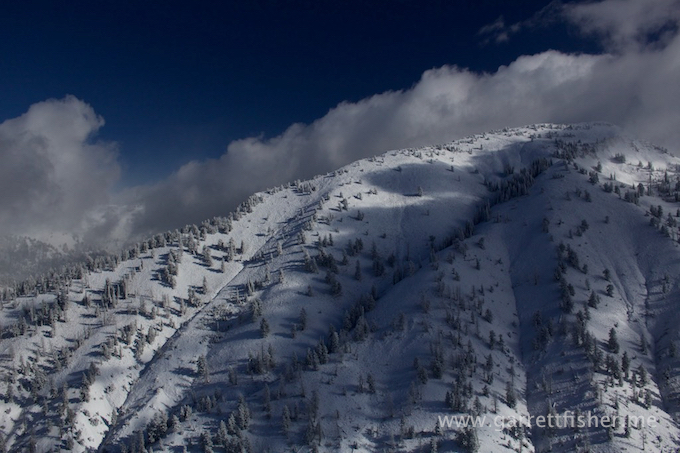 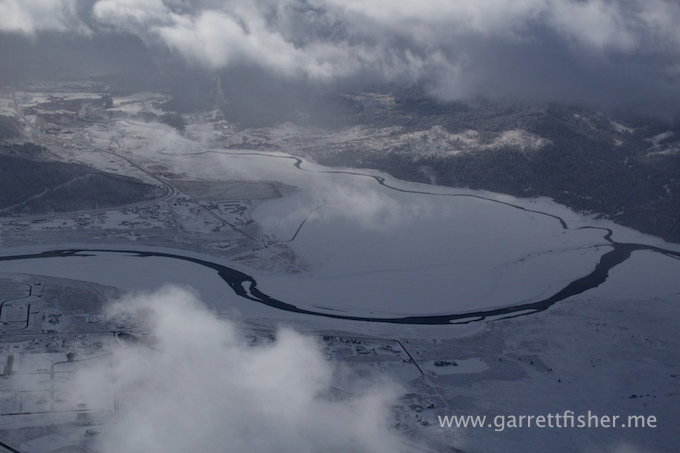 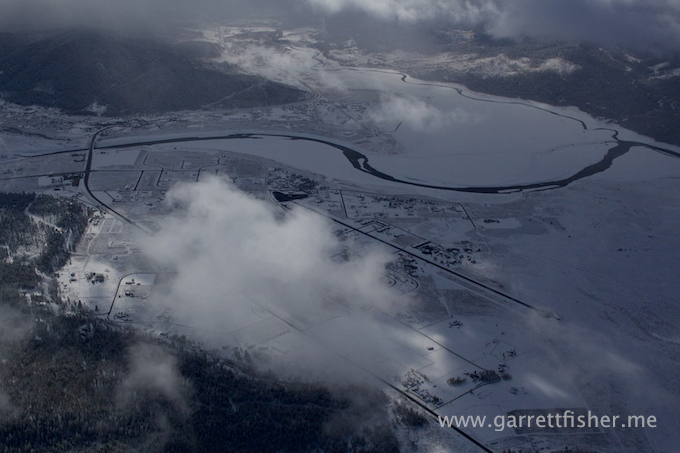 Sea of clouds. This is the general direction I went to Grand Teton. 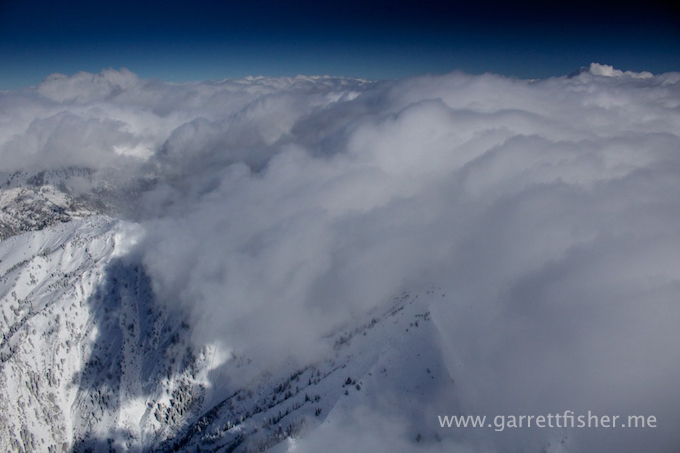 So much for visual navigation aids. 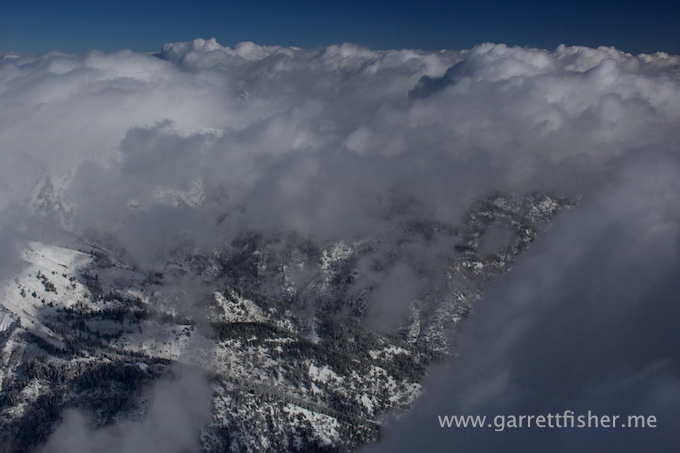 Jackson, WY. The thrill is getting replaced with the reality that I might freeze to death. 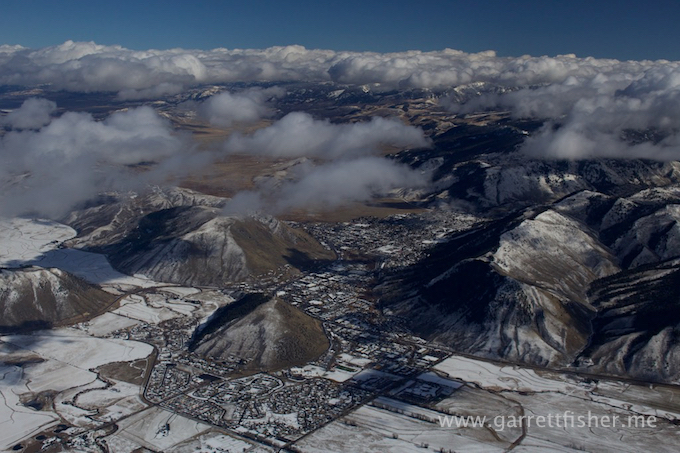 Grand Teton (13,770′) peaking above the clouds. This is just a preview. Only a rational pilot would fly into this stuff. 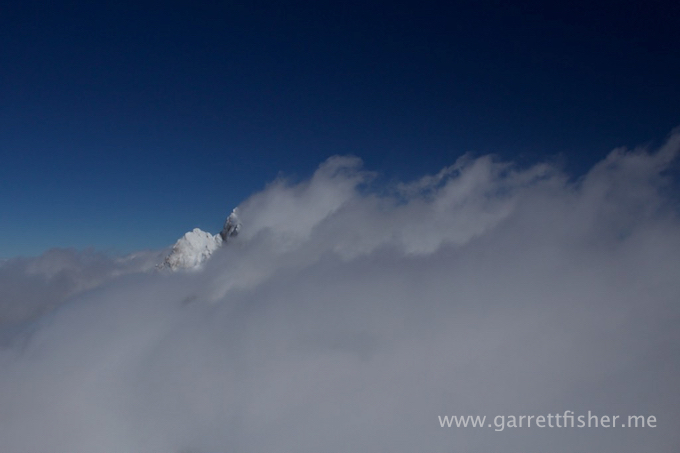 Home is somewhere over there. 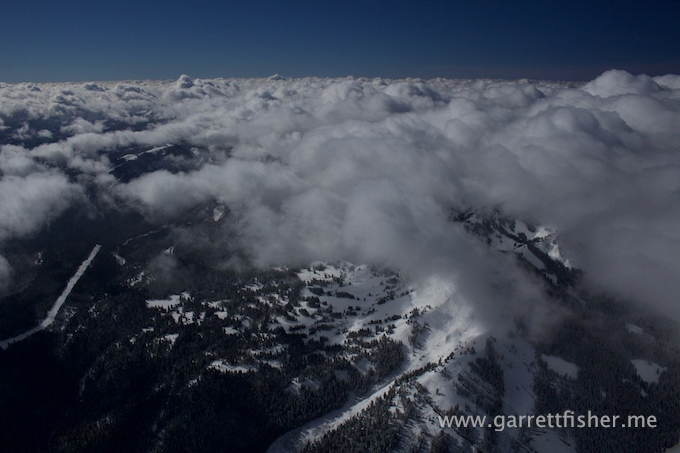 The heavens opened so I could get this shot of Jackson, WY. The engine is too loud to hear the angels singing. 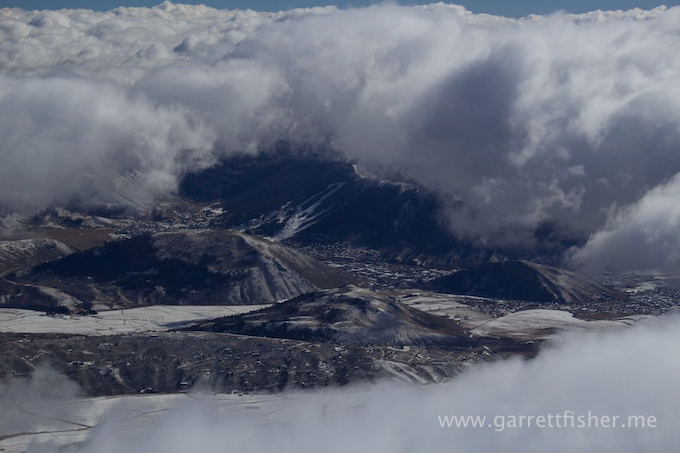 Snake River Range. The clouds make the Idaho border even more indistinguishable than it already is. 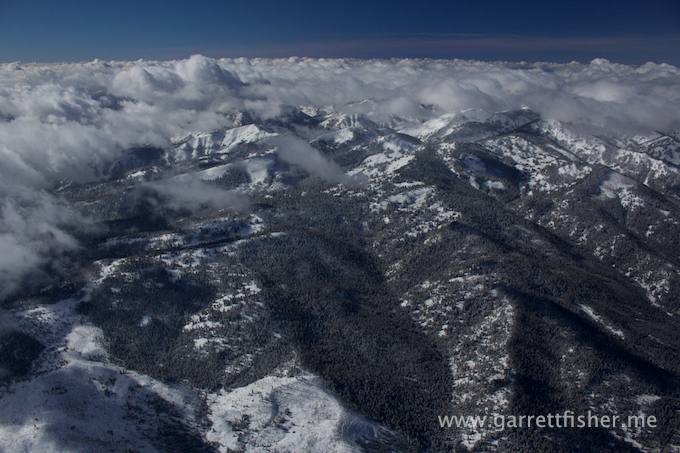 This visual navigation thing is really confidence inspiring as to my location…. 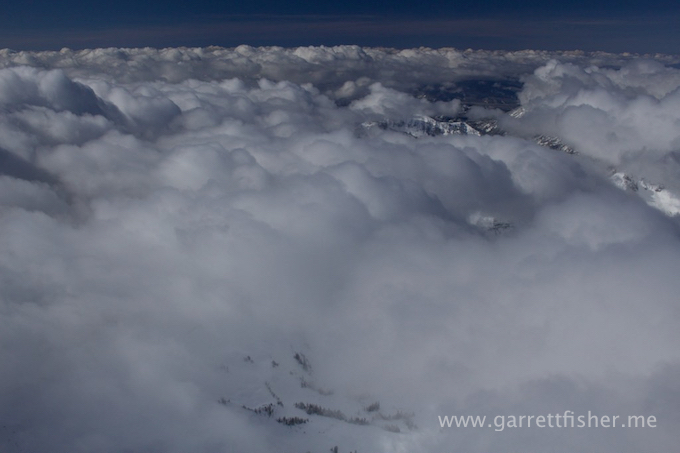 This lovely reminder of wilderness terrain is a helpful clue as to where I am. 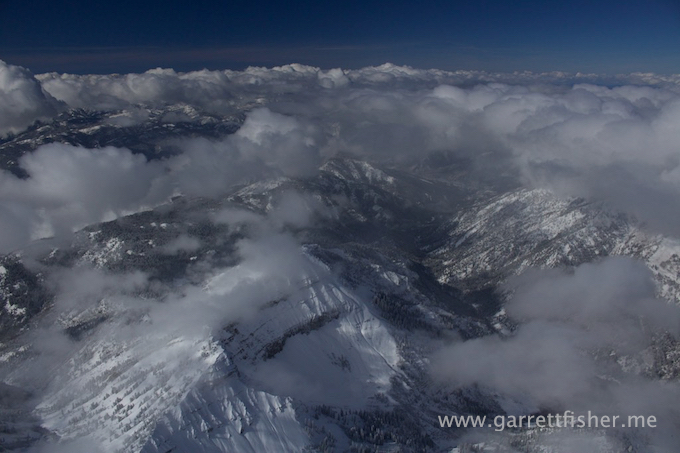 Now what is that over there? 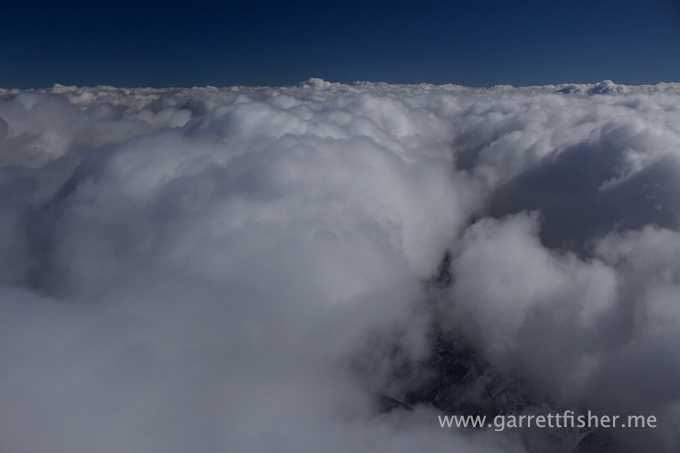 Ah ha! The Snake River Canyon and US 26. 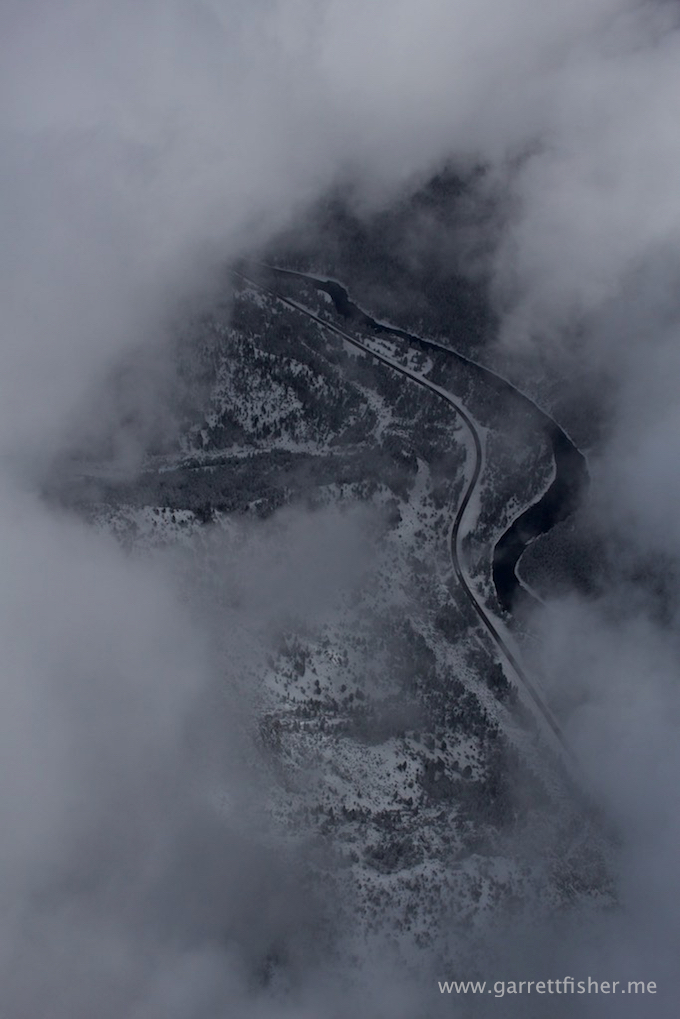 Coming around the bend into Alpine. 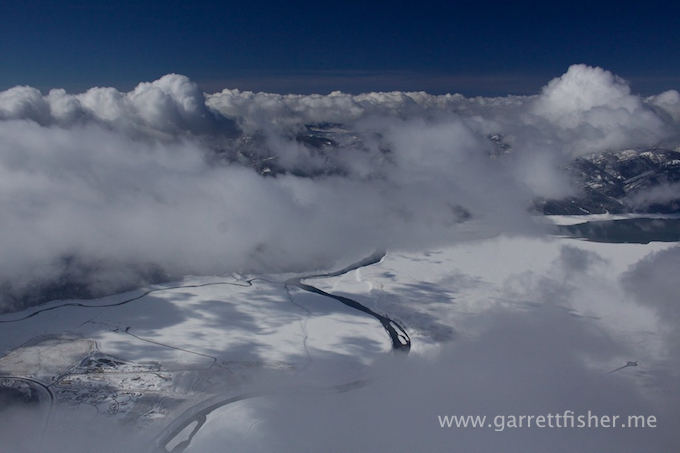