While I had not heard of such a thing prior to visiting Europe, nor do I hear much about it from sources other than my ramblings, inversions are apparently relatively common on this continent. Part of it likely has to do with somewhat placid maritime weather, whereas the bigger contributor is terrain. California and its famous fog is the closest North American equivalent to terrain and inbound western moisture.

For those who have been reading the blog for years, it is noted that I used to rant quite a bit about it in Spain, then grew to appreciate the beauty of the inversion, so long as it was down below and not defiling my day-to-day life. In the inhabited sections of the Alps and terrain beneath, inversions abound, so much so that it is a common pollution consideration, as air gets trapped and contaminants pile up. British people regularly get tricked by it, with stories of Londoners wishing to “move to the mountains where the air is clear” to escape London’s own diesel-infused winter inversion. They come to Chamonix, France, and then discover that their child’s asthma is now worse, because the air simply gets trapped in such deep valleys.

To me, it is odd. I am so used to strong storm systems with abundant energy blowing entire air masses out to sea, whether it was NY, NC, WY, or CO, it seemed to be that when terrain created fog or orographic lift, it did it in a way that did not trap the air mass. I suppose the alternation between dry Canadian air and moist Gulf or Atlantic sources is the key. A cold front out of the north in Europe, while it can be drier, often brings cool, moist air instead of warm, moist air. Cold, dry air from Russia is not common in Western Europe, so there you have it.

Now how does this fit into flying? There is a persistent inversion over Lake Geneva in winter. In the autumn, it merely sneers at me, demonstrating that clearer air is above, whereas humid defilement sits below. In 2018, it sent me on a rampage, though in 2019 I got smarter and figured out there is a thing called “webcams” and I can discern the top of the layer and either fly or drive above it.

This flight punctured the inversion, went over Lake Geneva, around the Chablais Alps, into the French Pre-Alps northwest of Portes du Soleil for the first time, and came back to the airport via Col du Forclaz.

Skank layer over the Rhône Valley. 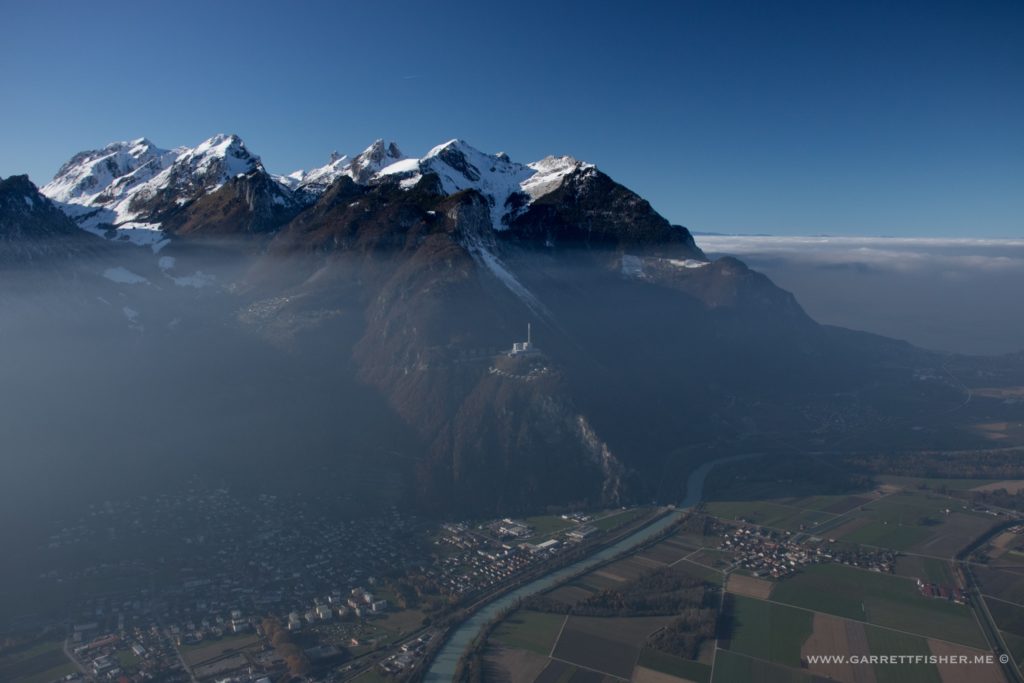 Haze now turning into clouds against the Chablais Alps. 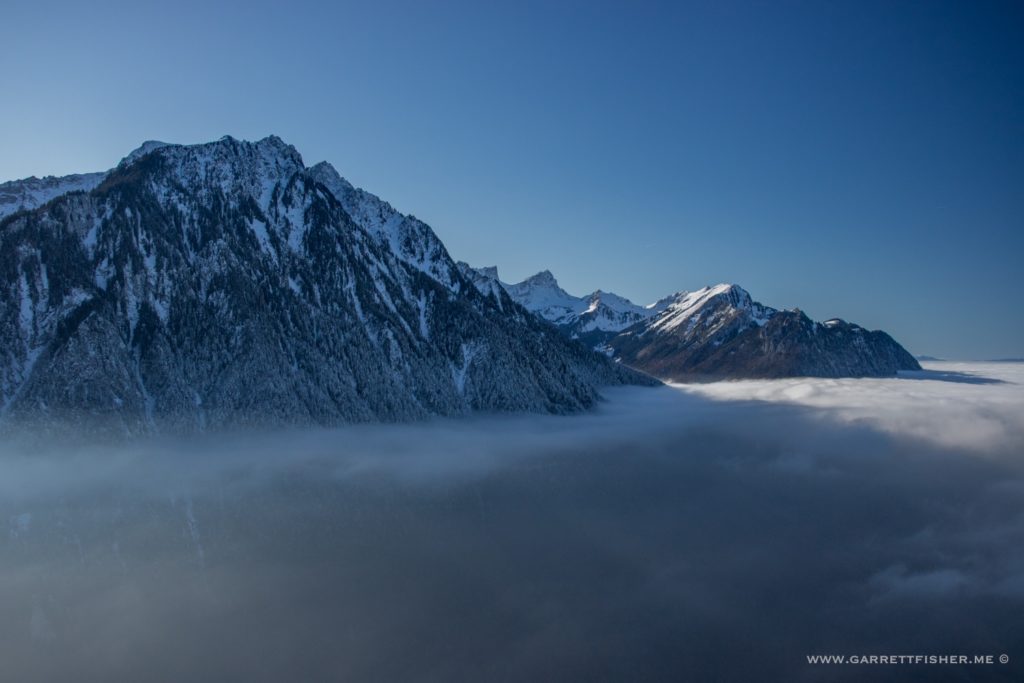 Where the magic happens….

Its VFR on top! 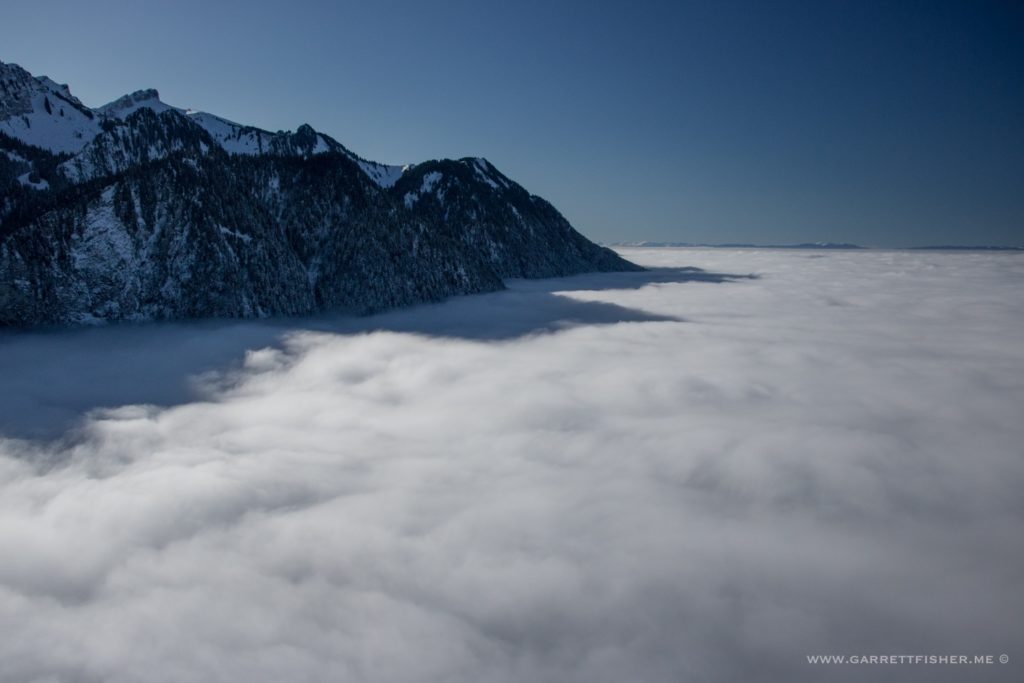 From where I came. Technically there were a few holes behind me. Should the engine have quit, I could dive through them and then have about 3,000′ under the cloud deck before landing either in the lake or in an otherwise inhospitable location. 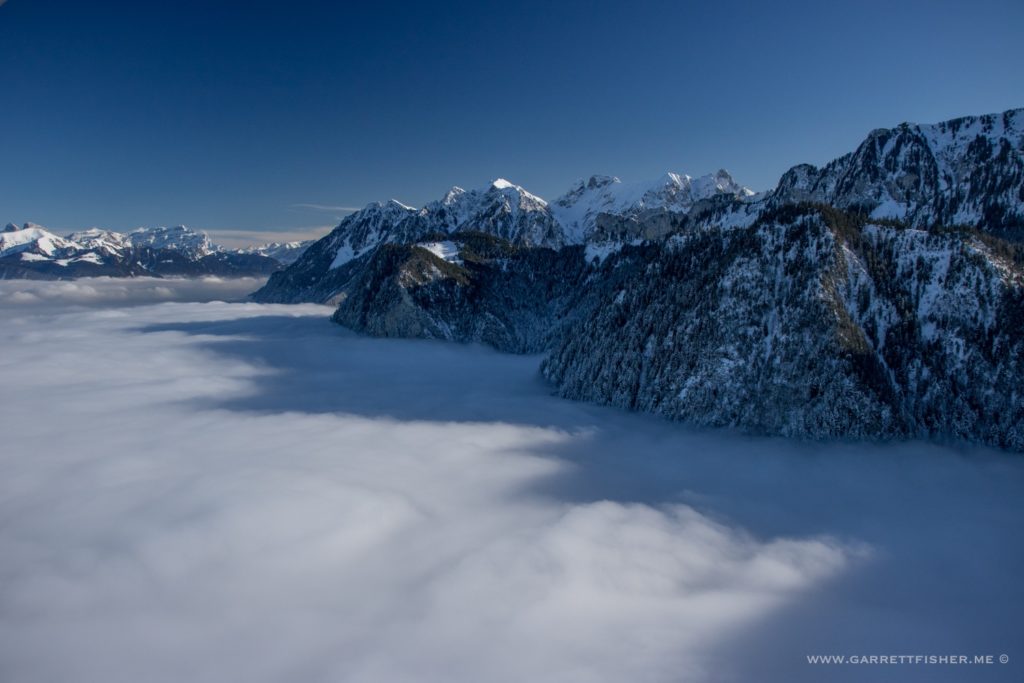 Island in the sky. Above Evian, France, which probably means you’re looking at the source of its famous bottled water. 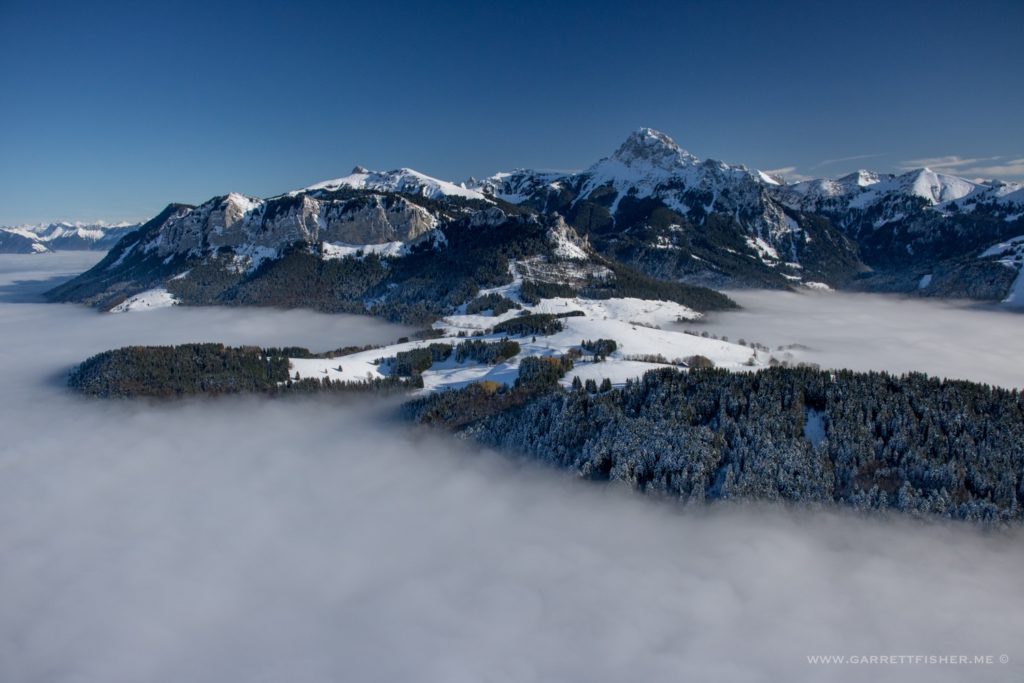 Looking up the valley toward Morzine and Mt. Blanc on the horizon. This is the same inversion layer, except no clouds. “Clear mountain air” that ensnares British people looking for a better life. 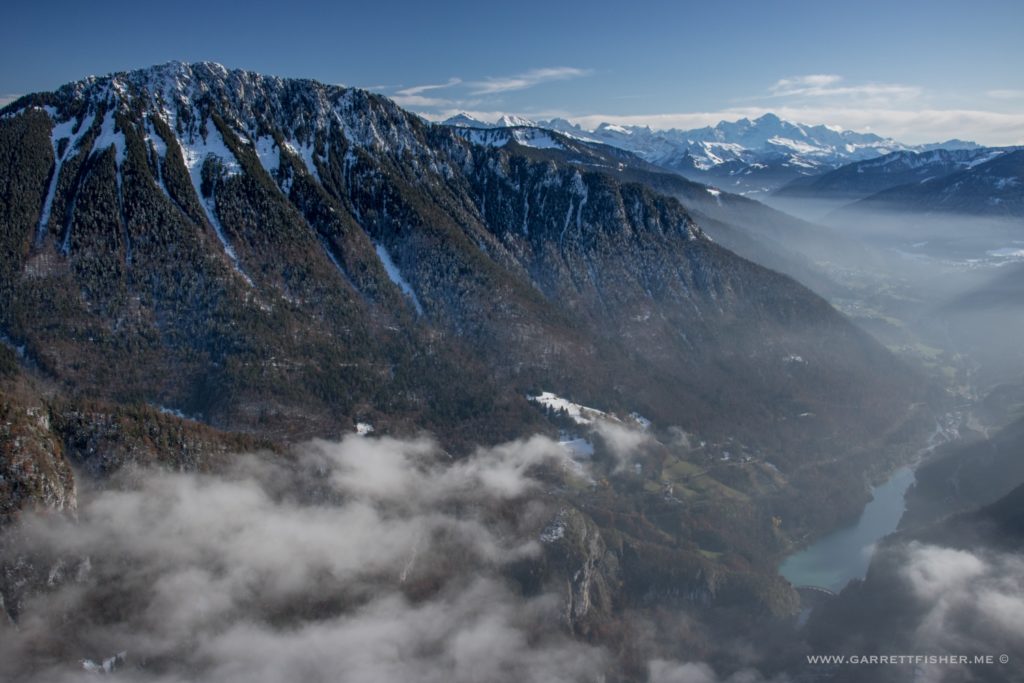 Pre-Alps looking back toward Lake Geneva, with the Jura Mountains on the horizon. An excellent example of how these inversions work. 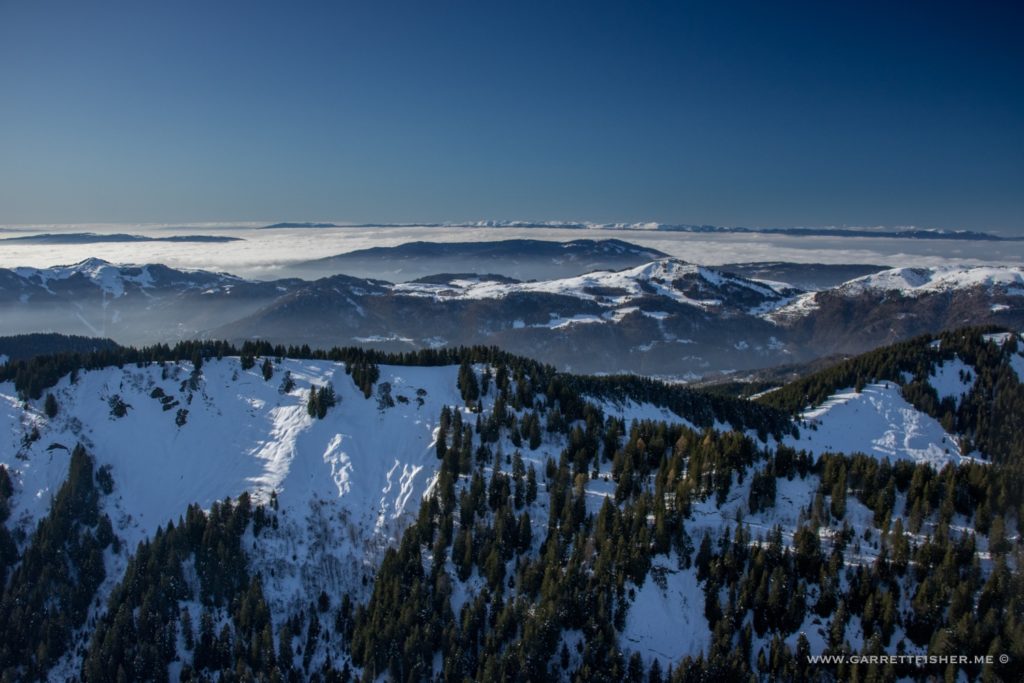 Mt. Blanc in the distance again. 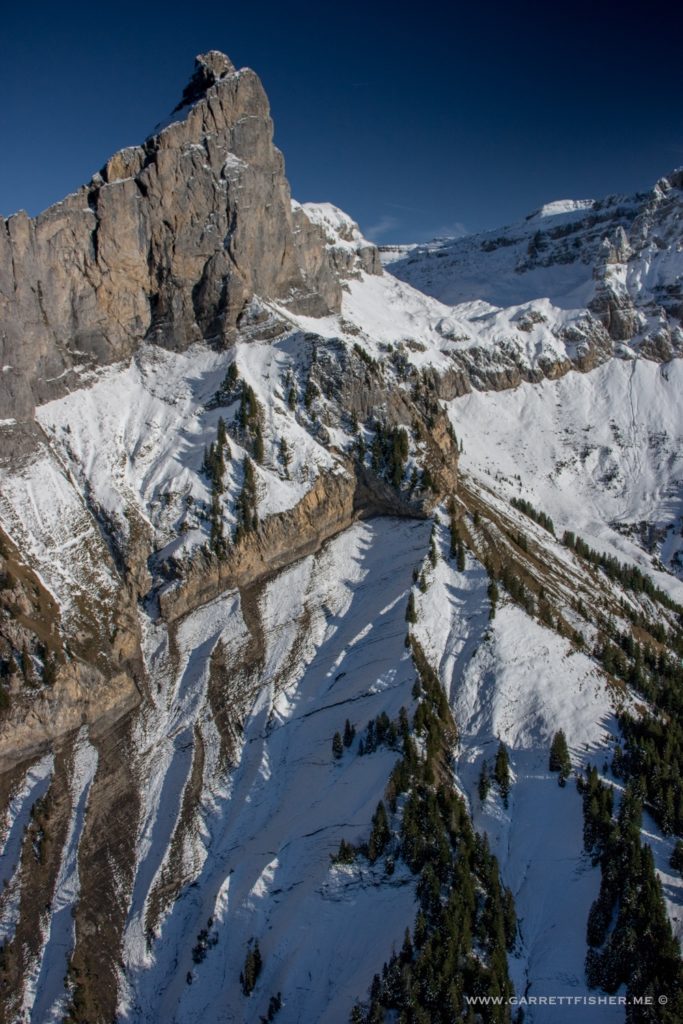 Above Sallanches, France, with Mt. Blanc in the background. 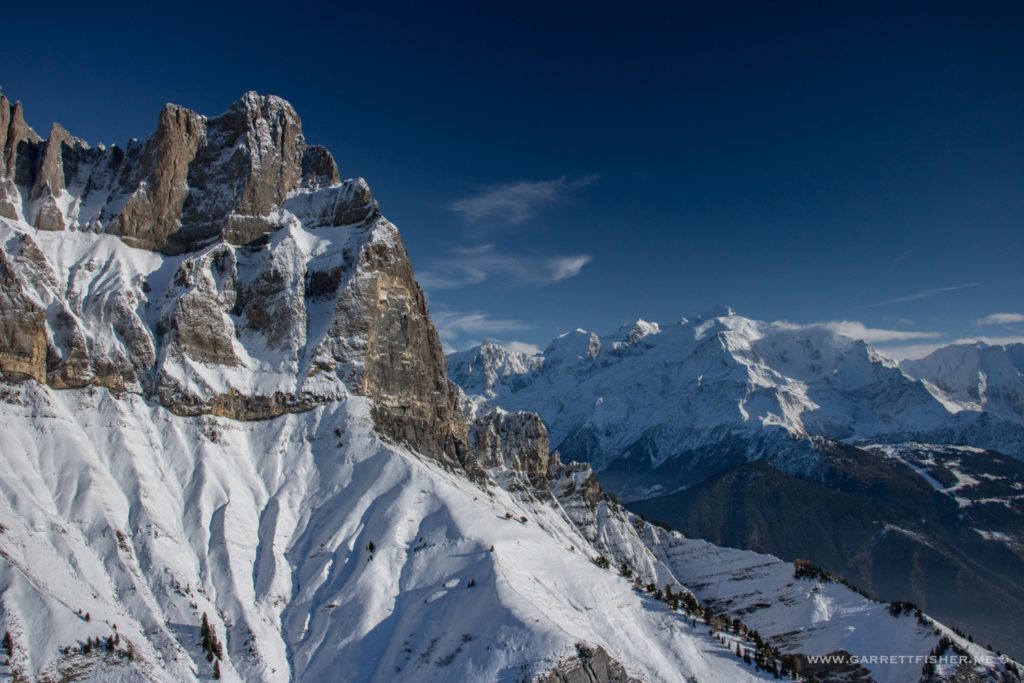 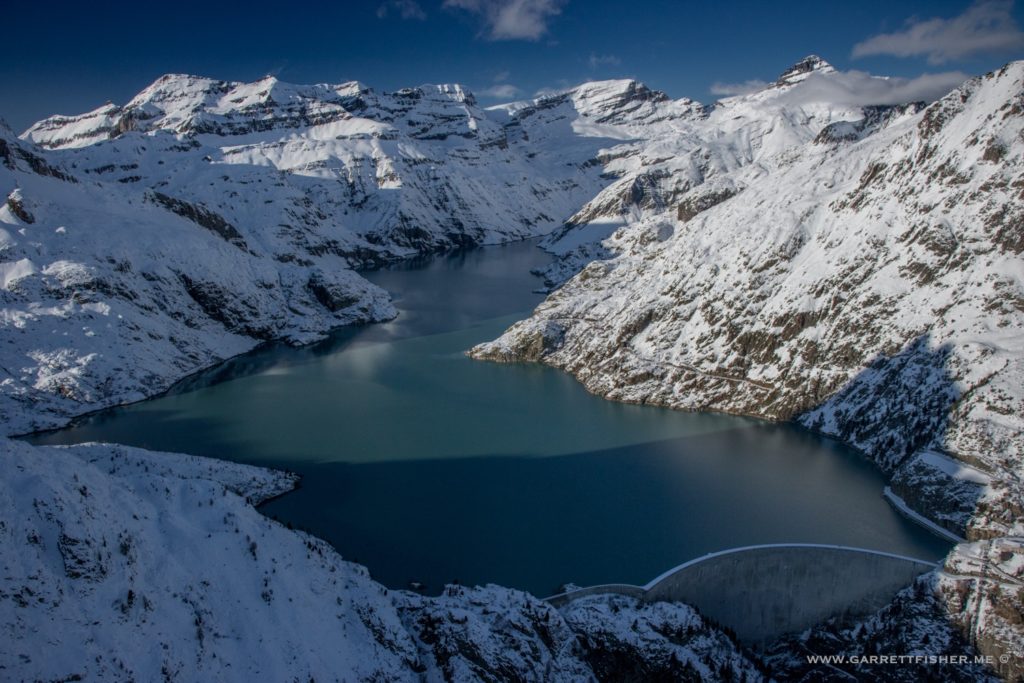 Descending down into the skank layer.