Note: Abbreviations in parenthesis are the Swiss cantons overflown. In this case Vaud, Bern, and Valais.

There is an essence of Switzerland that I struggle to understand from the air. While one can fly from point to point in measurable and often small distances, it is not often the point itself but the altitude that defines the nature of the destination. To visit the famous village of Interlaken or to go the Jungfraujoch are separated by less than 10 miles in distance and roughly 12,000 feet in elevation. Interlaken is a temperate habitable climate zone, whereas the Jungfraujoch sits on an ice cap. Both are places that can be visited on the ground, with understandably varying complication. The situation in the air is similar.

Because the Cub is powered by a small engine, and fuel range is three hours at normal cruise, with even less if one is climbing at full power for most of it, when a destination in Switzerland is chosen, one must do some altitude planning, largely restricting the flight to the altitude of the destination in question.  If said locale is high up, then I am obligated to find something useful to do for 90+ minutes of climb and descent. If it is low and remains anywhere near terrain, then one must plan how to get there and work around obstructions.

The plan for this flight was something different. Since I am on the Oberland side this time, weather is usually more questionable, though terrain is more varied that Sion. Sion, where I was based for last year’s Swiss adventure, is in the Rhône valley, which runs east-west for most of its time in the Alps. That puts it in a different climate zone, which is more favorable, though otherwise sets the tone for each flight, by putting 9,000’ terrain north and south. Any flight of any reasonable objective involved climbing over that terrain.

That was particularly discouraging toward doing flights like I intended on this day. To climb to 10,000’ only to descend to 6,000’ to play around the base of the Jungfrau, then climb back up, and descend down to 1,582’ was both a bit silly and rather consumptive of fuel. Thus, it was not an event that took place last year. Since I am on the north side of the Alps, there is a lot of variety to see on the way, and things like this make more sense.

The problem, which I am still working on fully understanding, is the weather. While there is a nice orb of yellow sunshine on the forecast map, that holds true over various towns and airports. Merely a few miles from these valley destinations, Oberland elevations can shoot up to rather steep heights (valleys 1500’ to 3500’ – summits 7000’ to 8500’), which means that weather varies significantly over a short distance.

That was proven after takeoff. Clouds were forming off of ridges, and much denser toward the Bernese Alps. I found some gaps in Oberland terrain and weaseled my way around towering clouds, eventually getting above them as I worked along the ridge from west to east. It didn’t take long to make the determination that I would not be flying far beneath the Jungfrau. Whatever I did would require getting above the clouds, which I determined was fine in light of the fact that scenery was stunningly beautiful.

There was a moderate north breeze at altitude, which meant that clouds dried out on the south side of the first Alps ridge. That meant an escape path to Sion should it be necessary, though such winds did discourage wandering over to that side just for fun. Generally, there is a downslope component with rotors on the lee side, and it makes for a fight to get back.

Eventually, I got partially above the clouds at 11,500’, and finished the job at 13,000’ realizing how futile my scheme to fly far below the Jungfrau was. Clouds were much thicker over Grindelwald and Lauterbrunnen, though it was extremely photogenic at altitude. I chuckle to myself as I reflected on the fact I told my wife that “I won’t be flying over glaciers at 13,000 feet.”

Over Sankt Stephan in the Oberland. Generally just a summer day. 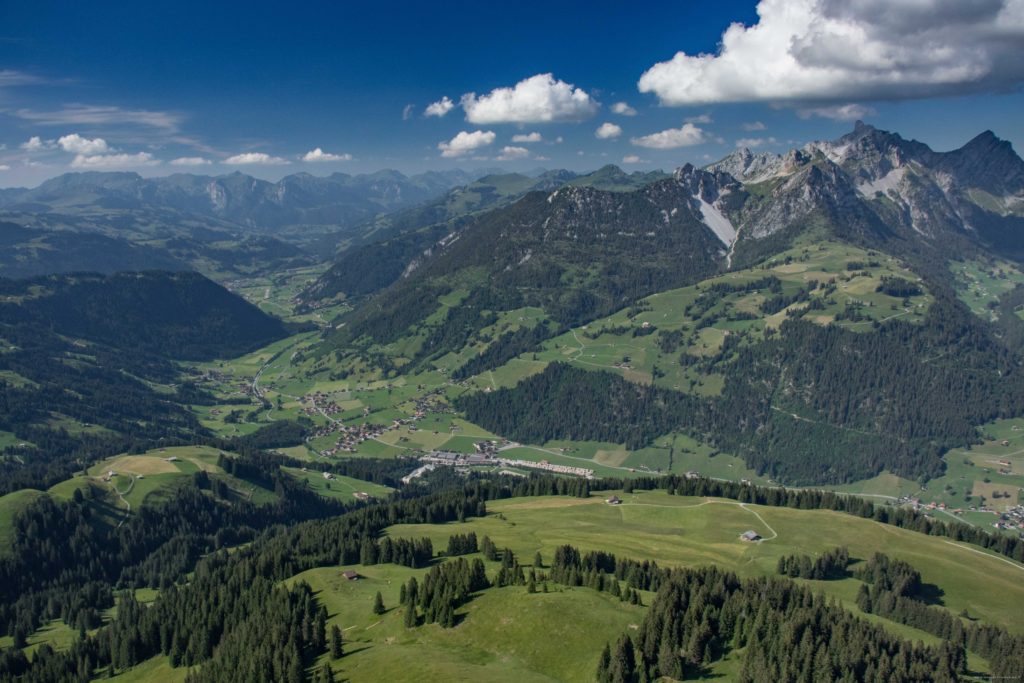 Not so summery ten miles away.

Found a way above it, now along the ridge of the Bernese Alps.

I don’t know that this is “classic,” though it does show a lot of elements of weather over the Oberland and Alps. Oberland is left, with typical haze in summer. Alps are to the right, and cloud formations are sometimes mysterious in the middle. 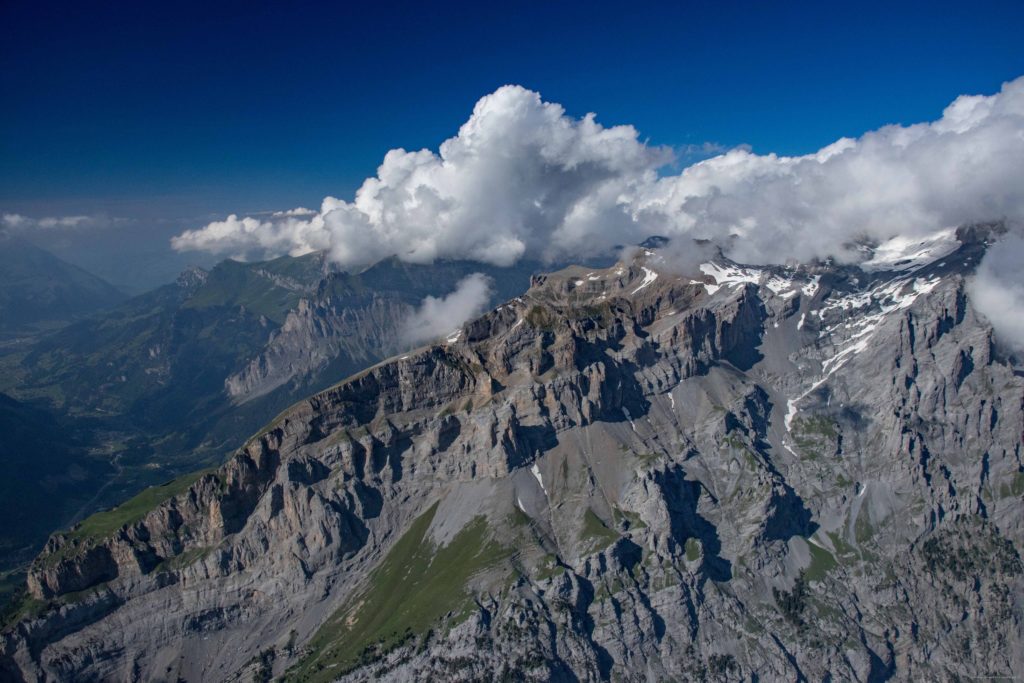 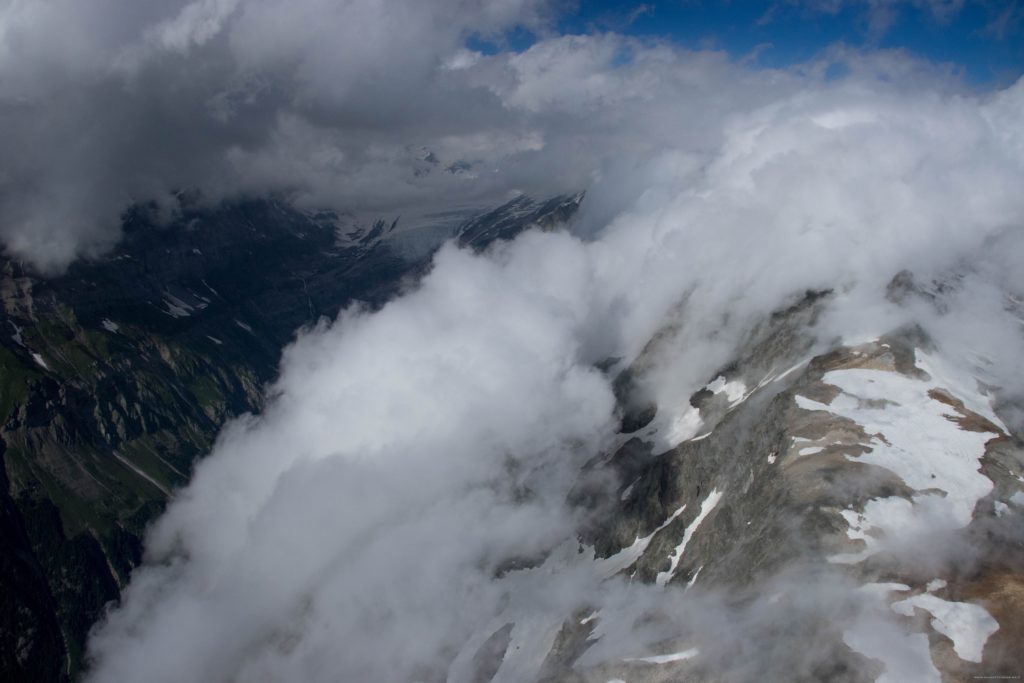 Untertalgletscher, or something like that, trying to hide in the clouds. Its a pleasant sight in summer. 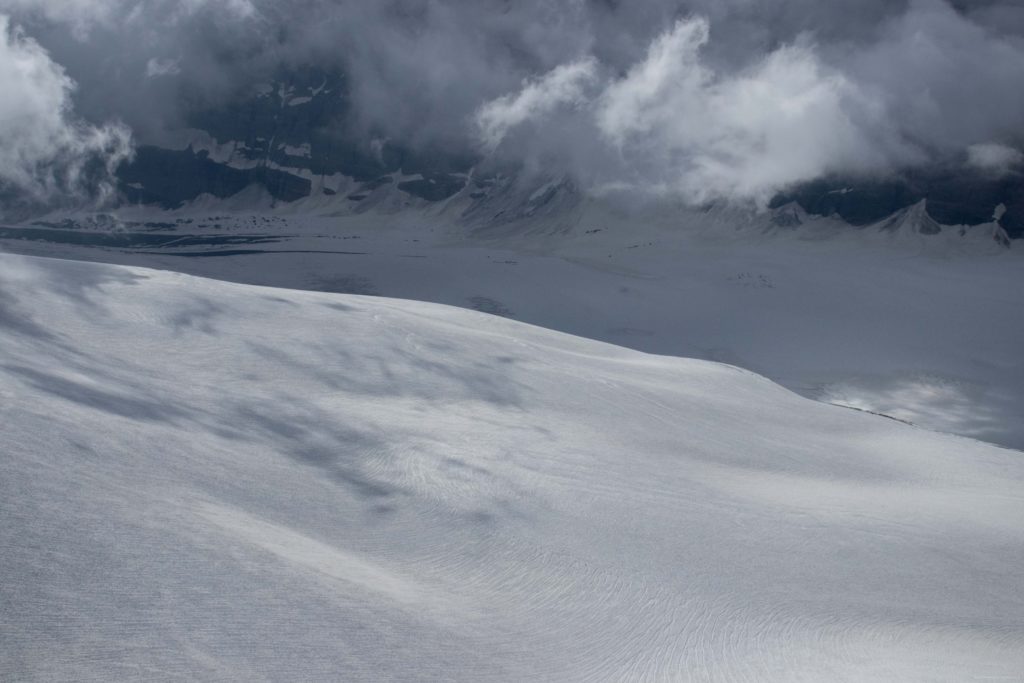 Now up at 12,000 feet, having scratched the idea of flying down there and looking back up. 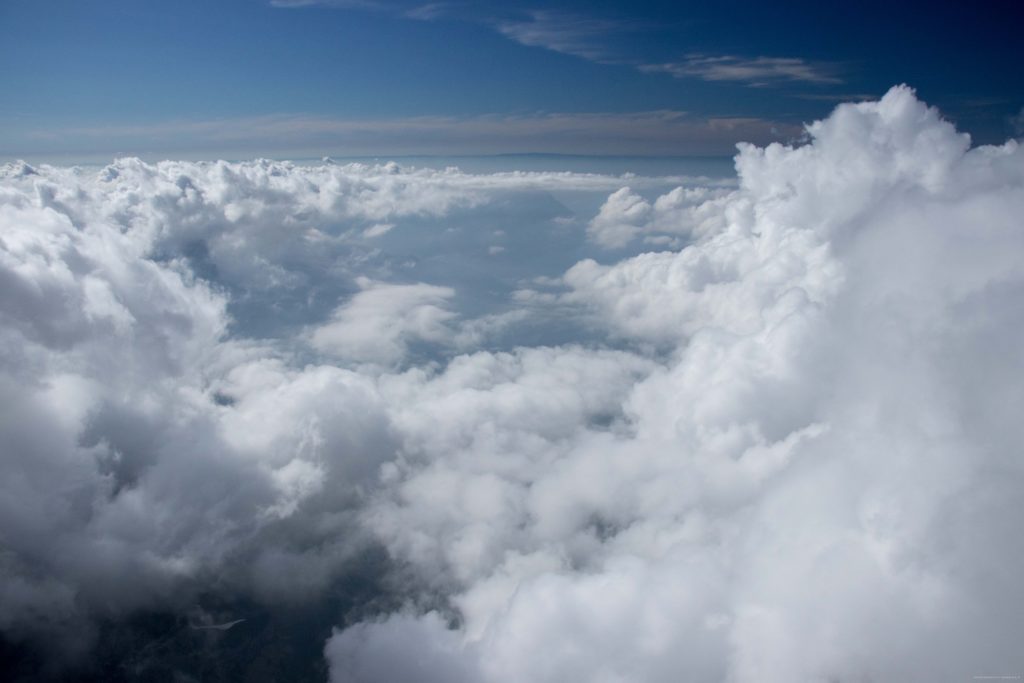 Mönch with clouds forming on the lee side. I have a large collection of images like this from mountains all over the place. 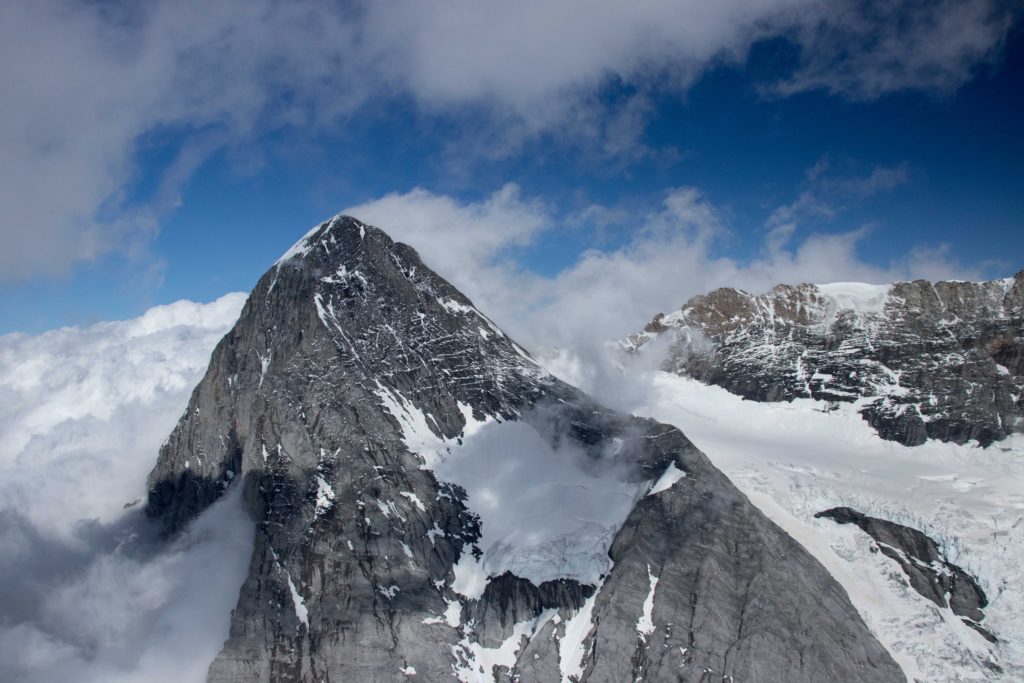 Jungfraujoch, the place one can take a train to, is hiding in the cloud in the center right. 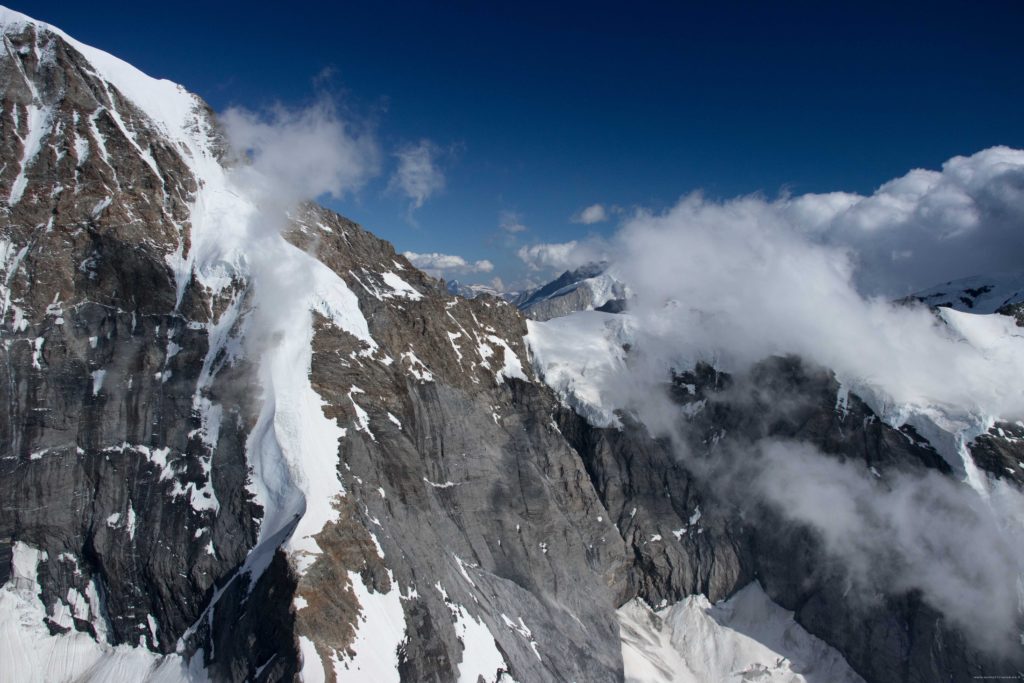 Jungfrau. I suppose I technically did get to fly below it and look up. 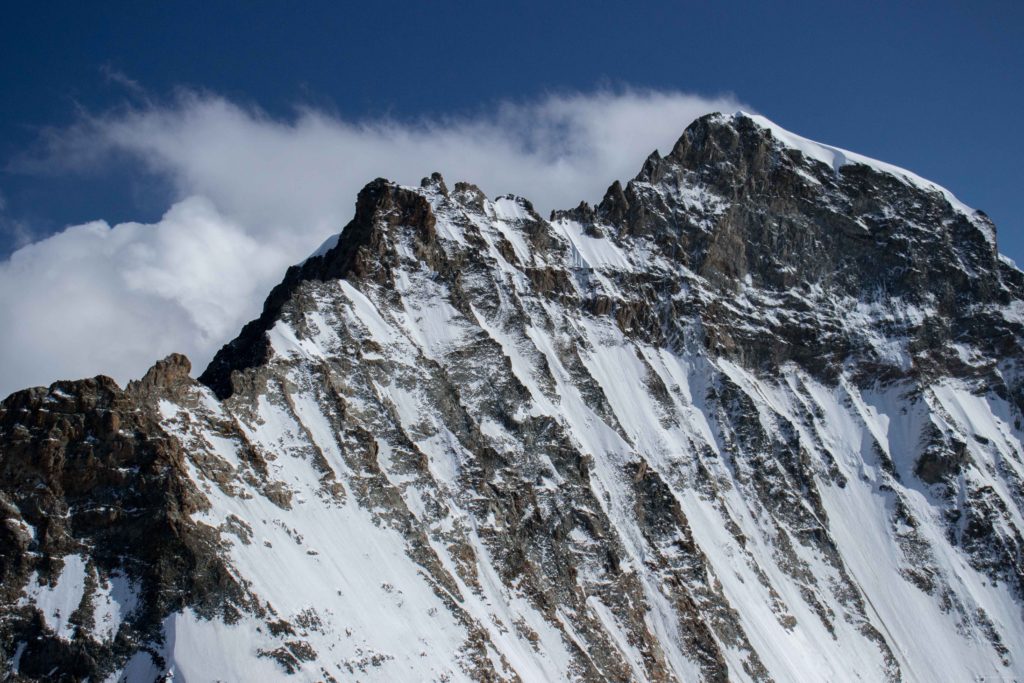 Looking down through a cloud layer to a glacier. 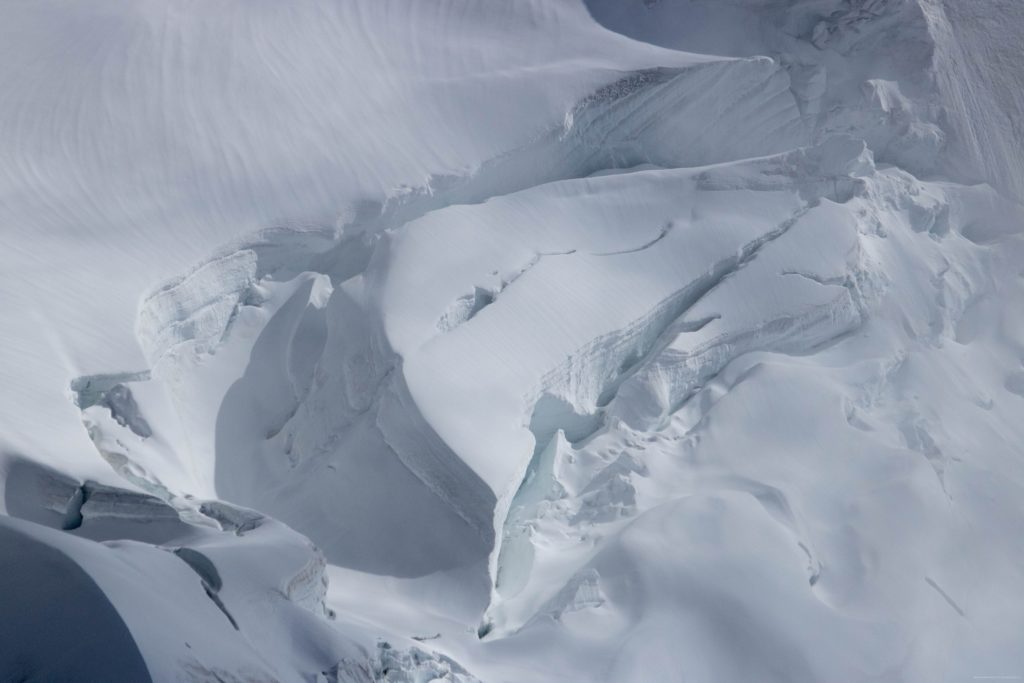 Looking toward Grindelwald. Cloud coverage, as measured by percentage, is not overcast, though its enough to thwart flying at that altitude. 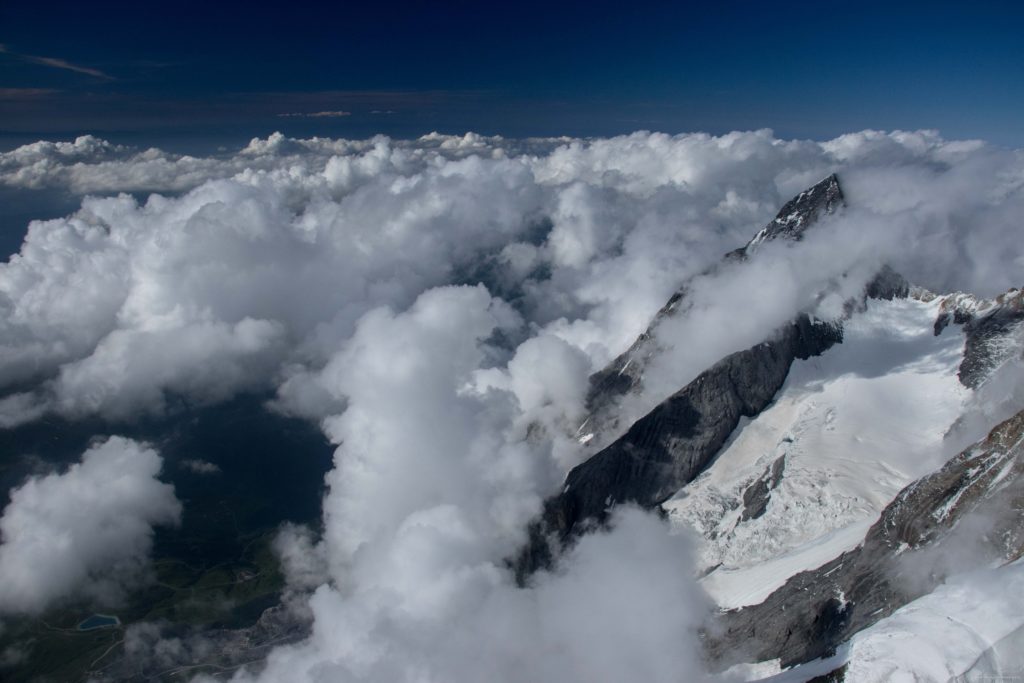 Somewhere west of Stechtelberg. I confess to a simmering fatigue trying to figure out which exact peak it is. It would help if it wasn’t surrounded by illustrious, visually titillating cloud formations. 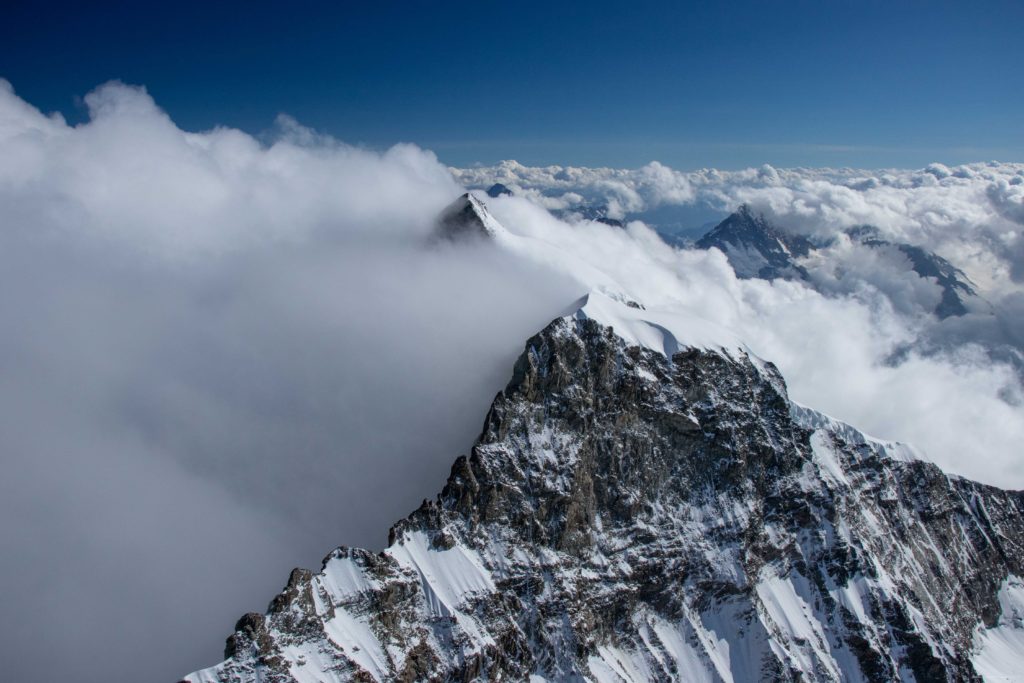 There are so many interesting glacial formations in Switzerland that one could get dizzy and literally engage in reverse peristalsis looking at them all. 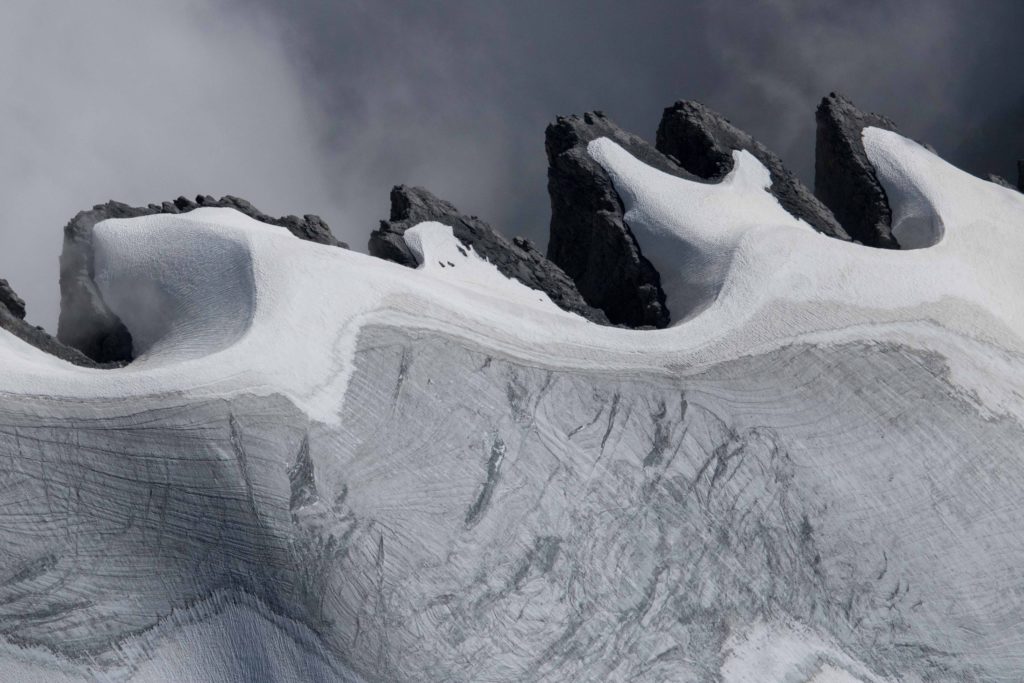 Working my way down the ridge toward the airport. 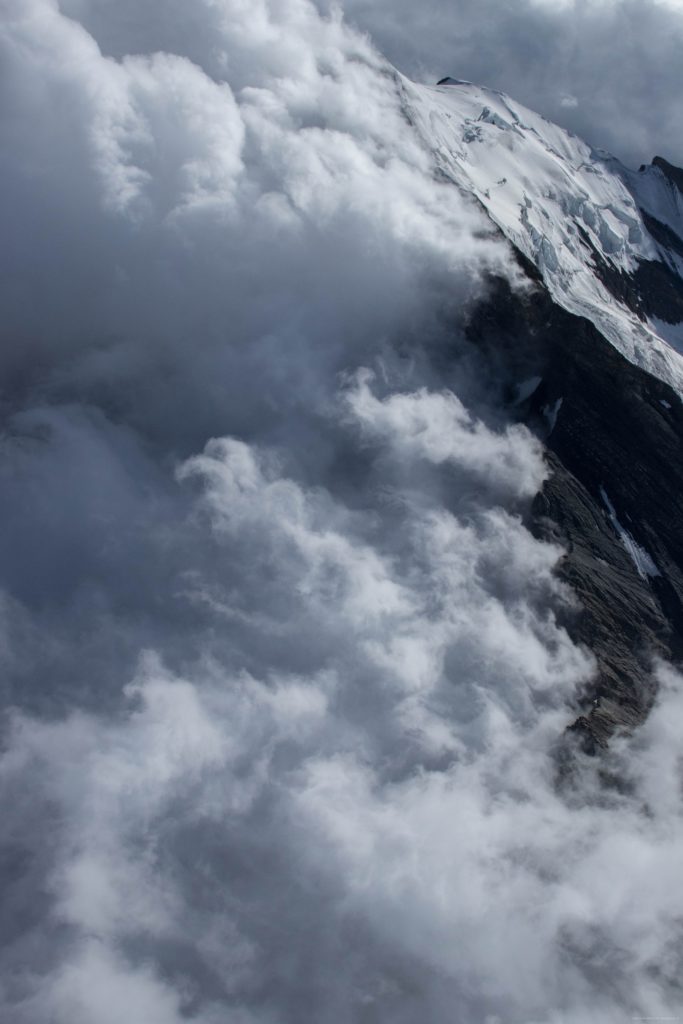 Found a hole and dropped in. I can’t shake the feeling that I am getting flipped off by the hill in the photo. 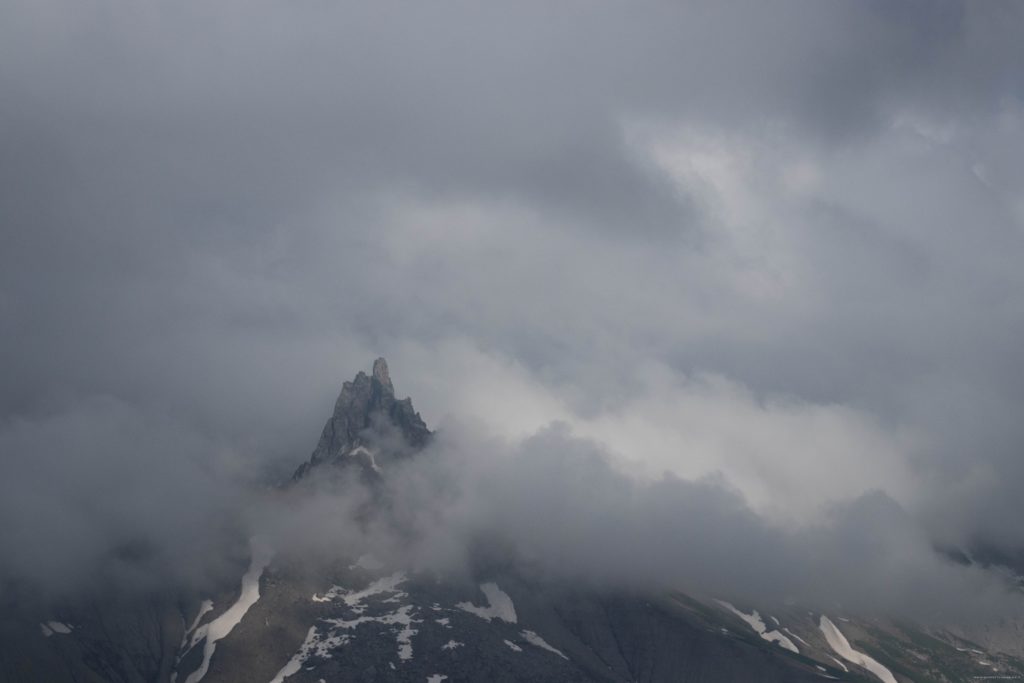 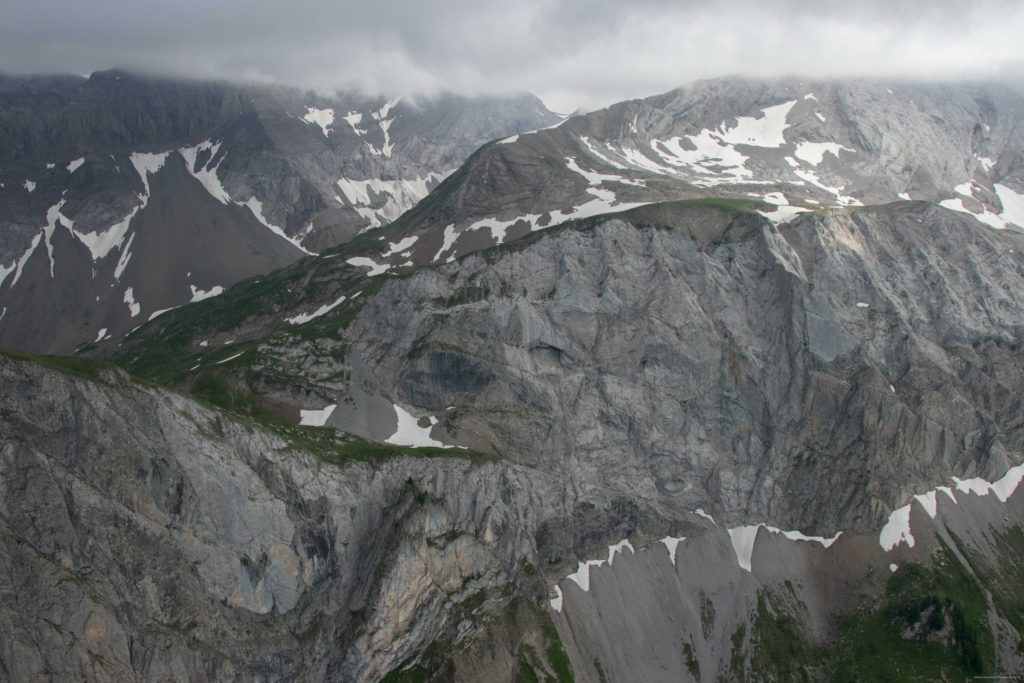 The next hill over. German is spoken where lighting is black and brooding. French is spoken on the horizon where it is sunny. Curious…. 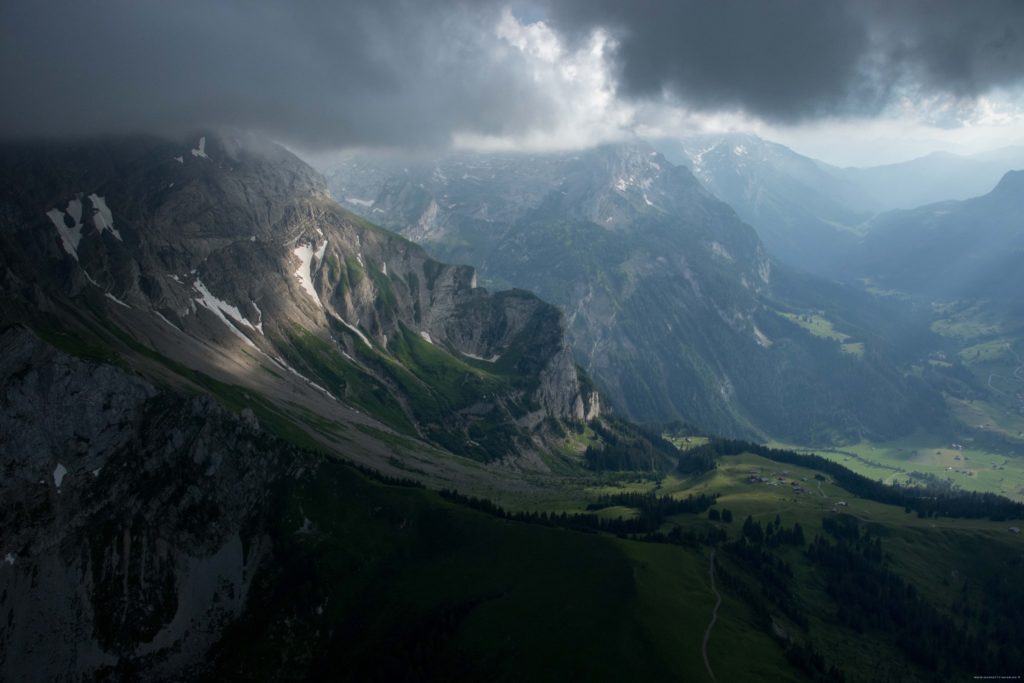 Le Rubli. Its not exactly directly above the airport, though it does hang menacingly over the pattern entry point. 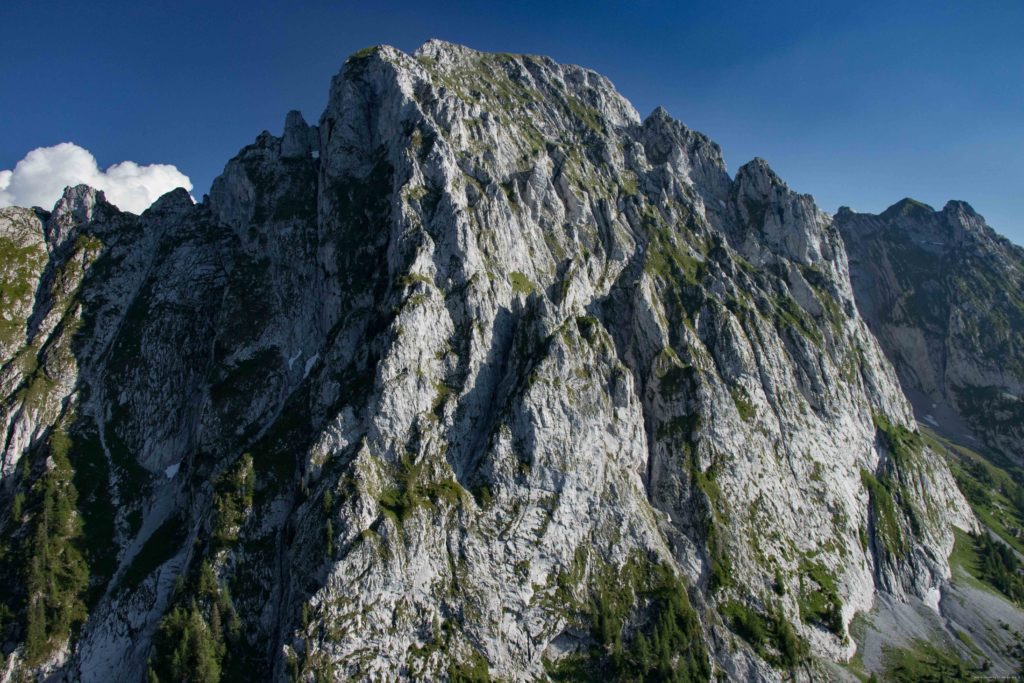 Gummfluh. This is part of the Pre-Alps/Oberland and not actually the Alps. Go figure. 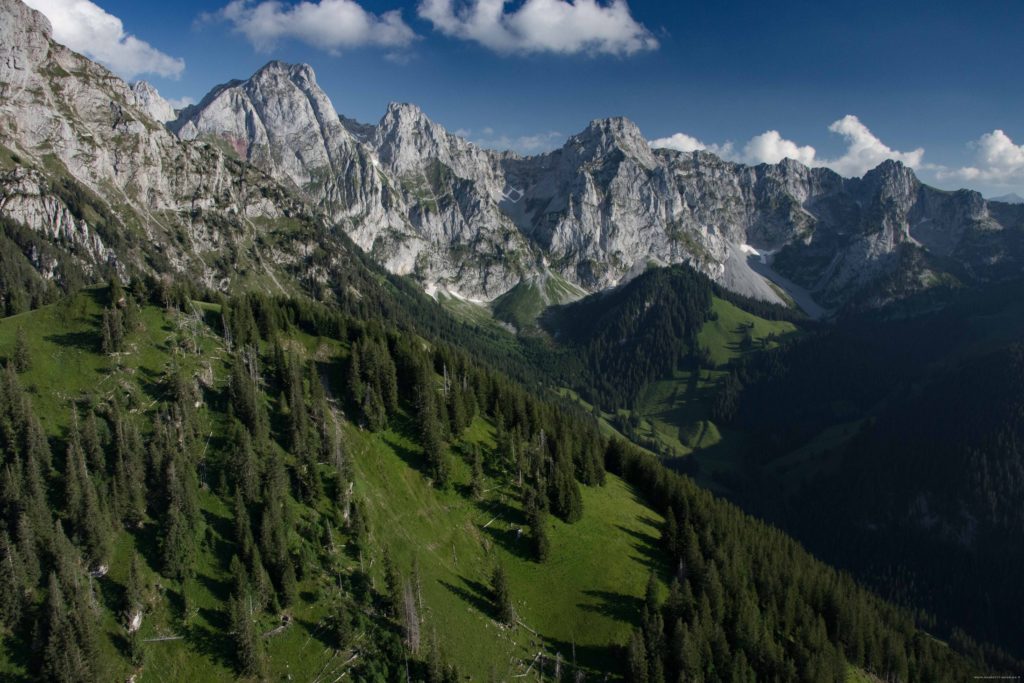 If I don’t land the thing voluntarily, it will eventually run out of fuel. 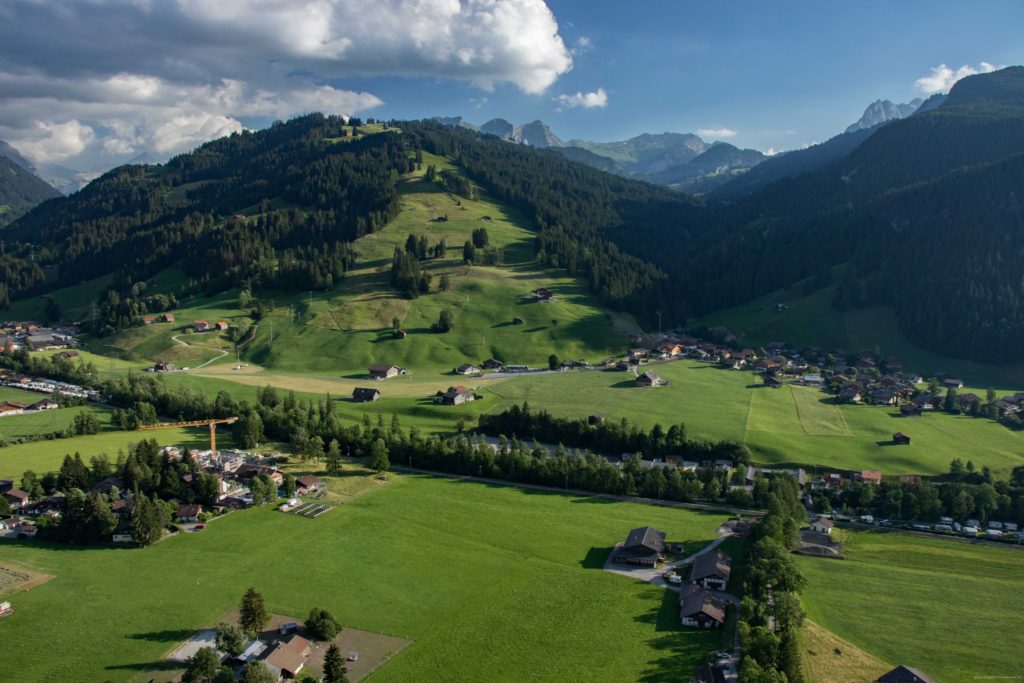