I interrupt my regular blogging procrastination to post something current. It snowed roughly down to 7,000 feet over the weekend. I dutifully raced to the airport on the first flyable day and chased it like I usually do every year.

There is something intriguing and almost spiritual about the “first snow.” In the Alps, there really is no such thing as a “first snow” as any rainstorm of consequence will leave hints of snow at 4000m/13,100’ during the course of the summer. As last year proves, an August snow can descend as low as 9,000 feet. For some reason, July and August snow, even in the high Rockies and Pyrenees, while it can happen, just doesn’t count as the “first” snow, the harbinger of coming winter; rather, it’s a delightful anomaly endemic to high mountain existence.

I have begun filming some of my flights, including this one. The process began years ago and was a complete pain in the rear. A spinning propeller is not received well on digital recordings. Airframe vibration turns the whole thing into literal jello on camera, as CMOS sensor recording order mixed with getting wiggled produces deleterious effects. Someone suggested I get recordings in the event a film is done some day, which while I understood the reasoning, I was sardonically skeptical. I had to admit, though, that I am in the air in quite rugged and unusual places. What harm could it do to have some good quality film? It may be that years from now I’ll wonder why I didn’t bother to record some.

That set off an eleven-month saga of “rage against the machine” at my new and expensive camera…and mounts….and accessories…and more accessories…and software. I have to admit the product is special, though I have been greeted in the online world with counsel that I could shorten them accommodate limited attention spans and pay for additional cinematic effects and add-ons. I am unsure of the point, as they are free videos, and I believe the best I could get here is some sort of electronic badge from YouTube to increase my self-esteem. Never mind, I’d rather go flying.

Video first, then photos. Not sure how this will translate in e-mail blasts. 16 minutes HD.

Gummfluh. A little bit of snow on the right, and contrails from Swiss military jets above. 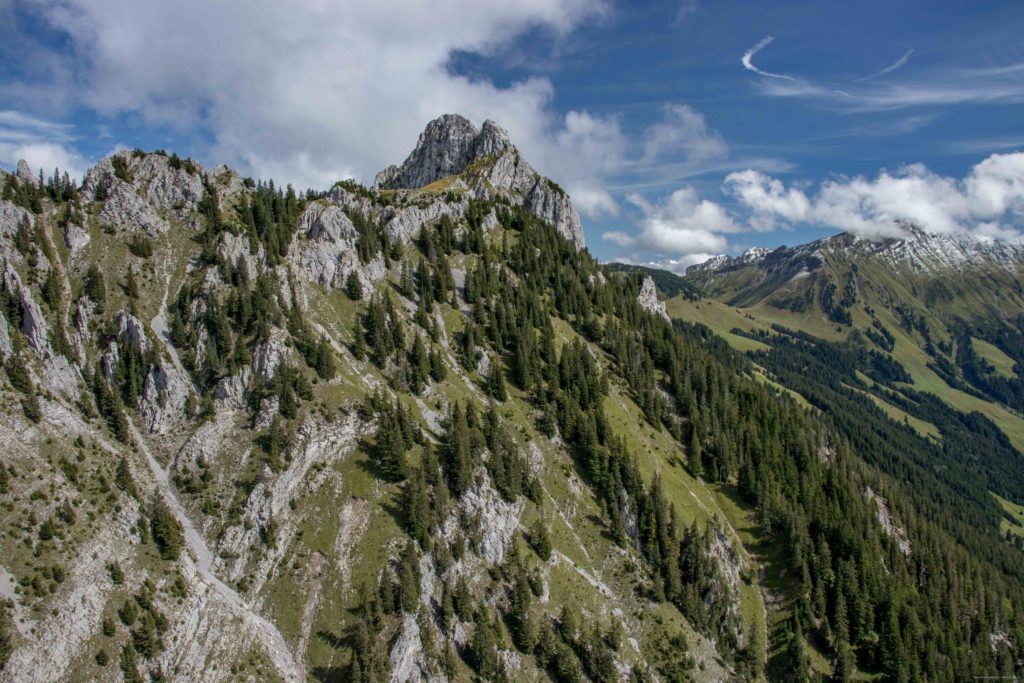 Col de Jable, with Alps leering over the ridge. 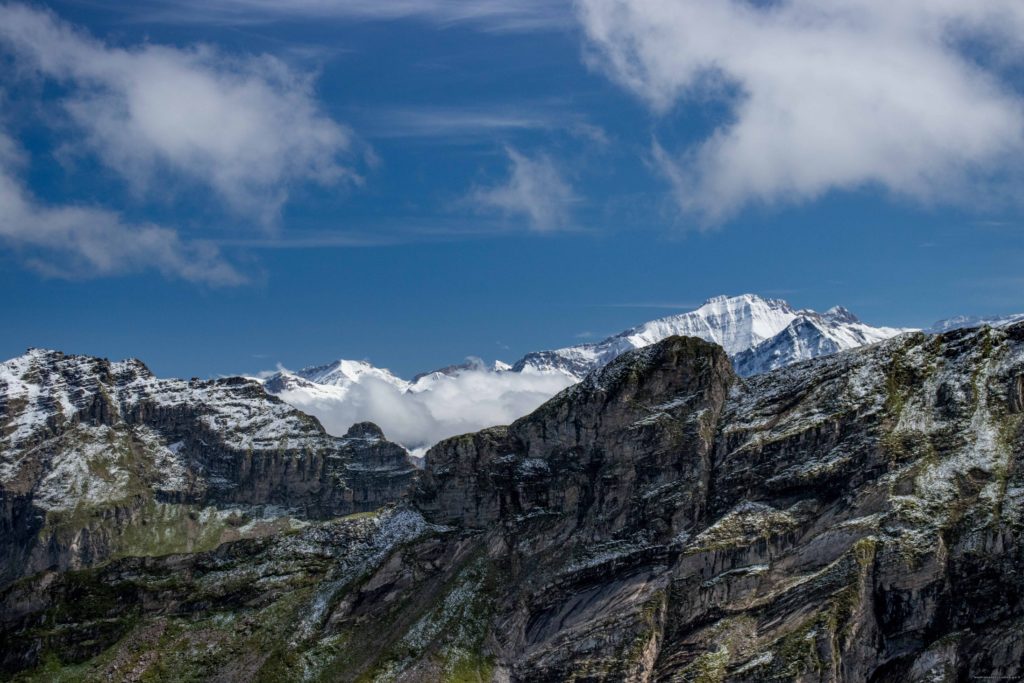 Slopes of the Wittenberghorn, a neat mixture of green grass and snow. 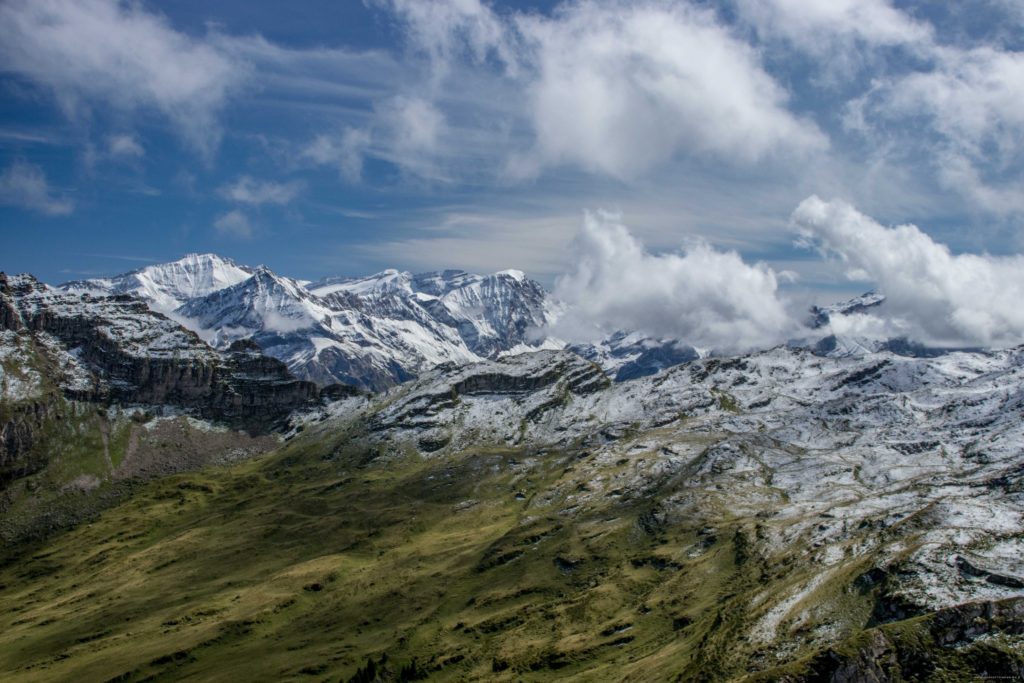 Above the clouds, looking toward Lenk and Turbach. 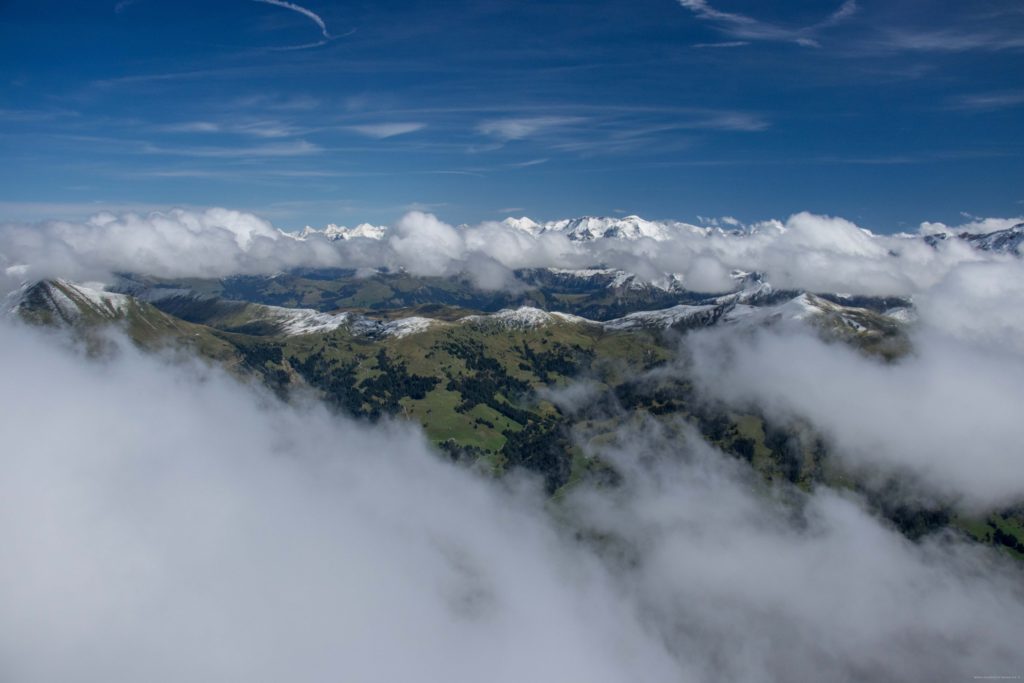 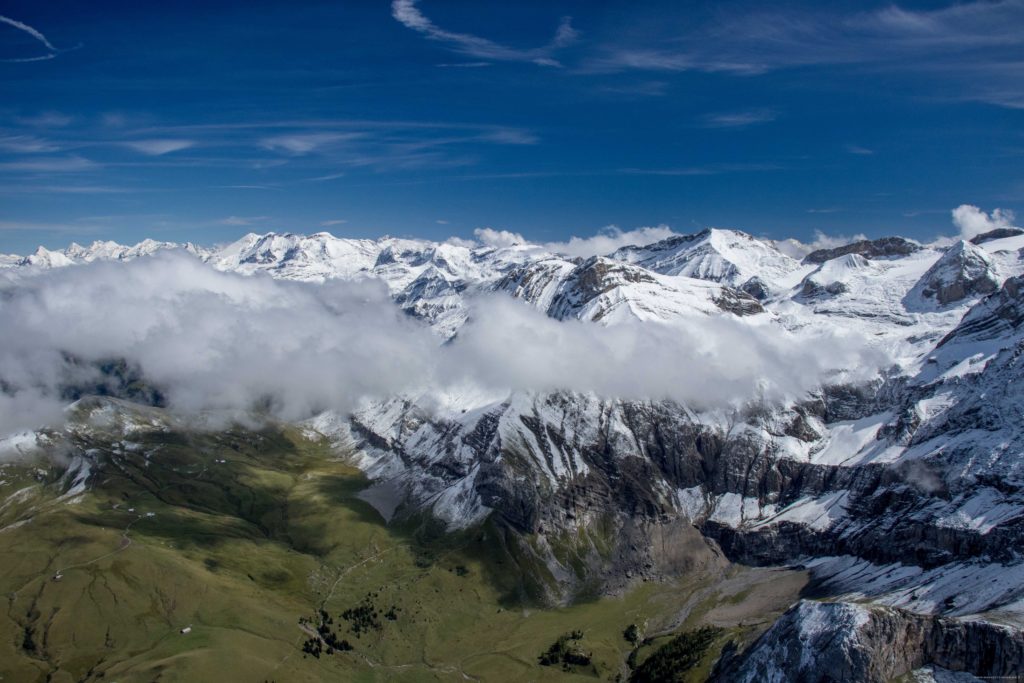 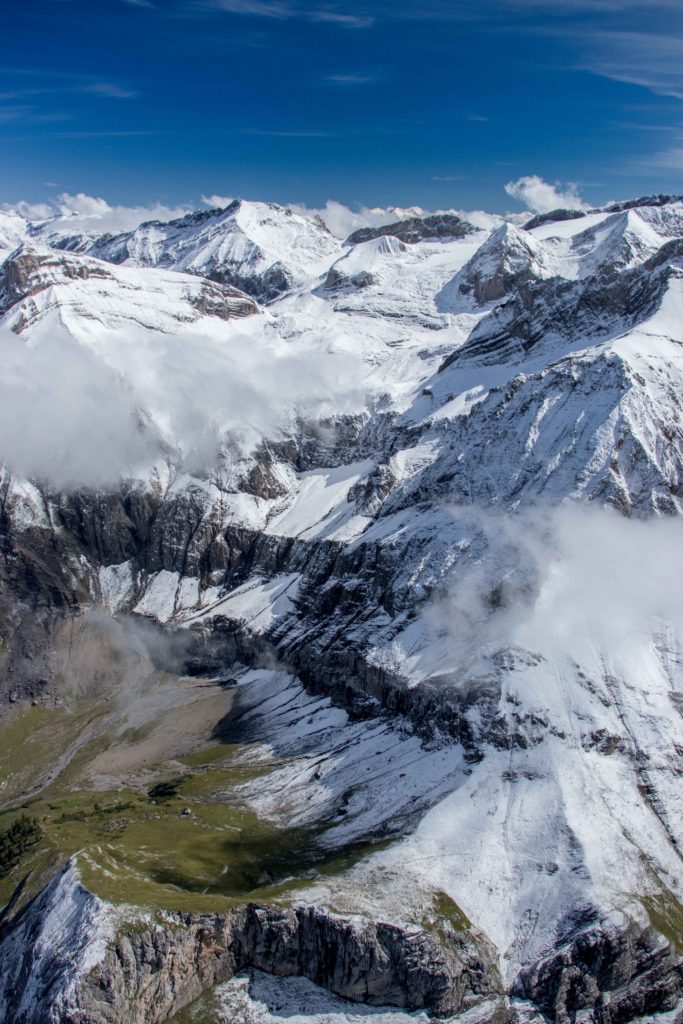 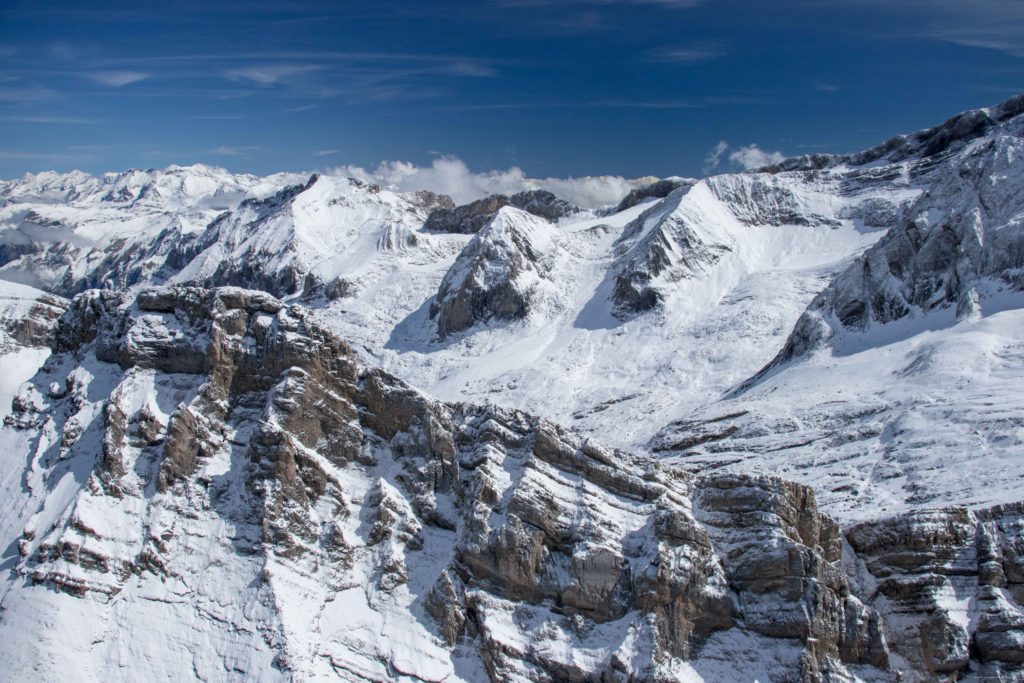 Geltengletscher (the parts that are white and smooth). This is why glacier photography is done mostly in summer, to distinguish permanent ice fixtures from snowflakes. 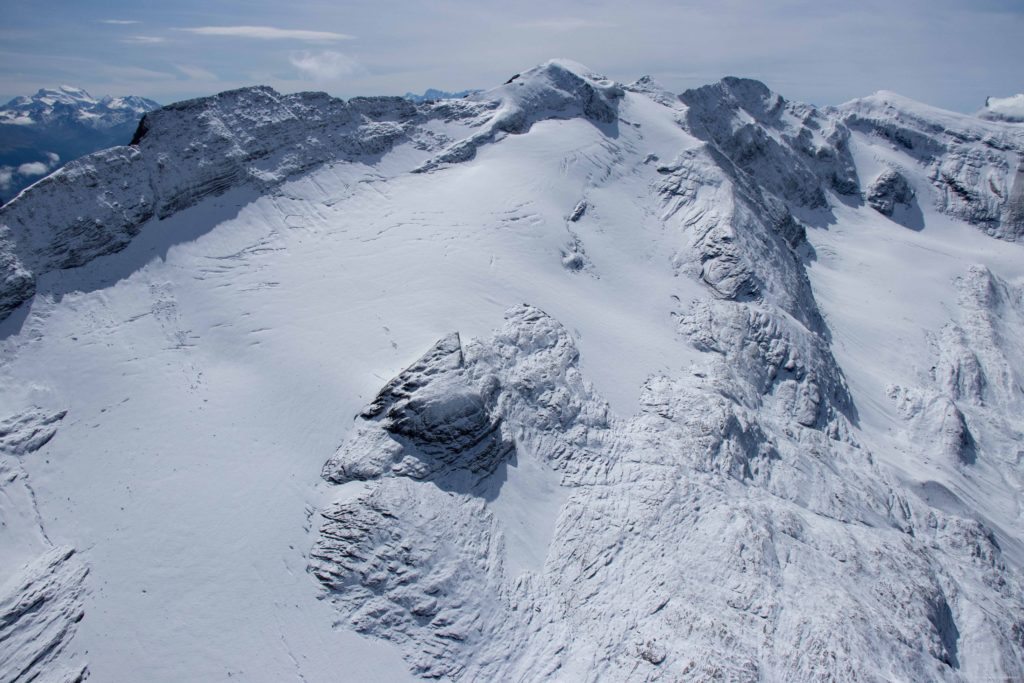 South of Sion, in the Valais. Snow levels are higher here. 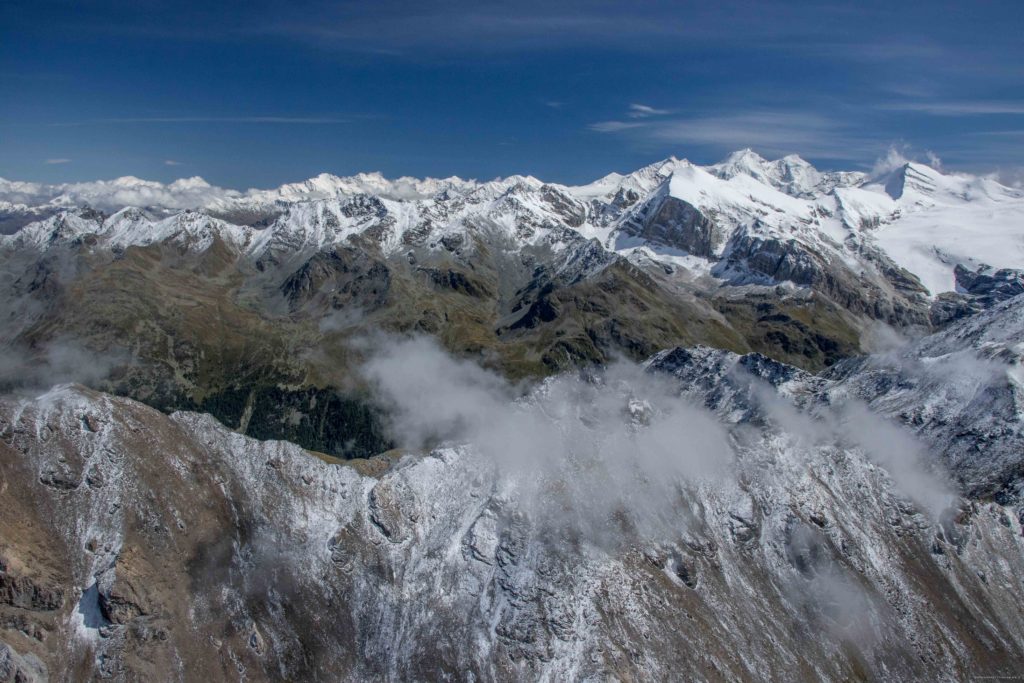 Large wall of rock with snow stuck on it. Beneath the Weisshorn. 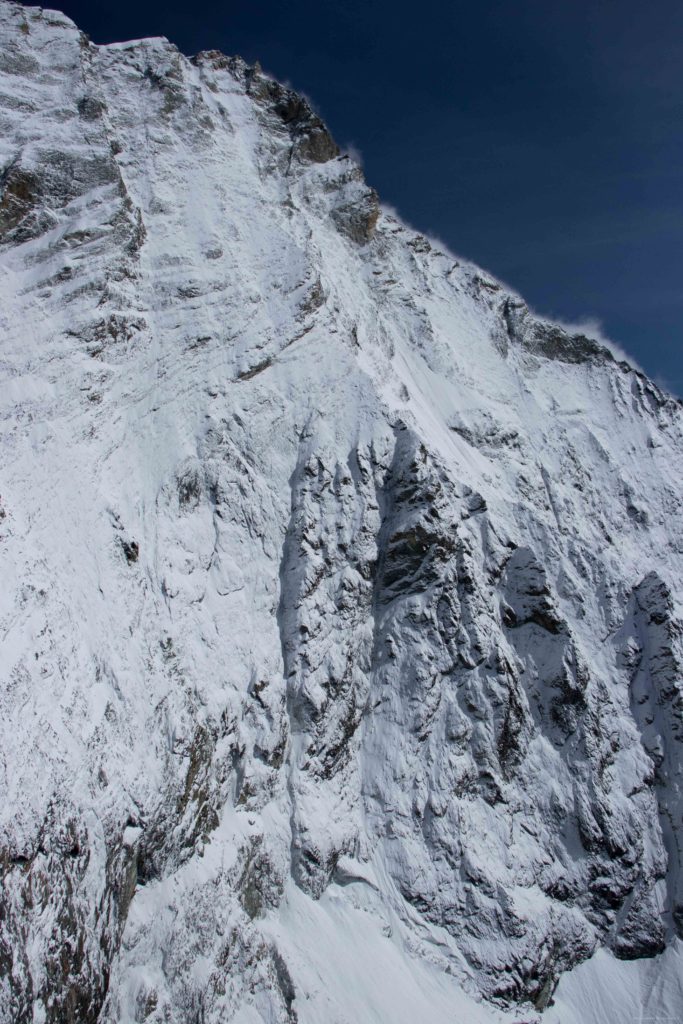 Between Zinalrothorn and Obel Gaberhorn, with Dufourspitze on the horizon. Another lesson in why glaciers lack certain intrigue with snow on them. Kind of ironic, actually. 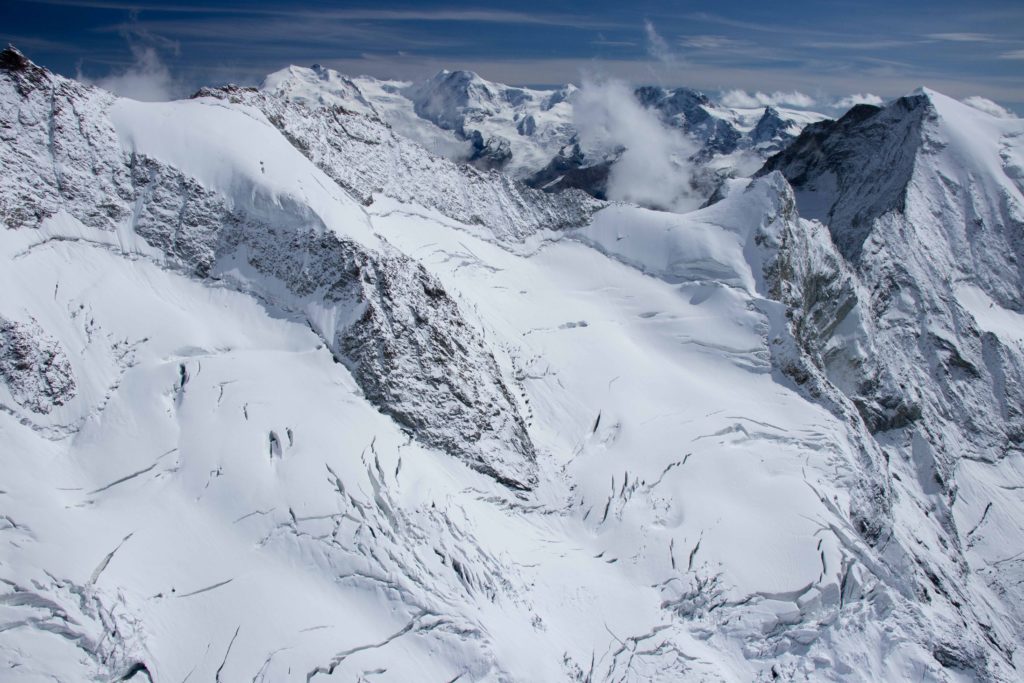 Matterhorn. It was too windy to fly around it, so I stayed on the upwind side and got bumped around. 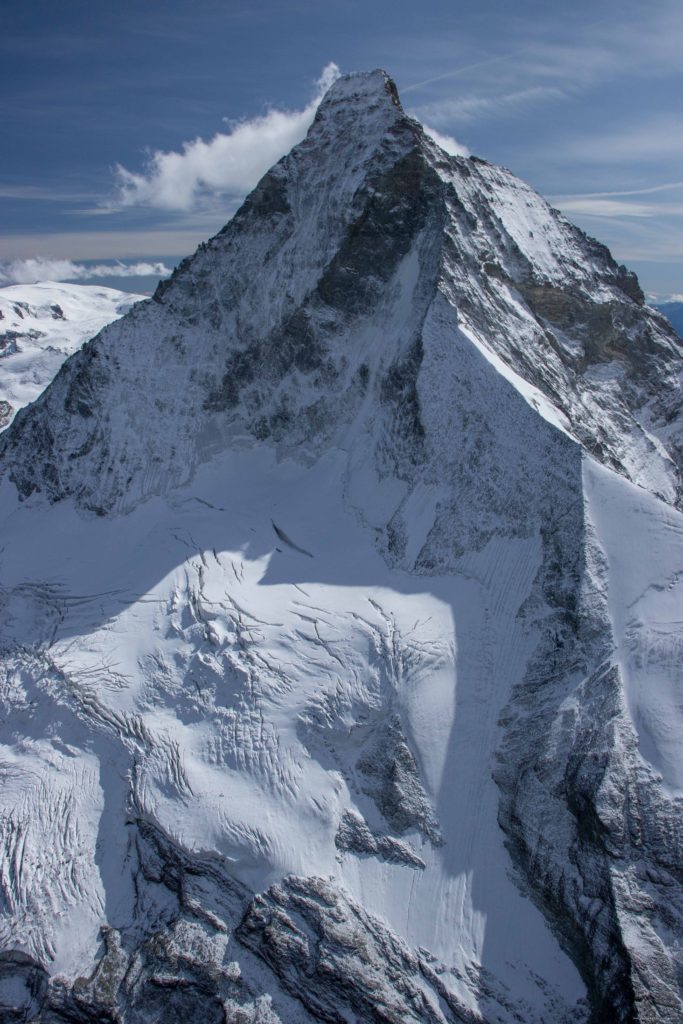 West slope of the Matterhorn, looking over the ridge into Italy. I crossed over and got tossed around, so I came back. 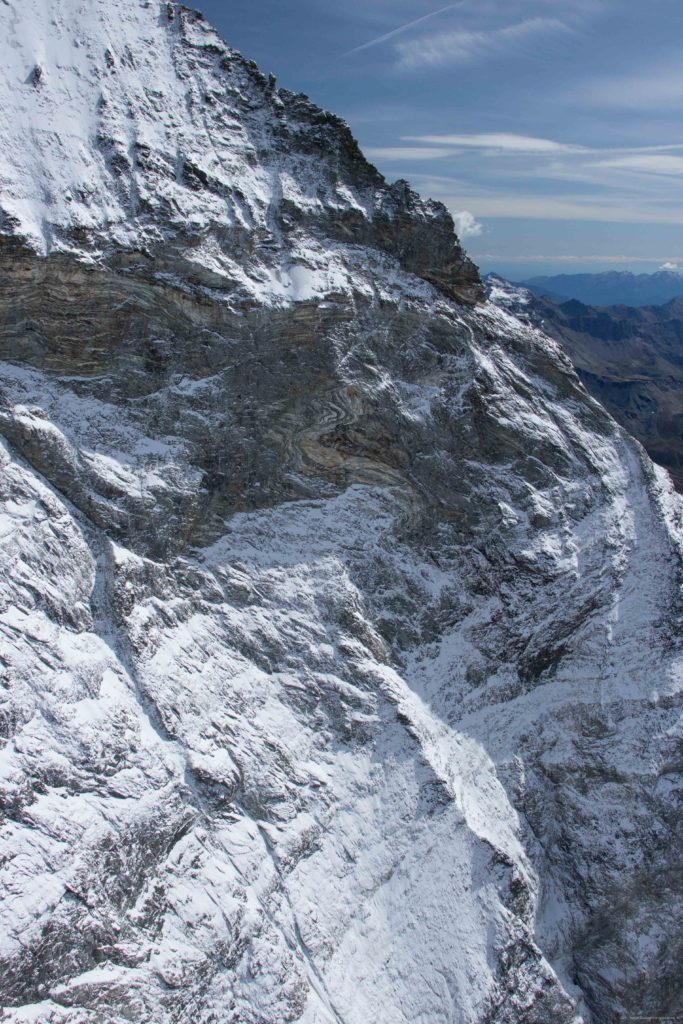 More rock with snow on it. “Seen one, seen them all” so I have heard. 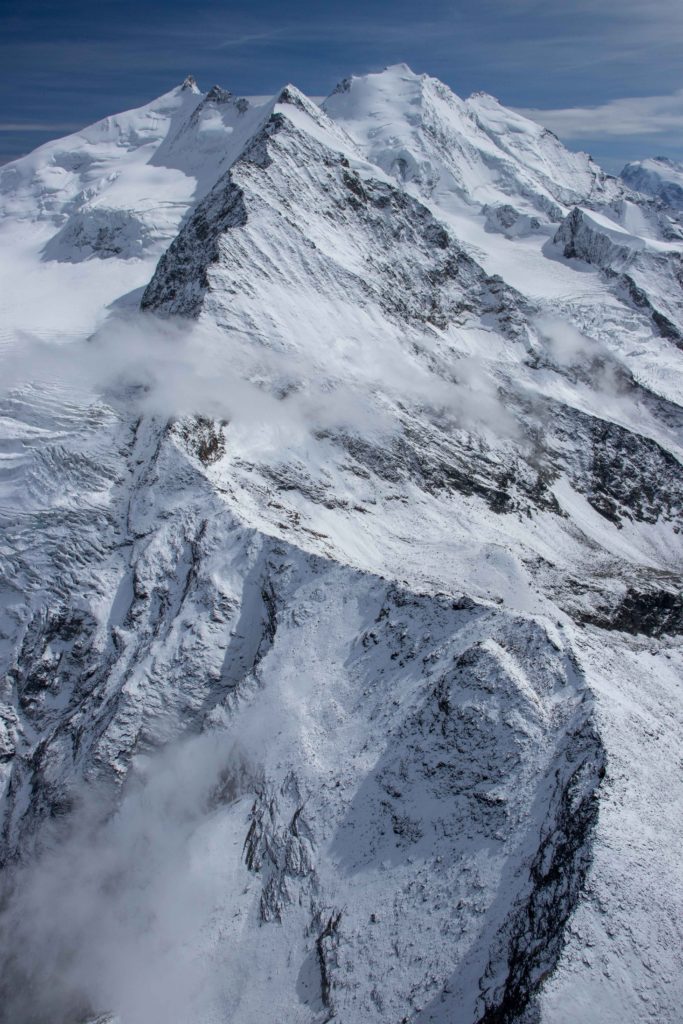 Weissmiess in the distance. A nice demonstration of snow levels as they melt upward during the day. 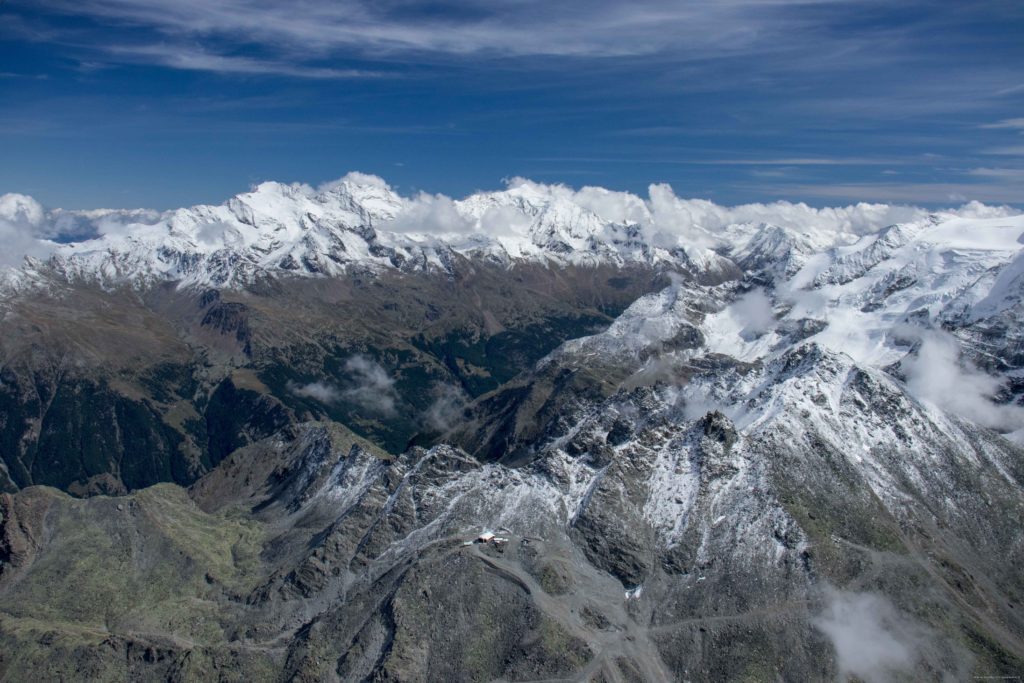 Back to the Bernese Alps, south side, with snow melting. It is not likely to last all the way to winter, as September sun is too strong. 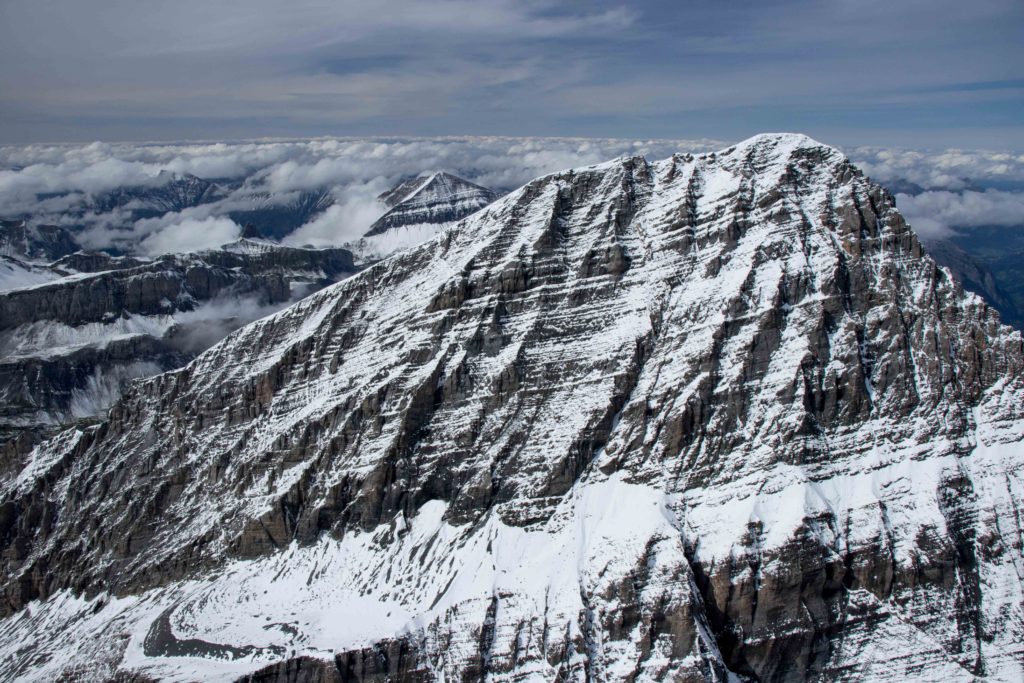 One thing I love about first snows is that mountain textures are extremely vivid. As winter progresses, these textures will be coated with meters of snow and lose detail of their texture. That can have its own beauty when it happens. 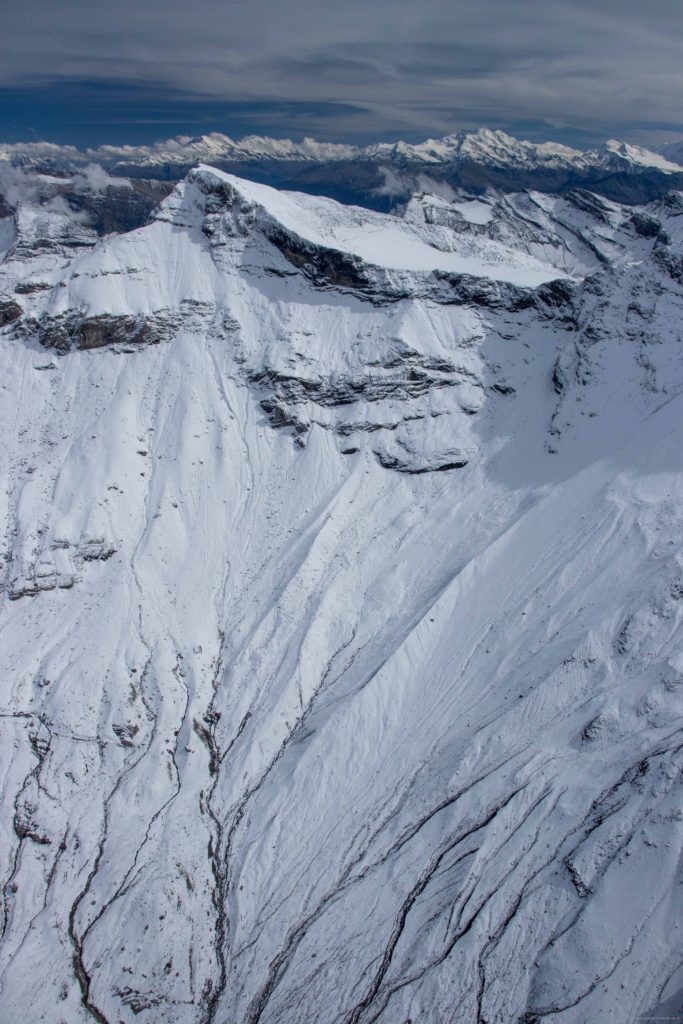 Case in point regarding texture. On the top of the image is the tongue of the Plaines Morte Glacier. Just 10 days prior, there was a roaring waterfall here, now shut off due to no glacier melt. 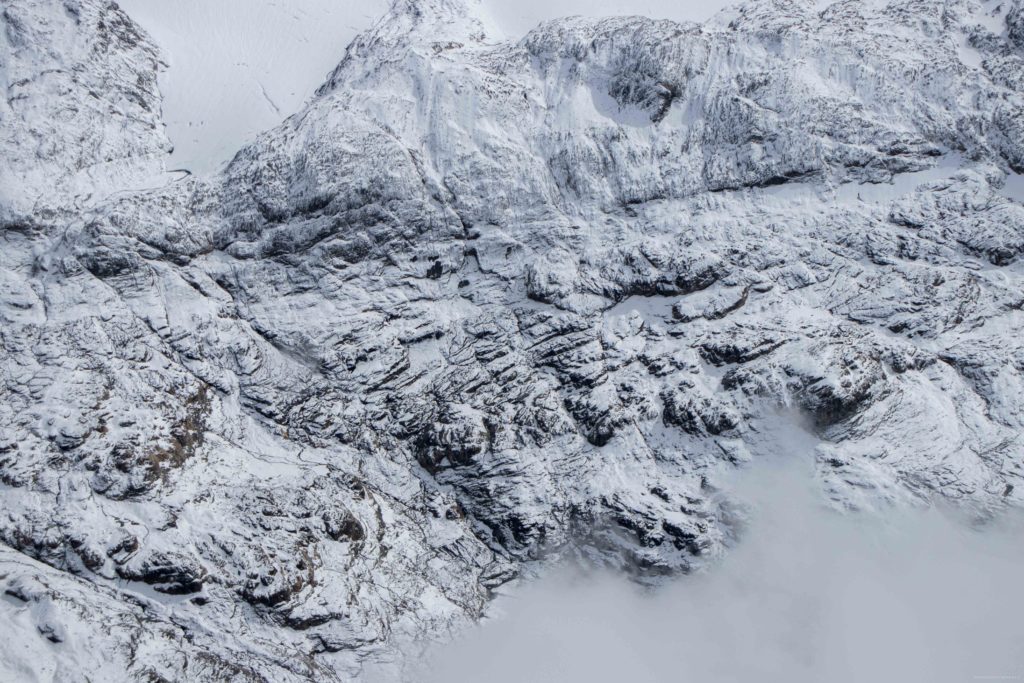 I flew to some of the highest peaks in the rear earlier in the flight. By now, I am absolutely freezing. 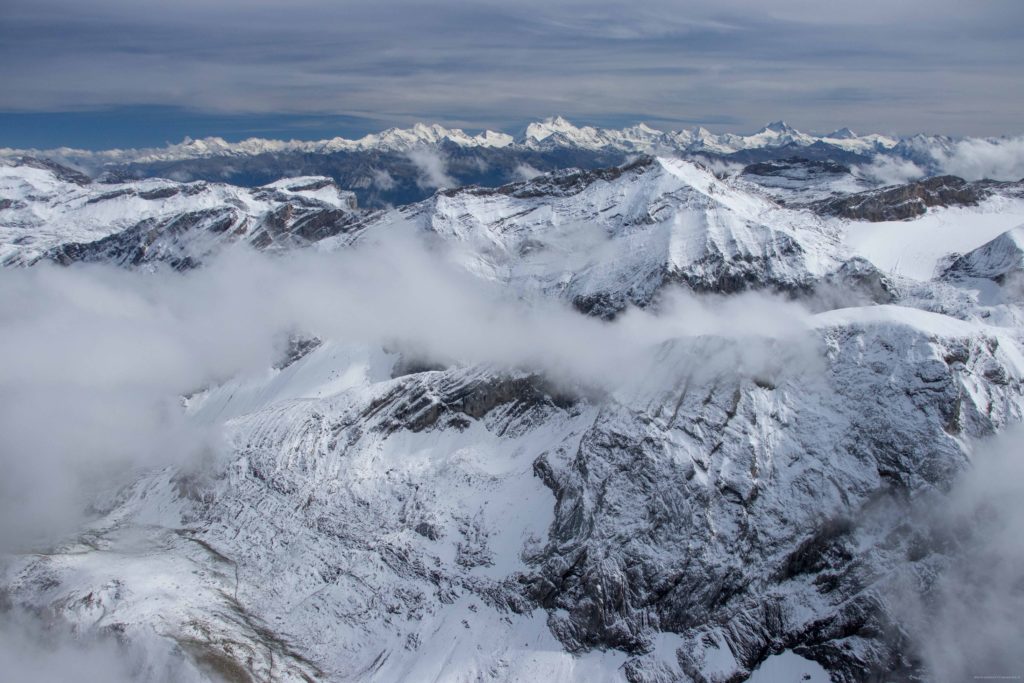 A waterfall with snow! Hallelujah! 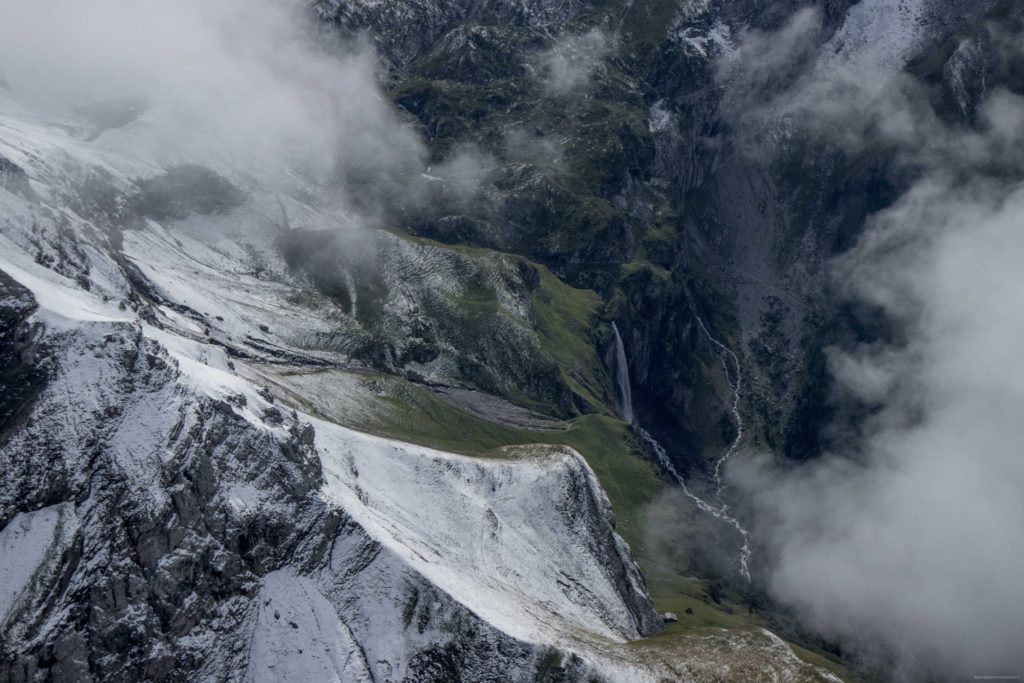 In early snowfalls, rivers and streams show up as dark. Once they freeze, the texture is lost. 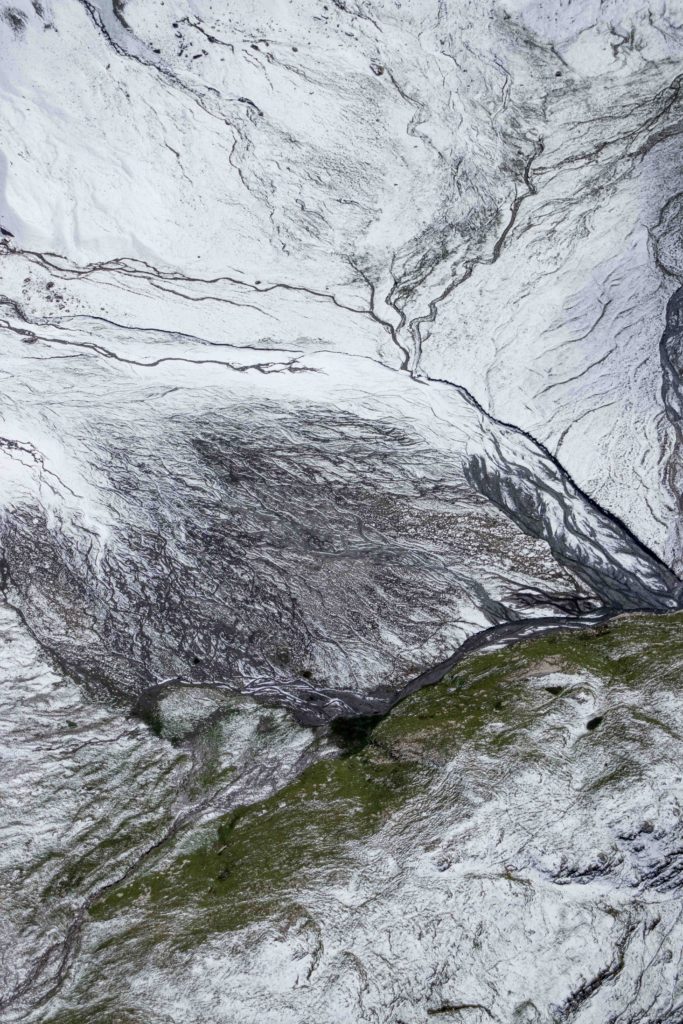 Below the clouds, in carb ice territory. 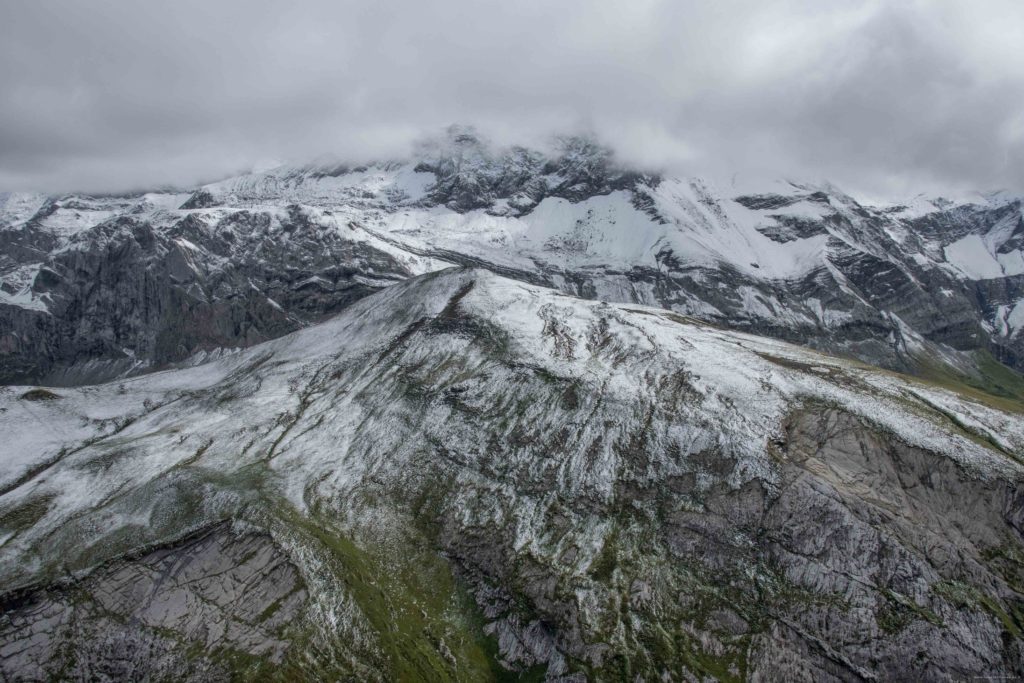