Greetings from New Seattle (Alpine, WY)! We are caught in an anomalous weather pattern, resulting in nearly nonstop overcast and intermittent rain, practically for weeks. I had a window last week to go up, so I dropped everything and went while the sun was out.

I really, really wanted to get up to Yellowstone, though the forecast was for 40% chance of thunderstorms later in the day, with small hail being a risk. Something didn’t feel right, as Yellowstone is really, really big with basically nowhere to land, surrounded by mountains. Getting trapped in there with weather would be deadly. Instead, I decided to hit up the greater Jackson Hole area, including a swipe at Grand Teton. Spring has finally shown up, so it was time to capture it before summer comes and changes it all again. The route of flight was the Snake River Canyon, Hoback River Canyon, up over the Snake River at the bottom of the valley, then over Jackson proper, the Elk Preserve, the border of the Gros Ventre Wilderness, up to Grand Teton, Jackson Lake (border of Yellowstone and Grand Teton National Park), back to Grand Teton, then over the Snake River Range home.

I purchased a new lens. My mainstay has been in service since 2009, before getting involved with taking pictures from the air. It has been having problems, so before I sent it off for service, I got another lens. Instead of 18mm to 200mm, I purchased a 10mm to 18mm lens, which allows super wide-angle photos. It is also a very crisp lens, and you can see that in the photos. They have a superior light balance and a crisper contrast. Contrary to popular belief, it is not the camera that matters so much, it’s the lens. I am limited to a maximum of 14mm to 15mm wide angle, as anything wider gets the airframe on both sides. Even still, the results are very pleasant.

My fears about thunderstorms were accurate. As I flew about 70% of the fuel tank down, I turned around at the Tetons to go home. There was a wall of black hiding behind the Snake River Range. Fiddlesticks. I refreshed radar on the iPad, and the thunderstorms were basically coming over the airport in Alpine and heading toward where I was. Based on cell trend, it was a close decision, and I opted to head west toward Idaho, cross the Snake River Range in a tight canyon/pass, and circle over the lake until the storm moved. The plan worked, and I landed in a light rain shower, in the sun, with a mere 4mph wind after the storm passed. I had a handheld radio in the cockpit for the first time ever (that would be since 1996 with this airplane!) and it was relieving to hear automated weather observations and to have Jackson Hole Airport as a backup, as it has a tower requiring radio communications. While it damages my brand as a backward rogue individualist pilot, I will shortly be getting a proper radio installation, which is a safety and convenience feature and I must say, I am looking forward to it. 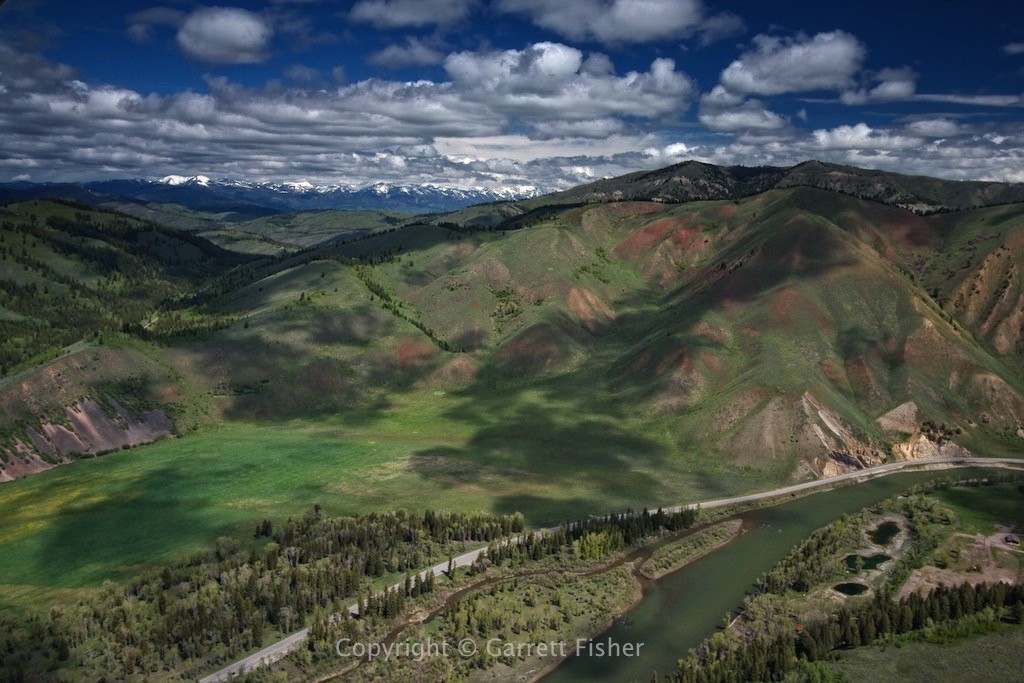 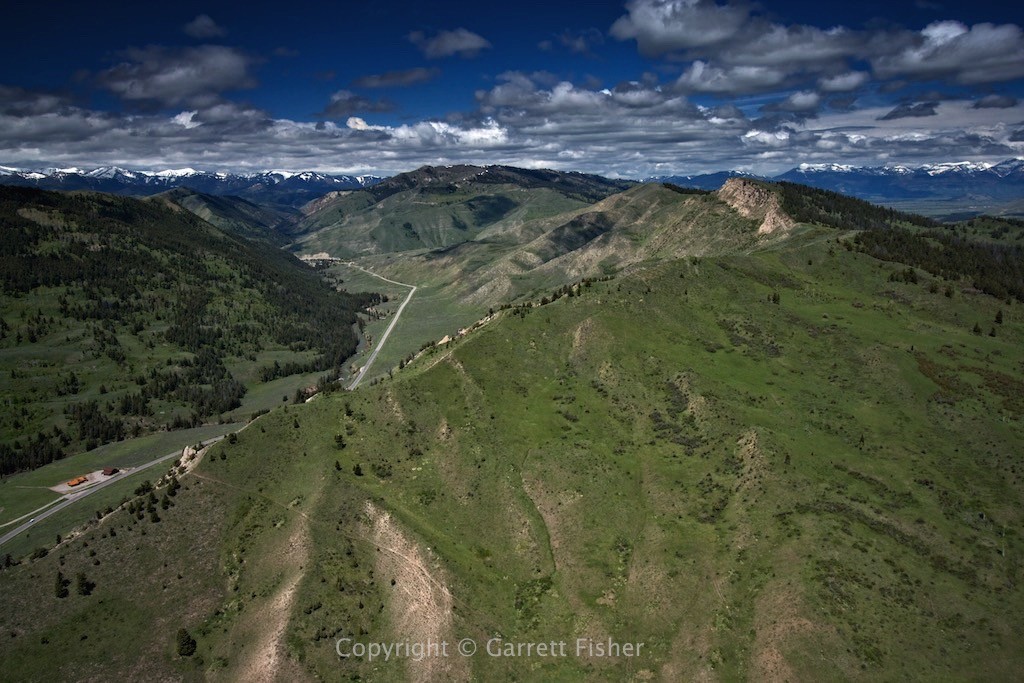 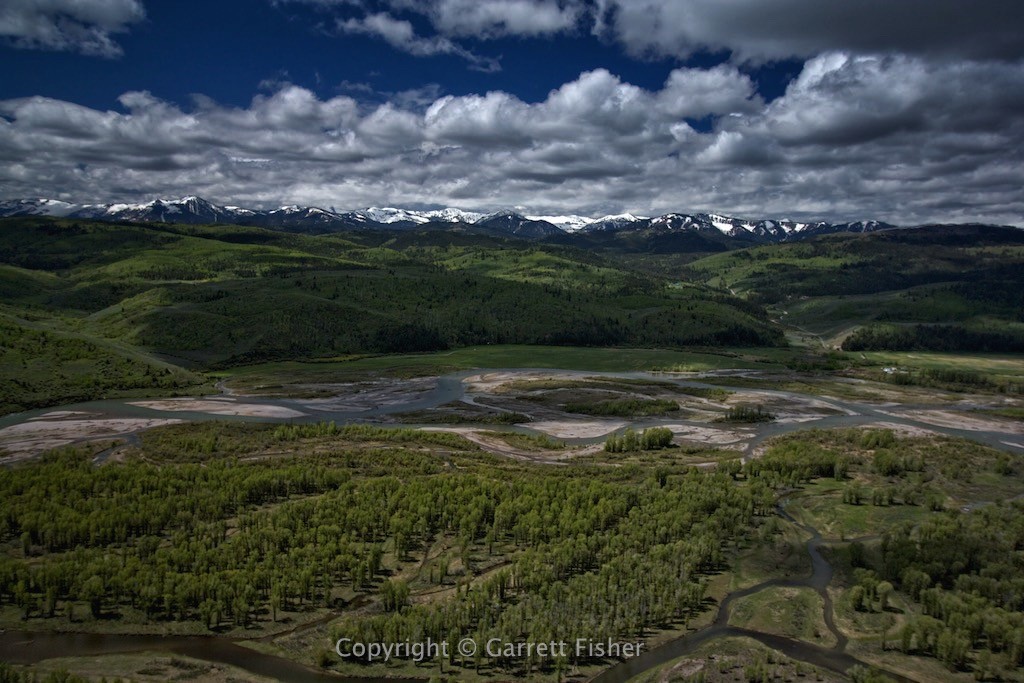 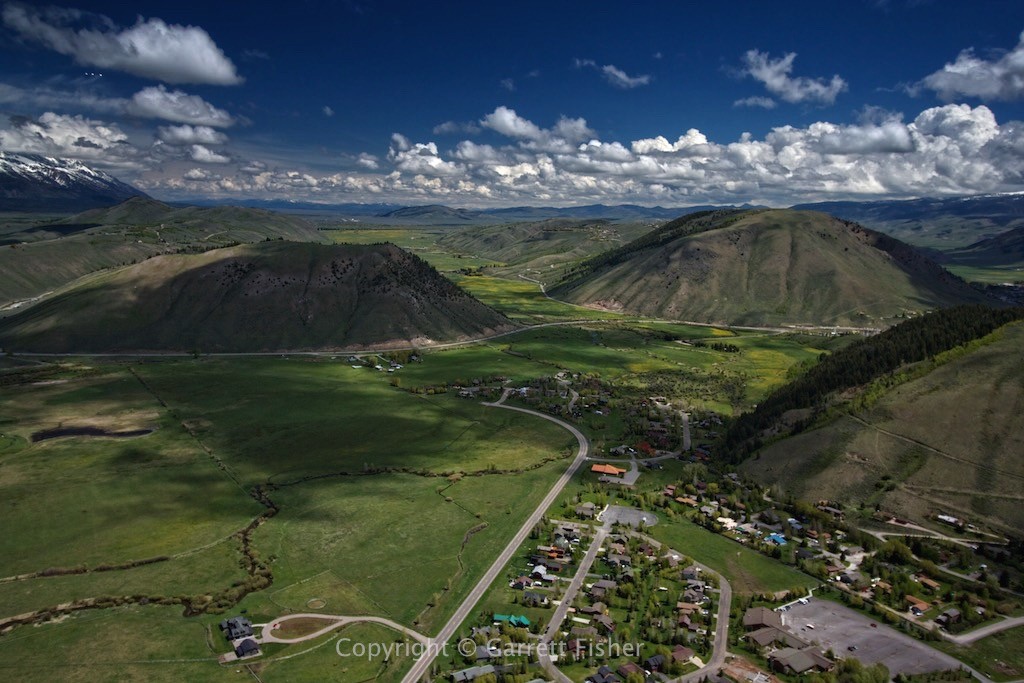 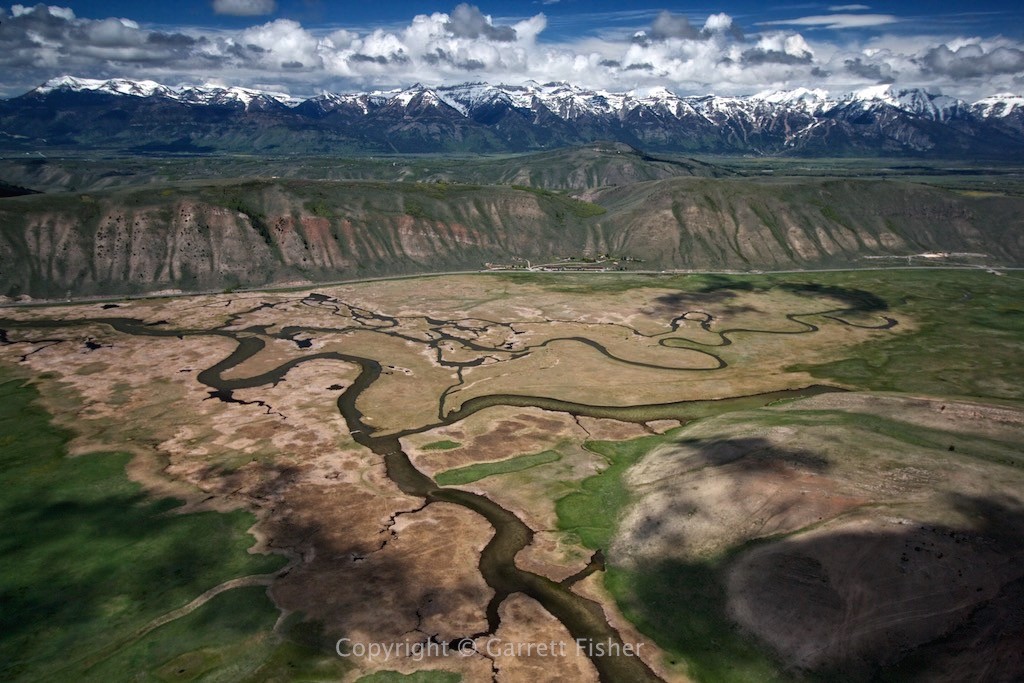 Elk Preserve at the border of the Gros Ventre Wilderness 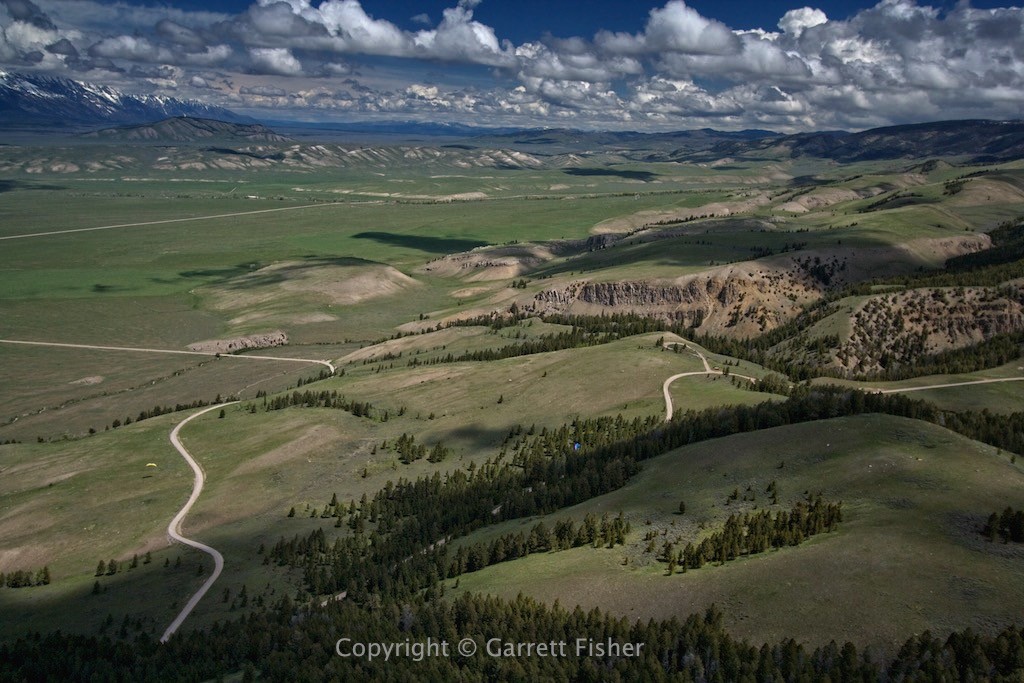 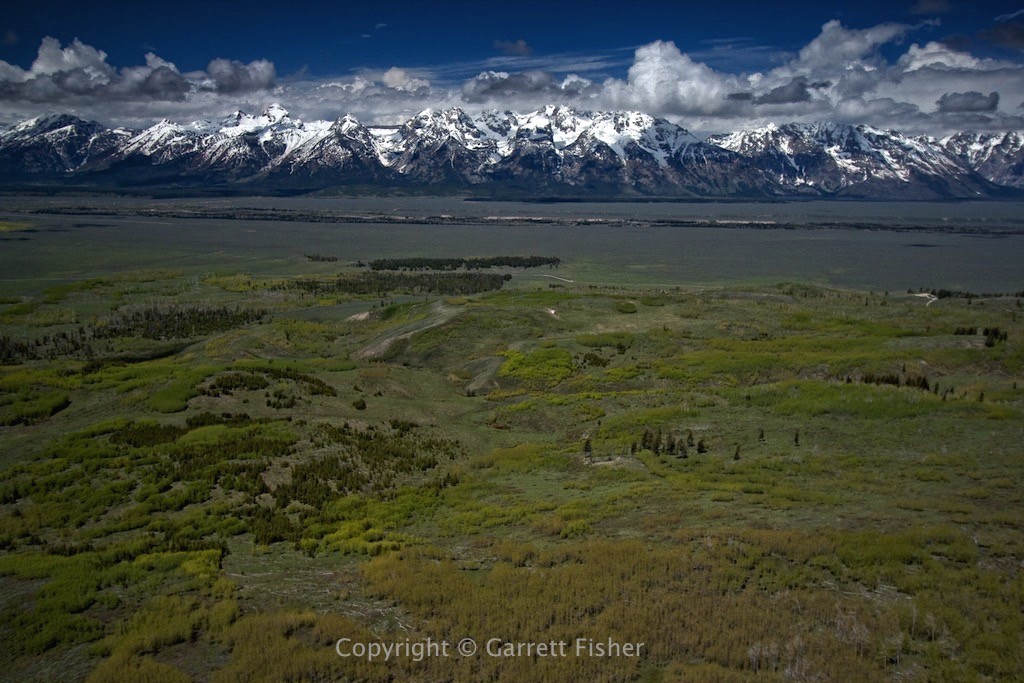 Grand Teton – Sagebrush in the flatlands 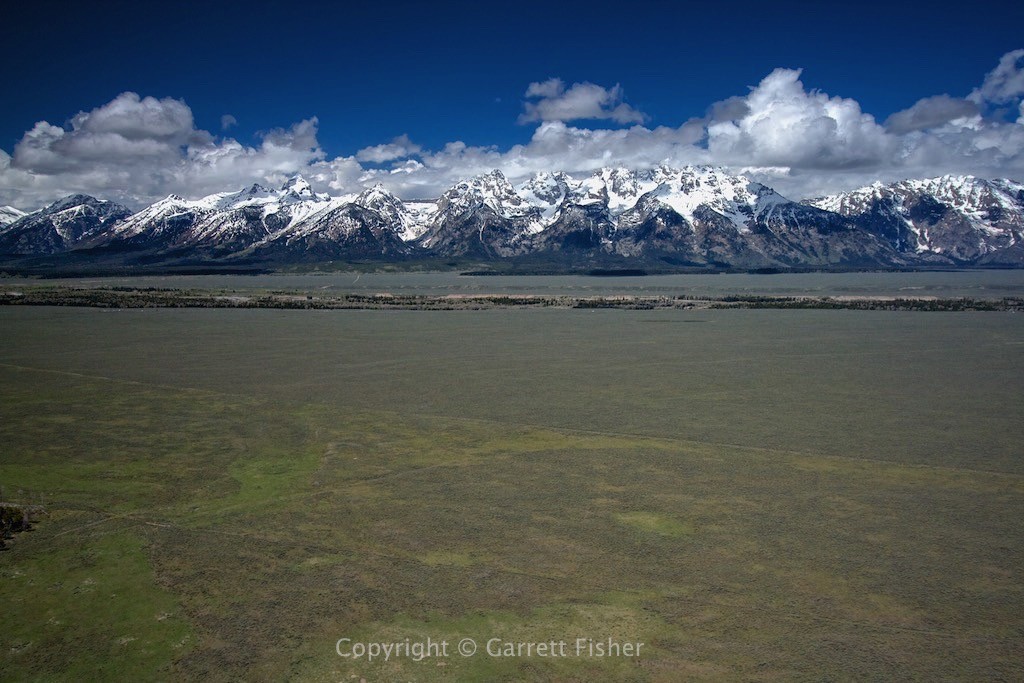 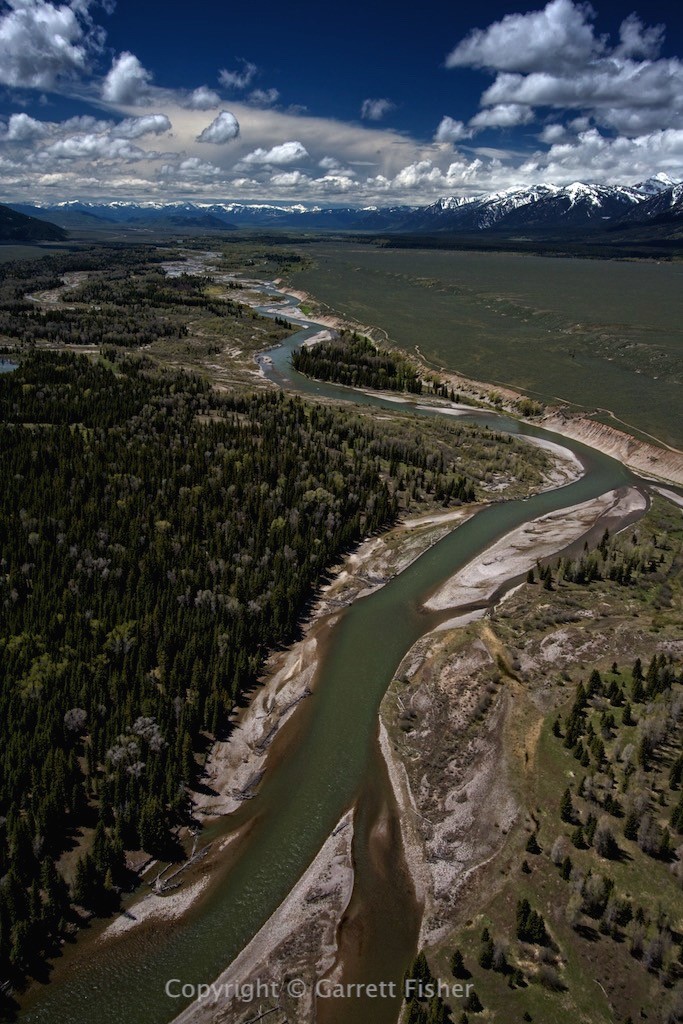 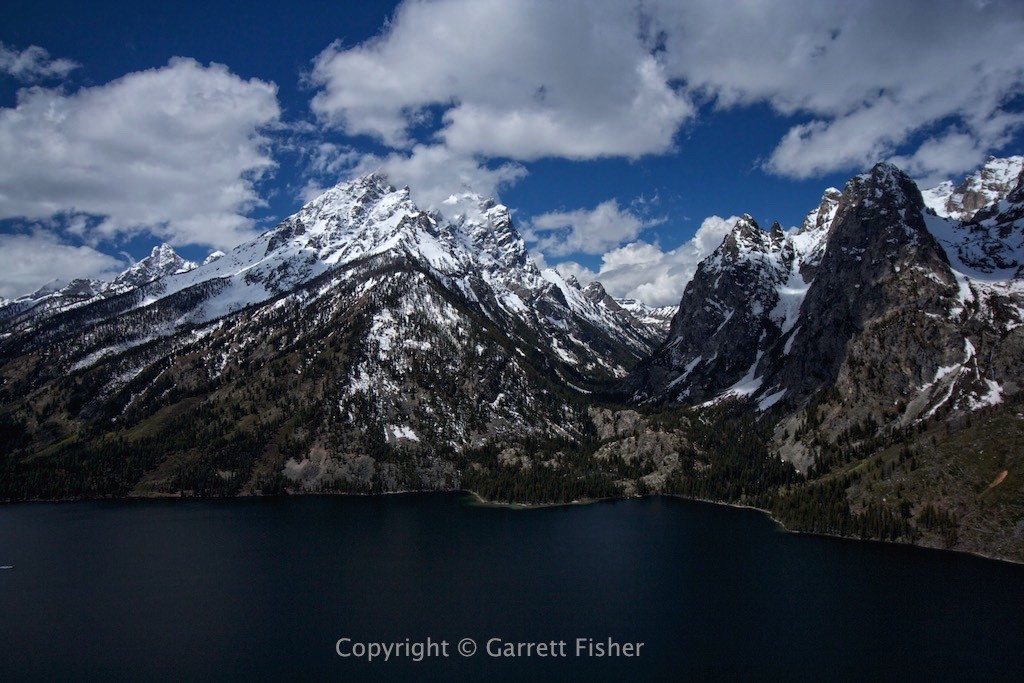 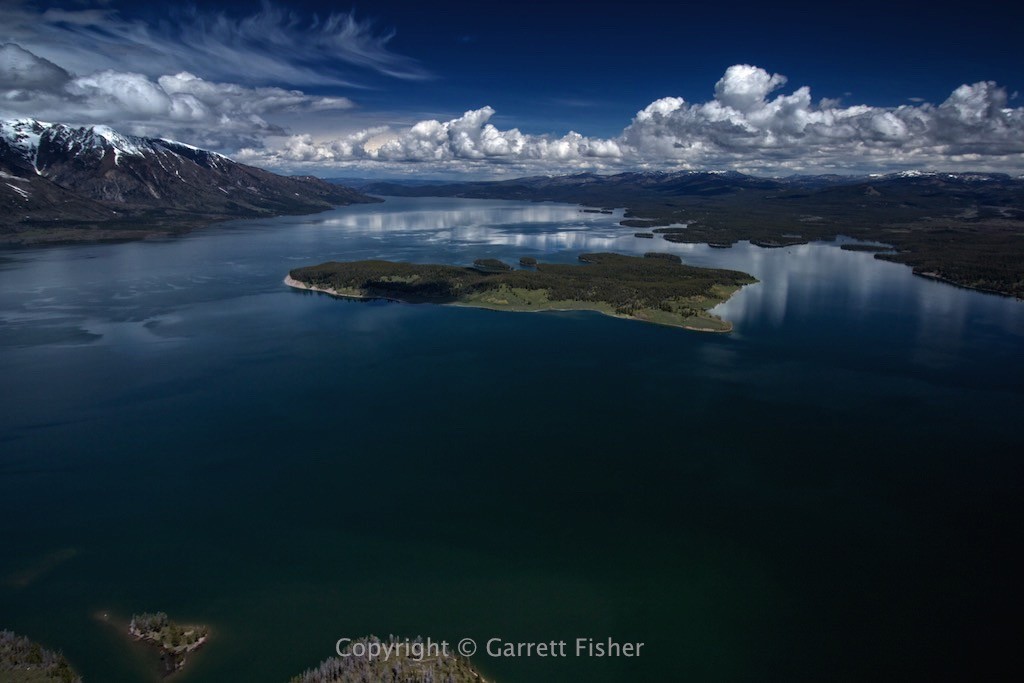 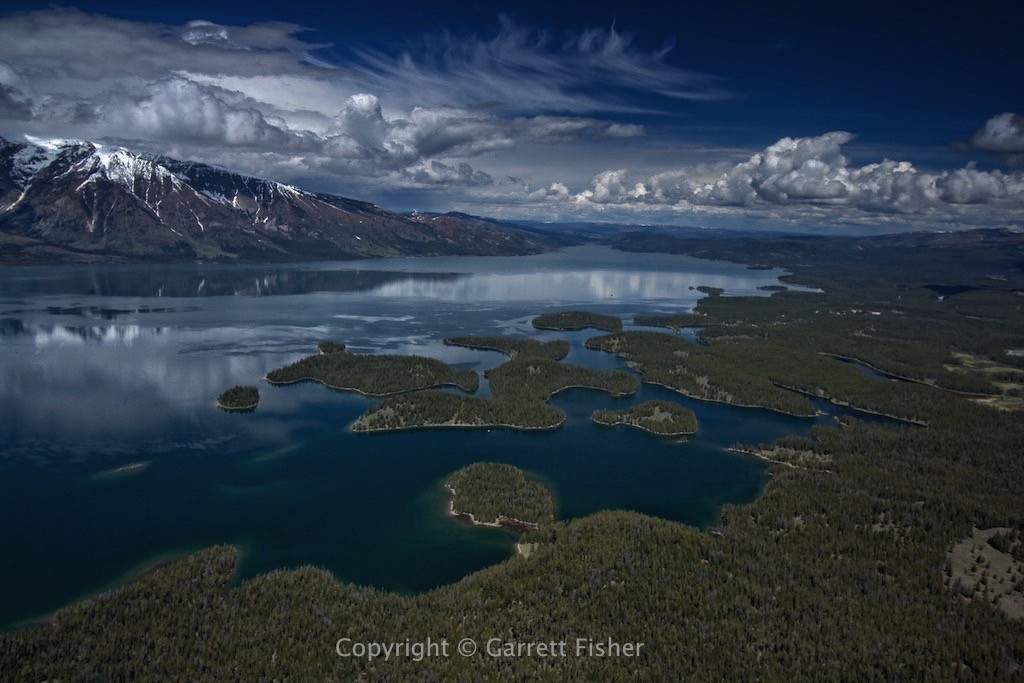 Jackson Lake, with Tetons in the Background (looking W) 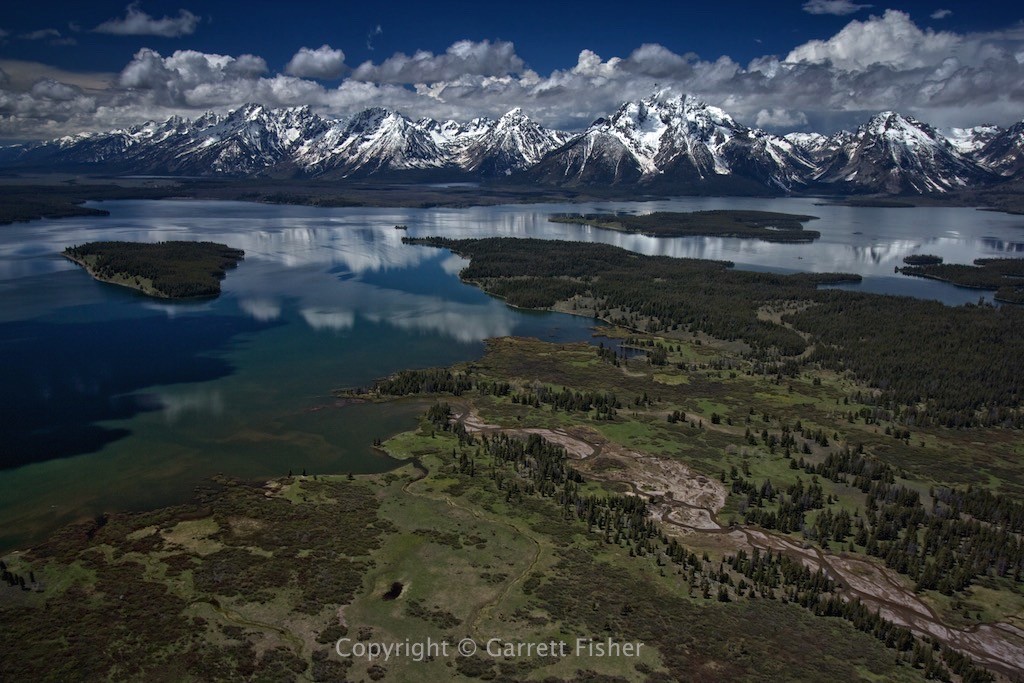 The Tetons, Hiding in the clouds 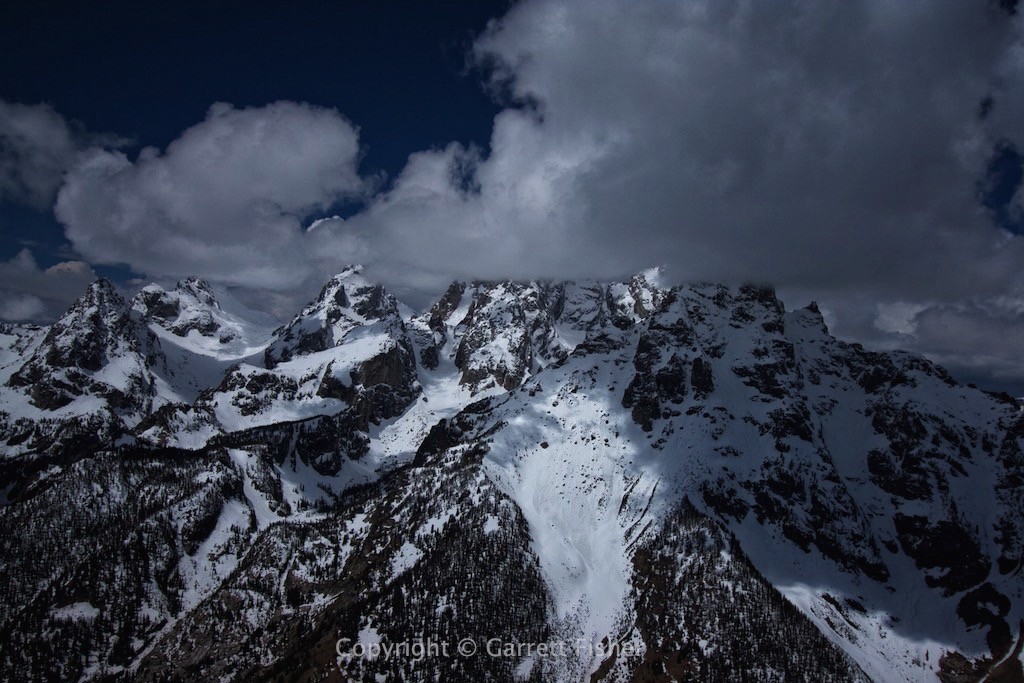 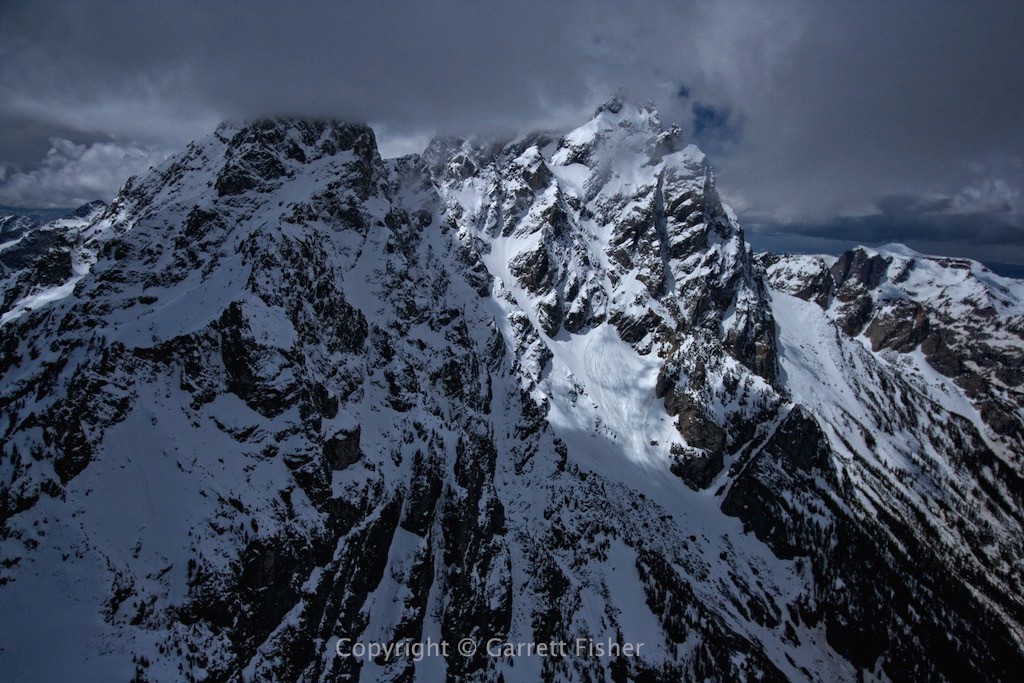 Looking down from Teton Range toward Jackson Lake 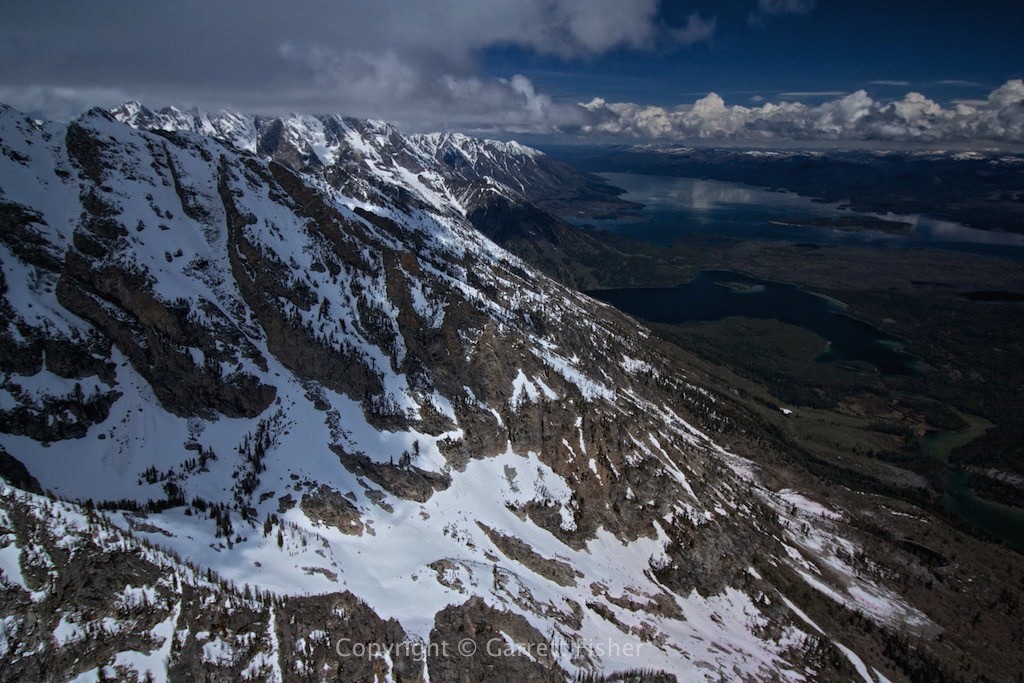 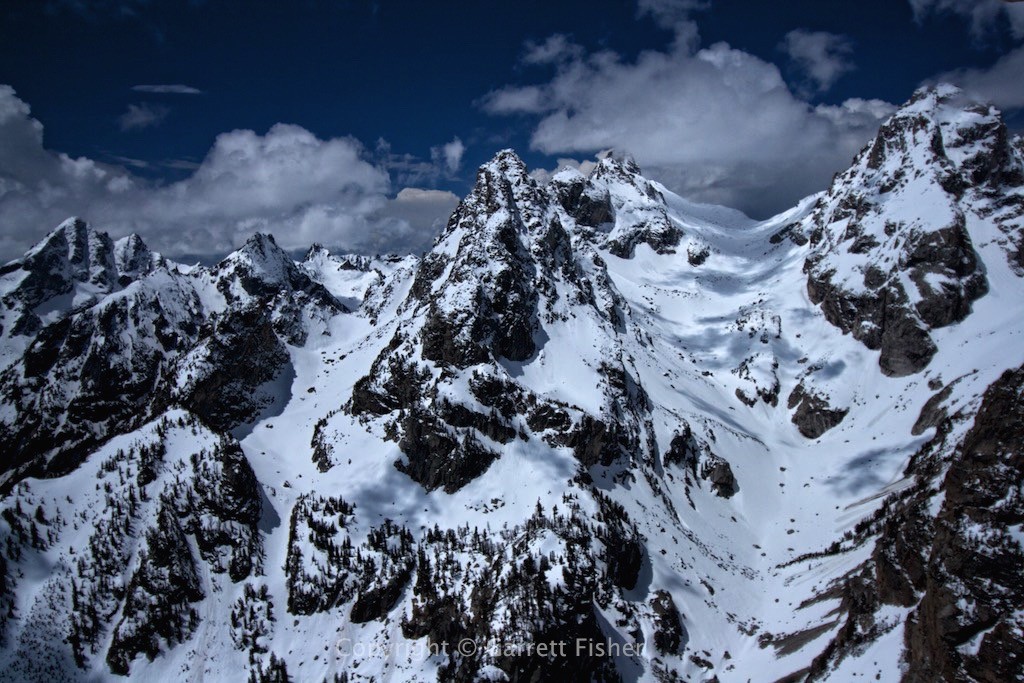 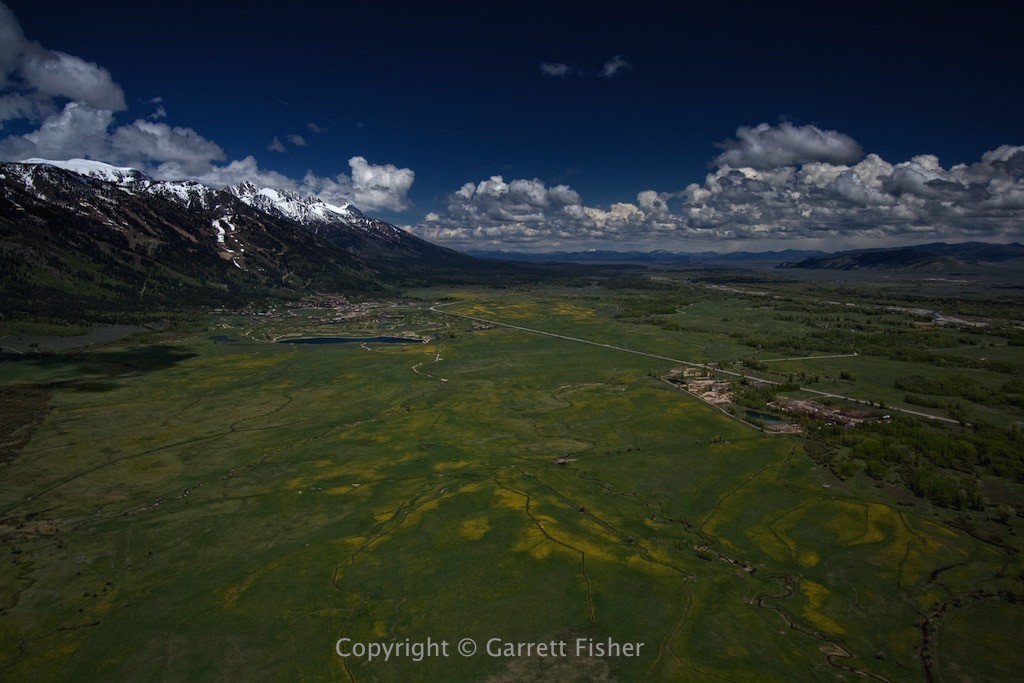