One of the first things that I fantasized about when moving to Spain was to visit the Alhambra in the PA-11. It is a notion that is derived of having no clue whatsoever of cause and effect and the litany of macroaggressions one must face when operating a private aircraft in Iberia, which explains why more than half a decade has gone by since my initial illusions before I found myself operating the second symbolic steed of economic inequality above Granada.

The Alhambra, arguably one of the most famous tourist sites in Spain, dates back to possibly the Roman era though owes its fame to the Islamic era as it was a major site during the time when Spain was ruled by the Moors. It was later an early royal court of the Spanish monarchy, the site where Christopher Columbus received royal approval to embark on a mission that would discover two continents and change everything. A successive Spanish ruler decided to expand the site, gave up, squatters moved in, it fell into disrepair, and then Napoléon discovered the place all over again, smashing part of it in the process. Now it is a tourist attraction, which means that the site is in effect a microcosm of 1000 years of Western history.

It happens to be situated above Granada, a picturesque Spanish city, and below the Sierra Nevada. The semi-arid orchards of Spain lie to the west, a rugged land that on one hand feels like a desert and on another feels partially verdant and rich in agricultural production. Spain often has two personalities pervading the same land.

The flight was largely a commute in the beginning, as I had to pass over scrublands for some distance. I have found such terrain mostly in the American West, where rugged, harsh, mostly dry unforgiving land receives enough rain coupled with oppressive heat to yield some vegetation. The problem is that it is not enough moisture to create verdancy, and not enough dryness to yield the spirituality of a desert.

That terrain transitioned to orchard groves in abundance, which later got drier and more textured the closer I got to Granada. Once I got to the western boundary of Granada’s decently sized Class D control zone, I made contact with the tower, who pulled a classic Spanish trick: without any other traffic in the control zone, I had to follow “standard procedure,” which was to enter at point Sierra and then proceed northeast to the city center. The problem with this scheme was that it involved a 10-minute detour to the south, while climbing more than 1,500 feet to avoid tall terrain. Once I got there, I was told to descend back toward Granada and to “stay below 1000 feet above the ground.” The only problem with that was….800-foot-deep alternating canyons below. If it was America, I would have been yoyoing (well, I wouldn’t have gotten such a dumb clearance, but I digress), though since it is Spain, 1,000’ AGL really means 1,000 feet or so, kind of, as a reasoning person would see it, so ‘just don’t cause any problems.’

While I would be inclined to reduce the charade to a circus, I happened to fly over stunning terrain, so there was no complaint. What then followed surprised me, as most control zones have elaborate VFR tunnels to avoid commercial air traffic and city centers. I was cleared to orbit over the Alhambra and Granada’s city center, provided that I “stay at 1,000 feet or below.” So, there I was, slaloming around with the flight path of a drunkard, happily snapping photos, not too far above the dense buildings in Granada.

After the Alhambra naturally comes the Sierra Nevada. For those that do not understand Spanish, “nevada” means “snow” or “snow covered” in this use, which is true to its form on that day. It is a range small in length while happening to be the tallest mountain on the Iberian Peninsula…even taller than the highest peak of the Pyrenees.

Everything in Spain is subjective. I had spoken to a taildragger pilot some days before, and he assured me that the restricted zone over the Sierra Nevada was negotiable with Granada ATC, whereas another, shorter restricted zone down to the coast was utterly inflexible. The reverse was true. I was not allowed to fly over the Sierra Nevada proper due to it being a park (though people could downhill ski and drive on roads through it…). At the same token, the controller wondered why I was even asking for permission about the coastal restricted area, as if it is self-evident that it is not restricted.

After a flight along the coast and a refueling stop at La Axarquia, I was inclined to finally visit Ronda. When I went to cross Málaga’s control zone using the VFR tunnel (as I had done in the past), I was told that I could not enter it “at this time of day” and either to head 25 miles out to sea or 50 miles north. I asked to climb to 7500’ to overfly above it, and they sighed and said they’d make an exception and allow crossing the VFR tunnel at 1,500’ (that subjectivity thing appears again). It took 20 minutes to cross, as I had to hold tightly many times due to constant airliner traffic on two runways. The crossing procedure involved precise overflight of both thresholds, right over an airliner beginning its takeoff roll! It turned out to be a neat experience.

Since at this point time was running out on daylight, Ronda again was abandoned. I opted to climb to 4,500 feet and fly westbound along the Mediterranean ridge. It was a fantastically textured flight, with Morocco visible clearly on the horizon on the other side of the Mediterranean. There is something about Africa on the horizon that stirs the soul in a way that wasn’t expected. I enjoyed the view of it for 30 minutes for the crossing of the Sierra de Grazalema, then over Jerez’s control zone (and another airliner taking off), before sneaking into Trebujena just in time.

Textured terrain before rugged scrublands. South of Morón (pronounced “More-OWN”). There is an Air Force base there, and it was delightful to hear an American refer to it as “moron” on the radio. 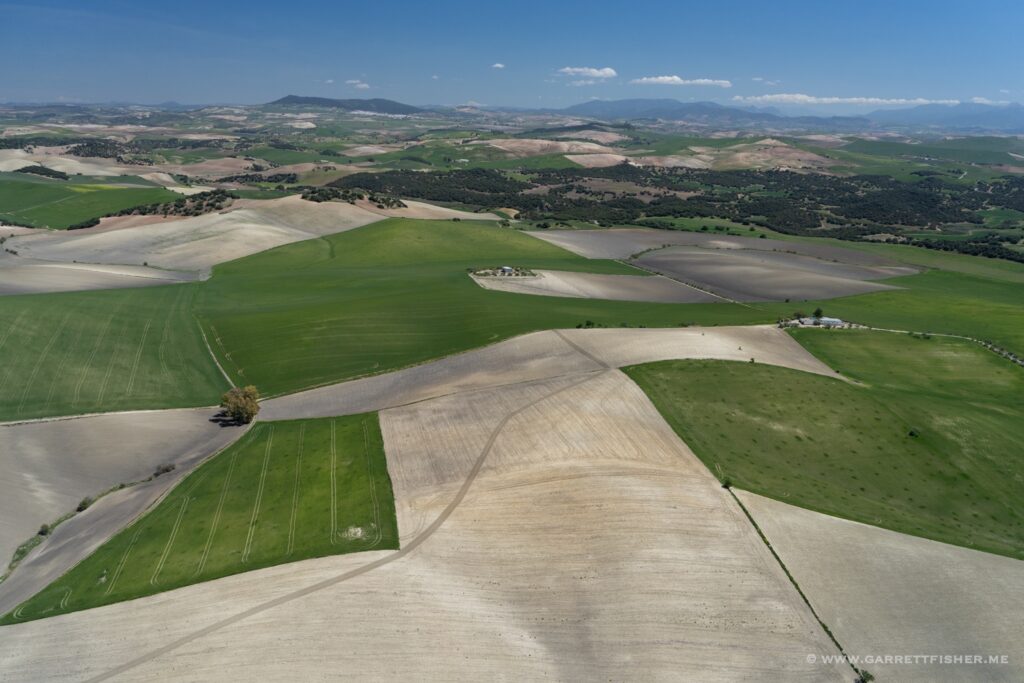 Rugged scrublands. Without humans farming vast swathes of Andalucía, it probably all would look like this if entirely natural. 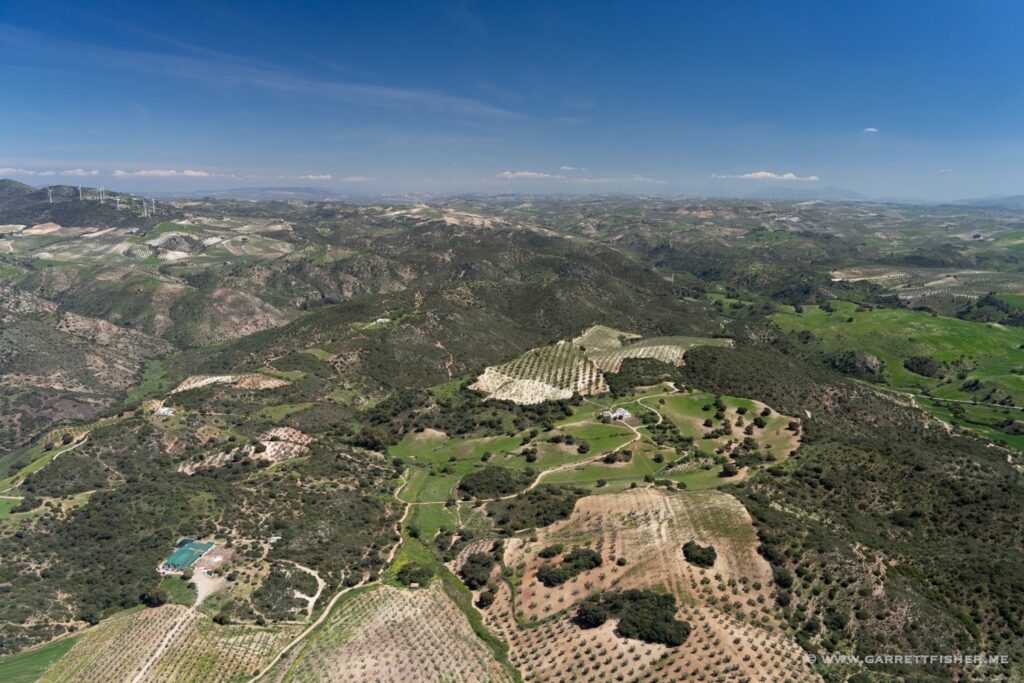 Where Spanish olive oil comes from, 60 miles north of Málaga. 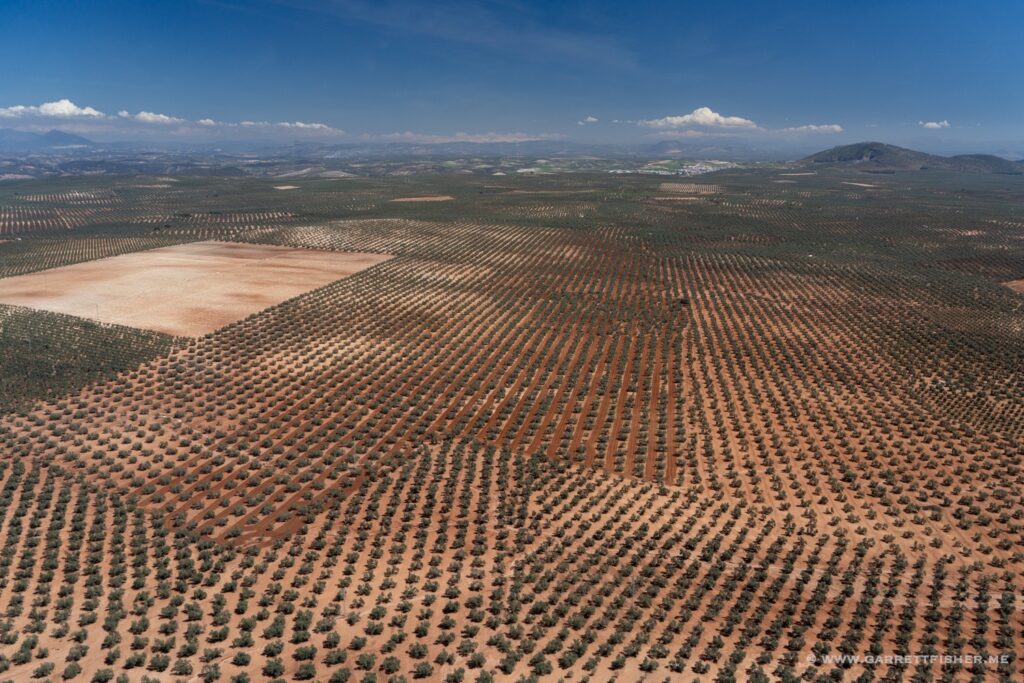 Embalse de Iznájar. Lots of rain recently has nearly filled it up. 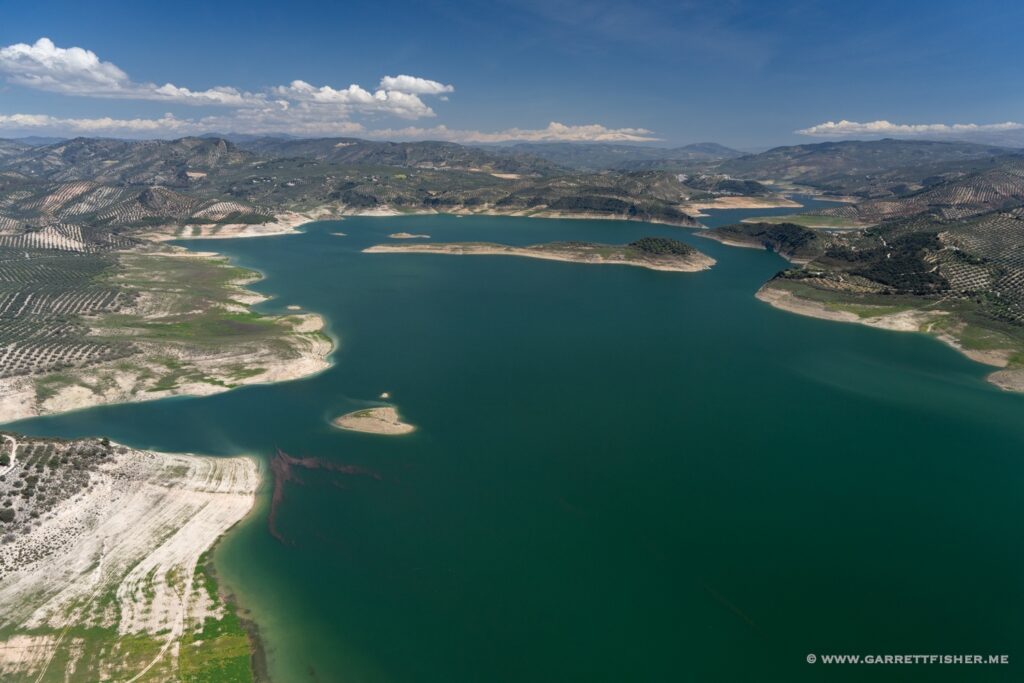 Flying southbound to point Sierra. Note the Sierra Nevada in the center. I am intending to go to the left horizon, yet am flying to the right for no other reason than Iberian culture coupled with an obtuse controller. 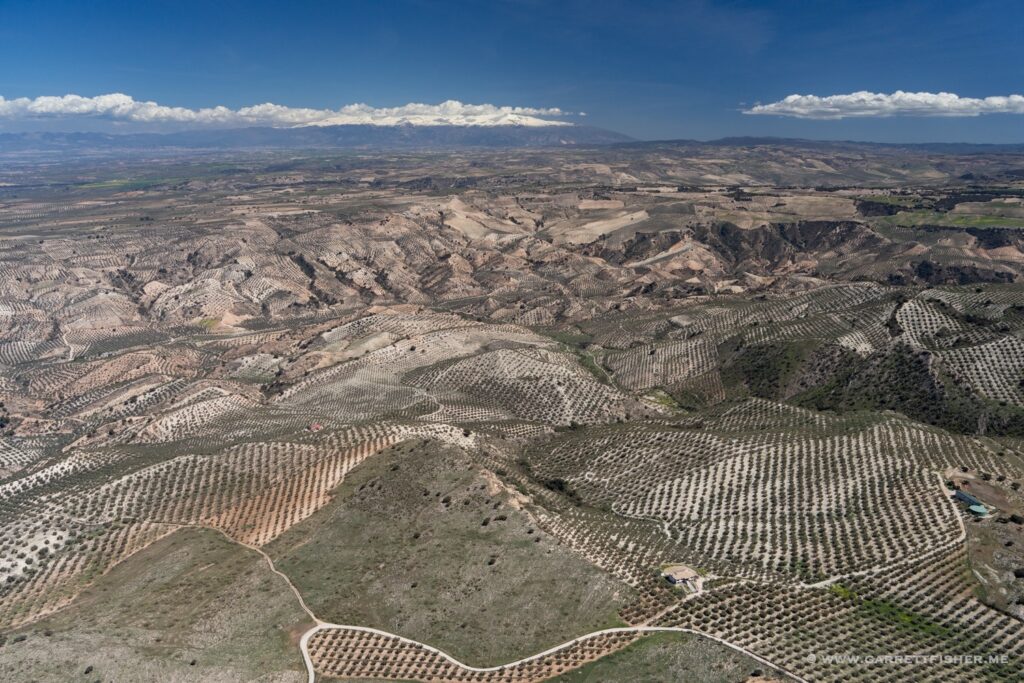 On the way back down toward Granada. Not complaining that I saw this! 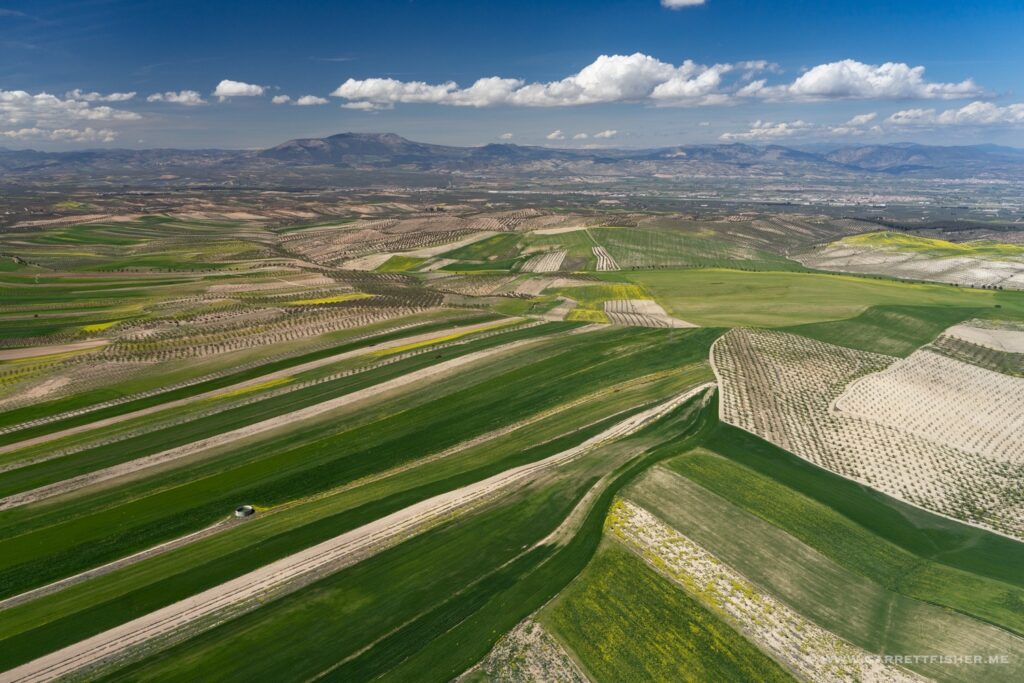 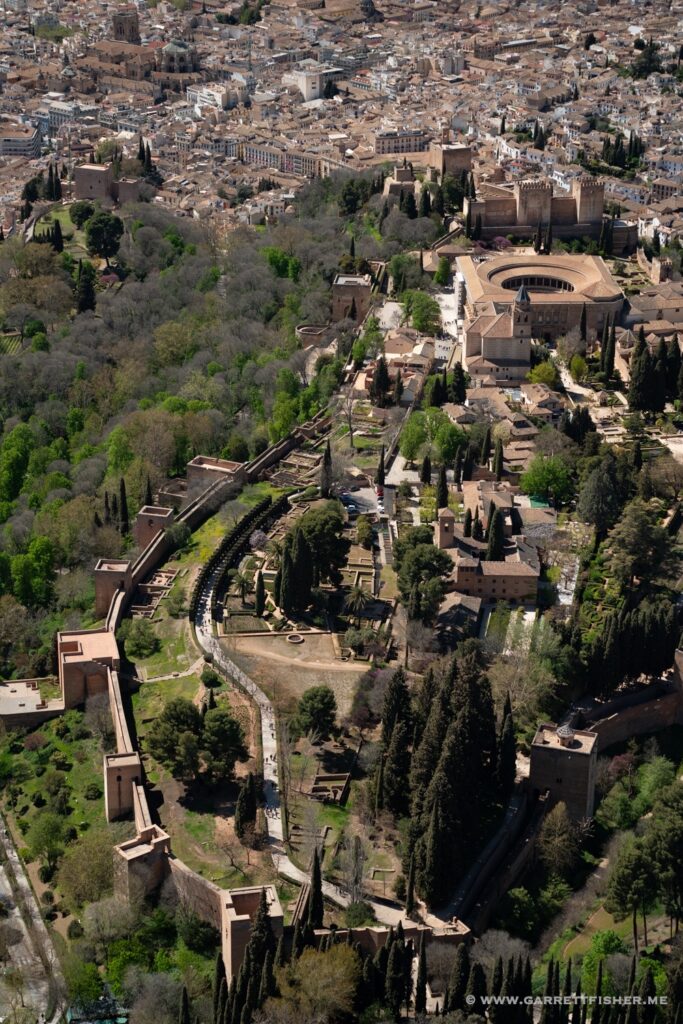 Alhambra in the center, Granada below, Sierra Nevada on the horizon. 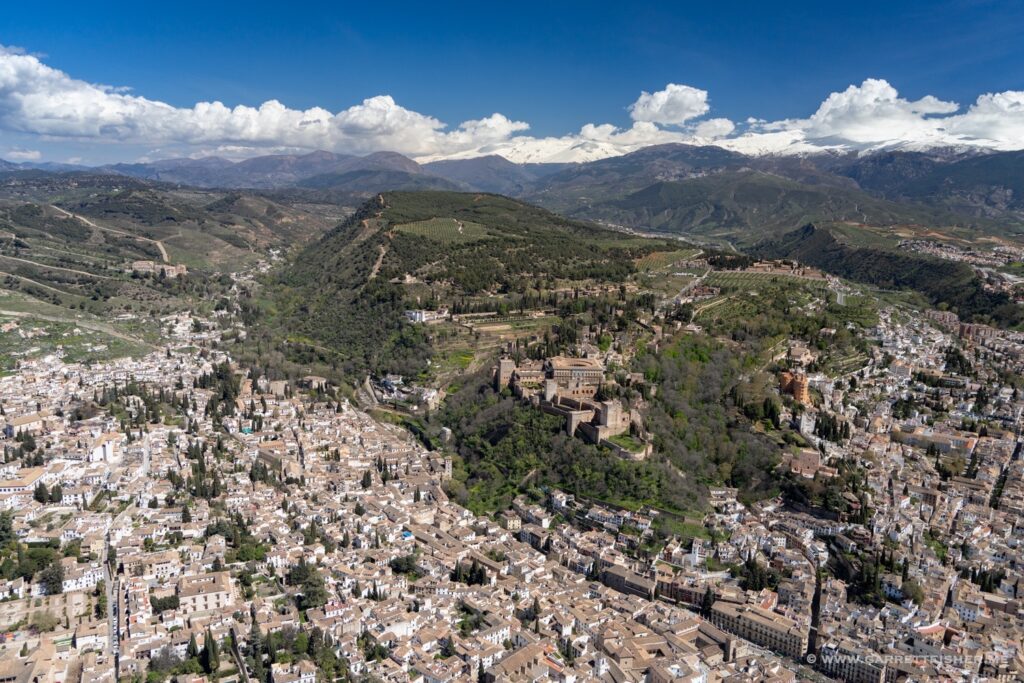 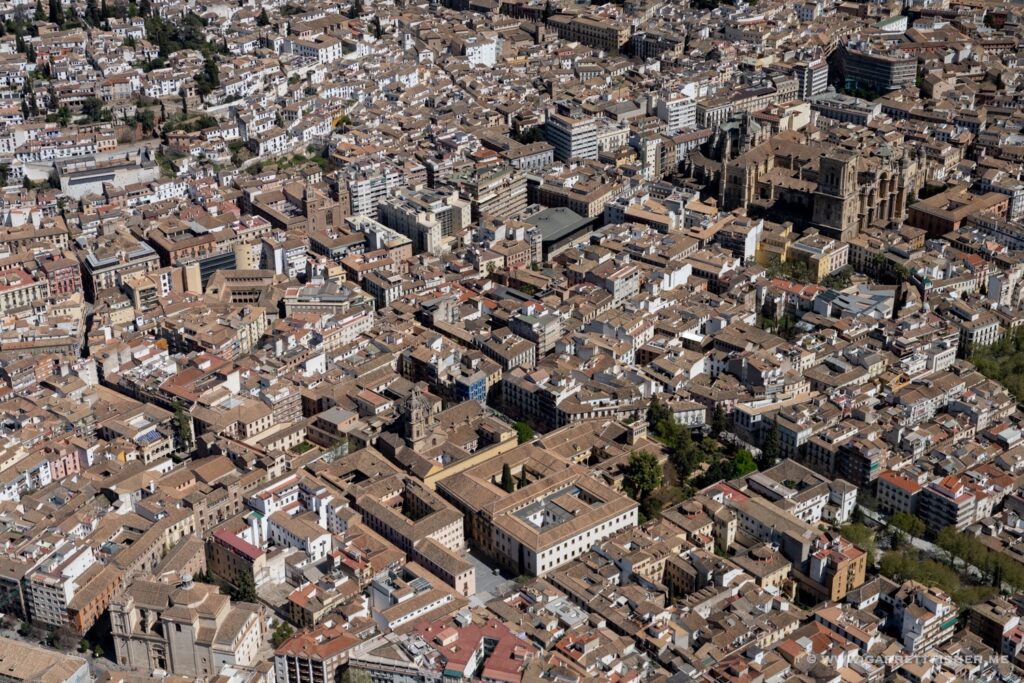 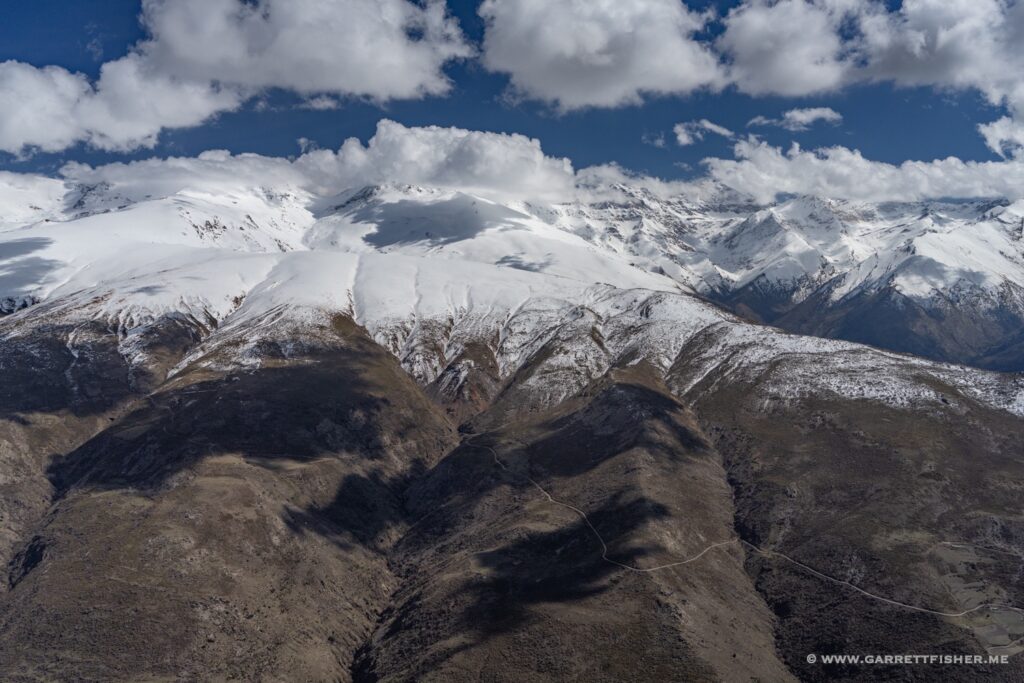 Sierra Nevada with the Mediterranean on the right horizon. 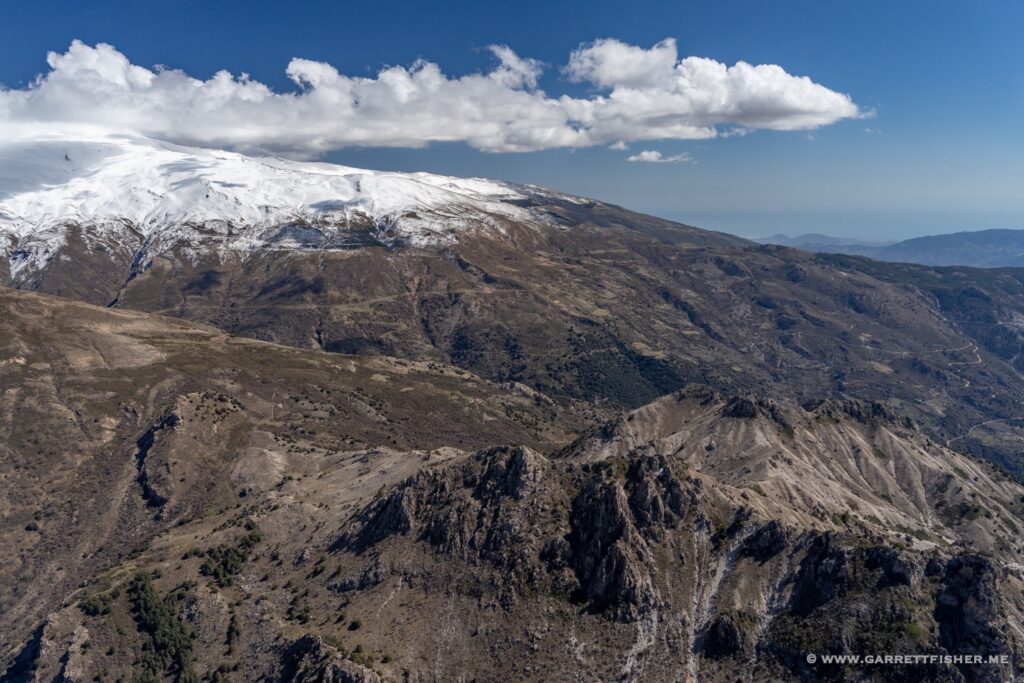 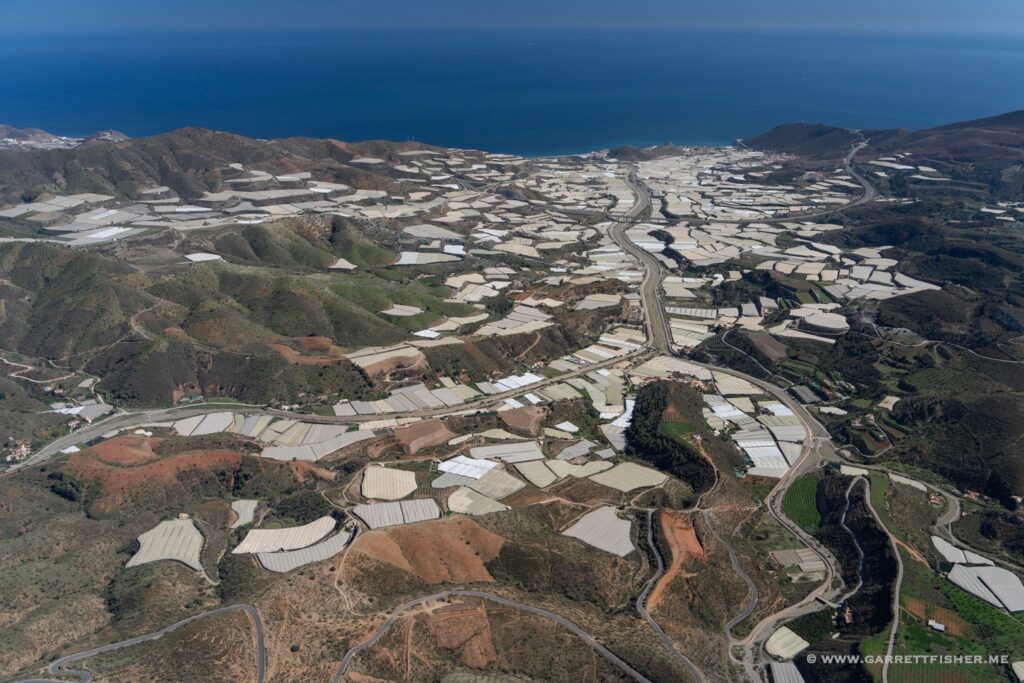 Punta de la Mona. A mona is either a female monkey, a drunk person, a small attachment to an obsolete piece of armor, something to do with a hair clip, a bow, or some esoteric attachment to a bullfighter’s uniform. 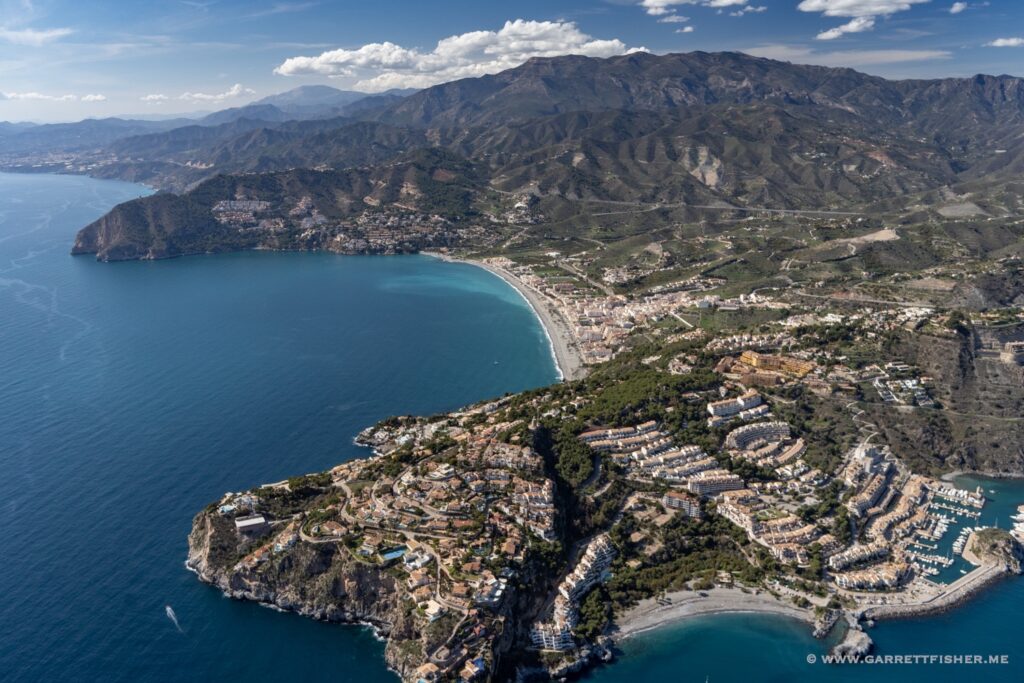 Málaga airport, just before crossing at the thresholds. 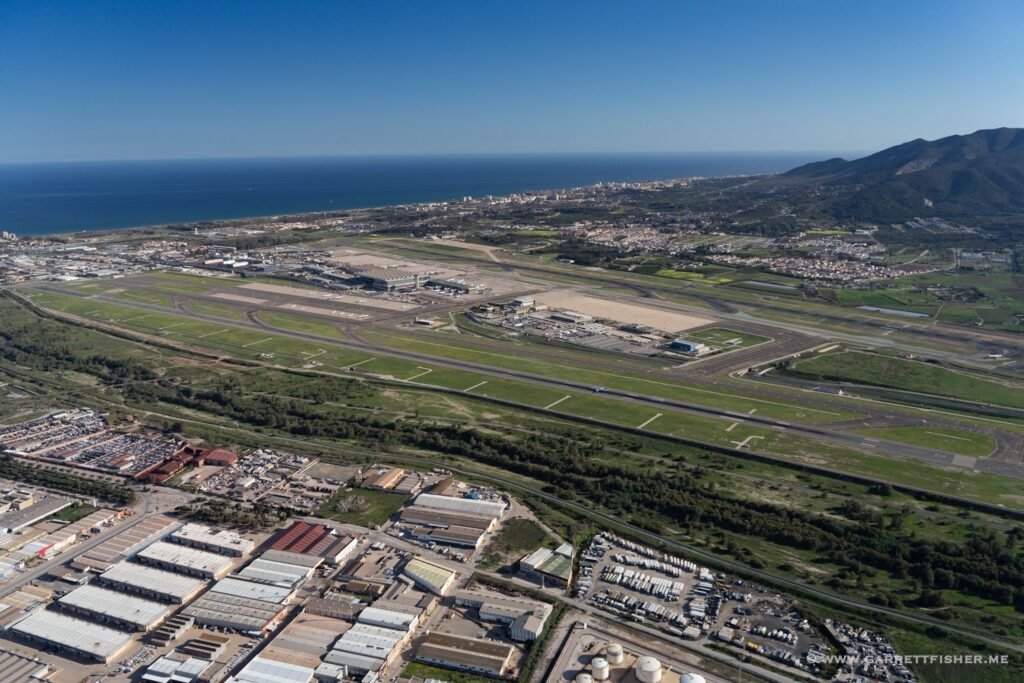 Textured Mediterranean ridges north of Marbella. Africa is barely visible on the horizon. 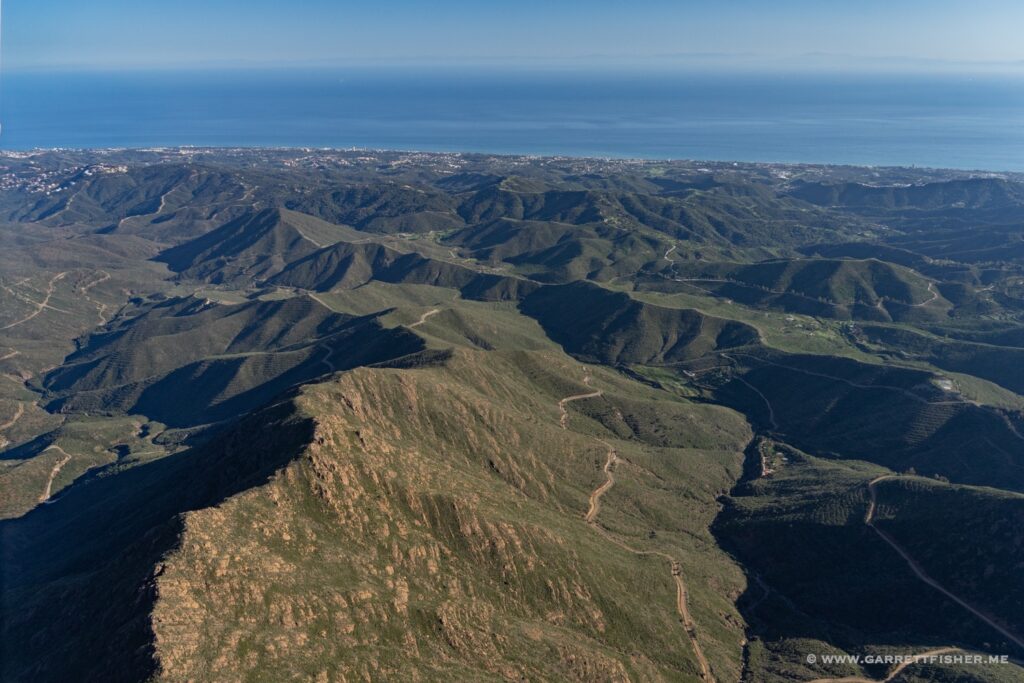 North of Estrepona. The Rock of Gibraltar is on the horizon, as are the mountains of Morocco. Something about seeing Morocco makes me happy every time. 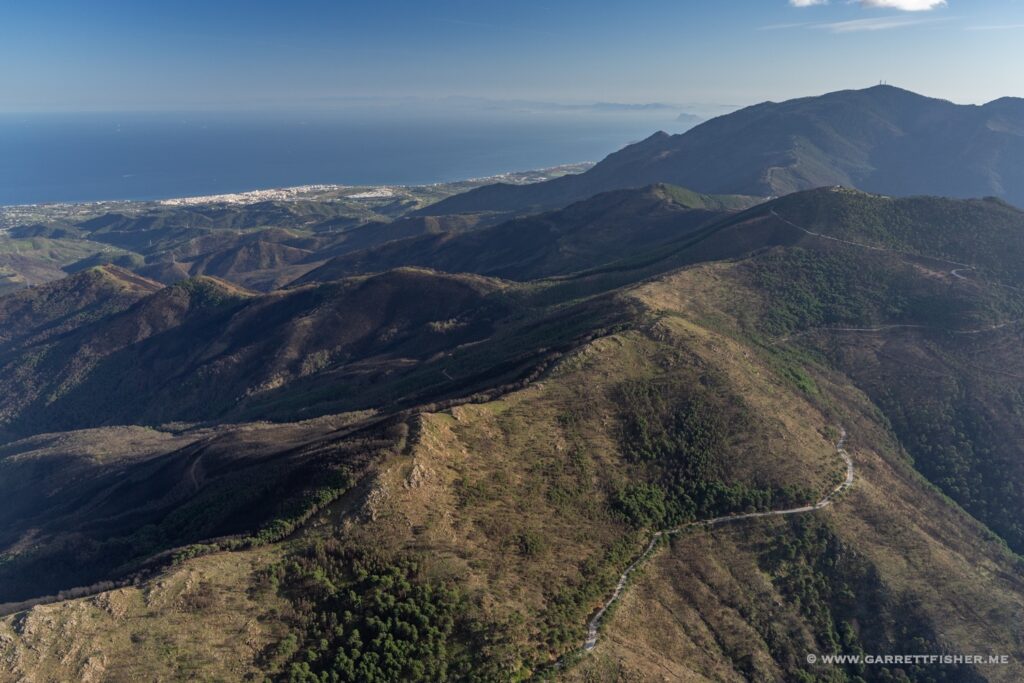 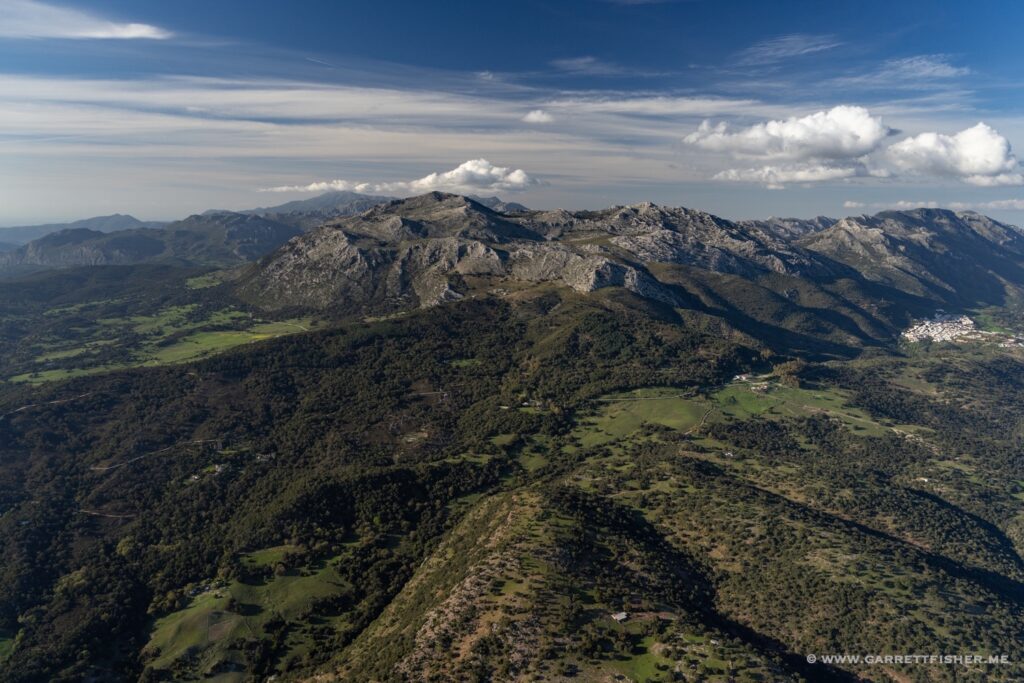