I’ll warn in advance: I get very passive-aggressive around Christmas. In honor of Festivus tradition, this is my Christmas “airing of grievances.” For those that don’t give a hoot about my philosophical sardonicism, there are pretty pictures taken from the airplane at the bottom like usual. If I am going to spew vitriol about misleading tradition, I shall at least keep my traditions going.

This year’s rampage started by watching some of our regular TV shows. Of course, the Styrofoam snowflakes fall as actors stroll down magic streets in media sets in Los Angeles, bathing in the romantic warmth of friends, family, generosity, good tidings, and hope portrayed as some location in the Northeast that looks exactly nothing like those places.

More than half of people that fall in love end up hating each other so much that they get divorced. For those that can stand the marital union, has anyone thought how many families actually like each other? Who thought mixing family with happiness was a good idea? Perhaps the ideal of Christmas only works because it is lubricated with massive amounts of alcohol.

Our lovely entertainment industry also fails to consider how many people spend Christmas alone while drinking and farting on the couch, forgotten by all of this pseudo love and bliss circulating around.

Then there was the matter of the fact that the entire world does not do Christmas like it is done in America. It has been eerily quiet here in La Cerdanya, and I was vaguely aware that we are about to embark on a massive orgy of merrymaking, though that starts after the 25th. I also recalled a friend of mine noting Muslim women in Malaysia, in a full black head covering, shopping with a Santa hat on. Of course, our lovely plastic snowflake movie set hides anything other than a scripted stereotype, so we had to go looking to find out how things are done here in Catalonia.

Catalonia has a tradition of the “caganer” in Nativity scenes. It is a peasant with a traditional regional hat, squatting, pulling his pants down, and taking a dump (the word translates “shitter”). It sits not too far from Jesus in a Nativity and depicts gifts and generosity and all that happy horse human shit (though I can’t find one even though I am looking). To quote an editorial in a Barcelona newspaper, “A nativity scene without a caganer is not a nativity scene.”

Add to that the caga tío, the “shitting log.” Yet another tradition of Catalonia, a wooden log is filled with candies, adorned in mild costume, and ordered to defecate them out. When it does not, it is beaten with sticks by everyone present at the gathering until the candies come out of the rear end. This is done while singing a song, for which I have pasted the lyrics below. Aside from the jaw-dropping oddity at play here, I can’t help but note the cultural ramifications of programming children to act like a pitchfork and torch brigade. We wonder why Latin America has regular explosive orgies with people shouting “Viva La Revolución!” at the slightest provocation? When compared to angrily beating a log for not shitting candy, I am not sure which is more rational.

All of the above amusement leads me to another misleading bit of nonsense. What the hell is with a white Christmas? Has anyone ever looked at a weather map before dreaming up the plastic snowflake fantasy?

A shockingly small surface area of the globe regularly has snow on the ground in the winter. Even less has fresh, happy powder. Having grown up in the “Snow Capital of the US,” Buffalo NY, I was treated with more mud, slush, rain, and miserable weather that was anything other than the real version of plastic, fluffy snowflakes, even in the middle of winter. Of course, since family life is generally a pain in the ass for most of the world yet is packaged as brimming with romanticized bliss by the entertainment industry, it would be foolish to think that the weather would be left alone by the same purveyors of falsehood.

With that being said, we got our first mid-mountain snow some weeks back. Instead of being isolated to the summits, snow levels came halfway down to the house, creating some beautiful scenery, so I naturally took the plane up to check it all out.

Perhaps this is my passive-aggressiveness coming out again, showcasing the white Christmas most of the world doesn’t get.

On a side note, I am considering creating a ranking system for each post, depicting the probability that my wife will read it and proclaim: “You’re an asshole. I can’t believe you expect people to read your blog.” This is a 5 out of 5. 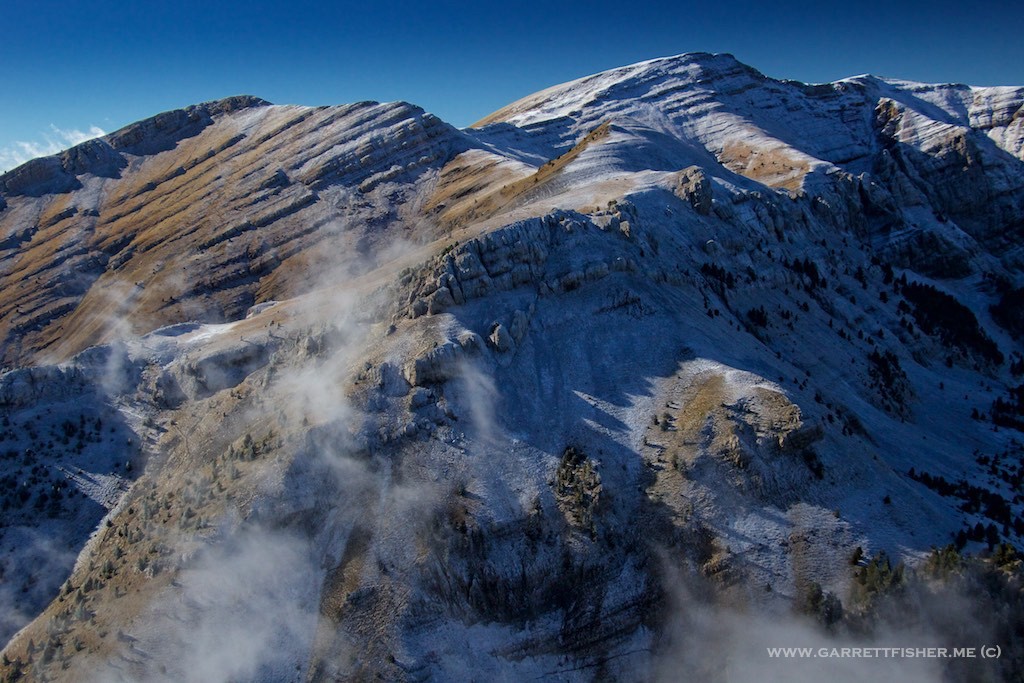 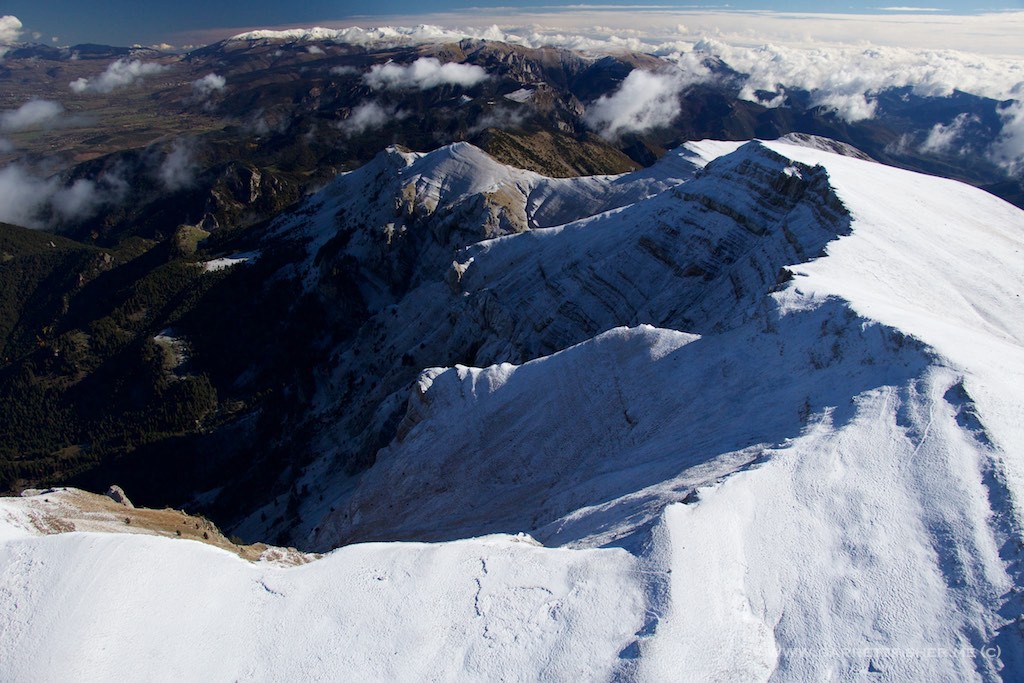 Some sort of deer equivalent, above timberline in Cadí-Moixeró. 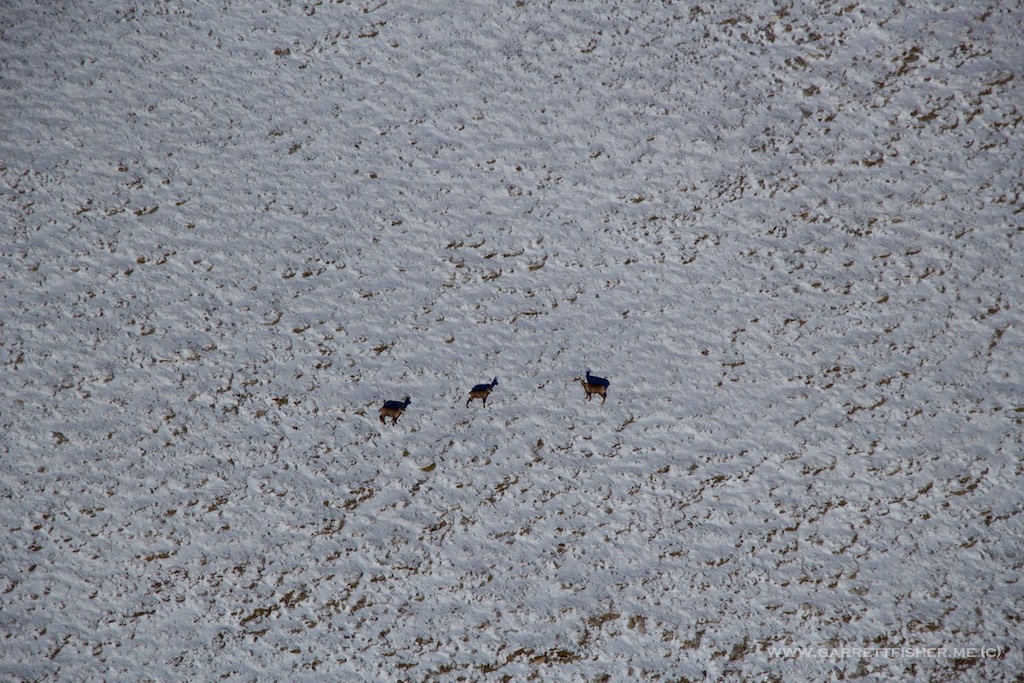 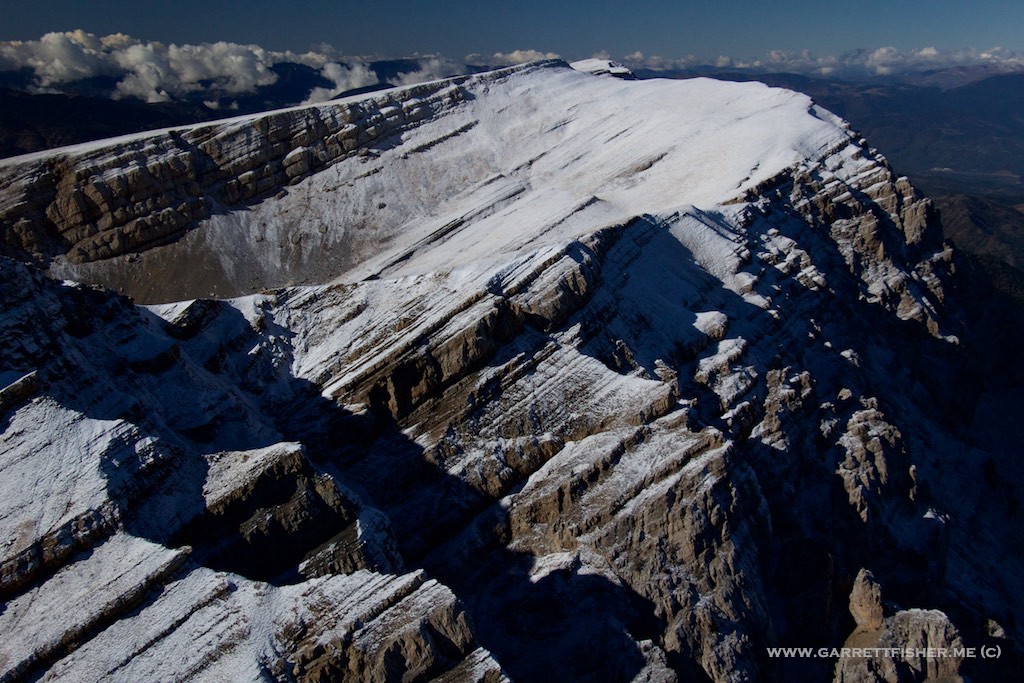 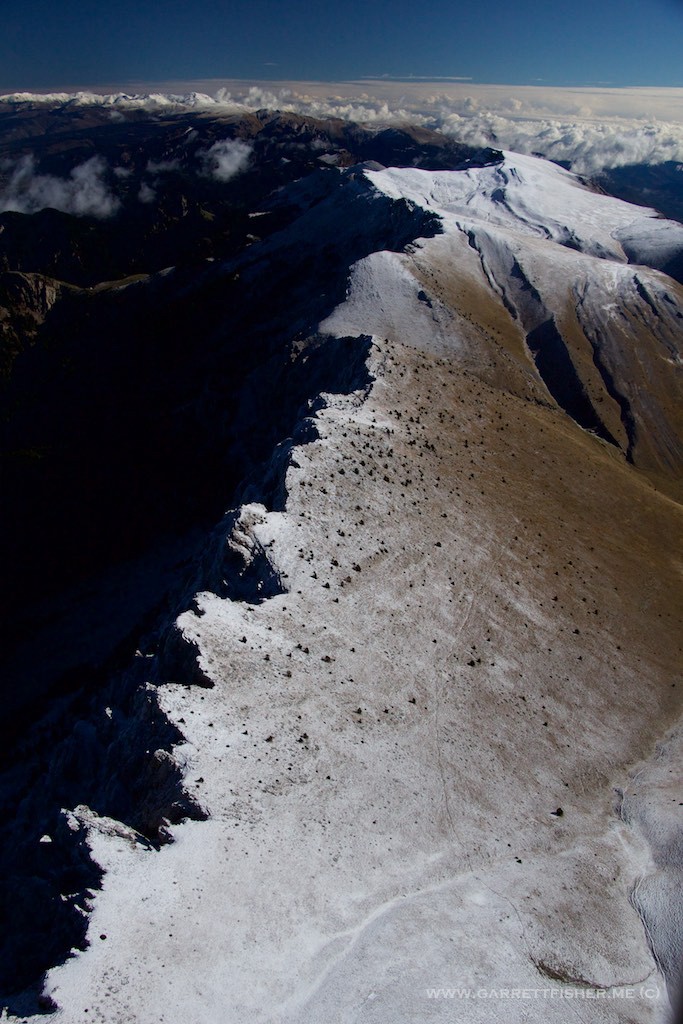 Crossing over clouds created by rotors, en route to Andorra. This is not the most well-thought out plan. 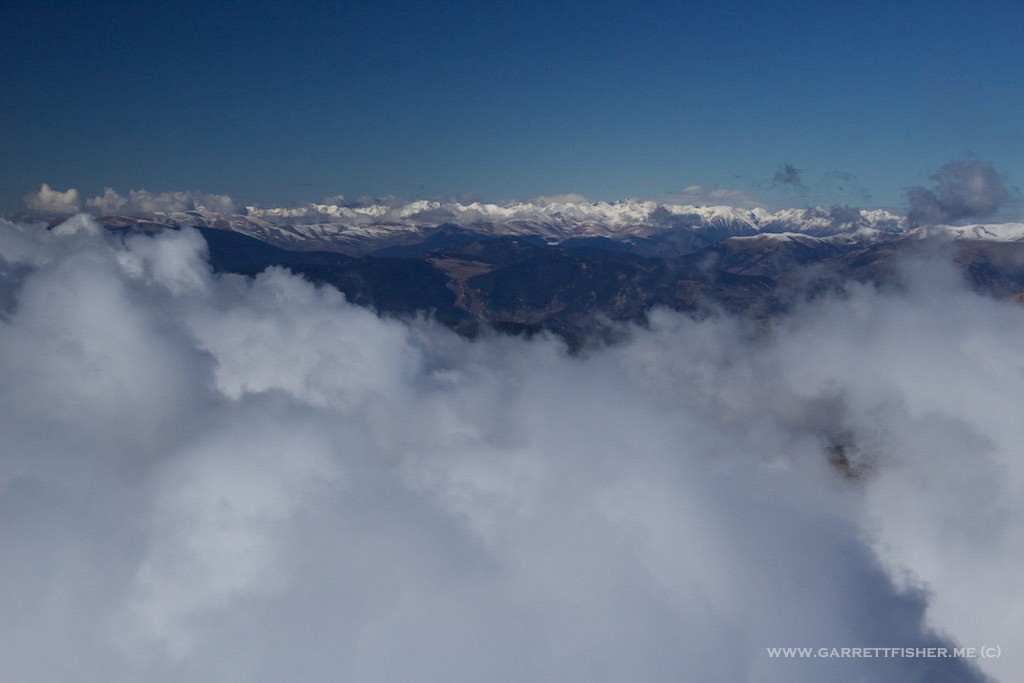 Note how rock textures are cleanly visible. This is associated with early season snow. Mid-winter, the depth of snow obscures subtle texture, and in spring, rocks start poking out with residual snowpack. I prefer early snows the most. 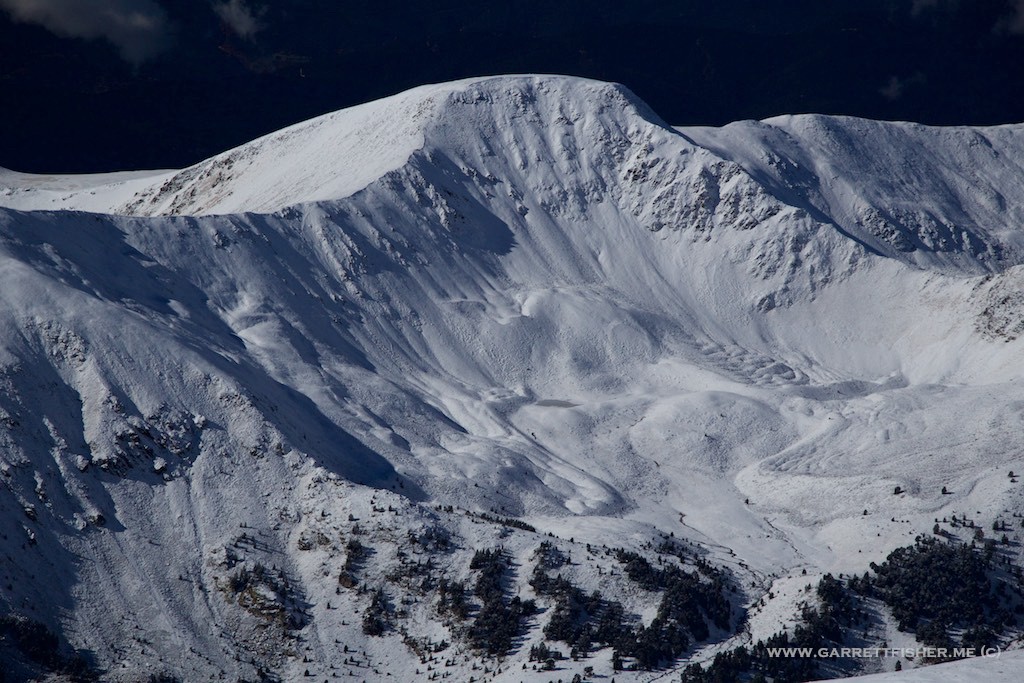 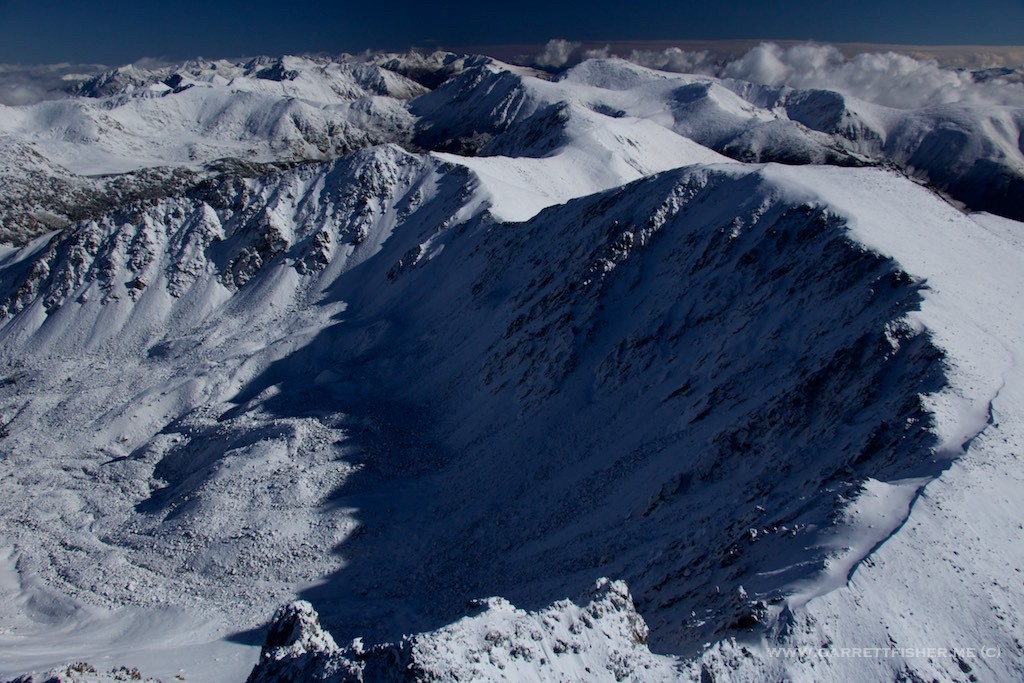 Someone snowshoeing with his dog. 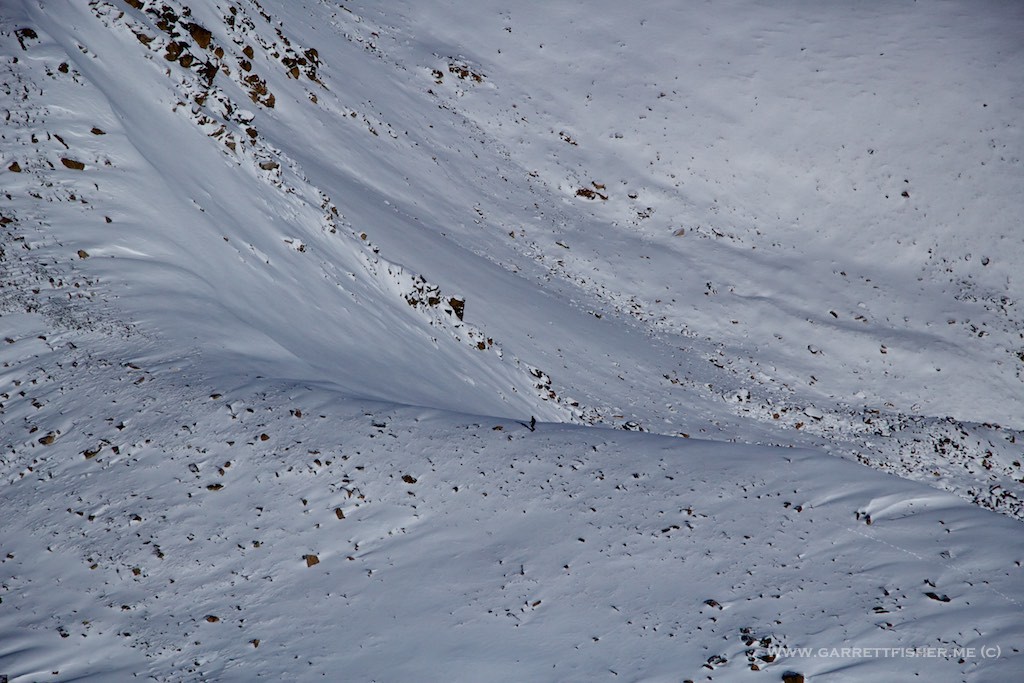 Looking toward Andorra. Got caught in a downdraft here. 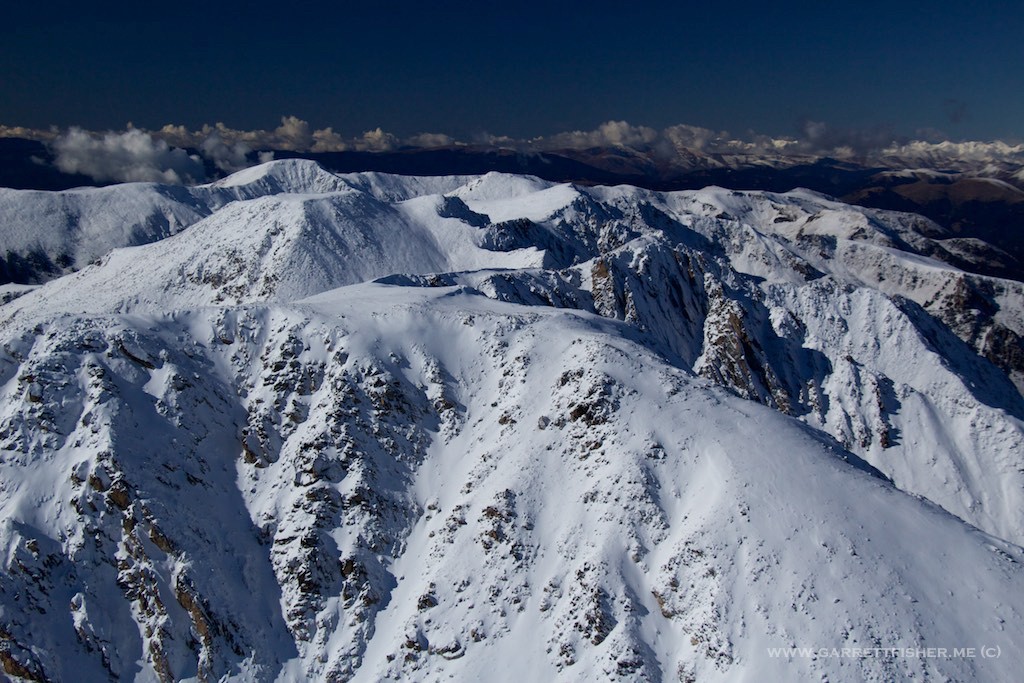 Spain, France on the horizon. Wind is going left to right, which means those clouds are a sign of “unexpected rough air.” 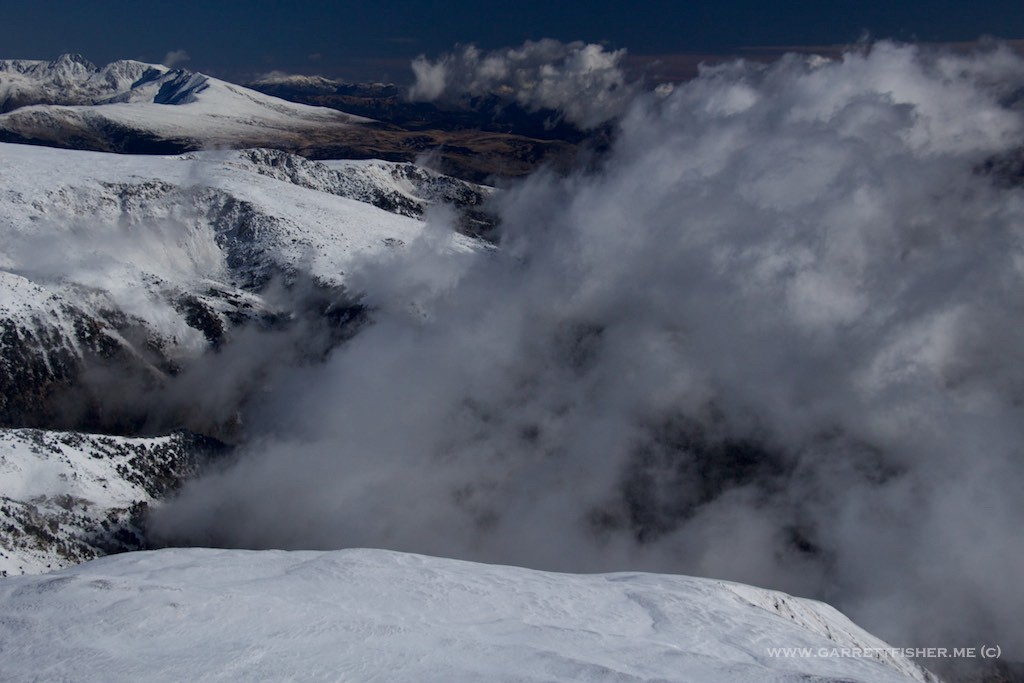 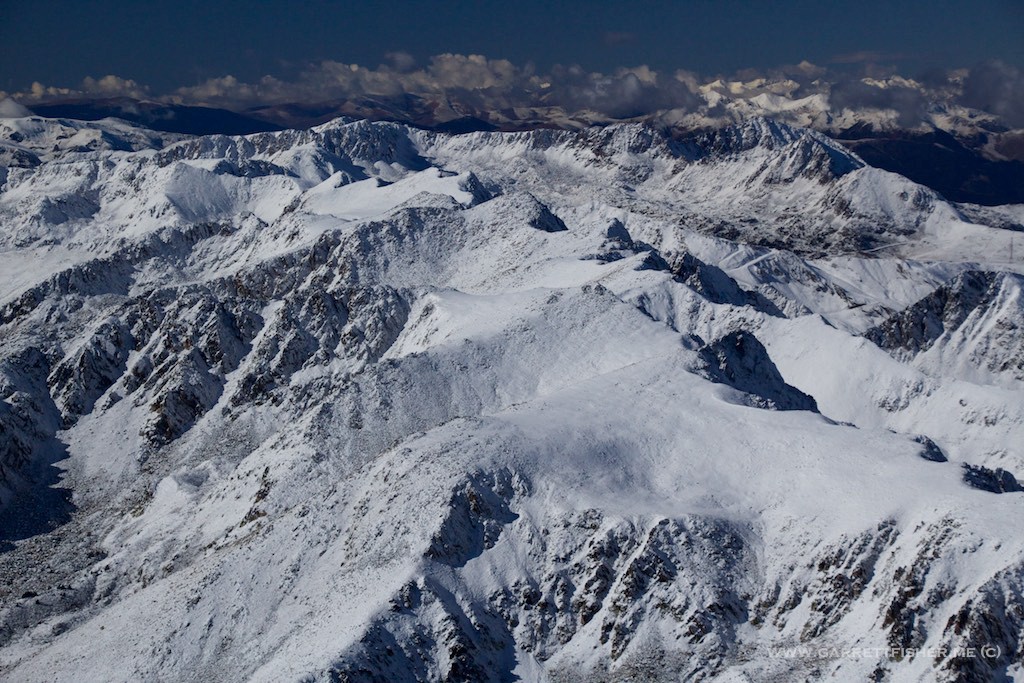 France. It was quite windy over here, creating the requirement to figure out the easiest way to get back to the airport, as I would need to cross to the downwind side, which is no good. 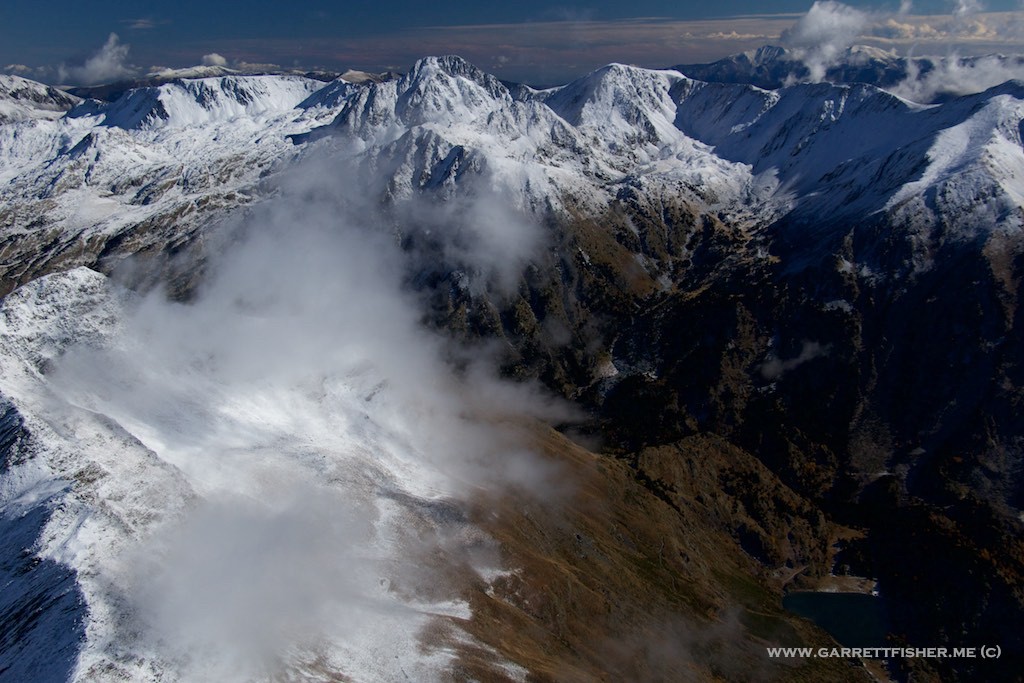 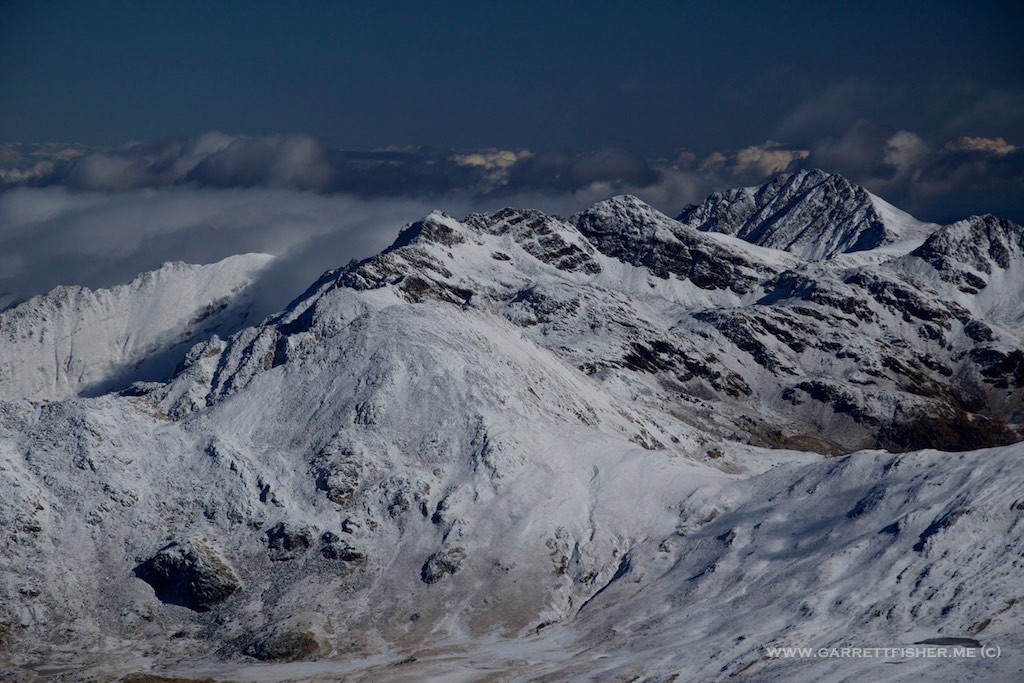 As the ridge line here is much steeper, and the clouds smaller, I fell back on my experience in the Tetons and Glacier National Park that, while severe terrain can have more vertical wind patterns, they also tend to be slower as the terrain itself disrupts them. Time to cross and see what happens! 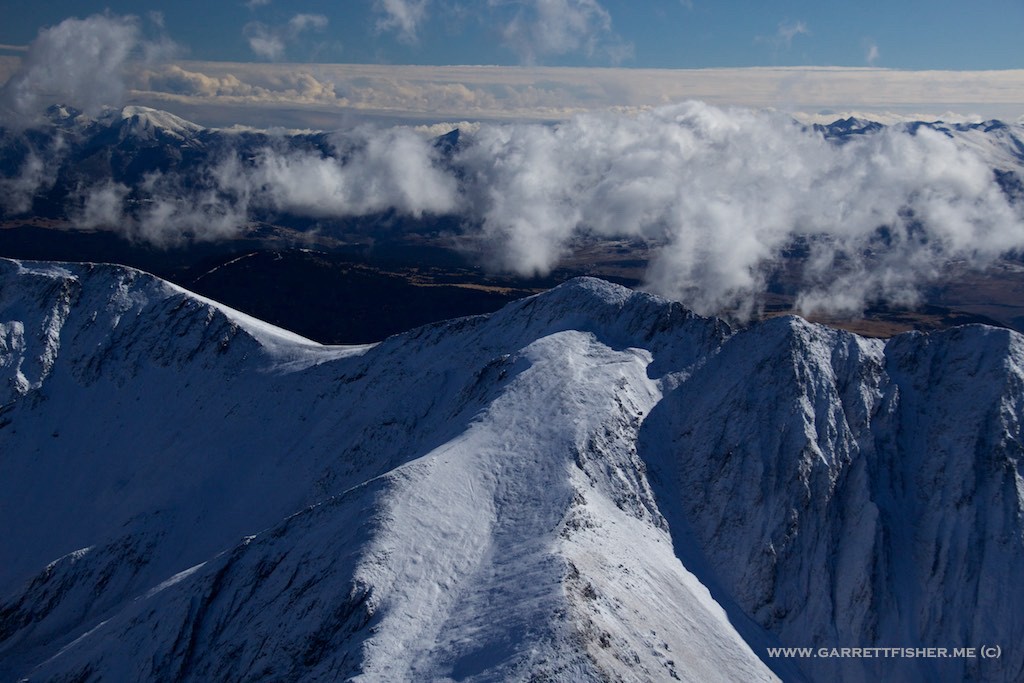 It was fine. Just a few bumps. 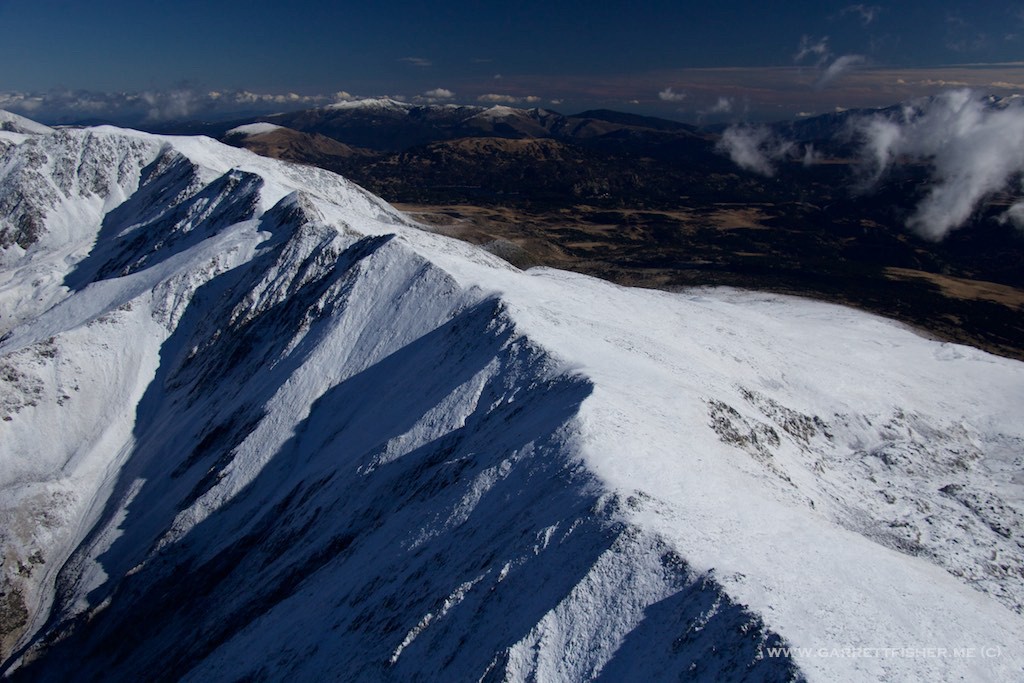 Pass to Perpignan. The Mediterranean is visible on the left horizon. 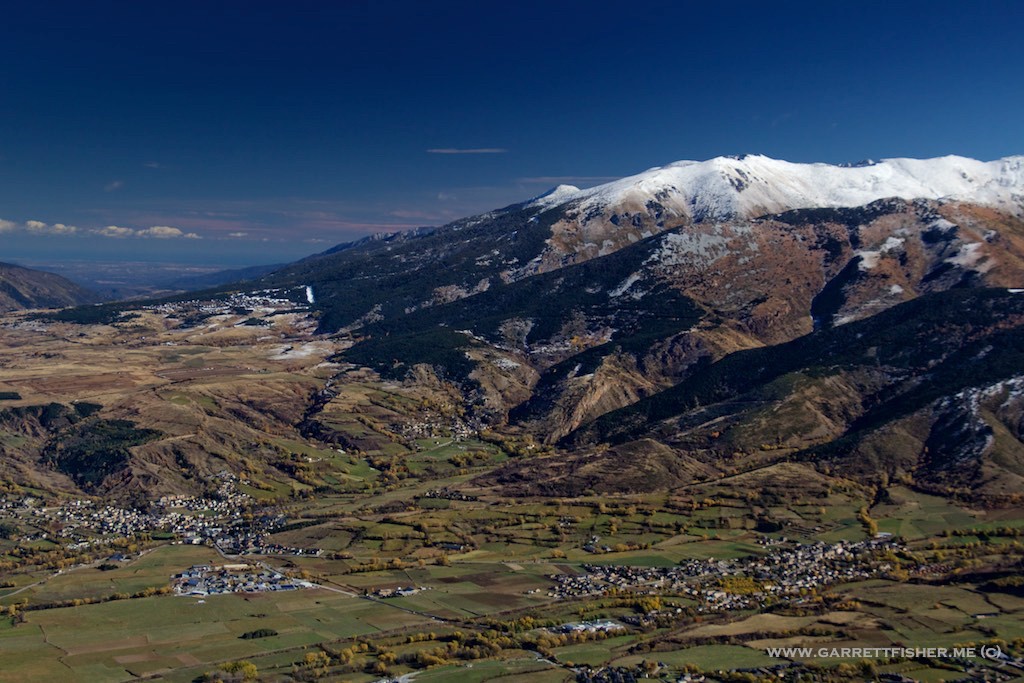 Was someone having a seizure when property lines were drawn? France. 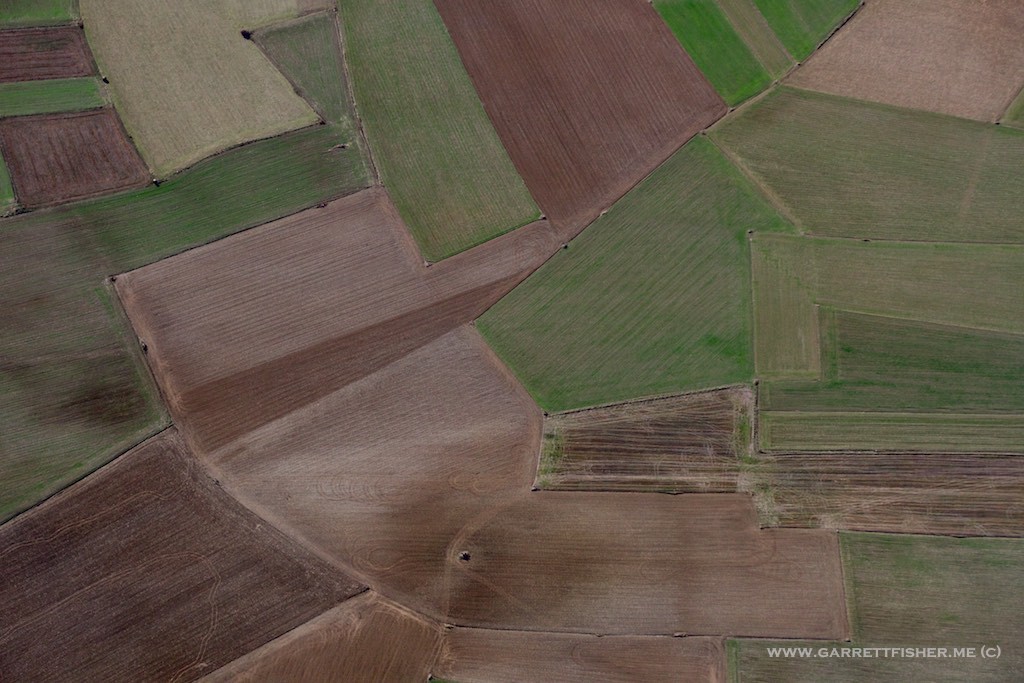 Really long final, runway 25, LECD. I had flown to the right of those clouds in the mountains. 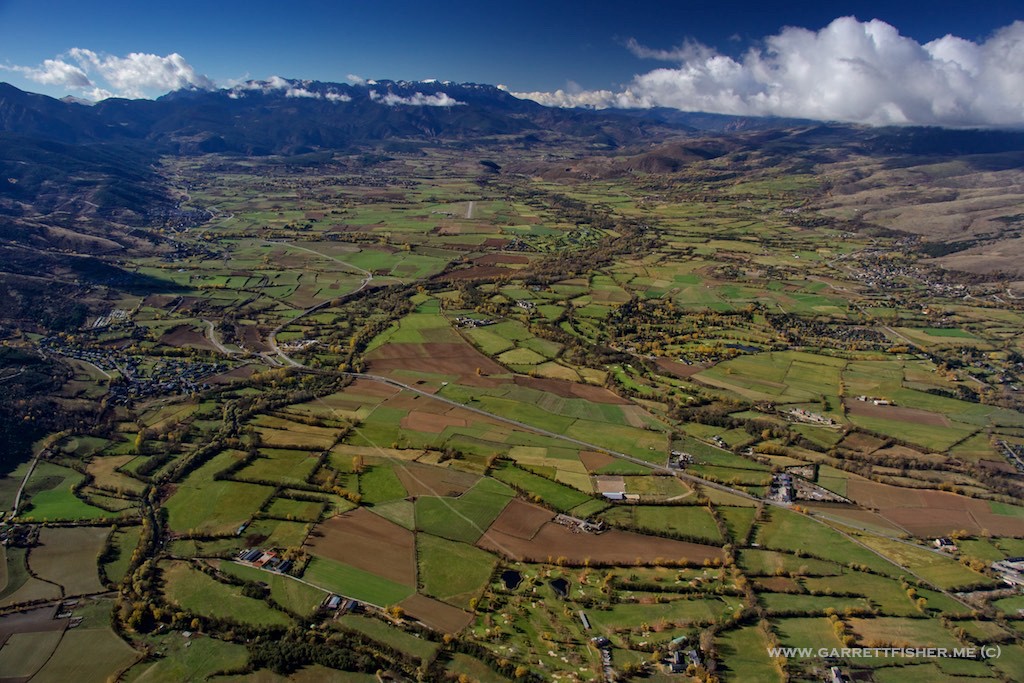