The section of the Atlantic Coast on the southern portion of Portugal has been on my to do list for a long time. When the PA-11 was based in Portugal, the section of coast managed to evade my efforts, as it would have required a combination of an overnight stay plus a dazzling array of confusing and extra fuel stops. The distance involved does not work for a single fuel tank Cub though….it works with a Super Cub.

After takeoff, I was told to head out to sea by Seville Approach, as a restricted area, that thus far had never really been restricted was in fact restricted. That meant a bit of a climb, then a dance around that zone and an active “real arms firing area,” more than likely associated with the US base at Rota. With that behind me, the trip was a westbound routing at 1000 feet above the ground along the Atlantic Coast.

Just before arriving at the Portuguese border, I saw my first glimpse of marshlands and coastal rivers, which reminded me of the southeastern US. As I crossed the border and continued toward Faro, the marshlands associated with distinct barrier islands, which eventually gave way to the Ria Formosa wetlands, which look like a miniature North Carolina Outer Banks. It was a majestic swirl of sand, marshes, islands, and sea…. normally prohibited due to the nearby Faro Airport. I managed to convince ATC to allow passage along the coast, which they did. At one point, I was asked to hurry up (I was admittedly flying at low RPM) as an airliner was on the ILS.

West of Faro, barrier islands give way to rocky promontories and caves famous to the Algarve. West of Portimão, my intended refueling point, I cut the corner northwest bound, avoiding the southwestern tip of Portugal (Cabo de São Vicente), and crossed to the west coast of Portugal, heading north until the sun fell behind clouds. Instead of carrying on to Lisbon as I had hoped, I turned around and methodically made my way down to the coast to the southwestern most point in Europe.

The ancient Greeks and Romans had names for this place, the latter calling it magical. Once Catholicism got involved, invariably a miracle happened, for which a shrine was erected. That was tended to by monks, through the destruction of the shrine during the Lisbon earthquake of 1755. In the modern era of great social awakening, an enterprising German speaking individual has paid homage to the rise and fall of great civilizations and their attendant spiritual connection to this point of geographic significance by parking a food truck on the premises: “Letze Wurst vor Amerika.” Last sausage before America.

Once I found it on Wikipedia some years ago, I never forgot. I had to make my pilgrimage to the patron saint of overweight bellicose German tourists.

Refueling, or should I say “paying the landing fee” at Portimão followed, which was a colossal exercise in the depths humans can achieve by directing their collective efforts toward mediocrity and underachievement. What was most unbelievable from the entire affair was a fusillade to my wife, ranting about how “I prefer Spanish incompetence as at least they have the honor and bravado to tell you to your face, without any shame, that it’s not their job and if you don’t like it, land somewhere else. These seemingly laid back non-confrontational idiotic morons make me look like an asshole if I get rightfully on a rampage at their brazen stupidity.” Unsurprisingly, my wife took a page from the Spanish playbook and reminded me that flying is my problem, and if I don’t like it, perhaps I shouldn’t do it. Point taken. Though I am still not over the fact that I have developed an affection for Spanish smugness and obstructionism. Life in Spain alternates between a warm affection and a never ending battle of wit over the slightest minutia. I suppose I don’t mind it.

Like a good Iberian, once my little bitch fit was done (even if largely to myself), the tide of fury blew over, and it was back in the skies for a 2 hour flight to Spain, along the same coast in fading evening light. The Faro controllers let me fly along the coast again (“hold at the lighthouse”), which is a testament to the positive side of Portuguese nonchalance. The restricted area was still restricted, so back out to sea, then a blazing descent into the rolling plains of coastal Andalucía. Almost six hours on the tach, all of it along the coast…a very splendid day. 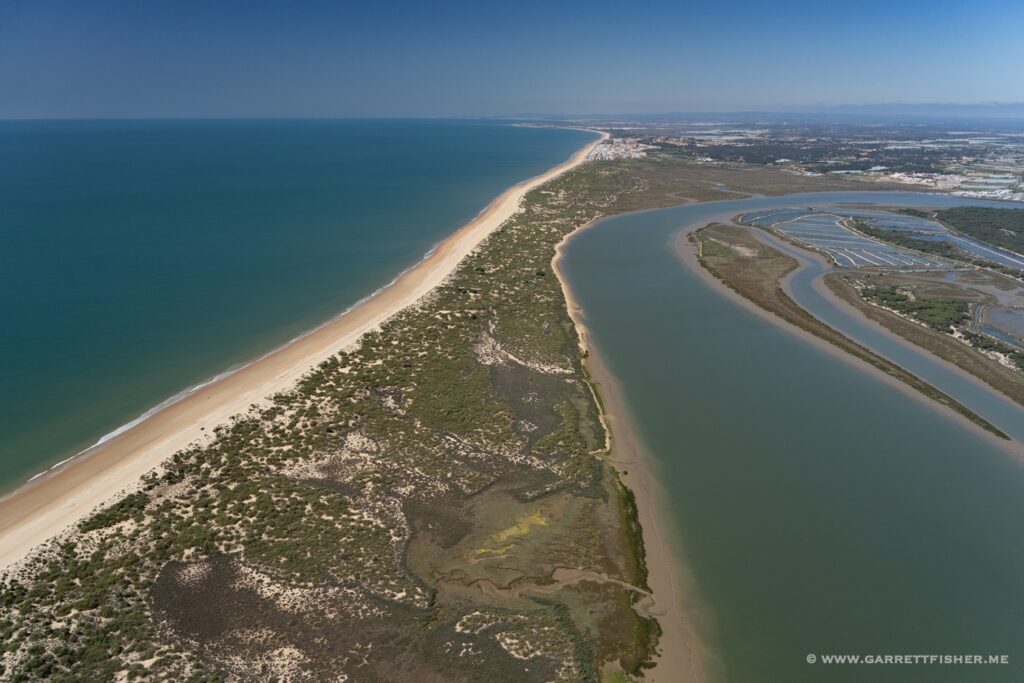 Isla Cristina, Spain…first appearance of coastal marshes similar to the southeastern US. 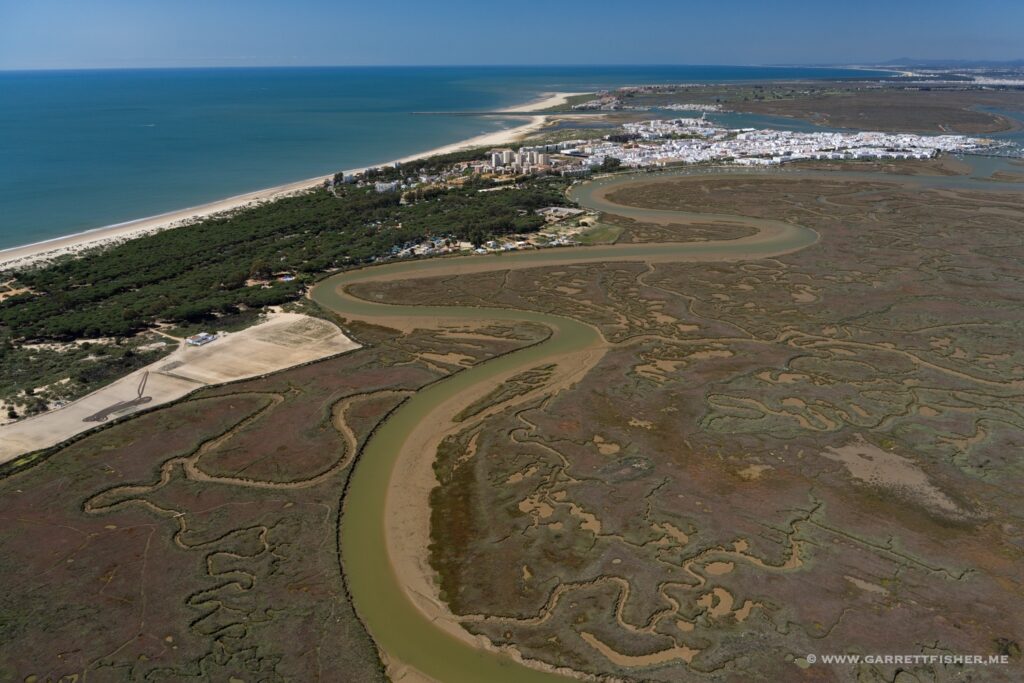 I have seen colors and textures like this in the Outer Banks and in the northern marshes of Bear Lake, Idaho. 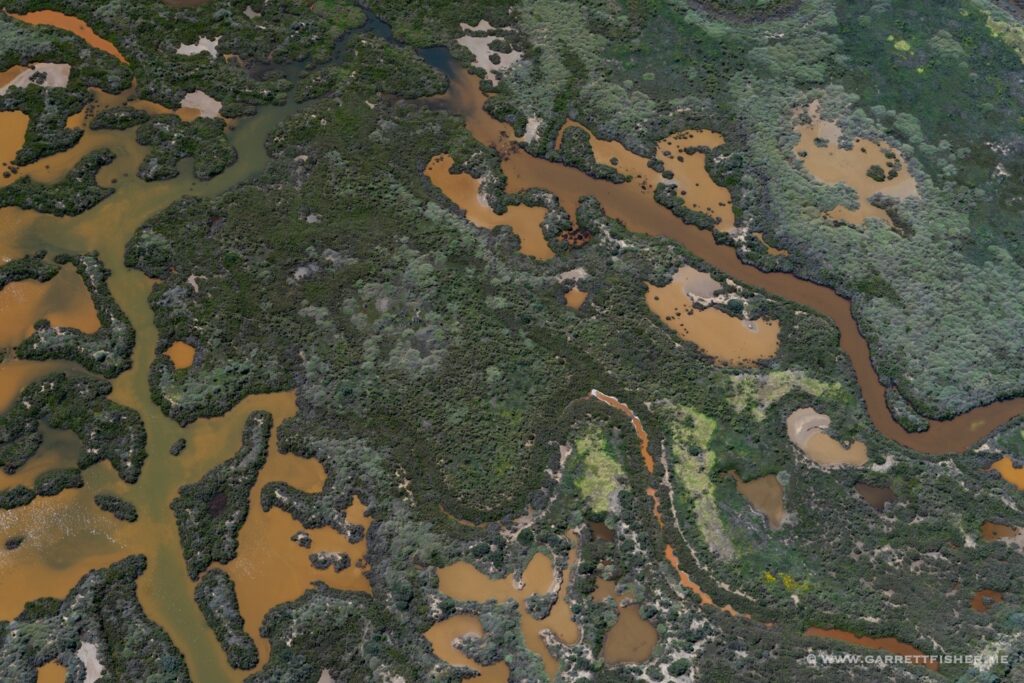 Over the border to Portugal. 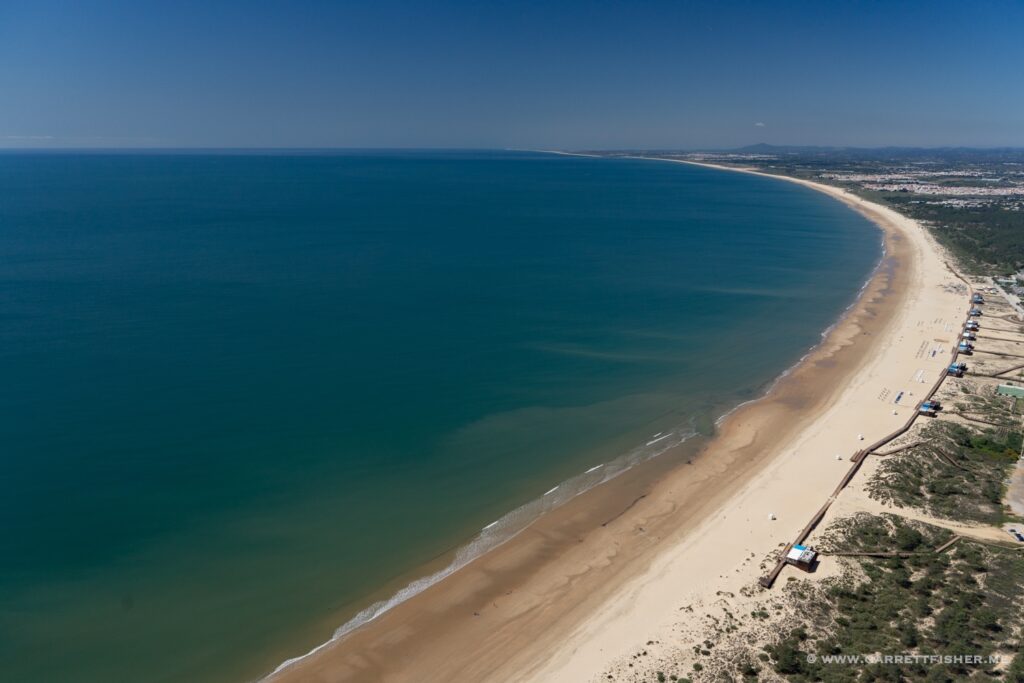 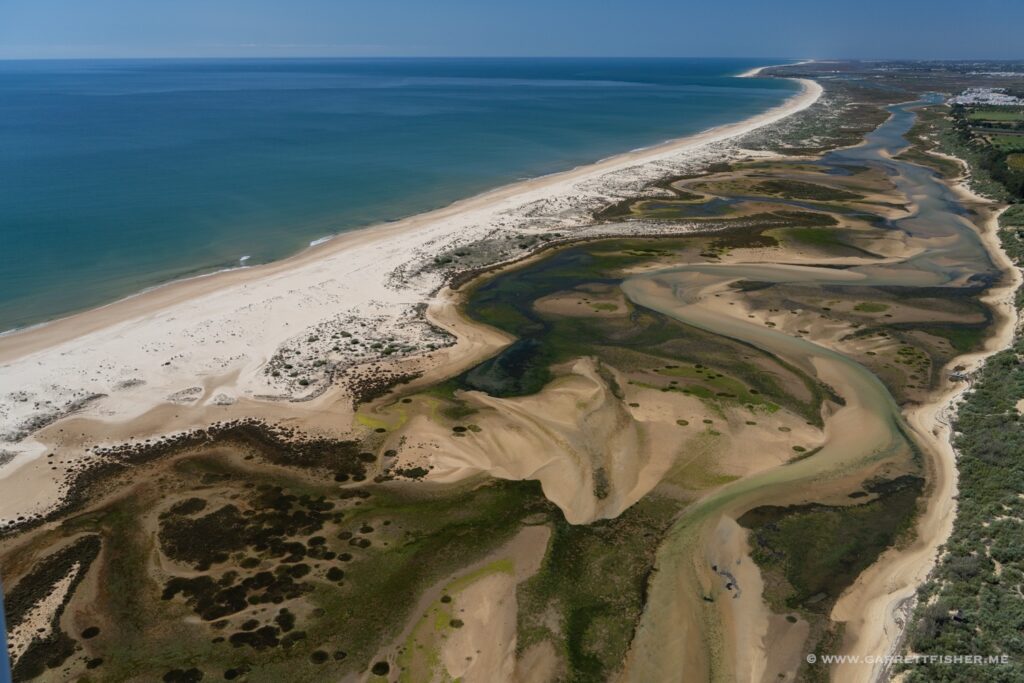 Fuseta. Reminds me of some of the inlets along the Cape Lookout National Seashore in North Carolina. 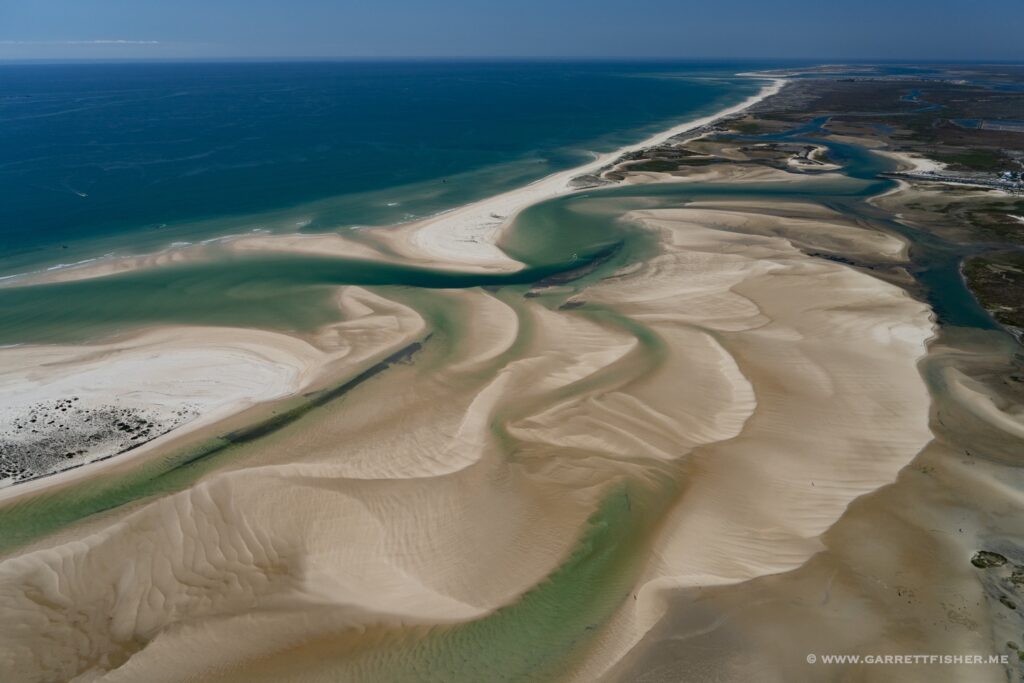 Ilha da Armona. Ie, “hurry up as an airliner is on final.” 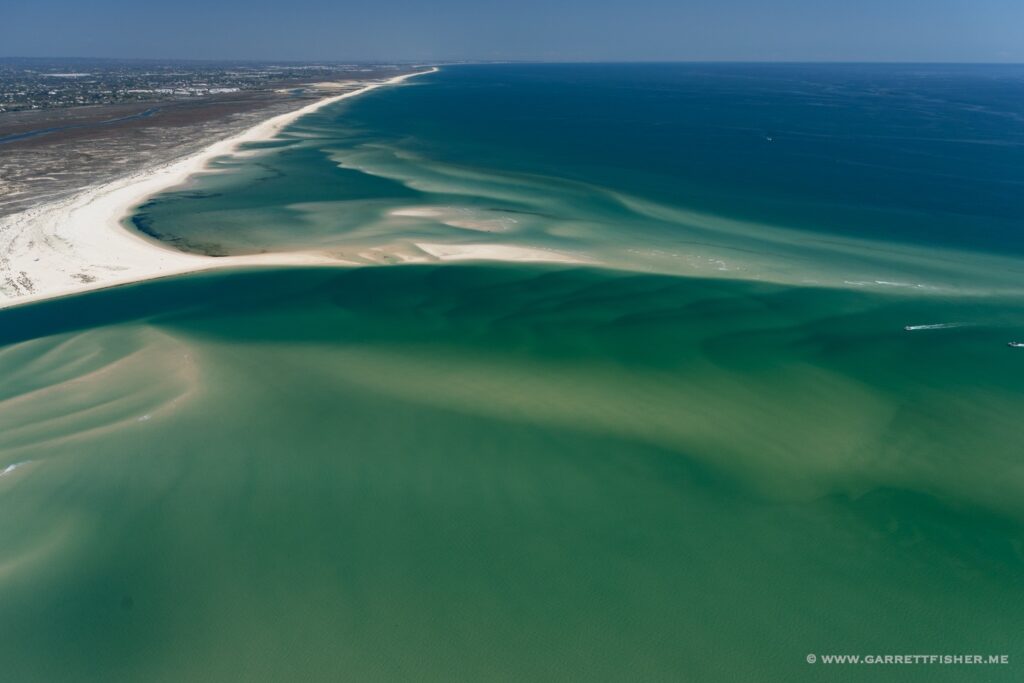 Past Faro, along the coast of the Algarve. I have a friend who has orchard property from his family nearby, acquired decades before all this development took place. He refers to the place as the “al Gharb,” which is the Arabic origin of Algarve, to express his raging disdain at the nonsensical overdevelopment of the coast. There does seem to be a “full speed ahead” approach to touristic development. 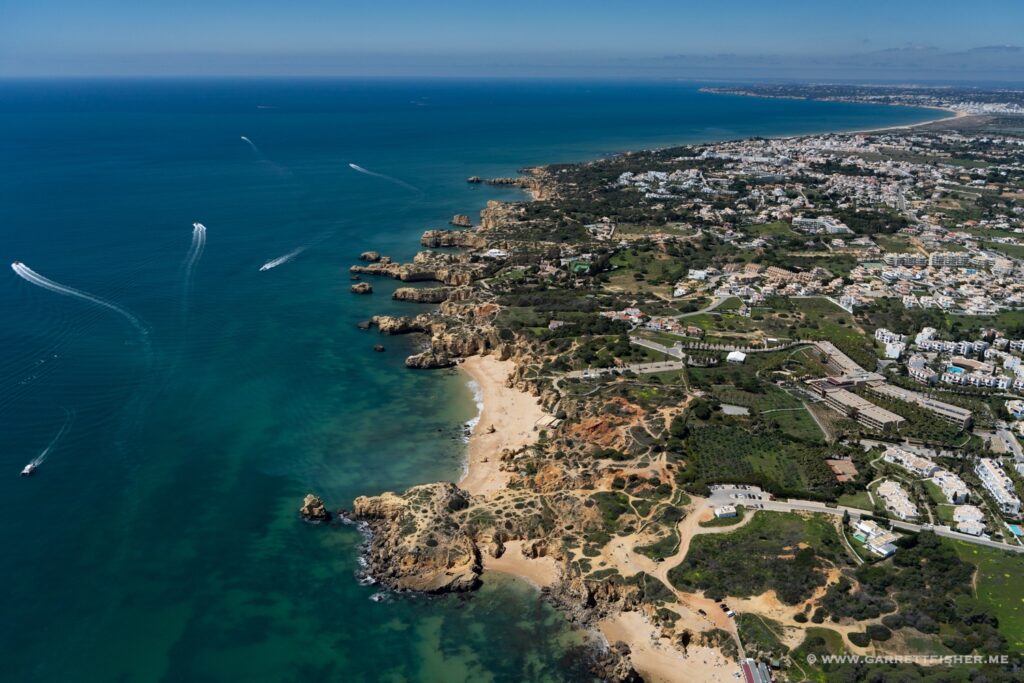 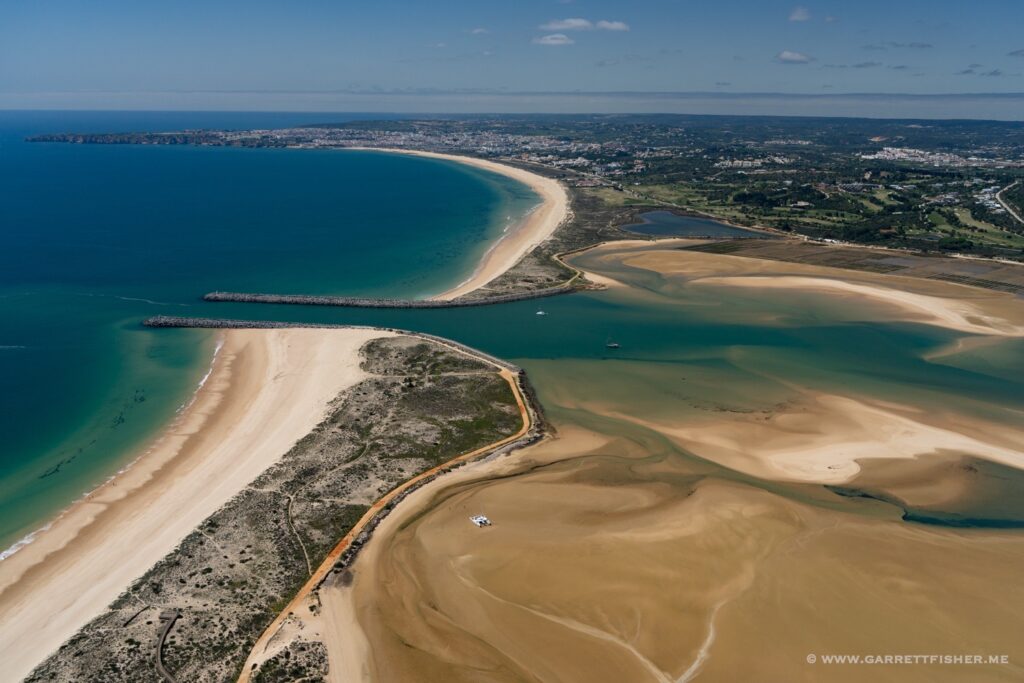 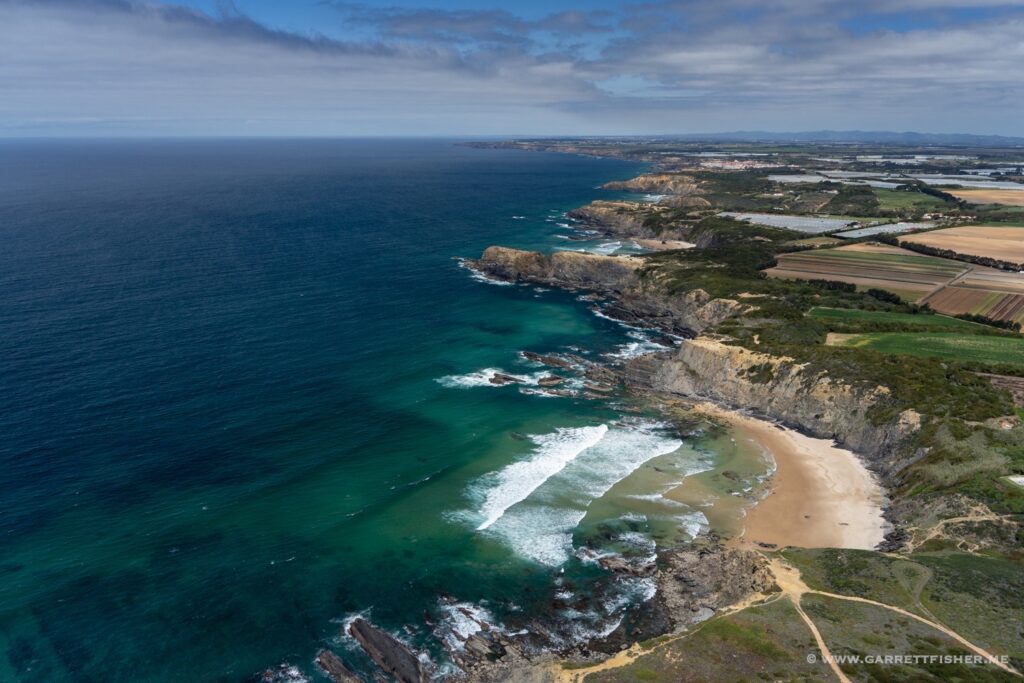 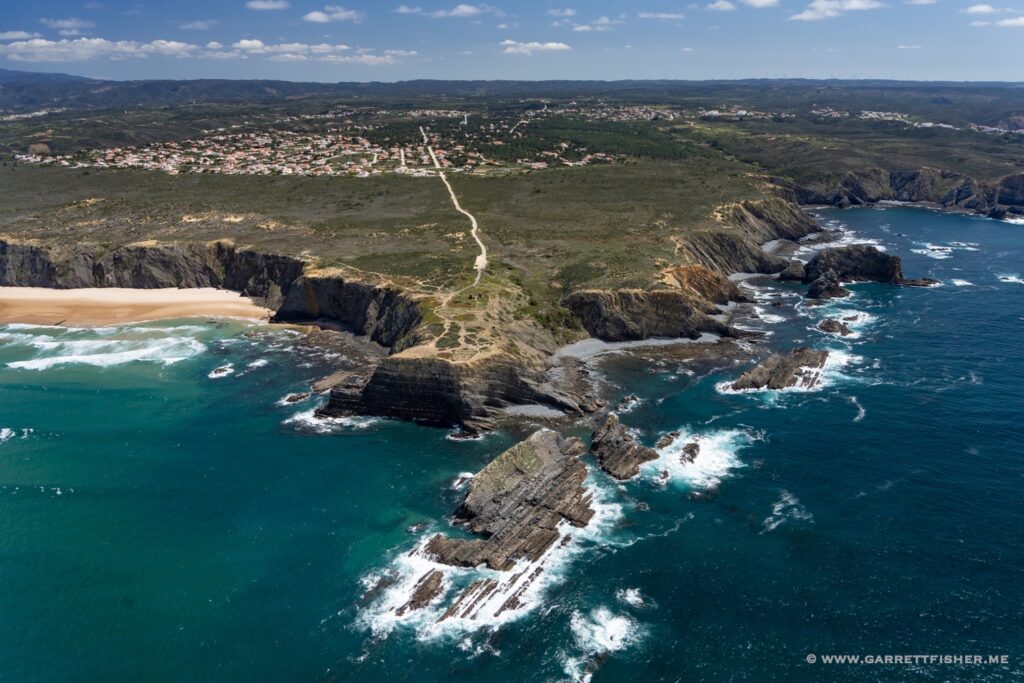 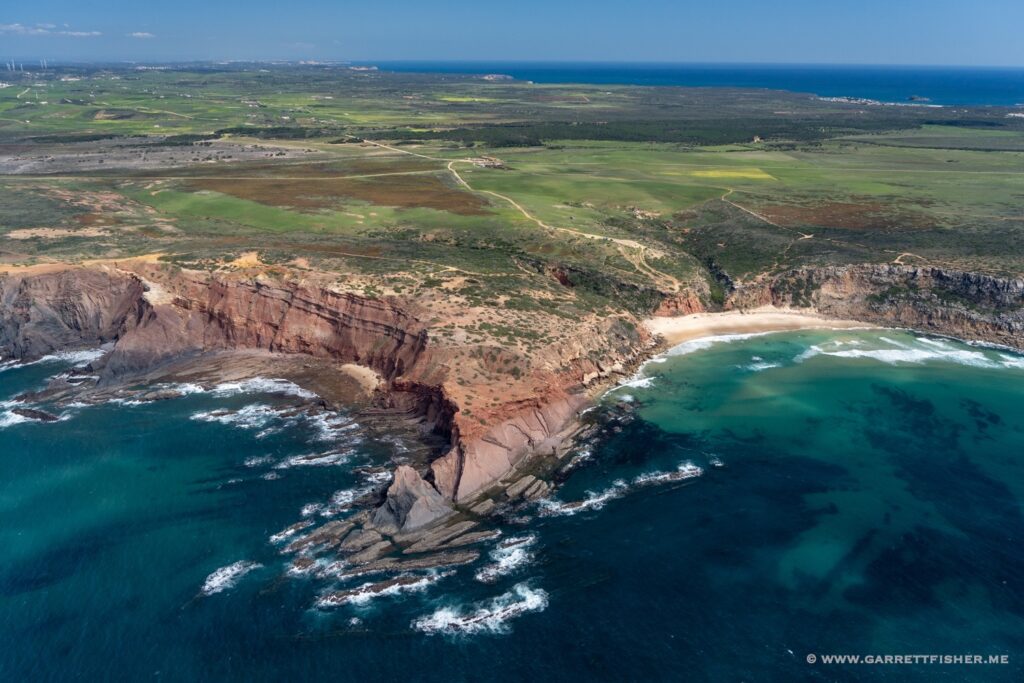 Last Sausage Before America. I have completed my holy pilgrimage. 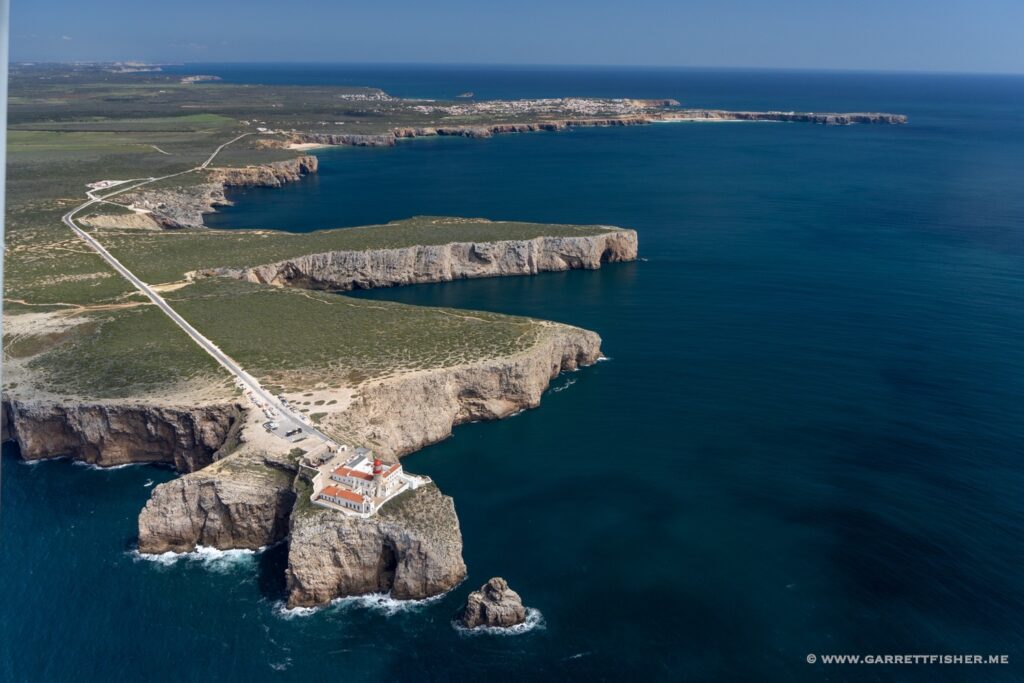 Back in the al Gharb. I stayed in a hotel in the center along the coast last October. It was to preview a Swedish registered Super Cub for sale down here. While there was nothing ostensibly wrong with it, I opted against the purchase. Less than two weeks later, I was in Norway signing paperwork for the aircraft in which I sat to take this photo. Anyhow, I took a quick test ride with the seller over this point, and water colors were majestic, as they were today. 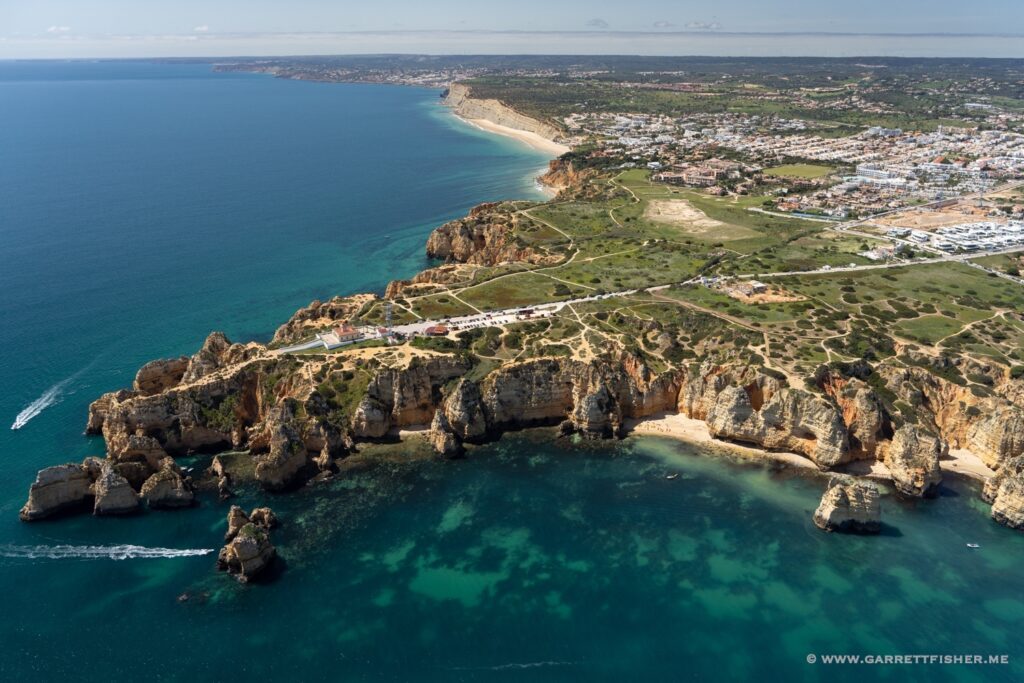 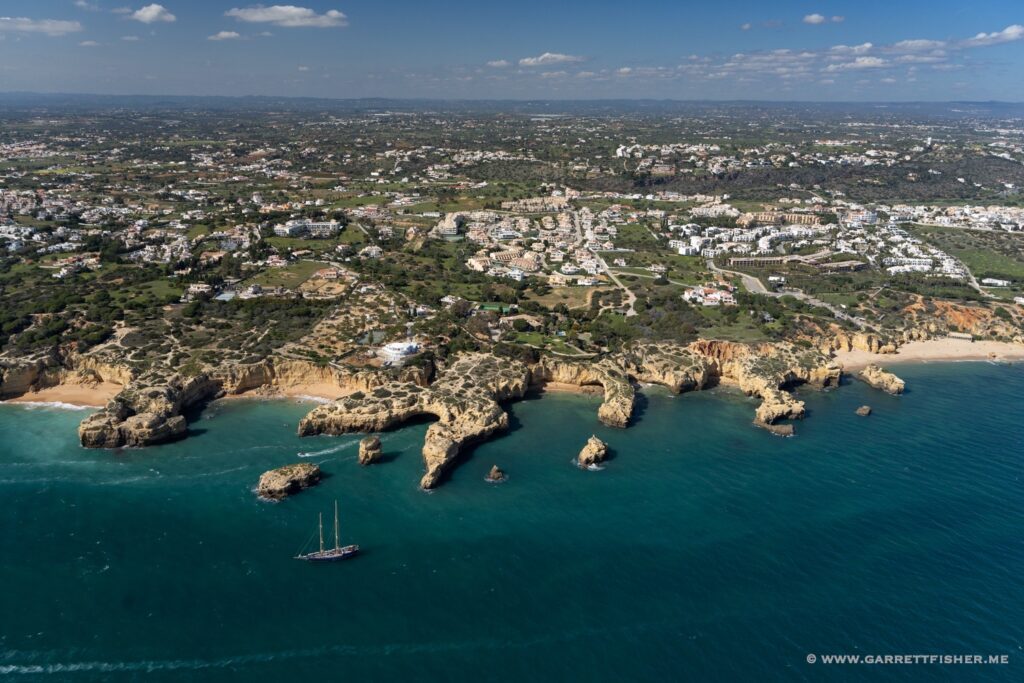 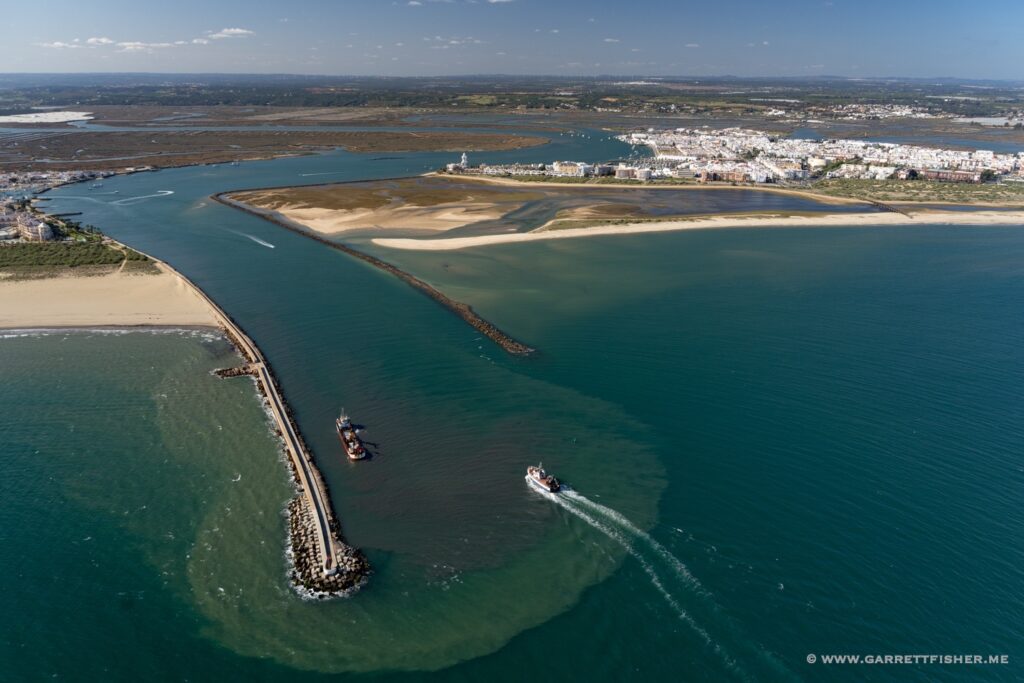 Chipiona, Spain. I am absurdly high due to heading out to sea for the restricted area. 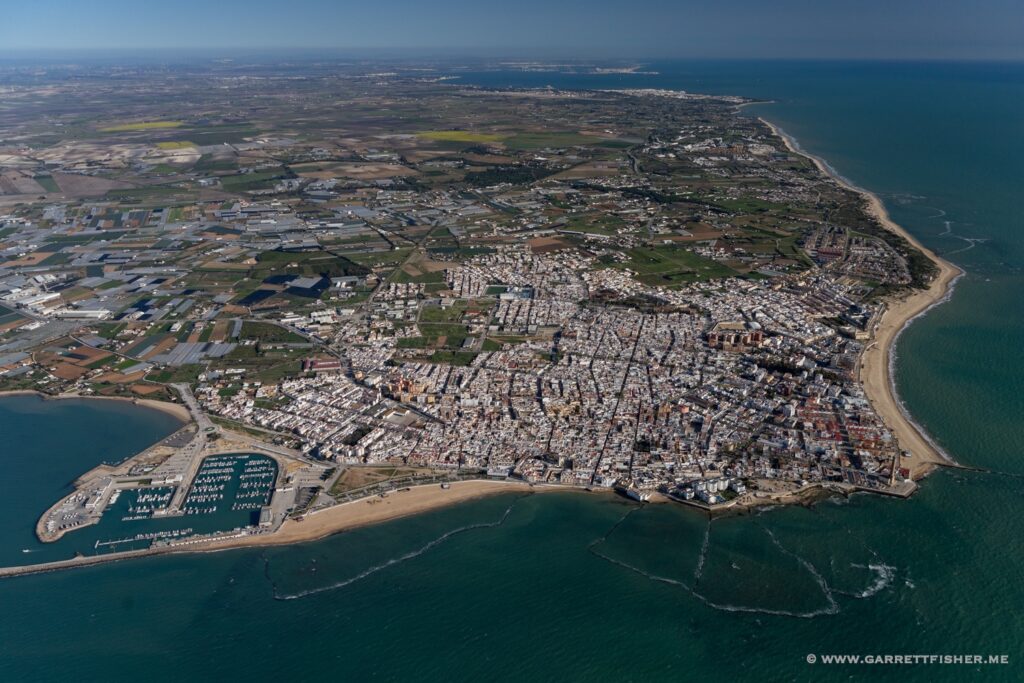 Velvet texture before entering the circuit. 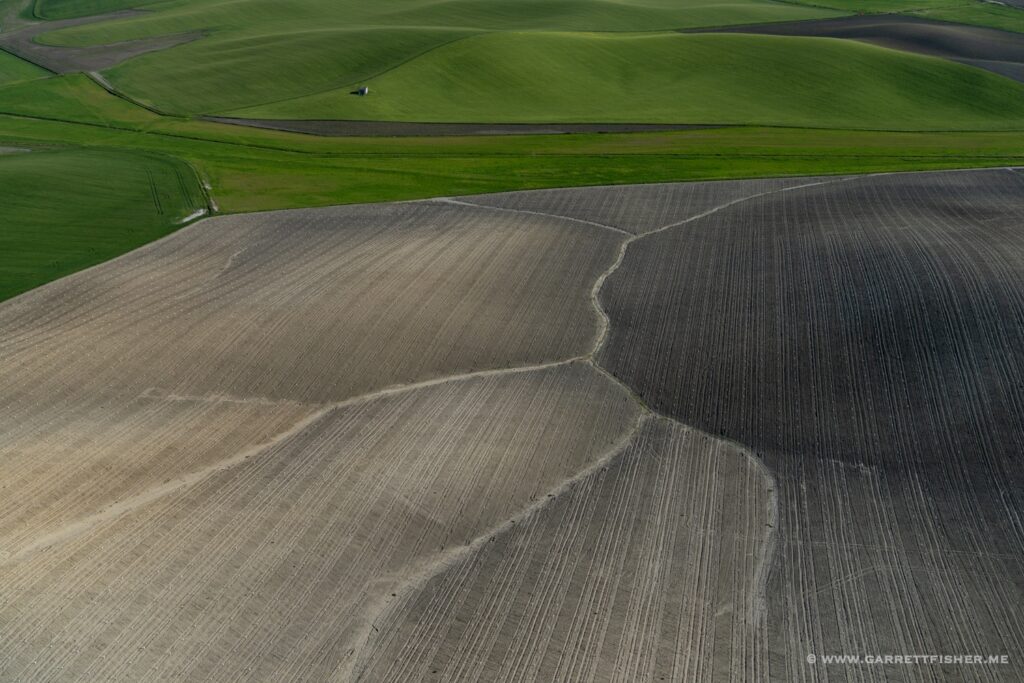