After 2,426 miles of driving (including towing a trailer), we finally made it to Alpine. Requiring four full days, it was more than we bargained for as far as fatigue was concerned. The more we thought about it, the more we realized that our rugged self-reliance (a.k.a. cheapness) is unique, as most of the people we know that have moved across the country hired movers, shipped their cars and animals, and hopped a commercial flight, enduring the burden of sleeping on the floor for a day or so, all the while someone else paid for it.

It’s kind of funny when people hear about our lifestyle. The most common statement is “it must be nice to move around a lot.” Puzzled by their views, it occurred to me that most hear what we have accomplished and assume that someone did it for us. That would be incorrect. Part of making all of these things possible is not paying retail. The other simple fact is that we don’t really like moving around; it has been a function of necessity in certain respects, and more importantly a far-too-long quest to find out where we’d rather be. Dull suburban lifestyle was like a noose around my neck. Extremely rural places are basically a cross between cow manure, meth labs, and trailers (I grew up in said rural area, so I can criticize). Vacation destinations seemed to be a solution, and they are very frustrating and expensive places to live. The best solution, as far as I am concerned, is to find a quiet corner that suits one’s individuality, stake your claim, and never leave. My view all along is that if I am going to work hard to pay for a lifestyle, it damn well better be where I want. There is no sense working for something that is loathsome.

The other funny comments are basically lists of self-imposed restrictions that people place upon themselves and why they want to do what I am doing and can’t. “My family lives here.” “I couldn’t find a job.” “I don’t know anyone.” “We’d have to sell the house.” I learned in my early twenties that the best thing to do is leave problematic family behind, marinating in their point of origin. Jobs? It needs to work for you if you’re going to work for it. Make friends – its easiest when you’re doing what you want. And sell the house – it’s not the American Dream to be indebted to a depreciating portion of a subdivision. I did in 2012. Shed what is not working, and keep what is. It’s a simple formula, except it takes time and determination, and most people would rather eat pizza and watch football while bemoaning their increasing waist size.

Now, on to more exciting things. The flight home! Every day that goes by, I am paying hangar rent in Colorado, and I am not flying. Also every day that goes by, five to ten airplanes go zooming by my window while I work, tempting me with forbidden fruit. I couldn’t take it anymore, a sunny day came up and I was getting the airplane!

Enter in the cheapness equation, and I was sick and tired of spending money and staying in hotels. Thus, I got a rental car on Sunday, left at 4:15AM Monday morning, and drove to Boulder, CO, arriving at 12:30PM. Airborne at 1:30PM, the intention was Alpine, WY by 8PM, official sunset. It would be tight.

I had a passenger with me, a rarity for me. That hosed up my travel assumptions, as getting over Rollins Pass (11,671) in Colorado was a chore with the extra weight. The airplane was battling slight downdrafts, and thermals seemed to be absent. With the aerodynamics and lift of a refrigerator, it took 45 minutes to get enough altitude to get over. Once on the other side, we crawled our way to Steamboat Springs, CO, and made an extra fuel stop. I wanted to get to Rock Springs, WY, except that was not happening after having burnt almost half the tank. There were no other options, except running out of gas, so I committed to two stops, using 45 minutes of my 90-minute buffer.

Central Wyoming was a chore. Desert winds were in full force, bouncing us with a fury as we passed sand dunes that I did not know existed. A storm was coming in the next day, with forecast winds being extremely high, and already the Wind River Range had sizable lenticularis clouds. With the change in fuel stops, we no longer could enter the Star Valley through the lower sections; we’d enter over high terrain to cut distance.

As we flew, I kept smelling what seemed to be some really bad morning breath, wafting in from the back. The thoughts that came to mind were caustic and nasty, and I wanted to say something. The problem is, when I get extremely pissed off about smells and noises, I will decide to be very delicate when I ask about it, and it will come out like an angry Russian commander barking orders. So, I bit my lip and contained a vicious vitriol in my mind. “Drink some water for pete’s sake!” “Moron, he drinks multiple espressos, then an energy drink, and no water, and now this breath!” “Wash!” “Is that body odor? What the hell? Why do I take people, or for that matter, interact with them?” “Really, do you really have to breathe on me?”

We landed in Big Piney, 45 minutes short of Alpine to get fuel. I notice something funny on the side of the airplane. Looking closer, I ask “Is that vomit on my airplane?” “Yes.” “Um, why didn’t you say something?” “Uhhh… and interrupt your photography? I think not.” “How did you pull it off?” “I waited until you opened the door to take a picture, took off the headset, and got it done. I lost my sunglasses doing it.” Thinking a minute, I realized the set of rules I issued before taking the flight: “No puking. No whining. No complaining you have to go to the bathroom. No whining about being cold. No complaining about wind on your face. No boredom. No requests to stop early or divert. No panicking or drama. You’re tagging along for a flight that is pre-determined, and will happen exactly as prescribed despite your presence.” So, he gets to go again for best effort in complying, though I did make him wash the vomit off so as not to alter the chemical nature of my paint. I have a 25 year no vomiting record. I can’t blame myself for having food poisoning as a kid, though I do hold reverse peristalsis liability for eating a five pound bag of M&Ms when I was five. That was no good…

Climbing from Big Piney over the Wyoming Range was slow, and passing overhead, I realized these mountains are super rugged, and the eastern slope gets tons more snow than the western, even though eastern valleys are desert, and western are green. Go figure. Neither of us were worried about an engine out, as terrain was suitable to land, and we both are preparedness junkies with individual sets of matches, a tent, sleeping gear, massive survival kit, food, and water.

Coming over the range, I saw clearly why we moved here. The two pictures at the end speak for themselves. 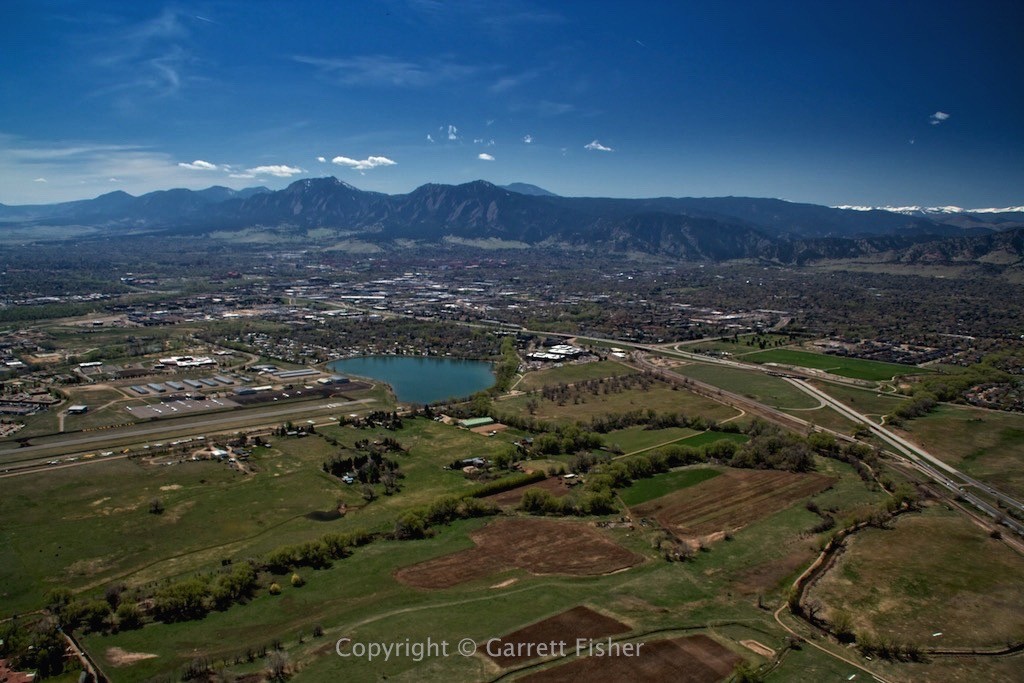 Boulder, CO – From the NW 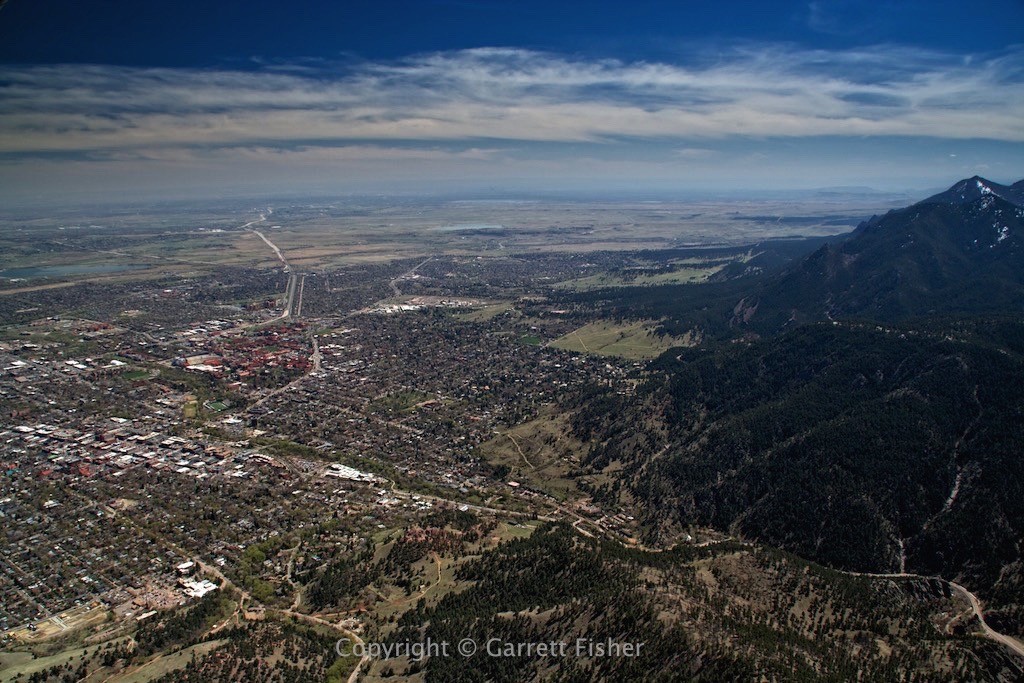 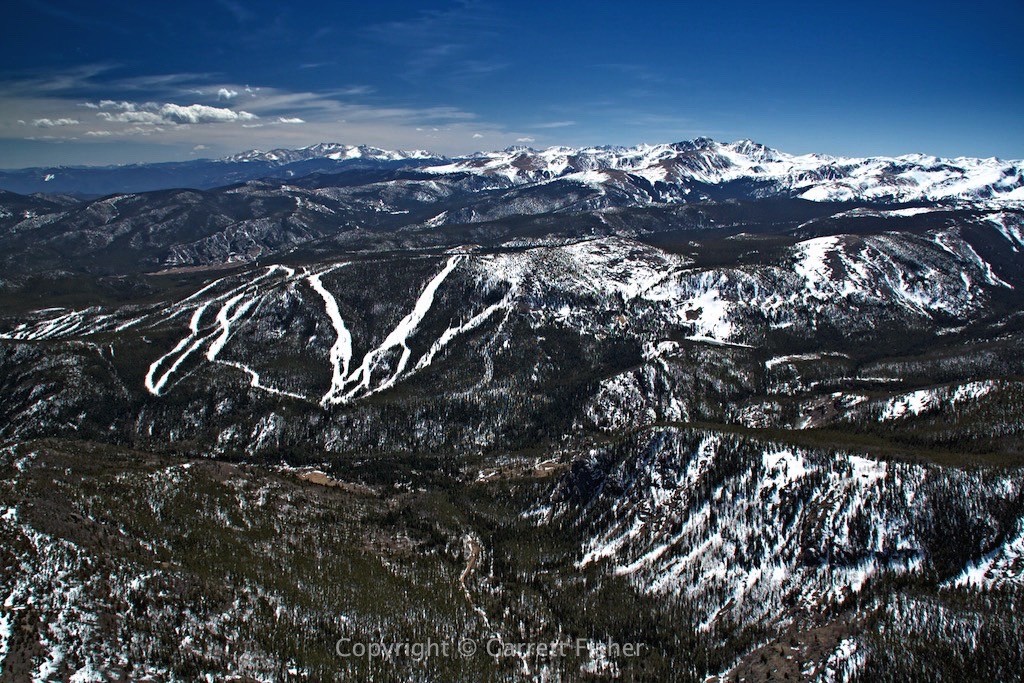 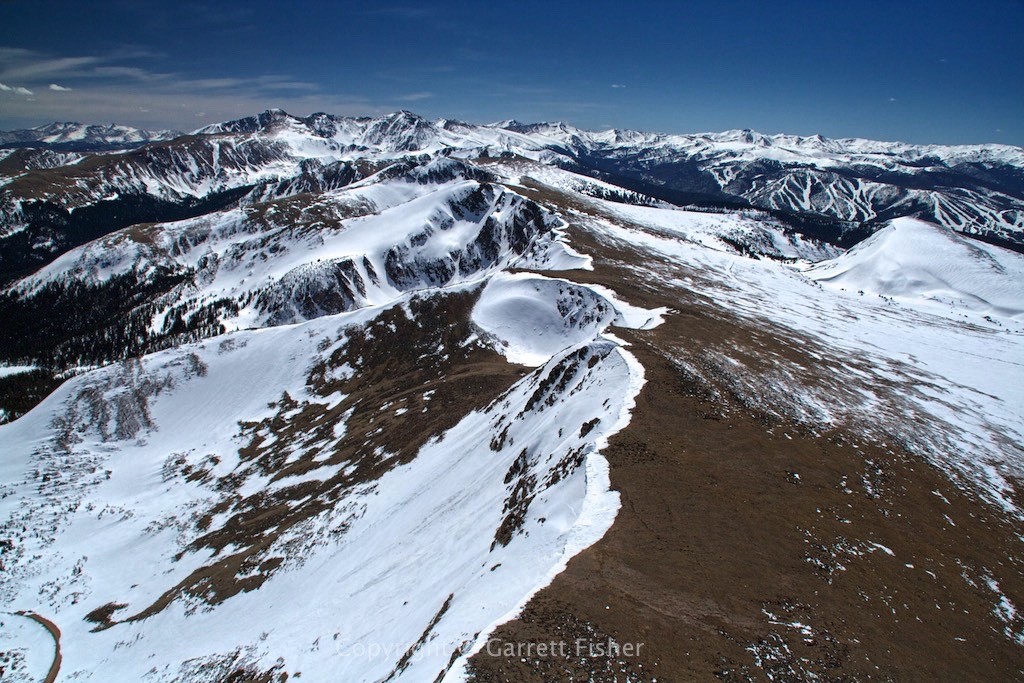 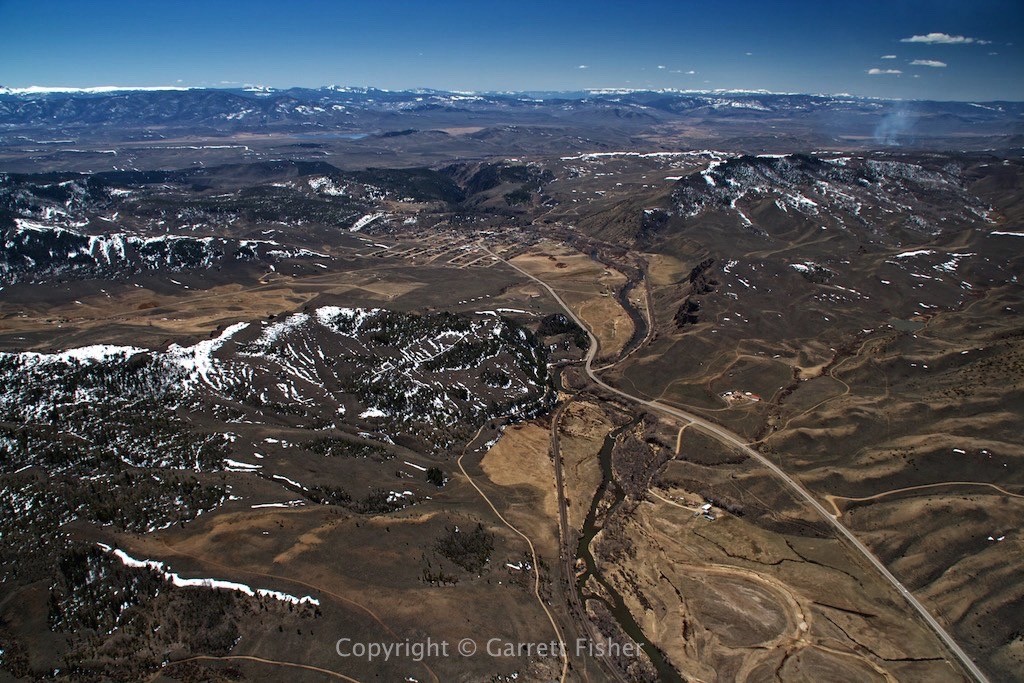 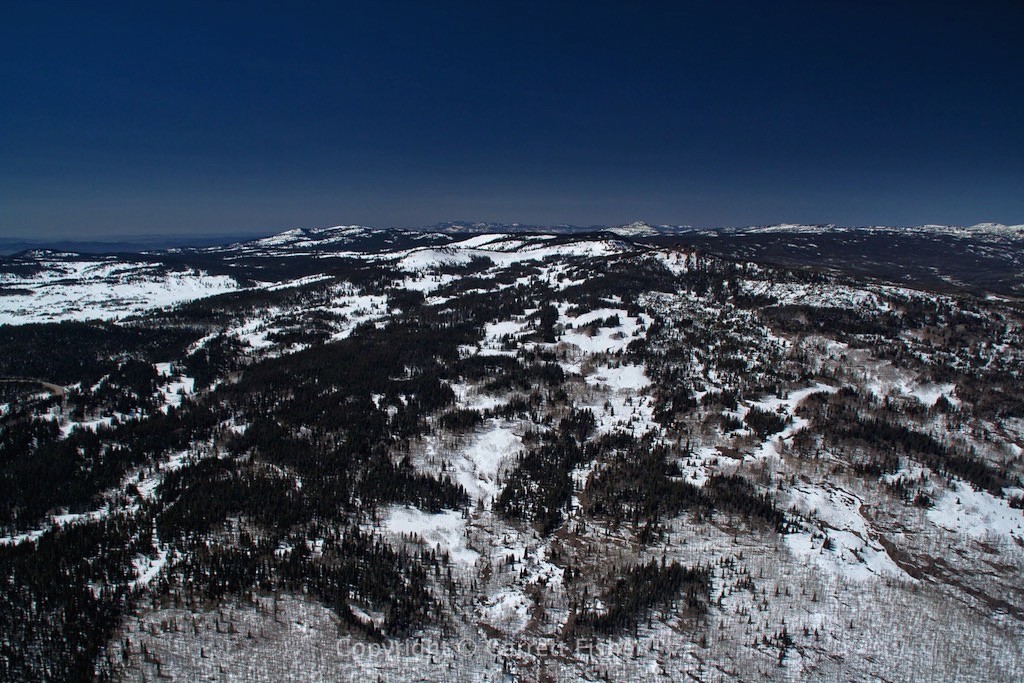 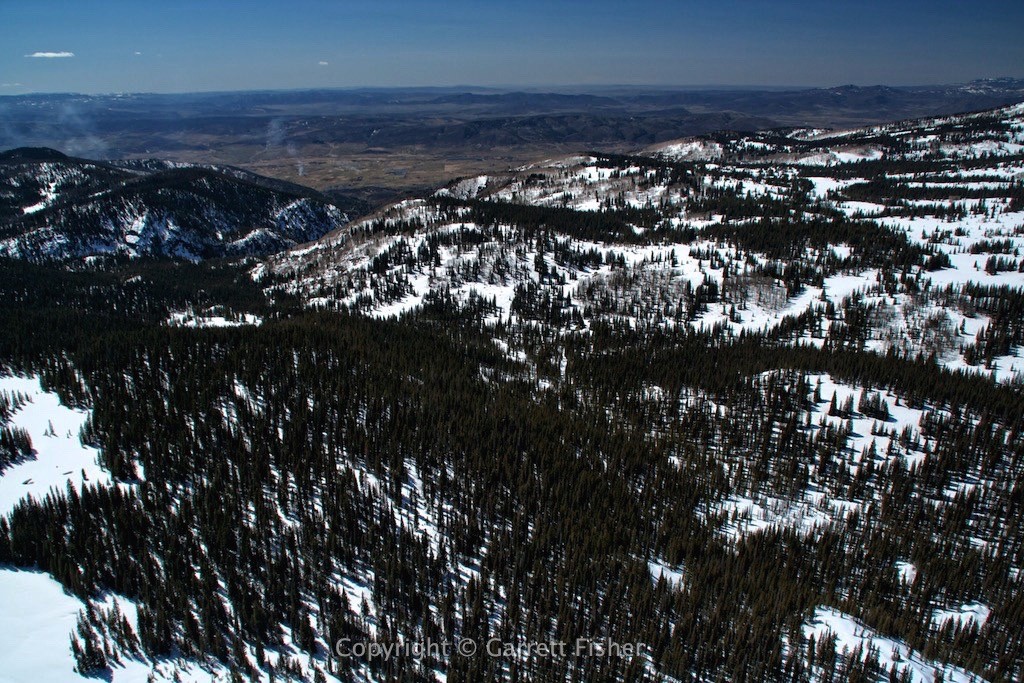 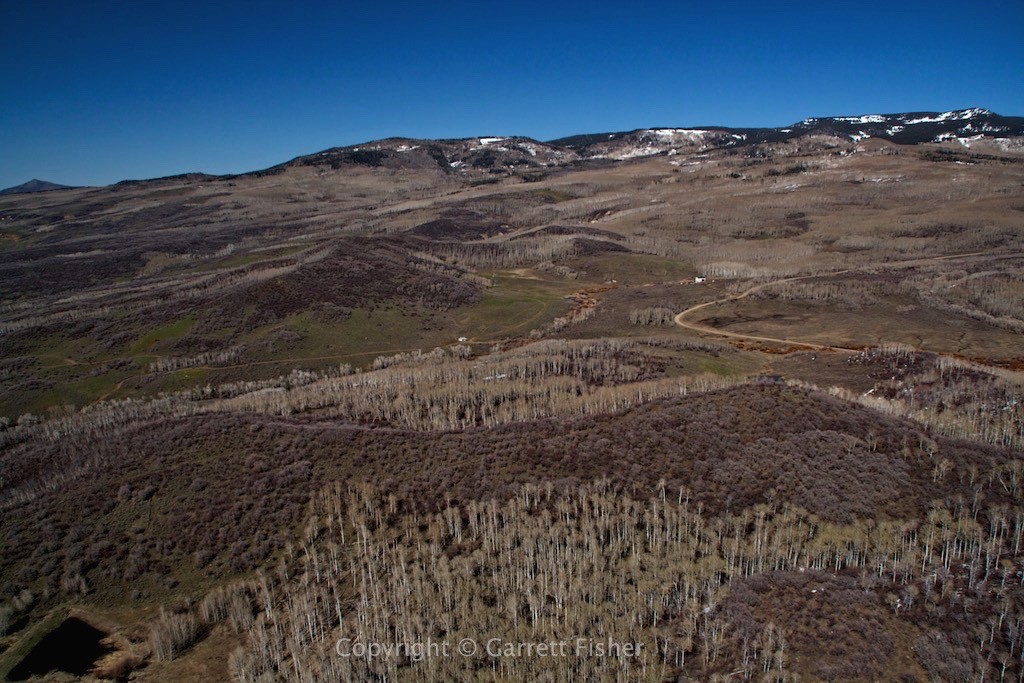 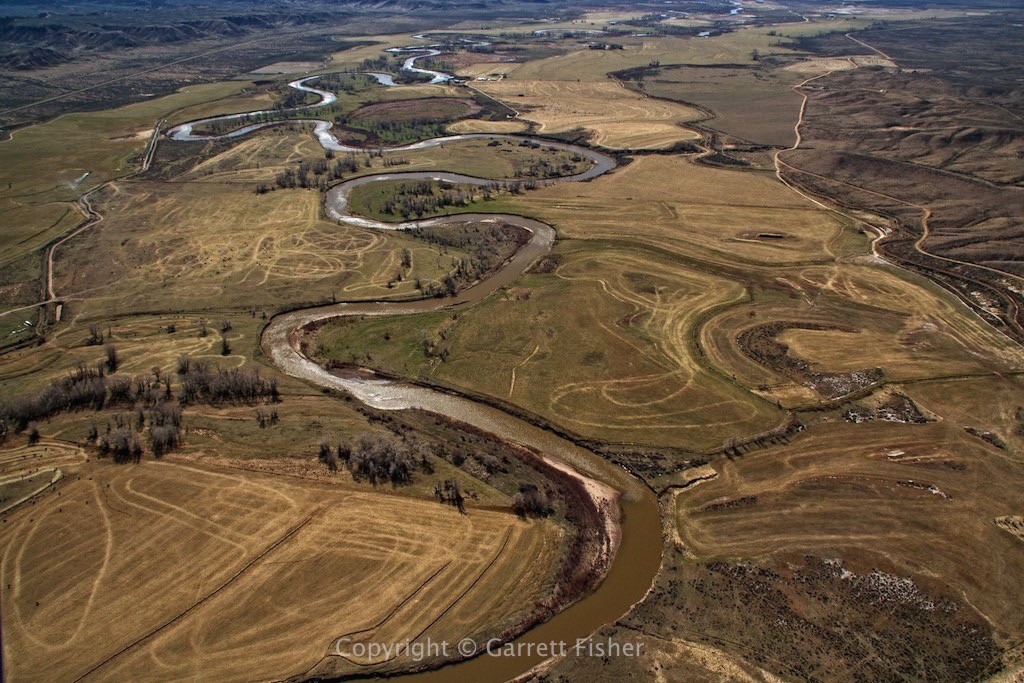 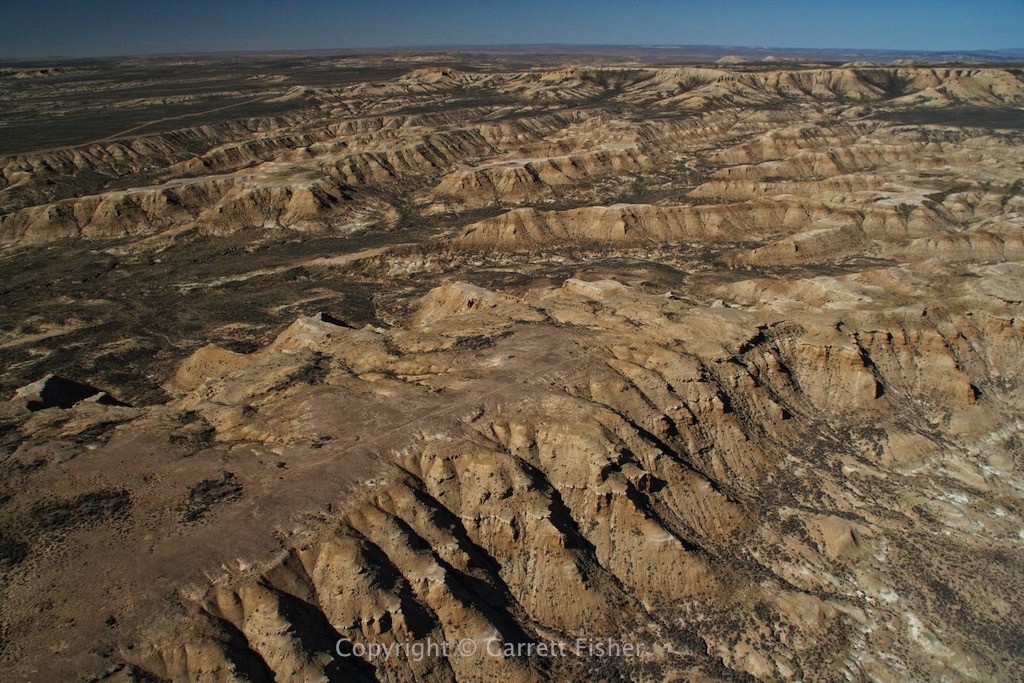 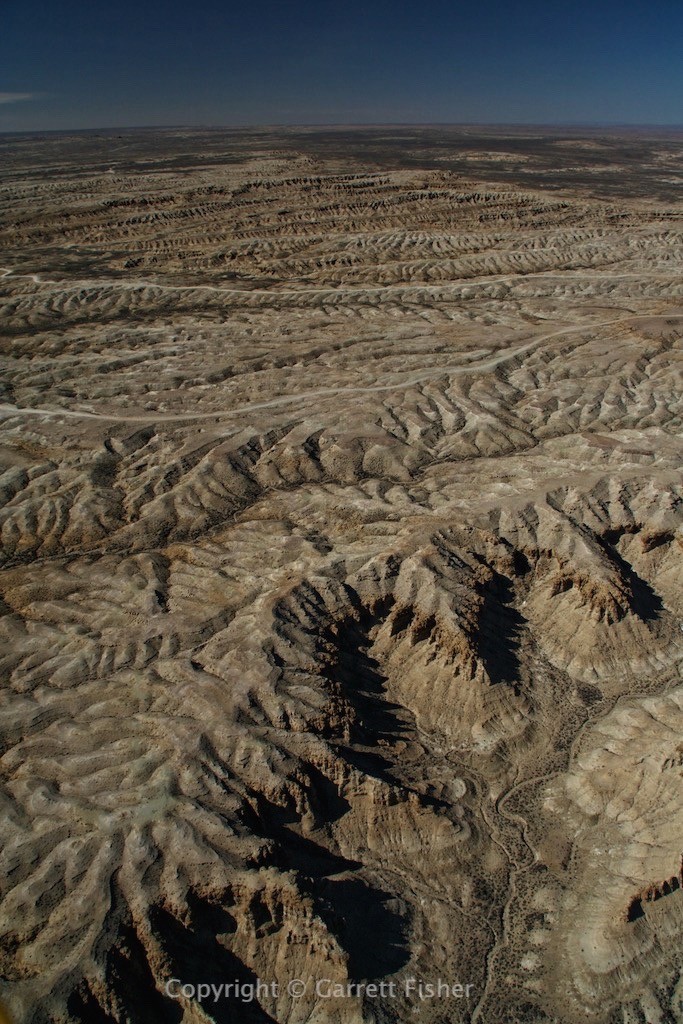 My juvenile side is very happy with this image 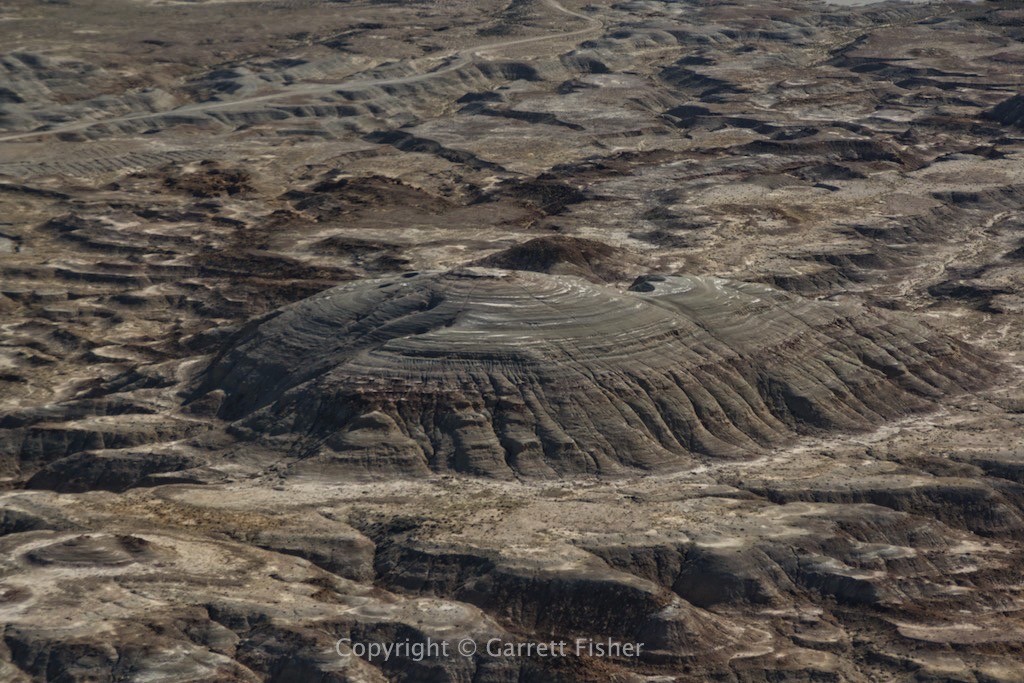 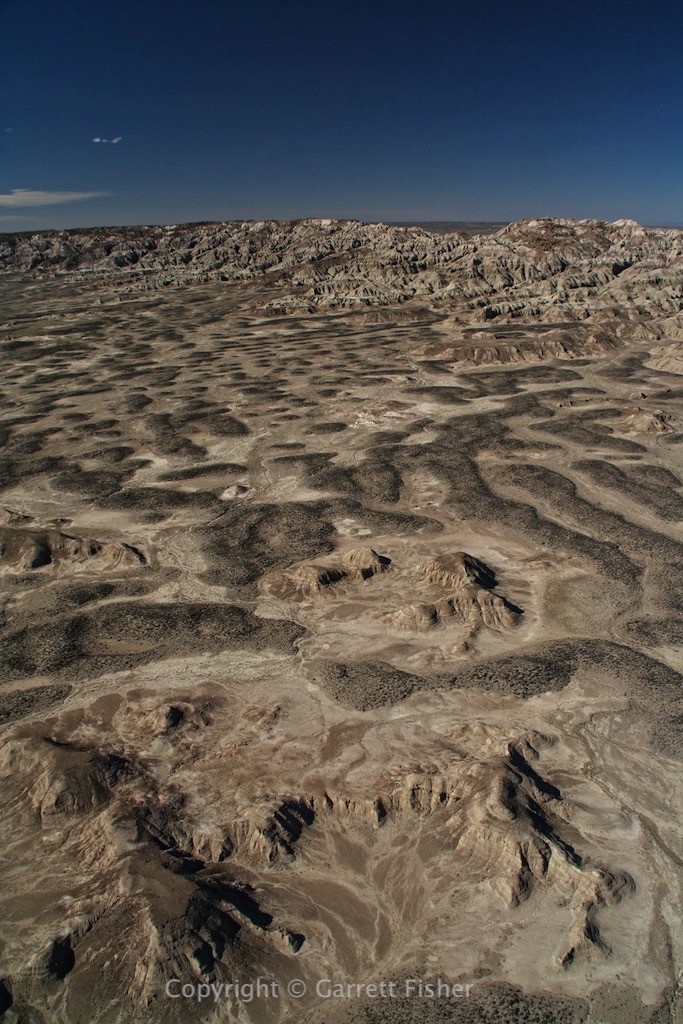 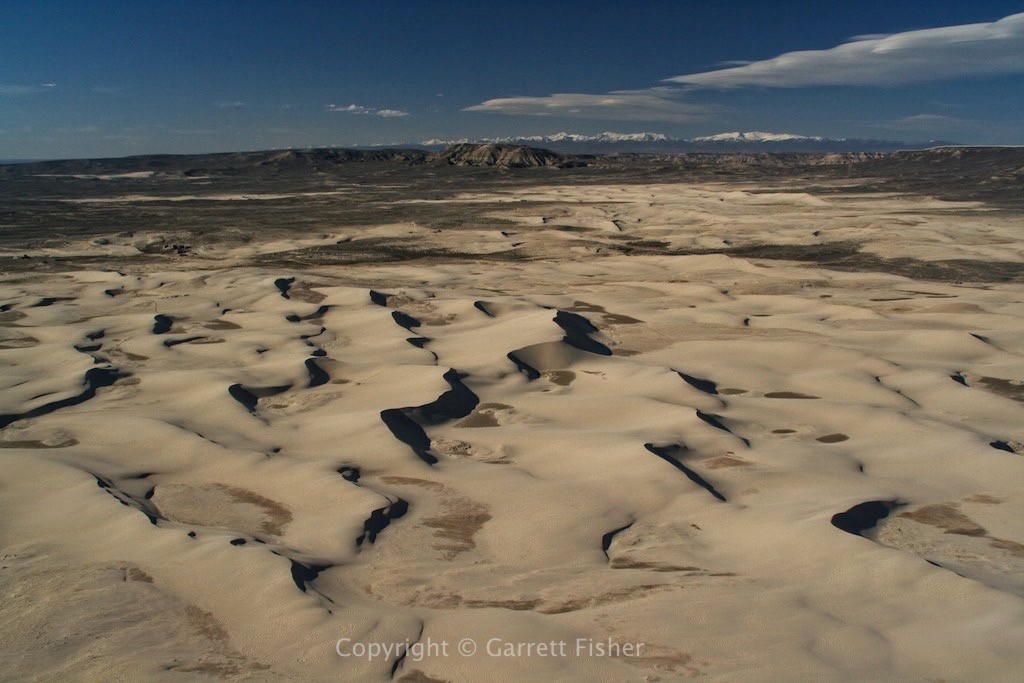 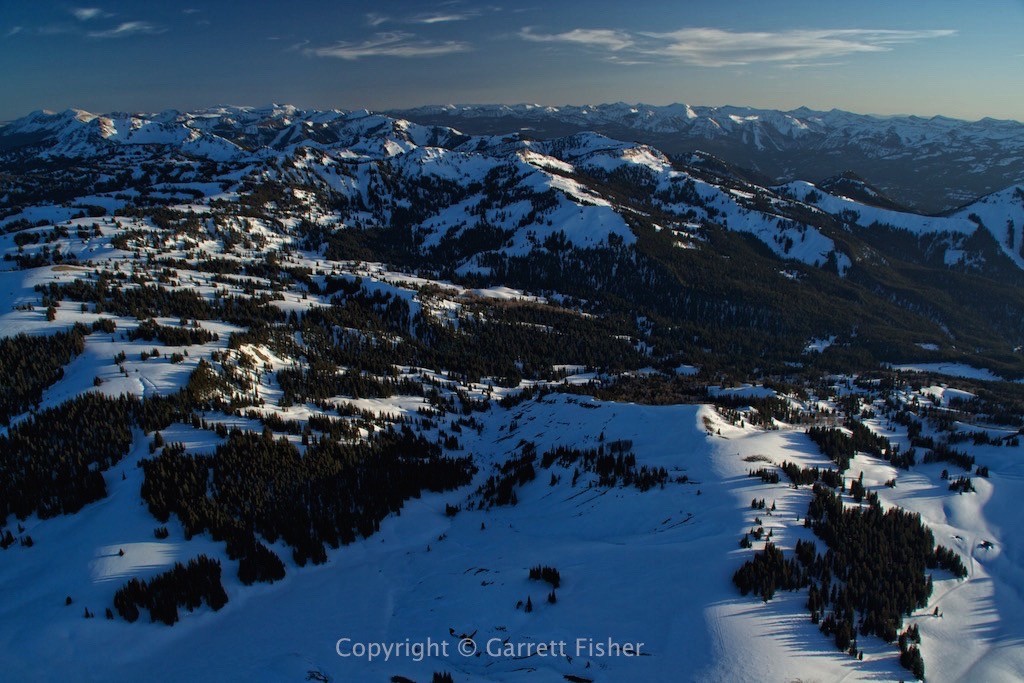 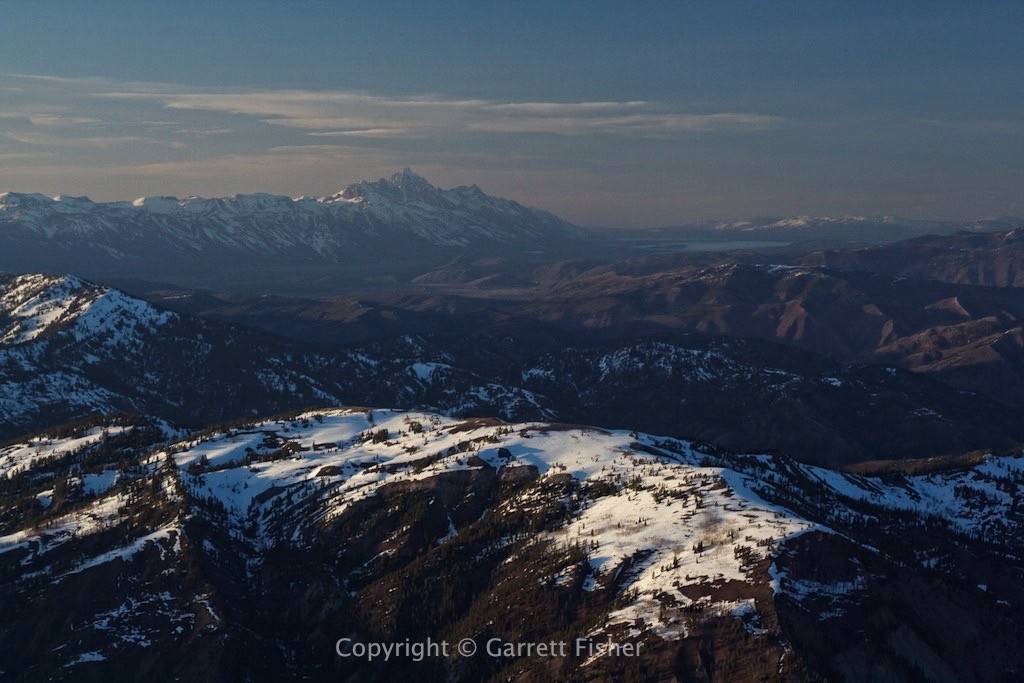 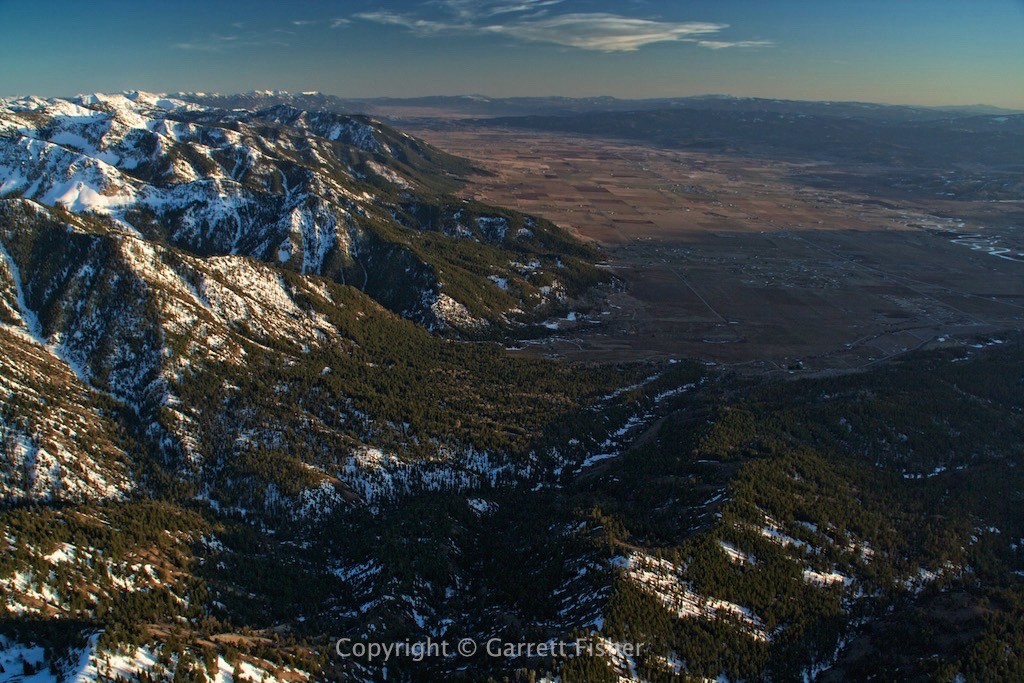 Alpine, WY! – Home is in the flat area to the left of the bridge. Idaho border is near the eastern shore of the lake. 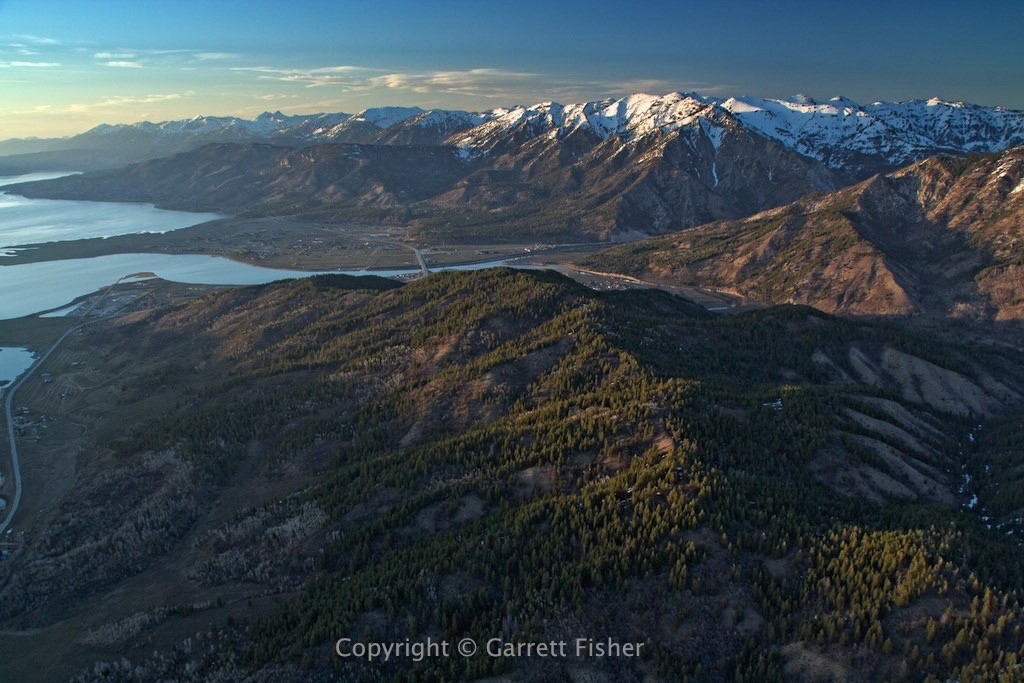