Sometimes life becomes all about making it possible to fly, and not necessarily actually getting into the airplane. As such, I decided to write about my first trip crossing the United States in the Cub back in 2013. The more I think about it, I crossed the USA in the Cub, without a radio or transponder, in 2013, 2014, and 2015, and it looks like I’ll be crossing Europe in 2016. Go figure. I guess I do an annual continental crossing.

That, and I have been updating the fancy pushpins on the front page of the blog (scroll down on the front page to see it). I added one for Europe and have begun to update a year of flying on the USA map. I realized that this trip would add a fantastic compendium of pretty pushpins.

In May of 2013, during a quarter life crisis, I decided to risk all common sense and financial planning to ditch a carefully crafted existence, selling our house and moving to 9,360 feet above sea level in Summit County, Colorado. It would be 1,700 miles from home (leaving North Carolina), somewhere that snows 9 months out of the year, a constant experience of hypoxia, and brutally expensive. What is life for, but to spend savings and make reckless decisions?

As such, we drove in late April across the country, running smack into a blizzard in Denver. I was not staying in a hotel 100 miles from our new home, so we plunged upward into the mountains, stopping for an hour due to a jack-knifed semi trailer while it snowed at an incredible rate. Then we had to swerve around a rockslide. Then another jack-knifed trailer on an ice-covered road, requiring 4×4 just to move forward with a heavy trailer. To top it all off, we sat for 4 hours at 11,163 feet, at the highest point in the United States interstate system, due to an accident in the Eisenhower Tunnel. On the way down, my wife’s car got a flat tire. We hurried up and added air at a gas station and drove to our new home, arriving on May 1st to 18 inches of fresh snow (half a meter)!

You can probably tell my determination and planning at this moment, and imagine how that goes with the airplane. I honestly didn’t think it through at all, knowing solely that I would bring it in summer and figure things out then. I was not in the mood to cross the country during tornado season. Finally, I bought a plane ticket in June for July 4th arrival in Charlotte.

There is nothing like choosing a date with no ability to plan the weather in advance.

Upon arrival, there were thunderstorms everywhere in Charlotte, which is normal. To make matters worse, the airfield where I had been storing the plane, which is a private grass strip, had been flooded. It was “closed,” which is doublespeak for the fact that the guy running it was a jerk. After having crossed the country to get the plane, I wasn’t going to wait two weeks until it opened. As such, I fired up the plane and snuck out of there at dinnertime to move the airplane to a public field near the friend’s house where I was staying the night.

Thankfully, the tires are big, as it was quite wet. Skirting a thunderstorm, it took only 10 minutes before I got a ragingly angry email from the manager of the field, demanding a $100 “unauthorized runway use fee,” despite the fact that the big tires didn’t damage the field, just his ego. Needless to say, that fee did not get paid.

The entire southeastern US was wet, very wet. There was a stationary front bringing in tons of rain from the Gulf of Mexico into Alabama and covering the entire Ohio Valley. If there was going to be a gap, it would be in the Deep South.

Setting my alarm for 4:30AM, I woke up and saw ceilings at 400 feet per automated sensors. Excellent! It should rise to 500 by daybreak, and I’ll be off before the thunderstorms get any angrier in the Deep South. As expected, the entirety of the Appalachians were fogged in.

I wouldn’t take off until 9:30AM. The ceilings sat, and sat, and sat. I even took off as things looked clear. Nope. Socked in on all quadrants. Land back at the field and wait another hour.

Finally, the ceilings lifted, and I was off. Ceilings were low though growing all the way from NC, past Spartanburg, SC, then Greenville, SC, then into northeast Georgia. I made a fuel stop in the blazing southern sun and continued to the southwest, skirting the Atlanta metro area to the north. Radar returns were not promising, though I thought I’d give it a whirl to penetrate the line into Alabama. It was a nearly continuous line of showers and thunderstorms, with gaps, and thin in areas. If I could just make it west in a gap, I was scot-free and the Great Plains would await by evening.

Approaching the line, it was total IFR, so I turned south. I then ran into heavy rain showers, the kind of a nearly tropical variety. Sunny one minute, absolute deluge the next. Dodging left and right, head glued to radar coming in on the iPad, I made a go for the line again, and it was stratus clouds down to the ground. It was time to head back east to West Georgia Regional Airport and get another briefing. Dodging more deluging storms, I flew through some heavy rain and minimal Class G visibilities, the skies opening for final approach and landing, just in time before the next black menace came roaring in.

I would sit all day waiting for that line to clear. Two pilots came in to land, both in IFR equipped aircraft, on IFR flight plans. One had electrical failure in IMC, the other, in his glass panel new Cessna 182, got sick of the severe turbulence. We all over and over kept watching radar, and the rain just poured with a fury. We all eventually took the courtesy car to a nearby hotel and packed it in for the night.

This is the second time the Cub and me waited out weather with the IFR guys. Another time on the coast of Georgia, I flew in 2-mile visibility and 500 foot ceilings, making my way from Charlotte, NC to Jacksonville, FL in Class G airspace, running along the Atlantic Coast the entire way. Stopping for fuel on the coast of South Carolina, I ran across an IFR aircraft that had been waiting two days. “You came in here in a taildragger?” “Um, yeah. Haven’t you heard of Class G? What the hell are you guys sitting on the ground for?” “Hey Billy! This crazy guy came in a taildragger!” They departed 20 minutes later. Hopefully, I did not inspire them to fly to their death. Nonetheless, this seems to be a recurring theme. If my Cub can’t do it, neither can your King Air.

Frog on my airplane. So that’s whose been using it for three months. 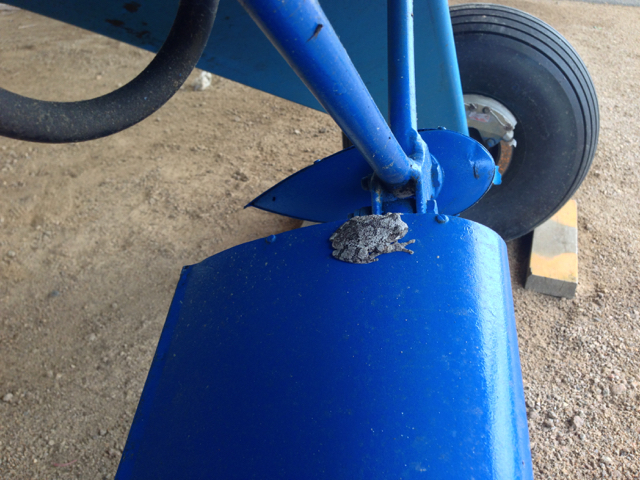 The Rainbow is a nice touch. Upstate South Carolina. 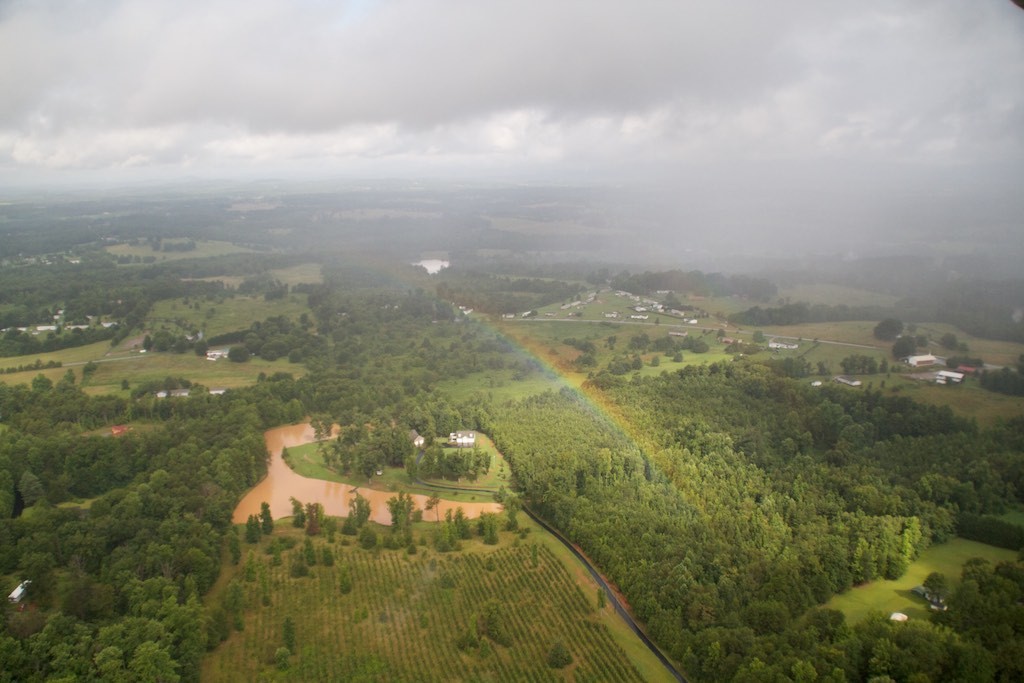 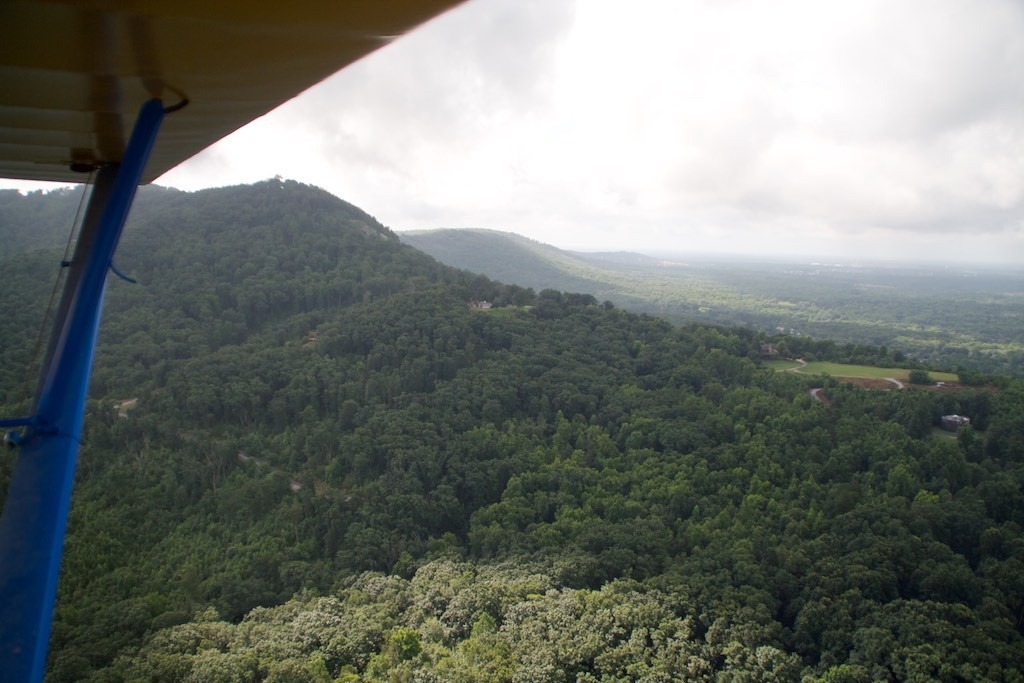 Lake in Upstate SC. I am amazed how few photos I took. Then again, I wasn’t a blogger or author then.

Staring at it rain in Georgia. 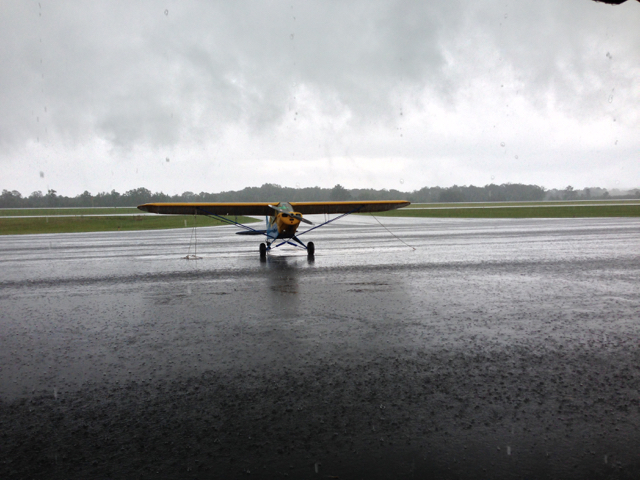