The “Chronicles” have been a long running analysis of two concepts seemingly in opposition to each other: illusions of modern-day travel compared to my European wanderings in the Cub. In retrospect, I started writing from the farthest points possible between the two, and these viewpoints have been narrowing. It is not to say that one is the other, though it is a methodical analysis of the two that has removed elements of apparent conflict. At this juncture, it is time to consider something that both have in common.

I am proposing that a scale in life exists: wonderment vs structure. To have more of one means less of another, to a point where one could, in theory, have complete amounts of one, lacking entirely in another. I will elaborate more, though suffice it to say that I think my wanderings along with those of the traveling public both sit on this scale, with both looking for an ideal equilibrium point. My contentions of stereotype as applied to Cub wanderings has to do with misinterpretations of where on the scale certain things lie.

“Wonderment” is a funny word. I use it to describe that elevating feeling walking the streets of Venice for the first time, that sense of magic hopping onto a commercial flight, that glazed look of bliss a tourist has sitting in traffic in London, alongside Londoners who are fantasizing about being on holiday in Greece (anywhere but the doldrums of London). Wonderment is a state of mind, not a state of location. It is a constantly changing point, like balancing on a ball, where one must remain in a relative state of motion to remain in the state of wonderment. Not too long after we find something that stokes our need for inspiration, excitement, freedom, or awe (aka “wonderment”), we adjust to it and begin looking for it again. Travel is a natural activity to seemingly contain wonderment in a delightful box; just travel somewhere and the feeling awaits…or so it seems.

Quite obviously, there is wonderment to be had wandering around in an antique airplane. That is what lies in common with a typical travel activity, to the extent the feelings remain the same.

Why call it “wonderment,” though? Why not use “freedom?” I think freedom is a tool; it is not a destination. Freedom in and of itself is the state of lack of restrictions, enabling the ability to pursue one’s desires. Wonderment implies that a person has used their freedom to engage in an activity that, for the moment, has achieved the moment of mental stimulation someone was looking for. Freedom could be used scratching one’s arse on the couch equally as it could be used to fly an airplane or wander Venice.

The problem is, we seem to need a certain amount of structure in life. At its core, economics tends to group around predictability; jobs are usually in one location. It’s cheaper to own or rent a consistent residence, for which it is easier to attend college, send the kids to school, visit family, enjoy friends, go to the doctor, and do everything else in life in a known construct, revolving around the structures of need. Since most of the world holds a steady job, wonderment is a small portion of life; therefore, what international travel can be had is like a brief orgasm, a complete explosion of over-the-top enjoyment of new things, before the dominatrix of structure rears her head, demanding of its subjects wonderment chastity.

I tend to find that those with more structure look at anyone on the scale with more wonderment as though he or she is living in pure bliss. While some freedom from structure may exist, the emotional perspective looking over the fence is somewhat of an illusion. Once there, a person naturally finds the next fence to be restrictive, and gazes longingly at what lies over the next fence.

The problem is, I have talked to those who have near complete wonderment, the point in life where no more fences exist to gaze over. It is usually a life of having the weeds as a restroom, sand fleas as compatriots, and a skanky surfer van as one’s primary abode. Further, most who do complete binges of free living (say, digital nomads) tend to do so in punctuated bursts, normalizing into a more, but not completely, structured existence. It is not to say that Middle America is desirable; it is to say that some point between absolute wonderment and absolute structure is.

Therein lies the mystery of the human condition. Once blowing past a person’s personal ideal point of equilibrium on the scale, settling back to an ideal point, the question of life is not answered. The mechanics of travel and wandering may be decided, though the answer to the journey is by no means over. I think a large part of my view has been that those undertaking traditional travel, bound voluntarily or involuntarily by an excess of structure, look to someone with more wonderment in life, thinking that the person has found Nirvana. My teeth begin to itch in that said ascribed viewpoint is lacking adequate insight for the purveyor of it to move to a more desirable point on the scale.

Ironically, my thesis was going to be different, and the evolution of this writing led elsewhere. Even when someone reaches the Nirvana of equilibrium vis-à-vis wonderment versus structure, it is merely yet another tool, like freedom. Wonderment is a continuous state of philosophical stimulation, though it cannot remain a fixed point in time or space, or its effect will dwindle. A person is incumbent to use existing tools available to maintain standing on the ball, in continuous pursuit of the state of thinking. To have arranged life to make that more possible does not alleviate the requirement to continue to chase a state of wonderment. Merely having removed structural impediments without simultaneously fostering the existence of wonderment would result in a relatively freedom-filled existence….sitting on the couch scratching the proverbial arse.

Scientifically, that is a chemical reduction of our existence. Our brains seek dopamine while simultaneously adapting to an excess of it, requiring us to continue working to seek an ideal squirt of hormonal bliss, often derived of exploratory and philosophical wanderings, while being unable to continue doing so lest we get calloused to it. Where does it lead? Probably a lifetime of travel. 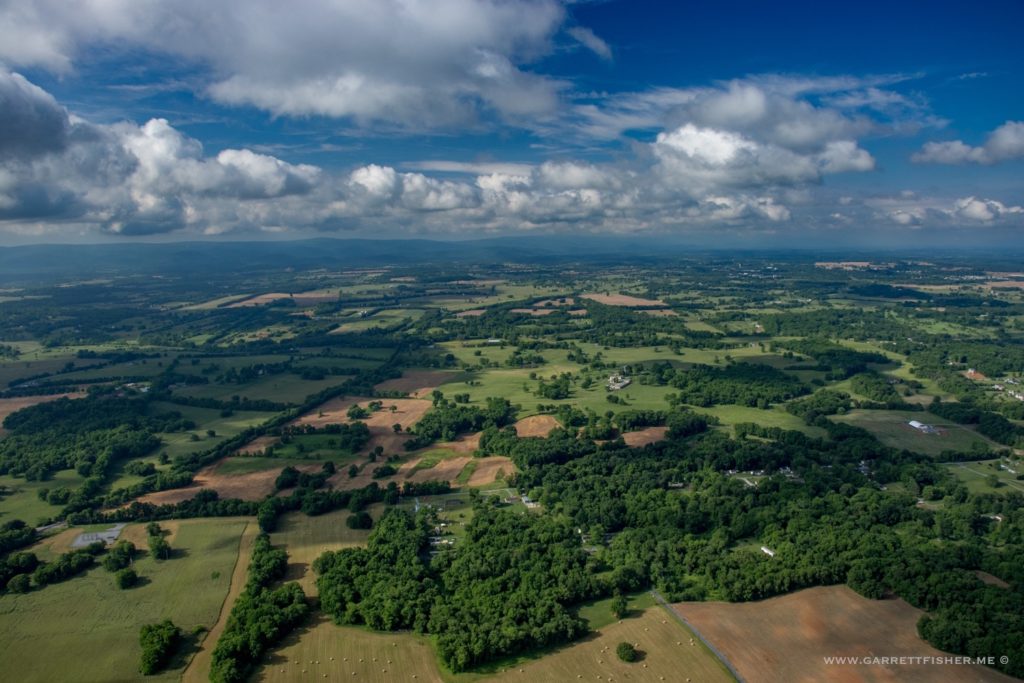 It is horse country in the Shenandoah Valley. 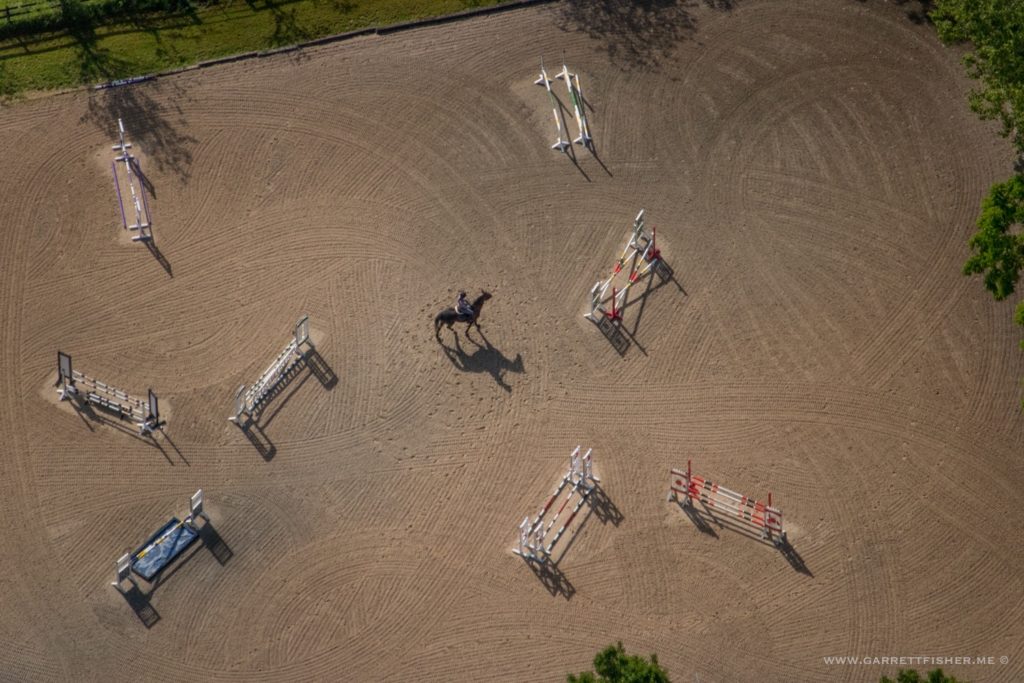 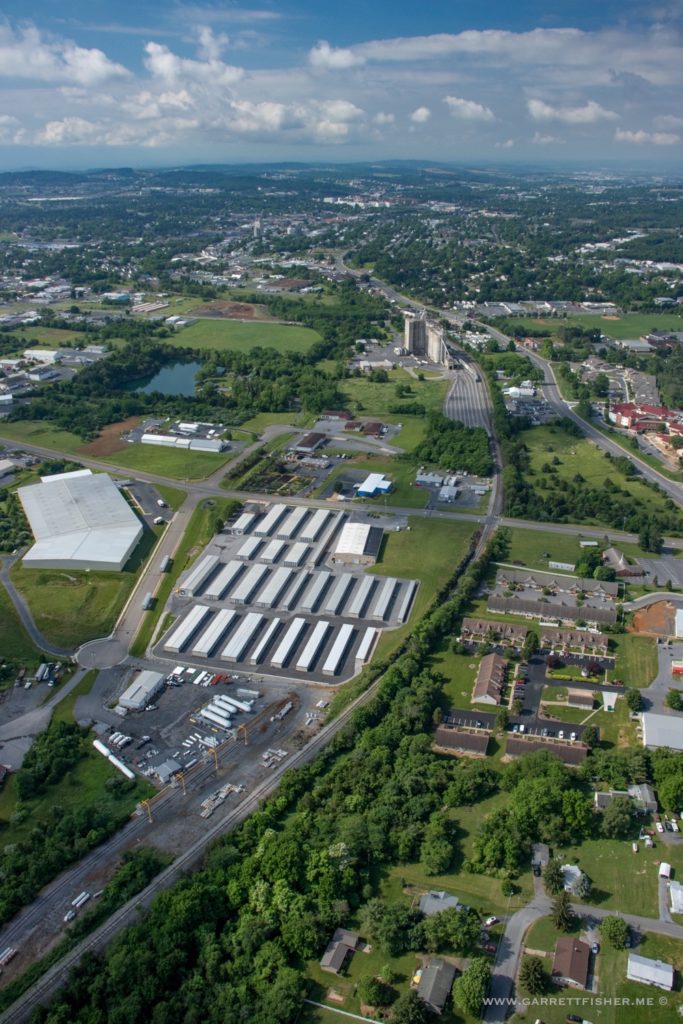 Between Lexington, Virginia and Roanoke, Virginia. 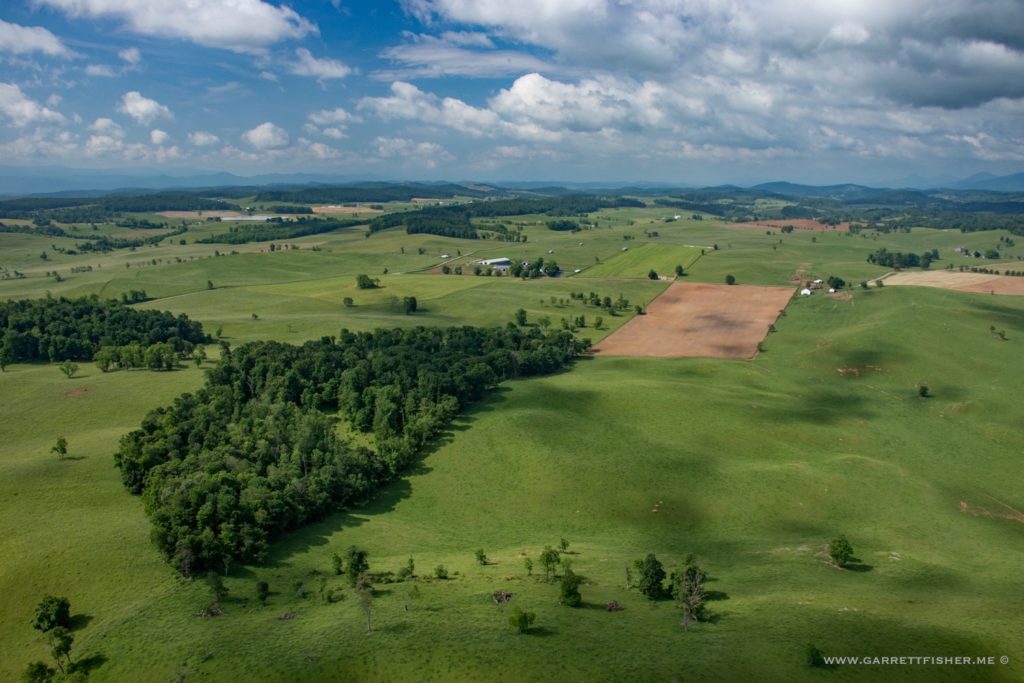 Believe it or not, this is a field and not an airstrip. 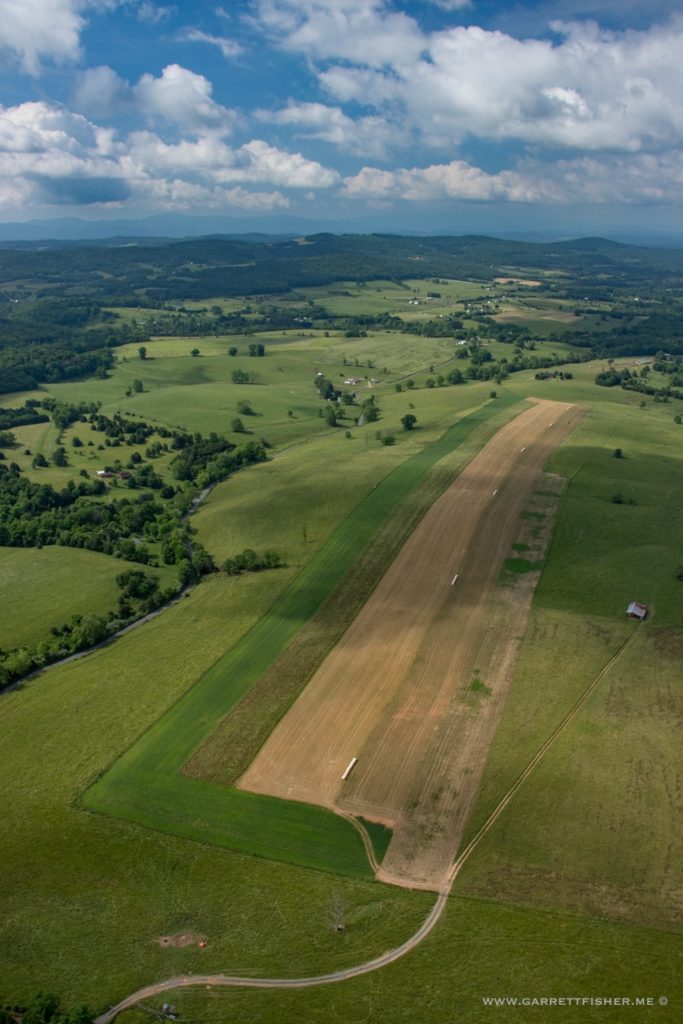 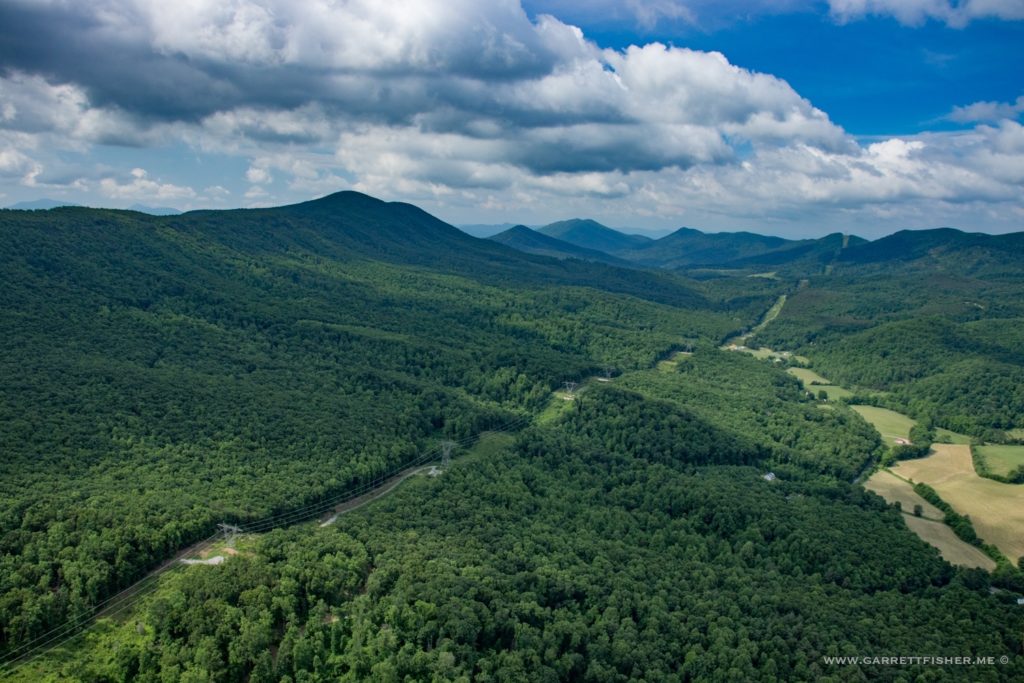 Also quintessentially Appalachian….the occasional heavy industry site in the middle of nowhere. Usually this is a fight between the jobs such sites provide to completely impoverished locals versus the cancer its pollutants cause in said locals from lax pollution regulations. Everyone usually ends up rather pissed off in the end….politicians, environmentalists, locals, workers, and heavy industry alike. 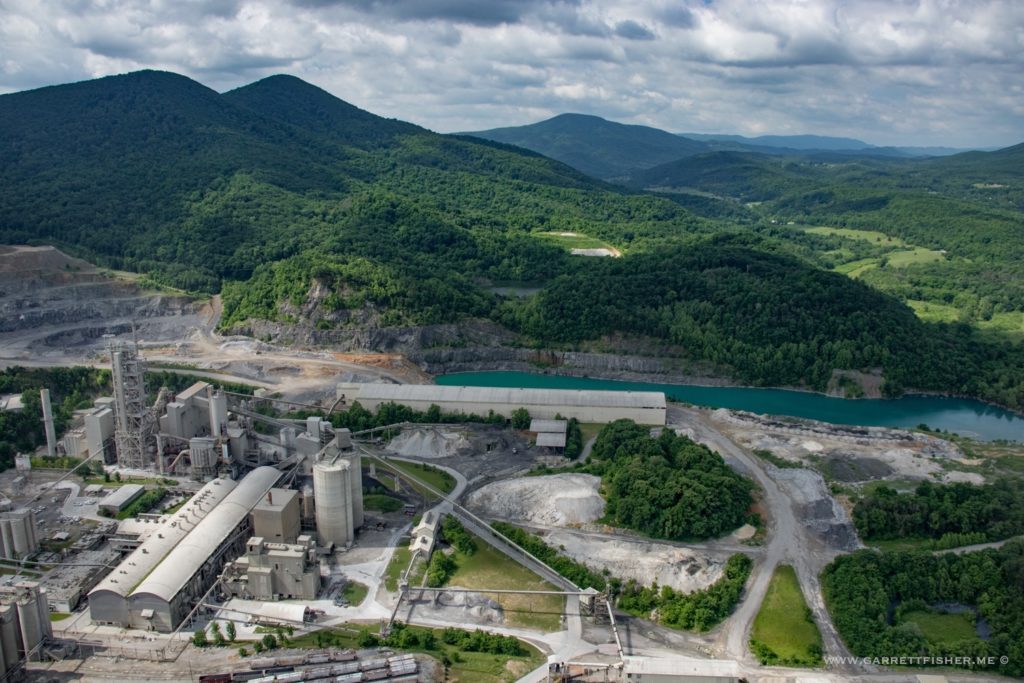 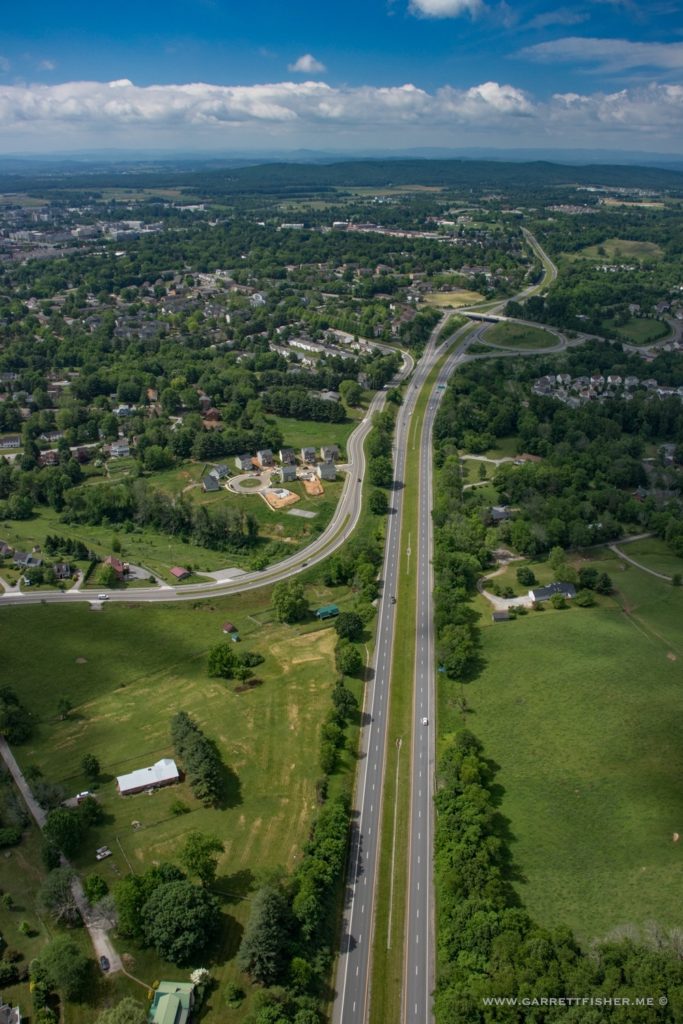 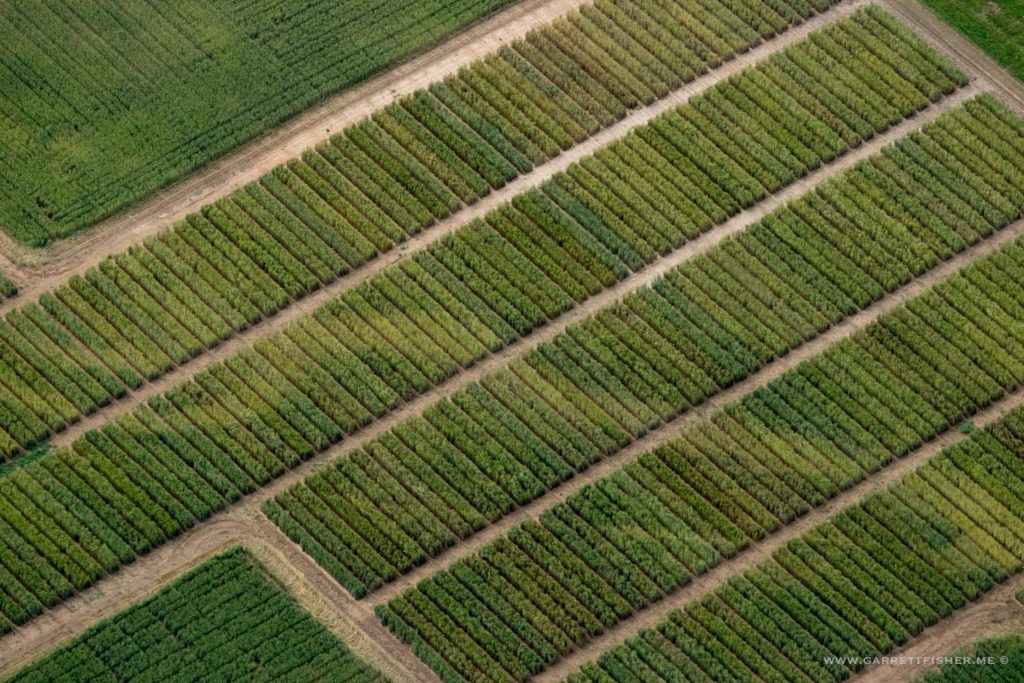 Tree farm. This species is Colorado Blue Spruce, of which one happens to grow in our backyard in Spain. 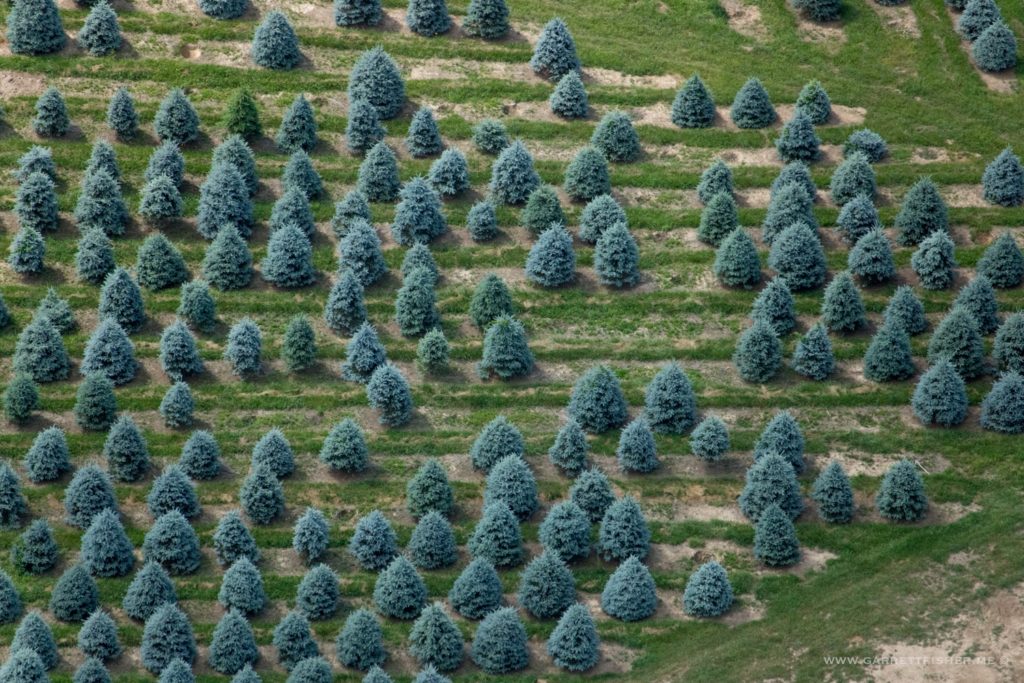 The partially “populated” valley to the right is known in these parts as a “holler.” 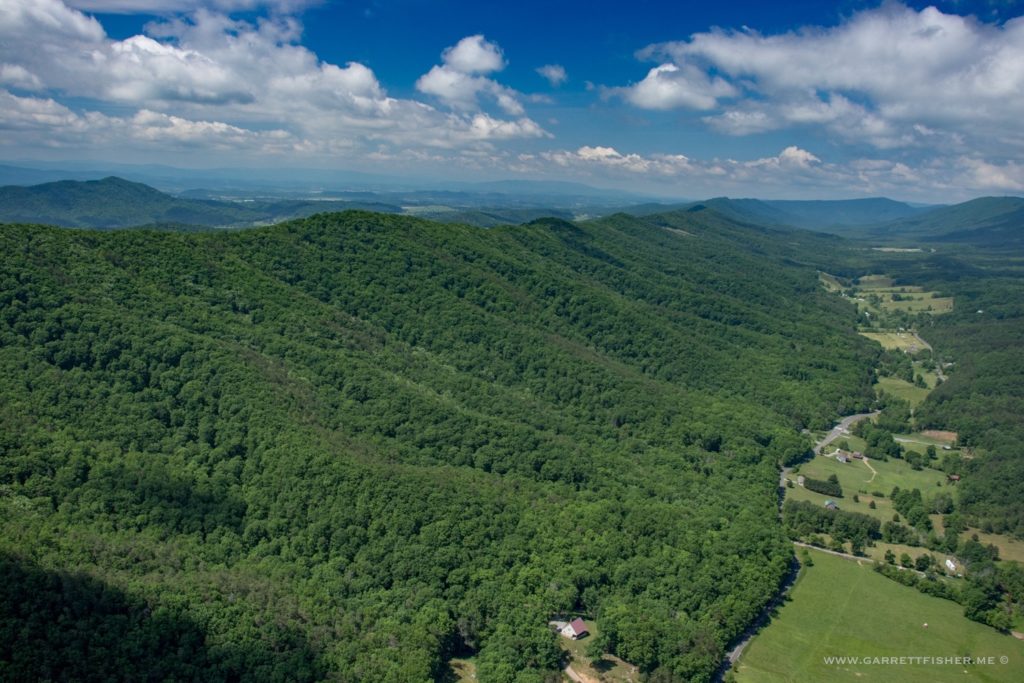 Cherokee Reservoir, Tennessee. It is now grotesquely hot and humid. 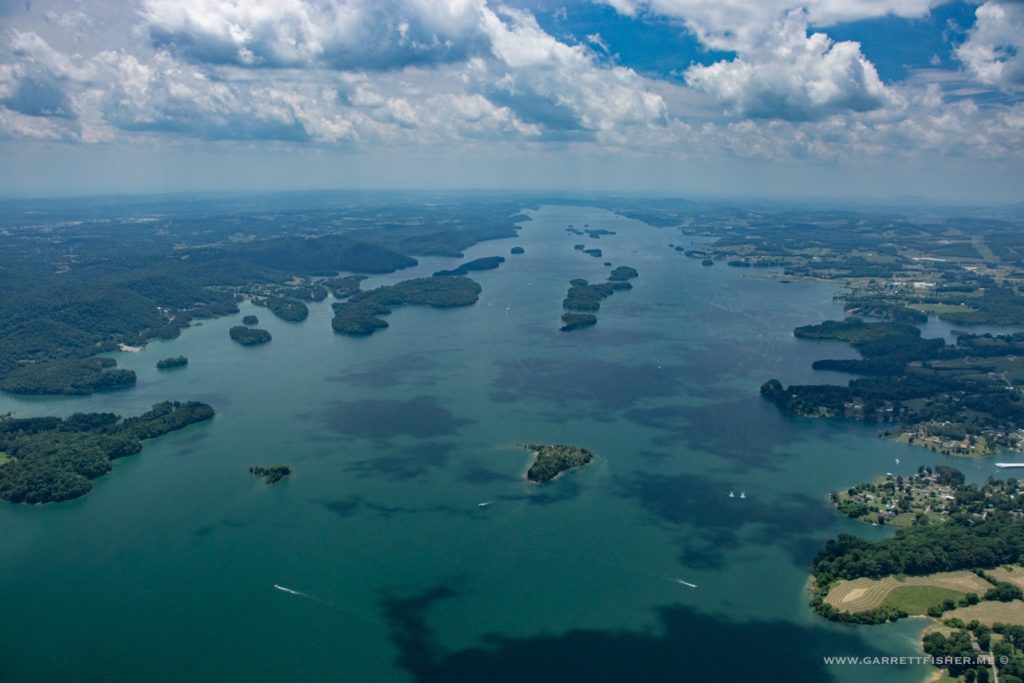 Frozen Head State Park, Tennessee. There was nothing “frozen” on this flight. It is at this point that I departed the Great Appalachian Valley, which runs from Quebec to Alabama, after having flown half of it without realizing it until I got home. 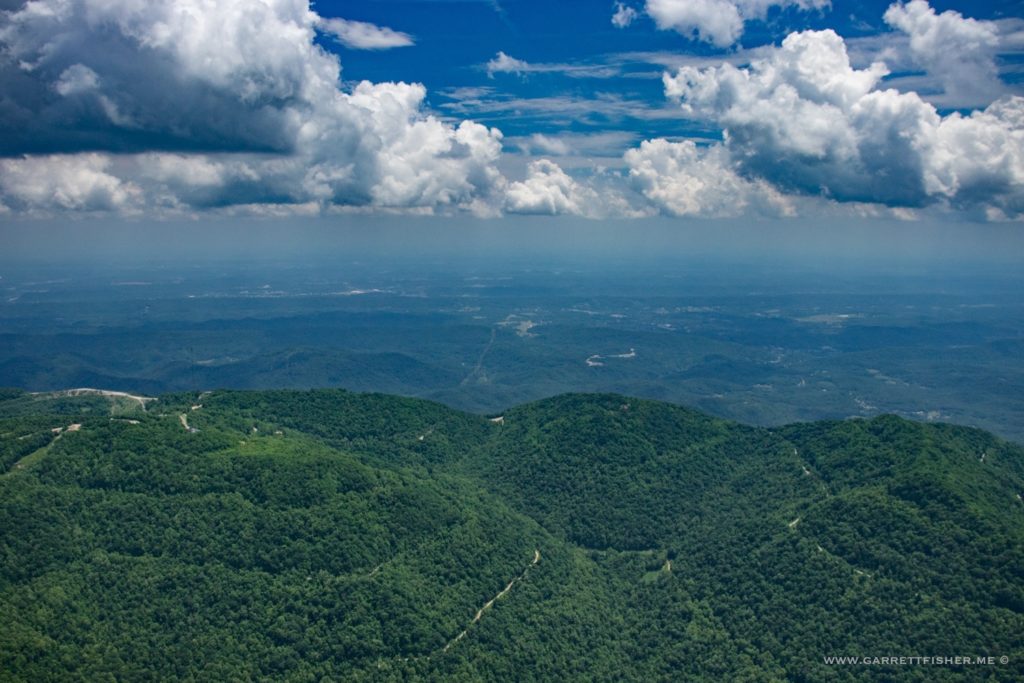 Up at 8,000 feet, fantasizing I would actually freeze. I whipped out the infrared camera due to haze. 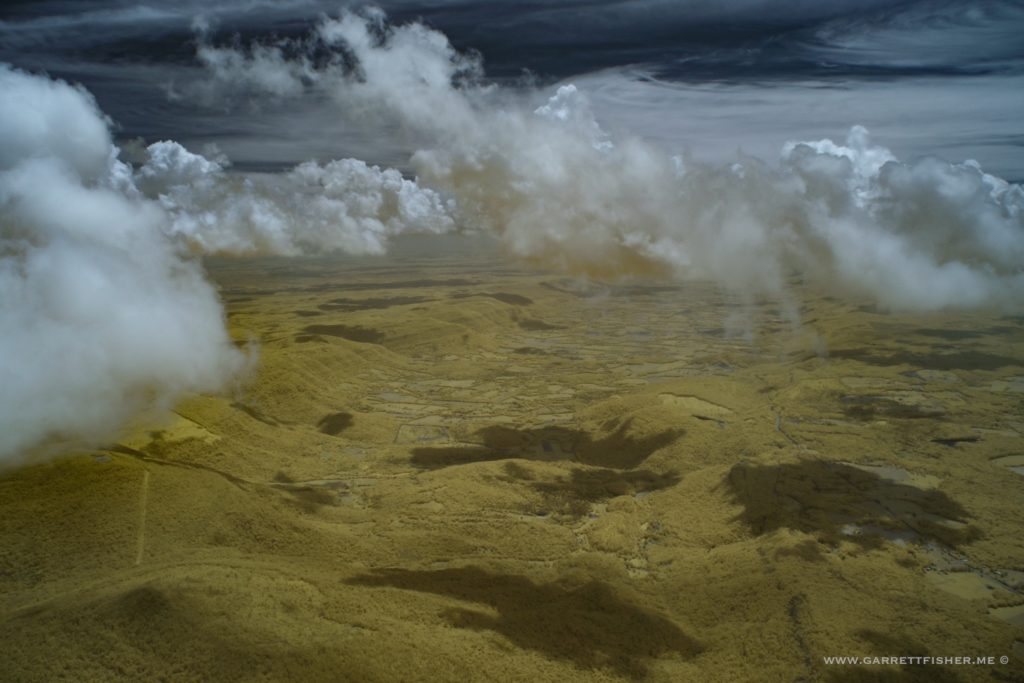 Wilson Lake on the Tennessee River – Muscle Shoals, Alabama. I could have used an “Alabama Slammer” after having flown all day in vicious thermals and heat. 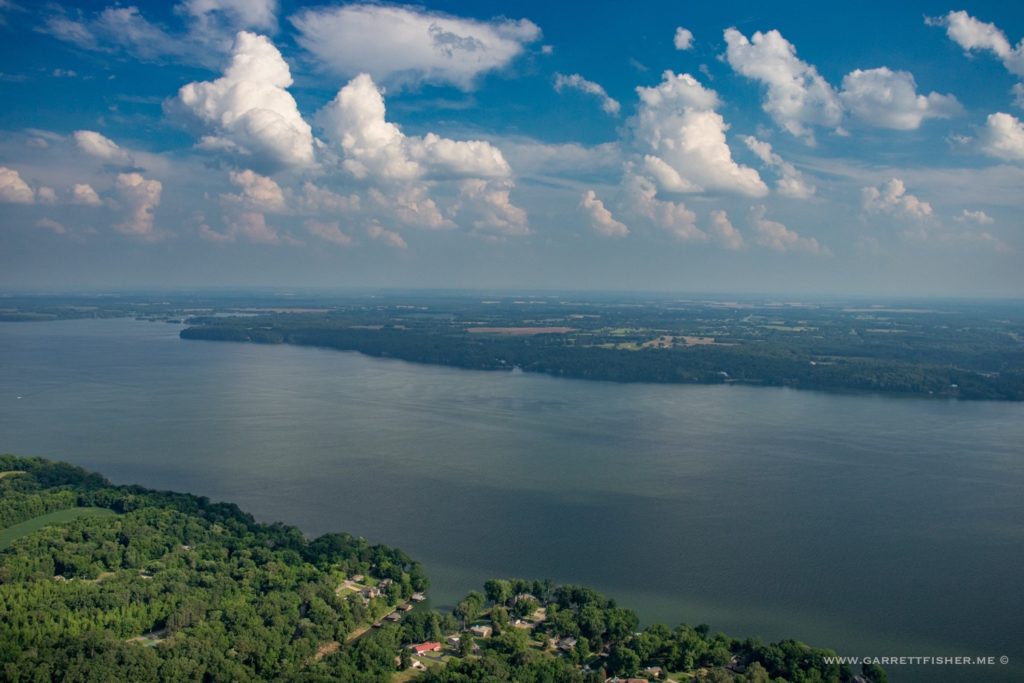 West of Ford City, Alabama (would be ironic if they drove Chevy’s). It was fields of this texture in 2012 taken from Lincoln County, North Carolina that spawned my texture photos that have been going steady since. The same vein of profusely red clay that shows up in the Piedmont of NC goes all the way through Alabama to Texas. 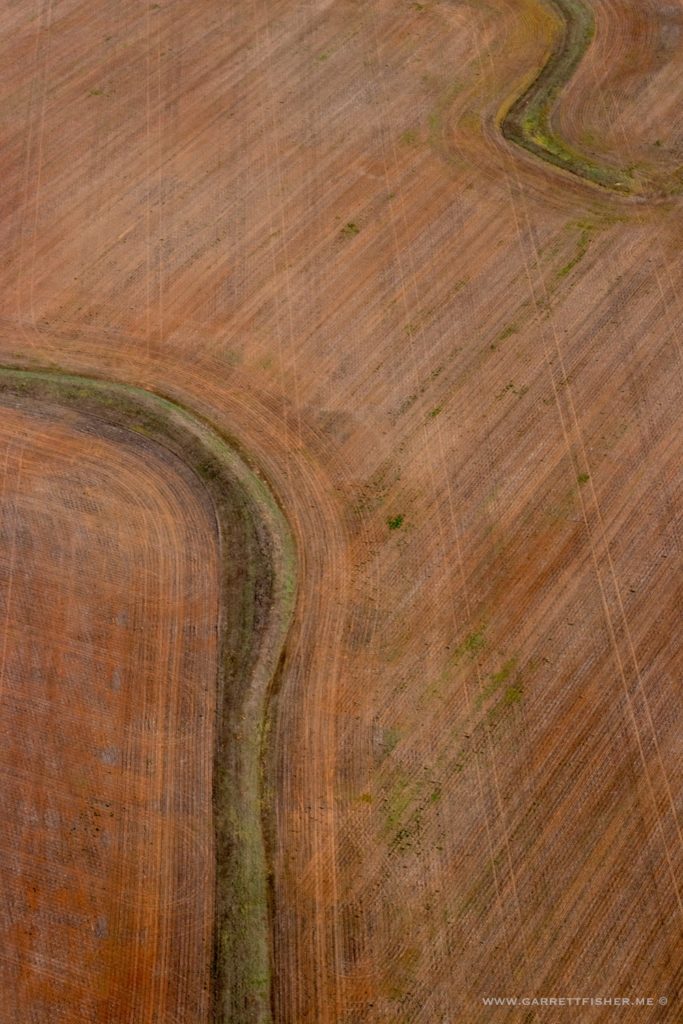 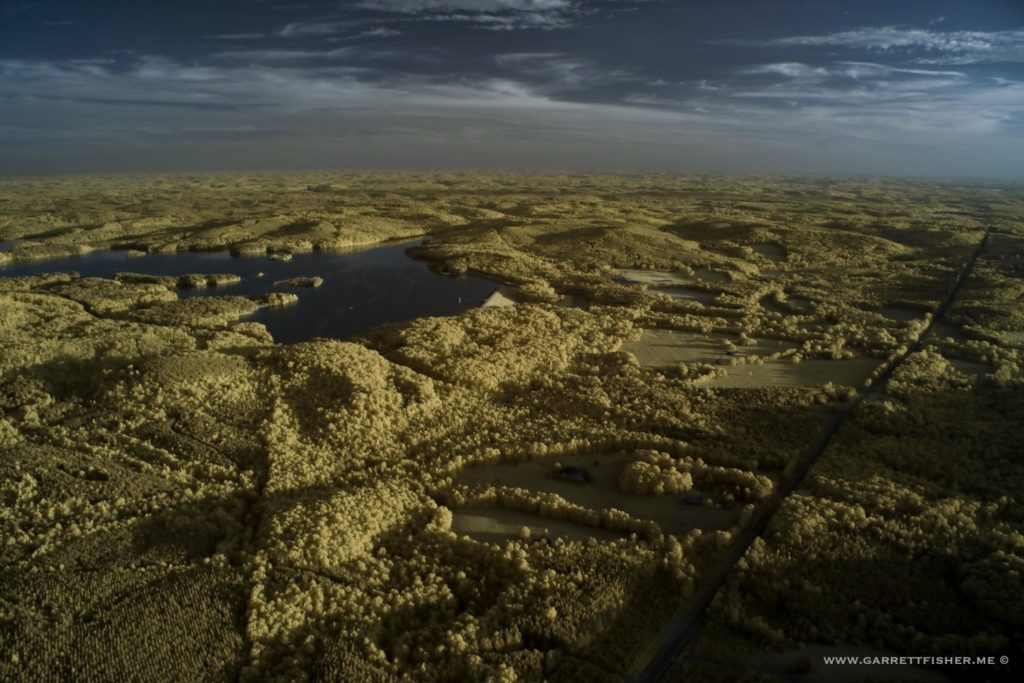 Reservoir south of Bay Springs Lake, Mississippi – infrared. I landed in Tupelo, Mississippi for the night not too long after. 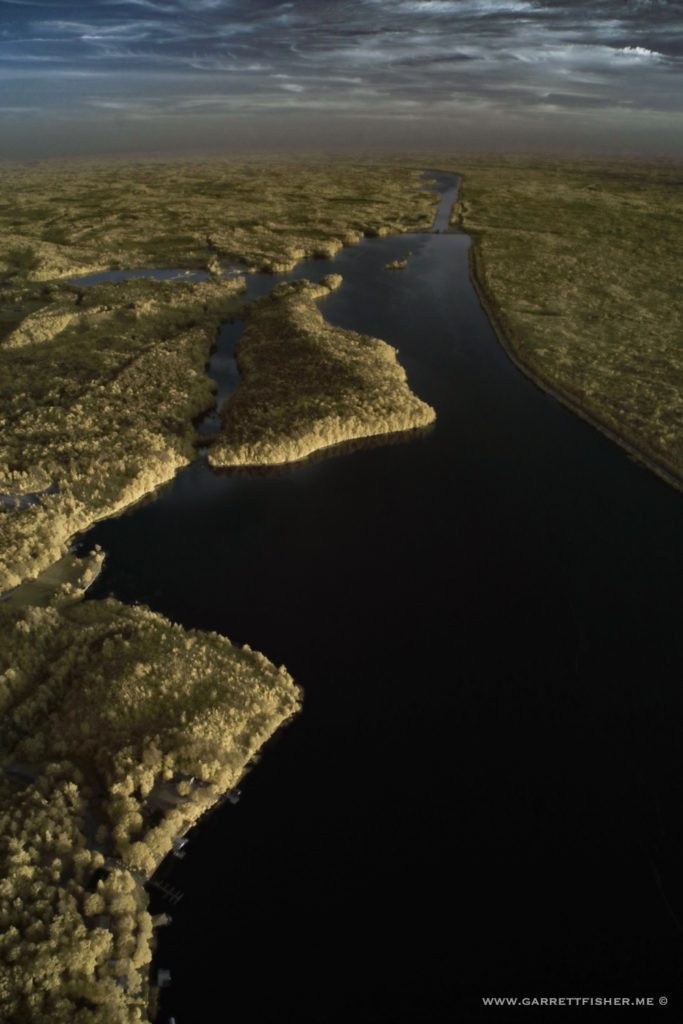