The flight was supposed to be a chase of autumn color found in timberline larch trees. As I procrastinated and allowed the midday sunlight turn to afternoon partly cloudy skies, I cursed myself for losing the illustriousness of sunlight, which accents well in the evening. I decided to go anyway, to first visit my intended destination of the more open valleys of the western Valais. If sunlight turned out to be a problem, I’d wander over to Chamonix, as the northwest facing Massif du Mont Blanc rarely disappoints. Besides, there are usually some larches over there, which may be behaving differently, even though the webcam for Lac d’Emosson wasn’t promising.

As I repeated the wanderings of 2019 in the valleys of the Valais, I was not compelled by the larch tress. They were still early, and sunlight was fading behind high clouds that were growing thicker. While I had a backup plan with Chamonix, I wasn’t “feeling the Jesus” about it, so I decided to cross the Grand St Bernard Pass into the Aosta region of Italy, determining that I’d make a go at the Val Ferret, on the south side of the Massif du Mont Blanc. While sun angles were not ideal, the valley reminds me of Jackson Hole and the Tetons, and I do not spend enough time there.

As I plodded a short distance westward toward the head of the Aosta Valley, I wasn’t feeling it there, either. Something about the lighting was off, though in limited foreground instances, it was very bright. The larches were now below me, and it was mildly irksome to see that they were in peak color in Italy, yet the sun had gone away, making it very hard to work with them.

Instead of rounding Mont Blanc and returning over Chamonix, my third plan, I noted that some mountains were sticking out above some clouds, to my southeast, toward the Italian Plain south of the Alps. I decided to throw caution to the wind (or better said, rode with the wind), and the closer I got, the more I got distracted by the presence of some sun to my left, illuminating the Swiss border and the large mountains on both sides.

The further I went, the more it seemed that the mountains sticking out above the clouds were retreating away, which was an illusion of the mind. What was happening was my assumption as to their location was becoming more accurate, which involved a bunch of nonsensical Italian restricted areas. I had never ventured this far out of the Alps, as there was no attraction. For that matter, I didn’t even notice these mountains at all; they took on appeal merely because they were sticking out above the clouds.

I continued east, enjoying solar illumination in limited doses of the Alps to my left. I asked myself how far I would go, and I thought “the Matterhorn seems a bit far.” Ten minutes later, I was rounding the bend with the Matterhorn in view, putting the pedal to the metal to climb above Cervinia. There was a notam for a new cable, installed high up on a mountain, in some sections 623 feet above the ground. How am I supposed to make sense of all these Italian (“eye-talian” as my grandfather used to say) towns with some death dealing cable strewn up at 11,000 feet? The only thing I could do was climb higher than 11,447’, the maximum altitude of this cable of doom. In the meantime, the clouds to my south thickened, which I was viewing while circling, reminding me profoundly of the Pyrenees. It may as well have been “that damn inversion” between Cerdanya and Barcelona, which I did no shortage of bitching about, until I realized then as is the case now that the inversion sat against a major mountain range is extremely beautiful.

Finally reaching enough altitude to clear the nefarious cable of doom, I added some more altitude and squeezed over the pass just to right of the foot of the Matterhorn, the mountain known as Mons Silvius back in the Roman era. This pass was the concern of Roman generals millenniums ago; now it means that the sightseeing helicopter from Zermatt might get closer than I’d like again. Wait a second….are they running them with the pandemic?

Mons Silvius, Berg der Berge (“Mountain of Mountains”), is seemingly small and large at the same time. A “horn” in its geological essence, it gets smaller the higher it goes, where it ends as a famous point. Yet, for some reason, I find that a simple photograph is not enough. It should be; yet, it seems each time that I visit that I am not sure what to make of the mountain. It takes on a different personality, playing games with my viewfinder, with its small summit yet monolithic base, which I am for time’s sake relegated to swirling around. I don’t have the 20 minutes it will take to attempt to climb to 14,000 feet to get near the summit, so I stay down at the razorlike ridges that comprise major climbing routes and the border with Italy and Switzerland.

After my surprise trip to one of the most famous mountains in the world, it is time to turn west and head back before sunset. Oddly, the very clouds that were ruining my original aspirations have now made for a perfectly balanced image: snowclad mountains below, illuminated skies above, texture in the entire image. Nothing about the flight went as planned, not even the many improvised backup options that I had formulated. Yet, what turned out to be the best part of the flight was the thing I hadn’t planned whatsoever. That seems to be how it works most of the time.

Looking into the Aosta Valley…appears promising. 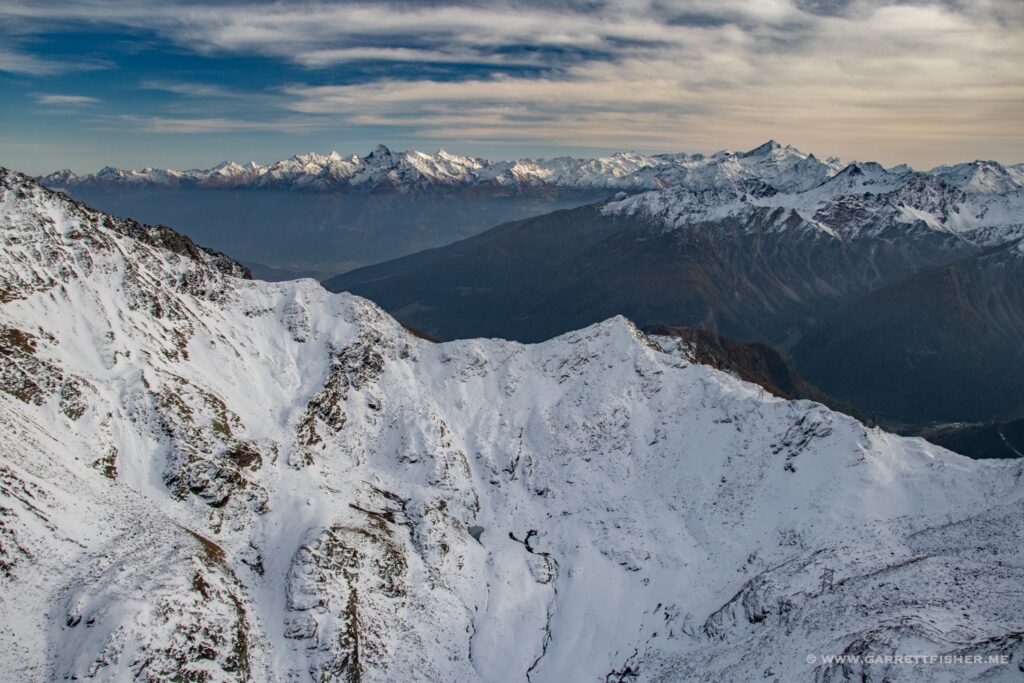 So I went the other way…Valpelline, Italy. 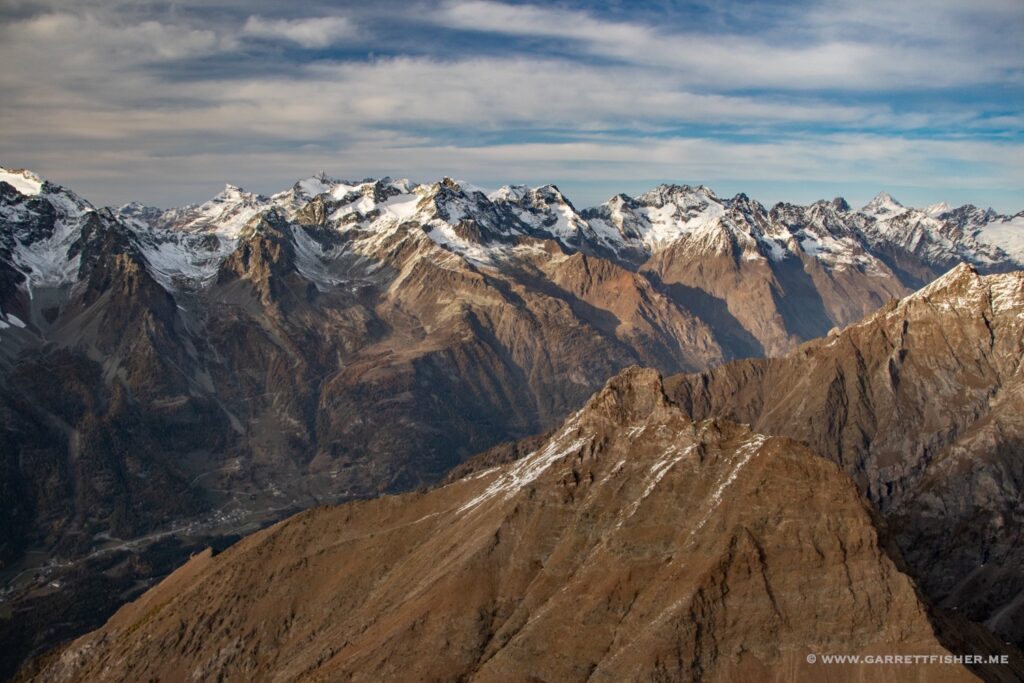 Some sort of mountain on the south ridge of the Valpelline. 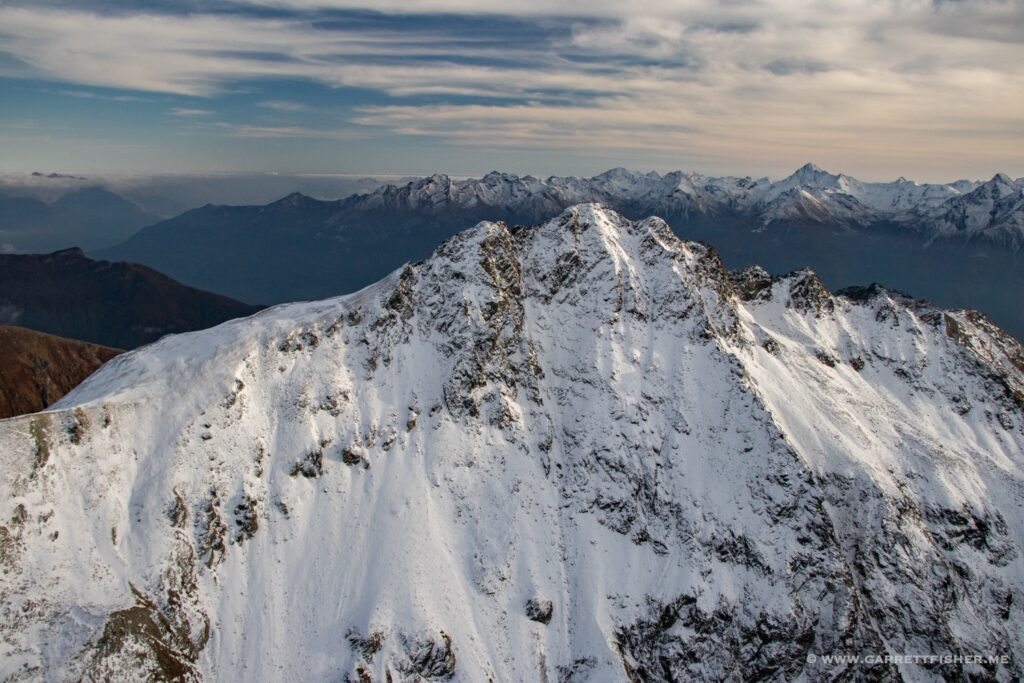 The Matterhorn that I wasn’t going to. 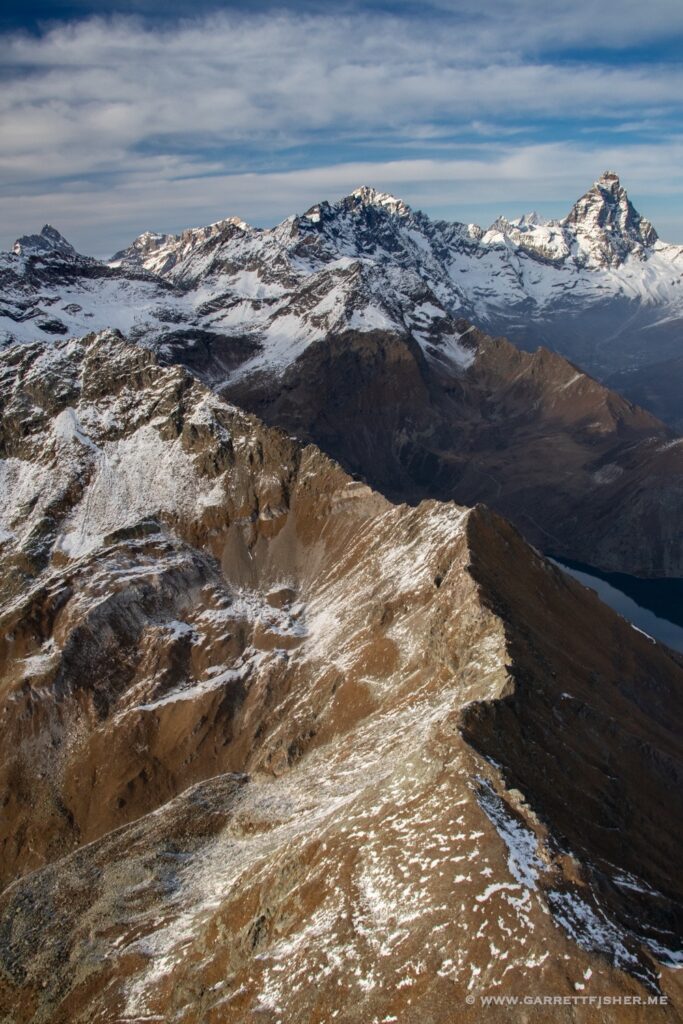 Inversion over the foothills and plains of Italy, viewable while climbing. 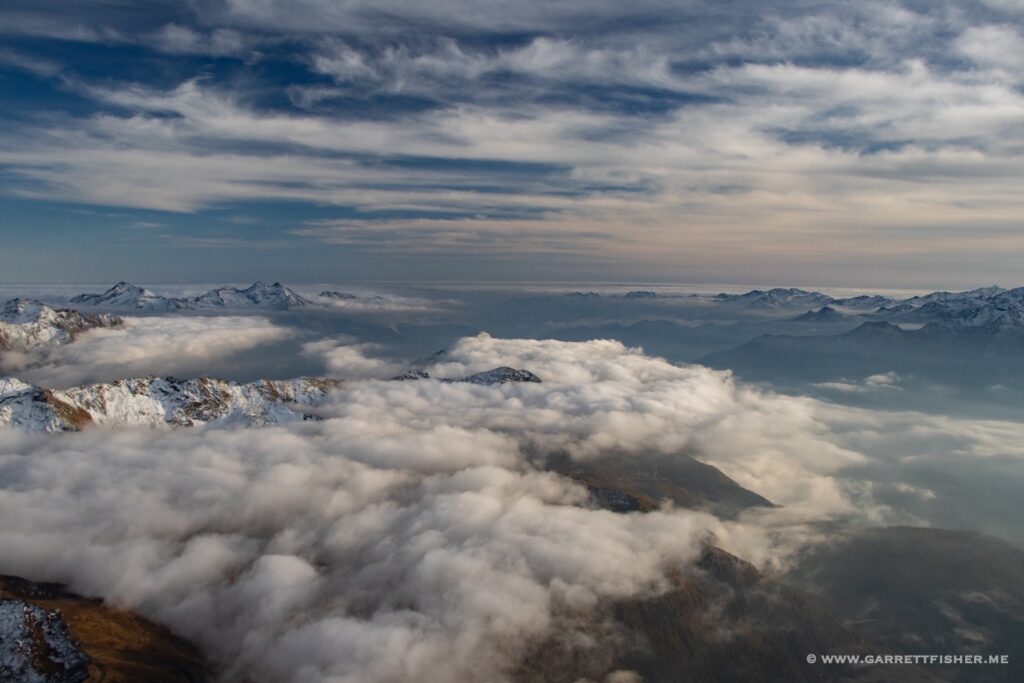 Mons Silvius, Berg der Berge. Pass below that concerned the Romans. The nefarious cable of doom that someone strung up is also below, so I guess the stuff that matters is below the airplane. 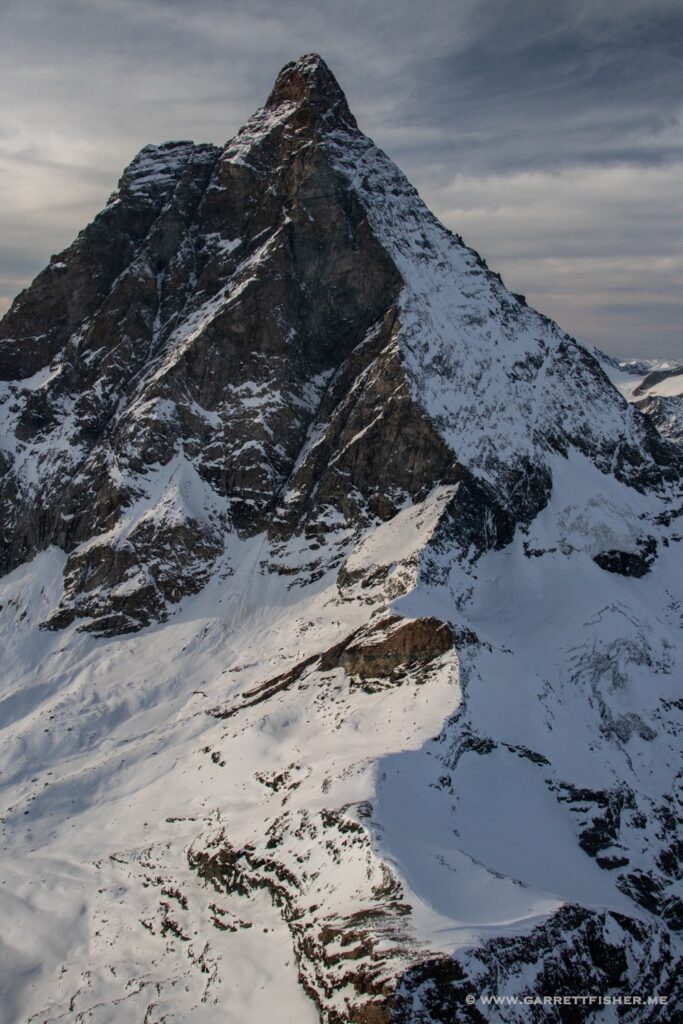 A more traditional view, albeit the “dark side.” 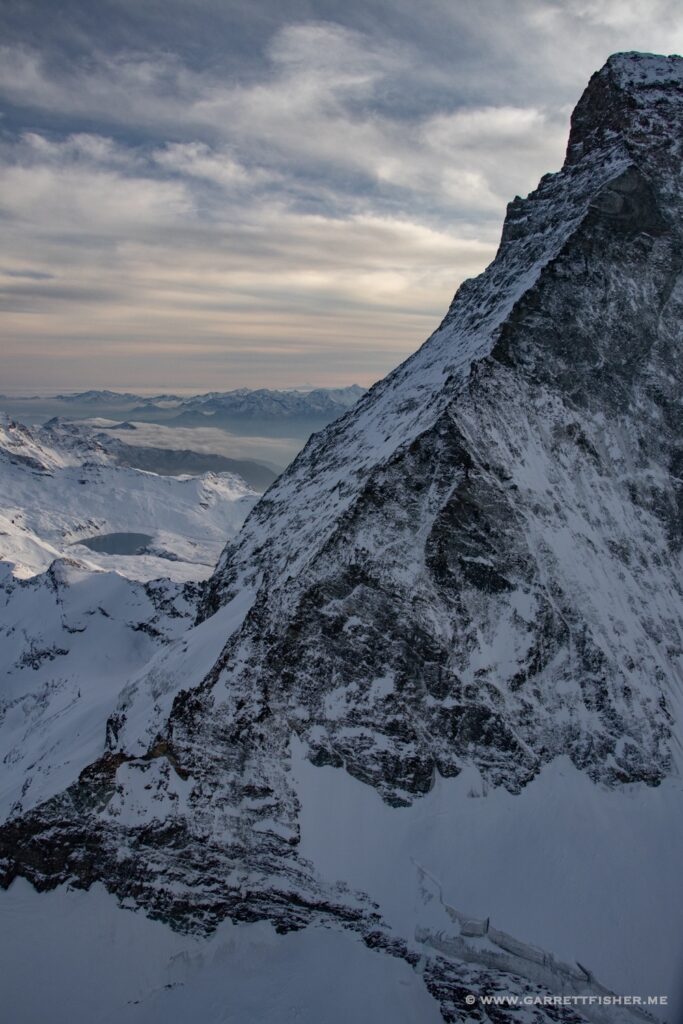 Western ridge. There is a refuge visible on the ridge. 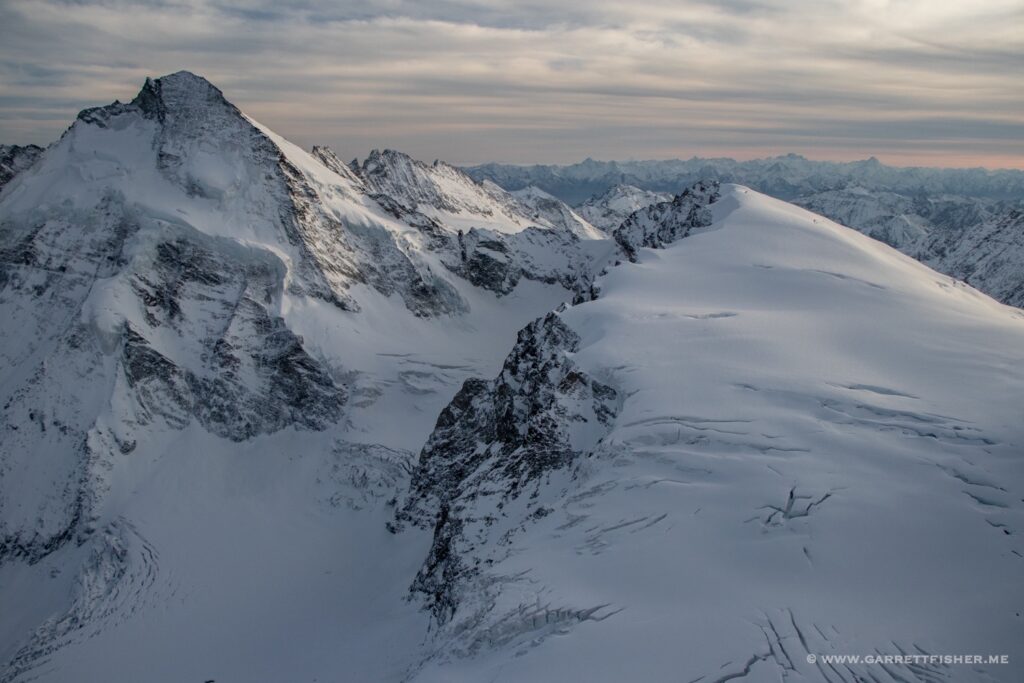 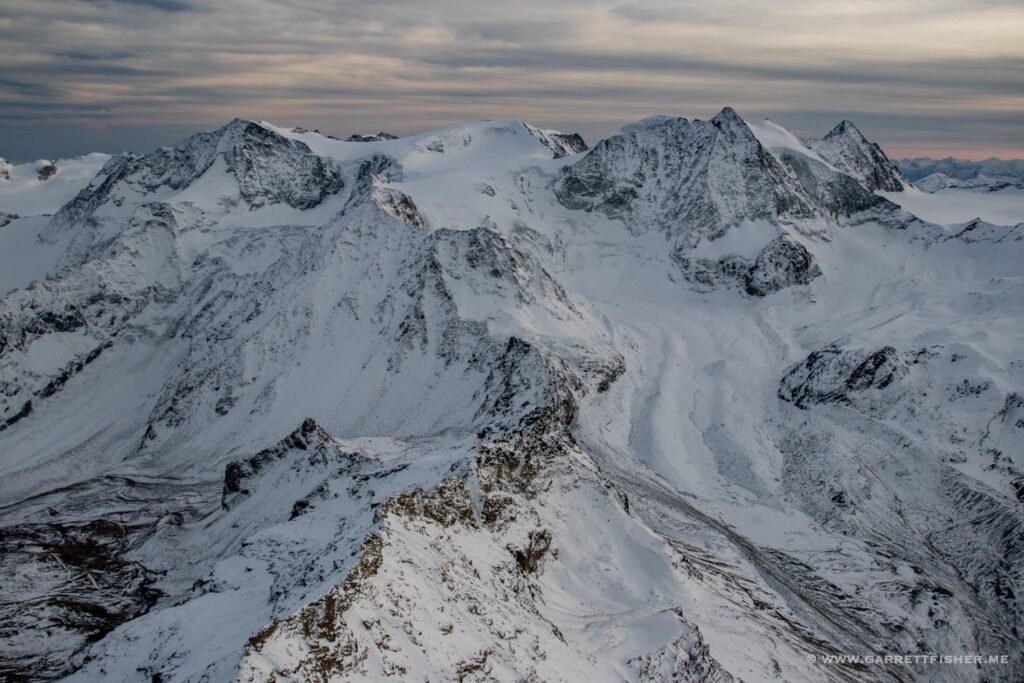