Apparently, I leave myself a bread crumb trail from prior flights. In this case, I had mentioned in my “Mons Silvius” post how I “do not spend enough time” in the Val Ferret, which reminds me of Jackson Hole. Part of the problem relates to the fact that it is down in a hole of sorts. I must pop over a pass somewhere, descend a few thousand feet, wander around without smacking into a gondola or pile of rocks, and then climb in a circle to get out. While that is not my standard definition of a flight in the mountains, it is outright impeded by my own Greek approach to time. I simply do not like to go flying these days unless it is the late afternoon or evening. That is a deal breaker for this valley, as the largest mountain in Europe stands like a wall, blocking the evening light, which turns this attractive place into a literal “vale of deep shadow.”

It was up until about 18 months ago that I viewed the best time of day to fly as smack in the middle. Blue sky was the deepest, whites were brightest, light was full, haze diminished, and everything was generally resplendent. That was my modus operandi in the United States (where haze is a fraction of Europe to begin with), and became the initial fixation in the Pyrenees, as luminosity was stunning. Slowly but progressively, I began to find midday to be brash, refractive, and dull, whereas evening would come alive with shadows, hazy mystique, and splendid colors.

Like everything that I do, there is one setting: too much. Thus, I began overdosing on evening flying, excluding the middle of the day entirely, which meant that I wouldn’t notice such things as the Val Ferret as “it is always dark so why bother.” That continued until, like a crow [or a monkey], I found something else shiny to occupy my attention. Considering 2020 to be practically a failed year when it comes to autumn (most of them are, to be honest, since 2013 in Colorado), I had a hankering to chase some remaining tired larch color. Connecting the dots that a “vale of deep shadow” in evening would mean a ‘vale of deep sun’ in the morning, I quit the Greco-Spanish flying schedule and drove over the airport before lunch.

The results are minimally adequate. 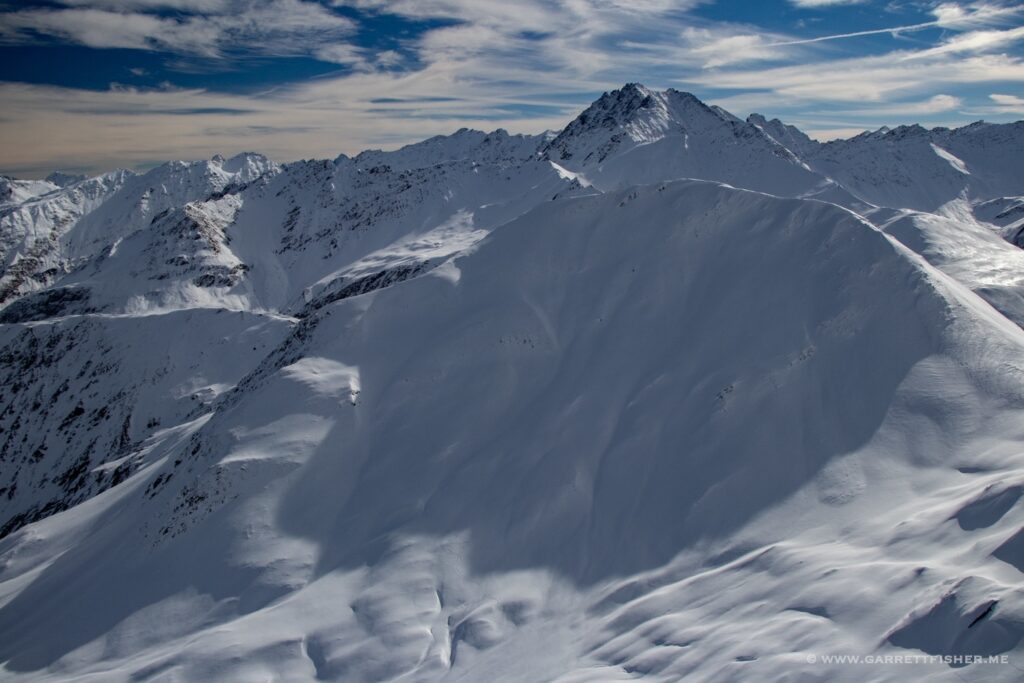 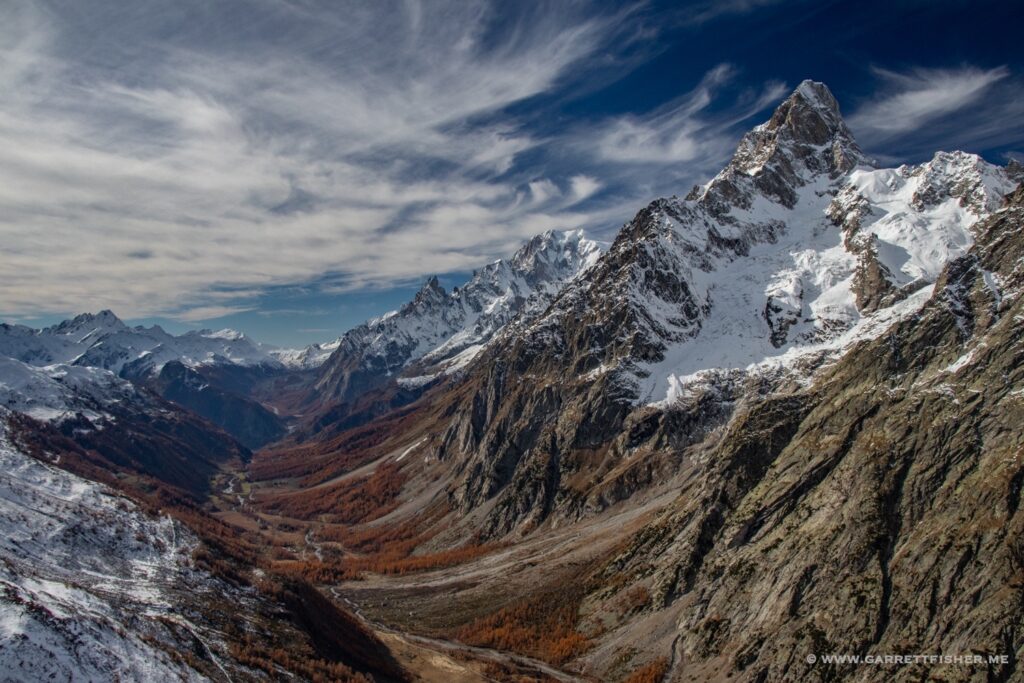 Triolet Glacier moraine, beneath Grandes Jorasses. Not a ton of room in here. 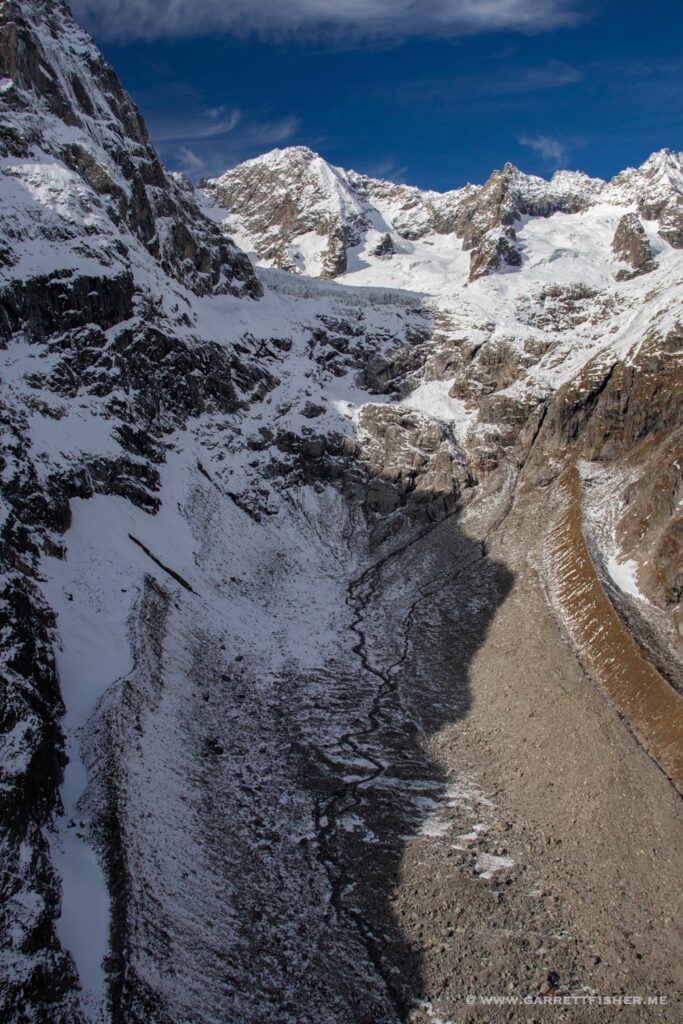 This image is not half bad. 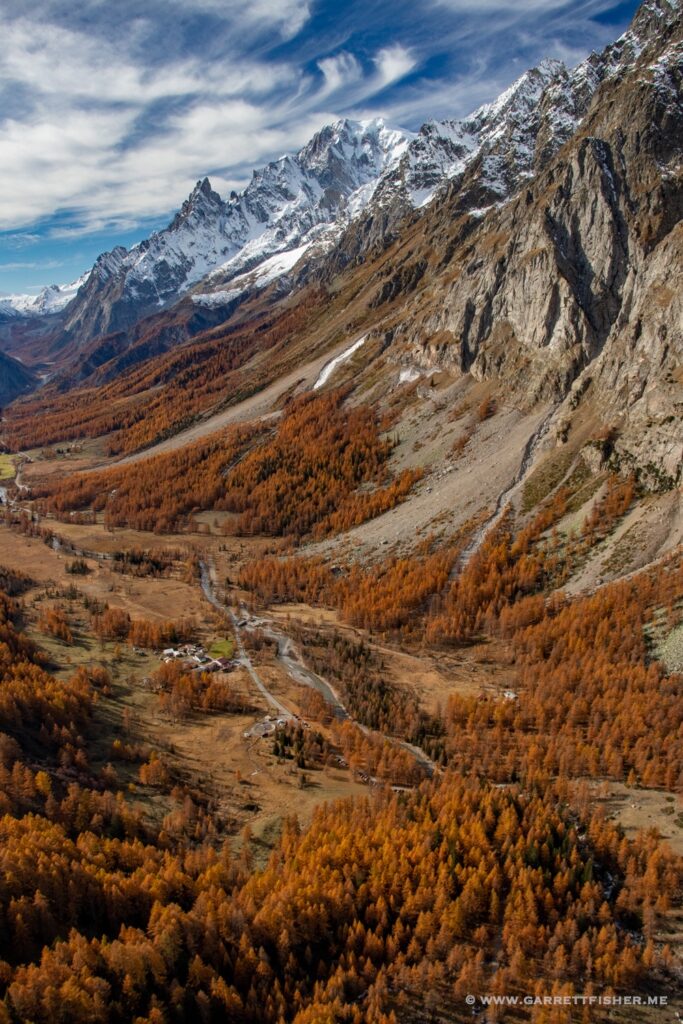 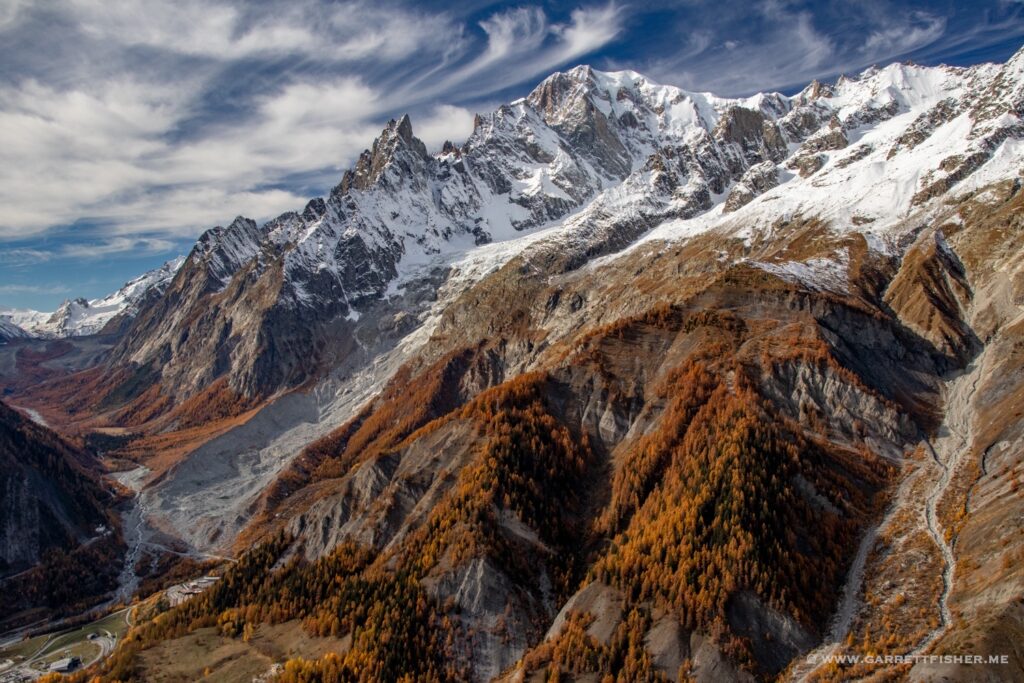 Terminus of Glacier du Miage, with autumn color. Did not expect to see that…. 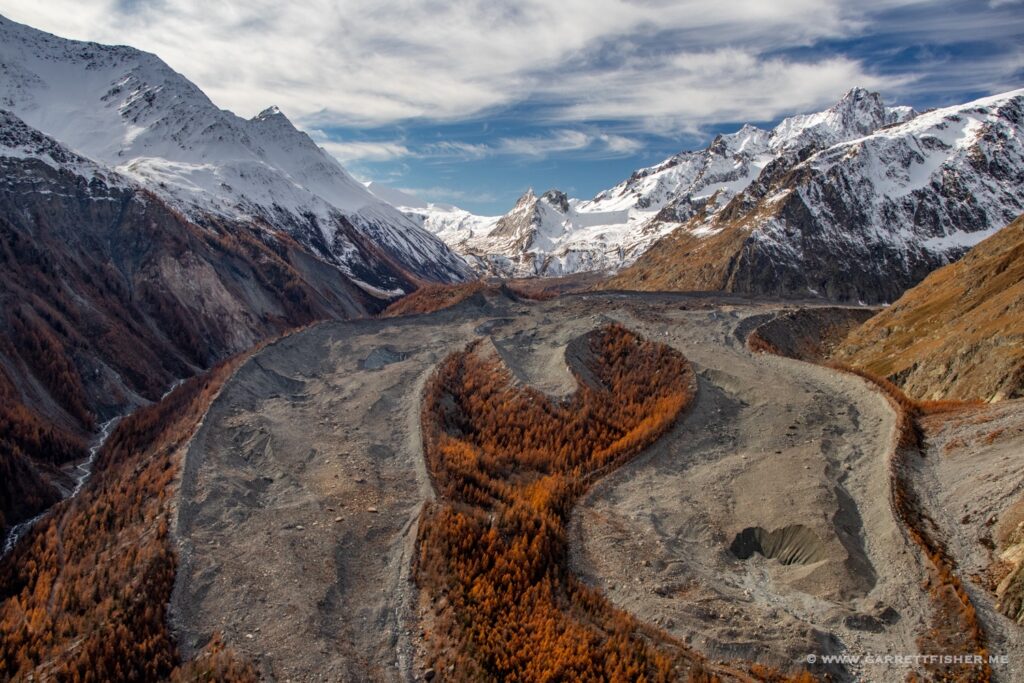 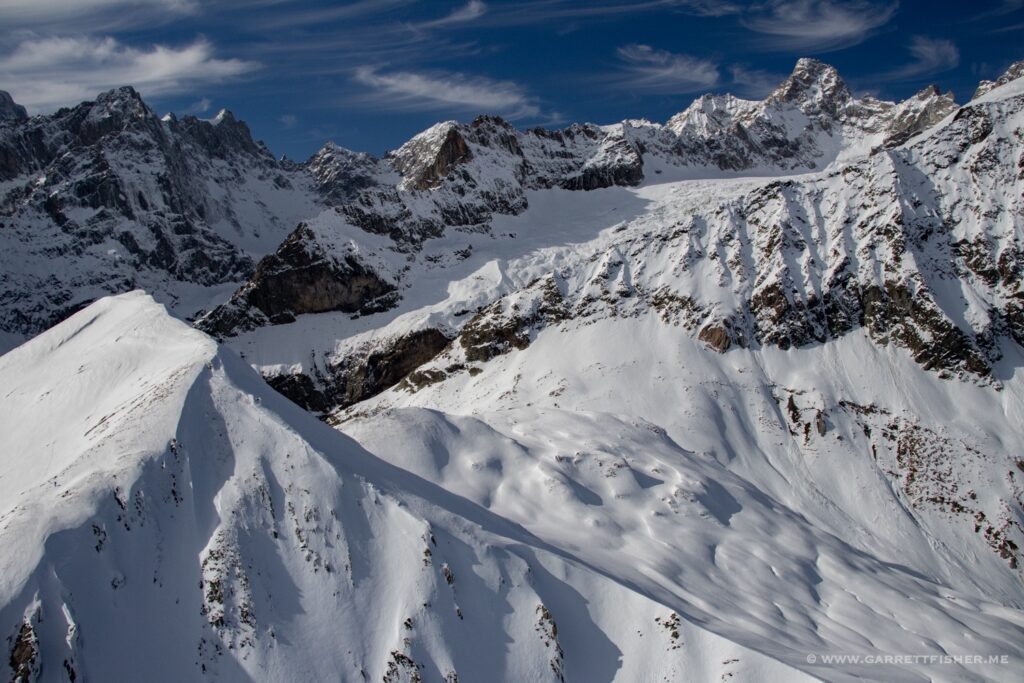 Finding Jesus on the summit? I waved the wings back at the hikers…. 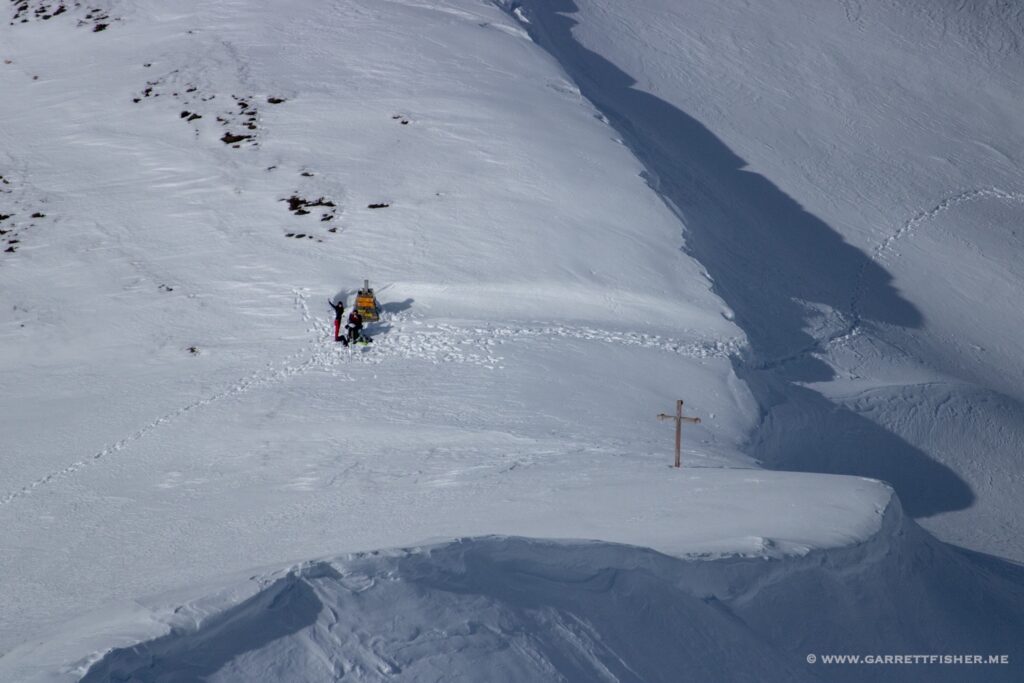 Eastern end of the Massif du Mont Blanc. For the discerning, there is a ridge in the foreground, with a deep valley behind it. 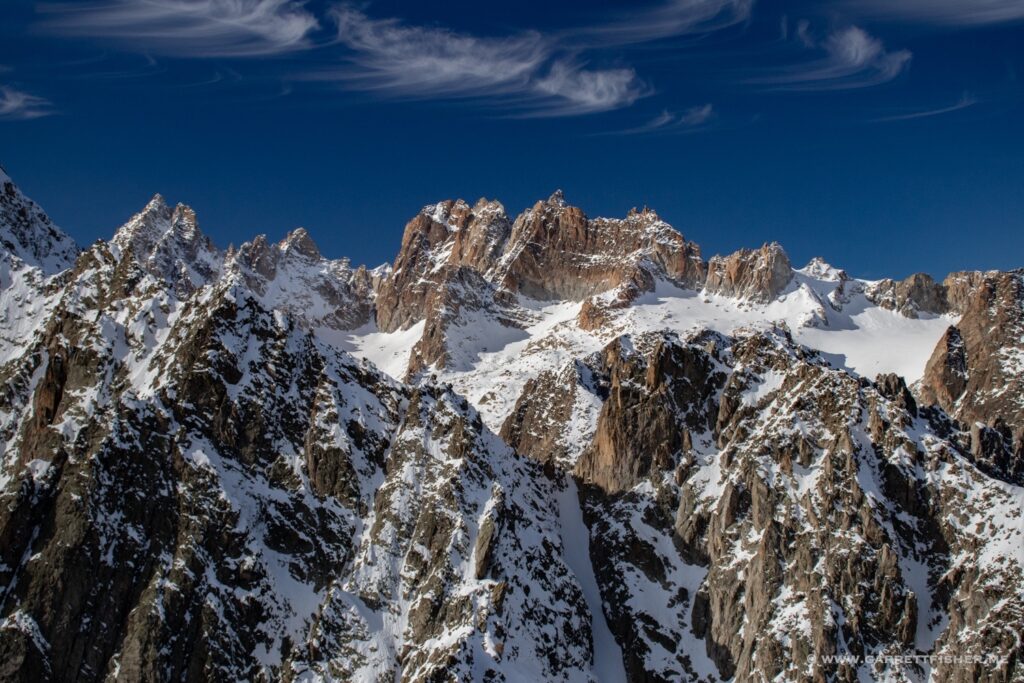