Fall is a spiritual obsession on my part that usually goes unfulfilled. Most spiritual quests are, as people spend time in convents and monasteries and don’t ever seem to come away from such experiences exclaiming that they arrived at their philosophical destination, are metaphysically well adjusted, and life can go on. That being said, I have a fanciful goal to basically go apeshit with the camera photographing pretty leaves every autumn. Consider it my personal Tibetan monastery.

I decided to focus on the Greater Yellowstone Area. Its catchy, would sell nice as a book, and gives me enough of a place to find variety.

The leaves have been absolute crap this year.

Thus, I decided to make it “Fall in the Northern Rockies,” largely because the leaves suck around Yellowstone, I happened to be flying all over the northern Rockies, and because it happened to be fall, despite my ignorance, while I was flying over them. As the colors decided to finally make a bleak display of themselves at 8,500’, I decided that I should, at least, find some color within 50 miles of home to add to the whole Rockies compendium.

I intended to hit up the Teton Valley in Idaho, which is basically the west side of the Teton Range, at the border with Wyoming. Taking my nice and safe path over Pine Creek Pass in the Snake River Range, I noticed some nice color to the east, deep in the rolling, wilderness, dangerous terrain and said to myself “sometimes the juice is worth the squeeze! I am going in!” This being despite all of the standard disclaimers about engine failure coupled with wilderness. Yawn…….was I saying something important?

Anyway, color was spotty though vivid. I made my way north along the western Teton foothills, and as I came within 10 miles of Driggs, Idaho, I noticed an appealing mass of smoke emanating from a forest fire. Hmmmm…. “I checked TFRs and there were no restrictions…..” I decided to call Driggs Unicom to be certain, and they advised it was a control burn with no aerial fire fighting. Yeah, you know what happens next.

I must have circled and dive-bombed the forest fire for about 20 minutes, taking pictures like a madman the entire time, clipping the smoke plume, going under it, and sometimes through the fringes of it. Of course, I was on my backup SD card, which is inanely slow, and had to let the camera buffer absorb my “gay Parisian fashion photographer” approach to taking 10 to 30 photographs per minute (minus the lisp and “Yes! Work it!” commentary), being limited to 7 photographs at a time followed by a glacial 10 second wait.

Needless to say, that was a very cool find and will definitely land in the book on fall. After all, the whole place erupting in flames has become a fixture of paradisiac life in the West.

Aspens from directly above, with a carpet of fallen leaves

Snake River Range giving way to Teton Range (Grand Teton hiding on the horizon). Much of the fall color around here is in pockets like this. 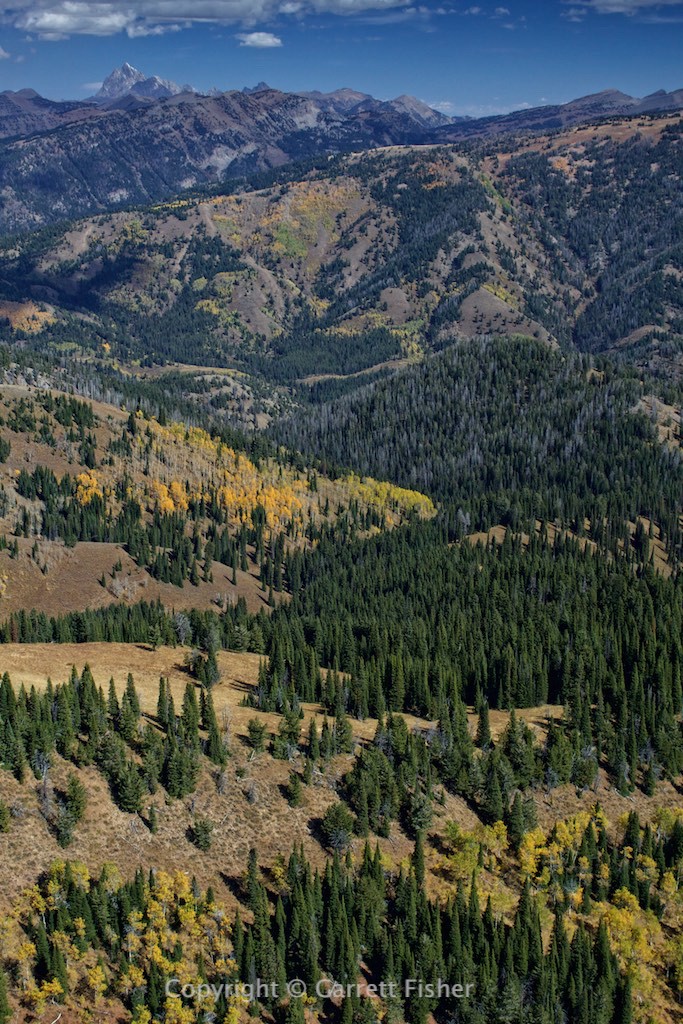 Teton Range foothills. Color is not so bad over here! 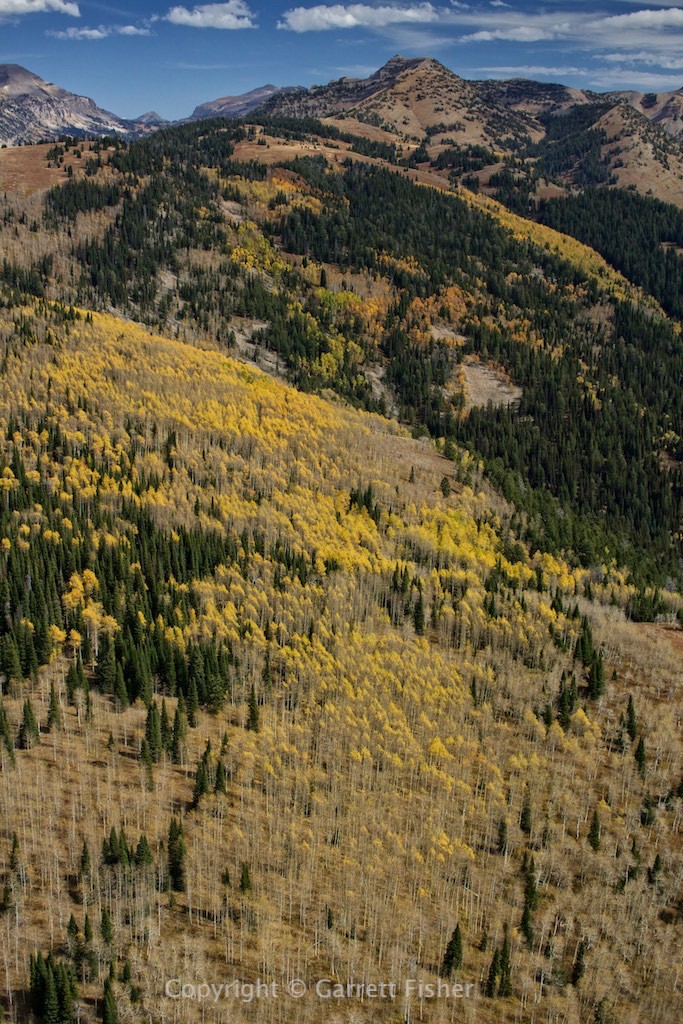 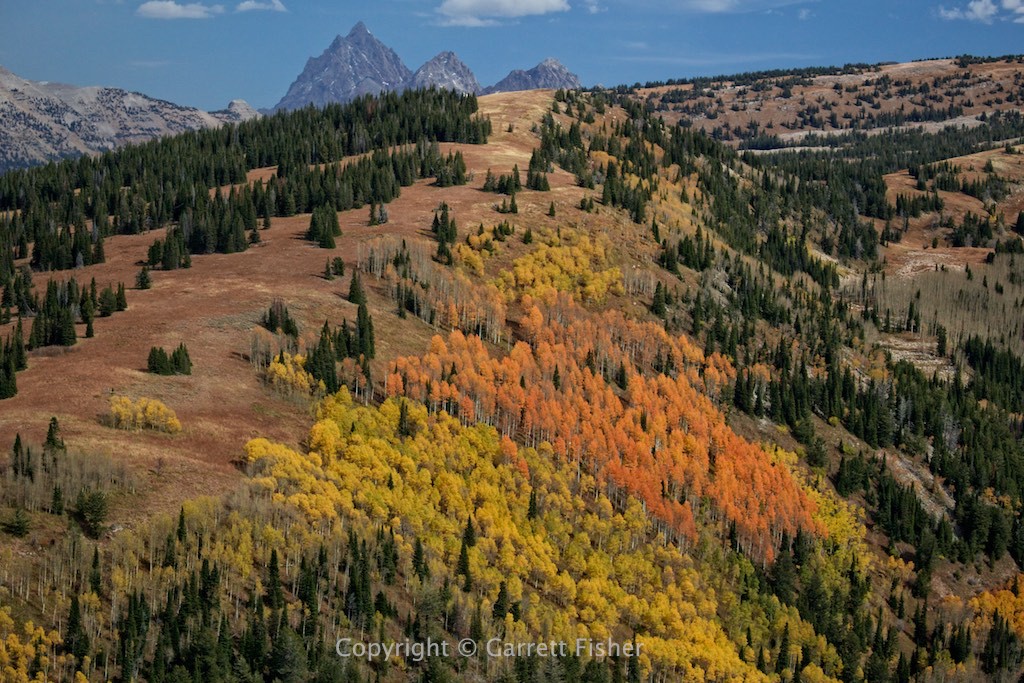 The aspens in the West are quite pretty in the fall…..if they aren’t on fire. “Charcoal black is the new golden yellow” 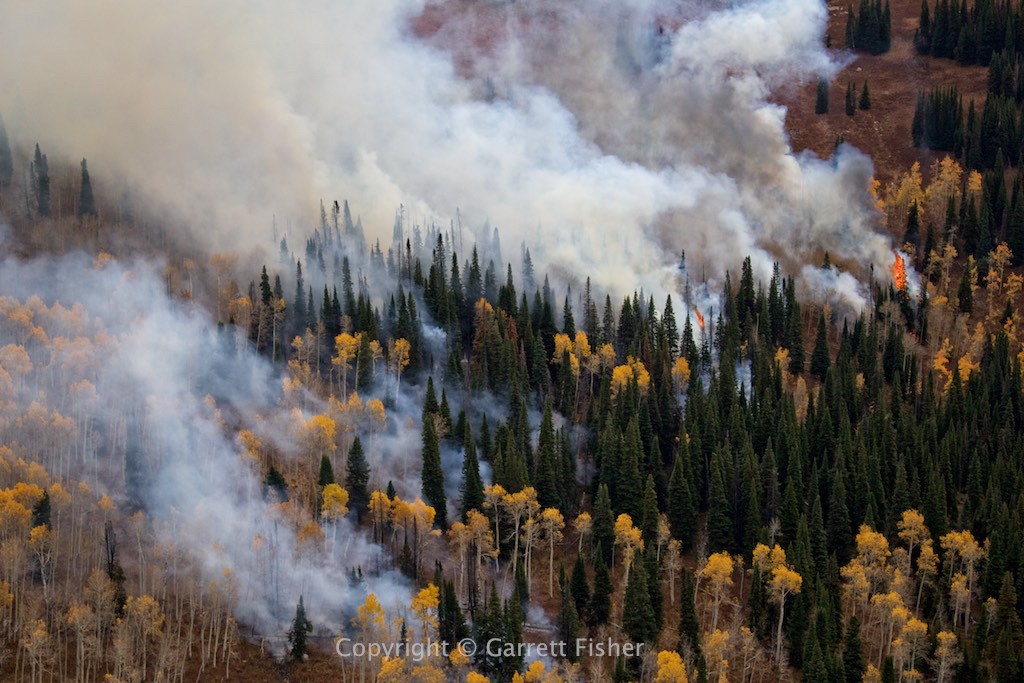 Other than the pyromaniac side of me that is quite happy, I am having a hard time understanding the ecological benefit of burning the few pine trees hanging out in the aspen grove….. 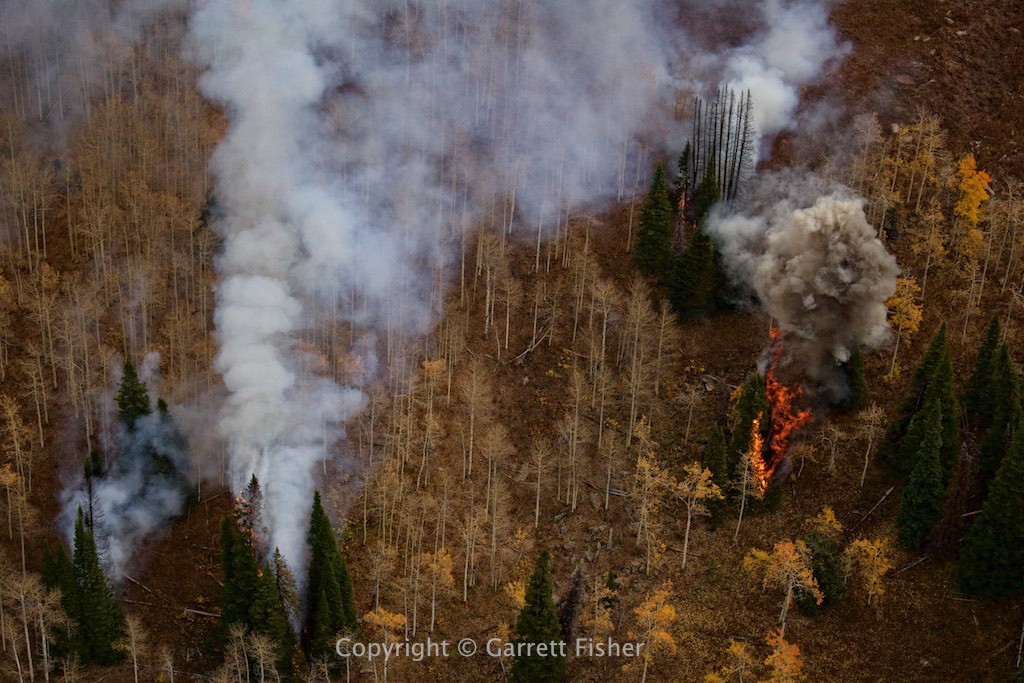 Looking directly down at a 40′ tall fire plume, from an airplane, is freaking awesome! It makes me want a few Hellfire missiles for the Cub. 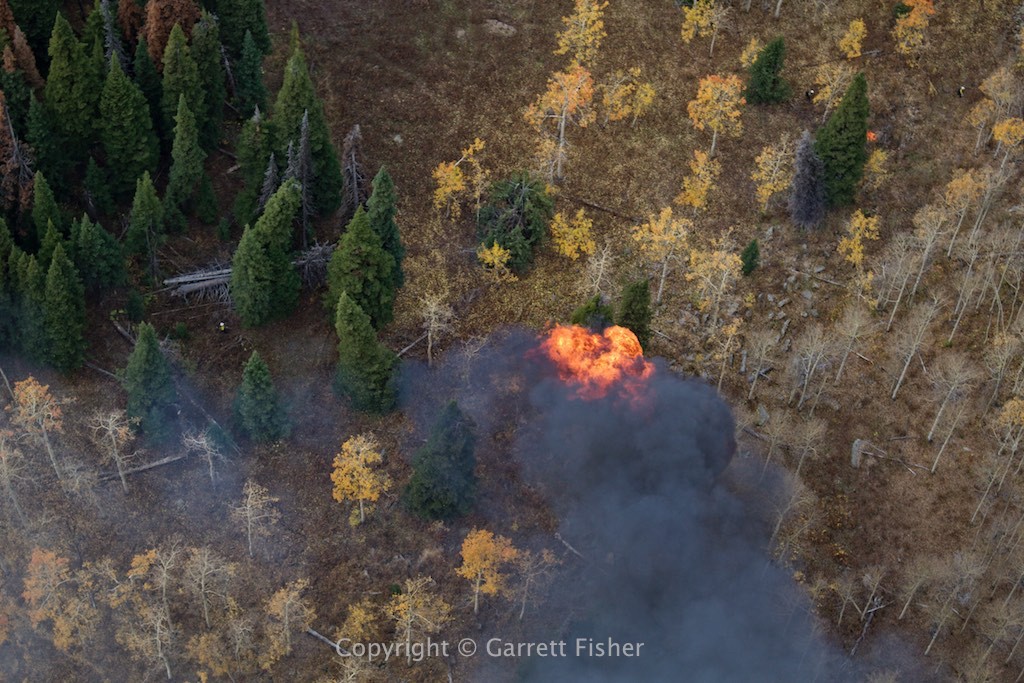 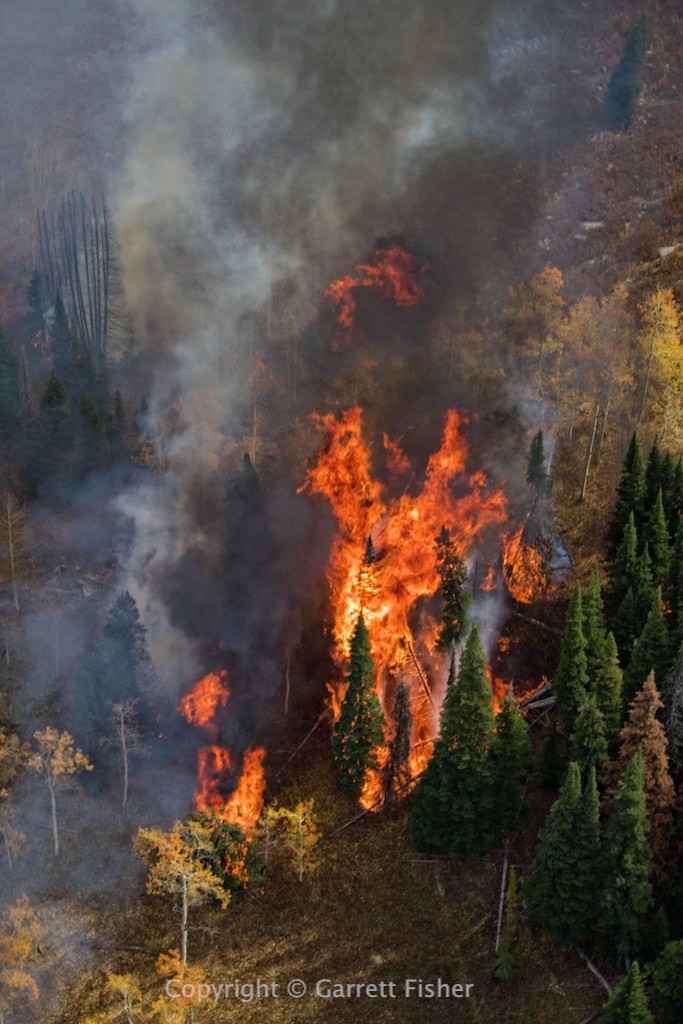 Maybe the Forest Service will find it beneficial to create an inferno out of this scene next year! 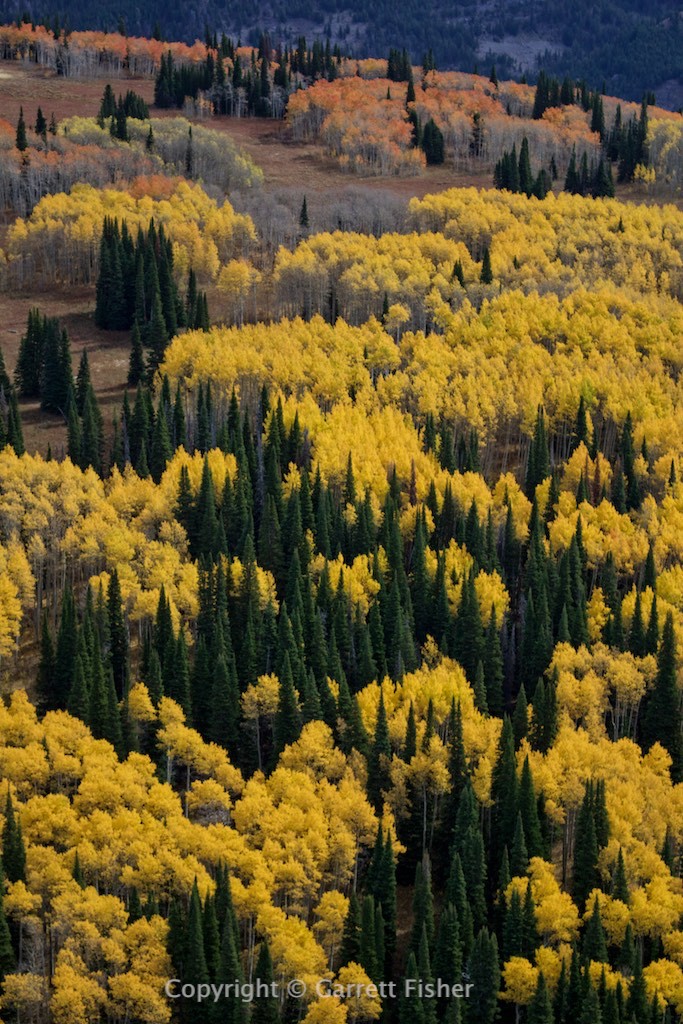