After completing the bulk of my work, it was time to fly home. I looked forward to a relatively simple flight from Kalispell to the Crazy Mountains in Montana, then direct to home. As I looked at the weather and where I was, I realized that I should just get the glaciers of the Absaroka Mountains while I was at it, then swing up the rest of the Yellowstone River, and be done with it. It just seemed that anytime I fantasized about coming up this way, I would just avoid it and not do it. No time like the present!

The Bob Marshall Wilderness was a real treat. Smoke was rolling in from the west, and it was funneling over one crest into the next range in odd ways, effectively painting a visual of wind currents that normally cannot be seen. Otherwise, the Wilderness Area was forlorn and lonesome, with no range to call Flight Service on the radio and not a single road to be found.

The Crazy Mountains are an odd set of terrain, a clump of glaciated peaks that open to the prairie on all sides, which just seems to be an unnatural mix. After that photo shoot, I pushed through a headwind as I headed to the Absarokas and Beartooth Mountains, containing the highest peaks in Montana.

Yet again, it was a test of will, as the terrain was harsh as can be and lacking entirely in civilization and access roads. Winds were strong through here, which is quite normal, as Yellowstone and the Snake River Plain funnel winds from the SW to this range, and then gravity pulls them into the Montana Prairie with a fury. Terrain elevation was up to 12,800’ above sea level.

After completing the glacier photographs, my fuel situation was a bit, shall we say, low, and I needed to decide where to go. I popped Gardiner, MT into my iPad: 58 nautical miles with a 30-knot headwind. Forget that. Big Timber, MT looked promising, though 37 nm away. Woltermann Memorial, in the middle of nowhere, was the closest. I began to go in that direction until I saw on the facility directory that one has to call someone upon landing and wait an indeterminate amount of time until somebody bothers to show up. So I diverted to Big Timber.

Of course, once I get to the point where Woltermann is no longer an option, the headwinds kick up. Over the mountains, it was a tailwind in this direction. Down low, and it’s a howling headwind! I got shafted in both directions! Sigh….

As I got within range, I called the airport Unicom as automated weather was out. “Oh, its 10 to 15 knots down the runway.” Perfect! On final approach, the windsock was 90 degree crosswind, sticking straight out, with the airplane cocked 30 degrees to the right to fly straight. I have been through this before. I added power, flew 20 feet above the ground, came around some buildings, landed in a field off the runway into the wind, and taxied to the fuel area. After “the Nebraska incident,” I have learned one must take control of prairie wind. It’s relentless and merciless.

As I went West, the winds calmed down quite a bit, and I flew up the Paradise Valley of Montana into Yellowstone. I hoped to make Jackson for fuel. Weather observations indicated howling wind out of the SW all along the Snake River Plain, in Idaho, west over Yellowstone Lake, and light south in Jackson. Reality? 30-knot southerly wind in central Yellowstone. I could risk landing in Grand Teton National Park with no fuel, or divert to West Yellowstone, Montana. I opted to divert.

Winds were 10 knots gusting 16 knots down the runway at WYS when I took off at Big Timber. Now per automated weather, they were 16 knots gusting 26 knots, ranging from 10 to 50 degree crosswind! What the hell? I called Unicom to inquire about landing in a sagebrush field, and they had “no information” as to the condition of the field. I landed on a diagonal among the sagebrush at the approach end of the airport, taxied on to the runway, and pulled off the first taxiway area.

The flight home was slow, due to headwinds, and when I rounded the bend at Pine Creek Pass, Idaho, wind was a few knots behind me. At this point, I was literally feeling uneasy in the stomach, after 17 hours of straight glacier, high wind, and high mountain peak flying. Enough was enough, the brain can only handle so much! Alpine automated weather was inoperative, and I got a wind report from a fellow pilot: calm. It was almost insulting that the last two landings were in a hurricane, though I must say, it was a fine landing when the brain is veritable mush. Its ironic that I fooled myself into thinking that today would be easy. 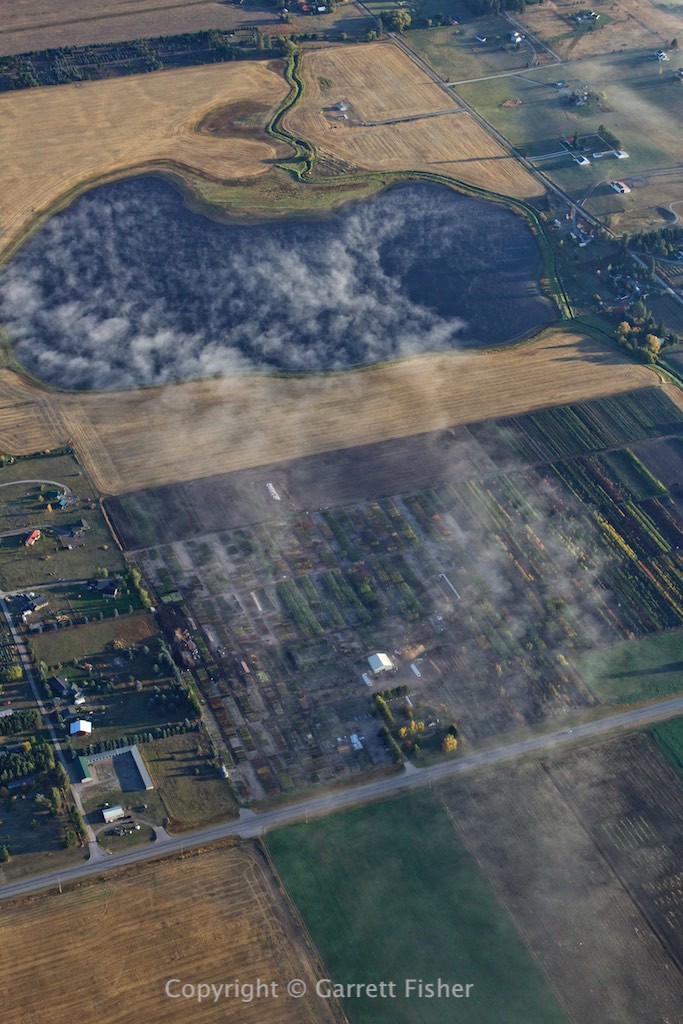 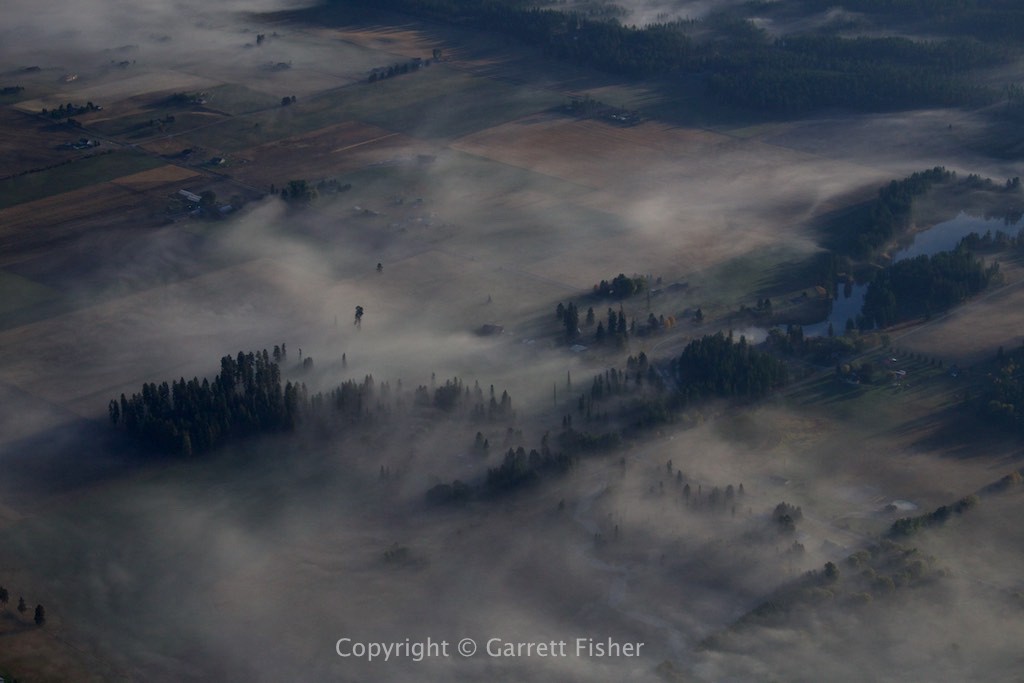 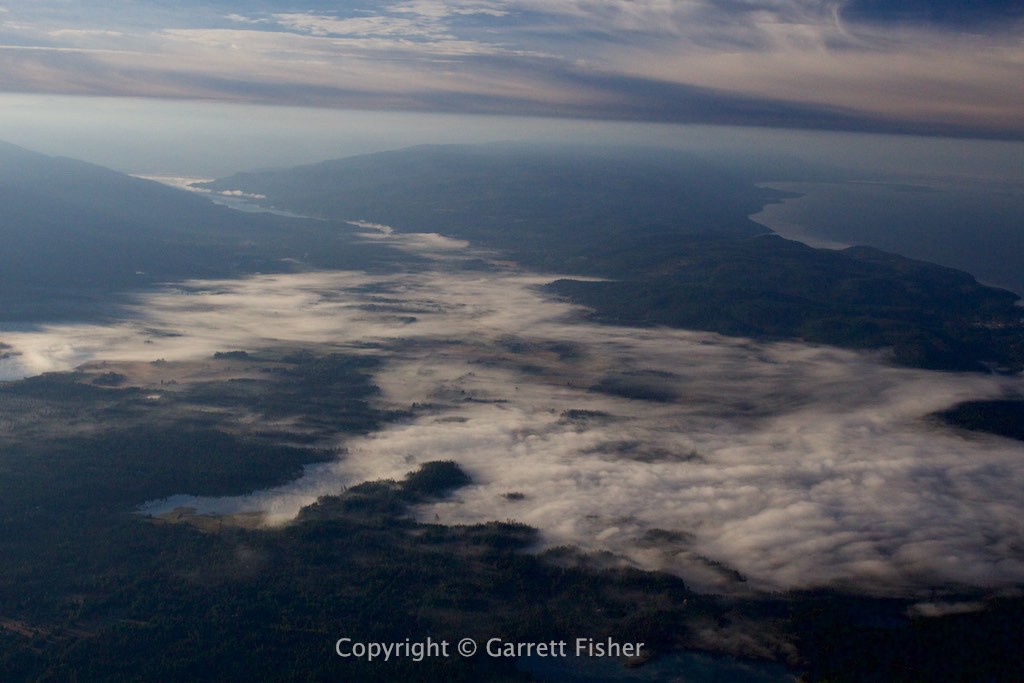 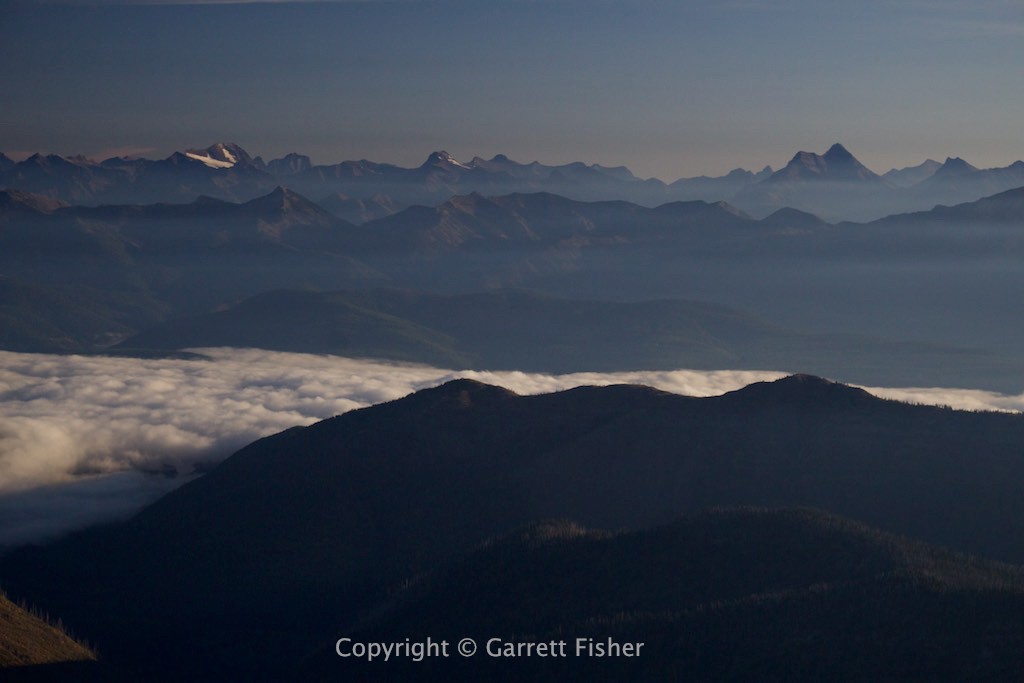 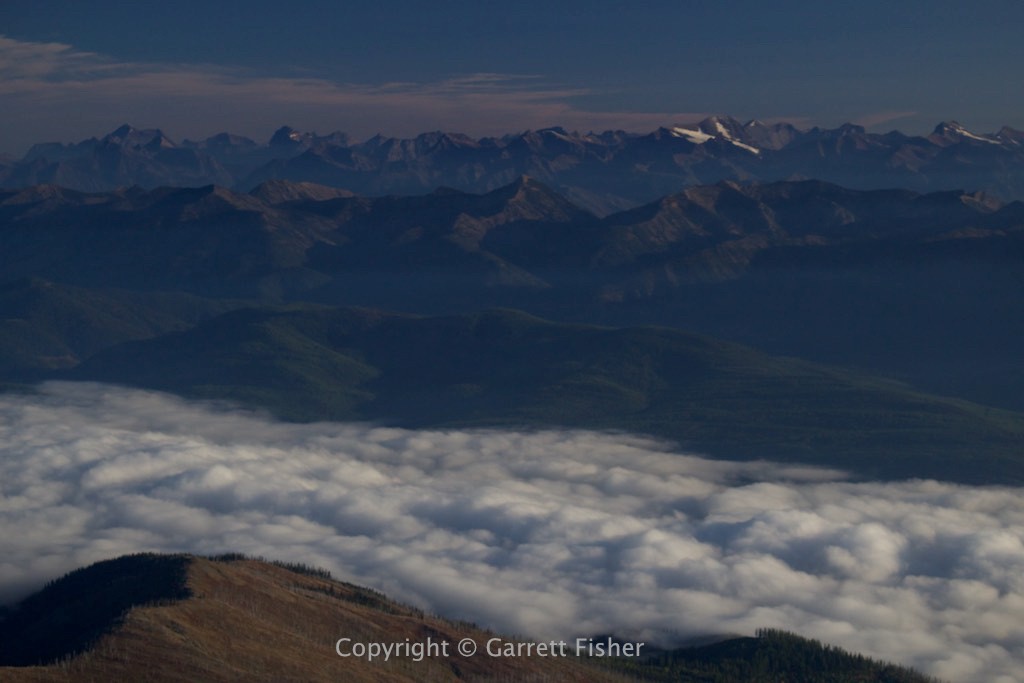 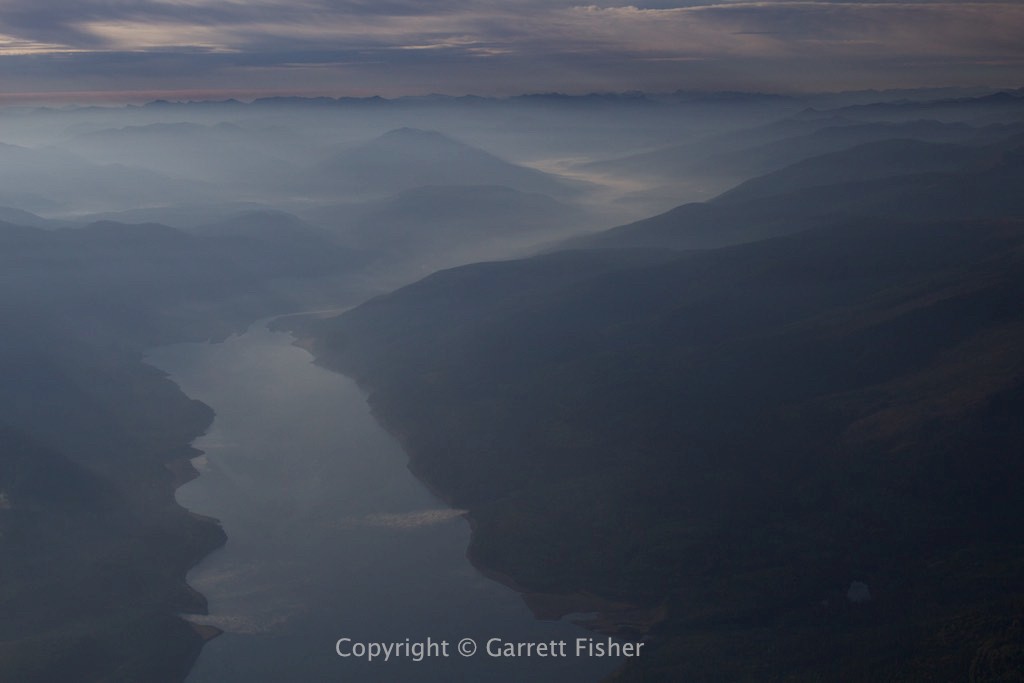 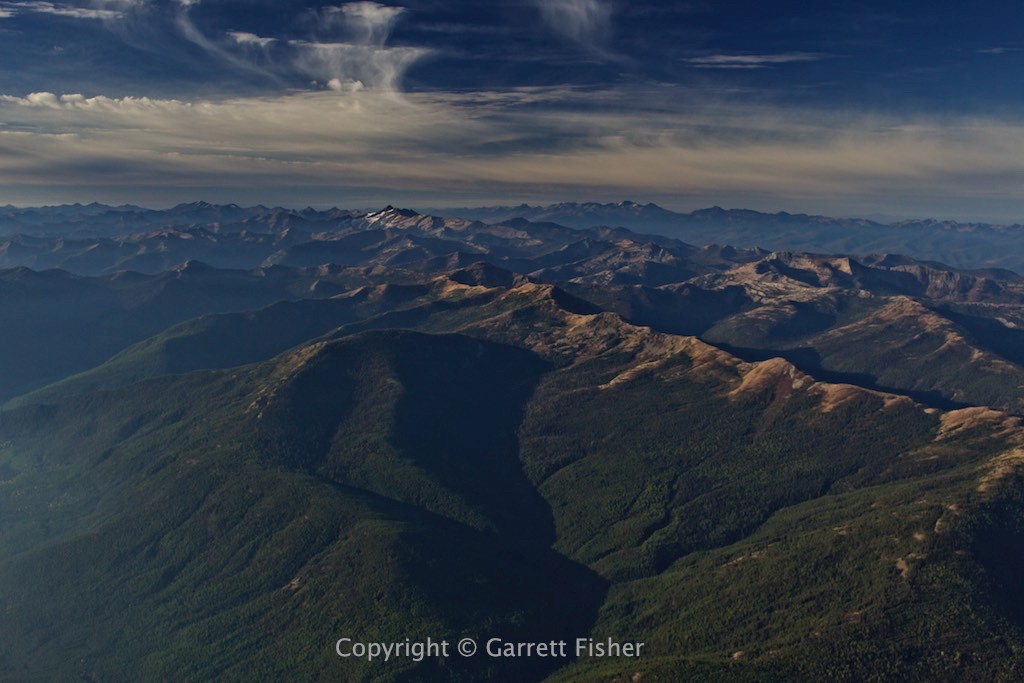 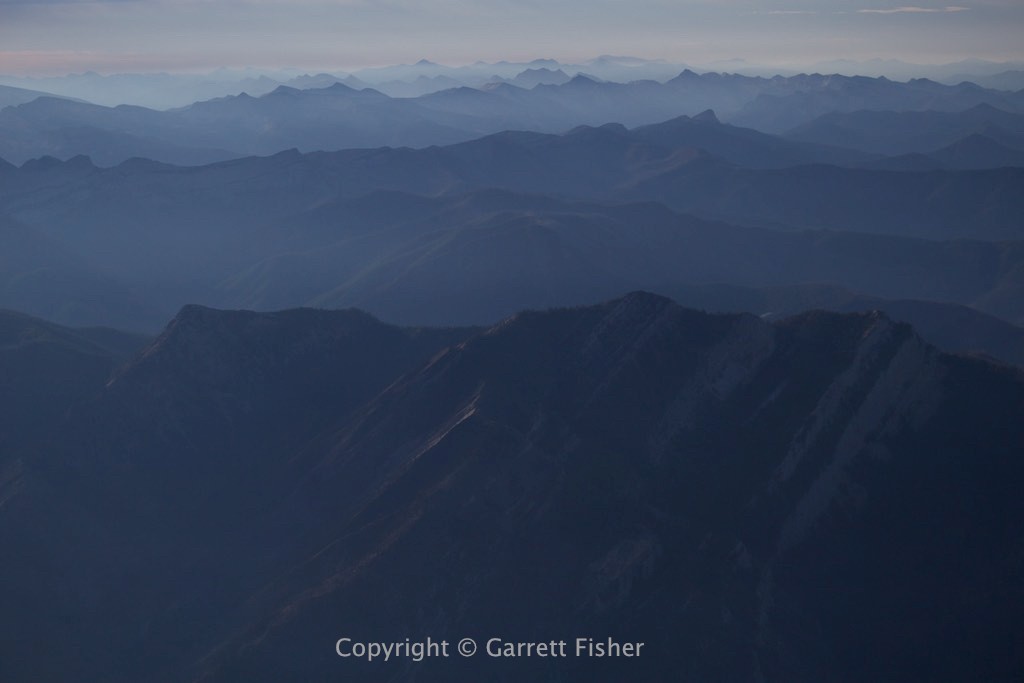 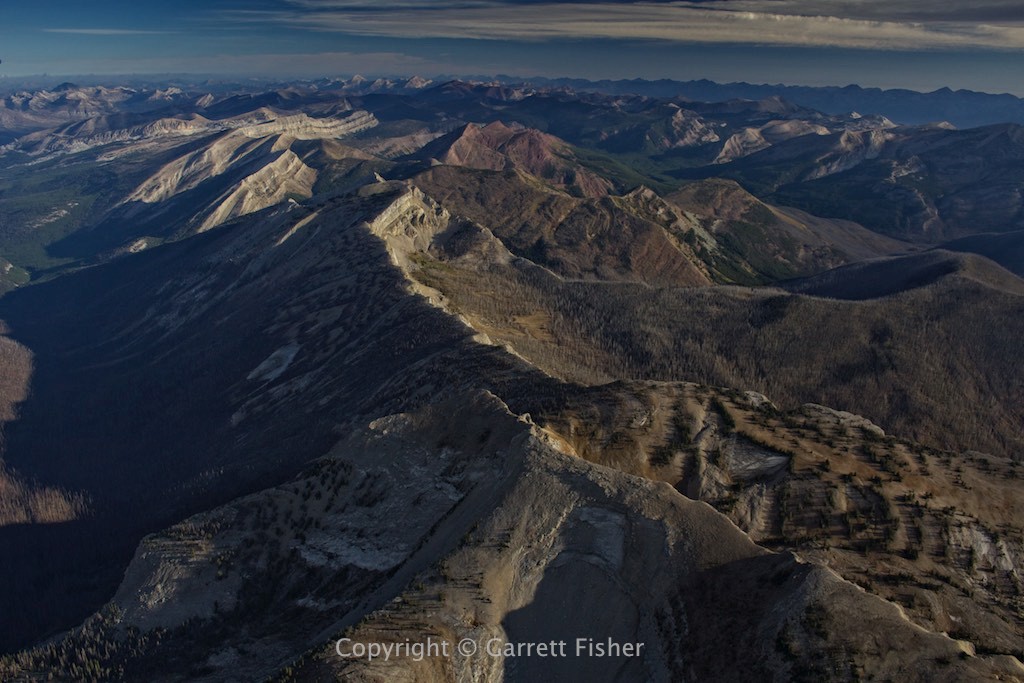 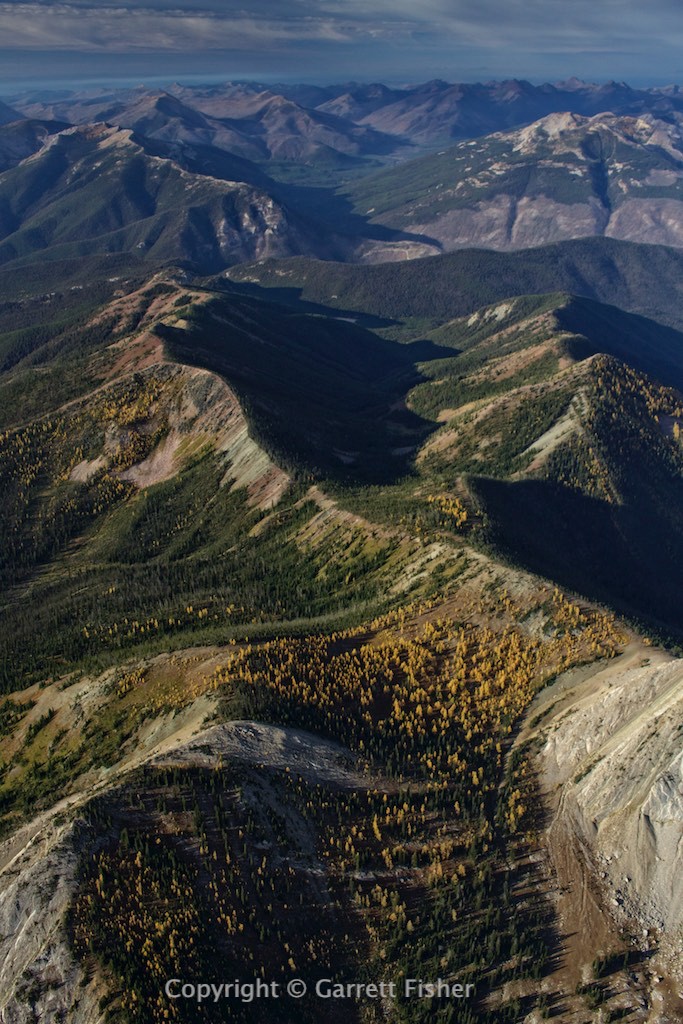 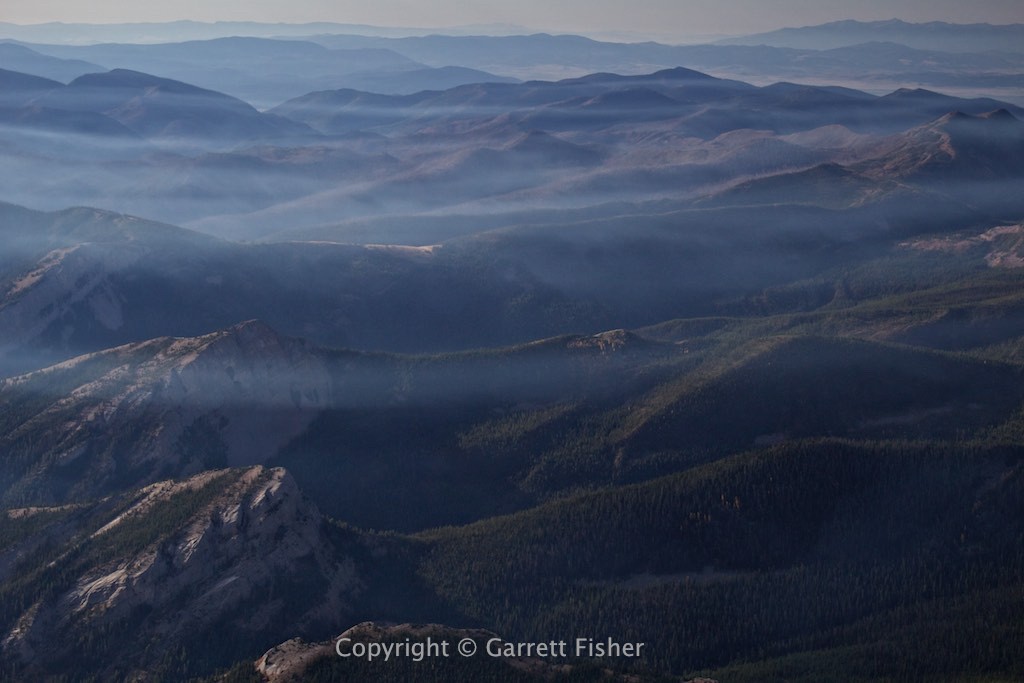 Smoke funneling through the range with larch trees 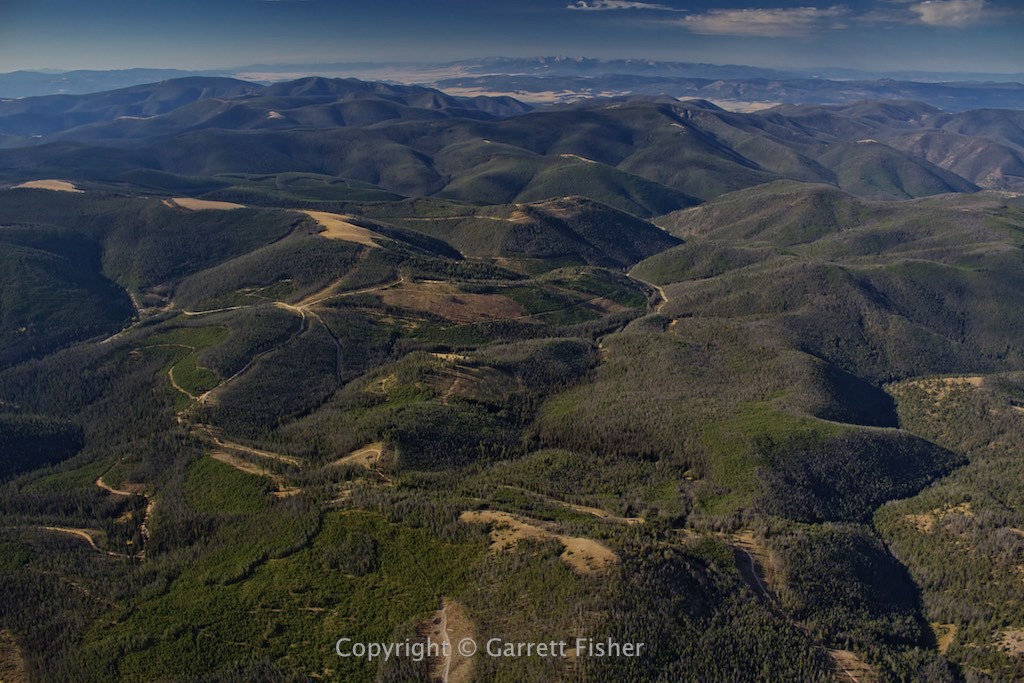 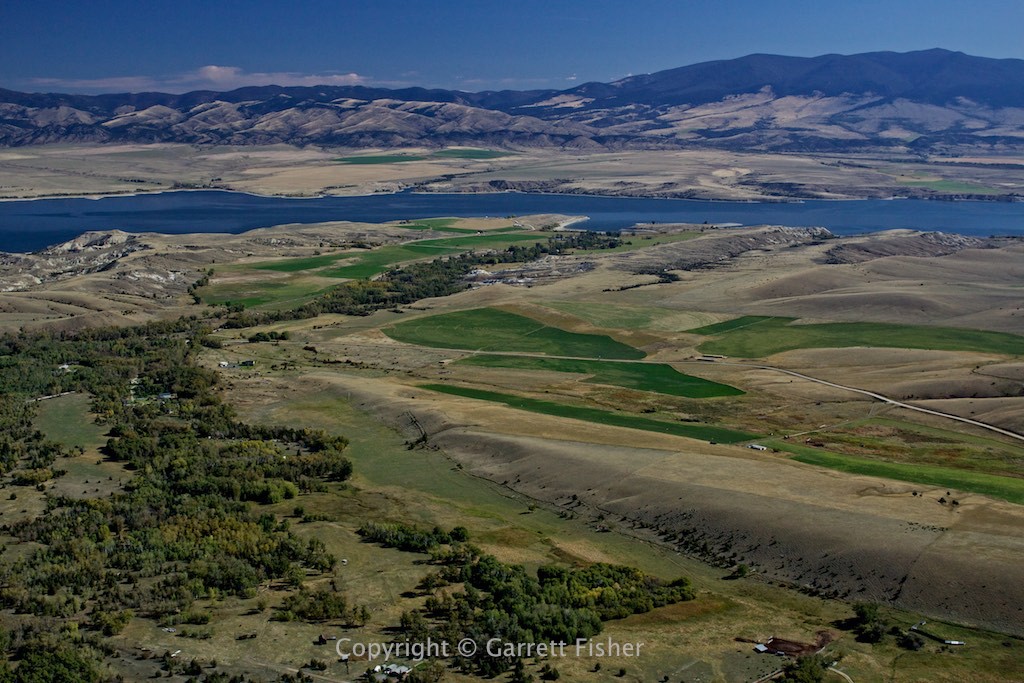 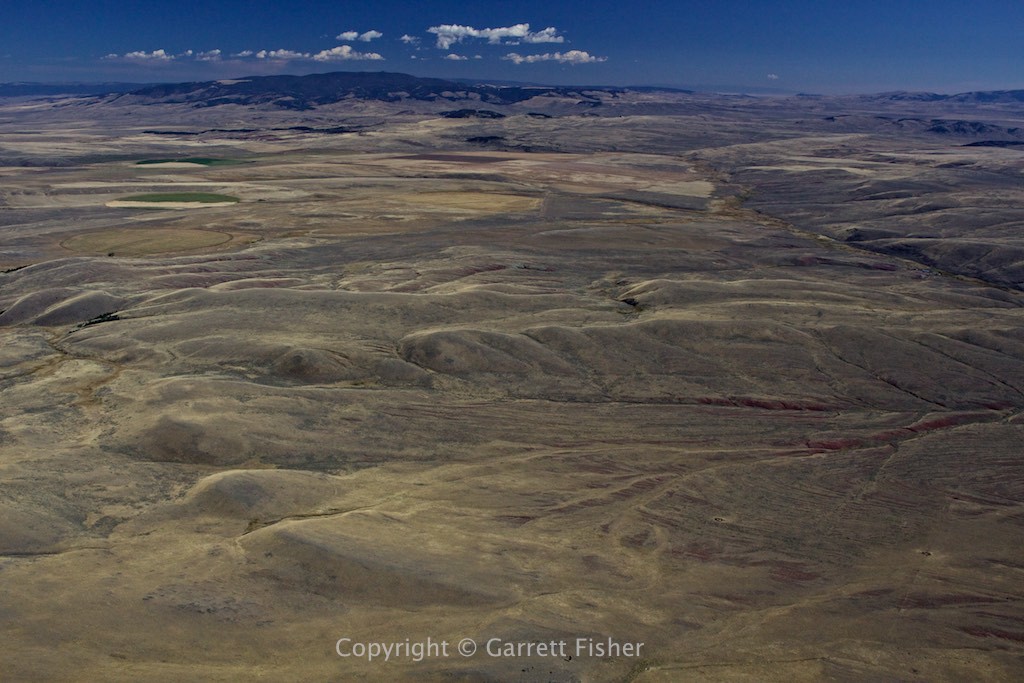 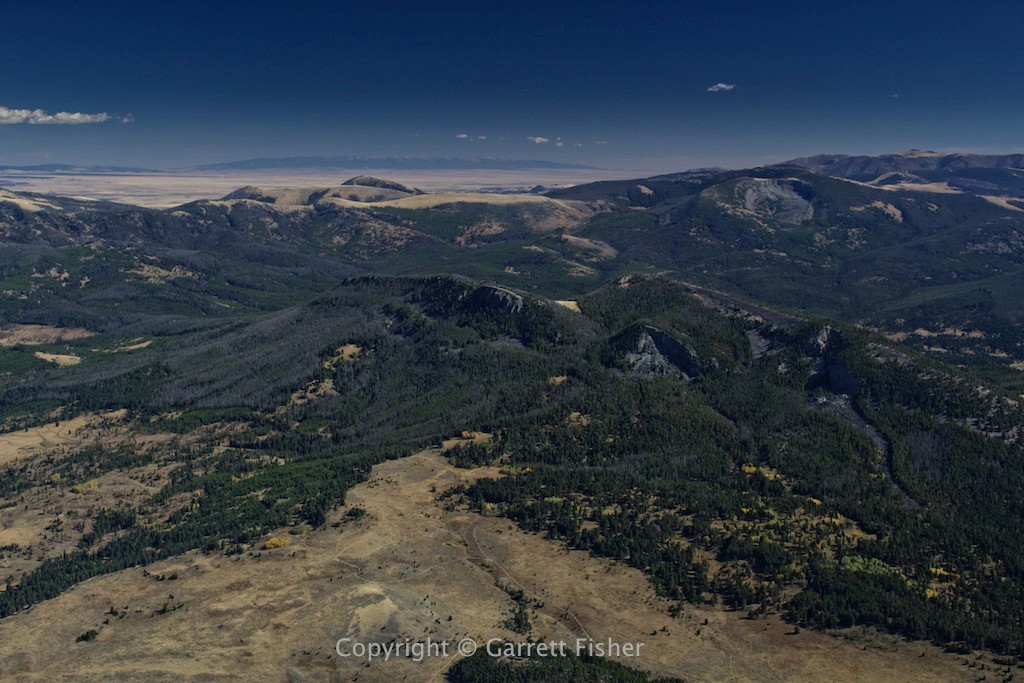 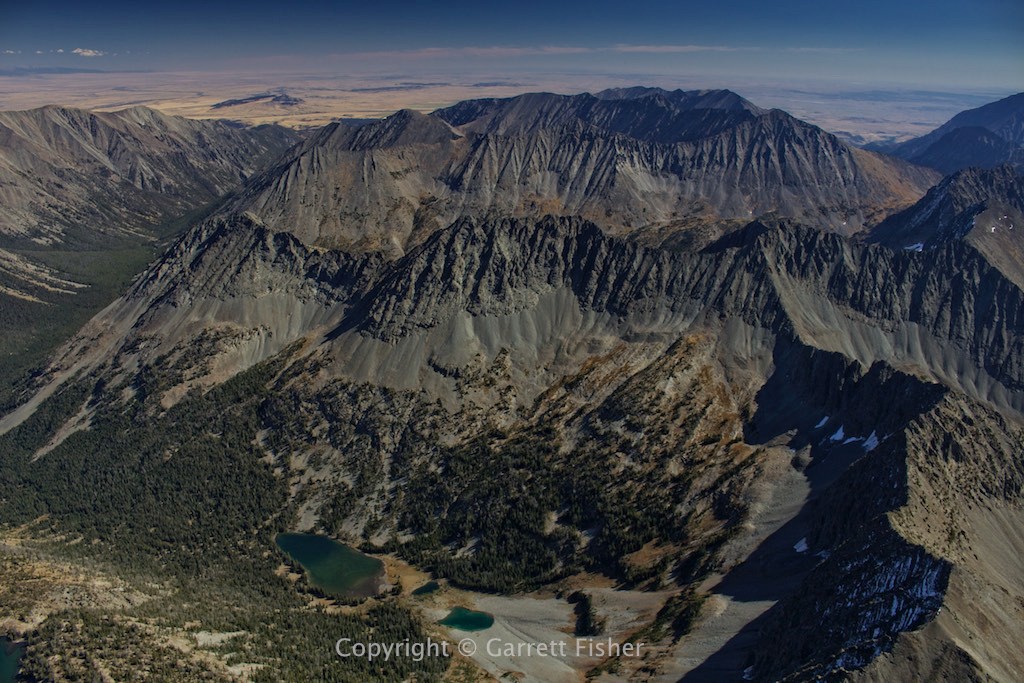 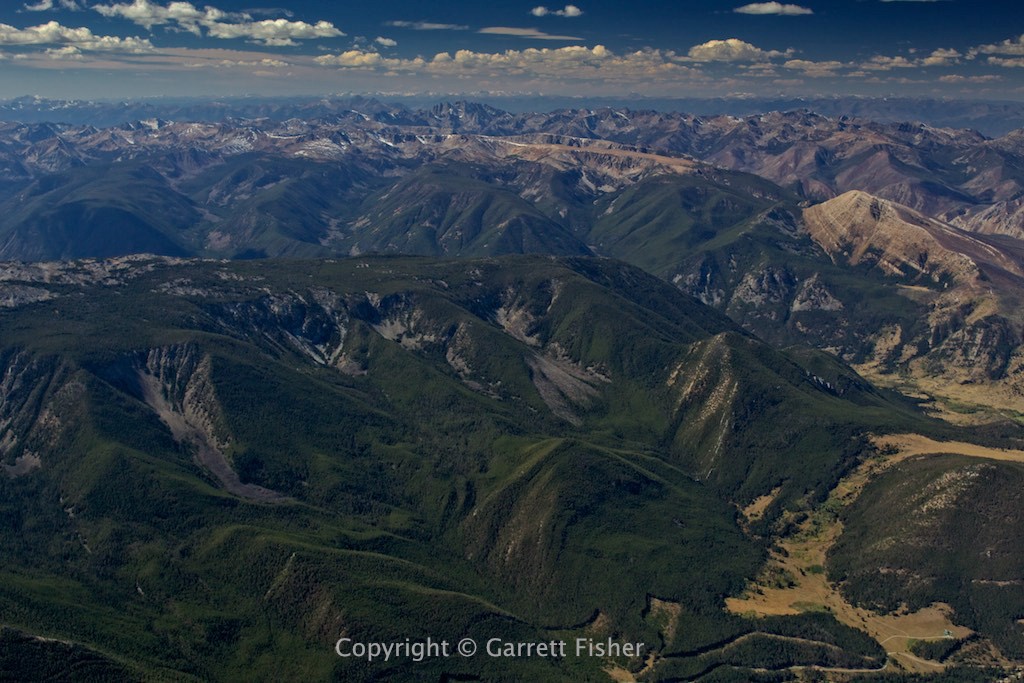 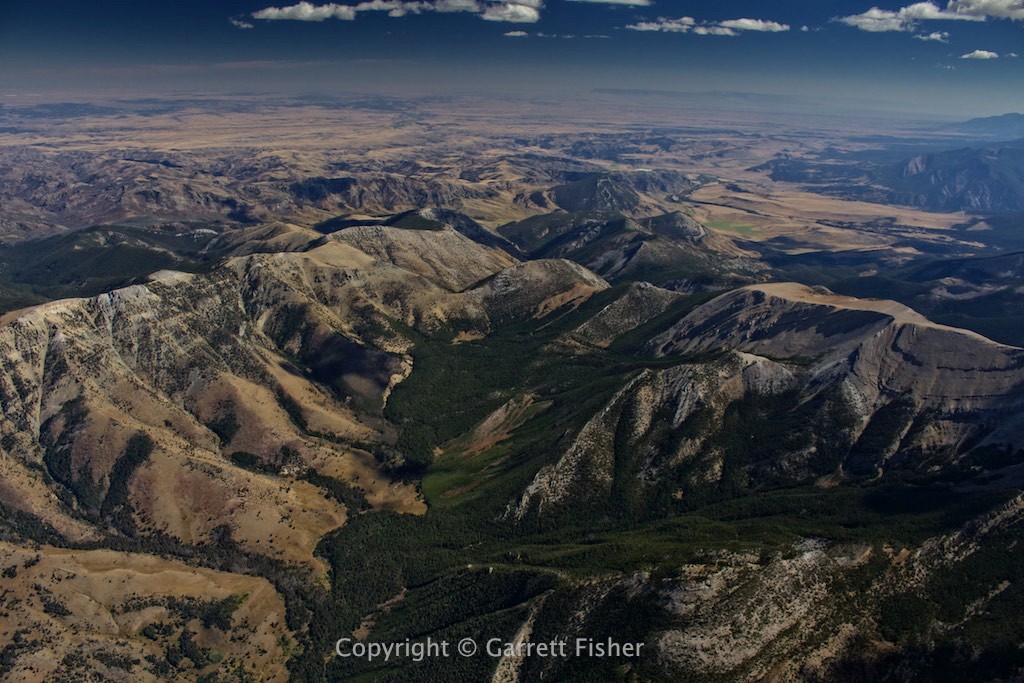 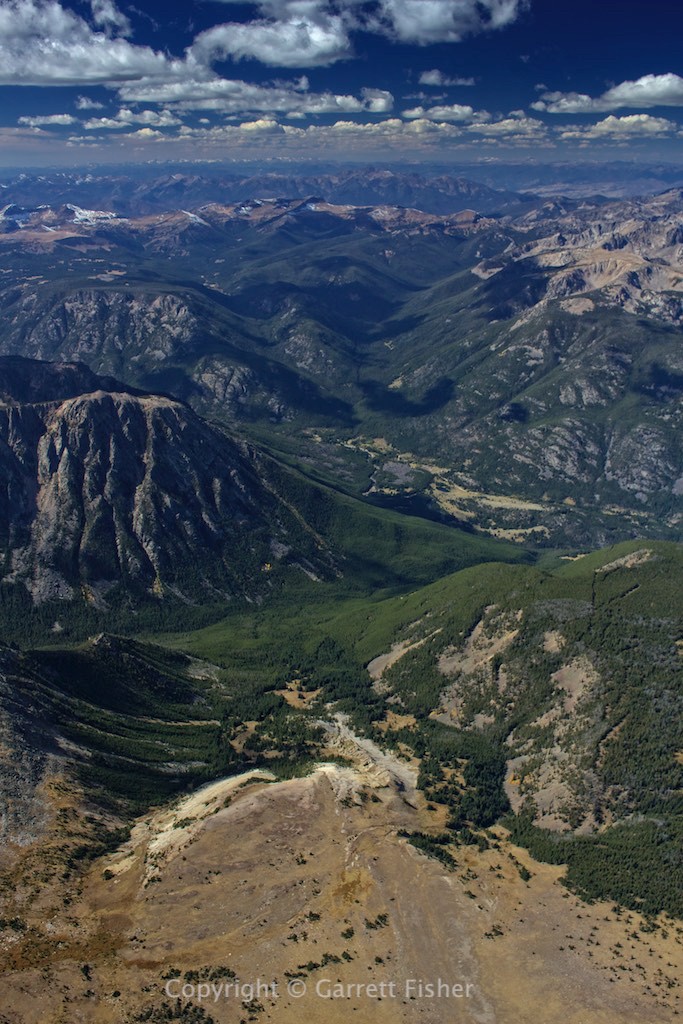 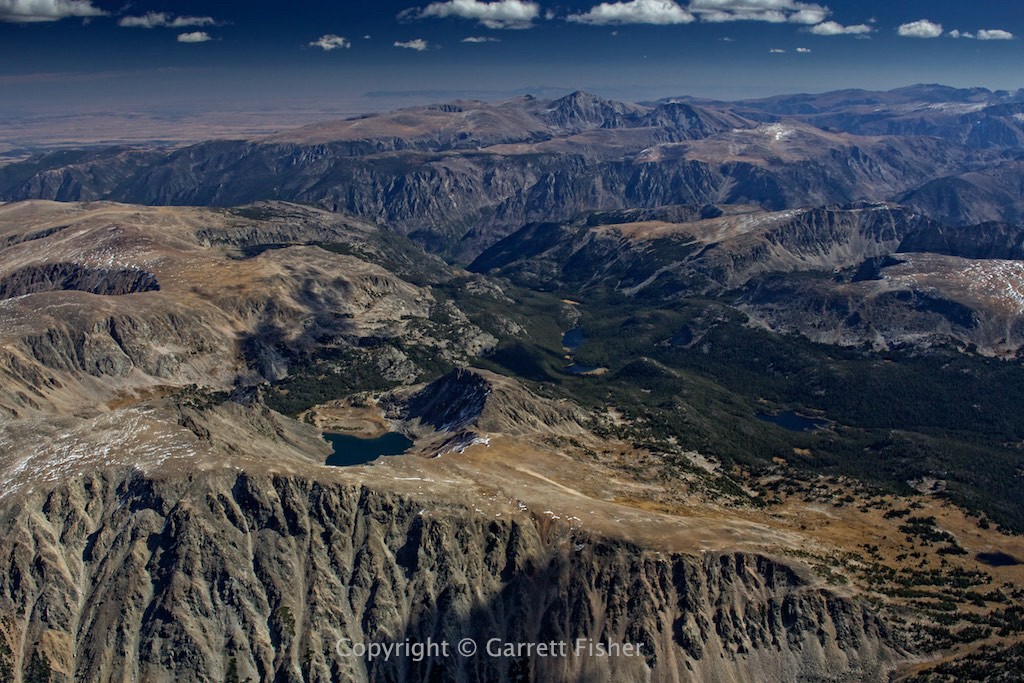 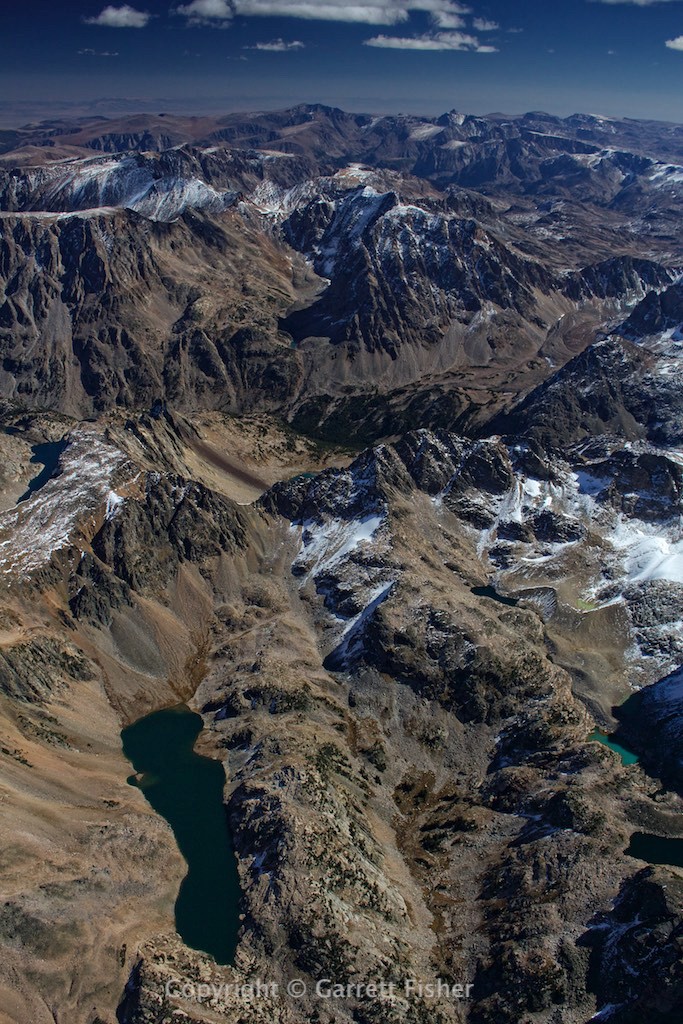 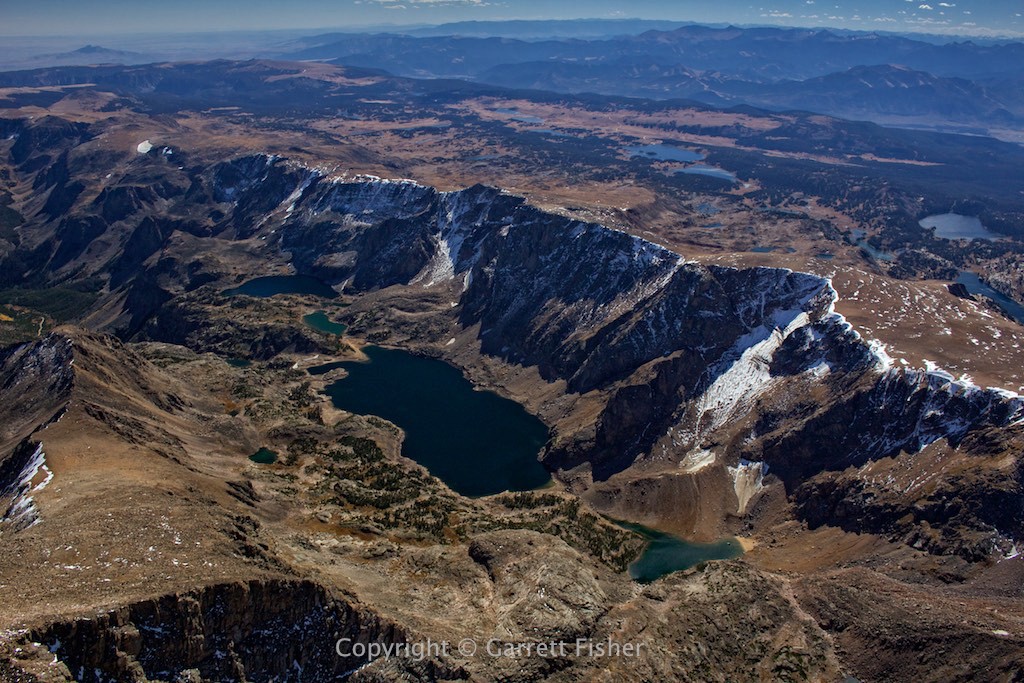 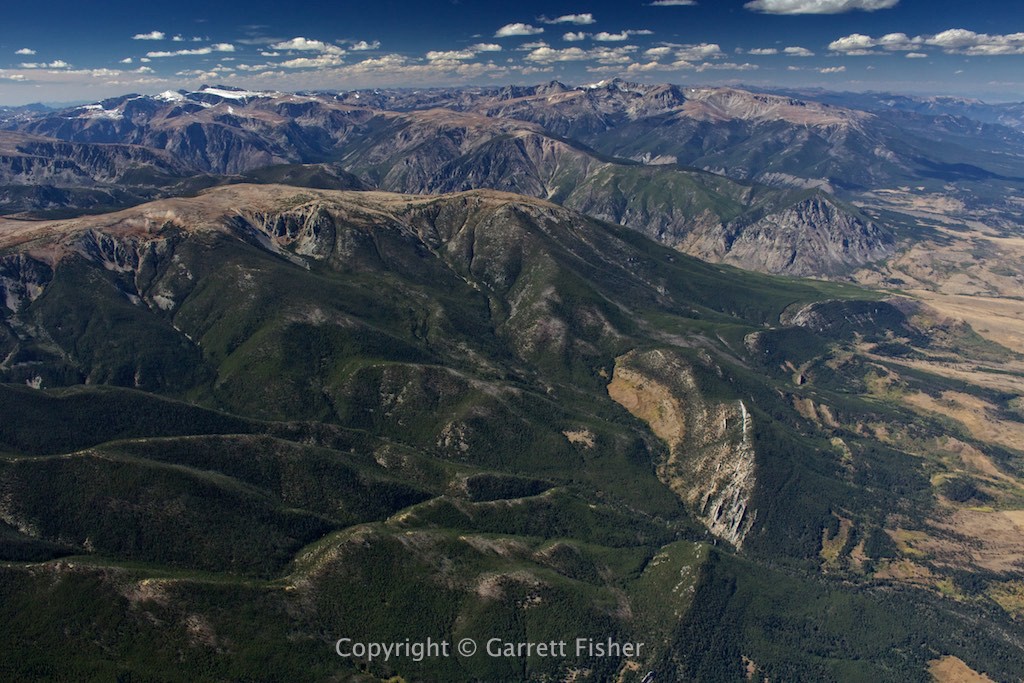 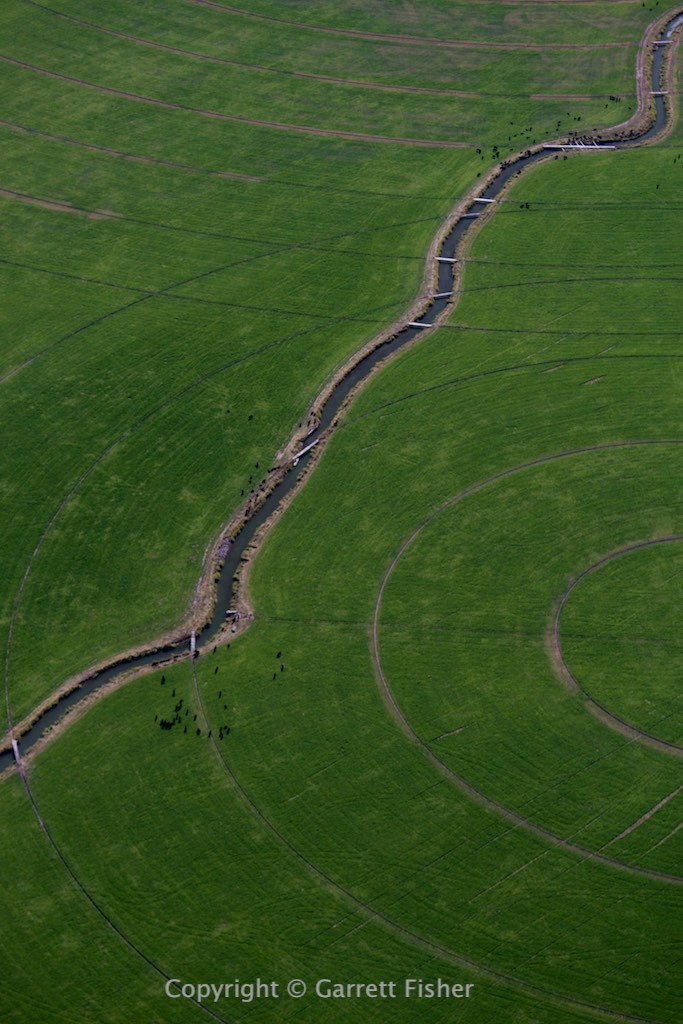 Paradise Valley, MT – Maybe they were on to something with the name. 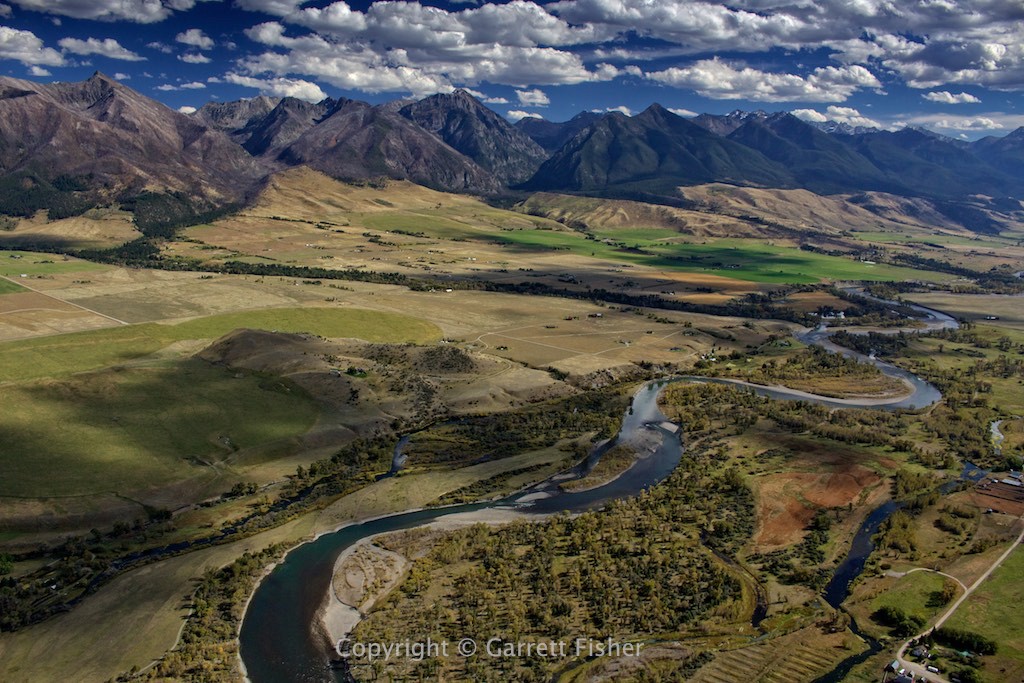 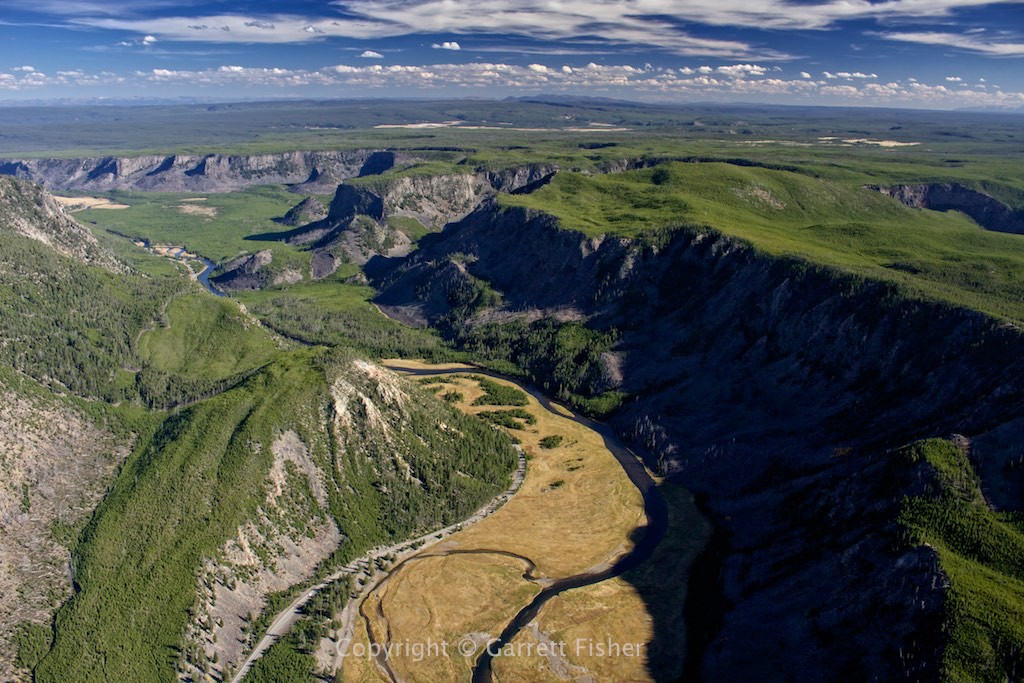 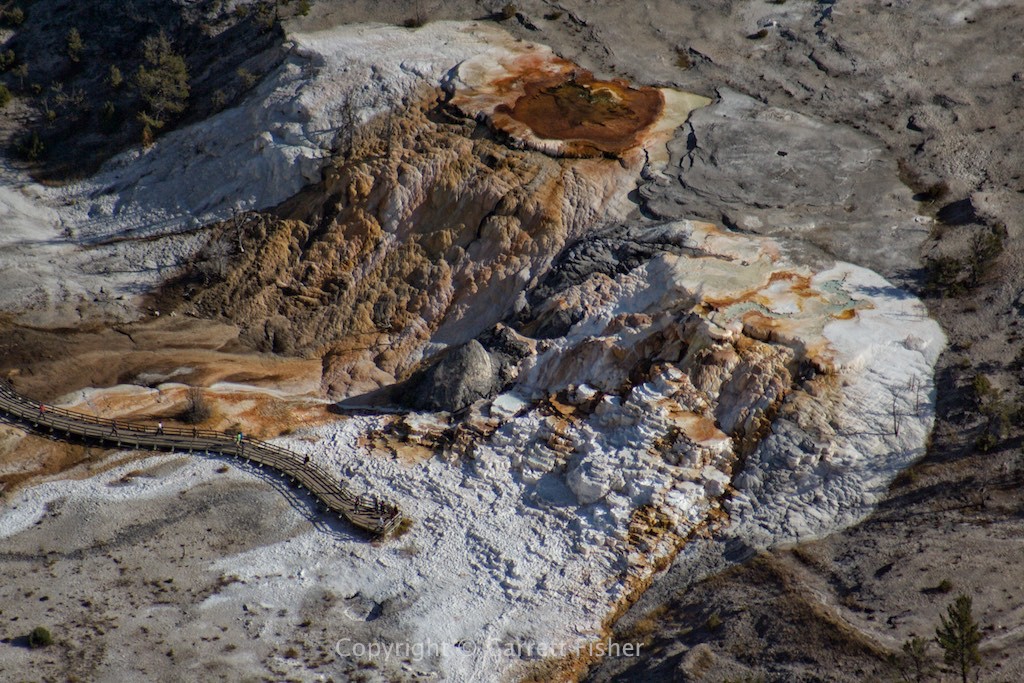 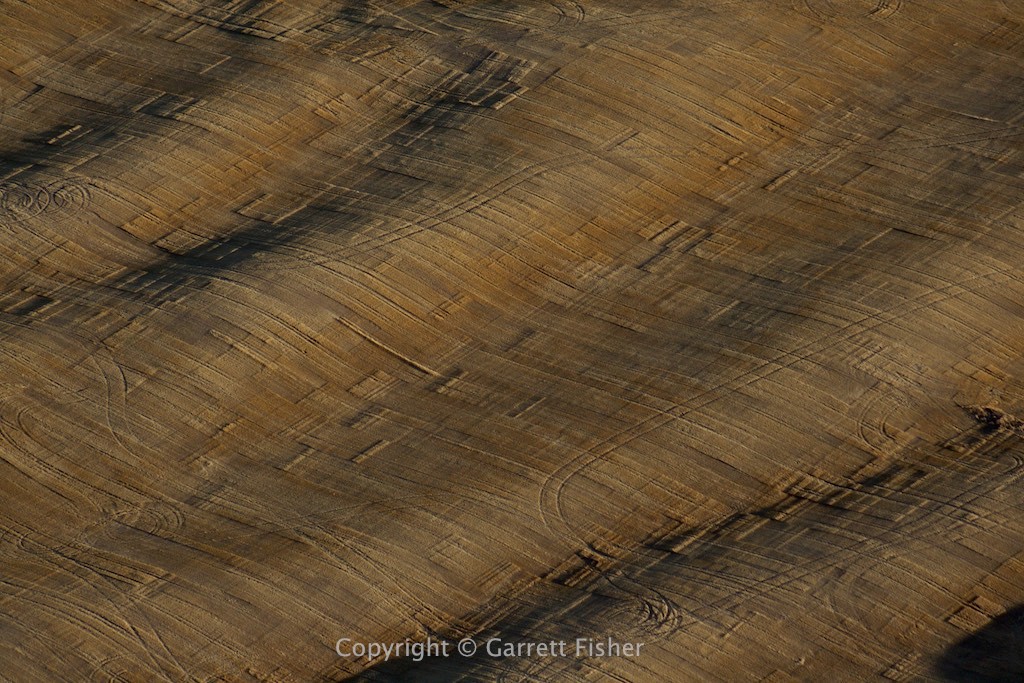