48 hours after landing from my binge flight to Colorado, it became apparent that we needed to go to Idaho Falls for a grocery run. It’s a monthly event that surfaces at perpetually inconvenient times. 75 miles each way – mostly two lane with idiotic drivers – it’s a real pain in the rear to drive, so I decided to fly. Running the numbers, its exactly the same amount of time to land at Idaho Falls Regional and drive the courtesy car, with an additional $9 in fuel and a ton more brain power required. That aside, its an excuse to fly. You know, “so the engine doesn’t rust”….. in two days.

As soon as I sat in the airplane, it was evident that my ass still hurts from the Colorado flight. The seat was designed in 1945 (read: simplistic, hard, uncomfortable, and not updated since then), and the ensuing pain is typical of what you’d hear a Depression era grandparent talk about when he or she “walked 5 miles in a blizzard uphill both ways to school. Now quit being a wimp!”

The flight over, although sunny and light winds, was bumpy as can be, which was not fun. With a sore ass, and still a sore mind, here I am getting the crap beaten out of me by the weather, for no good reason. Thankfully, it abated approaching the Snake River Plain in Idaho, where I got photographs of farm fields next to lava fields. Yes, lava fields derived from ‘liquid hot magma’ sits next to potatoes and other traditional Idaho agrarian regalia. Quite a contrast.

The flight home involved going through the windmills east of Idaho Falls. Given their small width, it’s easy to assume they can be flown around with ease, though the giant spinning blades pose some bit of a challenge as they take up more space than is apparent from a brief glance. I had to make sure not to go Don Quixote and fly into one of them. The last bit passing through the lower Swan Valley showed wheat fields in harvest, quite a golden contrast to the lime green I photographed in the same place in June.

Caribou Highlands – inexplicably obscene turbulence for such a tranquil scene…. 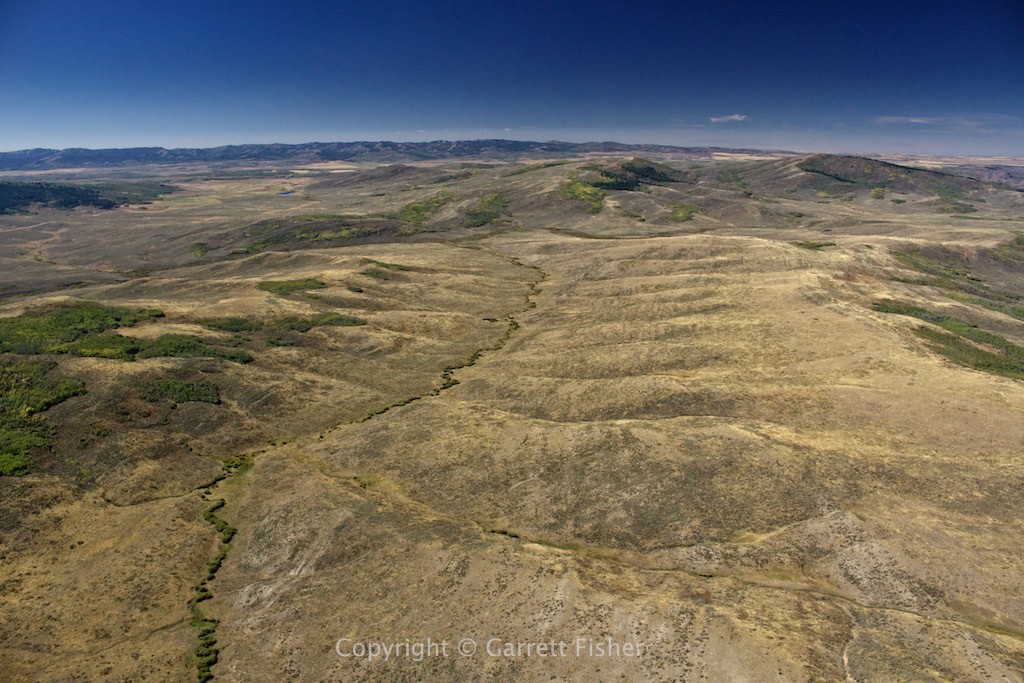 Caribou Highlands with Snake River Plain in the background. This is where your Idaho potatoes come from. 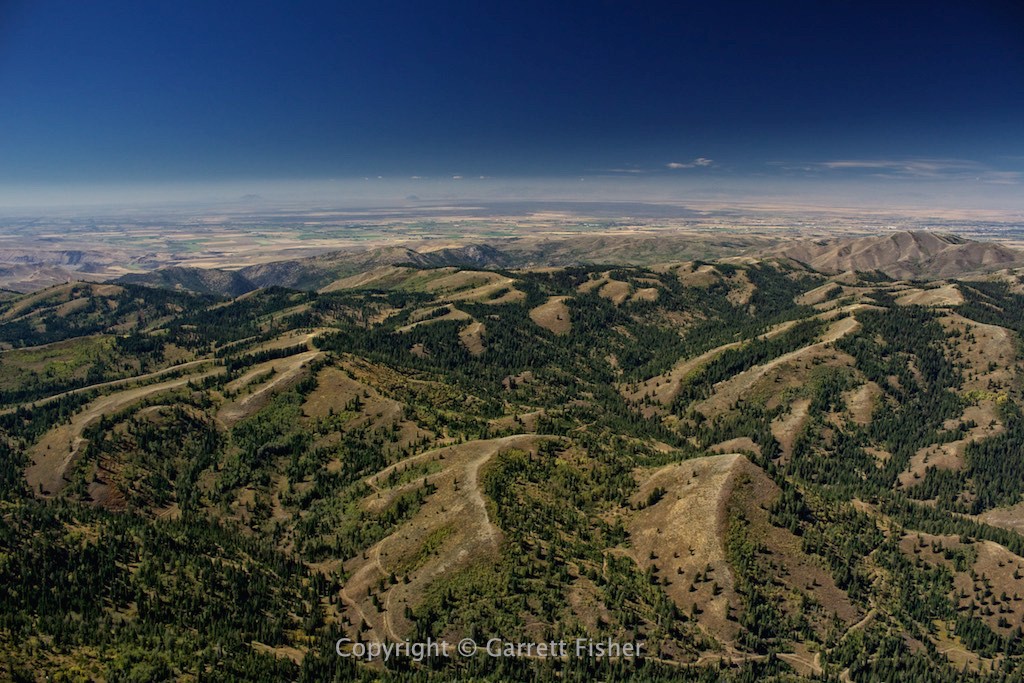 Fields and lava fields side by side. 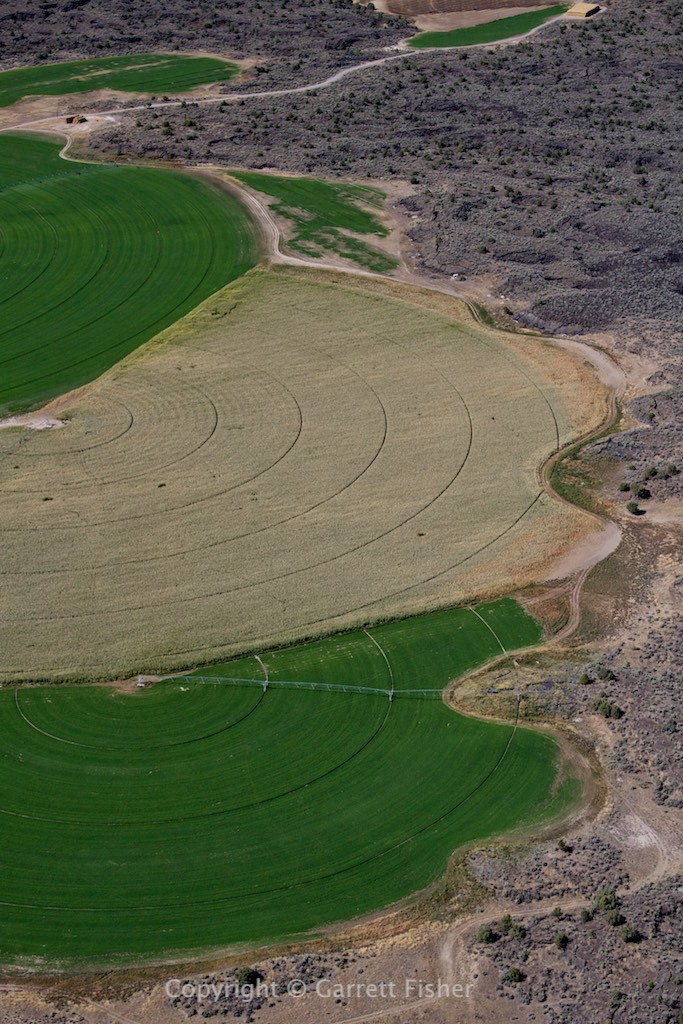 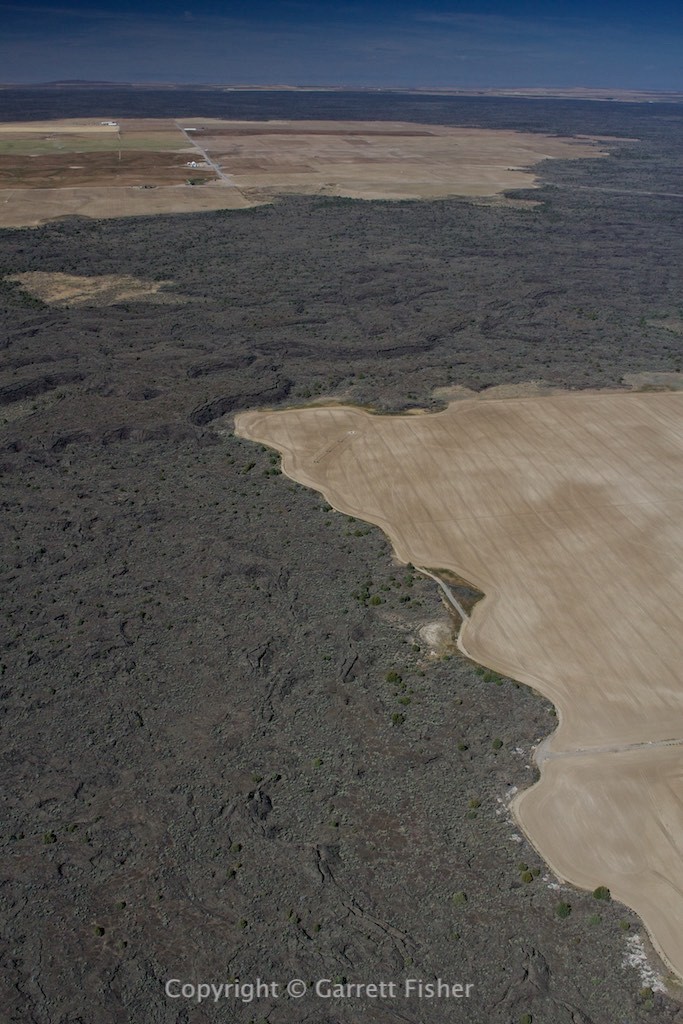 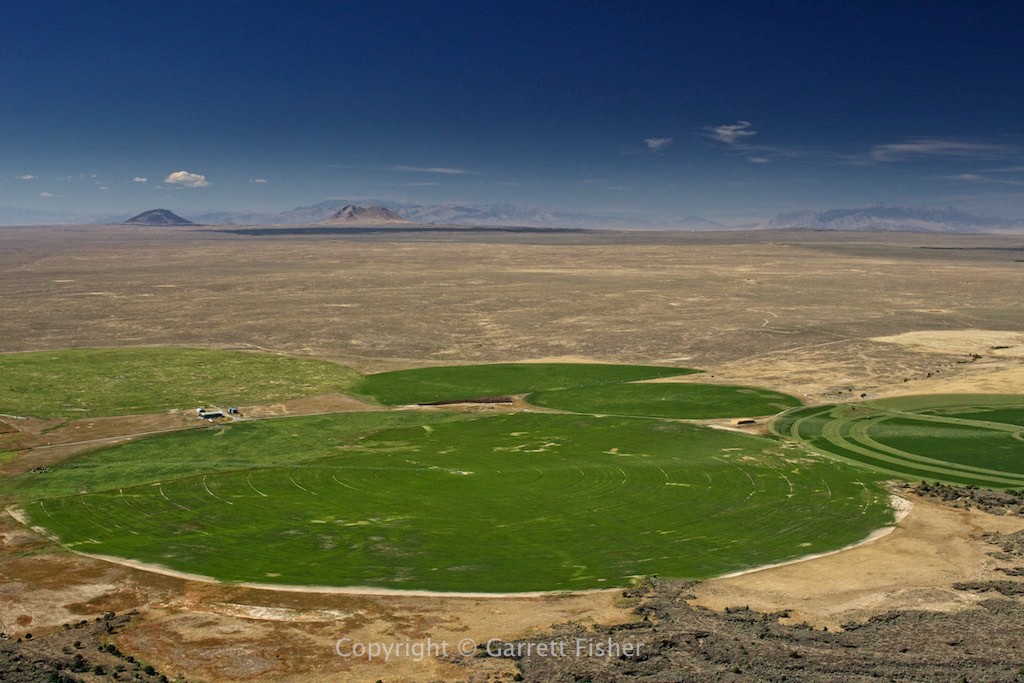 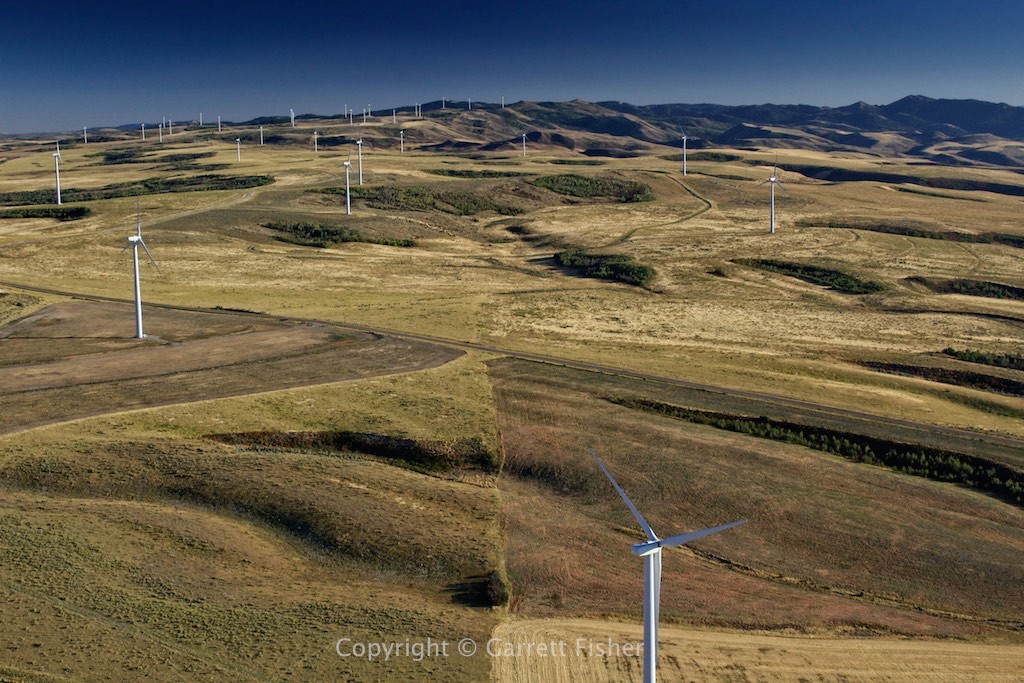 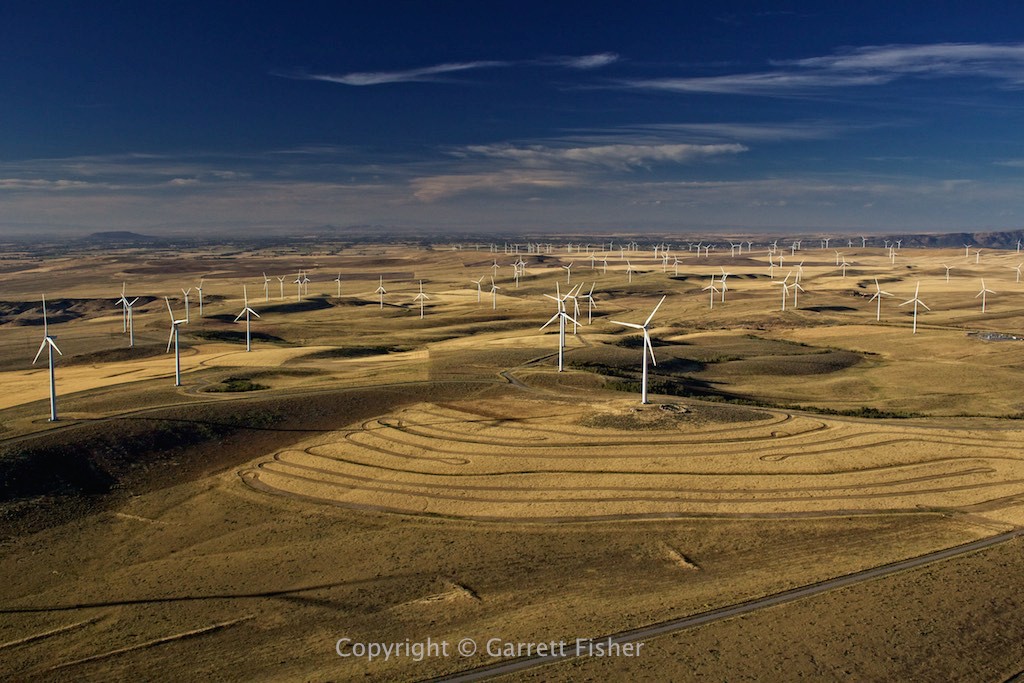 The highway en route to Idaho Falls comes through here. Despite its apparent beauty, its gets old so I flew instead.

While I found this photo beautiful, I wonder if the farmer hates his job. “All I do is drive around in circles all day…” 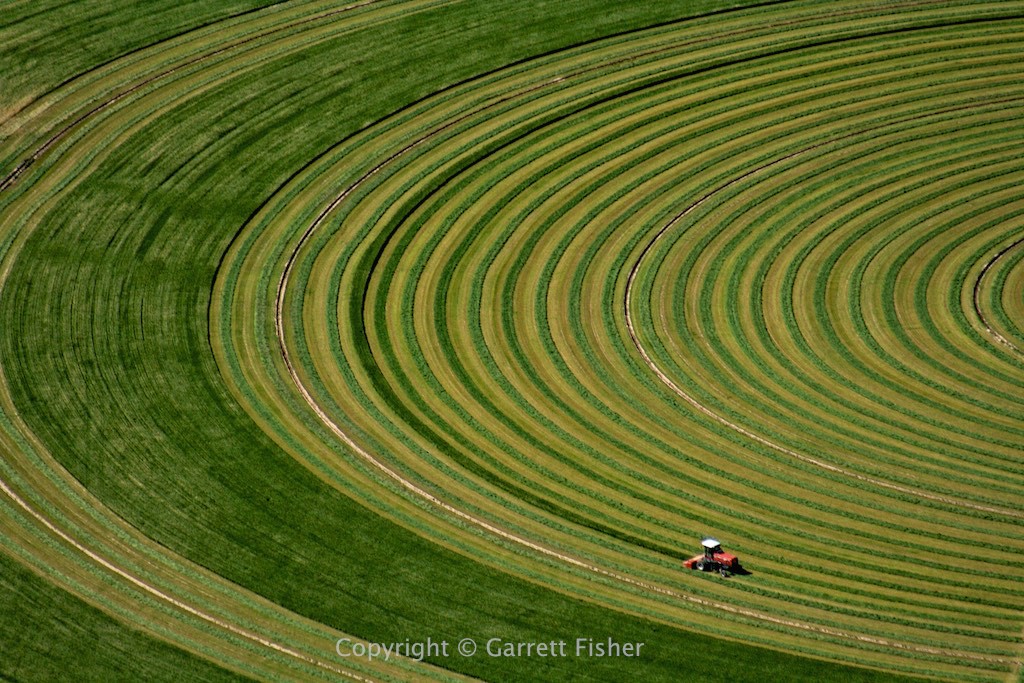 More lava fields. I have resorted to operating two cameras simultaneously (one with zoom, one without) and they don’t sequence images properly.