One of the conflicts with aerial photography is that sometimes the image looks better than reality. In the case of smog (“haze” as Germans call it), the visual experience is something that irks me extensively, and I can’t imagine how any of it could be worth taking pictures of. In reality, haze only affects the horizon portion of the image, not the foreground, and not the sky. Coincidentally, the horizon is the farthest away and has the least detail, so the opacity isn’t nearly as damaging as it seems to be when I go flying.

Thus, there was a day that was hazier than I would have liked; however, I needed to prove what the reality would be. Namely, when I see haze from my office window on the distant hills, how does that translate into actual imagery?

It turns out, wide-angle images aren’t overly degraded, though they lack a clarity that I am looking for. Everything else is unaffected.

This particular flight went west over the Rhein into the Rheinhessen wine region, which is an expansive area of rolling hills covered in vineyards and farm fields and windmills. There are some villages, few trees, and quite a bit of scenery. Compared to what I can find on satellite imagery, it is the largest area of its type in Germany, as other areas have something in the way of trees to break up the wide expanses. 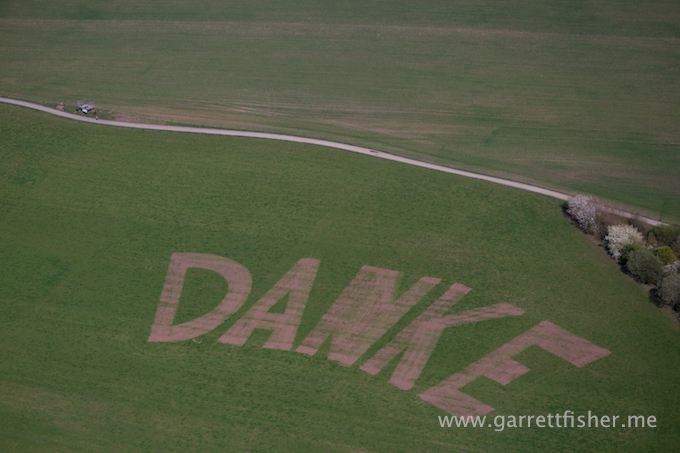 Satellite facilities amongst farm fields. Very German. There is no shortage of odd things as seen from the air. 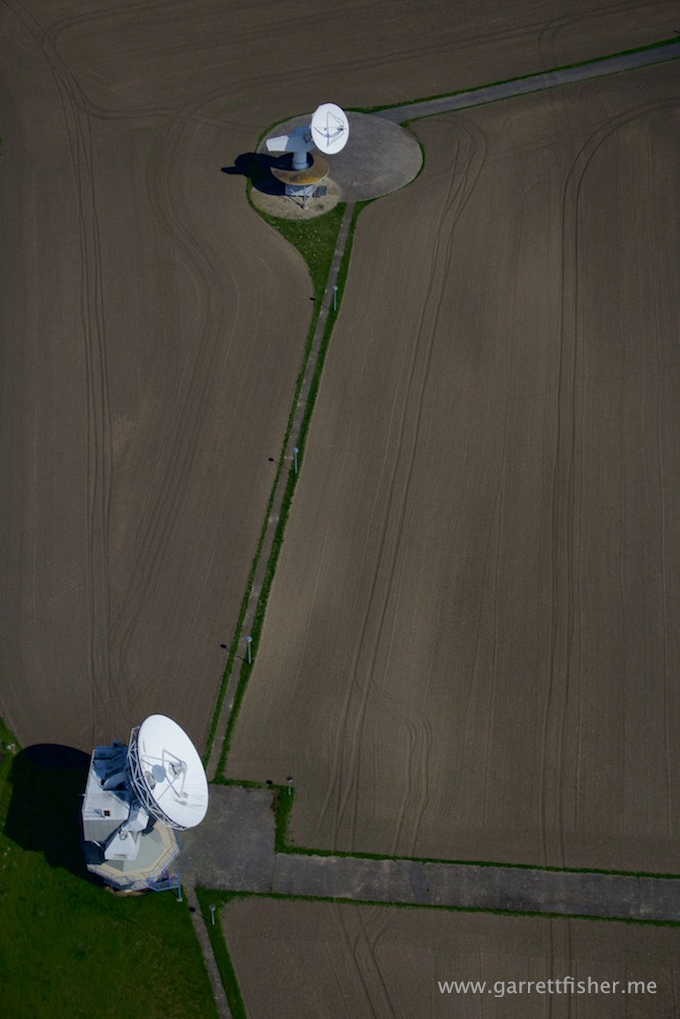 Rhein River levee. Germans turn it into walking paths. In America, there would be fences around it to prevent terrorism, with signs threatening 25 year prison sentences for trespassing. 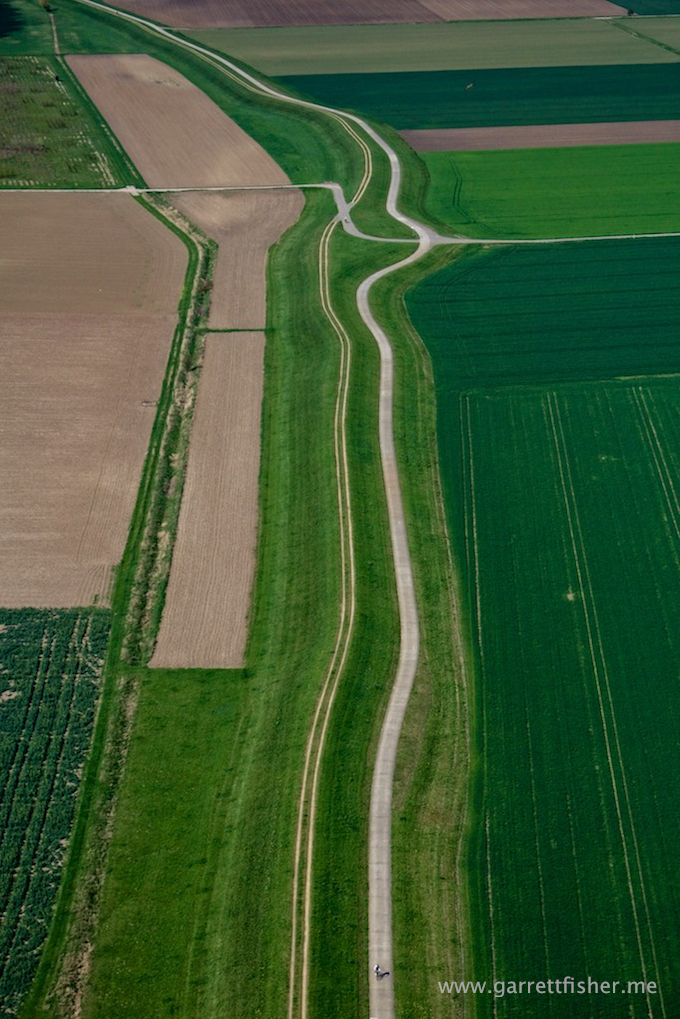 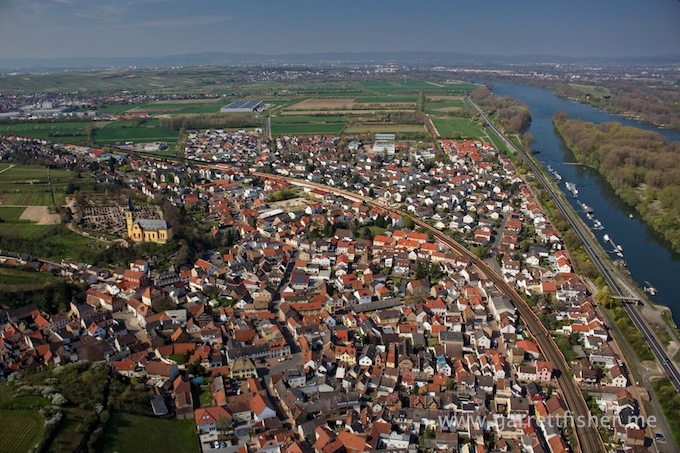 These are fields with roads. 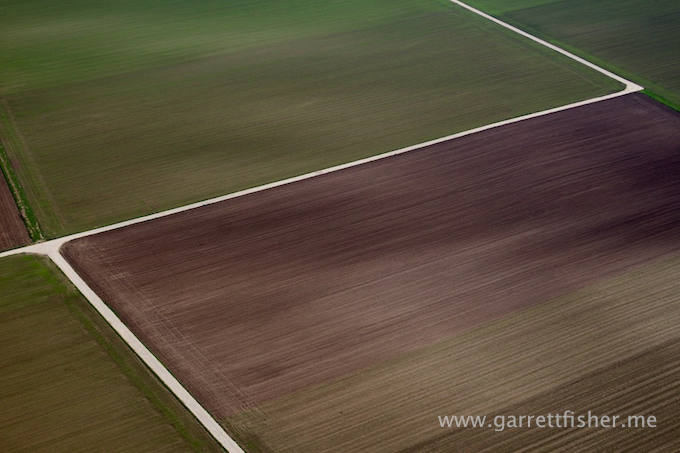 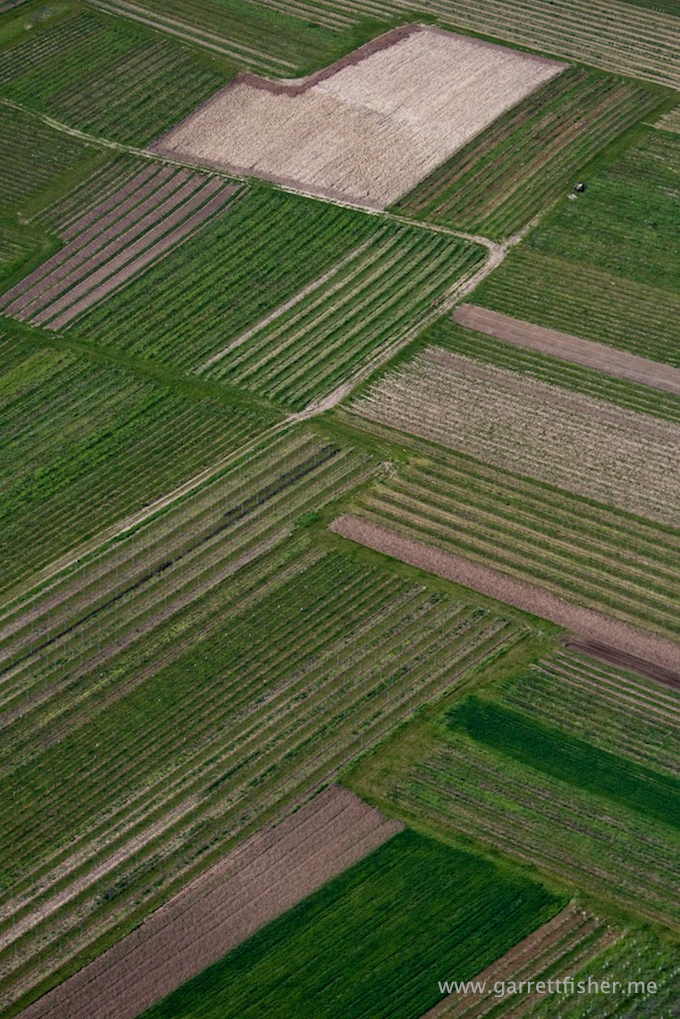 I cannot understand the German fetish with seemingly pointless construction of towers. 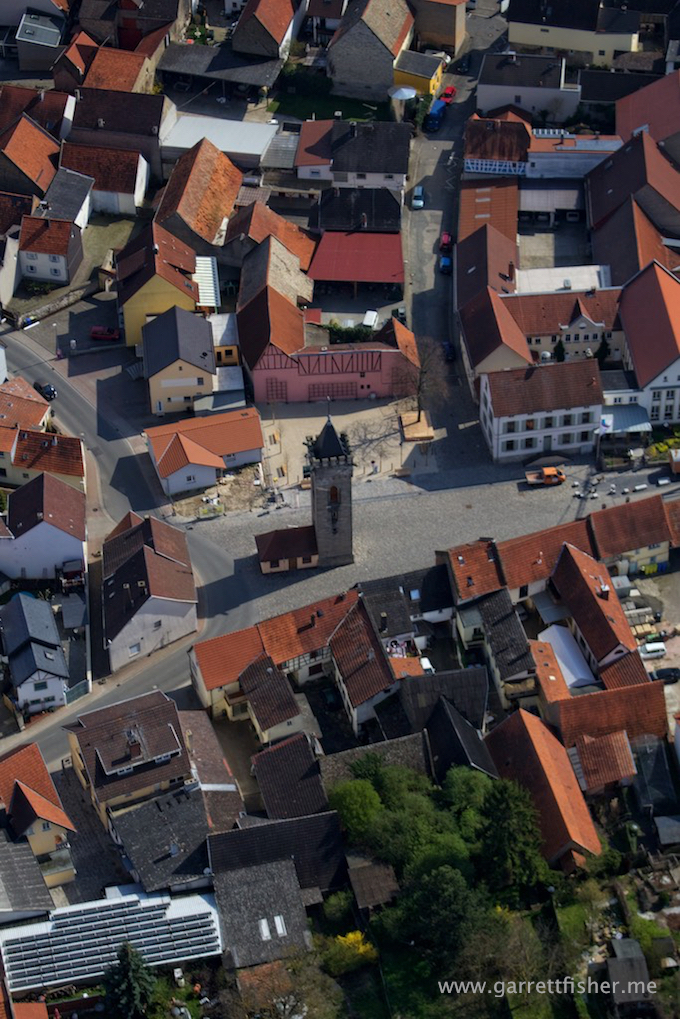 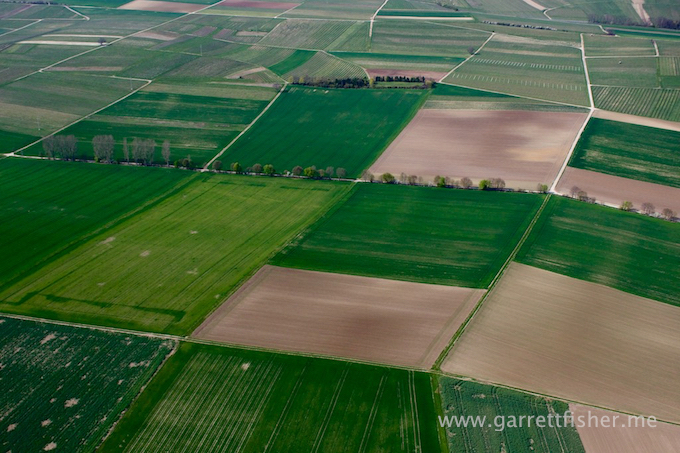 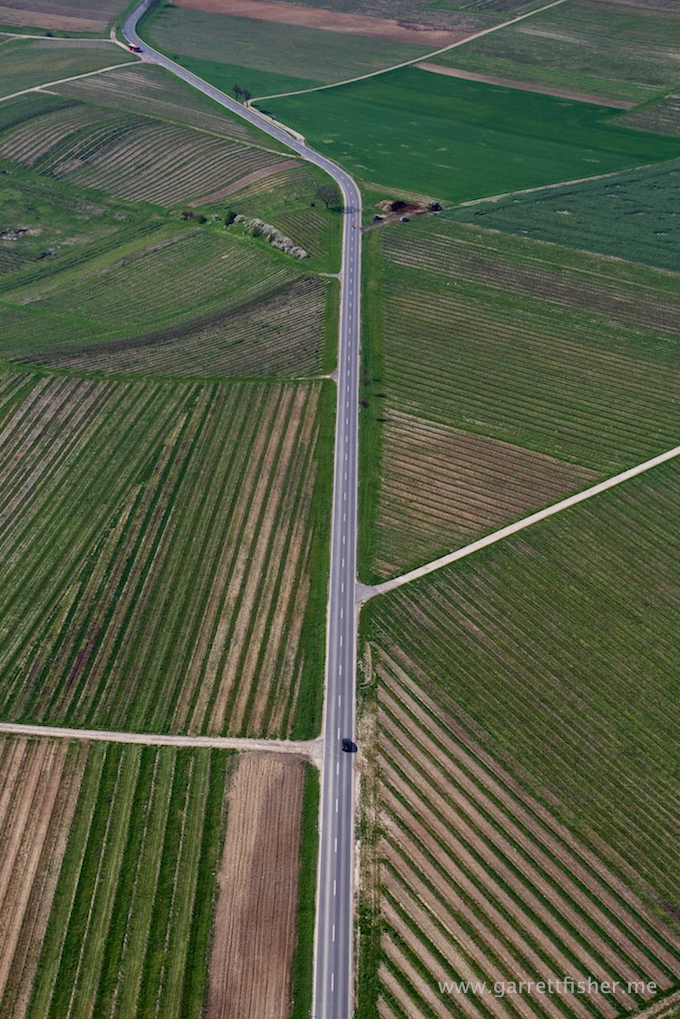 Haze in the background. Not the end of the world, though not the kind of clarity I am looking for. It doesn’t come from pollen or humidity on this particular day, though Germans don’t like it if, after identifying it is sourced from diesel particulate pollution, that you call it “smog.” 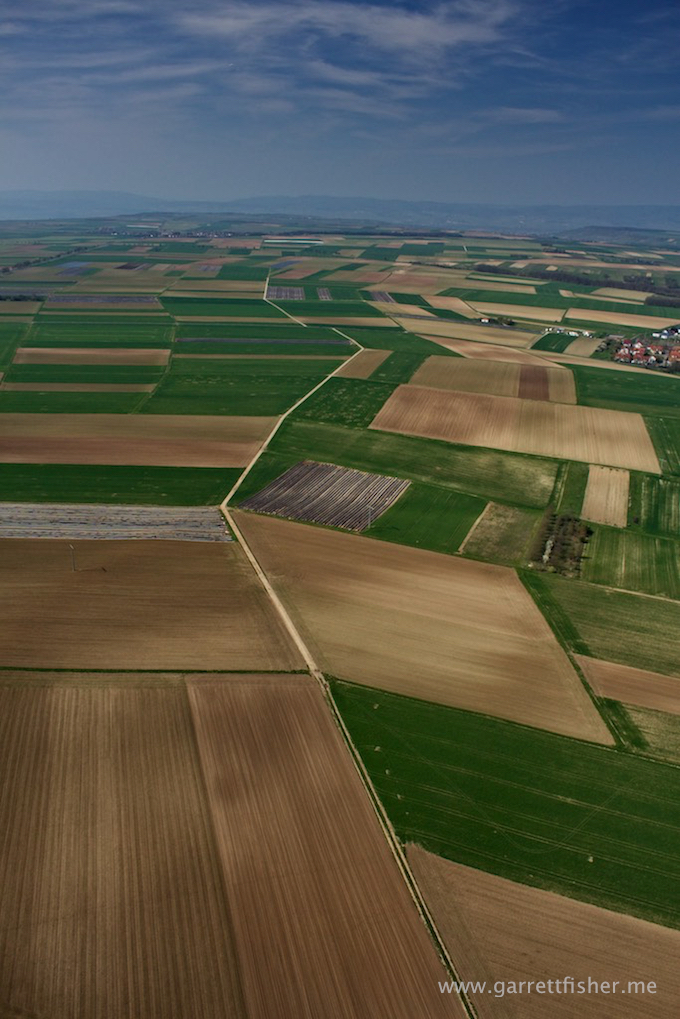 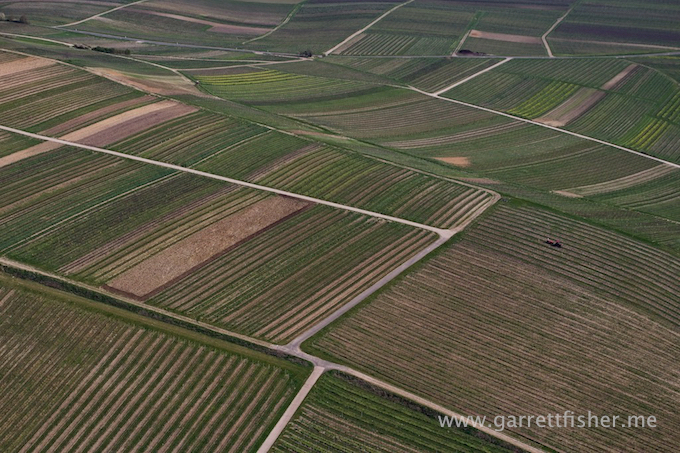 I would love it if the Germans built a church in the vineyard to make it more efficient for workers to go to church and harvest grapes, though, with thousands of years of history in Germany, the rationale behind this scene could be absolutely anything. 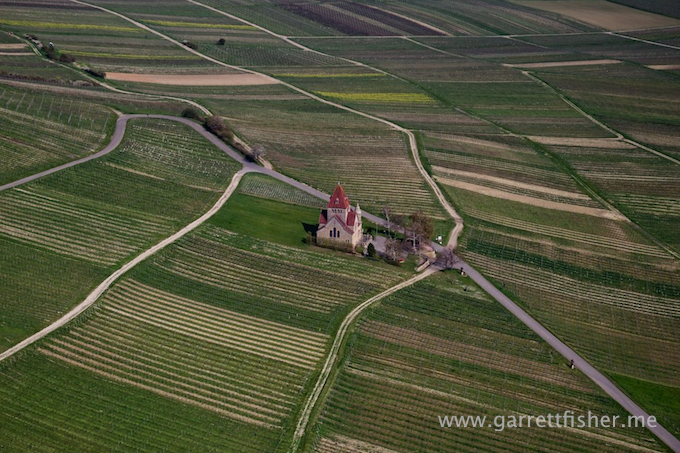 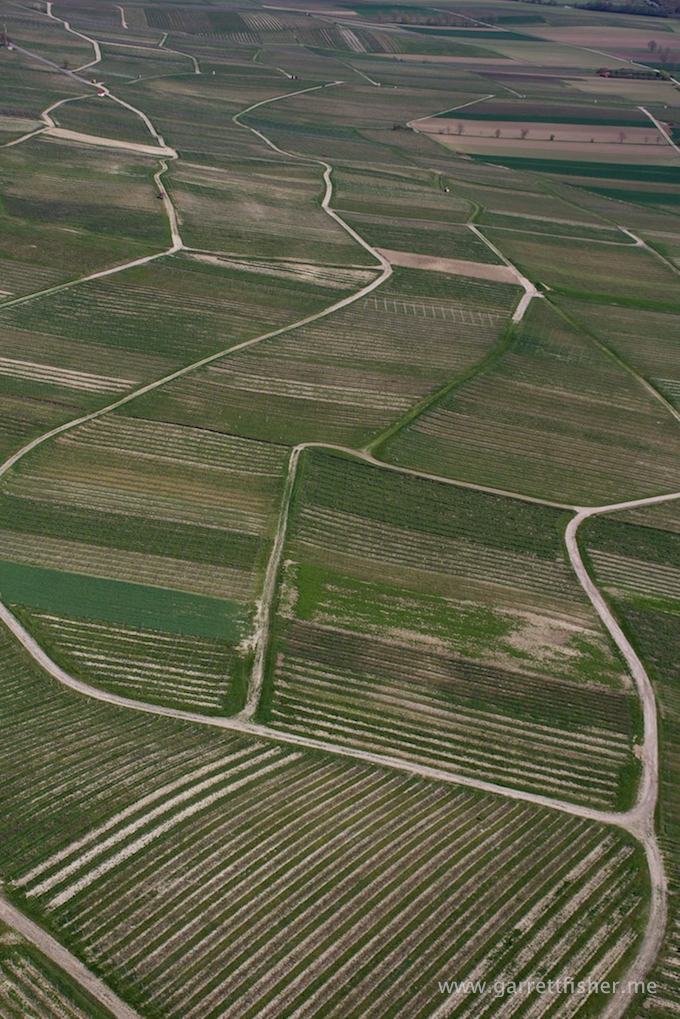 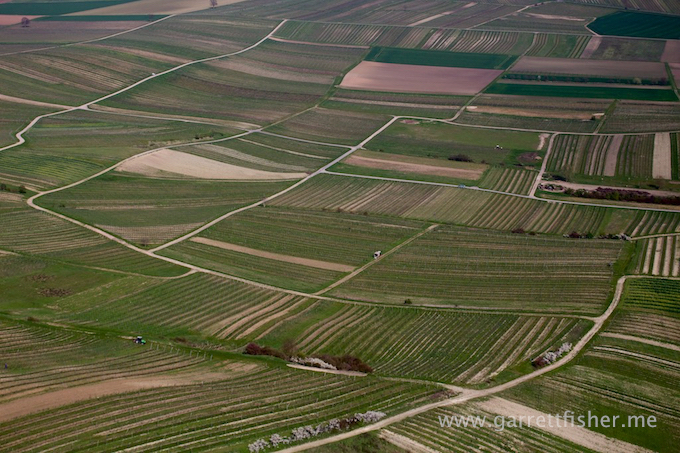 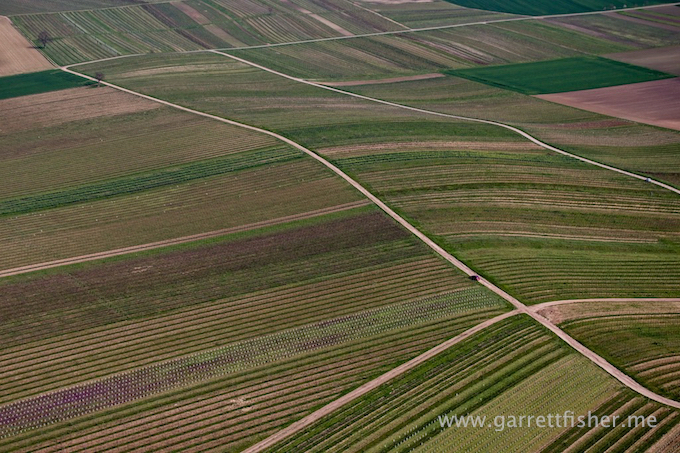 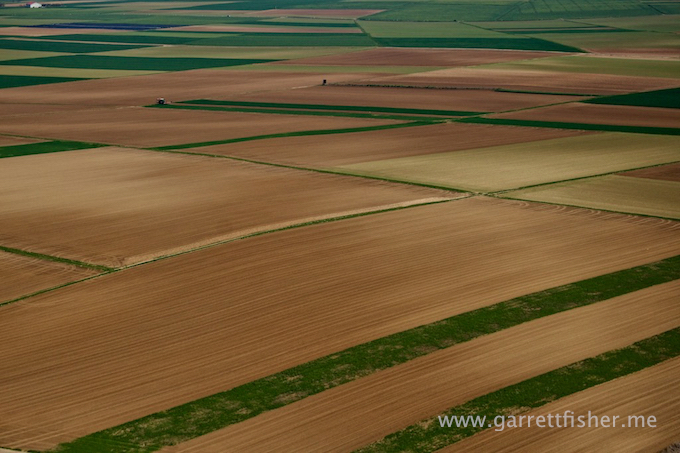 Road (though if you can read English and need that explanation, there is something wrong with you.) I wonder if there is a law that requires the road to look that way, or if all farmers alongside it naturally fall into line and plant a row of trees at exactly the same time. 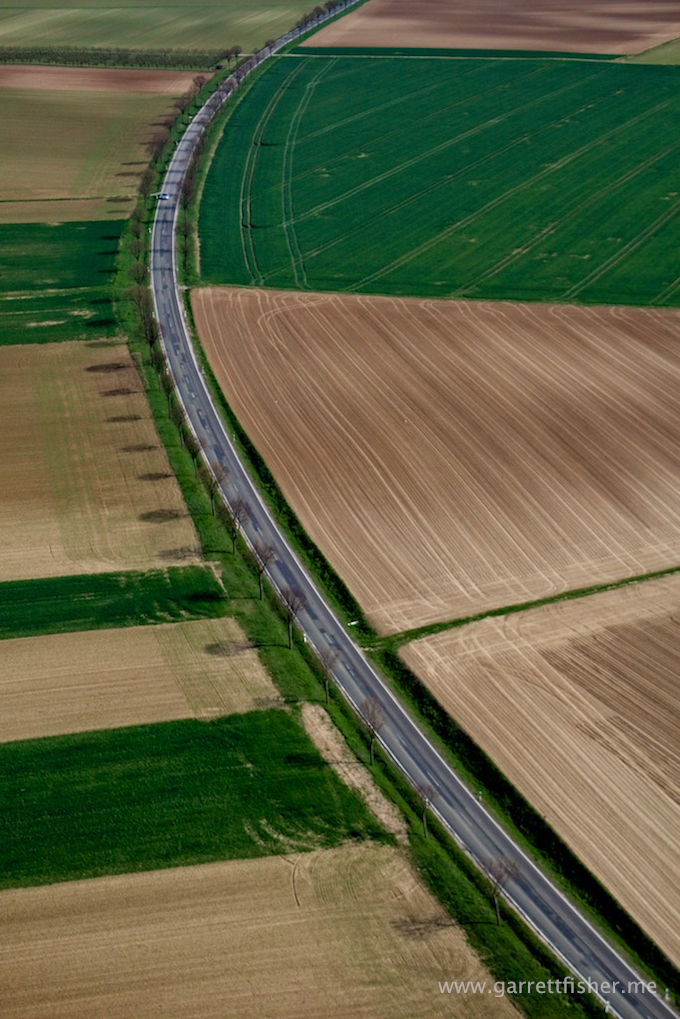 It is extremely difficult to get all 4 roads to terminate precisely at the corners of the image. It has to do with viewing angle and a precisely planned arcing turn with the airplane that I did not do. 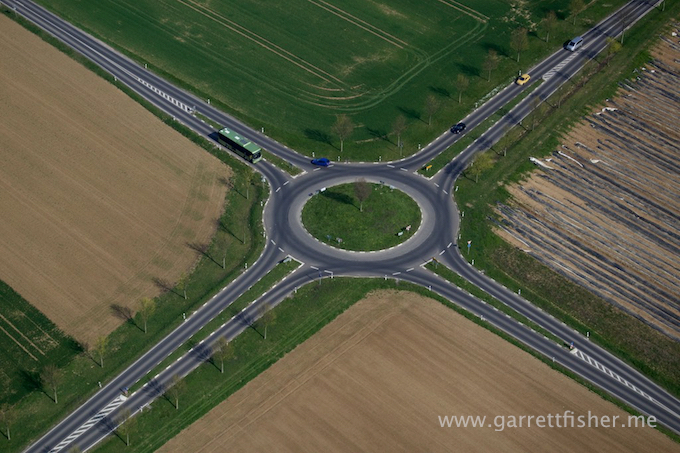 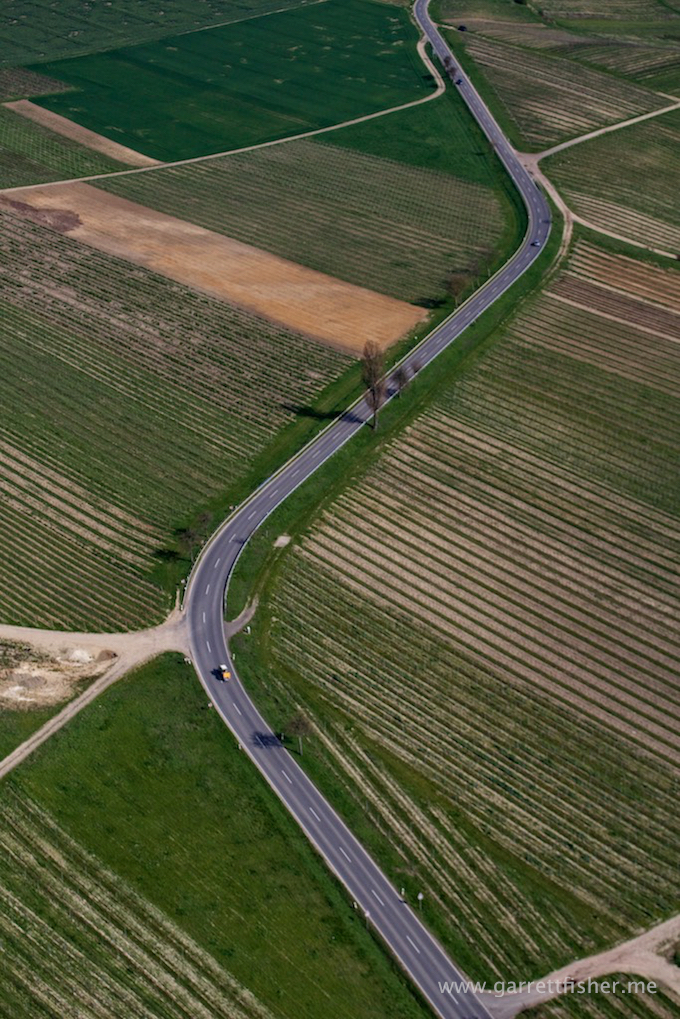 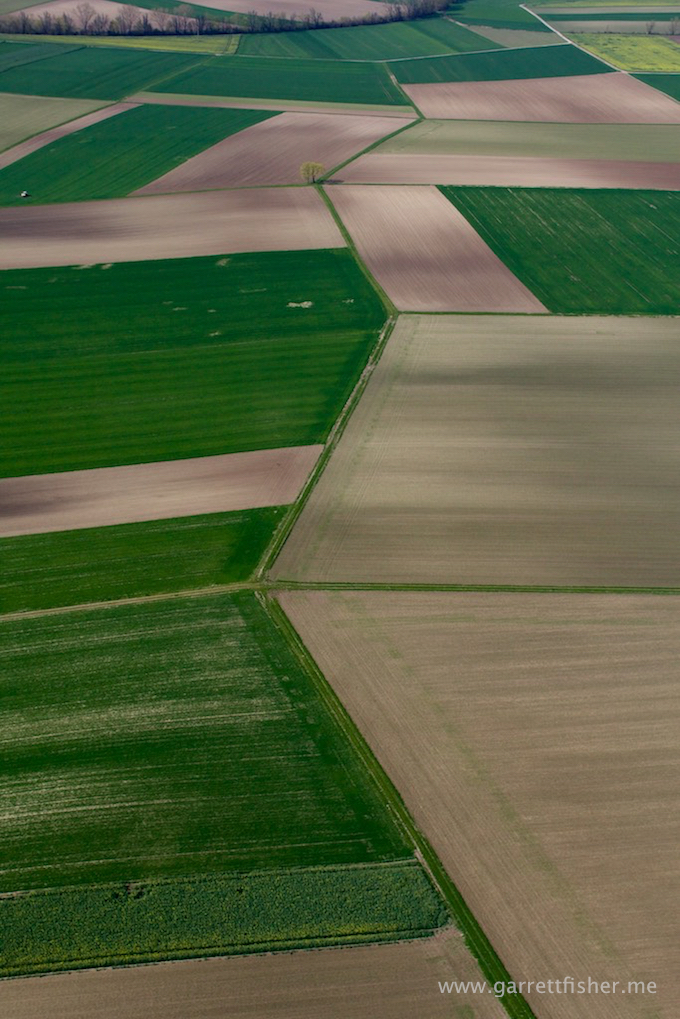 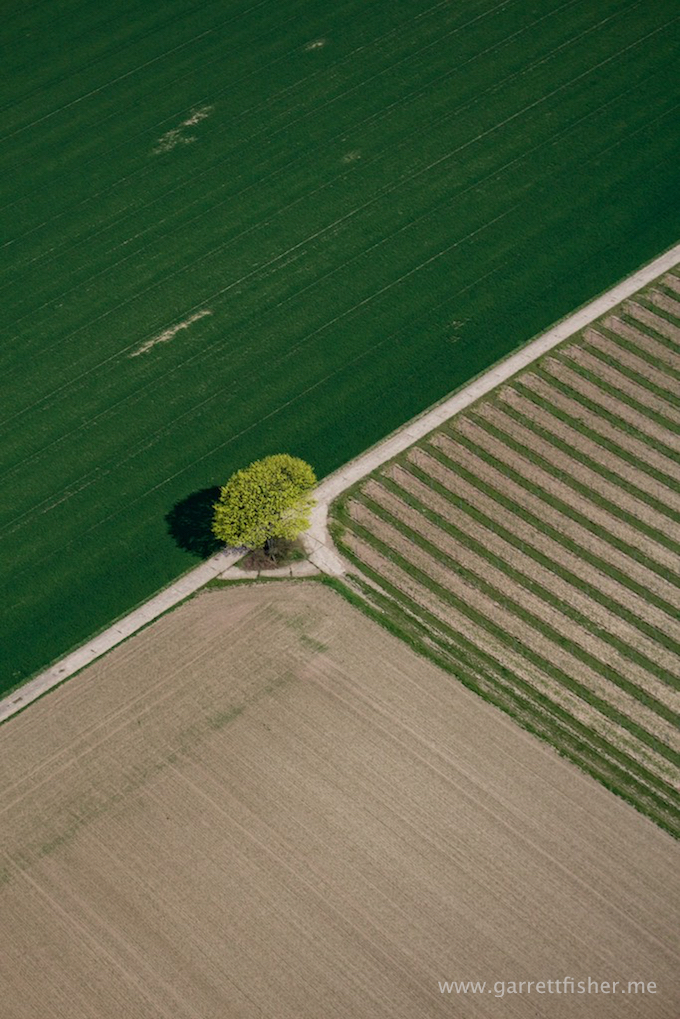 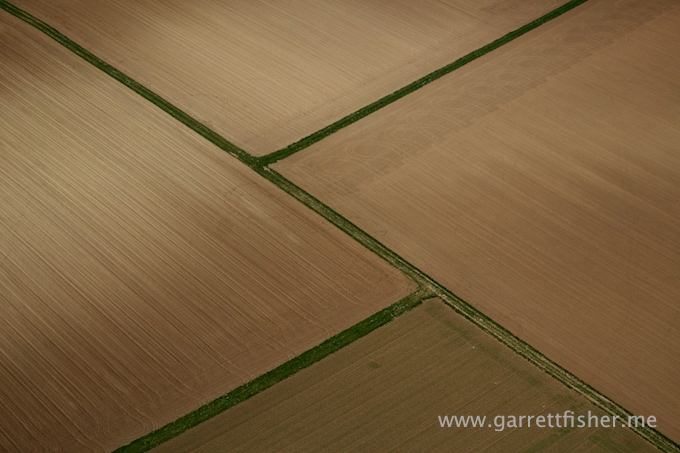 Yellow flowers are rapeseed/canola among the vineyard. 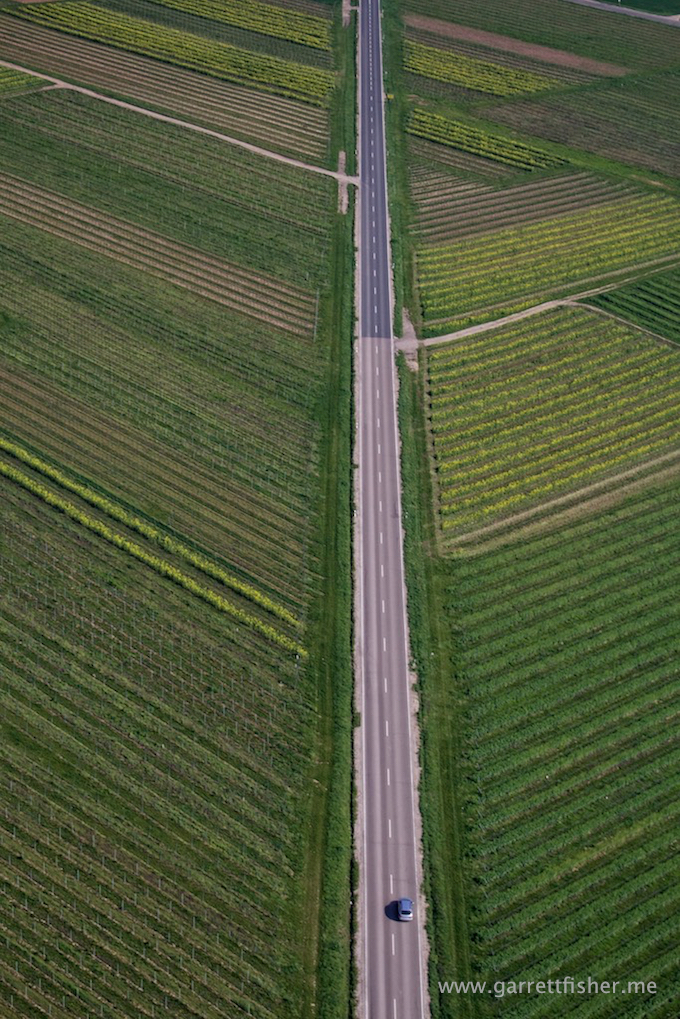