The Jura Mountains featured in my early fantasies not too long after coming to Europe. When viewing the Alps on Google Earth, one notes a secondary mountain range to the north, which straddles France and Switzerland. It looks like something out of Appalachia, with long ridges similar to what one would find in Pennsylvania. Oddly, I grew up not far from Pennsylvania, thought the place was a dump, and never went there. Then I did finally fly there, over one of those Allegheny ridges that seemed so curious, and the airplane blew most of the oil out of the engine, so I limped into Maryland and that was that.

Well, its Europe. So, the same thing that exists in redneck Appalachia is now suddenly laced with mystique, culture, and intrigue. At any rate, my first chance to go near the Jura Mountains failed spectacularly when I was escaping Germany in 2016. A low-pressure system was stacked up against the range, so I had to weasel my way toward the Rhône River while gazing in wonder at a pile of clouds that came all the way to the ground, wondering about this Appalachian promised land that I wasn’t able to see. For some reason I blocked the Alps out of my mind. I might admit that I am capable of fear.

Did I fly to it? Of course not! What reasoning person, when presented with a choice to spend the same time, money, and fuel, would choose the Jura Mountains over the Jungfrau, Mont Blanc, or the Matterhorn? It would be idiocy to think that such a trip would make sense, my sessions of cartographical musings aside.

It is not to say that one can ever get enough of Mont Blanc. It is to say that I drove to Spain and stared at the Jura Mountains from the car, for the umpteenth time, and said to myself: “Enough! You must fly to that damn mountain range!” If anything, I get a certain perverse pride pointing out from the car that “I flew to that mountain” to which my wife says [proportionally as repeated as I say it]: “I know.” That, and there was still some snow, which would soon disappear. Time to get it over with.  It is no irony, by the way, that I can see the Jura Mountains almost every time I go flying in the Alps. They sit on the horizon, which, unsurprisingly, means that the Alps sit on the horizon from the perspective of the Jura. How novel.

So, I did it. It was a mildly flat light midday April day. Haze was a tad more than I like but not bad. It was explicitly not an artistic flight, which I seem to be doing nothing but these days; it was a flight to actually, you know, go somewhere…. the main reason people seem to have airplanes.

It turned out to be quite a pleasure. It reminded me of the first reasons I started authoring photography books back in 2013 in Colorado: it is the joy of seeing a new place and sharing it, of crossing over the horizon, of exploring what I have never seen before. Not everything is National Geographic, nor is a glacier exploding in overwhelming beauty. Not every photograph needs to be illustrious artwork either. Sometimes it is just interesting, and that is delightful enough.

Of course, I have set myself to visit the Jura next winter, when the Swiss Plateau usually is fogged over. That should make quite some artistic images of the two ranges with fog in between. 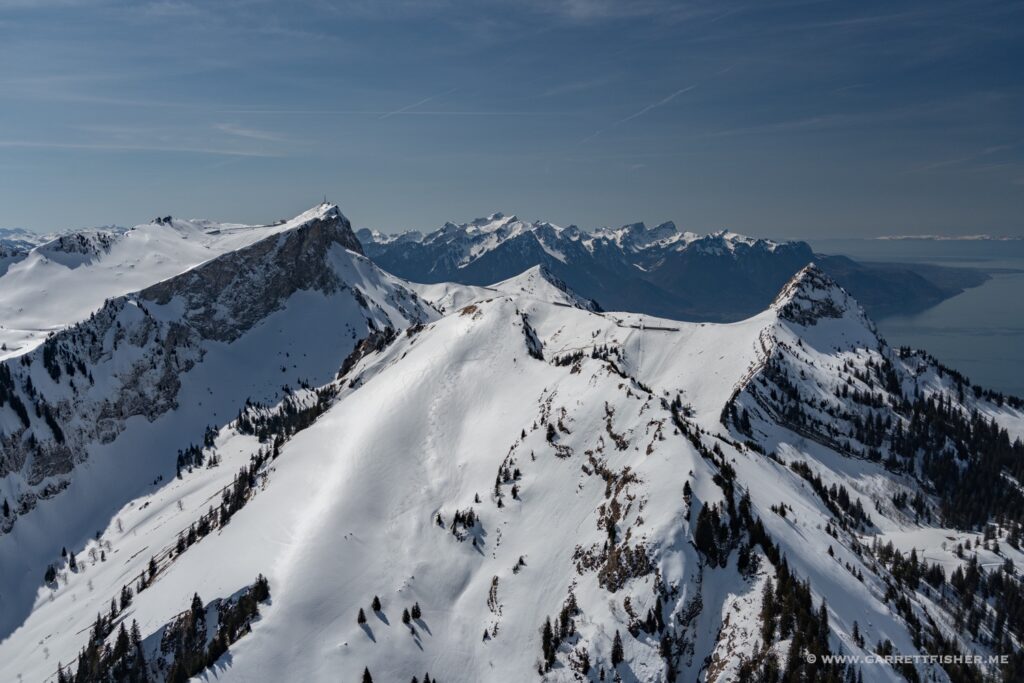 Lake Geneva with Vevey below. There is a sculpture of a large fork on the waterfront. 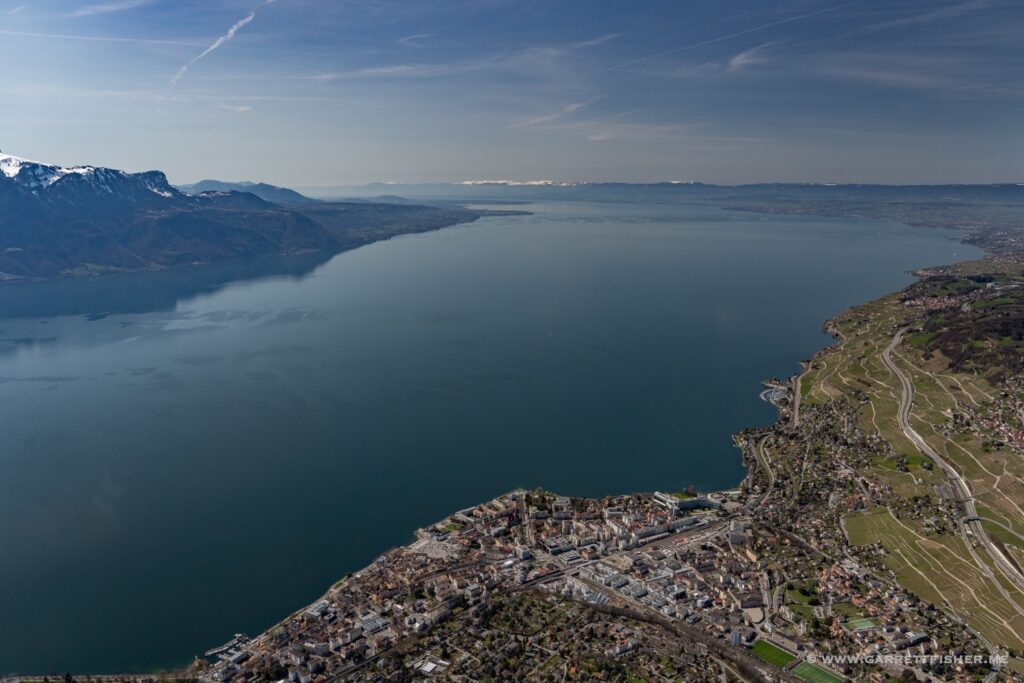 Lake Geneva with the Jura Mountains on the horizon. One can understand why they are an itch that must be scratched. 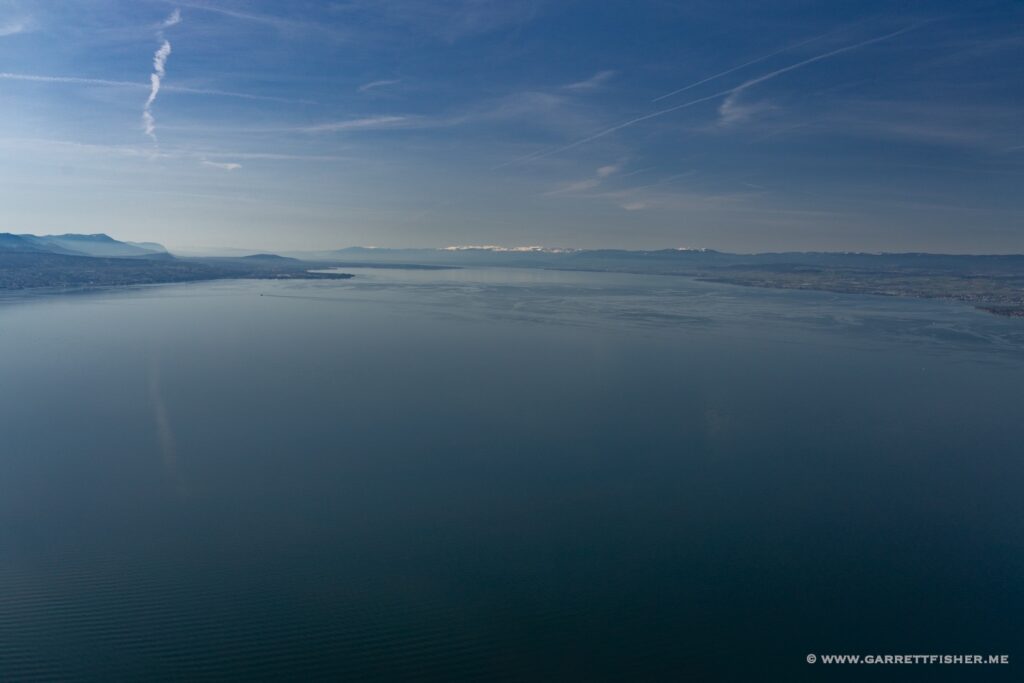 Lake Geneva, looking south, with Mont Blanc on the horizon. Why go here, when one can fly there (and freeze important body parts at 15,000′)? 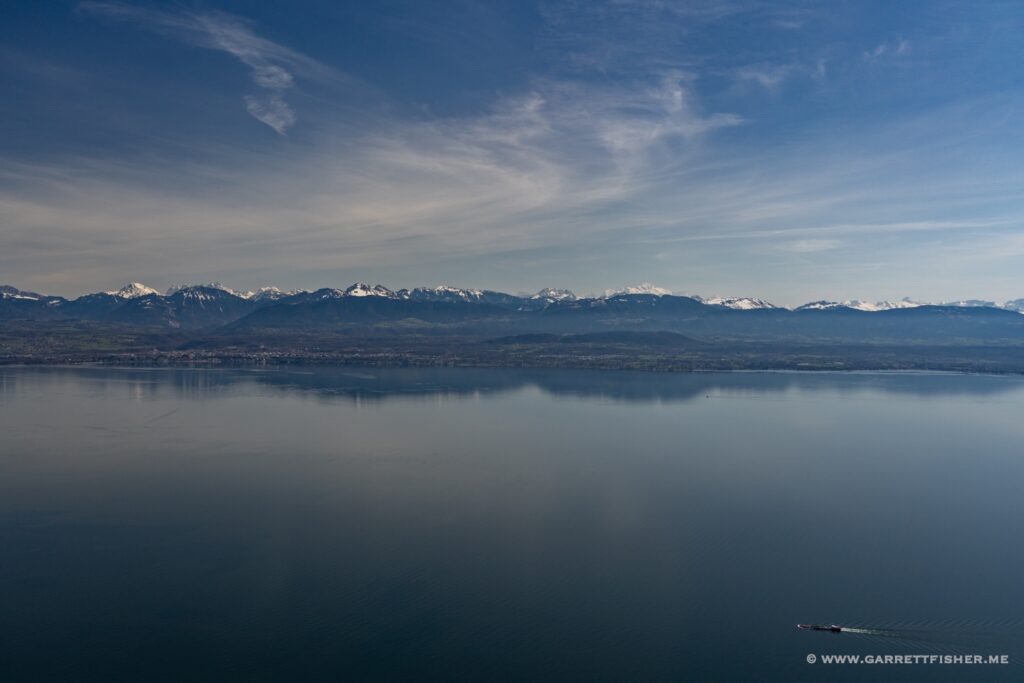 The Jura Mountains with the west end of Lake Geneva. 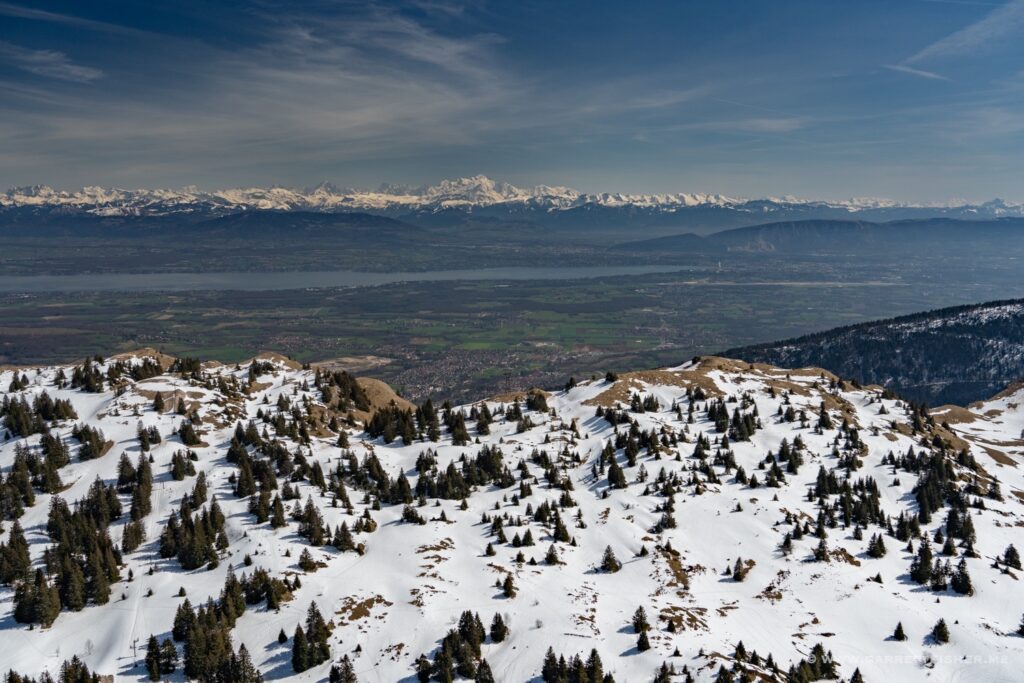 Jura Mountains looking southwest in France. This scene is more like something I would expect to see in the foothills of the Pyrenees. 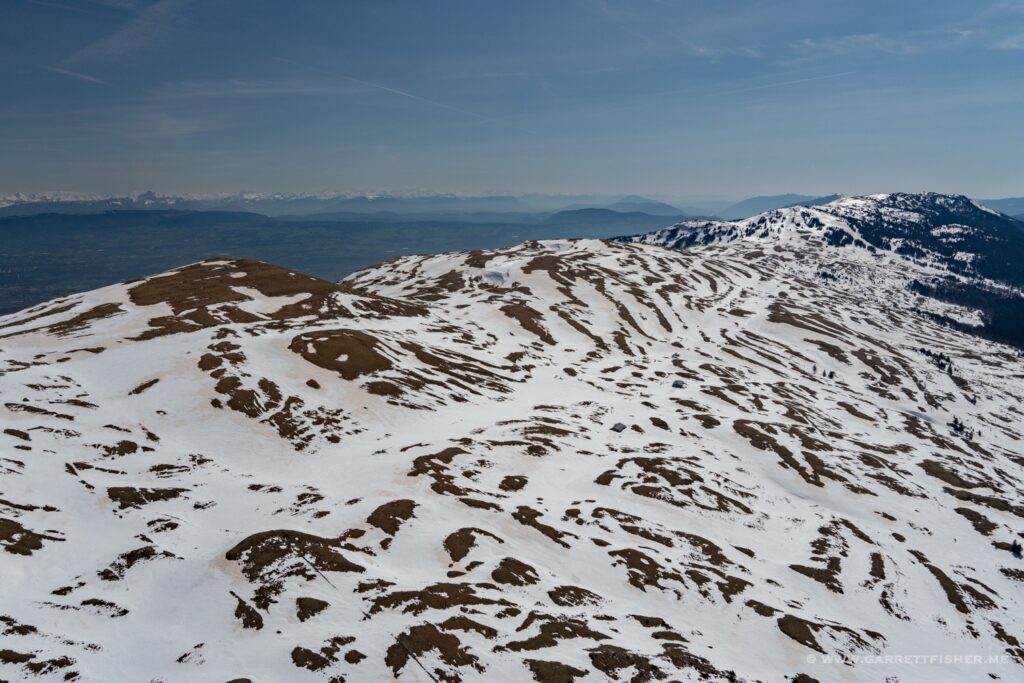 Jura Mountains, Mont Blanc on the horizon, Geneva in the middle, with a dense forest of scrubby pines. Pinus mugo uncinata, how I miss you. They are the dominant tree in the Pyrenees which, at the time, I deemed as too “scrubby” and wished the trees looked like “normal” pines, of which proliferate the Alps, for which I am now bored and get excited every time I see a single pinus mugo uncinata (which is admittedly rare). 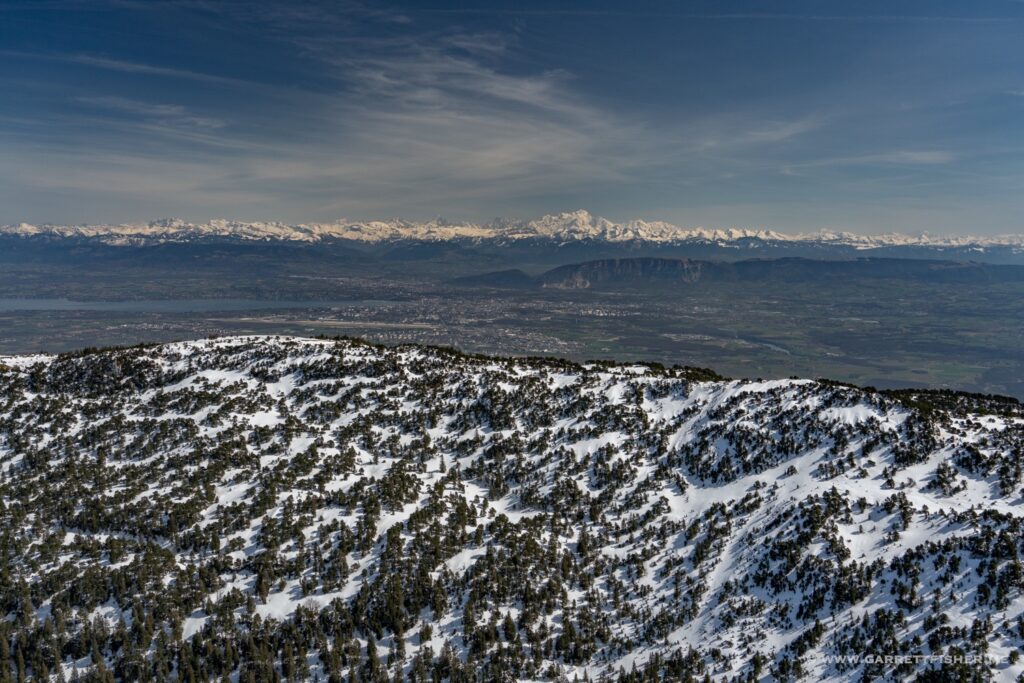 Base of the Jura Mountains with Geneva. The Large Hadron Collider lurks in here. That is one of many things that differentiates this area from Appalachia. 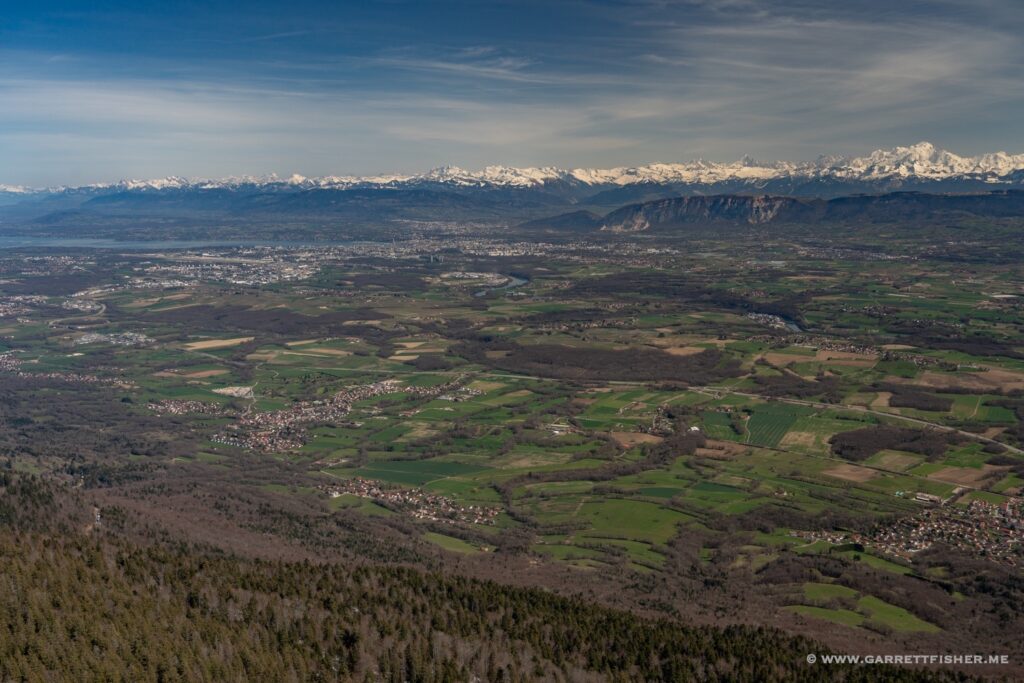 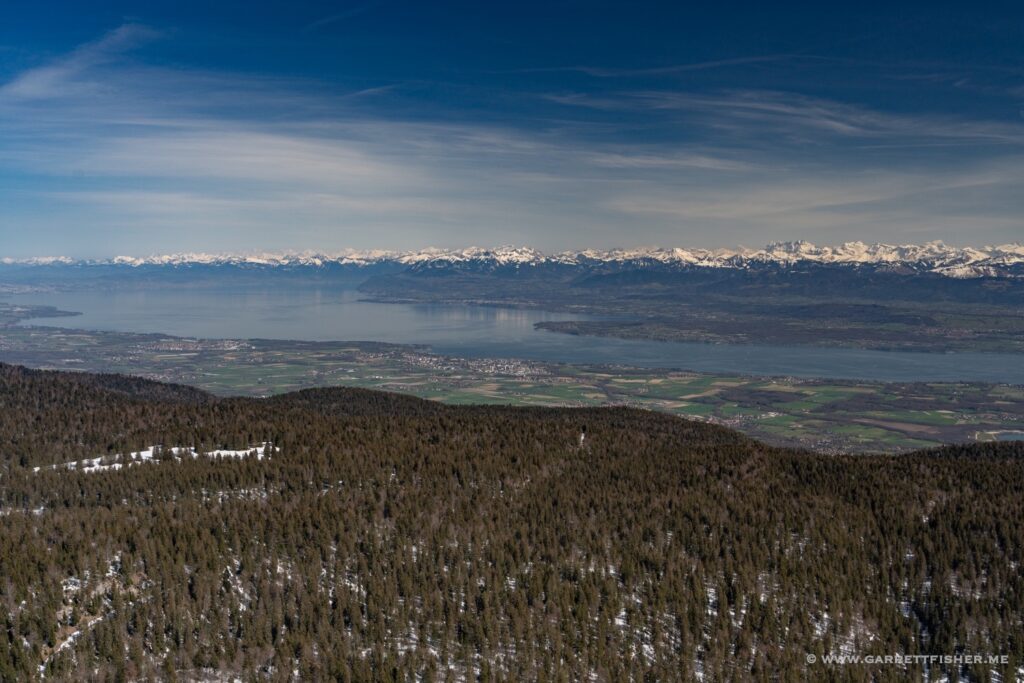 Looking the other way, into French Appalachia. One difference is that this is mostly coniferous, whereas Appalachia is mostly deciduous. This scene is more likely to be viewed in the timberlands of Montana than Pennsylvania, but I digress. It is a very wet area, which is why is does not burst into flames annually. 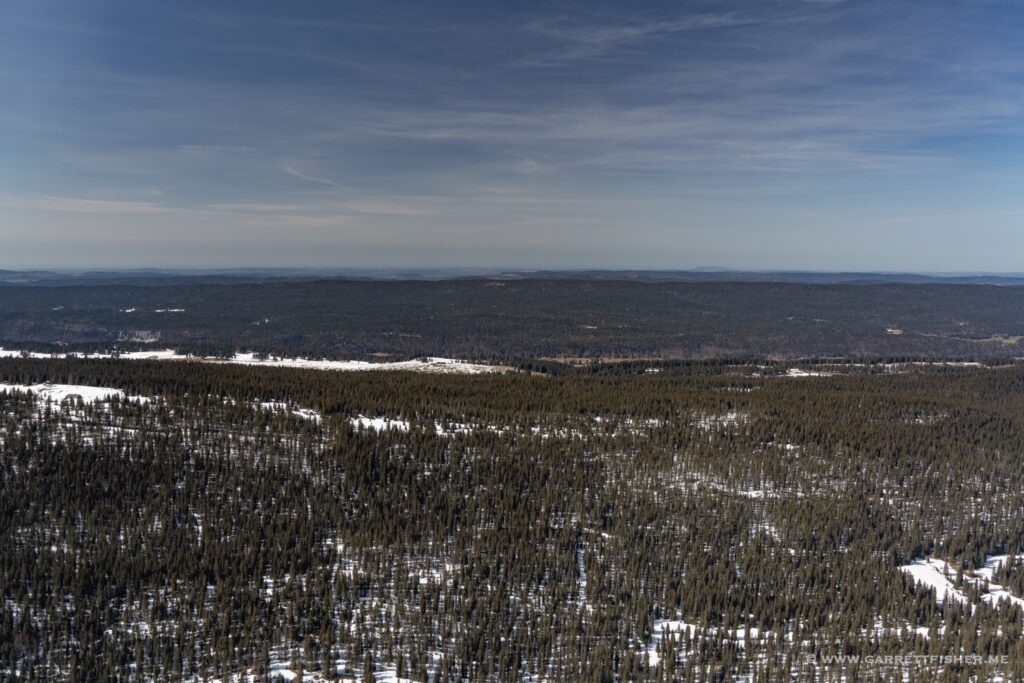 One of the few places that had a glacier in ancient times in the Jura. 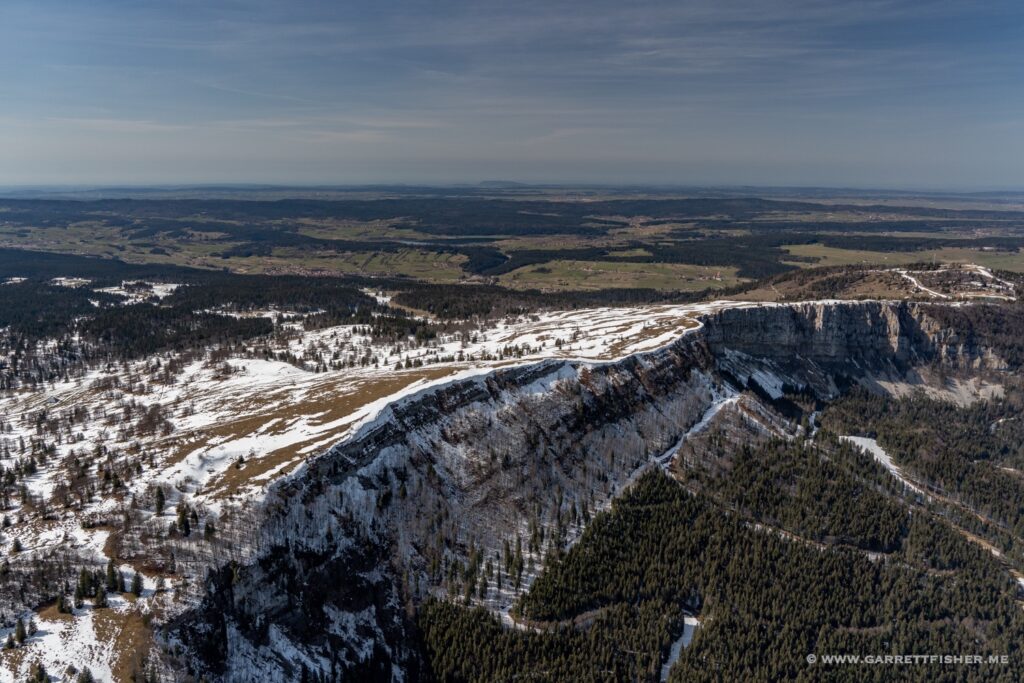 Jura, Lake Neuchâtel, and the Alps. The view is typically the other way around. 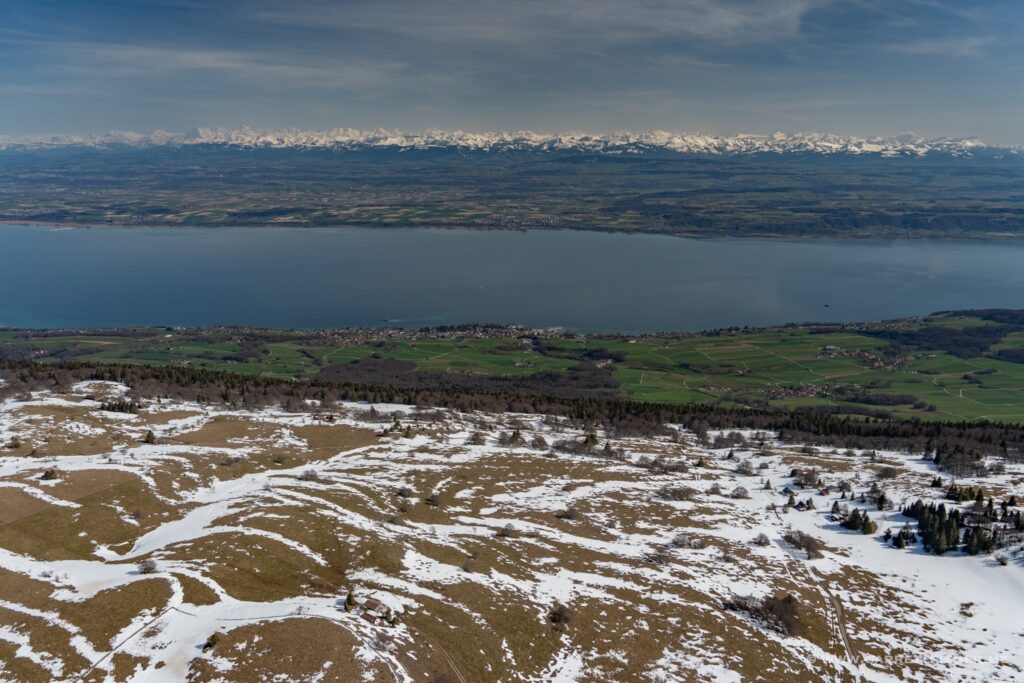 Descending over Lake Neuchâtel. This mysterious boat must be doing some sort of dredging activity. It probably involves money. It’s Switzerland. 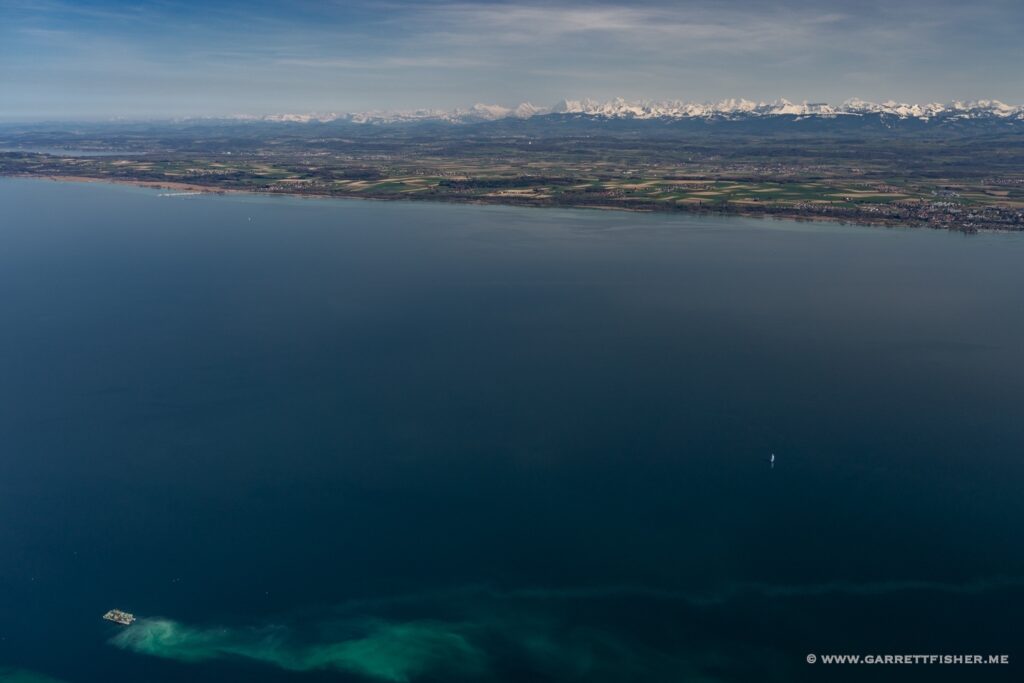 Climbout from Neuchâtel Airport. Yes, I finally bothered to land somewhere else.

Crossing Lake Neuchâtel. If the engine quit, I would have gotten wet. 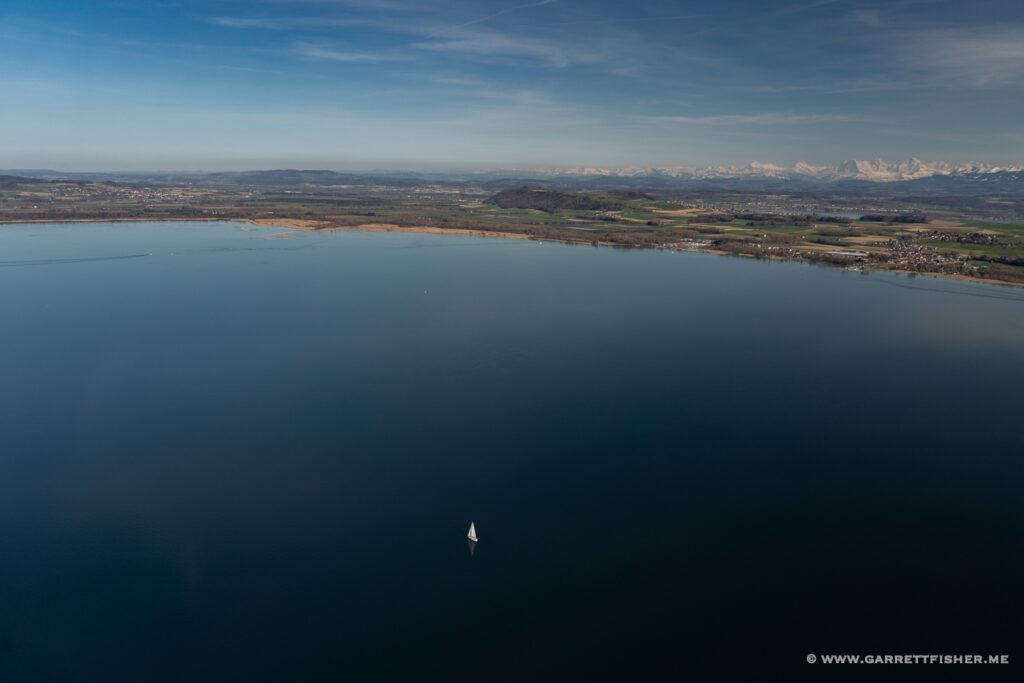 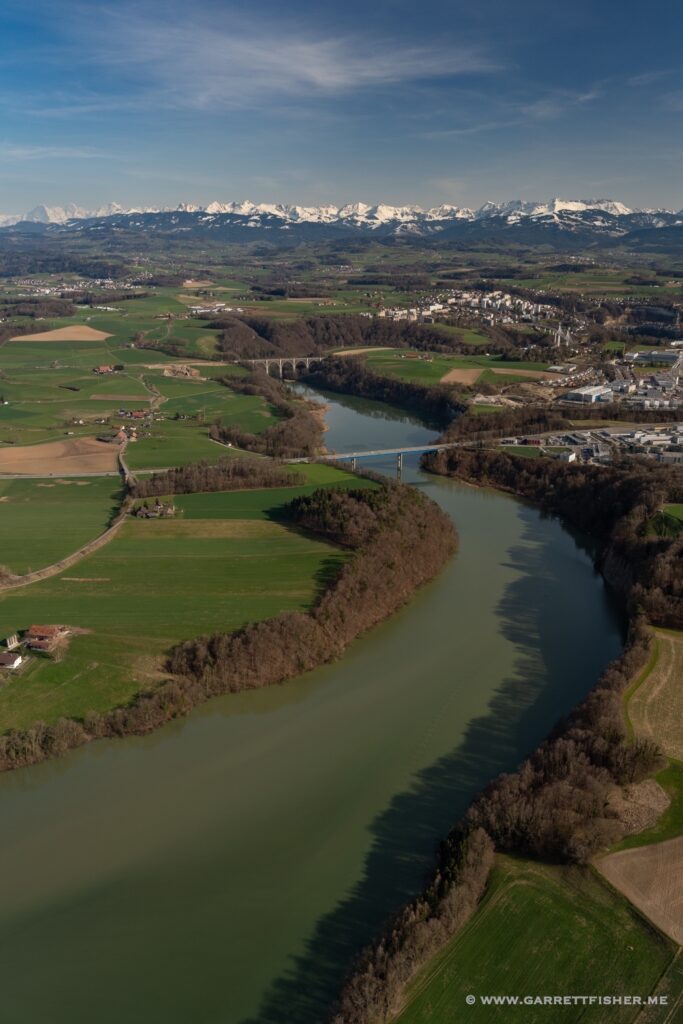 The Alps got a lot of snow this year. 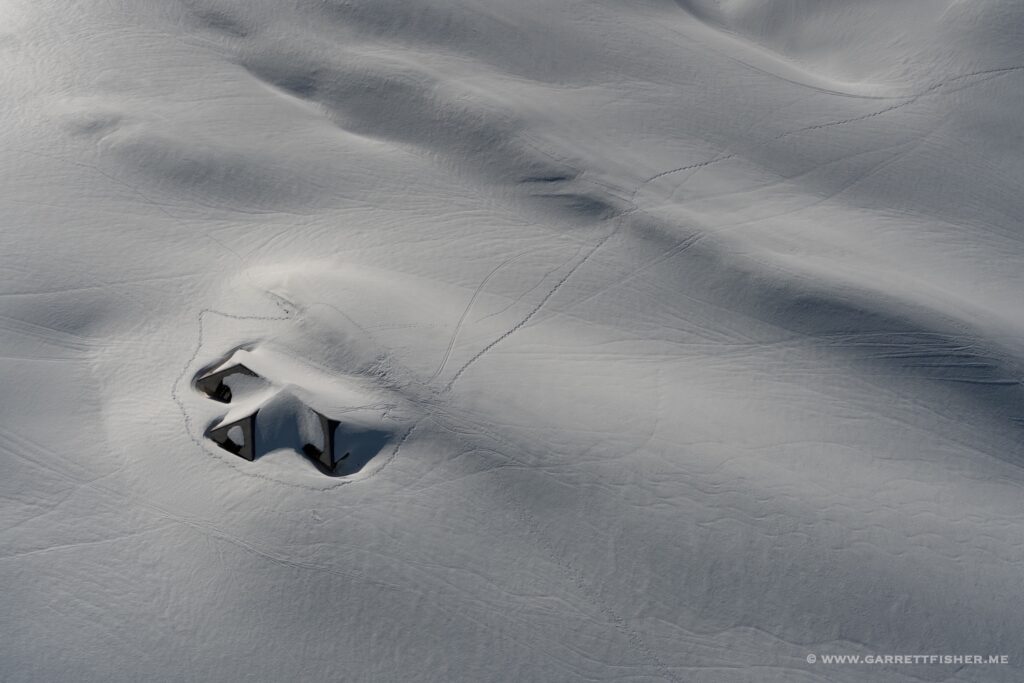 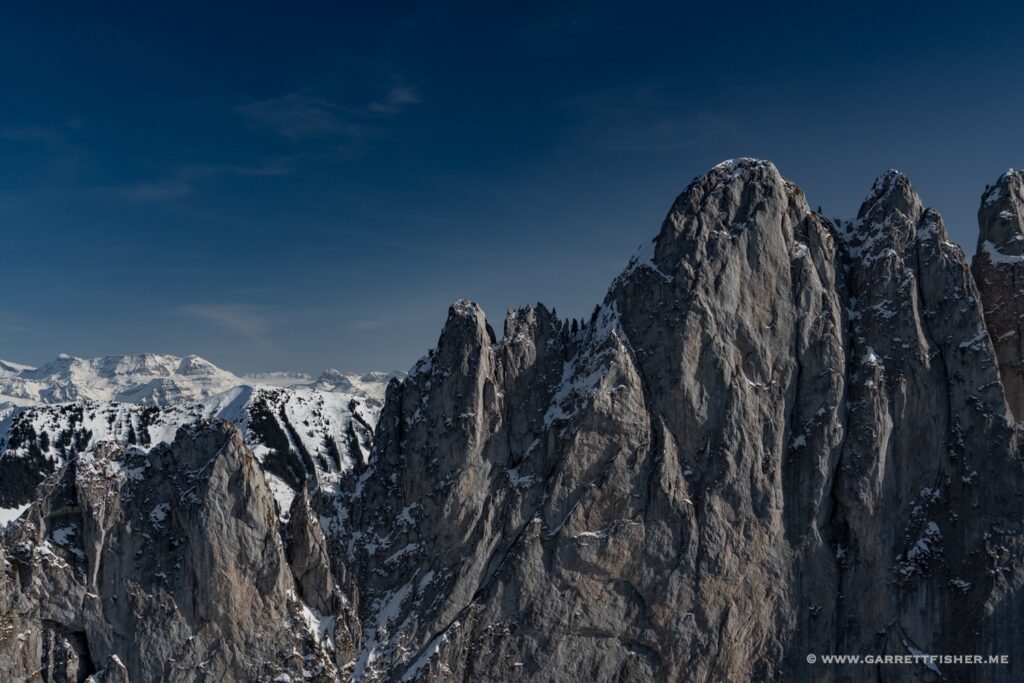 Les Rodomonts, Rougemont. Another buried chalet. Gstaad Airport is in the abyss on the other side of the chalet, about a mile below. 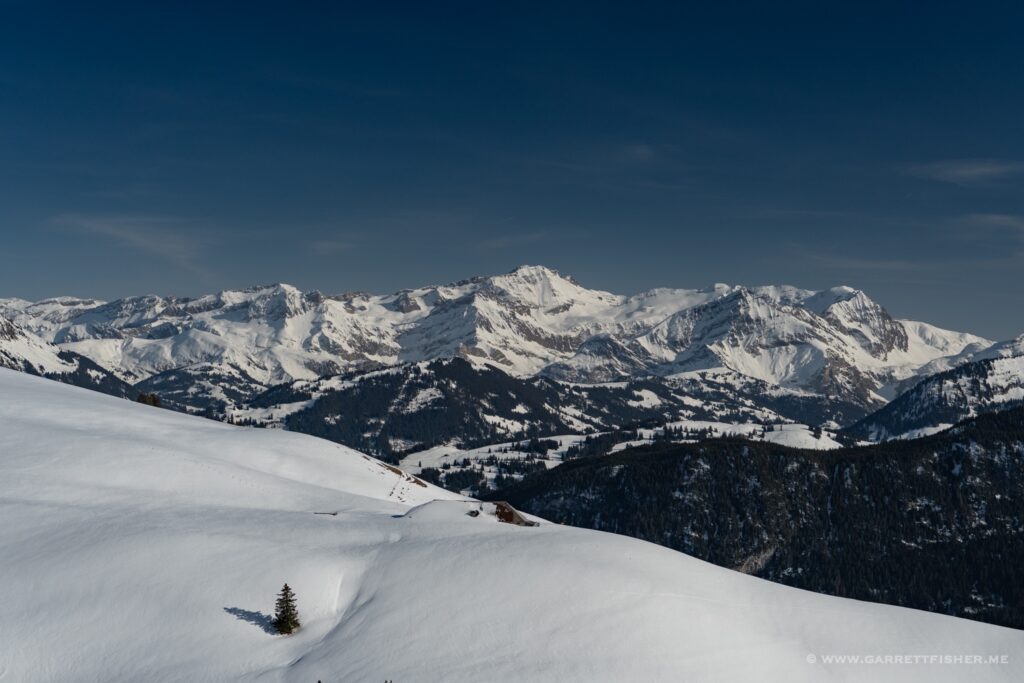