I neglected to mention in my prior post that I only got a radio for this airplane in June of 2015. Prior to that, my only radio activity was a little bit of private certificate training in the 90s, an occasional aircraft rental, and some commercial certificate training a few years ago. Since acquiring the radio, I made roughly 10 landings at a control tower and two contacts with flight service in the USA in the span of a few hundred hours of flying. Everything else was uncontrolled airports, wide open spaces, or, prior to the radio, crossing the USA multiple times without a radio at all. This French business was very close to being on an instrument flight plan, except without the added benefit of having radar services handed seamlessly from one frequency to another. Then there was the matter of French accents….yikes.

My standard modus operandi is to avoid controlled airspace. I don’t want to have to ask for clearance; I’d rather fly like a path that looks like I am drunk, weaving in and out of free airspace to go where I want. The problem was, I was now committed to heading into the South of France, and I’d have to get permission. On top of it, half of the little uncontrolled airports were restricted use, forty percent required a French fuel card that I didn’t have or 3 days notice to pay cash (that I didn’t do, refer to prior flight “plans” going to pot), and the remaining ten percent were viable. With miserable weather still over the Massif Central, 10 percent airport availability, and silly control zones, I plotted a course for clearance through only two restricted areas. Things should work out good.

That was until I got to the airport. The forecast called for La Mistral from hell out of the north, but only in the afternoon. By 10AM, it was blowing at 26 knots, so much so that it lifted the airplane onto one wheel for a moment while I was pushing over to fuel. Not good. With a lack of tie downs, I just needed get out while I could still taxi perpendicular to the wind. It called to mind advice from my German friend, whom I shall call “George W,” the nickname provided by his son, who told me about La Mistral months ago. “It is so strong, you do not overcome it!” (barked with sufficient German rage). Some of his other advice turned out to be a bit on the dramatic side, so I tossed this bit of wisdom into the gutter. It turns out, it was one of the things he was very correct about.

I took off midfield to avoid having to taxi with a 26kt wind from behind, and cleared pattern altitude by the end of the runway. Turning south, I was doing 110 knots ground speed, a tailwind of 35 knots, on an otherwise sunny and pretty French morning. Within 15 minutes, things went to pot when I called Marseille Information.

“Restricted area active.”
“Active. So I can’t fly through it?”
“Non.”
“Can I get cleared?”
“Non. Contact Orange Approach for further instructions, good day.”

Now, instead of heading southwest where I hoped winds wouldn’t be so crazy, it was straight south, to within 20 miles of the Mediterranean. Even worse, Orange Approach requested descent to 1700’ above sea level, meaning that I was flying through rotors generated over little hills. Literally, there were small dust storms, raging wind, turbulence, and rotors, as I was trying to maintain ATC assigned altitude. I almost had to advise that I could not comply with altitude assignment, then an updraft brought me up to 1700’ and beyond, having then to pull power and nose forward, remembering my commercial instructor’s words: “positive control of the airplane. In other words, do what it takes to comply with ATC.”

Orange Approach was very confused that I was heading along the western transition yet not heading southeast toward the hellishly complicated scenic tour of the Cote d’Azur; rather, I was heading southwest. Eventually, I was freed from the shackles of ATC, liberated to fly through turbulence under my own wishes.

Eventually, it became time to get cleared through another restricted area. Contacting Montpellier Information, I was told that the zone was active, and climbing to 3000 feet was recommended, which I did. Thankfully, I was able to avoid the inaneness of turbulence. Sometimes I forget that higher altitude is available, as I grow very accustomed to staying around 1,000’ AGL.

While flying through this section, I was able to witness sand blowing along the beach in Montpellier, from a distance, and blowing clear out to the Mediterranean, staying airborne for about two miles over the water. The wind was so unreal, it reminded me of flying in the western prairie of the USA, and also the area of Montana where the winds funnel off of the Absaroka Range into the wide-open prairie. Both are places where I have had to land on airport lawns or sagebrush fields, as winds changed rapidly and were in excess of 30 knots, rendering crosswind landings impossible. I was beginning to wonder if my plan of getting away from La Mistral on one tank of fuel was doable.

For that matter, should I even be in the air in this crap? Sure, it’s sunny, though what if there is engine trouble? Looking at the abundance of fields available in the south of France, I realized that an emergency landing would be like a helicopter. With 40 knot winds and a 23mph stall speed with vortex generators, I could descend like an elevator into a very tight spot. Maybe this isn’t so silly!

Montpellier Information transitioned to Montpellier Approach to clear some control zones due to altitude. I took the chance to get an observation on winds at my intended destination: Lezignan, France: 28 knots. That would explain the windmills swirling at a fury. Perpignan was no better, and I would come up short trying to clear the Pyrenees on this tank. Fiddlesticks! Checking my notes, the 28 knot “breeze” was within 20 degrees of runway heading, so touchdown would be fine, especially on an angle over the asphalt. The only problem was a 45-knot approach speed, the world’s longest long final.

Perpendicular taxing required full right rudder to go straight. Thankfully, winds were level, as opposed to turbulent, so they did not want to come under the wing and cause any trouble. After fueling, I was informed that this wind is La Tramontane, different from La Mistral, and it blows quite a bit from the west/northwest, instead of north/northeast like its sister over in the Rhone valley. This wind funnels between the Pyrenees and the Massif Central. While named differently, the theory is the same. There is a French saying “C’est le pays du vent,” (“It is the land of wind”) which I seem to have learned in a rather immersive way.

I was unsure about taxing perpendicular again, and I asked if I could take off from the fuel ramp. The controller (fees are paid in the tower) had a sort of…unsure…look on his face, so I asked “Can you literally just look the other way while I do it?” That elicited a laugh, and then he offered to come out of the tower and hold the wing so I could taxi into position, which I accepted, remembering my late first instructor’s wisdom: “If you ever land in such wind that you can’t taxi perpendicular to it, call Unicom and ask for someone to hold the wing for you while taxiing.”

Climbing the eastern side of the Pyrenees was interesting, requiring detective work to manage restrictive French airspace coupled with winds blowing in directions parallel to terrain, as opposed to perpendicular. With perpendicular wind, I can soar like a glider. With parallel, I get knocked around and can only seem to find downdrafts, which is what happened here. I am quite thankful I didn’t try making it all the way to Spain on one tank, as that would have ended poorly.

Finally reaching shy of 7,000 feet, I approached La Cerdanya (La Cerdagne on the French side) from a valley spur that I had not yet driven. What I found reminded me of Colorado: thick stands of pine, a solid timberline, and mountains that looked a lot like the Rockies. There was even a pass 30 minutes from the house in France that was a pine-covered plateau, a place to snow shoe and cross country ski. Home, what a wonderful feeling, not just the sense of a place to call home, but also to find one that, on a deep level, connects to what I like.

As I crossed the Spanish border, I aimed for a downwind leg entry to my new home airport, noticing how utterly beautiful this place is from the air. The air quality was immensely clear and the countryside a work of art. That was spiritually mesmerizing, until I rammed into heavy turbulence and rotors at pattern altitude, getting the snot beat out of me as I was about to turn base. I opted to extend until the guerre de l’aire was won, turning base in more manageable air. It was all very puzzling as the windsock was not indicating much.

After landing, I asked a local why I got knocked around, given that I had previously asked what to expect and was told that the place doesn’t have any negative effects of mountains on wind (seriously? I actually believed that? How many mountain places have I been based at to know better?). “Oh, normally its good. Well, except, on north wind days like today. Its great for gliding, you just don’t want to be doing powered flight on a day like today.” [Eye roll] The real estate agent also told us it’s not a windy place at the house, and it blows like a hurricane down from the Puigmal Range most afternoons. I was told by someone else that the “national sport of Spain is lying and corruption.” I suppose I would have rather found that out on the ground and not in the air.

While it appears pleasant, the wind is blowing with a fury. 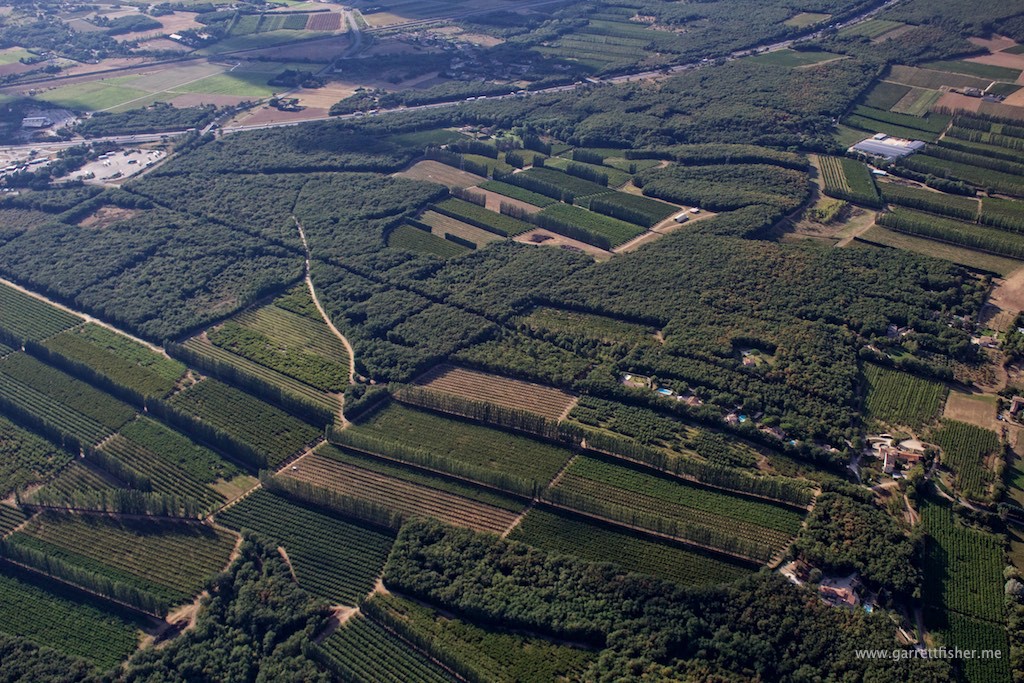 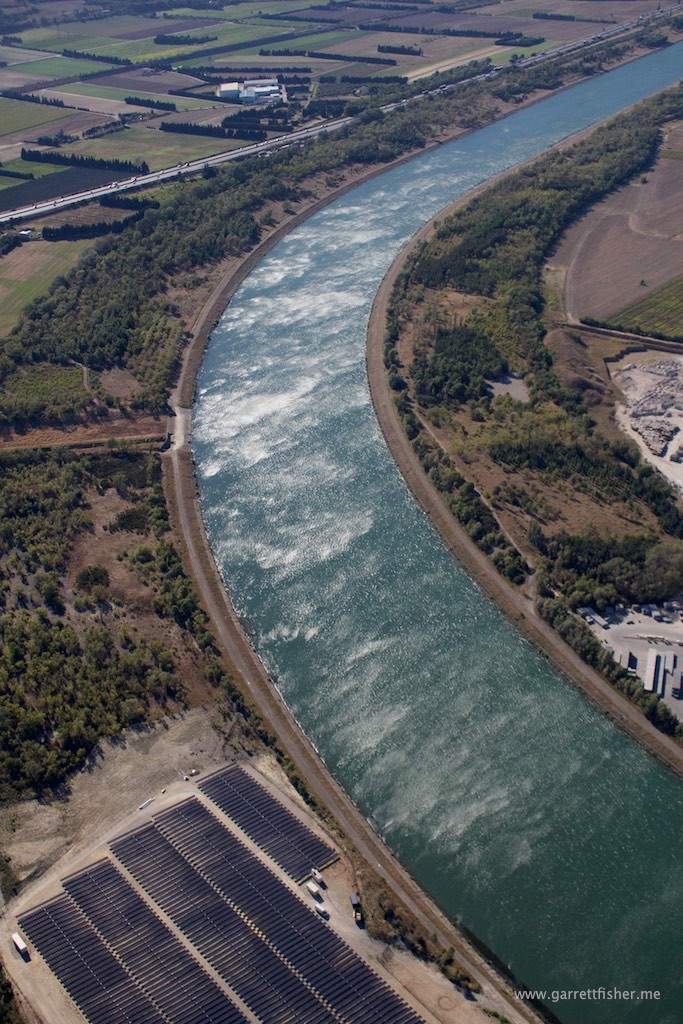 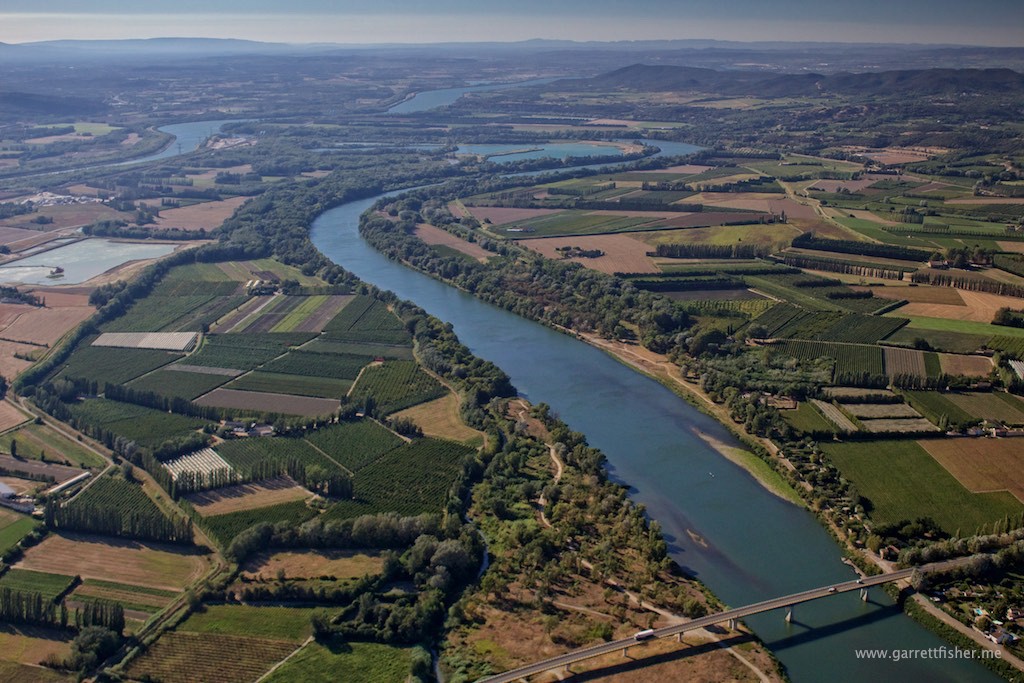 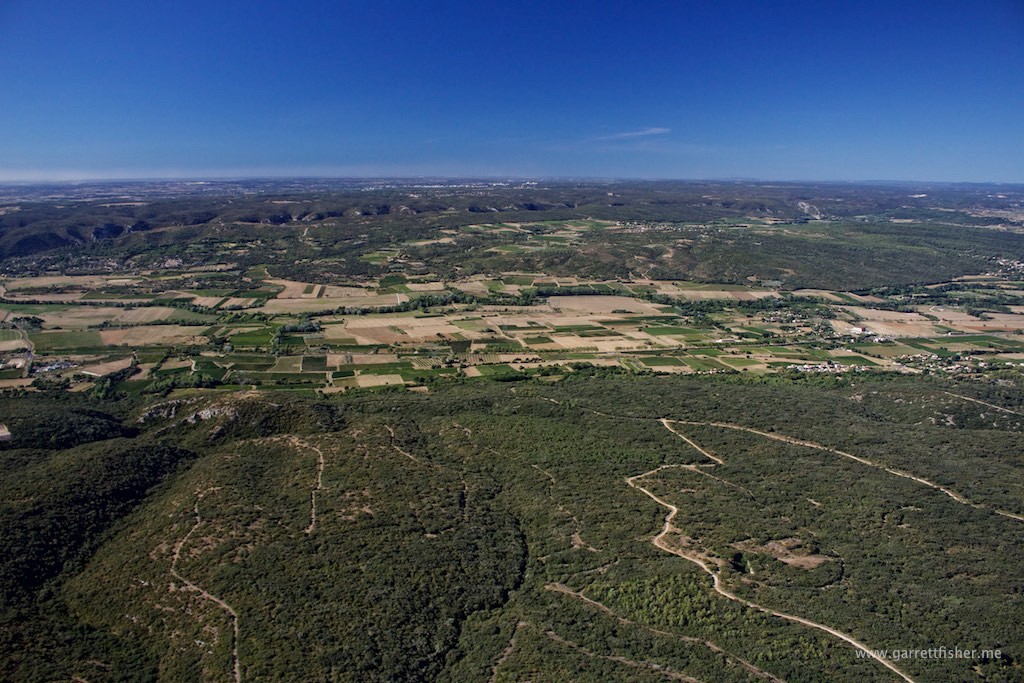 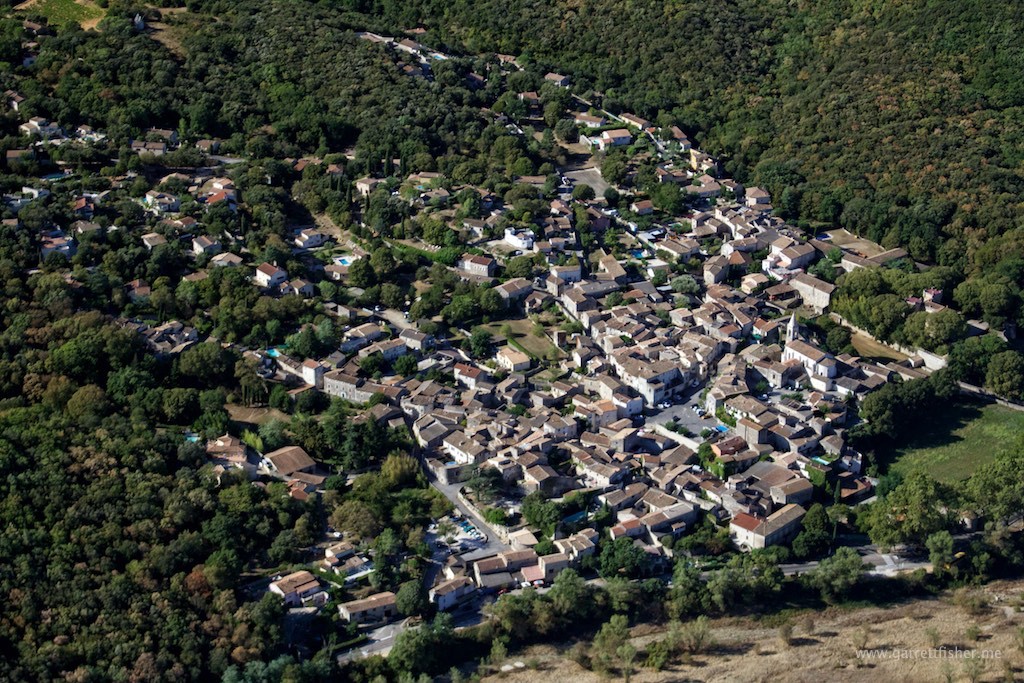 Vineyards, NW of Nimes, Mediterranean on the horizon. 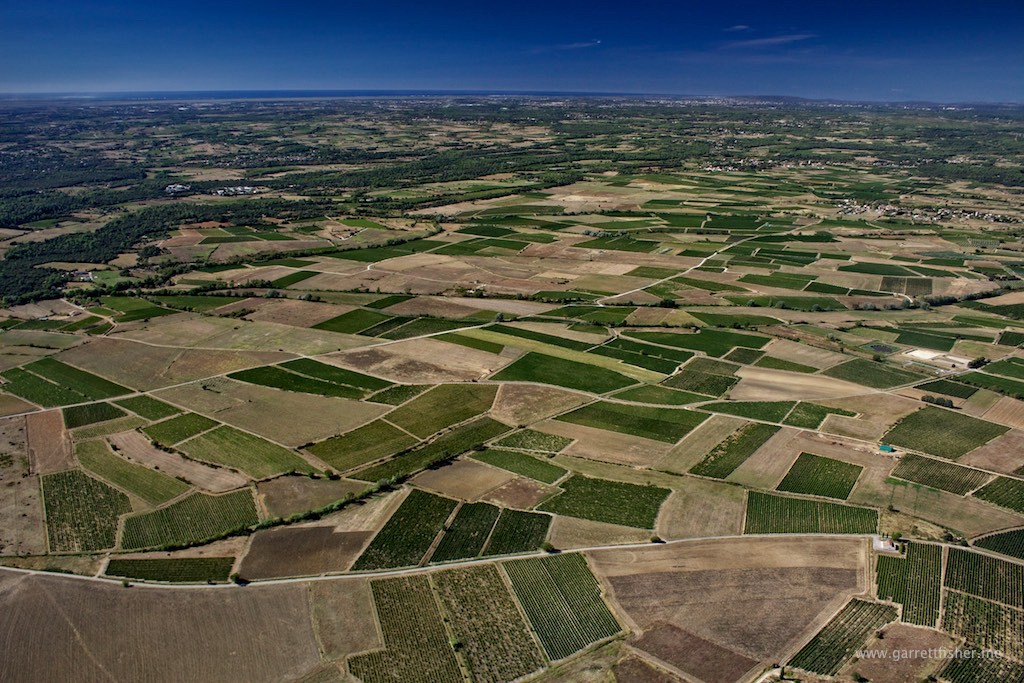 Looking back toward the Massif Central 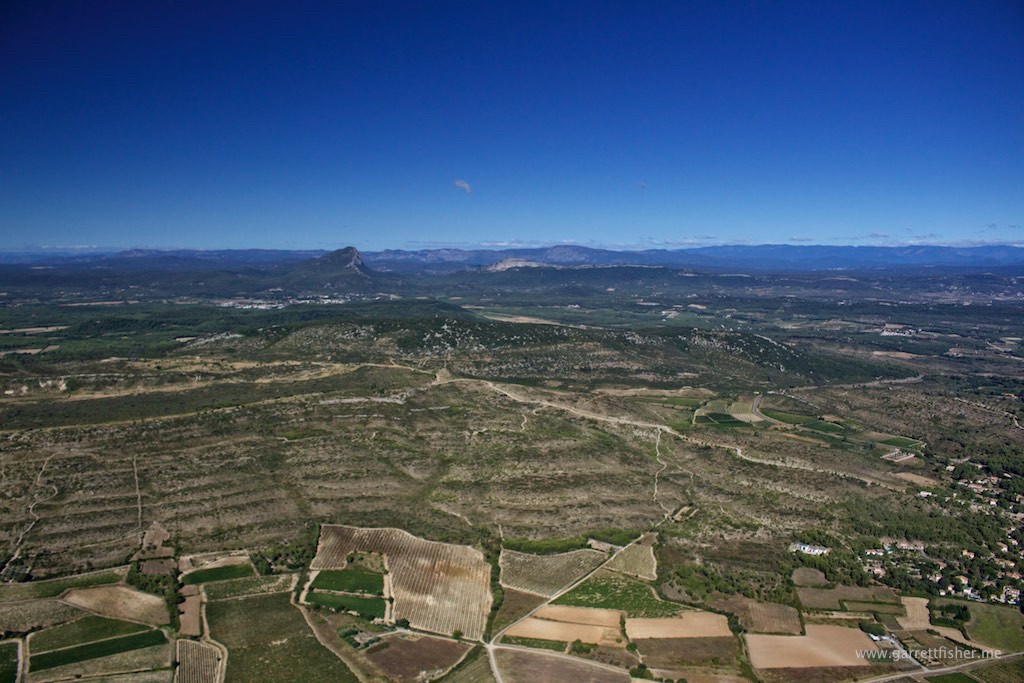 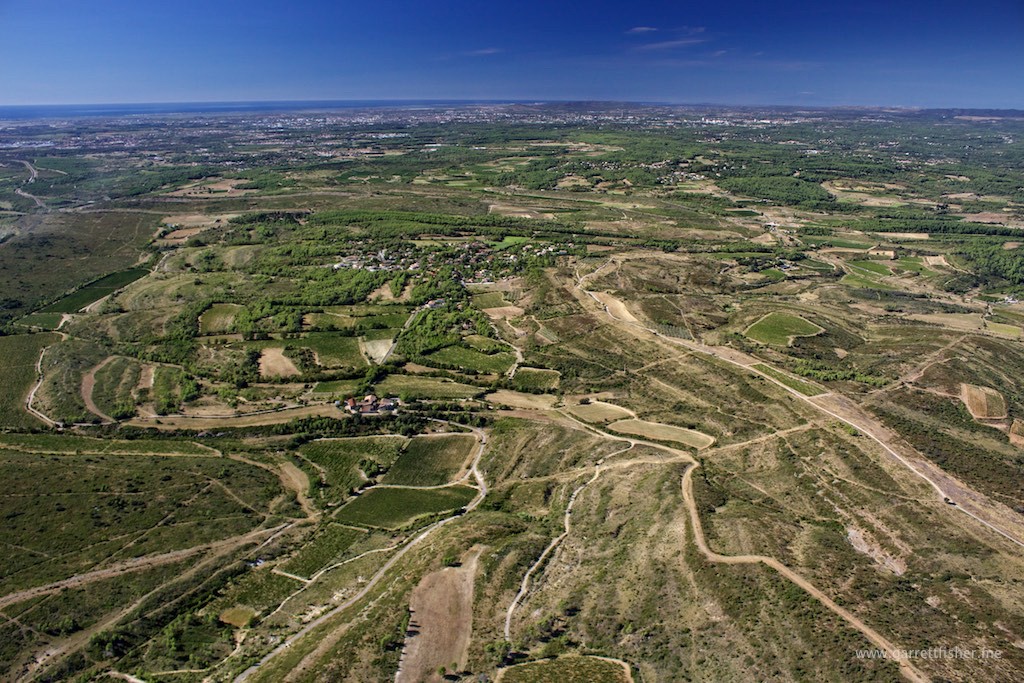 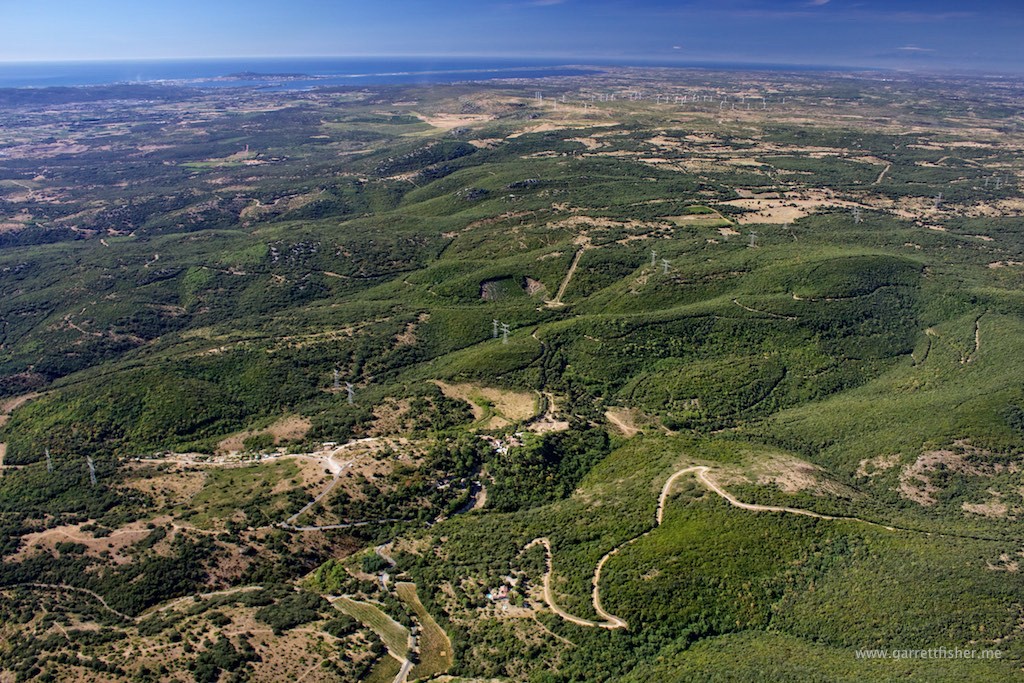 Vineyards, instead of farm fields. 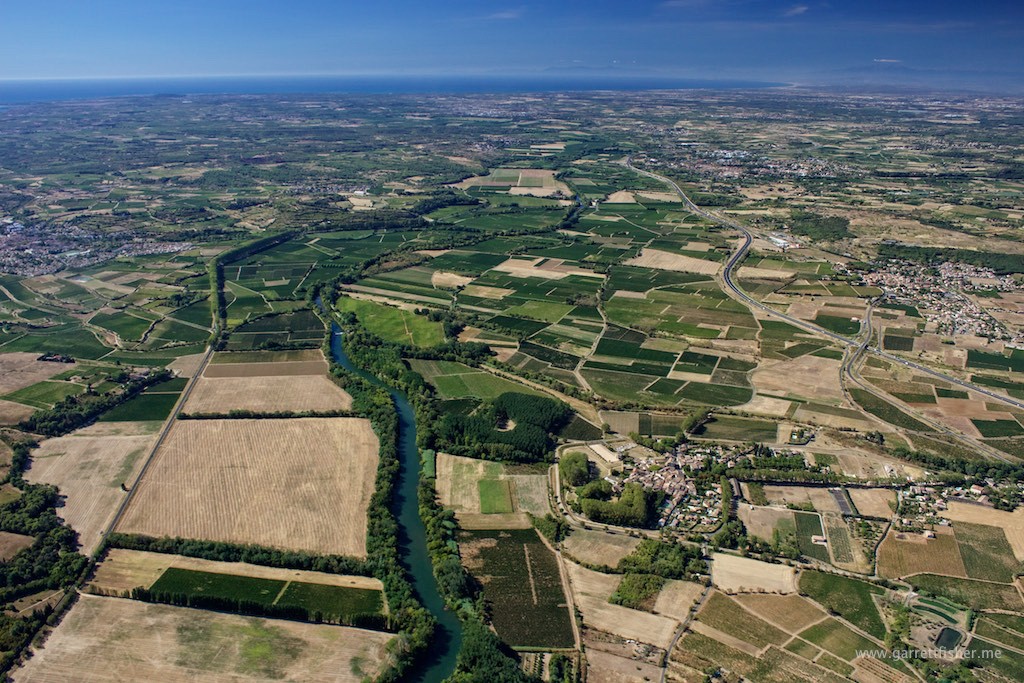 NE of Beziers, Pyrenees on right horizon, Mediterranean on left. 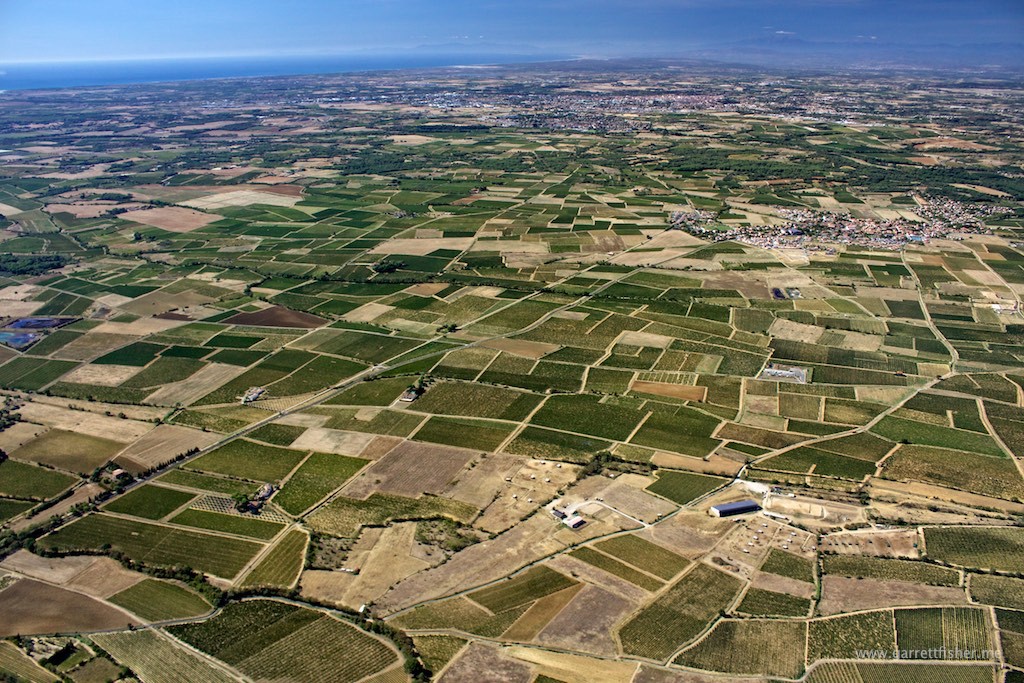 “Only you can prevent vineyard fires!” 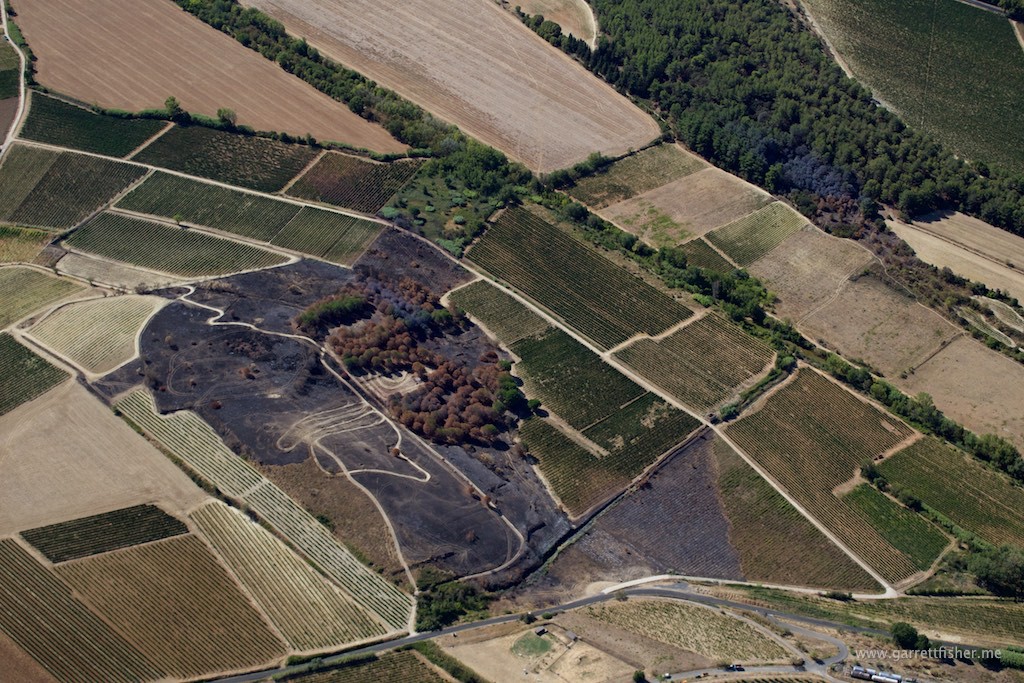 This is just plain bizarre. The French have ongoing national deficits and this is a priority? Then again, let’s not talk about American finances. 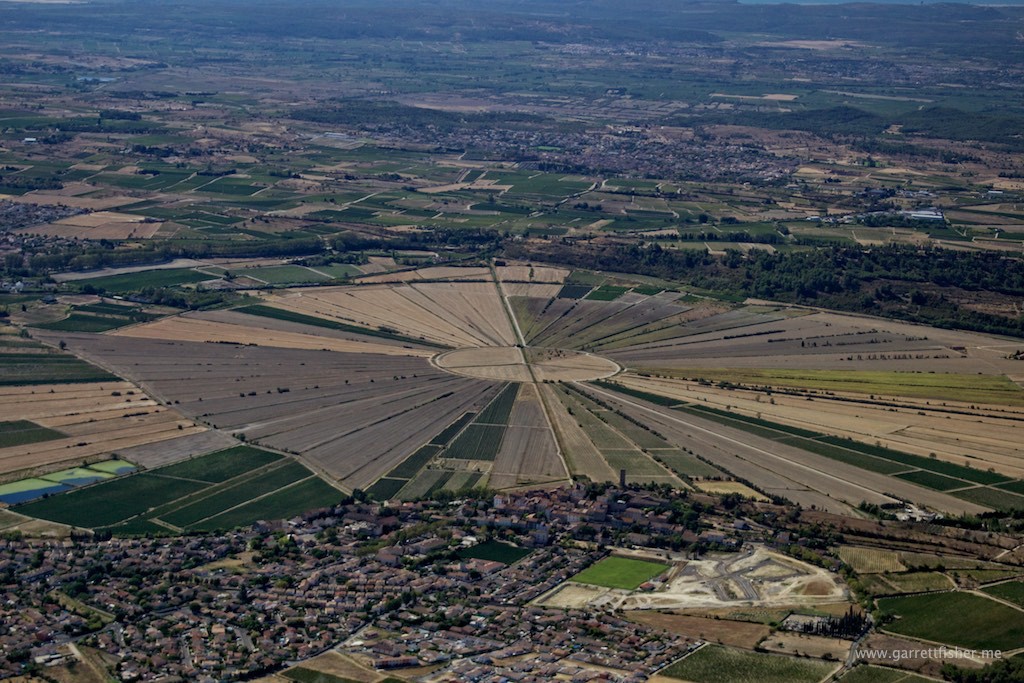 Languedoc region of France. These are all vineyards. 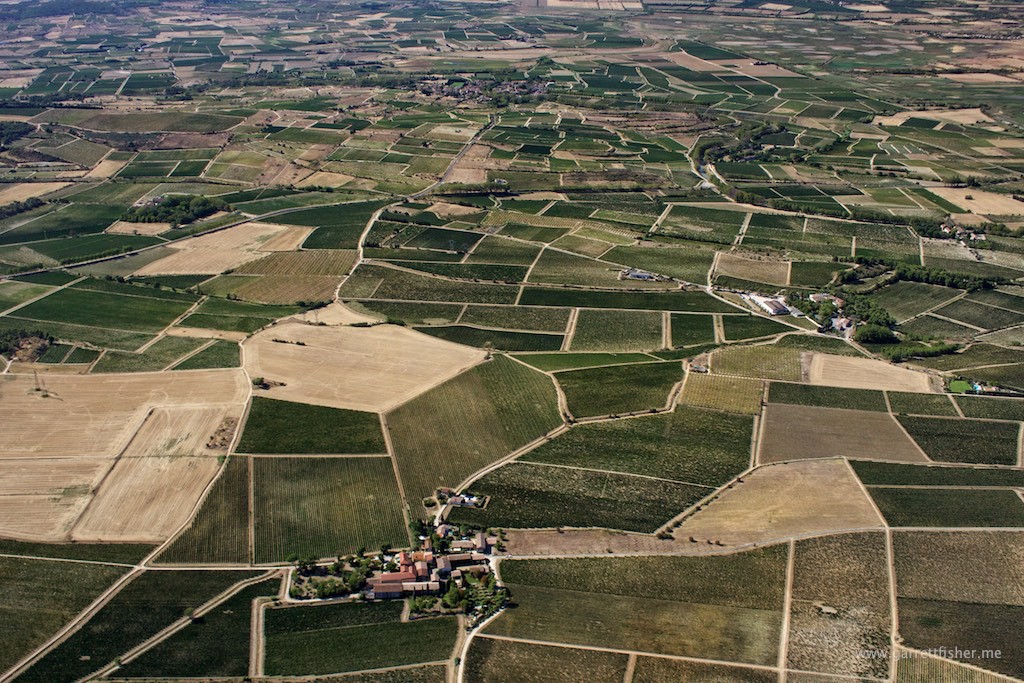 NW of Narbonne, entering La Tramontane wind, Pyrenees in the background. Home is in those mountains, though I need to land first with windmills spinning at obscene speeds. 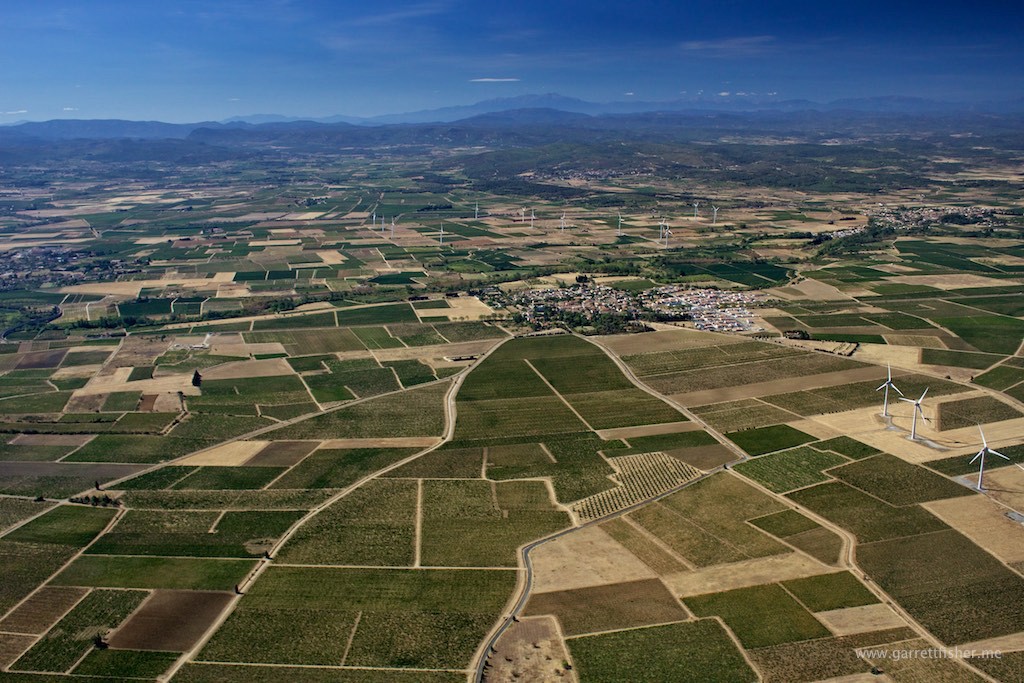 Sneaking under restricted French airspace into the Pyrenees. 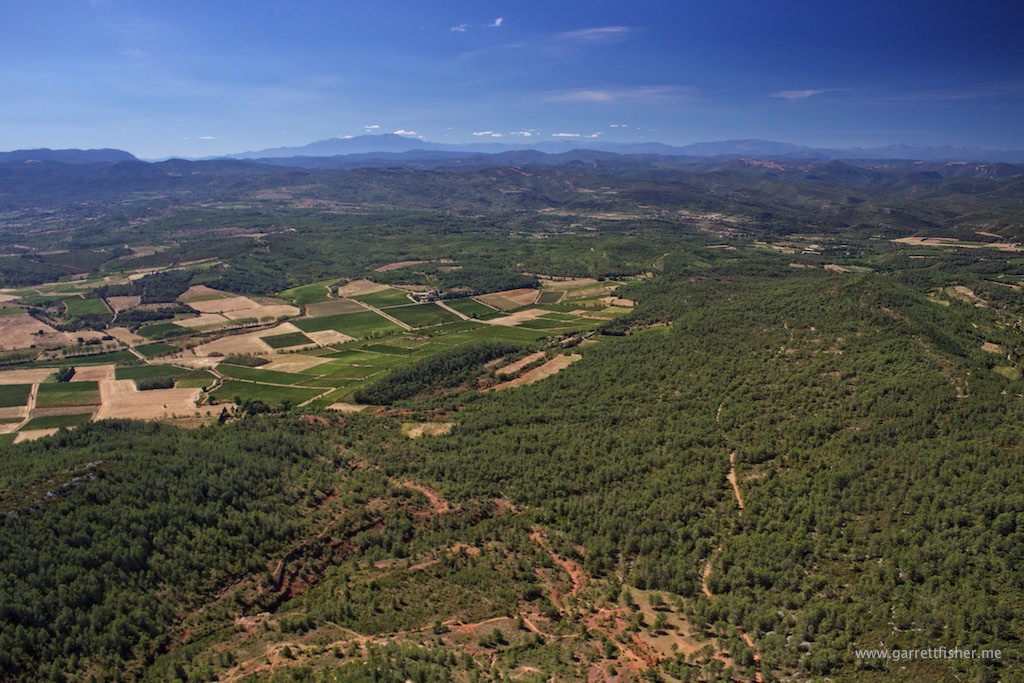 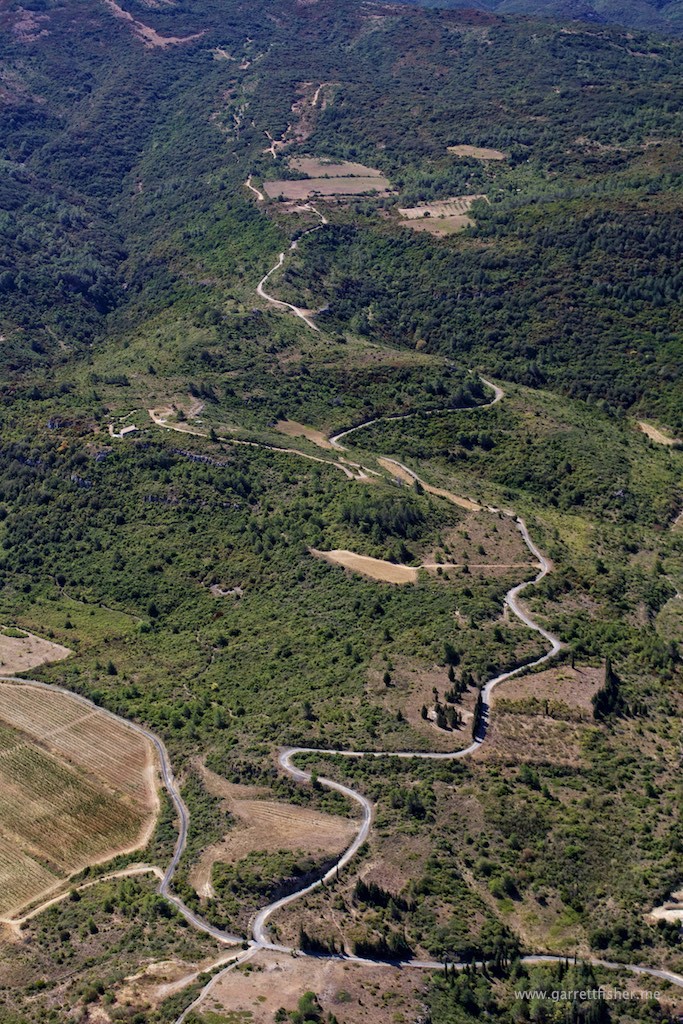 Château de Termes – This is what I love about flying in Europe. In the US, this whole area would be conservation land, lacking ruins from a giant castle built in an enigmatic location. The Europeans managed to preserve the rural and largely uninhabited character of many areas, while keeping interesting things like this stuffed in neat nooks and crannies. 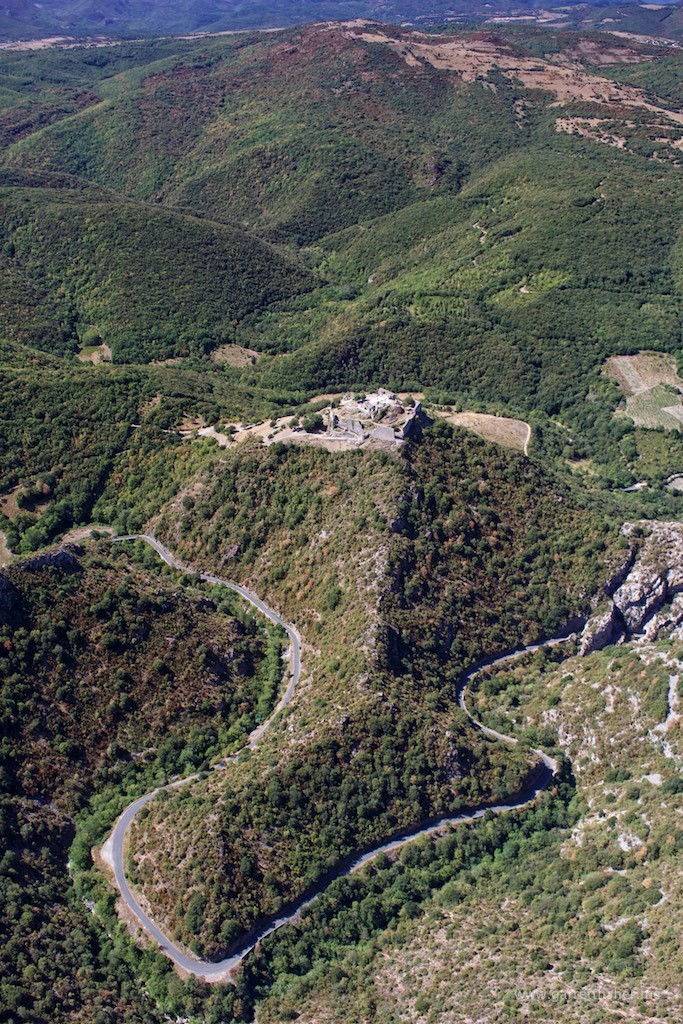 This rock is not labeled on Google Maps. I am heading into the middle of the terrain on the horizon. I haven’t done mountain flying since last year! 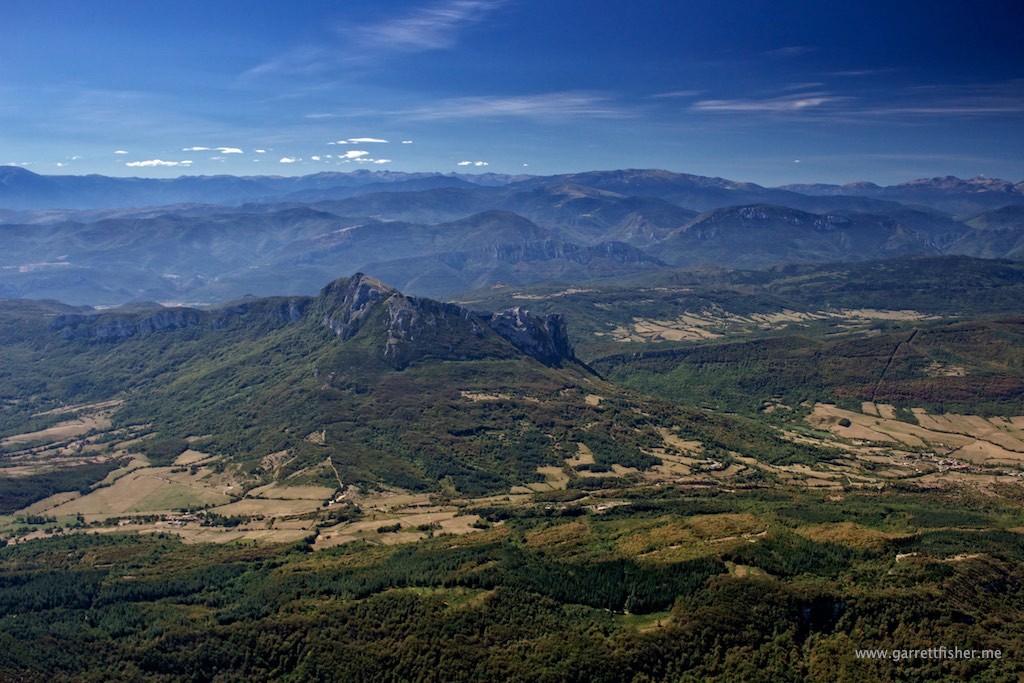 I would think this deserves a name, but apparently not. 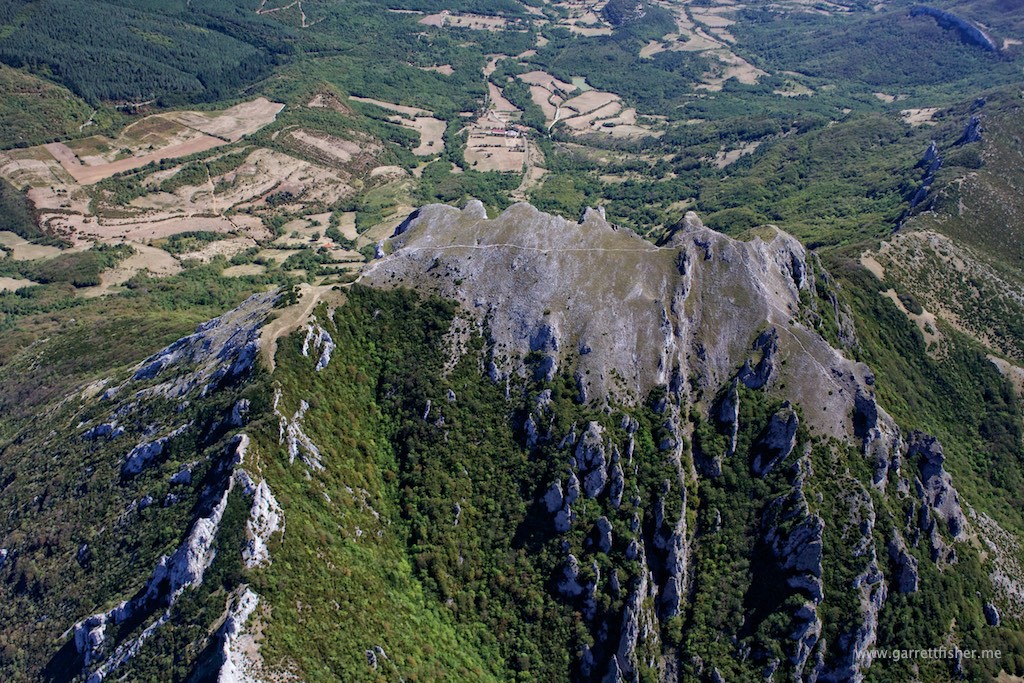 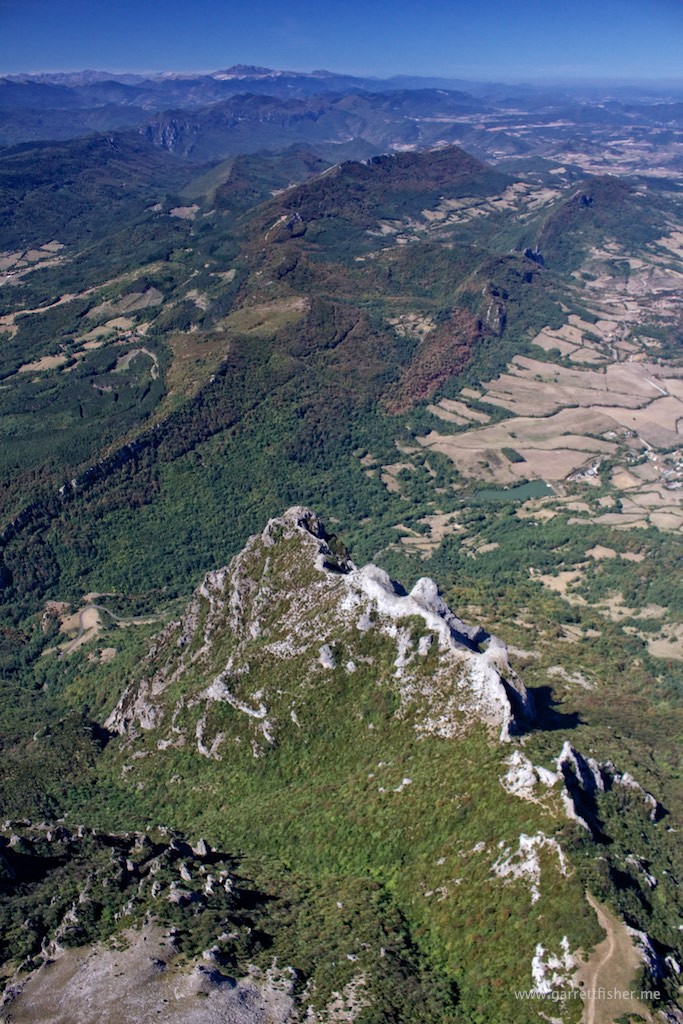 Note the little village, just to the right of the center image. I intend to drive there by car to check this sneaky little place out. 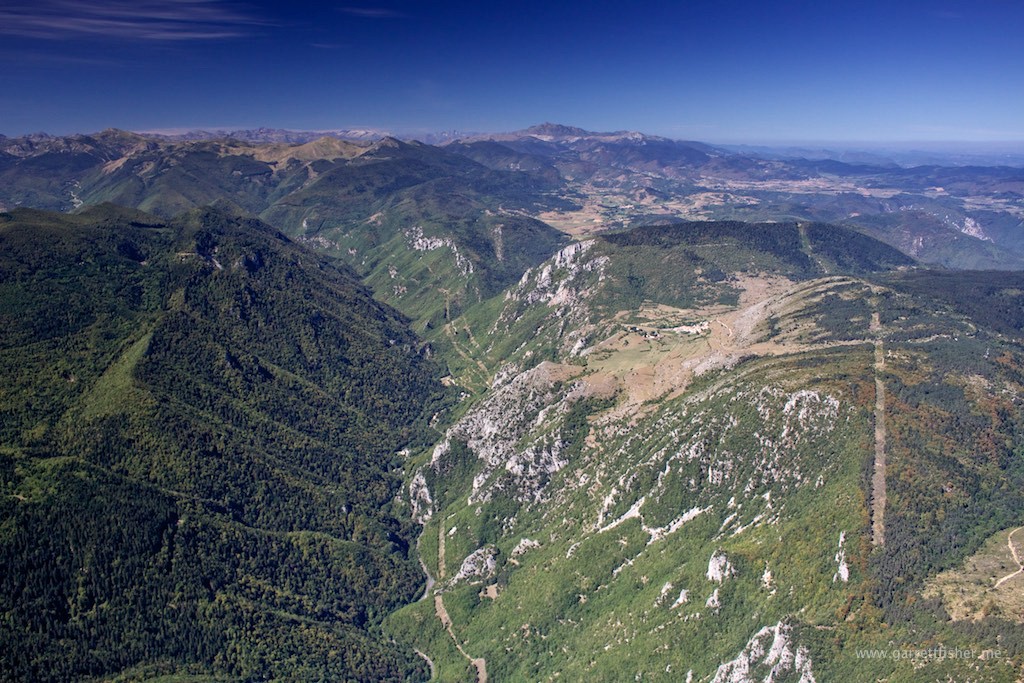 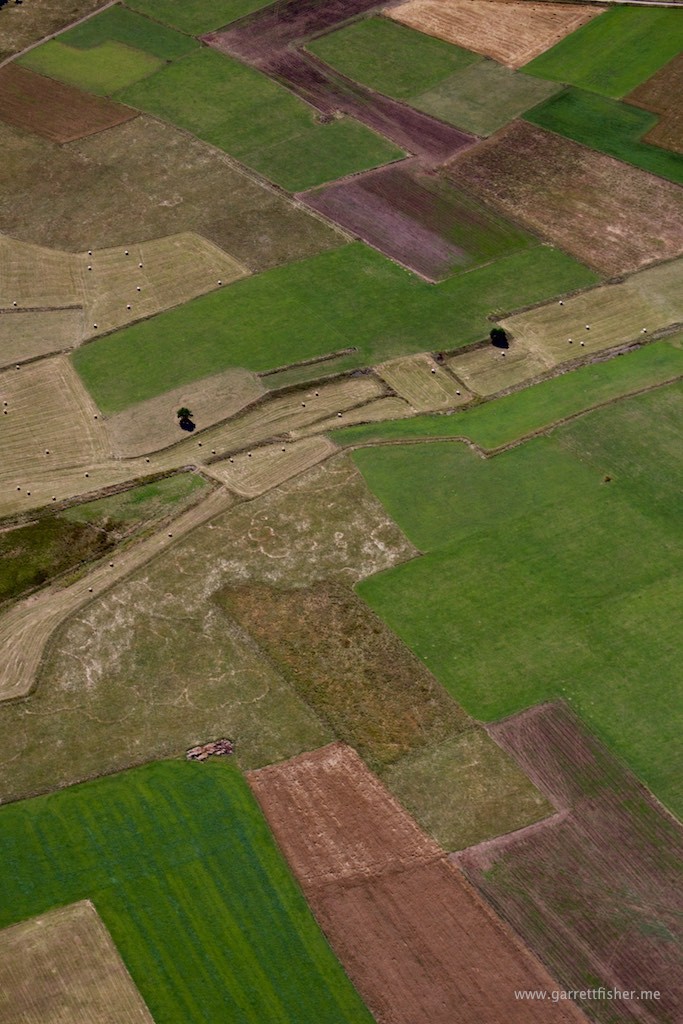 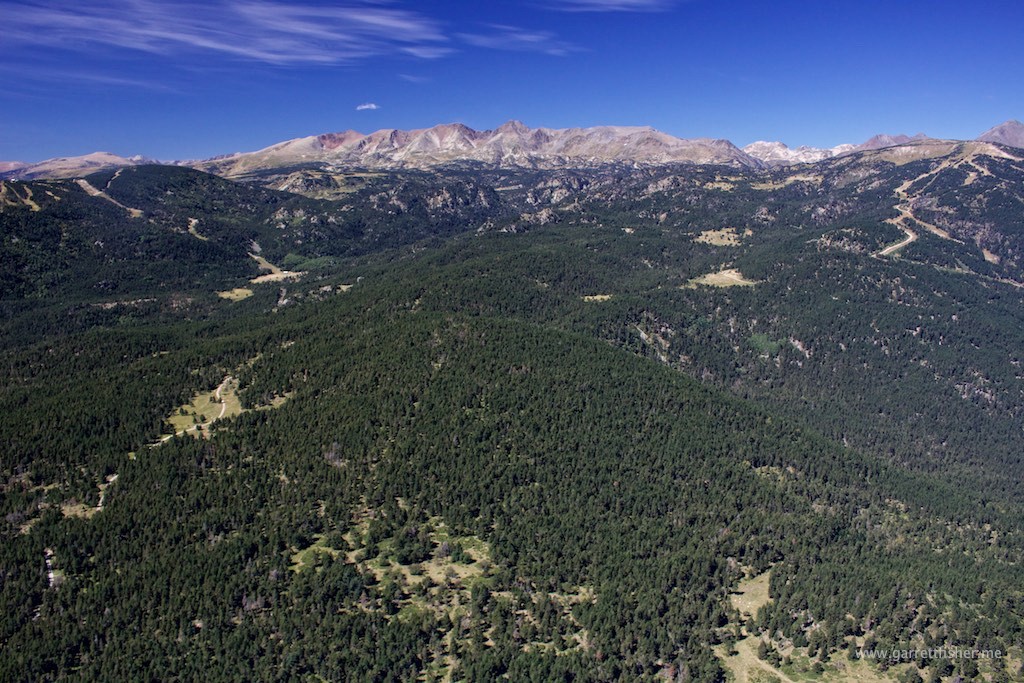 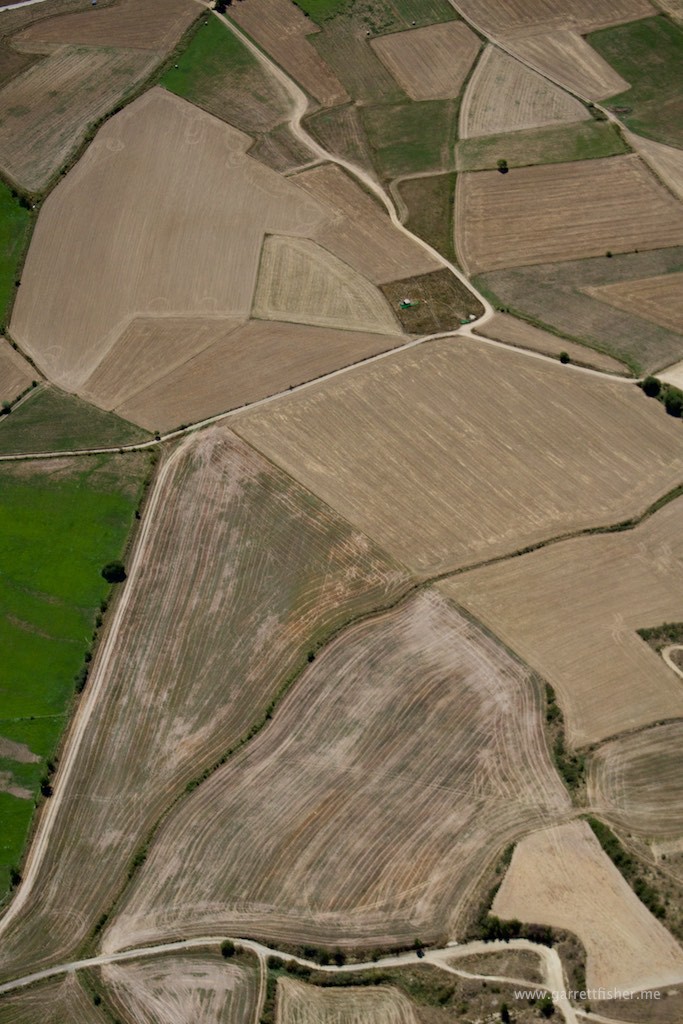 Spain on the hill to the left, France to the right, Andorra over the horizon. 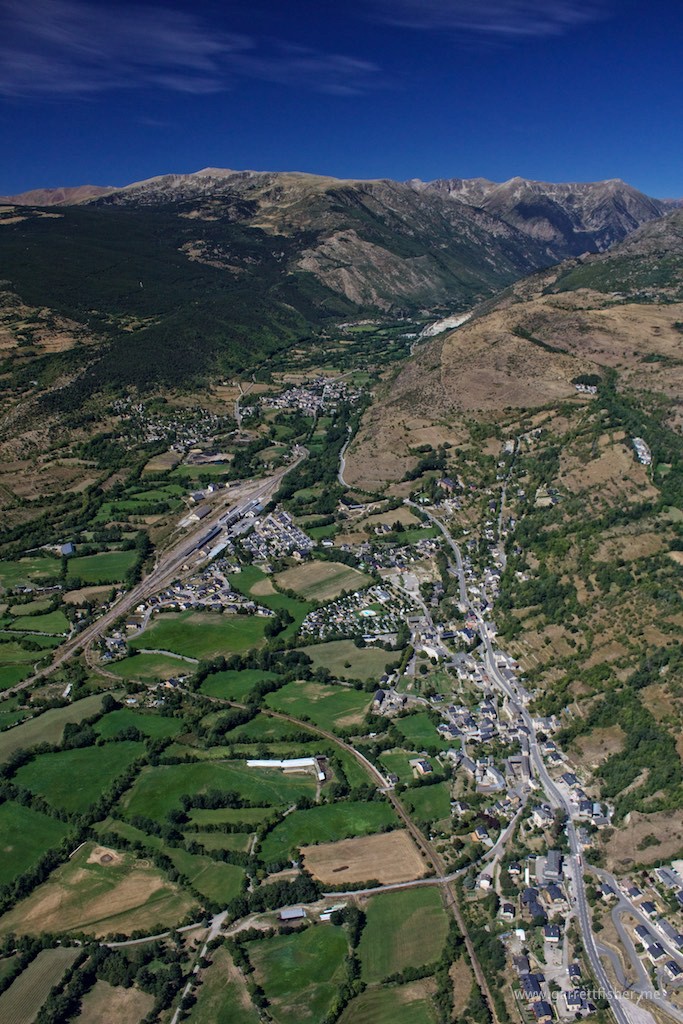 Spain! Getting the crap beaten out of me downwind for 07. Why the heck did I believe someone when they said that ridge produces no adverse wind? Its a peak at 9,500 feet above sea level! 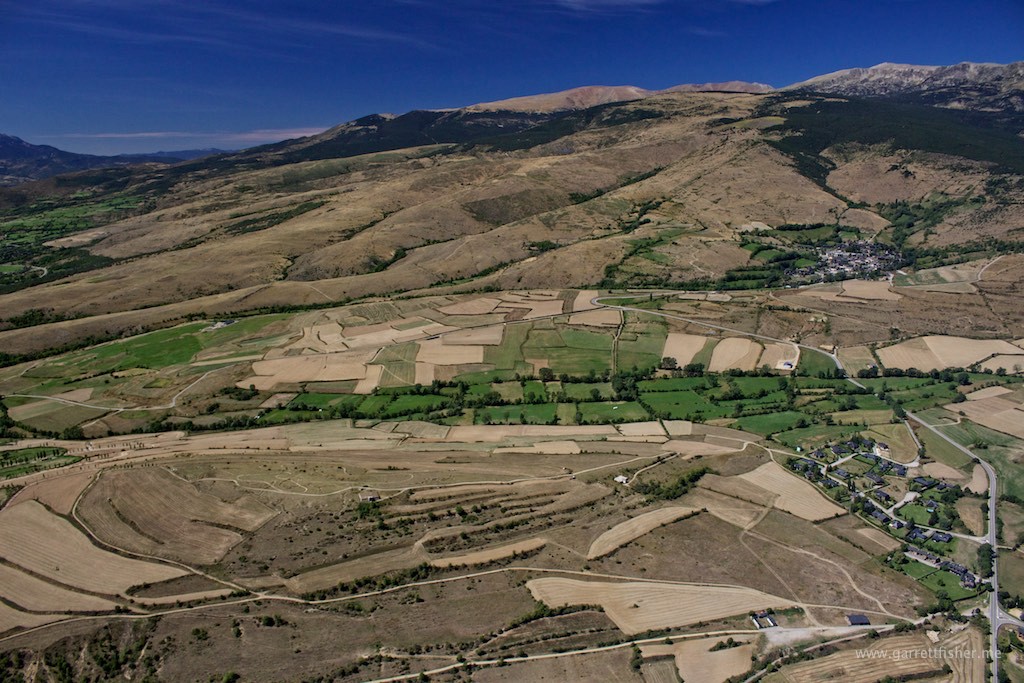