According to the weather forecasts all week, it was not supposed to be decent until Thursday, the day I found myself due to depart from Sandefjord, after the customs skafaffle from the prior day. Rising well before the sun came up, I was pleased to see blue sky develop with some wisps of ground that “surely will burn off soon.” As I took the taxi to the airport, the air got even clearer, to the point that it was resplendent…. except there was some fog hanging out across the runway. I figured it would burn off and the flight would be uneventful.

My weather forecast largely called for good weather down the coast of Sweden, with a TAF indicating fog at Rygge to the northeast, although I would not be flying there. I thought, like much of my experience in Norway, that it would be localized coastal fog. Gothenburg, Sweden was clear, as were areas near Halmstad, my first intended fueling point. Oslo was also in the green. I filed my flight plan, more than one hour in advance, including a series of required points along the coast, given the international nature of the flight.

Things were well and good until I got to the airplane on the tarmac. It was a block of ice. All that coastal fog overnight was freezing fog, which left half a centimeter of ice all over the airplane. For those unfamiliar with the rules, one cannot even takeoff with frost on the wings. It has something to do with “interfering with the flow of air over the wings” which may or may not have deleterious effects on the ability of the aircraft to fly. I turned the airplane perpendicular to the sun to maximize melting, until I realized that the fabric is painted white, which, of all things, reflects heat away. Sigh. I then started up the airplane to see how much heat off the engine coupled with propeller airflow would remove ice from the fuselage and tail. The answer? Not much.

After 30 minutes of pacing, monkeying with pre-flight, loading my stuff, and otherwise getting impatient, I started pushing the ice off with my bare hands. It had begun to melt, which meant I didn’t explicitly need to scrape it, I just needed to wipe it to come off. Having covered the bulk of the wings and control surfaces, I noted that the fog that was “certain to burn off” was now growing and oozing toward the tarmac.

Noting that other aircraft were taking off, a delightful mix of airliners and small aircraft, I realized that the tower would permit a midfield takeoff with fog behind me. Nervous that I was about to takeoff in a possibly marginal situation, to fly down a rocky coast in two countries I have no real flying experience in, in an aircraft I just bought, one that I only have 35 hours of flying time in the model anyway, I did what I did when I put a damaged J-3 back together, and after reassembling my PA-11 in Germany after shipping: waited a moment, and then gave it full power.

After clearing some fog ahead, which maxed out at 200 feet, I veered to the right to avoid another clump while climbing. Upon clearing the top of it, I was greeted, not with small patches of morning mist “certain to burn off,” but solid overcast below me, as far as the eye could see to the north, northeast, east, southeast, south, southwest, and west. In the northwest, some terrain was above the fog. While I knew that I could a) make a somewhat involved return to Sandefjord or b) divert to other VFR airports in Norway, I had a wave just shy of panic. It was a revulsion against everything I thought was sensible.

My first thoughts were: “this is not an emergency. You’ve got time to decide.” The second was: “If you don’t get the hell out of Norway, you’re not leaving until March.” ATC was happy to tell me to fly east, have a great day, and carry on to Sweden, like this was normal. I followed his commands while staring at the map, before calling Oslo Approach. I asked for confirmation what areas of Sweden were still VFR. I also asked for 5,000 feet. The higher, the better, in case anything goes south (even though I was trying to go literally south).

Cleared to 5,000 feet, I could see that the fog stopped some 20-30 miles out over the ocean. The controller came back with a still CAVOK reading at Gothenburg, so I decided that “At worst, it will be VFR on top for 90 minutes. It is highly unlikely that the engine will quit on this flight.” My next concern was Oslofjord, a nice batch of water which I was crossing (that I could not see). With a life jacket on board, I happily got to the other side, realizing that, should the engine quit, I could now smack a rock in the fog instead of cold salt water.

Once I got to the other side, after about 20 minutes I could see that the cloud deck eventually would come to an end on the horizon. I then calmed down, happy to finally be pointing south, each bit of time and distance closer to longer days and farther from foul weather.

Before Gothenburg, I encountered a small front, which meant diving down to 700 feet below the clouds. On the other side, headwinds became hazy tailwinds, with sun that gave way to high overcast. It helped to have a pilot friend in Ireland watching webcams and live reporting what was ahead. I fueled at Halmstad without incident.

At that point, I had to decide where to spend the night. I had enough time to get to Germany, but there were sufficient IFR observations that I would only get over the water to the northern border areas. The more I looked at it, coupled with forecasts for the next morning, the more I wondered why I was trying to punish myself with an extra night of German rules. I noted Lolland Fester in Denmark, just before the water crossing. Since operating hours looked tight, I phoned ahead, and the airport manager was unbelievably welcoming. I told him: “Coming to your airport for the night sounds much easier than Germany.” “Oh, it is much easier than Germany here!” “Ok, I’ll be there at 15:00.”

Halmstad to Denmark featured lowering ceilings, mildly reducing haze, and stronger tailwinds. I crossed the Øresund Strait into Denmark, flew south along the west side of Copenhagen, out over the water due to special VFR at Roskilde CTR, then southwest through the countryside to Lolland Fester. The faster I went due to increasing tailwinds, the happier I was until…. I deduced that the runway “might” be oriented as crosswind. Let’s at this point acknowledge that the Irish friend had warned of this possibility while in Sweden, which I ignored. “You’ve handled your fair share of crosswinds before,” I thought to myself. “But this is a new plane.” Since I had plenty of fuel, there were options.

Approaching the field, the airport manager stressed more than once on the radio that crosswinds were 13 knots. Overflying the field at rip roaring speeds, I began to get uncomfortable. “Well, maybe 13 knots is gusty and I can find a gap.” Nope. The place is flat as a pancake with few trees. The windsock was straight out…no gusts…just relentless wind. Final featured a heavy crab into the wind. I notched half flaps and veered for a glider grass strip on short final, as grass is more forgiving in such wind. Touching down on one wheel, the Super Cub’s added weight was evident, and it settled down nicely in such wind. I then taxied to the ramp, fueled, and was kindly offered a hangar for the night, considering the strong winds and coming rain.

The Danish Police wanted to do an immigration “spot check,” to which the airport manager drove me to the station, then after a friendly scan of the passport and residency papers, off to the hotel for the night.

Frost on the inside, ice on the outside, with a tad of harmless fog across the runway. 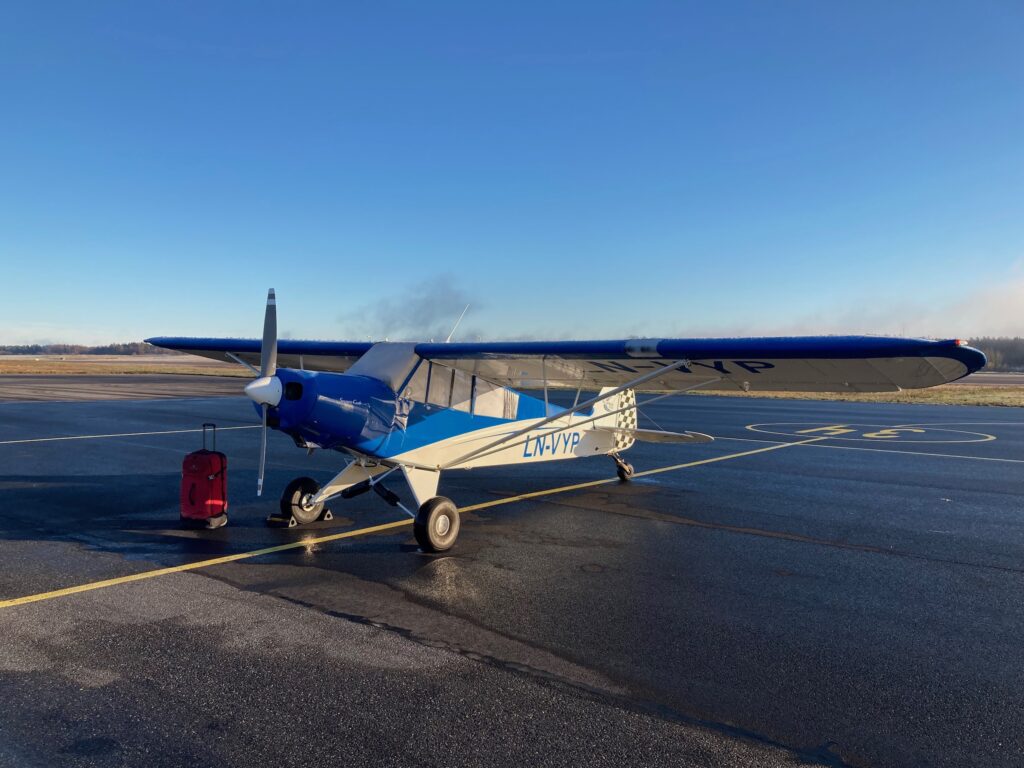 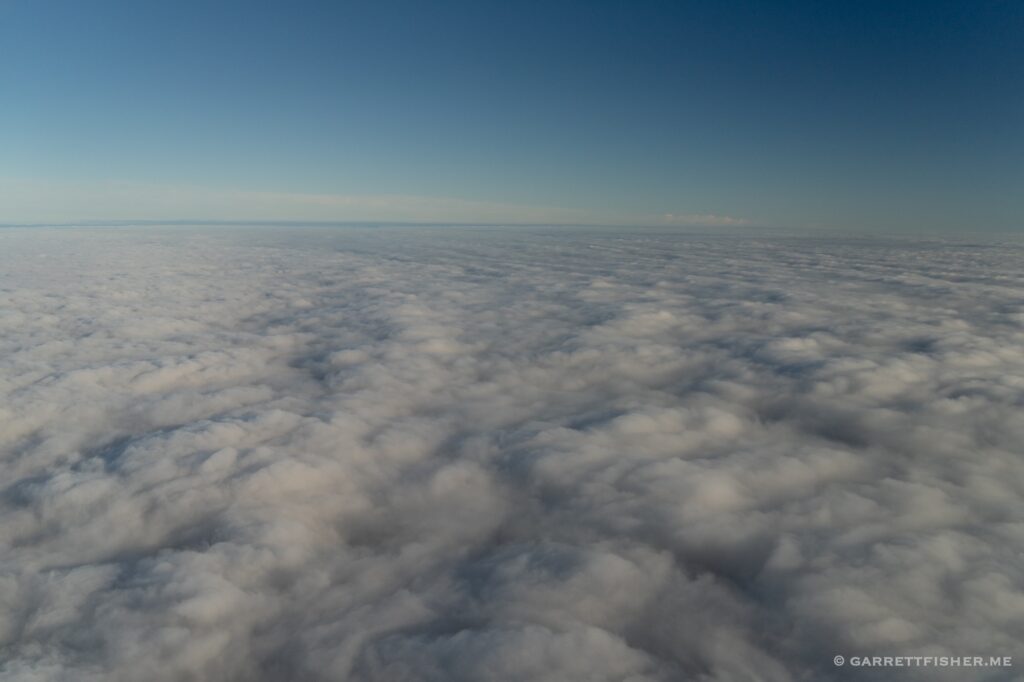 Border of Norway and Sweden. 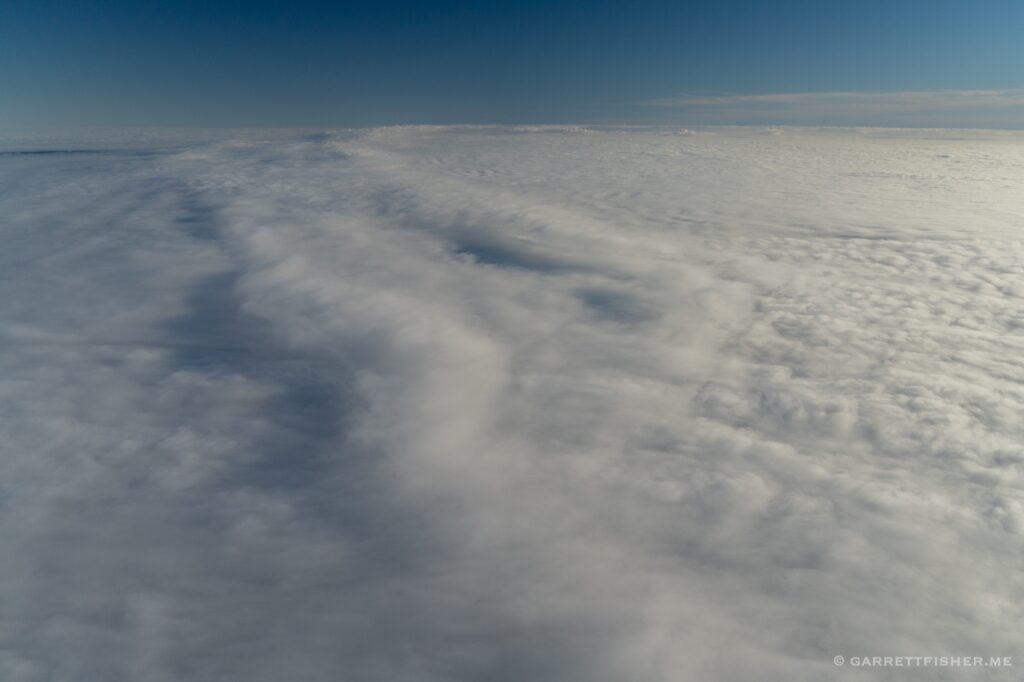 Some improvement with the VFR on top business. 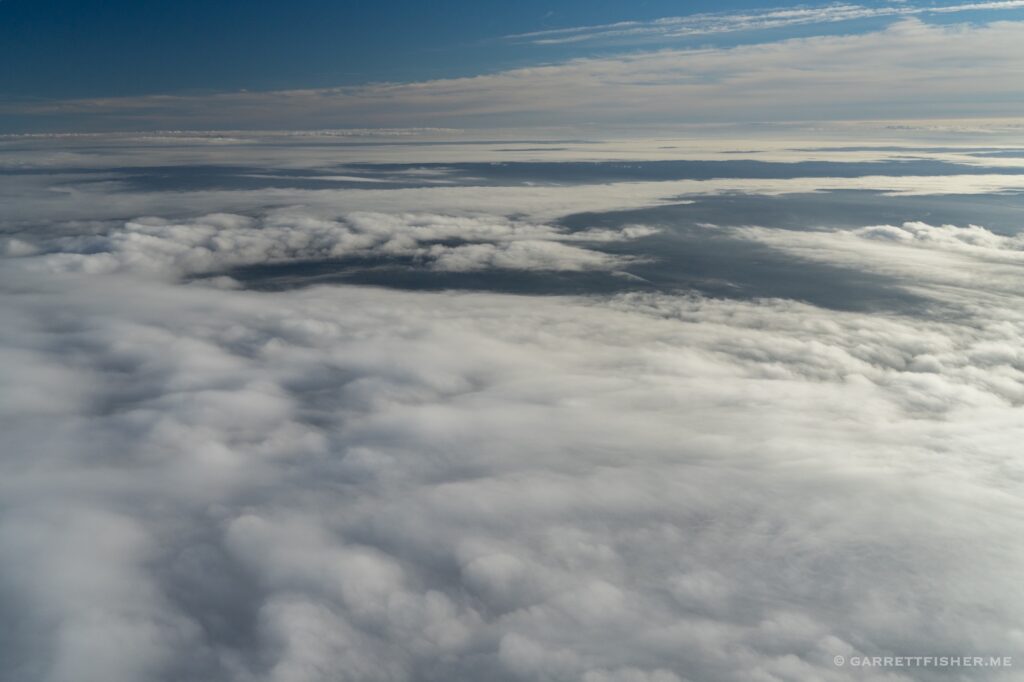 Cruise descent to a reasonable altitude. 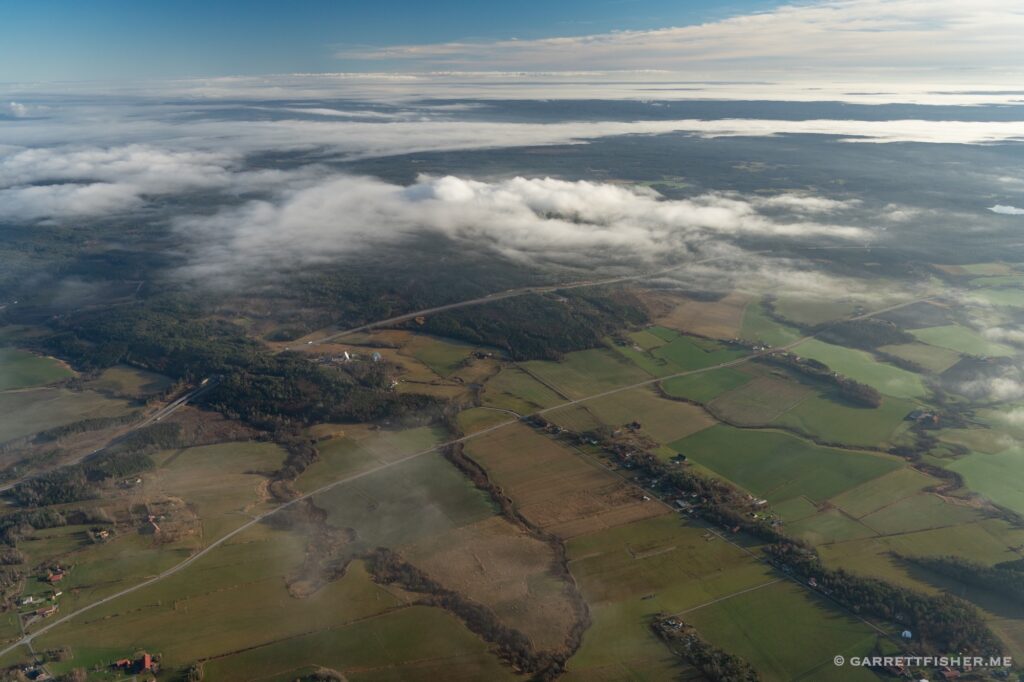 The Coast of Sweden. 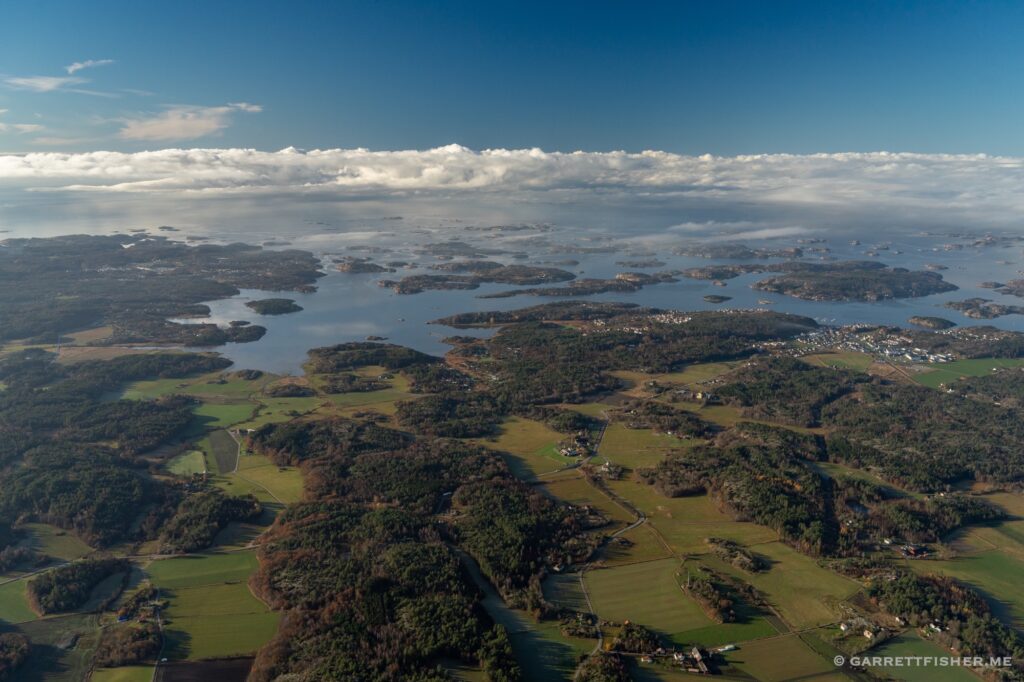 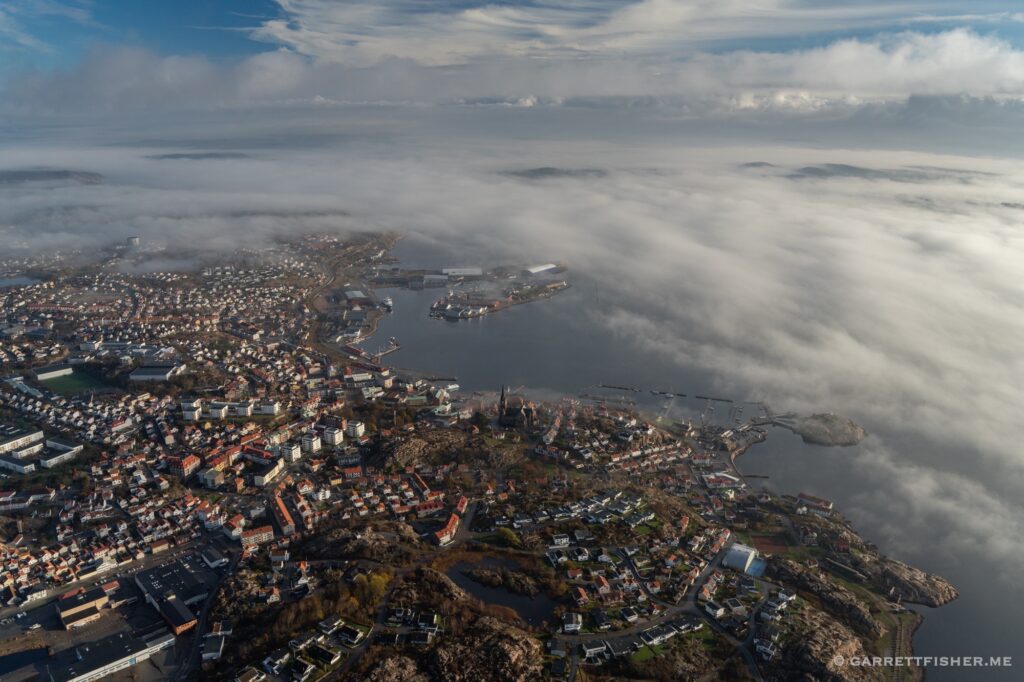 Ticky tacky houses all the same. 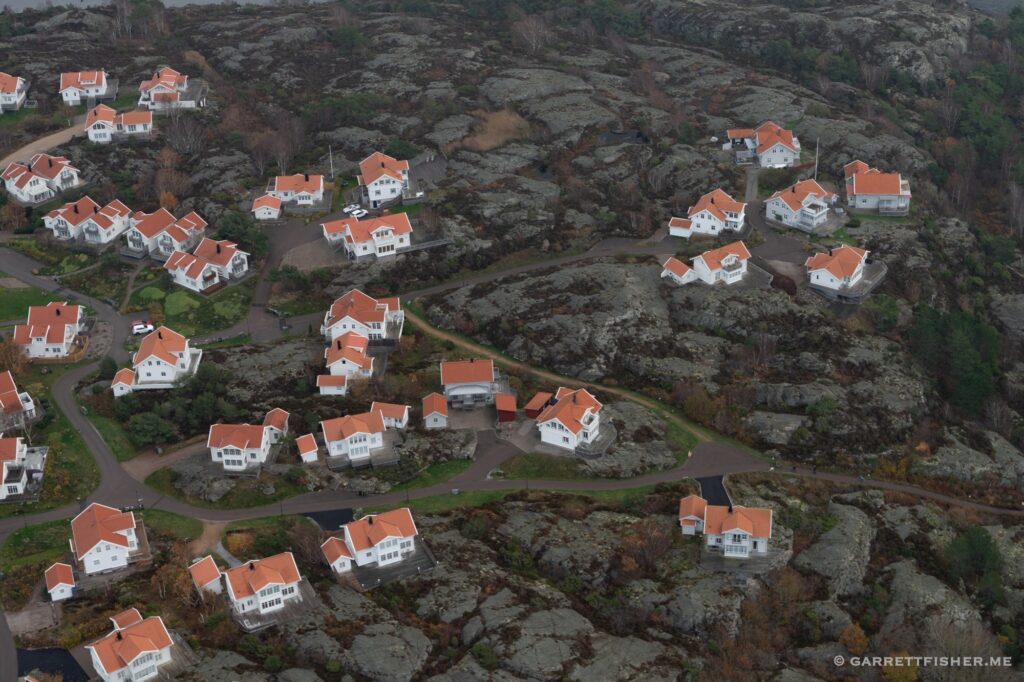 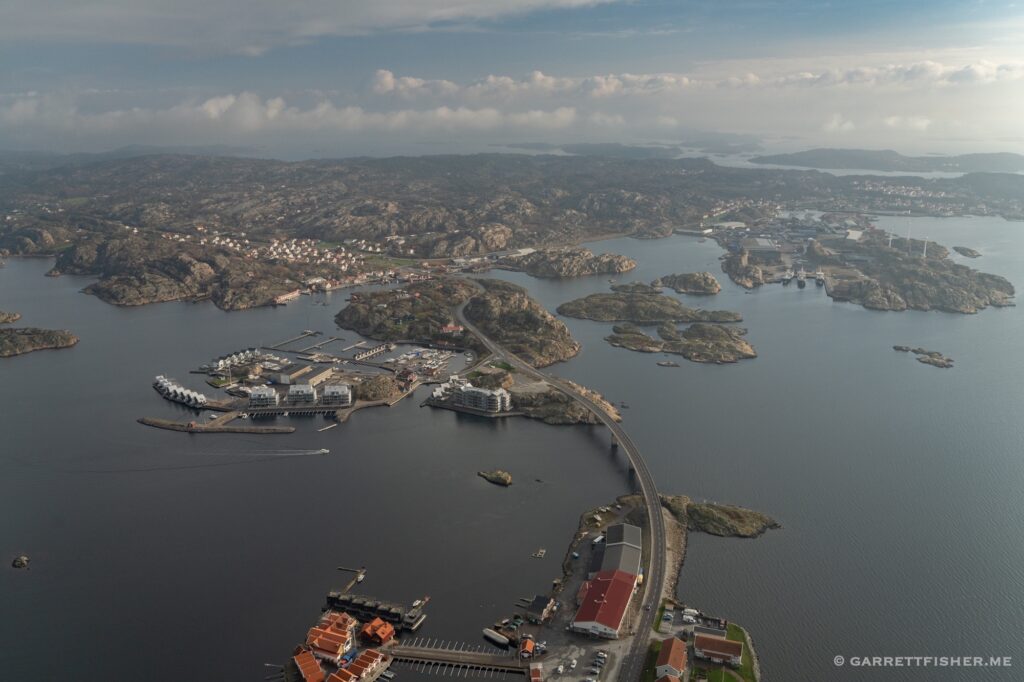 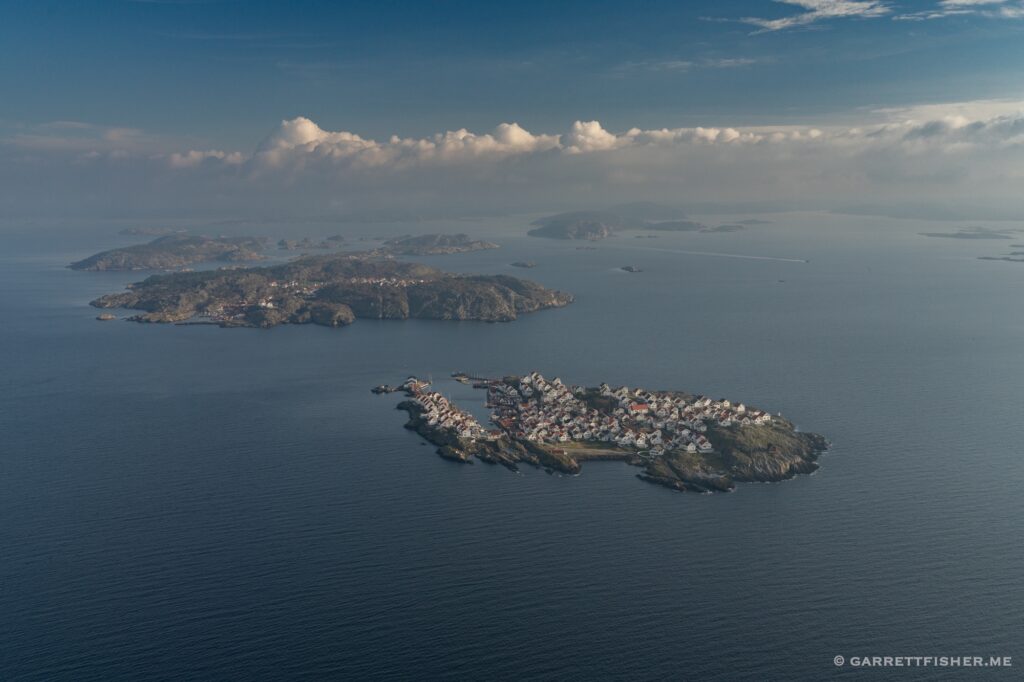 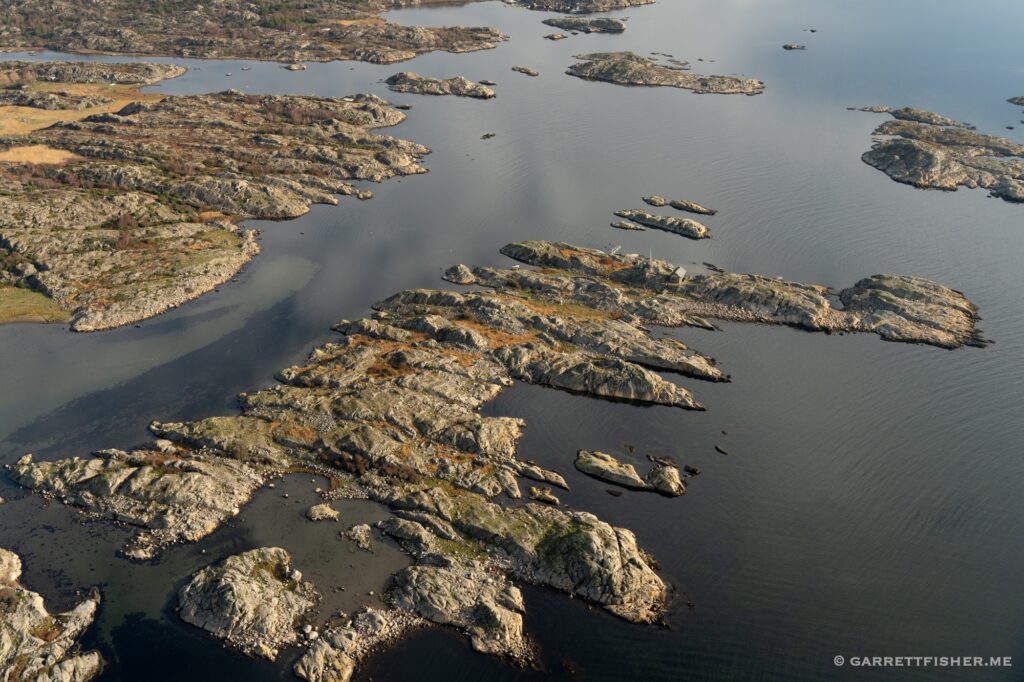 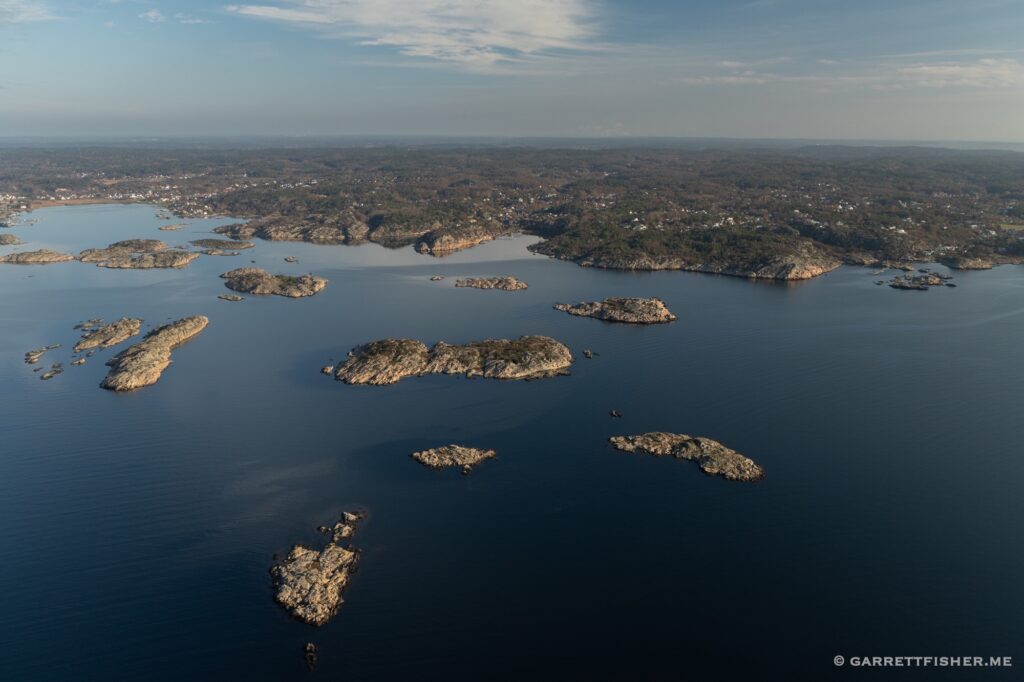 Varbergs Airport (on the right). 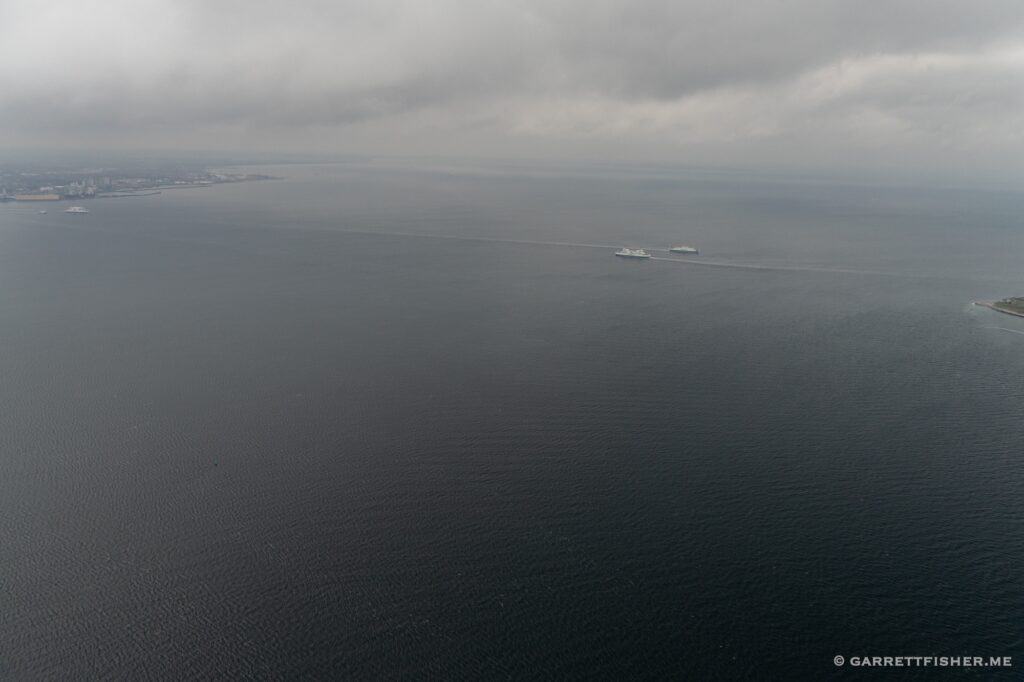 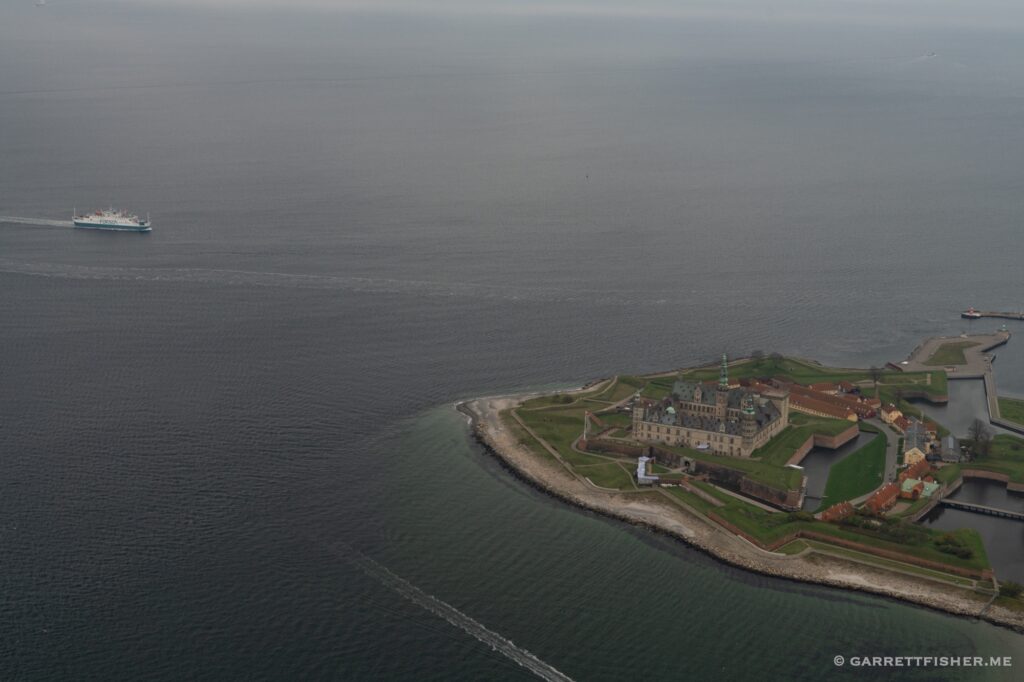 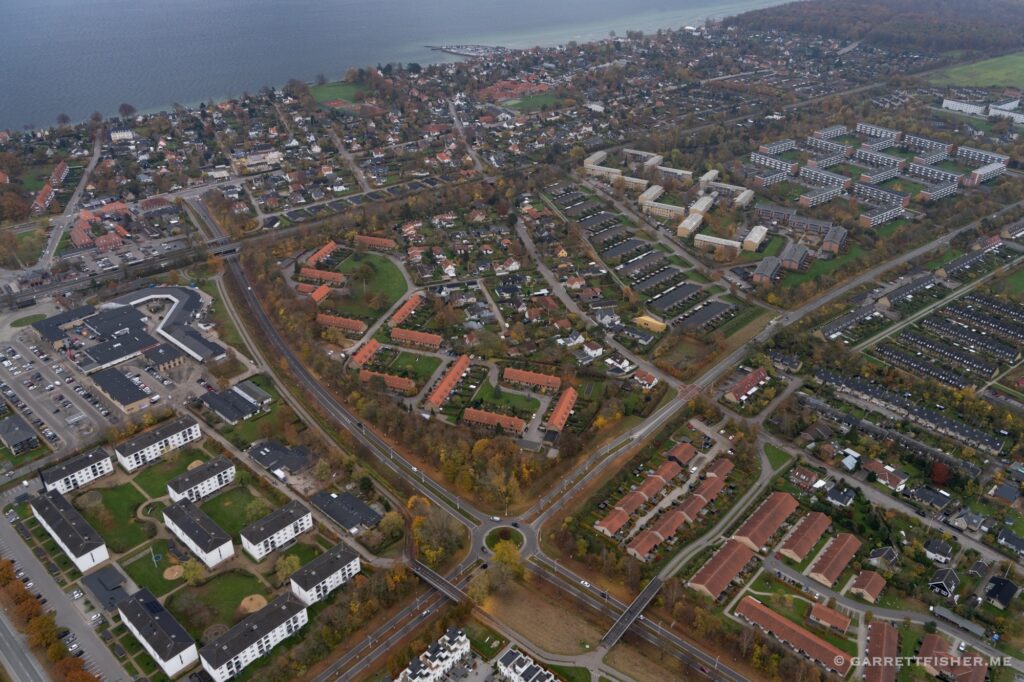 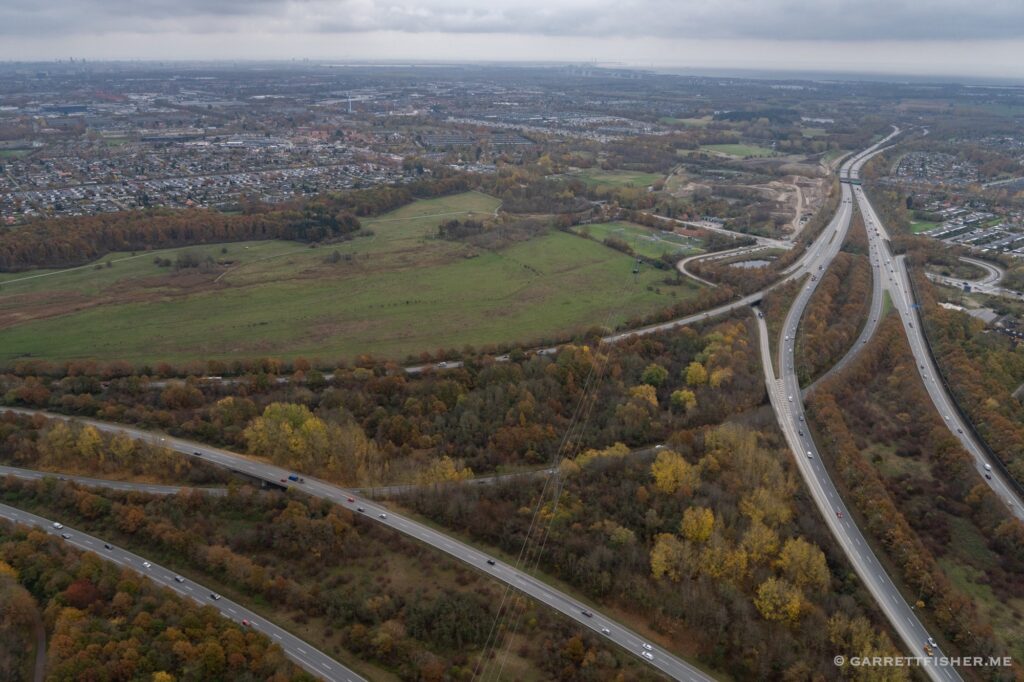 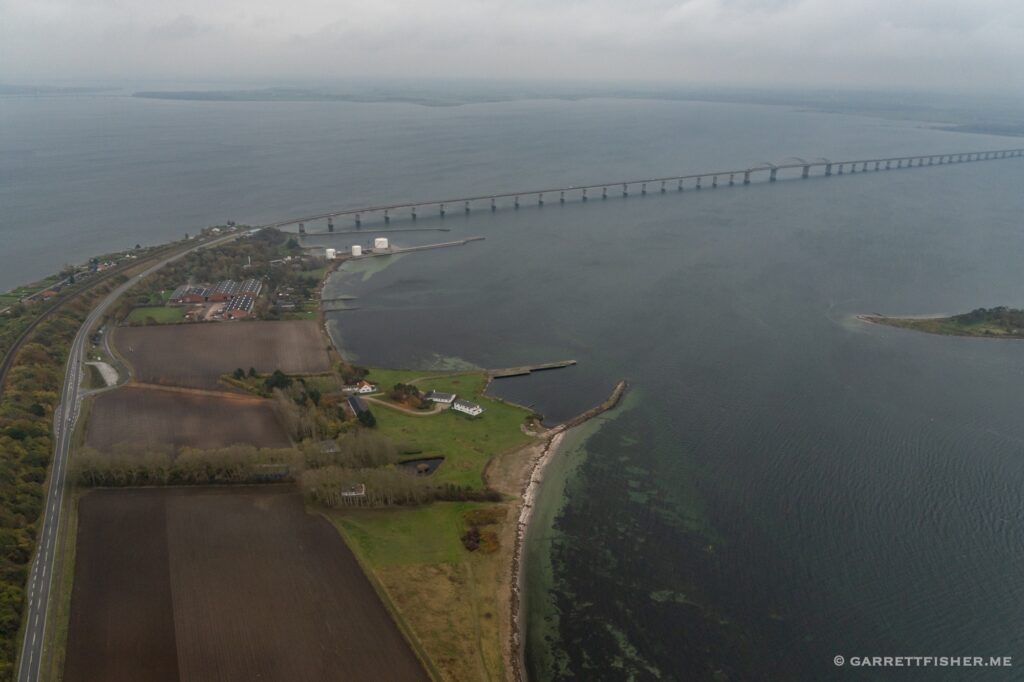