If you can’t tell, the designation of the post implies that it was a day of contrasts. The whole thing got started with this half-baked idea to do a second edition of my Colorado 14ers book. The entirety of the 14ers was photographed in fall, winter, and spring, with nothing in the summer. I also wanted to get the Colorado glaciers for a separate book project, as well as more photos of the western continental divide, for yet another project. So I got this grand idea to do something like 1400 miles of flying in two days, photographing the entire time.

The forecast was for full sun, with some bit of a “breeze” at the altitude of the 14ers. Departing the Star Valley, visibility was illustrious, a product of a strong cold front. Weaseling down into southern Wyoming, that changed as haze became evident. “It’ll be better at high altitude.” It wasn’t. To make matters worse, I had to urinate with a painful profusion heretofore never experienced. There were airports without fuel along the way, though it’s a good 30-minute turn around to land, power down, use the facilities, start up, and go, so naturally I opted to suffer. Crossing the eastern side of the Uintas Mountains in Utah, insult was added to injury with severe turbulence, making the thought of my kidneys exploding all the more realistic. I landed at Vernal, Utah, as planned, bent over waddling to the bathroom, snapping like I had PMS at anyone that wanted to have aimless, self-evidently obvious conversation about my lovely antique airplane (“that’s a really nice airplane.” “Is that a [insert anything but PA-11 here]?” “You flew here in that?”)

The flight into Colorado was long, as the terrain variability in the NW section is nil. By the time I got to the first 14ers in the Elk Mountains near Aspen, it had been 6 hours. To make matters worse, a thunderstorm (forecast: mostly sunny) formed in between Capitol Peak and me. Go figure, the only t-storm on radar in the entire state, and its over the exact 14er I planned to start with and its here precisely when I arrived, and there shouldn’t even be one at all. Winds were also bumpier than expected and quite a challenge to find an updraft. Clouds were abundant, which I usually don’t like at all for photography purposes. In order to safely photograph the peaks, I had to come up the wilderness side of them to stay upwind, accepting the reality that while I would definitely be not dead in an emergency landing, I would be in a really, really rugged place that would be quite a challenge to get out of (while helicopters and rescue gear exist, I plan all flying with the expectation to land, survive unharmed (even in the event of aircraft damage), and walk on my own through whatever terrain to people or a road). It was a rocky ride, though the heaven part starts to come in now. The scenery was quite simply stunning. The Elk Mountains are some of my favorite in the state and there were fantastic contrasts, textures, and colors, something unavailable during winter.

There were a few hairy moments around the Maroon Bells and Pyramid Peak, where I got caught on the lee side for a short period (read: downdraft of prodigious proportions). While getting literally flushed out into Aspen Airport’s airspace was a remote option, it really wasn’t a path I wanted to go down; thus, I was able to hug some terrain to generate neutral wind, followed by an updraft and then head east toward Conundrum Peak. After completing the Elks, I cruised toward La Plata Peak, noting on my iPad that winds at altitude were well in excess of 30kts, which is extremely unsafe. So much for the 22kt forecast, of which upper level wind forecasts are usually accurate.

As I expected, the winds restored to a reasonable level over the Sawatch Range, so I continued my work with Mt. Elbert and Mt. Massive, then landed at Leadville for fuel. Showers and thunderstorms that weren’t supposed to happen were now plaguing the Sawatch Range, which was my intended target, so I opted to get the Mosquito Range and then decide what to do. The storms were visible 30 miles to the south, so I opted to go to Pikes Peak while in flight.

Pikes Peak is visible from a good portion of the state. It almost always looks like its “just over there.” It took an hour to get there, and an hour to get to the central Sangre de Cristo range, crossing some developing showers in the process. While I would usually skip such a far flung 14er for a second edition (due to hours of flight involved), I really wanted to get some better shots of the peak as it looms above Colorado Springs, with well over a quarter million people staring at it on a daily basis.

Crossing the Sangre de Cristo Range should have been difficult. It was not. Clouds were low over the highest peaks, and I was coming from the lee side into the wind, which usually doesn’t work. It was fine. However, upon getting into the San Luis Valley on the west side of Great Sand Dunes National Park, many miles past the mountains, and still well above the ground, I encountered borderline severe turbulence, for probably the 6th time that day. There was absolutely no reason for such angry wind, as it was sourcing from a flat spot, not crossing any terrain. The wind was also doing highly strange things, twisting and pointing the airplane in strange ways: not just left-right or up-down, but multiple axes of movement at once, which was a first. I never did find out what was causing it, as the sky was partly cloudy and surface winds 9 knots. Between the turbulence, storms, and now clouds parked solely over every single 14er in the Sangre de Cristo Range, I was highly pissed off.

I landed at Alamosa, CO airport, which although it had an airliner come in, was unattended for general aviation purposes. Yes, there was a manned fire truck sitting on the taxiway, just in case an airliner crashed, but there was no one to fuel an aircraft! No fuel until tomorrow morning. That, and the storms were still over the Sawatch Range, though I could see the Sangre de Cristo 14ers basking in sun, and thoroughly unreachable due to lack of fuel. Coitus interruptus! I checked the weather, which called for nice conditions the next morning, and decided to get the Sangre de Cristo 14ers in the morning, head west to the San Juans, and then out to the confluence of the Green and Colorado Rivers in the canyon lands of Utah, for the Green River book. This was a total change of plans, as my original plan was to sleep at Leadville and head up to the glaciers in Rocky Mountain National Park. Save that for the next trip….

Given the misery of the day, I got a hotel and slept in comfort in Alamosa instead of being ghetto and pitching my tent in the weeds. While it was a frustrating and bumpy day, I did photograph 17 of the 14ers, and I was at the farthest point of the whole trip. As a friend of mine in Alpine said, “If it was easy, somebody would have done it already.” 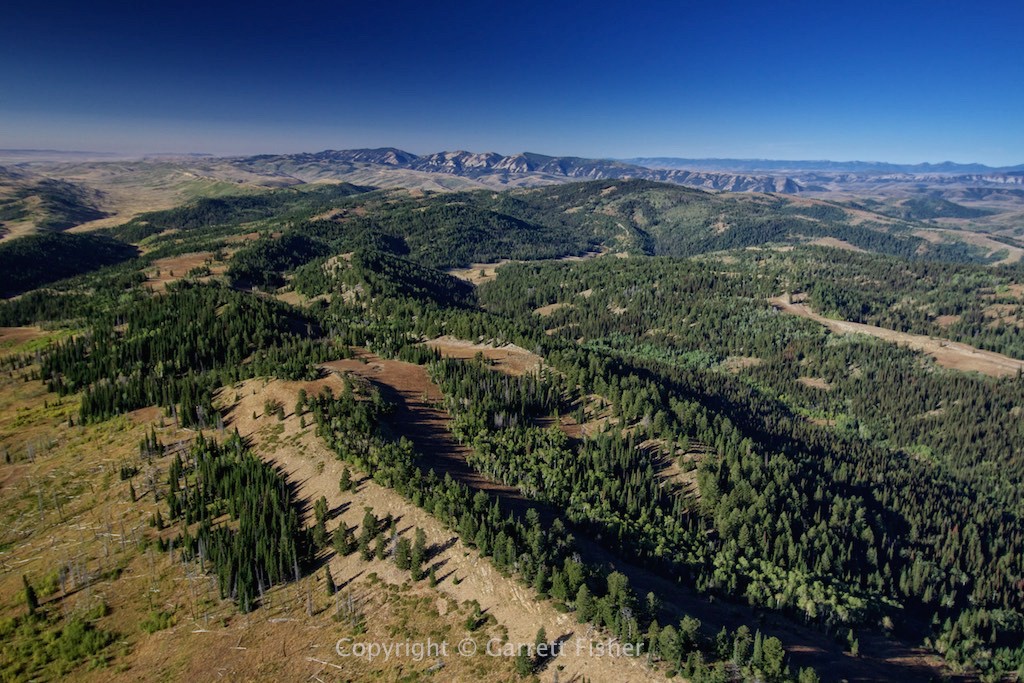 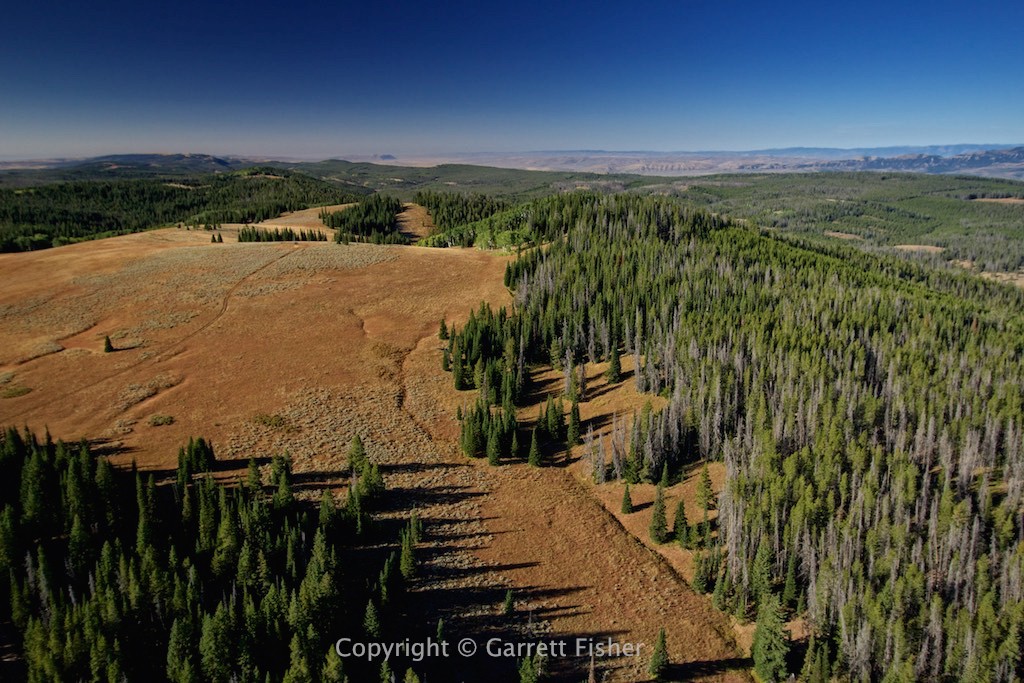 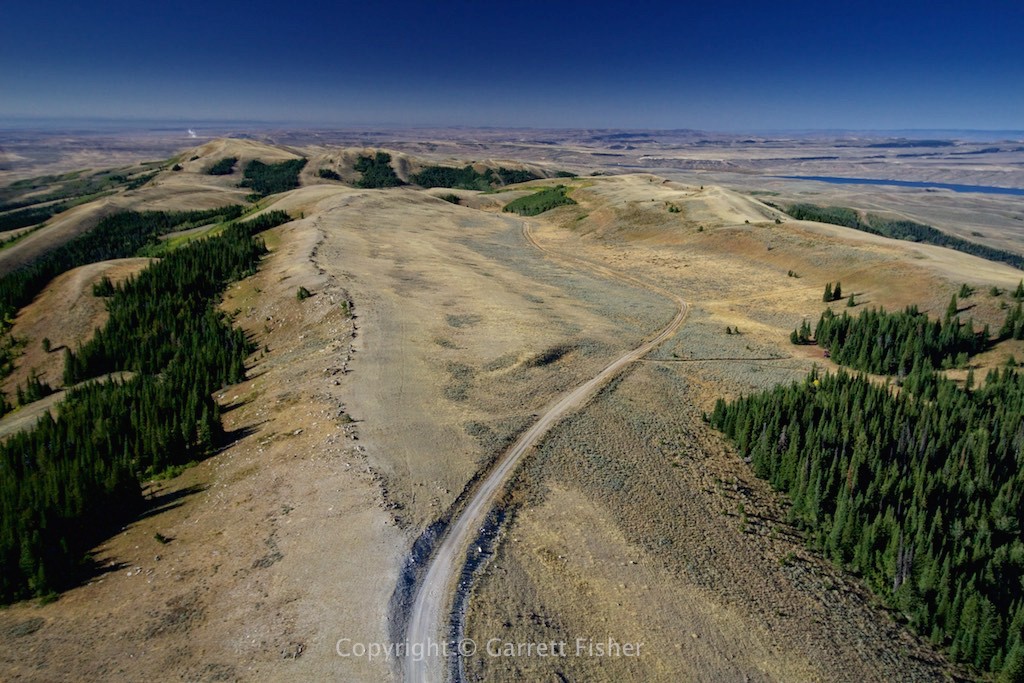 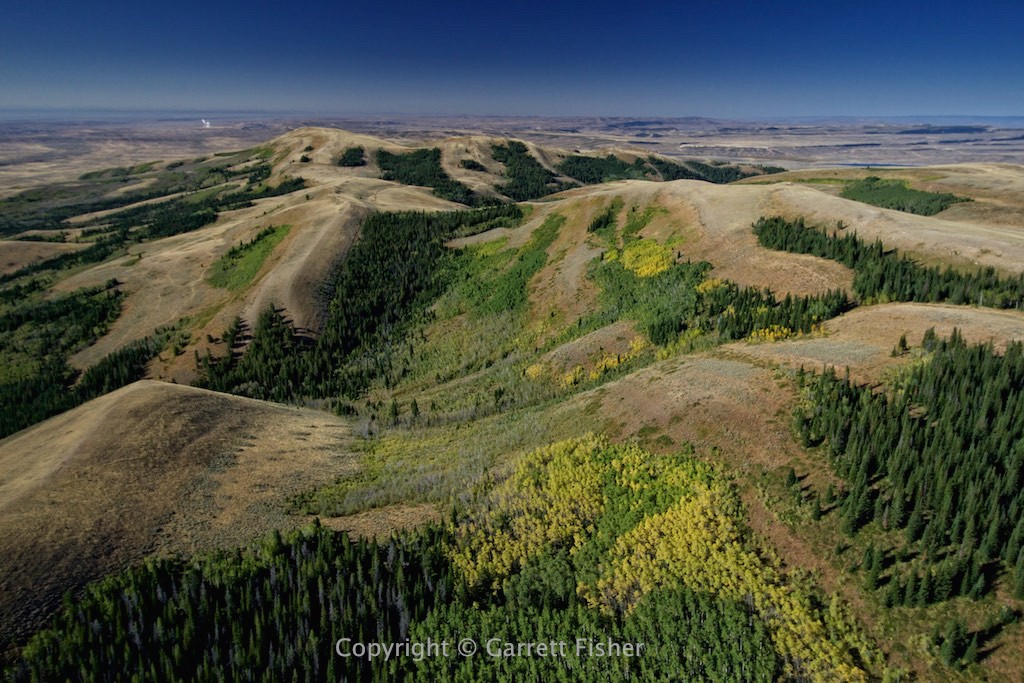 Some sort of foothills to Uintas Mountains 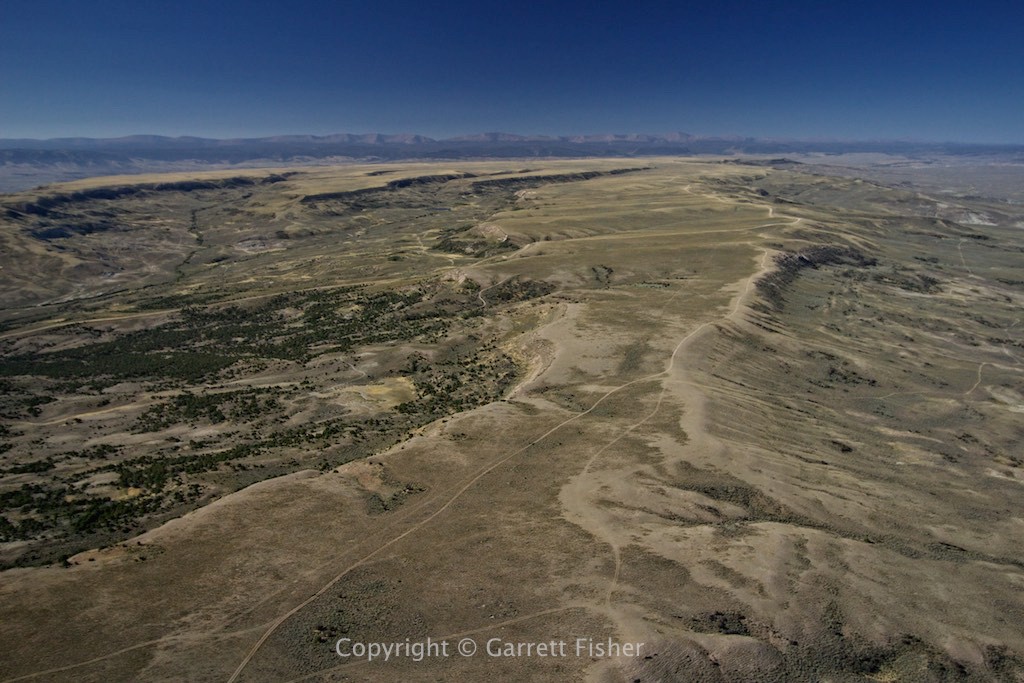 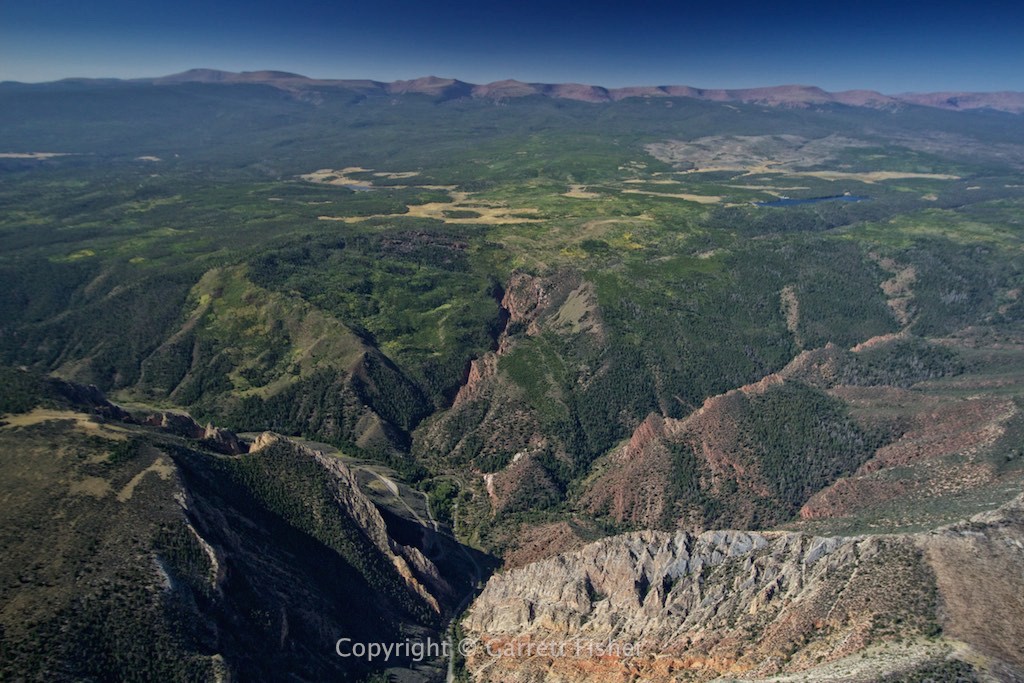 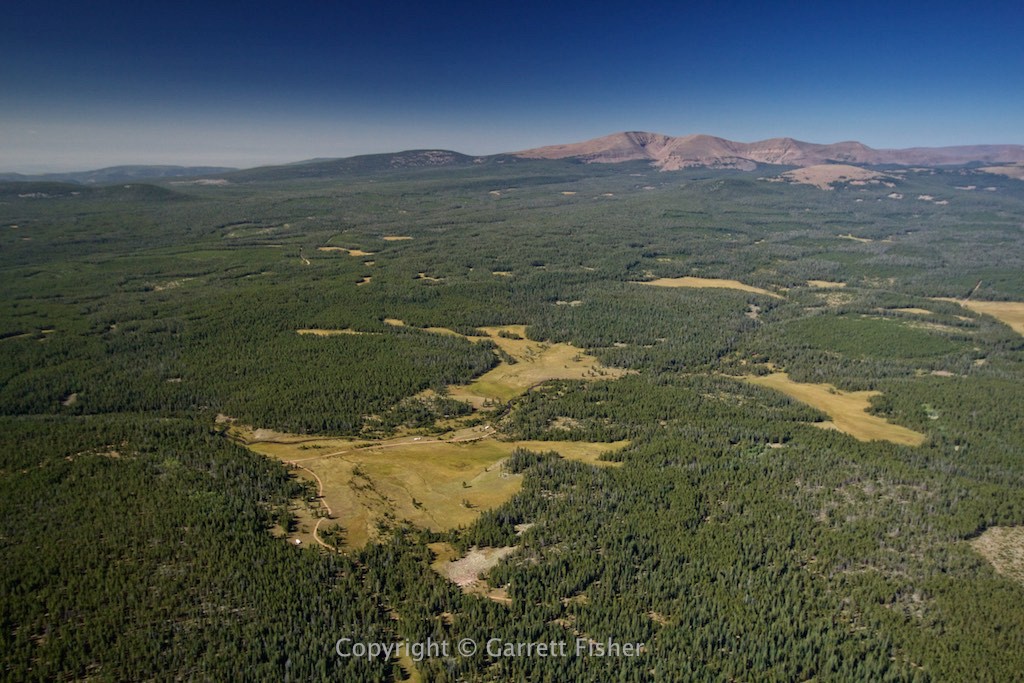 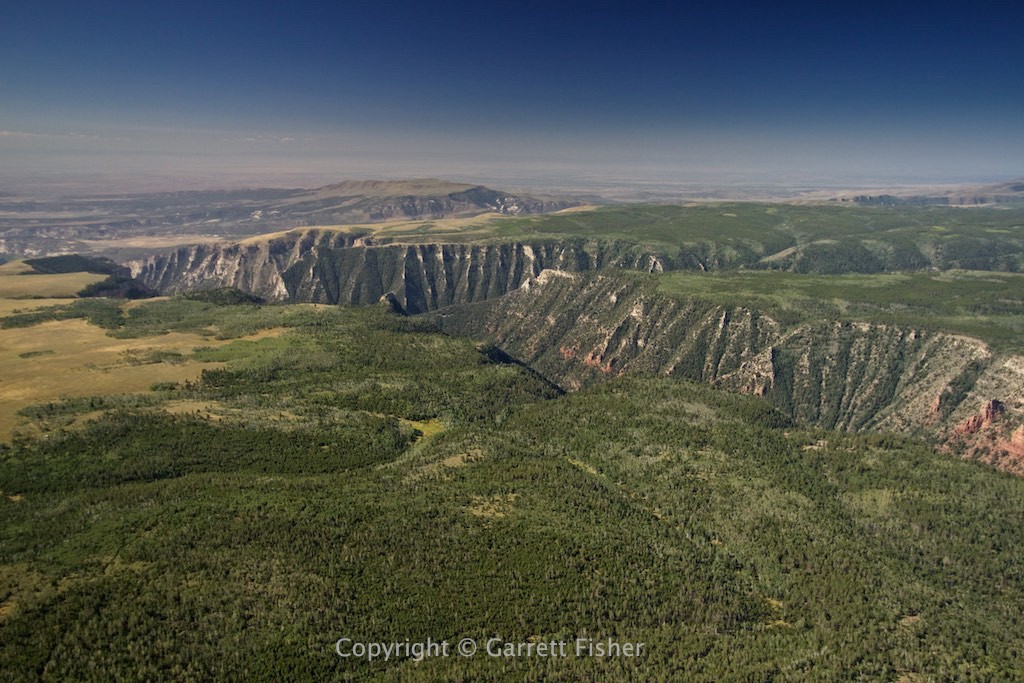 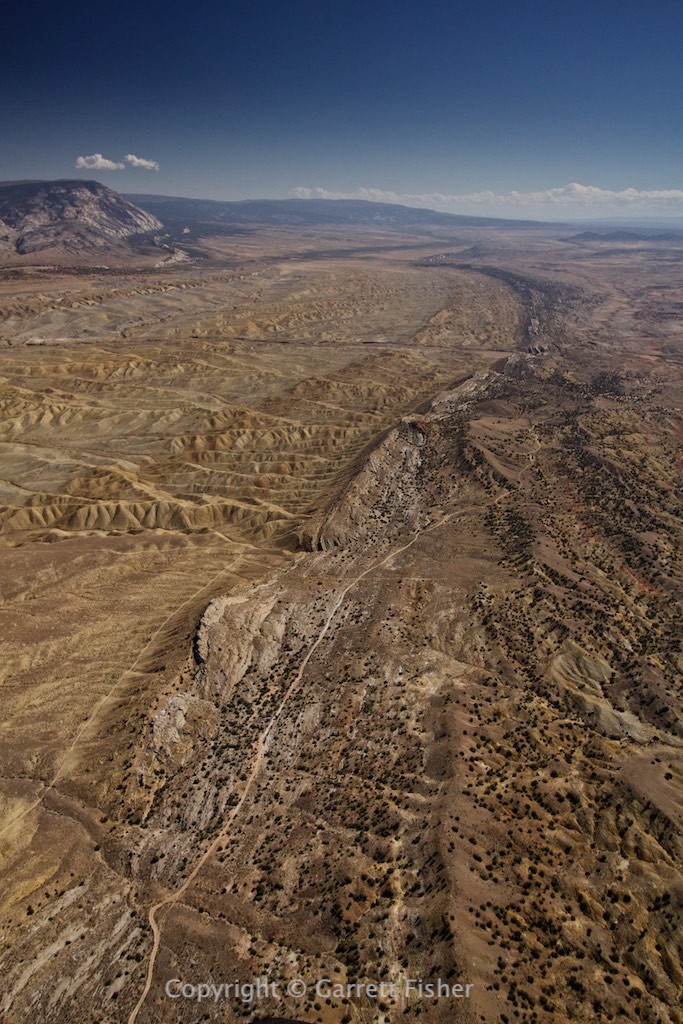 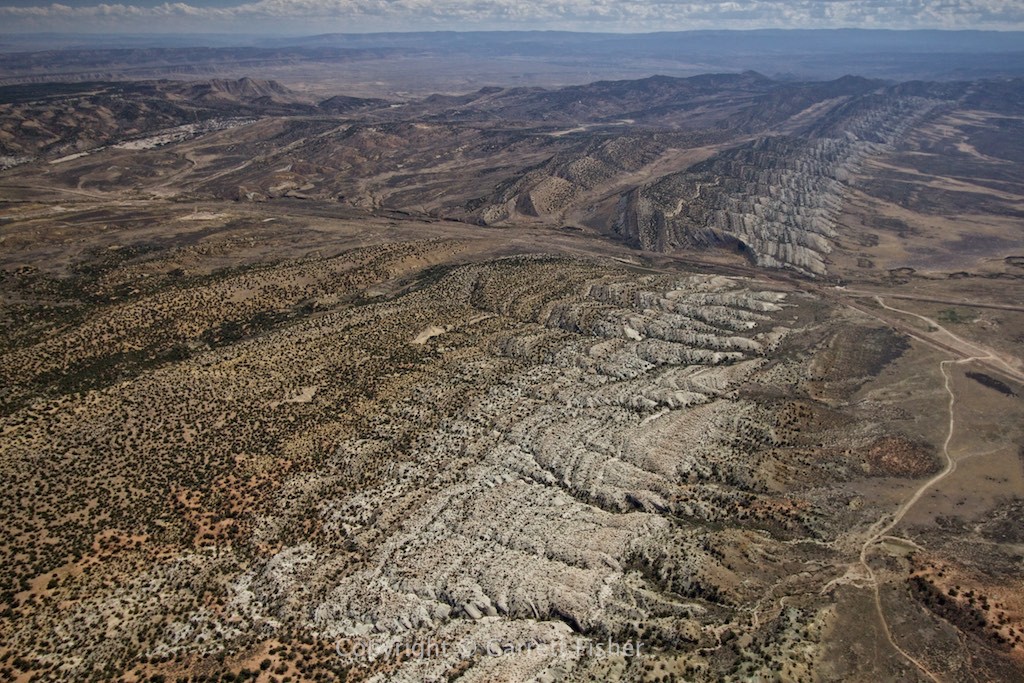 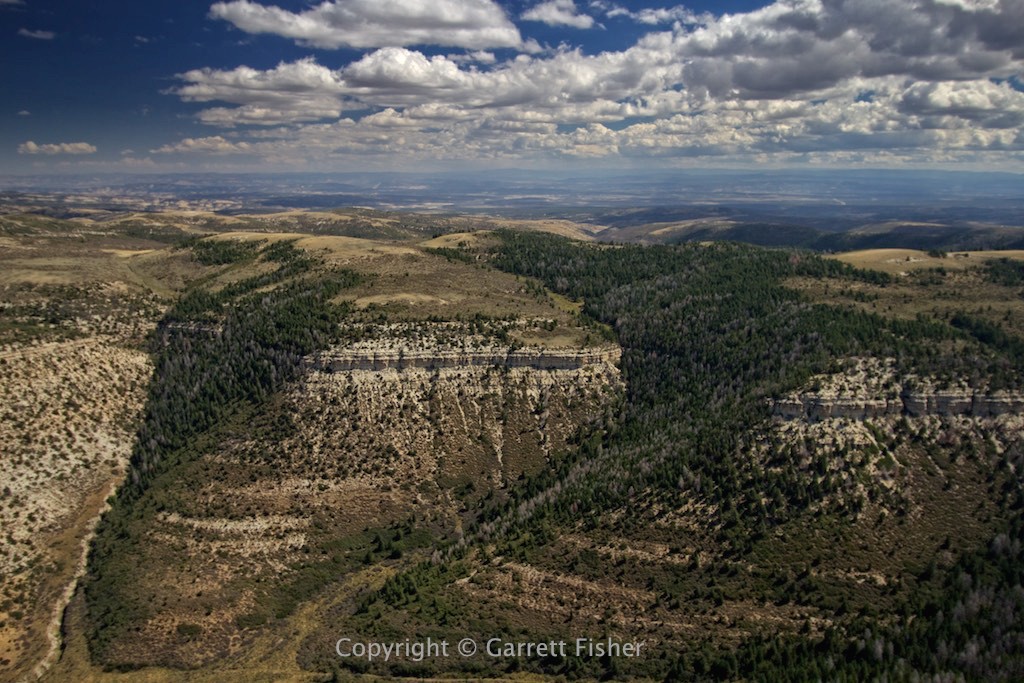 Sort of reminds me of West Virginia…..in a bad kind of way 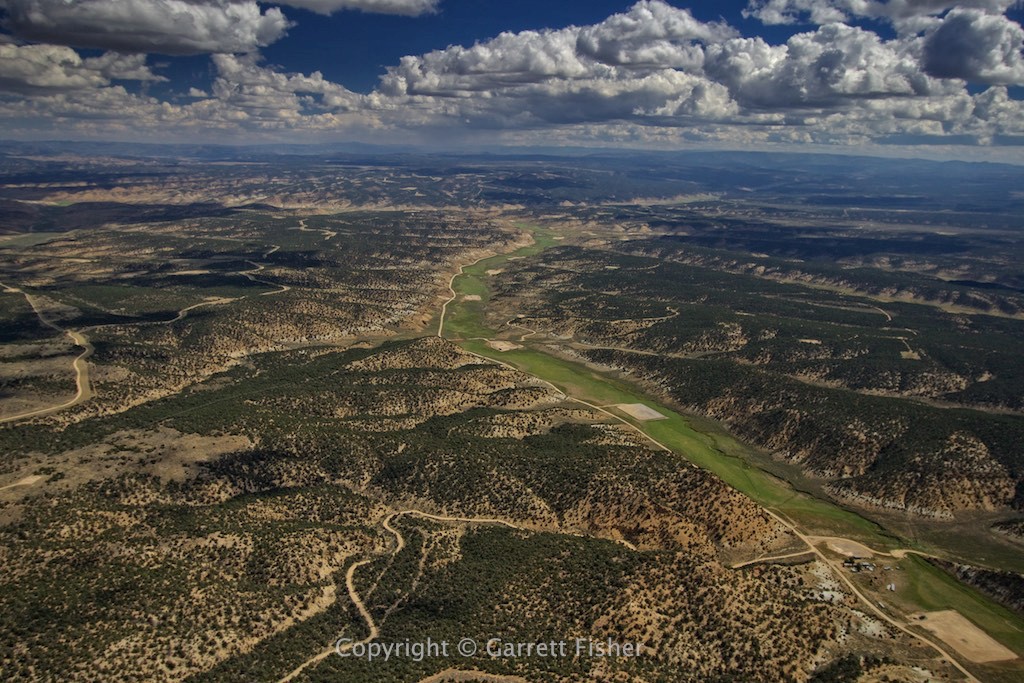 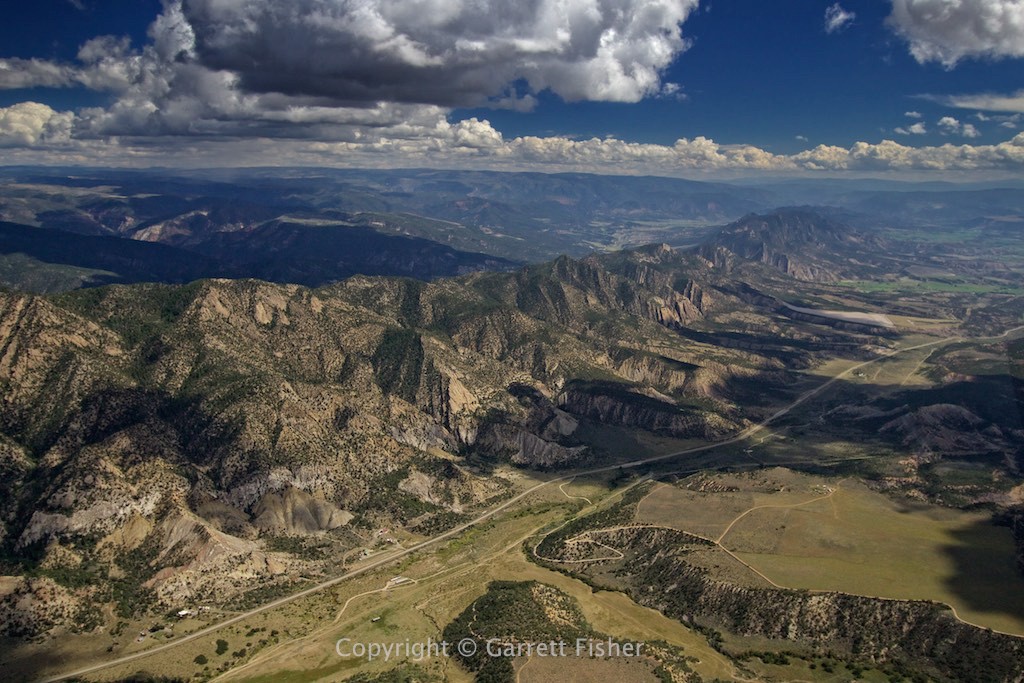 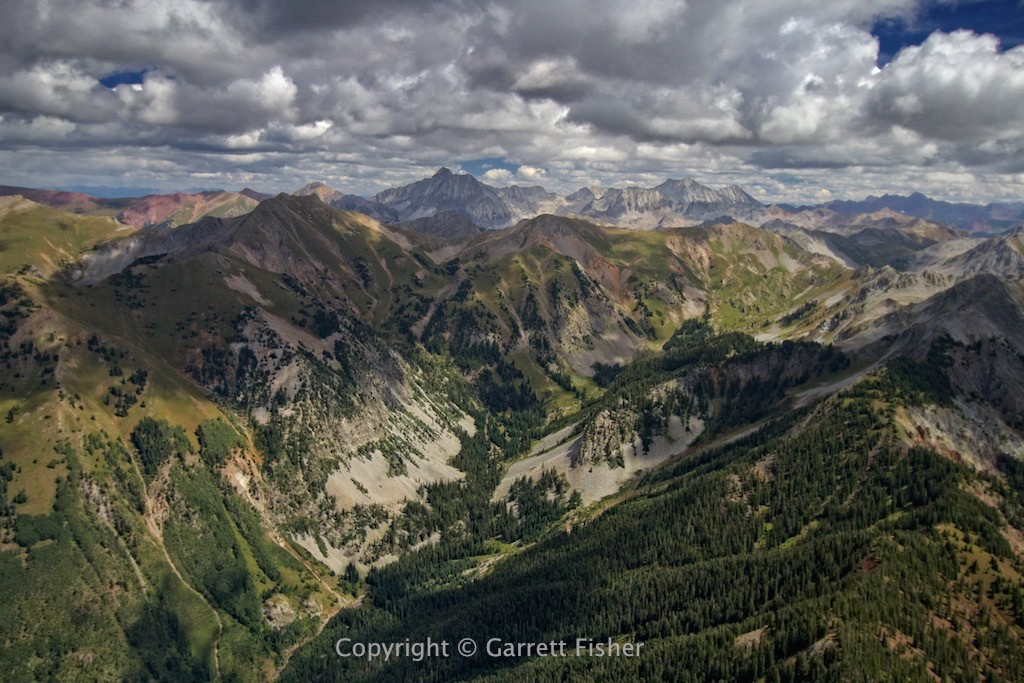 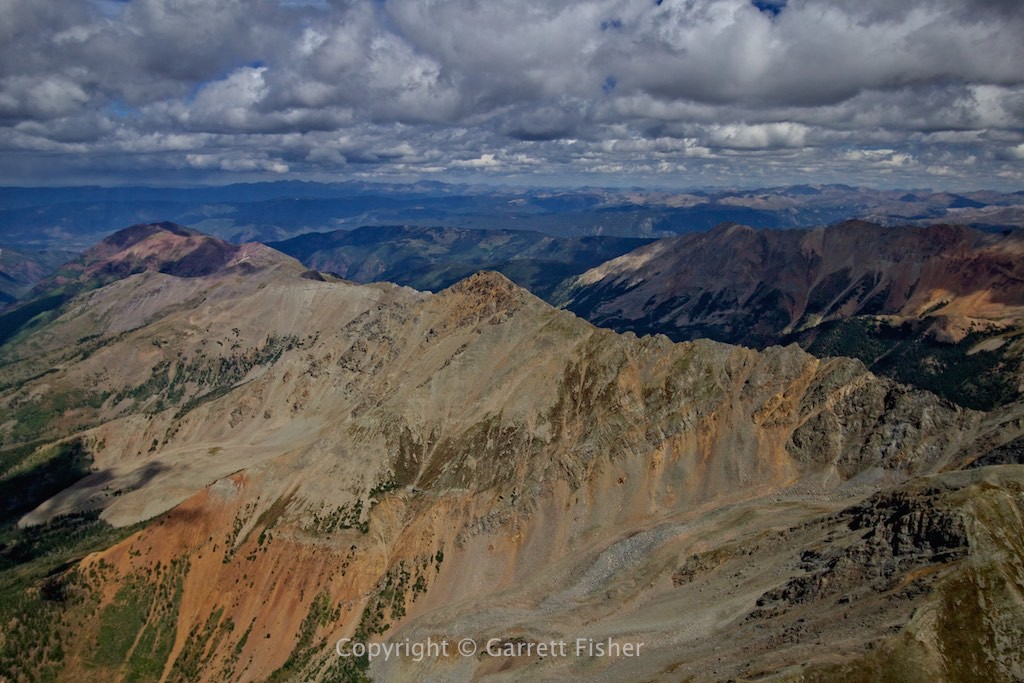 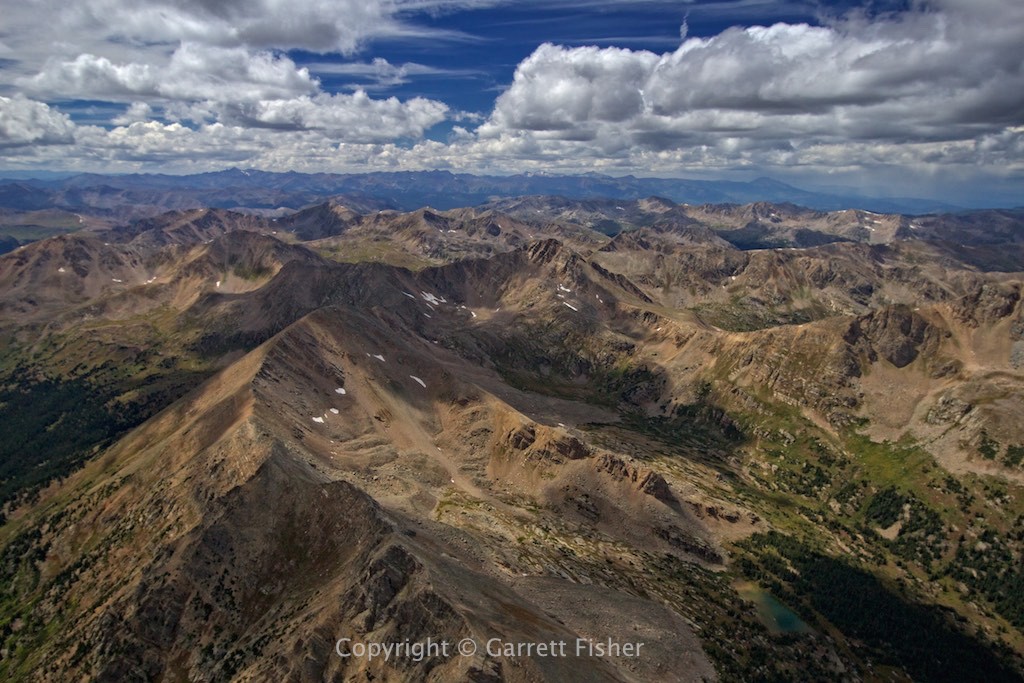 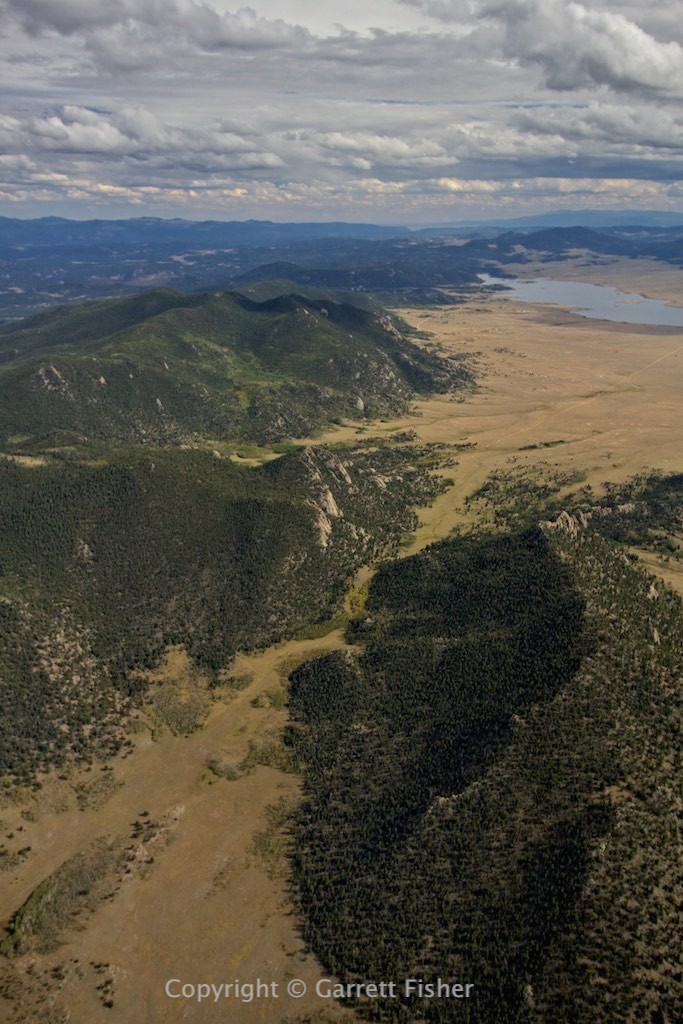 Showers brewing after Pikes Peak. Salt in the wound. 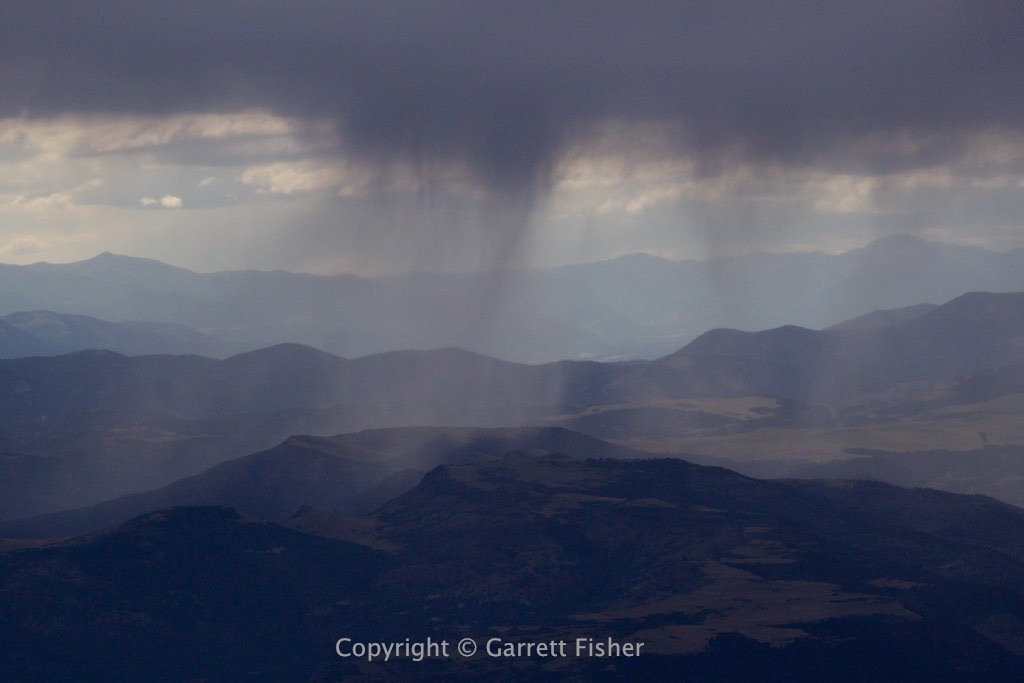 Foothills looking south toward Pueblo, CO. I suppose this is not ugly, though my mood at that point was. 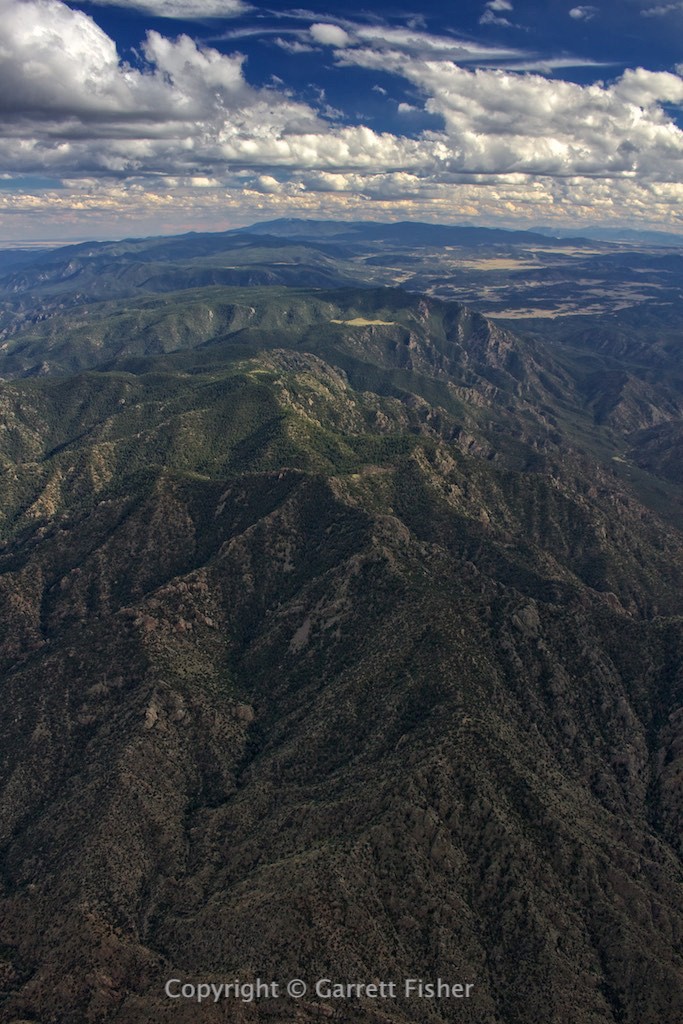 San Luis Valley. Makes so much sense that I would encounter severe turbulence here. I seriously was wondering if my aircraft is capable of generating its own turbulence or if someone had attached a giant quilt to the rudder. 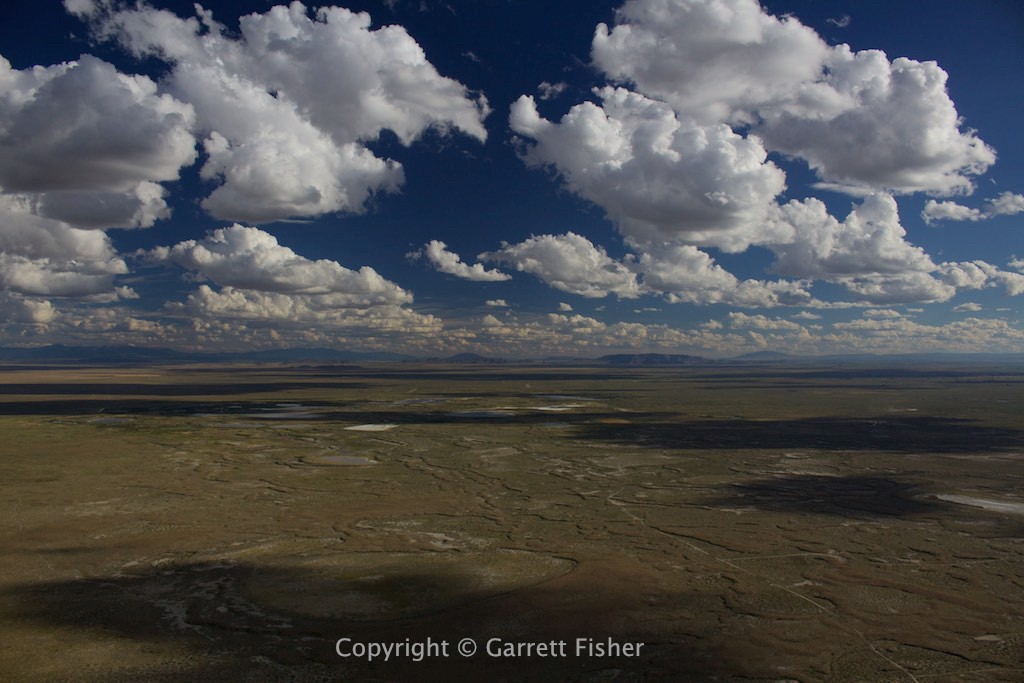